The Cardinal boys’ basketball team recovered nicely last night after their disheartening loss at Fergus over the weekend. They hosted a young (and upcoming) Sartell Sabre team and came away with a workmen like 60-51 victory. Seniors Parker Giroux (No. 5 on scoreboard) and Dan Gorghuber (No. 41) led the way for the Cards with over 20 points each. It was the last game for what surely must be the last of the snowbirds – Gretchen and Don Nelson are off to California this week. The Hoymsters were also at the game – as well as Luella and Otto, of course.

Sitting at the game with Don (who played for Wheaton in the mid-50’s), Dennis Kalpin, and Tom Anderson, we reminisced about the good ole days, as good ole guys are wont to do. I brought up the name of Hal Haskins, by all accounts Alex’s best ever basketball player, who pre-dated us all. So I found a couple of websites highlighting Mr. Haskins career, including being a 2nd-round draft choice of the Minneapolis Lakers (was it during the Haskins’ era that Luella and Otto took a cab from Alex to Williams Arena for the state tournament?): 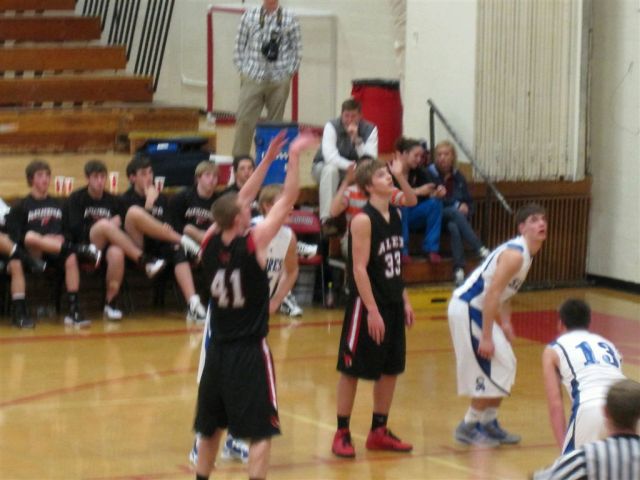 [Gorghuber at the line – Cards made their free throws down the stretch.]

Driving home after the game, the Cardinal boys’ hockey game at Willmar was on the radio. Dave Harris announced the girls’ hockey team had beaten Willmar earlier, 4-1, ending their long winless streak. Wa-hoo! Claire Illies had two goals (was shooting hoops with her mom earlier that day, doing my background research*), and Alia Kopischke and Rachel Finley also scored. Dave announced the swimming and gymnastics teams also won that night. So, now it was up to the boys’ hockey team – it was 2-2 in the 3rd period when this reporter called it a night. This morning I learned they lost 4-2 – those other Cardinals are in 2nd place in the conference.

[Still searching for an ID here – don’t know the source of the photo (except it was in the Obert family archives), but it appears to be Noonan’s Park, c. 1950’s?]

The staff photographer has posted his doings from several venues. They will be the subjects of a follow-on article.

[* Continuing a recent hot streak, this reporter made 10, then 18 free throws in a row, and is thus considering teaching a continuing education class in that regard – fingertips, stroke, follow through along the intended flight path, and hope it ends up within the vicinity of the basket.]