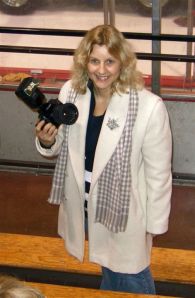 Due to a continuing demand for complete and high quality journalism – OK, mostly as a result of multiple competing venues – this blog site has had to take on additional staff. Friday night, while existing staff felt bound to cover the girls’ basketball against Little Falls [Editor’s aside: You may recall the report on the game indicated our fans’ appreciation for the Flyers. Additional staff research discovered that while the Cardinals beat them twice by well over 20 points, the Flyers played the other conference juggernauts, Fergus and Sartell, to very close games.], there was a major alumni gathering taking place in St. Cloud the very same night. Accordingly, . . .

Sue “Scoop” Justice was put on the payroll and immediately dispatched to the Granite City. “Scoop” was sent to cover the Gustavus-Adolphus – The College of St. Benedict women’s hockey game. The Gusties feature “Scoop’s” daughter, Danielle (now a junior), in goal, while freshman Ally Nielsen is a starting forward for St. Ben’s. What they have in common, of course, is that they were teammates on Alex’s 2008 state championship team. Also “in town” that day from that team was Ashley Holmes, whose North Dakota Sioux were playing at St. Cloud State. The following photos and captions are “Scoop’s” initial contribution to the Alex sports blog [Editor’s note: While “Scoop” is a noted photo-journalist, she is also noted as the mother of Danielle “Roadblock,” the spouse of Teddy Hockey, and the daughter of Jerry Hockey]: 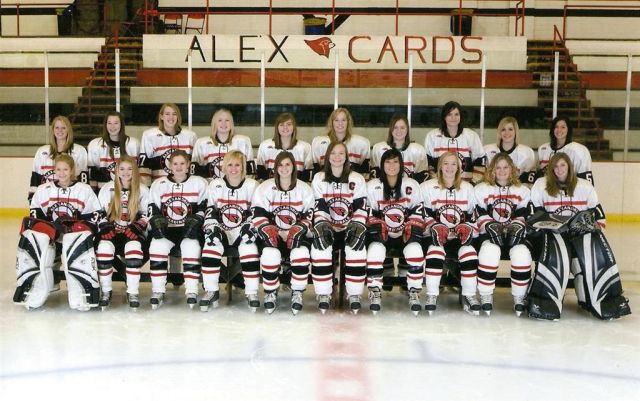 [Before “Scoop” begins, a recently obtained photo of that 2008 team was submitted by another hockey mom, Marnee’ Herd, also a part-time stringer for this site, and whose daughter  Shanee’, a sophomore, is a 4-year starter on defense this year.  Of those mentioned in this article, Danielle is sitting far right, Ally is standing 5th from left, Ashley is sitting 5th from right, and Shanee’ is sitting 3rd from right.] 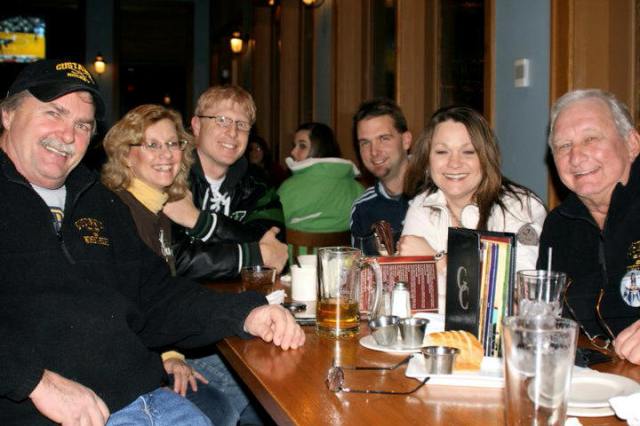 We met up with Ryan and Jodie Houfburg, parents of Ashley Holmes, at Granite City Brewery in St Cloud before the game. Ashley and her UND team were playing SCSU at the same time as Danielle and Ally’s teams were playing over at the MAC.
L-R: Ted, Sue, Ryan, a friend of Houfburg’s, Jodie, and Jerry. 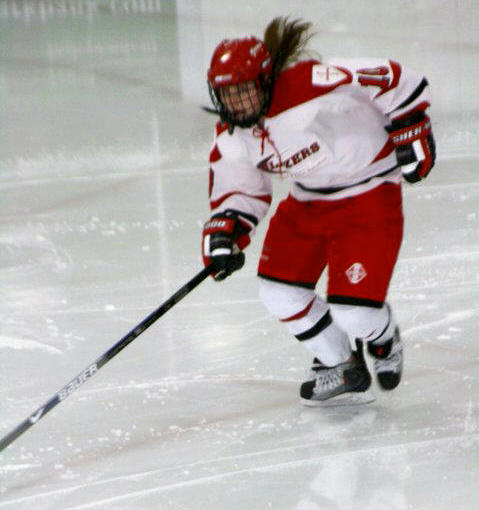 Ally, #10 for St. Ben’s Blazer during the first period. The score remained 0-0 until less than a minute left when the Gustie’s puck finally hit the back of the net. Shots were GAC 17, CSB 4. 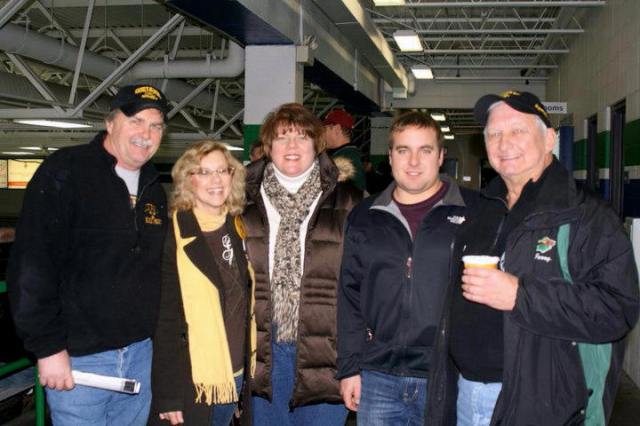 We reunited with Jeanne Nielsen and her son, Josh, between 1st and 2nd periods. Mitch was away on a business trip. 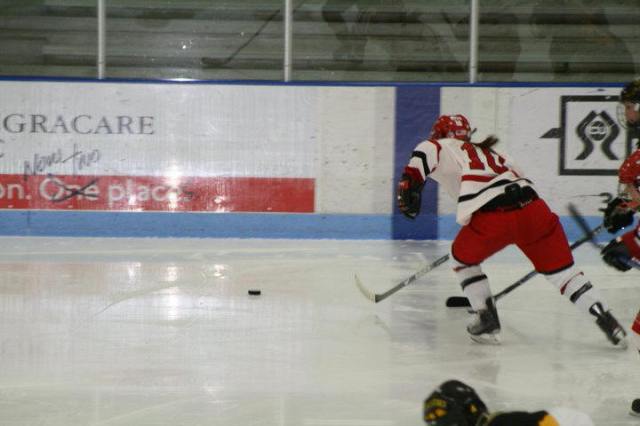 Ally demonstrates why she is on the Blazer’s offensive first line. 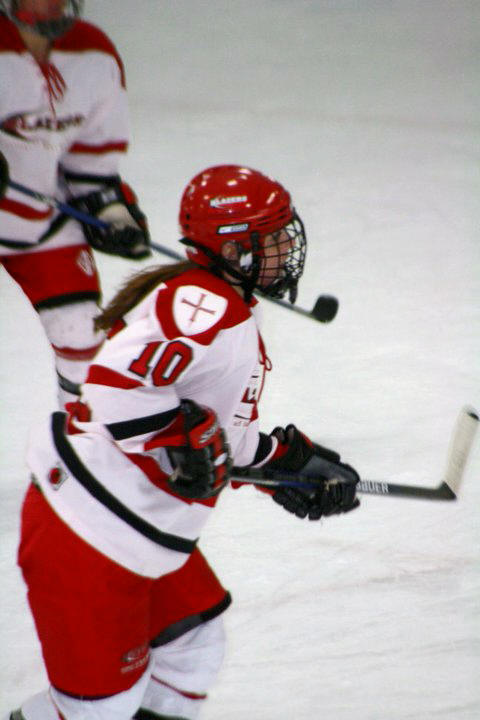 The third period started with the Gusties ahead 3-0. Five minutes later Ally was credited with an assist on the only goal, a breakaway, on Danielle. 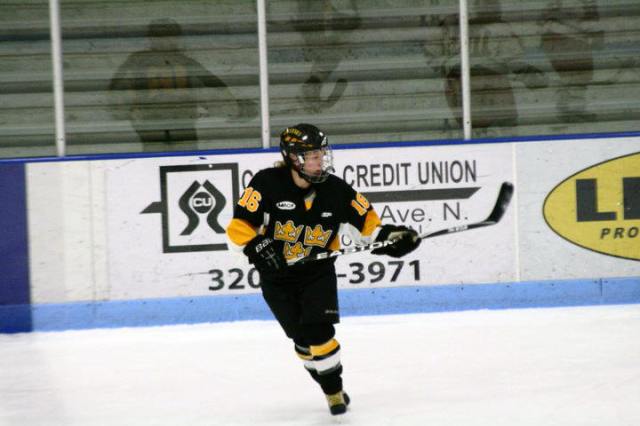 David’s [“Scoop’s” son] girlfriend, Kelsey Kennedy, no relation to JFK, is on the Gustie’s first line of defense. 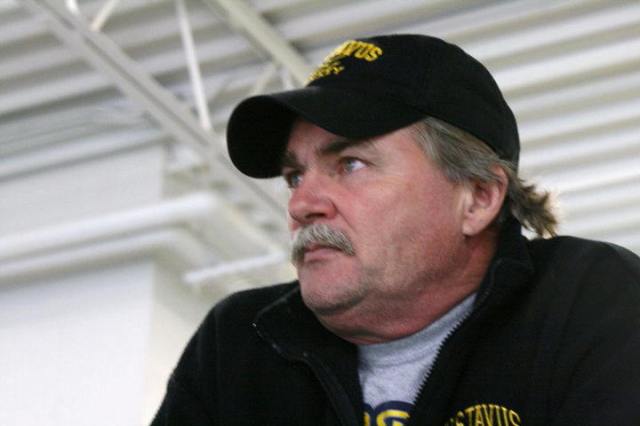 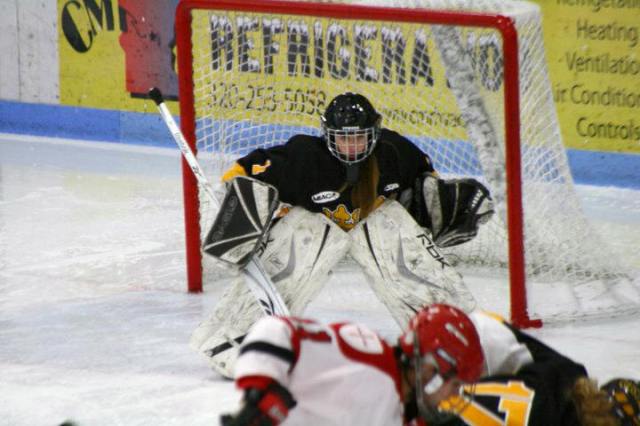 Danielle in ready-for-anything-hit-her-way position had only 8 shots on her thanks to the incredible defense and the spectacular offense teammates in front of her.  [OK Mom, and she’s pretty good, too!] 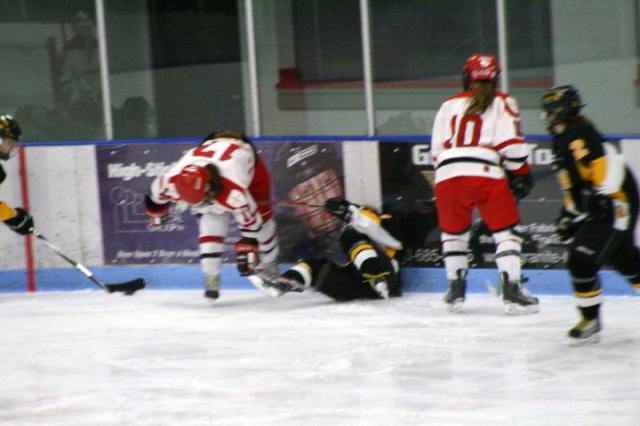 And then it got ugly. The Blazers racked up 6 more penalties in the third period. The Gusties scored three times on their power plays. 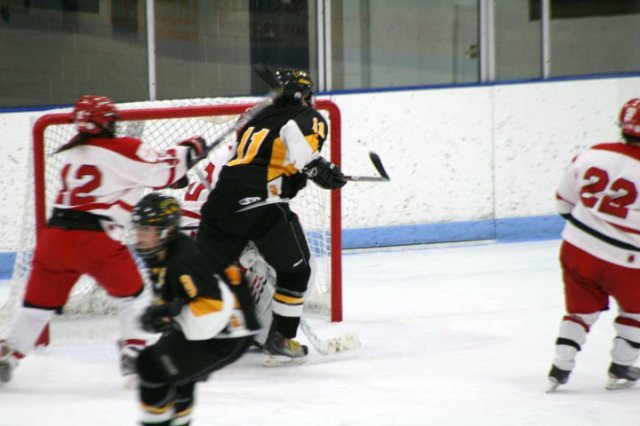 Another penalty.  [Good shot though!] 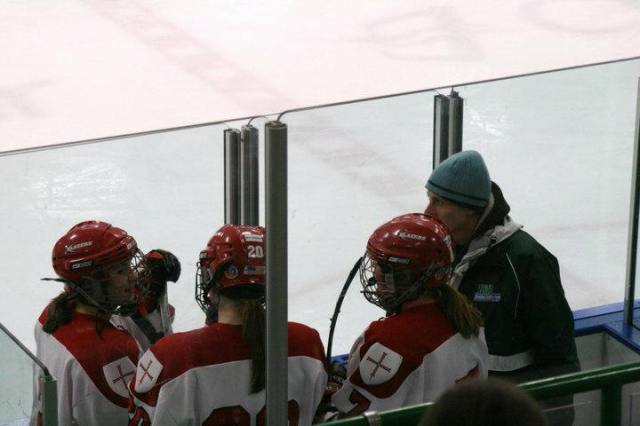 My son, Kevin, worked the time clock and the Blazer’s penalty box. He was kept busy as they had 12 penalties. I wonder if he got any phone numbers? 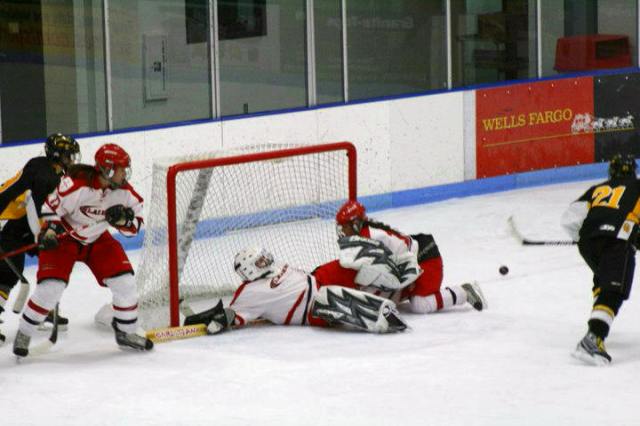 Blazer’s goalie suffering from having 60 shots on her. 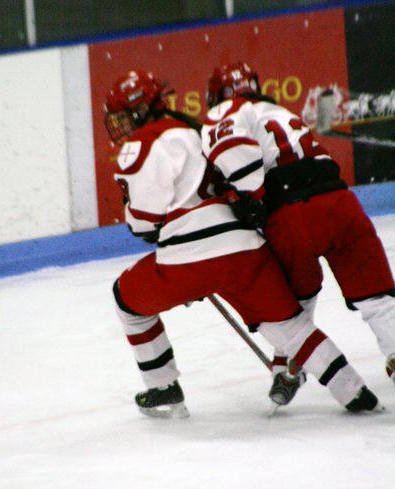 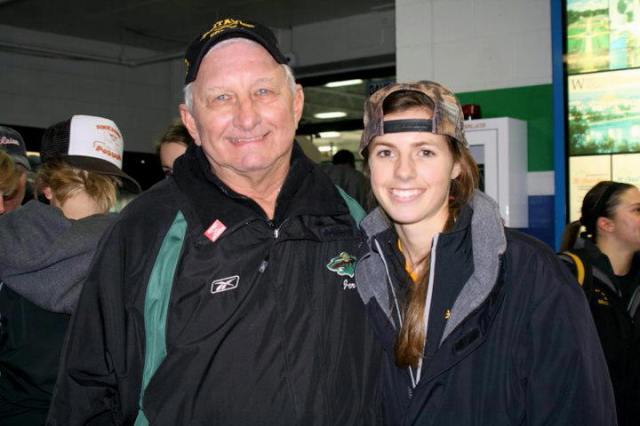 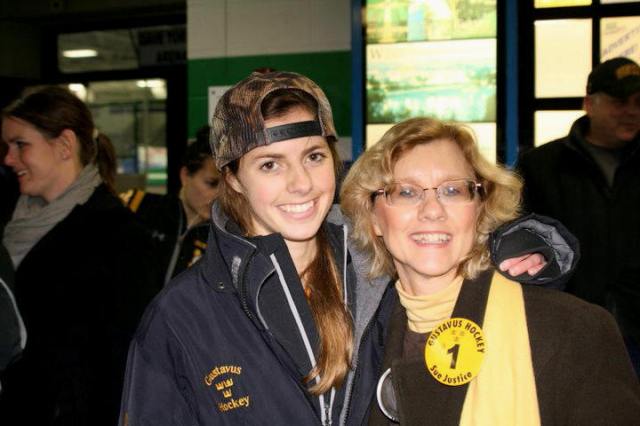 Posing [Roadblock] with her Mom [Scoop]. 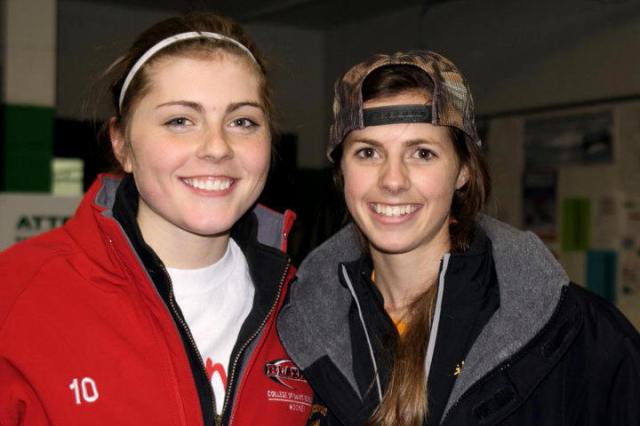 Ally Nielsen and Danielle after the game. Win or lose they are still great friends.