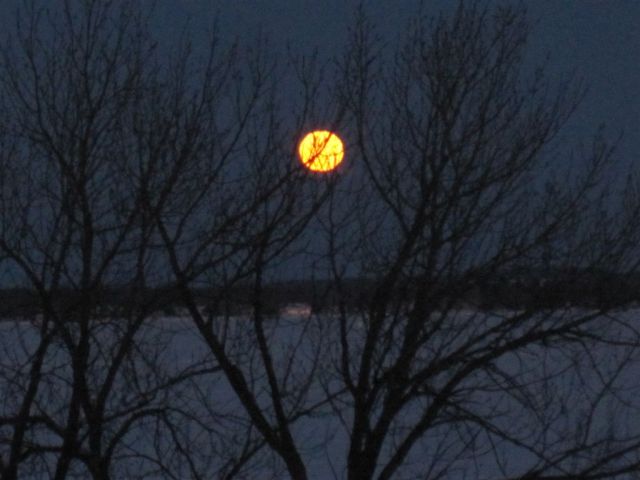 [“Moonrise Over Beautiful Lake Darling”  – January 19, 2011.  OK, this has nothing to do with the following article.  The supervisor just happened to point out it was there.]

The boys’ hockey team beat River Lakes 4-2 at the RCC last night. I didn’t go. The supervisor is under the weather so I felt compelled to remain at home with her and be a general nuisance. We did watch The Hurt Locker on On Demand, so now we understand why it won the Oscar for best picture. I have no particulars on the game, particularly.

The girls’ hockey team ventured to River Lakes last night and came away with a 3-3 tie. The Cards had a 3-1 lead after two periods. Earlier in the year, they owned the 3rd period, but during this losing streak the 3rd period has not been so good. They just have to learn how to win again. I am attaching recently received photos of the 2008 state champs for inspiration. They should use it as such because they are an overall better skating team than the championship team. Nevertheless, a tie, on the road, against a conference and class AA opponent isn’t chopped liver (or glazed meat loaf with garlic mashed potatoes and gravy, or corned beef and cabbage with soda bread, or lemon meringue pie, or a reuben with fries and strawberry pie, or . . . errr, please excuse me, I’m trying to diet and these words just leapt into my head).

The road trip that could have been – with the supervisor in good health, with clear roads, with traveling partners for a pre-game nosh at Anton’s – was to Sartell to see the unbeaten Sabres girls’ basketball team host our Cards. Sounds every bit as exciting as I knew it would be. Sartell has a 6’5” player and a couple of good 3-point shooters. But they apparently were every bit as discombobulated (now there’s a word you don’t see in print everyday) by the Cards defense as everybody else. The game went into OT. Lauren Trumm, our do everything player, fouled out so did not play the end of regulation or the OT. Coach Kohler said there were three calls against “LT” down the stretch that even left the Sartell fans scratching their heads. Well, you can tell by the those last two sentences the Cards lost 55-53 – still a great showing against an undefeated and ranked (2nd in the state?) team on their court. From the St. Cloud newspaper (big game for Ms. Haar):

“They (the Cardinals) are just so long,” Sartell head coach Katie Martin said. “They tip everything and they’re so active. Their posts are really active and tough. It really took us a while to adjust.”
Alexandria led 14-6 midway through the first half. That was the biggest lead either team would have. Sartell’s biggest lead was four.
ALEXANDRIA — Ali Haar 17 (14 rebounds, 6 steals), Joie Warnes 6 (5 rebounds), Cara Wood 4 (10 assists, 2 steals), Sam Trumm 6 (10 rebounds), Lauren Trumm 12 (6 rebounds, 4 steals), Whitney Gesell 8, Brianna Ebert 0. 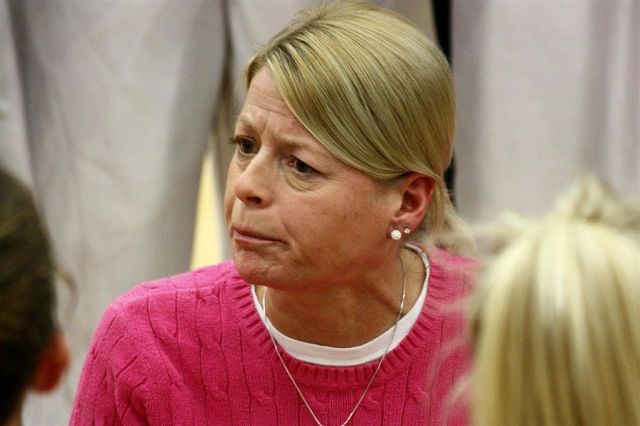 [Coach Kohler, from the Trumm files, @ Willmar on the 4th.]