[OK, we’ve apparently aready sped by any port activities and are on the road to Antigua.  Puerto Quetzal is Guatemala’s largest Pacific Ocean port. It is important for both cargo traffic and as a stop-off point for cruise liners (Wikipedia).] 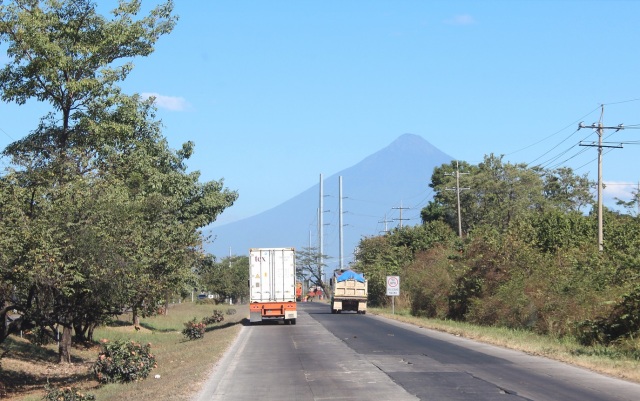 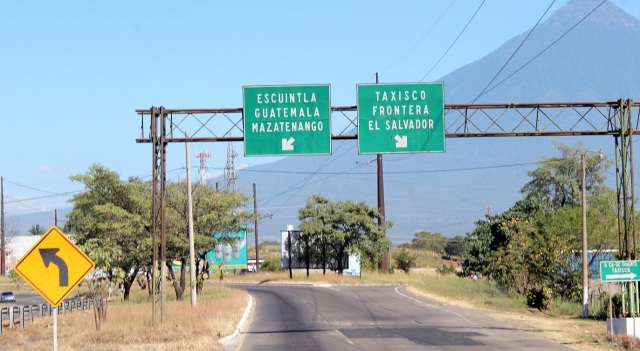 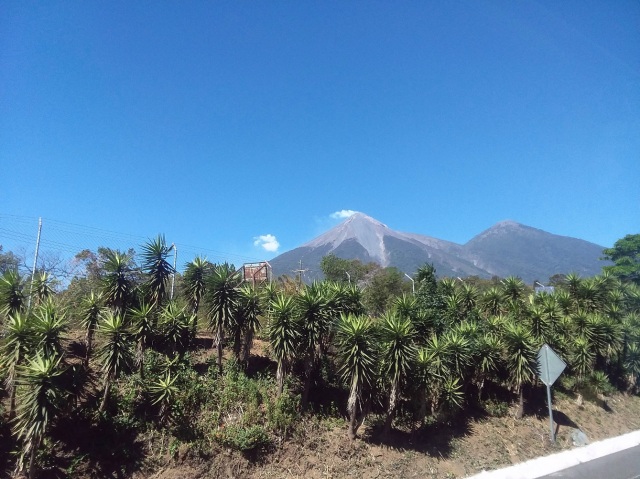 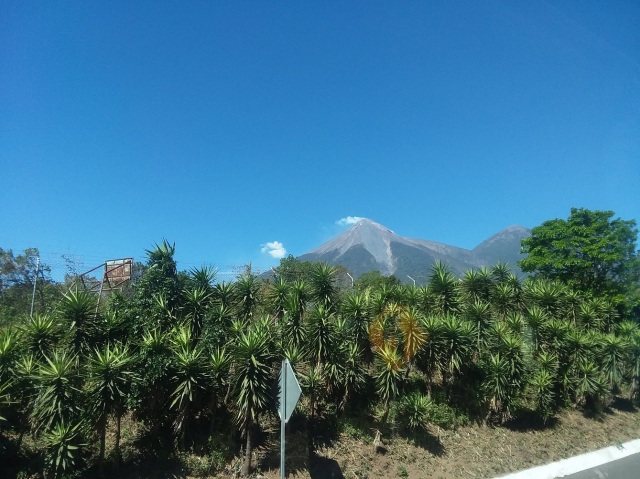 [Guatemala has 33 volcanoes, of which three are active.  The  Agua, Acatenango and Fuego volcanoes: are possibly the most photographed Volcanoes of Guatemala, these three peaks guard the wonderful colonial city of Antigua Guatemala (aroundantigua.com).]

[We thought these were volcanic vents from a distance.  They were actually small fires.]

[A peek here at the traffic – full blown bumper-to-bumper reflecting the holiday season.] 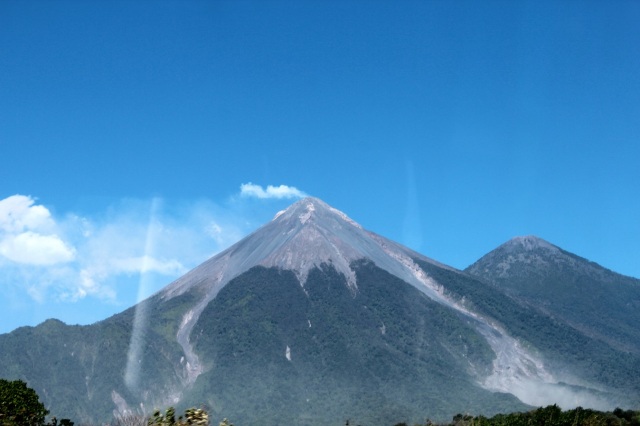 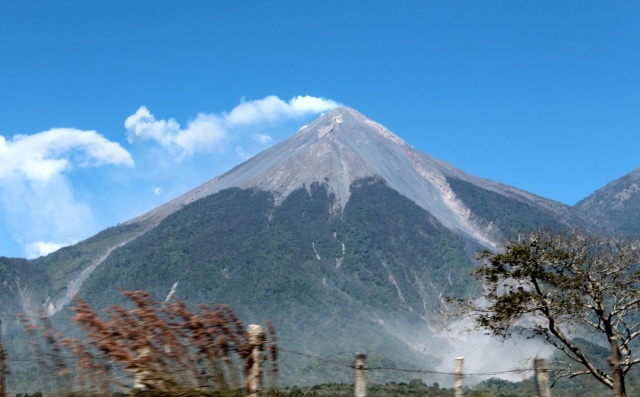 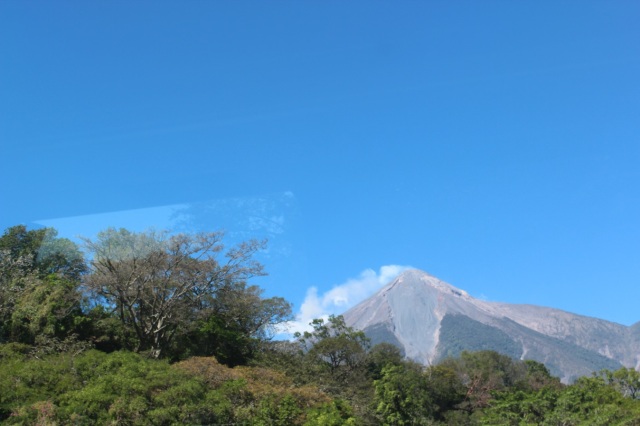 [Oy, took forever with this truck in front.  The trip from port to Antigua takes about an hour and a half, depending on traffic (of course) . . . ] 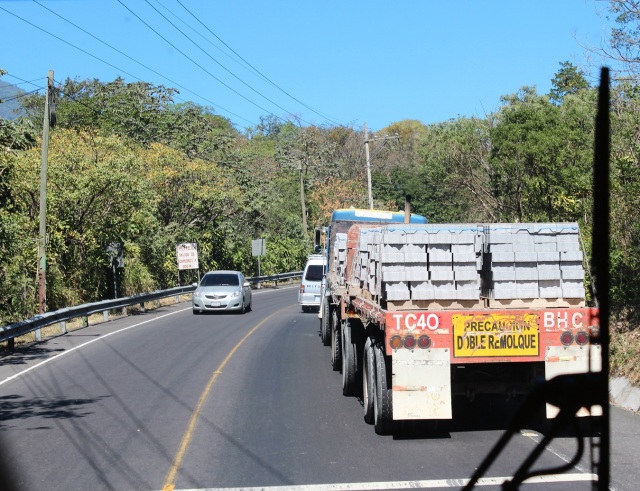 [Finally, an opportunity to pass.  With that monstrous load of bricks, he was going about 10 mph up the hill . . . ]

[Ken Kesey and his Merry Band of Pranksters at a supermarket?}

[Never pass up a volcano shot, here going through the back streets of Antigua . . . ] 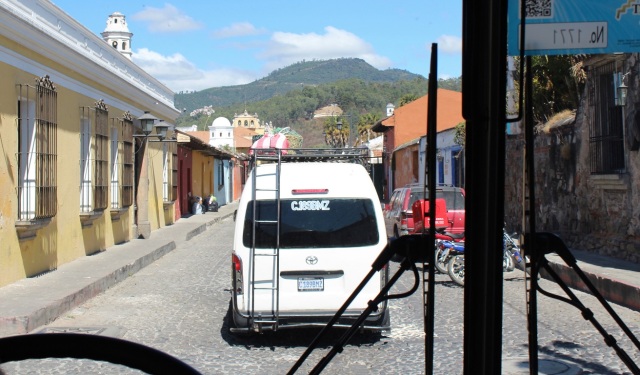 [Guatemala shares with Myanmar (formerly Burma) the distinction of being one of the world’s major sources of this fine stone.  Jades S.A., now Jade Maya, made the decision to re-establish a jade carving industry in Guatemala and opened its doors in the 1970’s and remains the largest jade operation in Central and South America.  Jade Maya is a totally integrated jade company founded in 1974 by archaeologist Mary Lou Rindinger and her husband Jay Ridinger. We mine fine jadeite jade which is found mainly in Guatemala and Burma, but valued throughout the world. The source discovered and used by Jade Maya, are the same used  by the Ancient Maya people of Mesoamerica. The jade is cut and polished in our factory by native Guatemalan workers who are recovering and preserving the carving traditions of their ancestors (jademaya.com).] 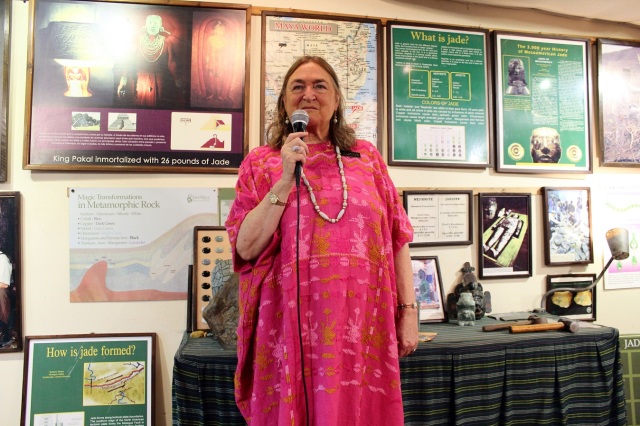 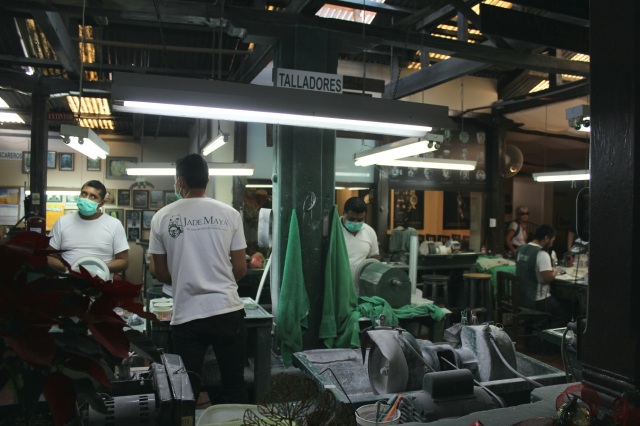 [Ms. Rindinger calls this large chunk of jade her “retirement account.”  If she said it’s weight or worth, both unlikely, I don’t recall . . . ] 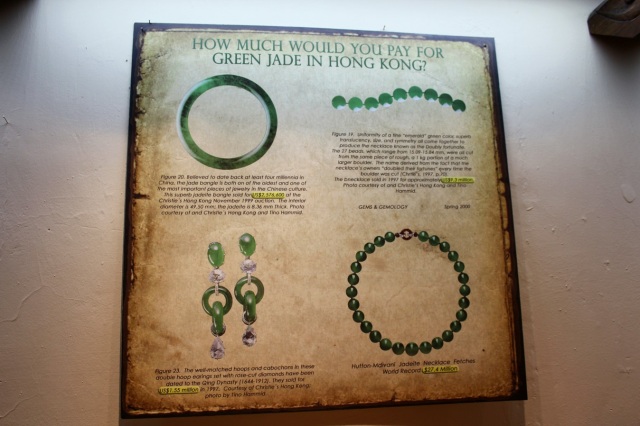 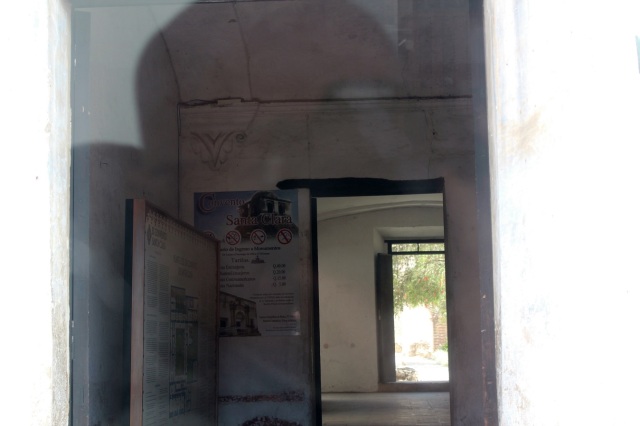 [Antigua is a city in the central highlands famous for its well-preserved Spanish Baroque-influenced architecture as well as a number of ruins of colonial churches. It served as the capital of the Kingdom of Guatemala. It has been designated a UNESCO World Heritage Site.  At the time of the 2007 census, the city had 34,685 inhabitants (Wikipedia).]

[The college courtyard – we were subsequently hustled out of here . . . ]

[Back to the plaza where “the joint is jumping.”]

[It’s a major tourist attraction which attracts the local vendors . . . ]

[I think it rather amazing that I have two high school classmates who go to Guatemala annually on separate missions . . . ] 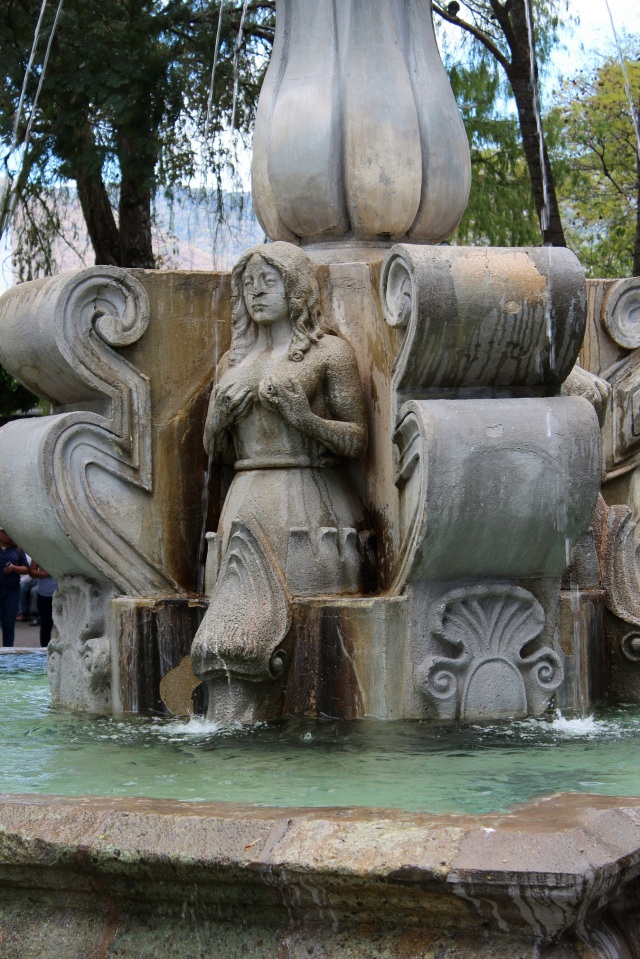 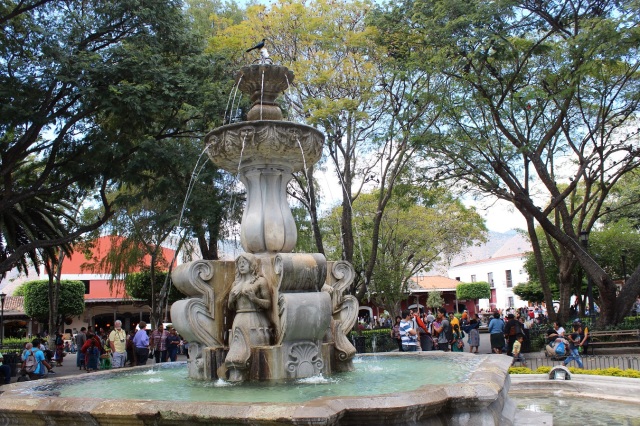 [I am at a loss to explain how this photo fits here?  Stuff happens?]

[Meanwhile, back at the plaza, the vendors have their eyes on the Super . . . ] 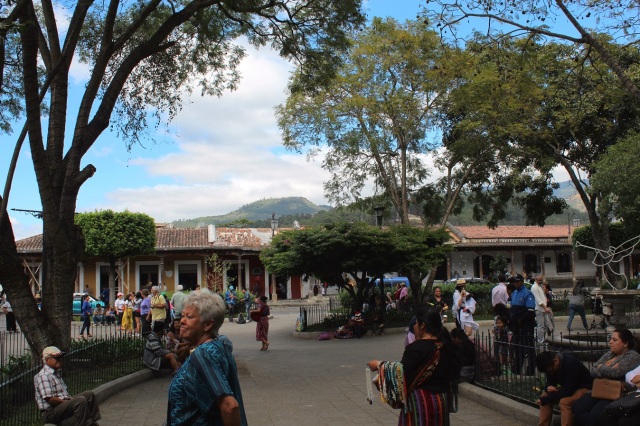 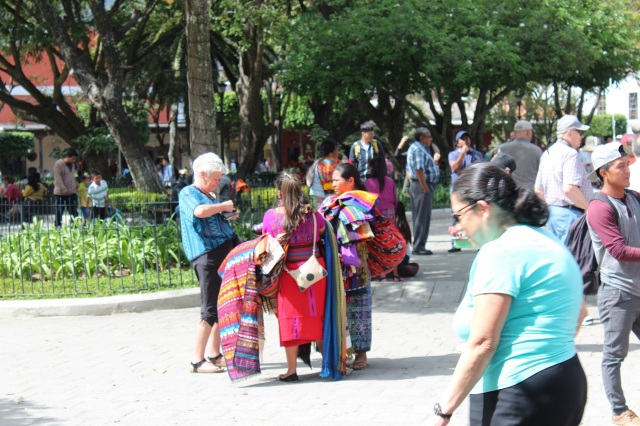 [The plaza where the following are located . . . ] 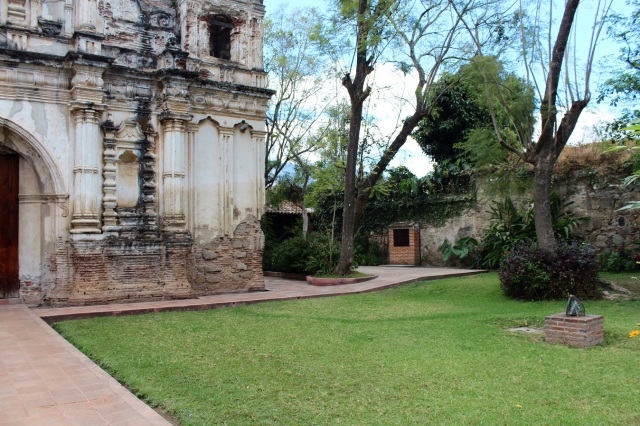 [The Chapel of San Jose el Viejo, a school is situated next to the ruins of the chapel of San Jose el Viejo (3 blocks away from the Central Plaza of Antigua).  The school building, used to be part of the church.  Around 1736 a modest chapel was begun in the Tortuguero District of Antigua.  It was intended to house the splendid statue of Saint Joseph, which was the work of the great sculptor Alonso de la Paz.  The little hermitage became the house of worship of the needy people of this populous district (sanjoseelviejo.com).]

[Back on the ship, it somehow seemed appropriate that we had a “volcano” for dessert.]

Cars will soon have the Internet on the dashboard. I worry that this will distract me from my texting.  ~  Andy Borowitz