Another Team to State!

Following in the fine tradition of the previous two weeks, where both the girls and boys hockey teams punched their tickets to the state tournament, the girls basketball team decided to join that caravan down I-94 with a section title . . .

[So inspired were we by the possibilities, that I actually deigned to drive all the way to the University of Minnesota, Morris, from which I then had to drive home, at night, in winter.  Give it a try sometime when you’re over 70!]   ]

[This is the neutral court site for the section championship game between the Cardinals and the Otters.  I believe I was here once before for a “Prairie Home Companion” program?] 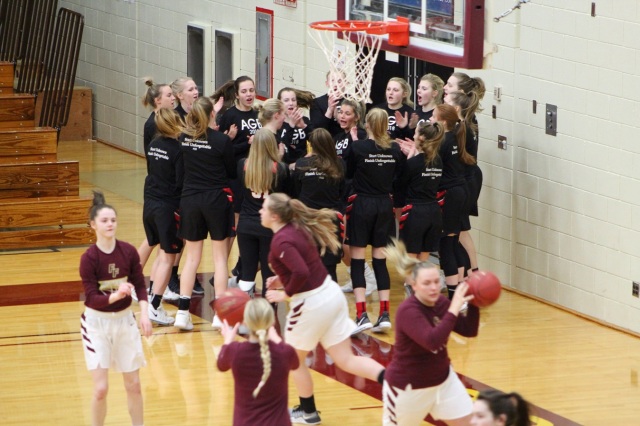 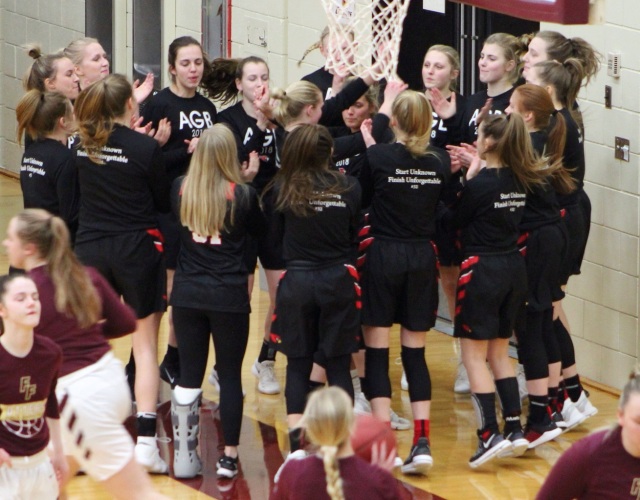 [Under the supervision of “The Leader of the Pack.”  Sheree Saxton is responsible for you all receiving the Cardinal Connection, a/k/a, a catalog of all the weekly things going on at or concerning AAHS . . . ] 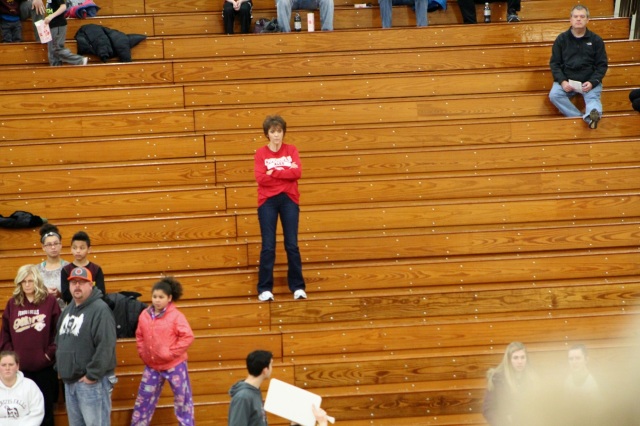 [Oh no, is that Kim Kardashian again?] 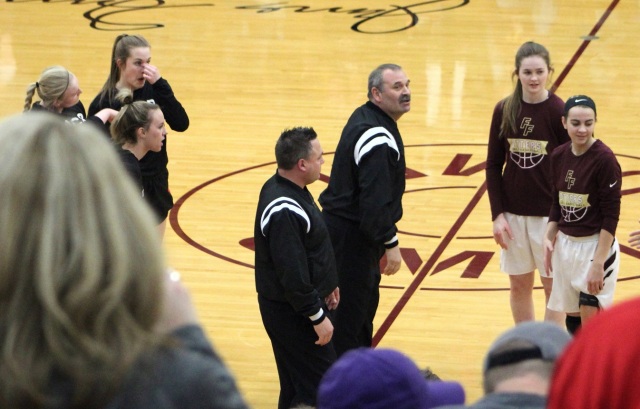 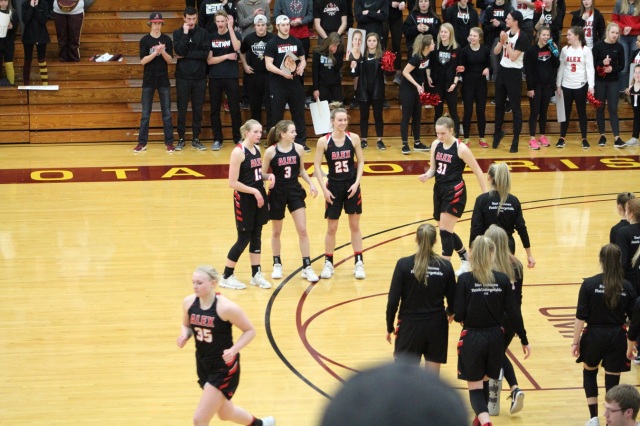 [Where are the Otters?]

[Here’s a little something you don’t see everyday – a double opening jump ball. McKenzie went up first, that tap lead to a tie-up, and then another jump ball with Ella. We got that tap.] 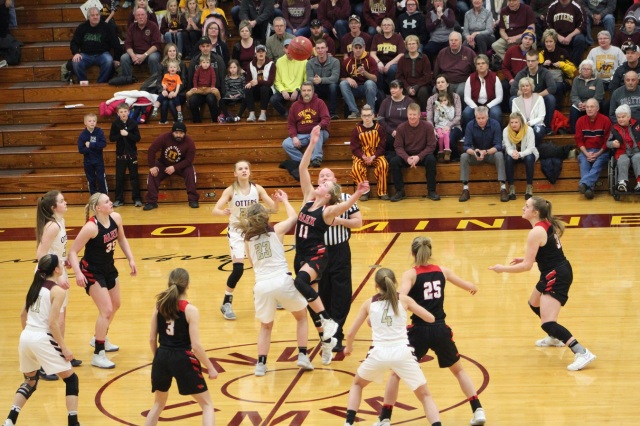 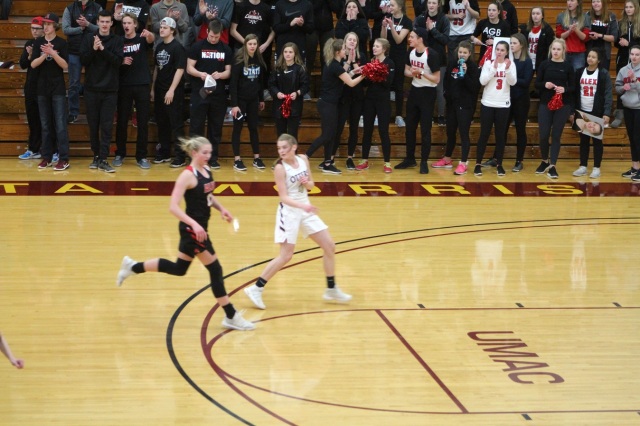 [I acknowledge memory lapses, but this is the first game I can remember where Kohler just had the team play a hard man-to-man defense the entire game.  No pressing, no trapping, no zoning, just in your face individual defense . . . ] 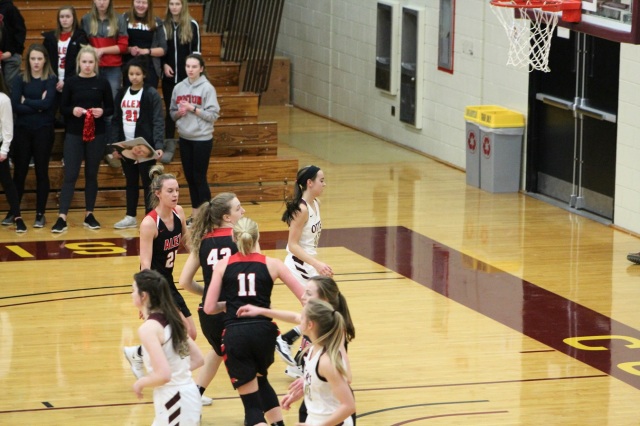 [They’re both 5’11, can play high or low, and are defensive specialists with their length.  In this game, Fergus is a shooting team, so nobody could ever be left uncovered.  Emma followed the Fergus star, the coach’s daughter Katelyn Strand, wherever she went, because if she had a hint of clearance she’d launch a quick ‘3’ . . . ]

[Our defense leads to such as traveling infractions . . . ]

[Did someone say defense?]

[In the 2nd half, Courtney at the line.  Our offense even more emphasized getting the ball inside – to score and/or get fouled.  I think Courtney made all her free throws . . . ] 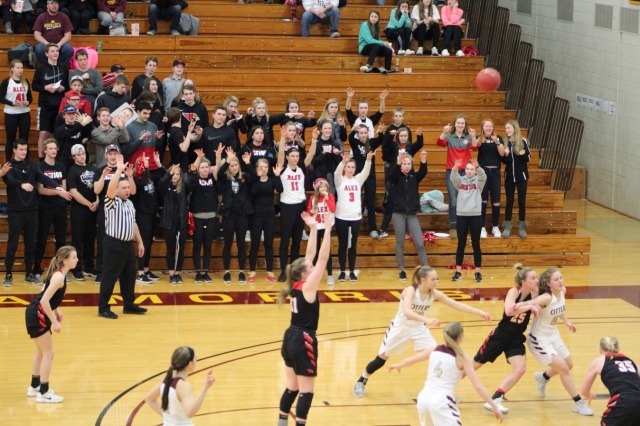 [McKenzie too.  Nevertheless, the Otters held a slight lead most of the way – they just never seemed to miss any 3-pointers . . . ]

[And then Kaye made her move.  When she steals a pass, she beats LeBron James down the floor for lay-ups . . . ] 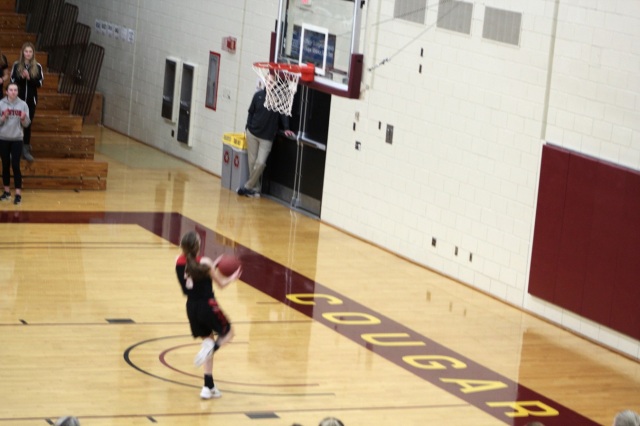 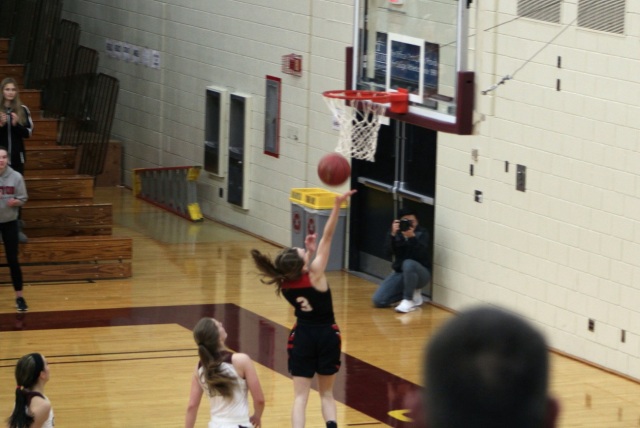 [The Emma on Strand saga continued throughout the game . . . ]

[OK, here are the options?]

[Pizza or burgers after the game?] 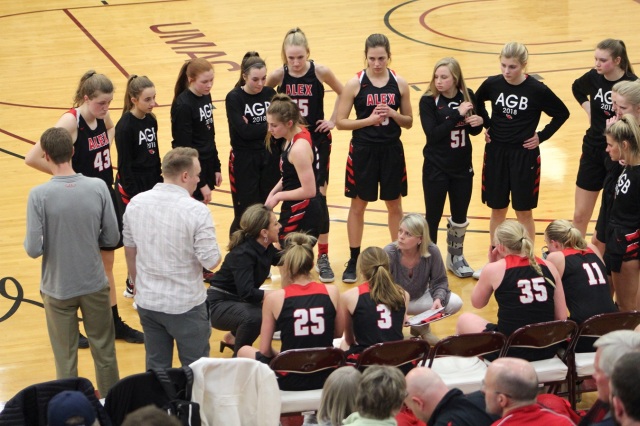 [I think (don’t hold me to it) this was the winning assist as Kaye launches a pass to Ella cutting in from the right side for a lay-up . . . (Editor’s note:  I have been advised that Emma launched the final pass to Ella!  Thank goodness for “editors”!)]

[This was the time left after Ella’s basket.  Then Mia McGrane got a steal to end the Otters’ last chance.  So, after three games against each other this season, one point separated the two teams.  The Otters won by 2 at our place; we won by two at their place.  And they are totally different teams – the Otters are all about the 3-point shot; the Cards are all about discombobulation.]

[While low scoring, it was a very intense, entertaining defensive game for we fans . . . ]

[You’ll recall last year’s team went to state, then graduated all five starters and 11 seniors, but now we’re back to state with a whole new cast of characters!  Great job by the team and coaching staff . . . ] 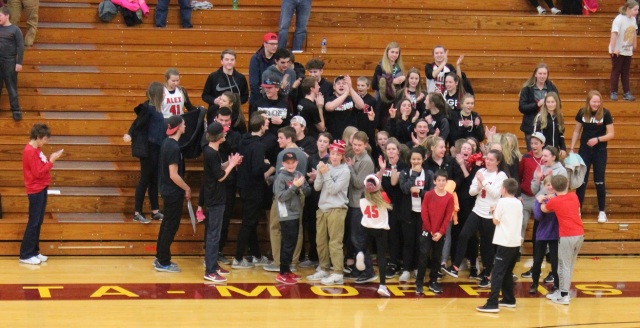 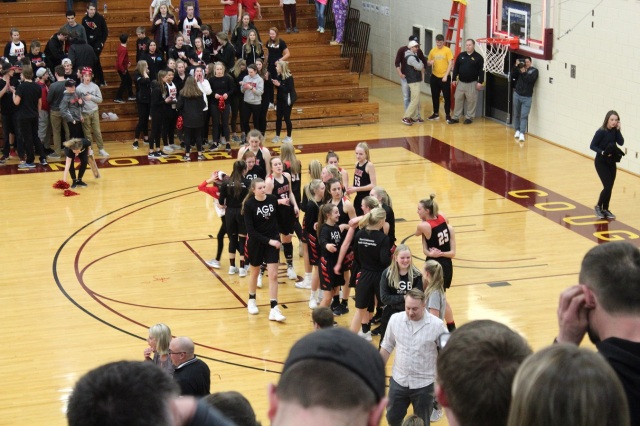 [Now this is scary!  Allegedly fugitives without proper paperwork . . . ] 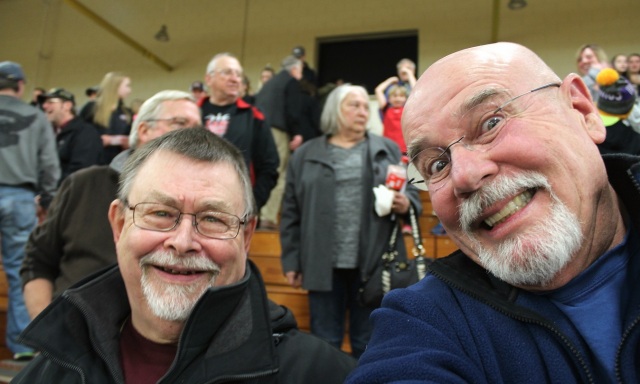 [Handing out the individual hardware, numerically beginning with Kaye Paschka . . . ] 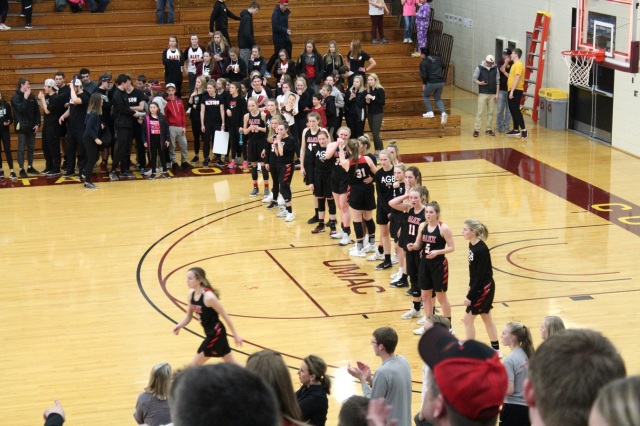 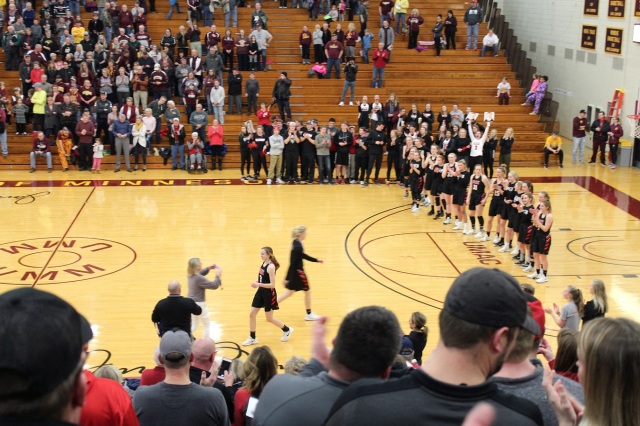 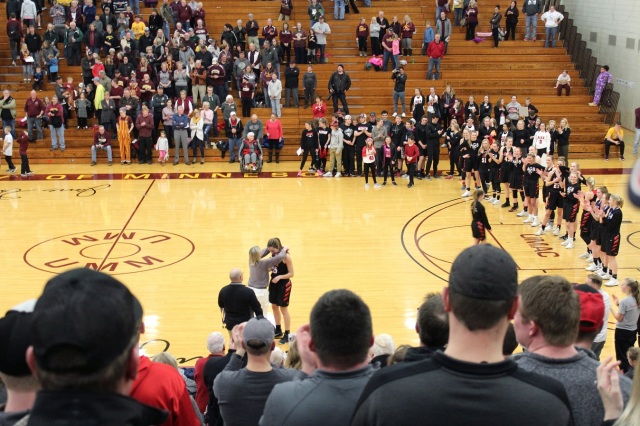 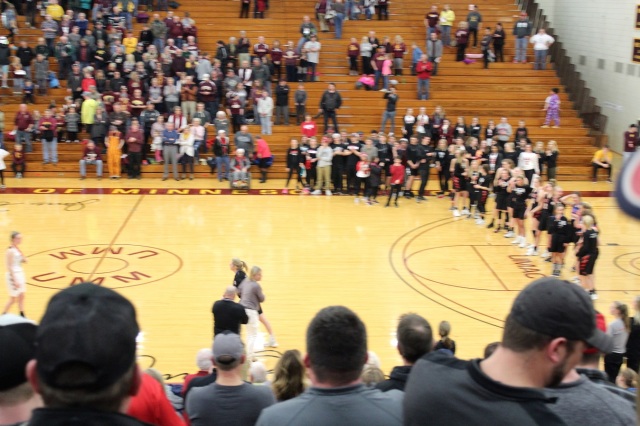 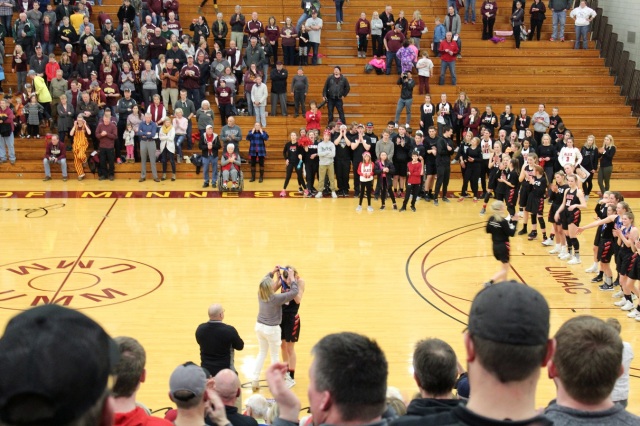 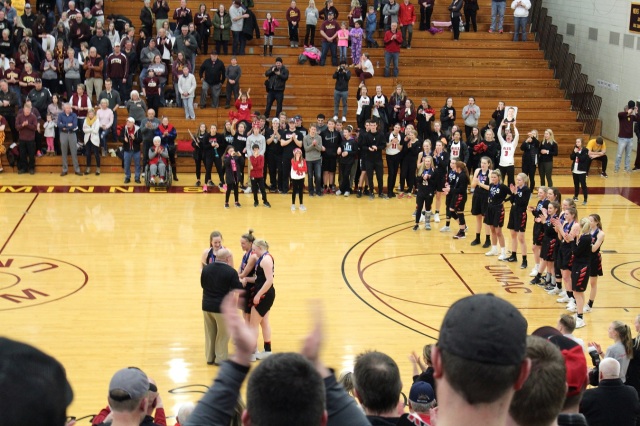 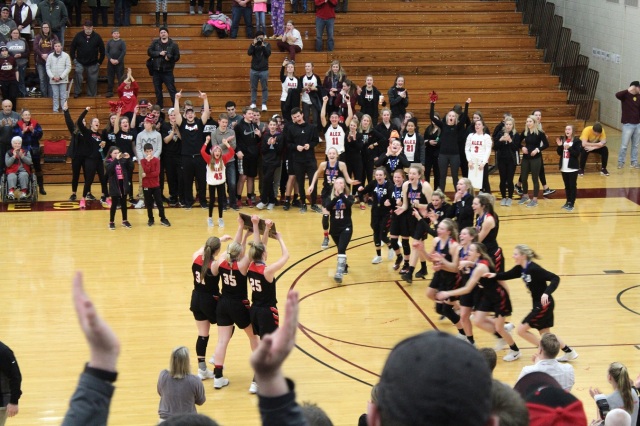 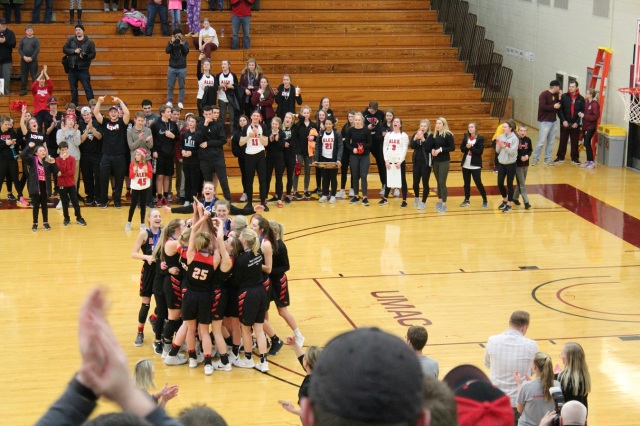 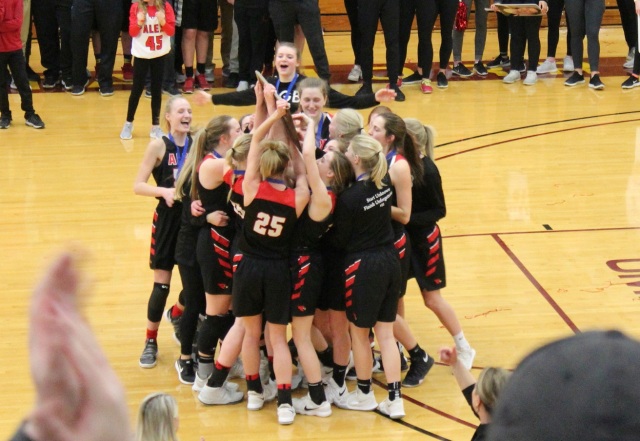 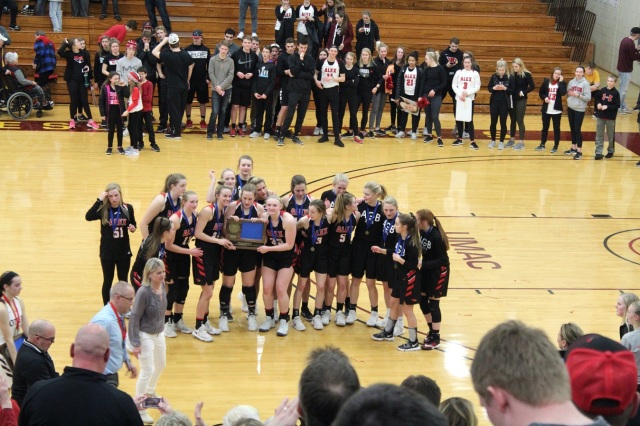 If you make every game a life-and-death thing, you’re going to have problems. You’ll be dead a lot.  ~  Dean Smith