[Congratulations to the 2018 seniors, bringing joy and excitement to older people who deign to wander out of their homes in the middle of winter . . . ]

[But if you tangle with them over a puck in the corner, you’ll find they’re tougher than Boolean algebra . . . ] 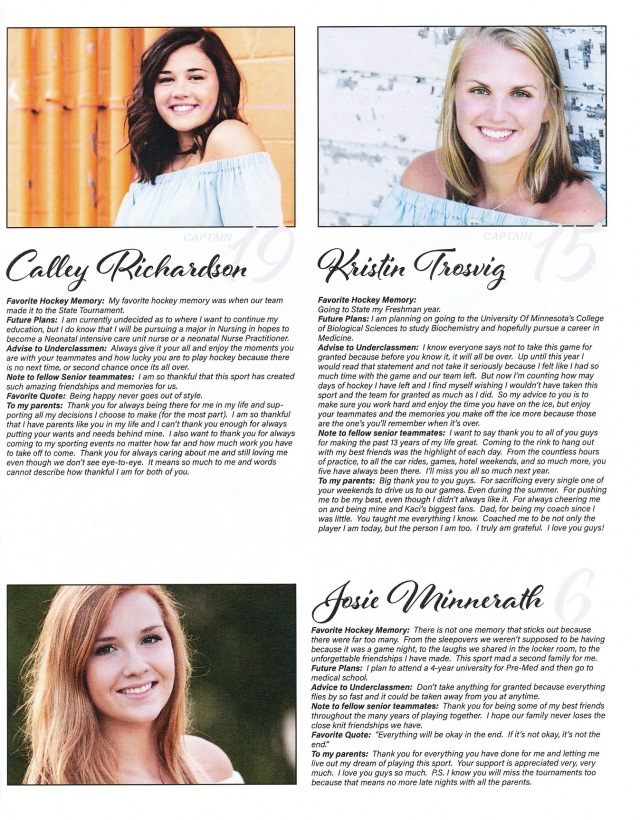 [The meeting of the captains.  We’re hosting River Lakes, who beat us earlier in the year.  Revenge always provides good incentive . . . ]

[The seniors are introduced with the parents, beginning with Allison . . . ] 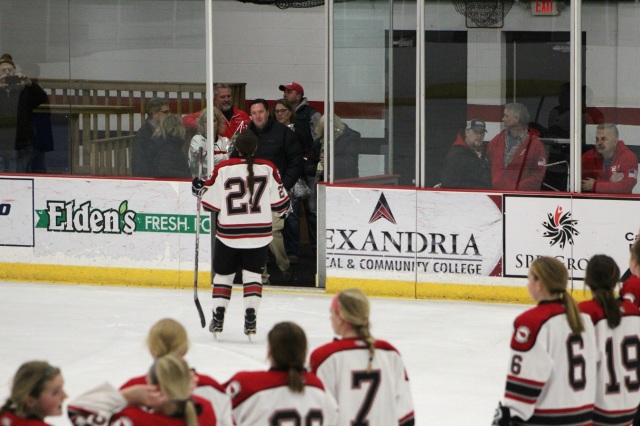 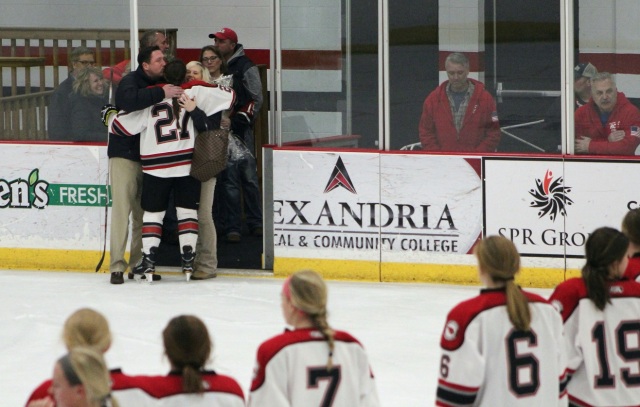 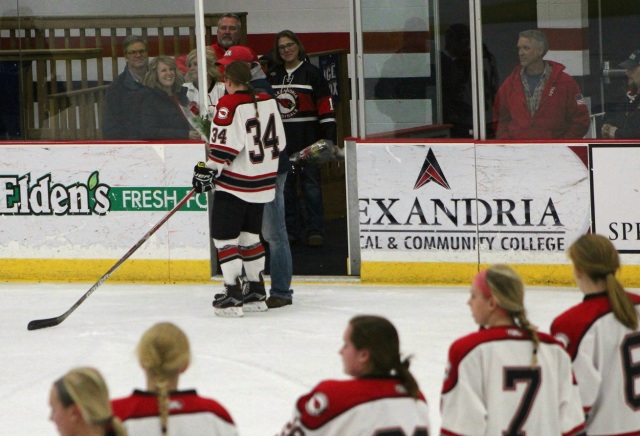 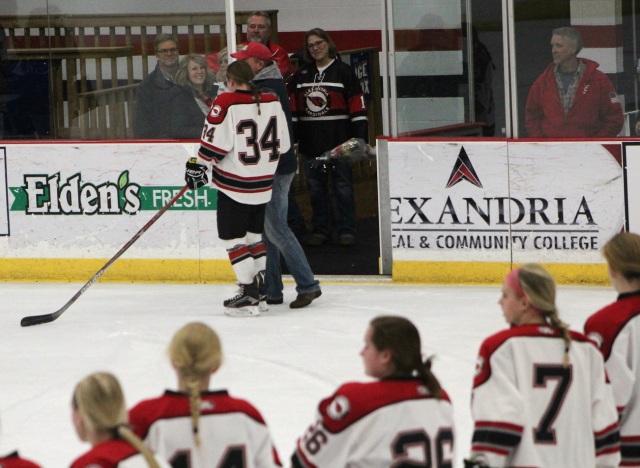 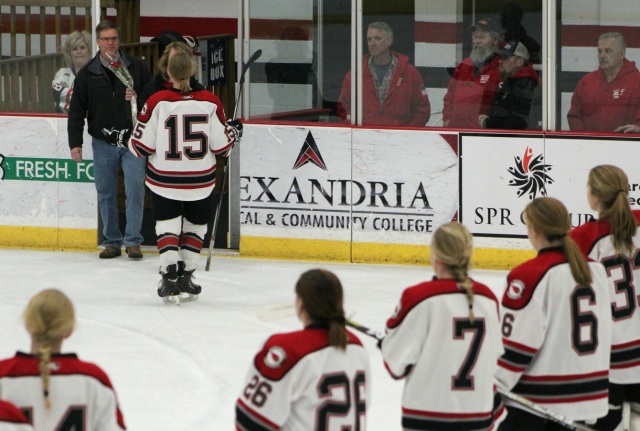 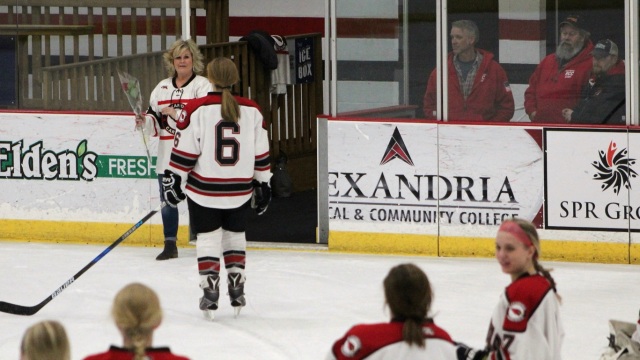 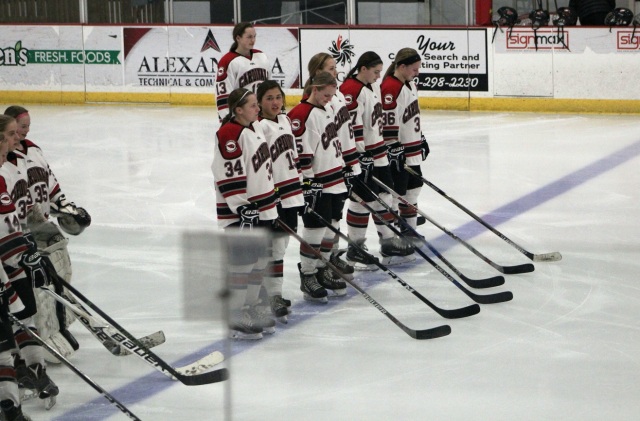 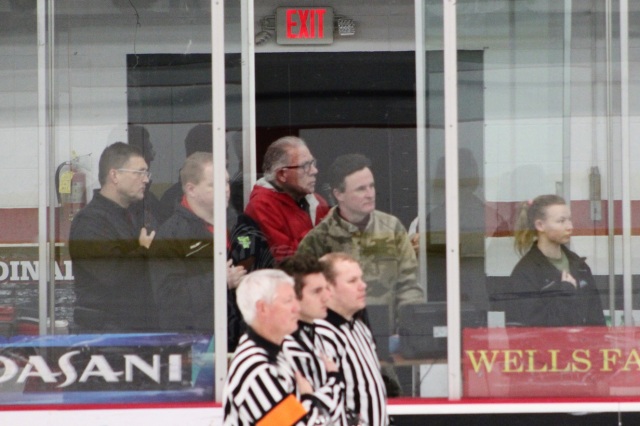 [He is joined by scoreboard operator, Donnacha O’Connor, better known as the superintendent of the Alexandria Golf Club . . . ]

[McKenna Ellingson (24) on the doorstep, a scene that was repeated often this game.  McKenna achieved a natural hat trick against Detroit Lakes earlier in the week – amazingly in less than 2 minutes she scored even strength, on a power play, and shorthanded . . . ] 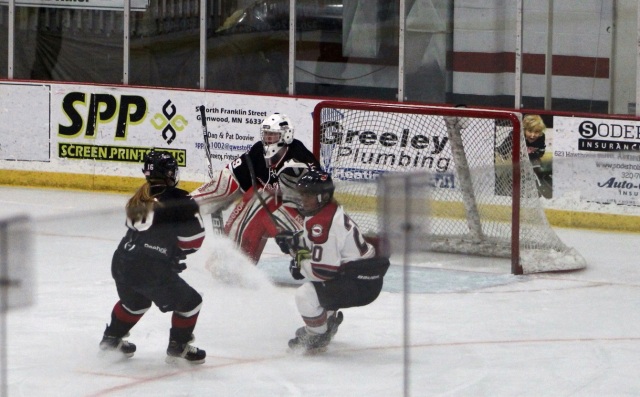 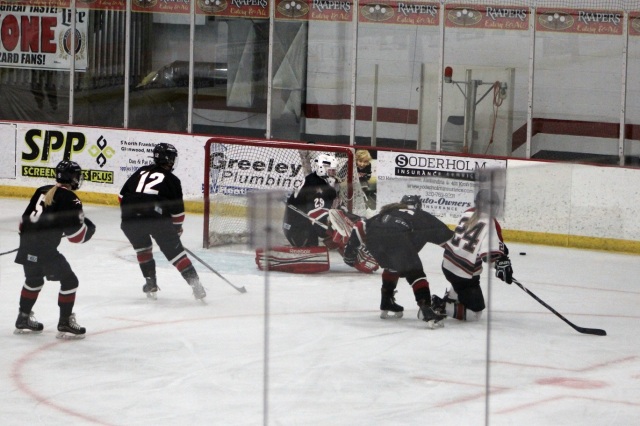 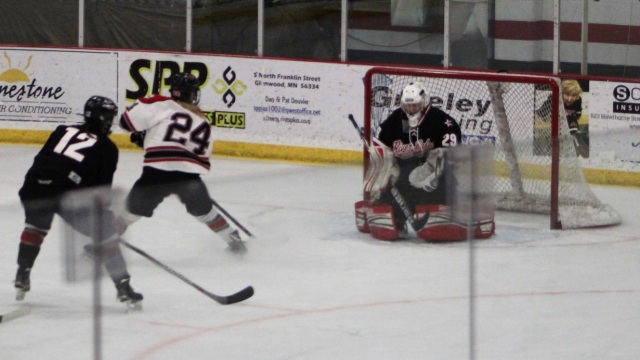 [Appears to be a face-off, but where’s the Cards’ center?] 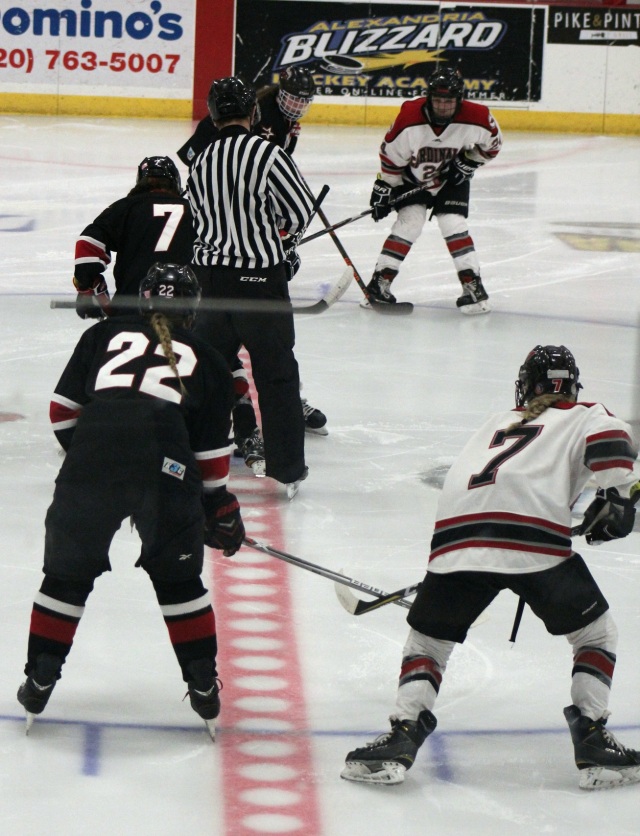 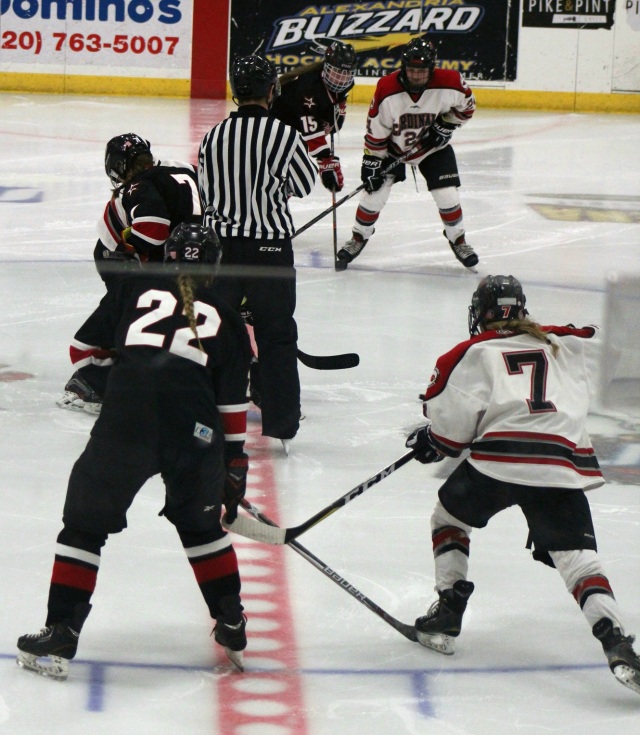 [Alexis finally appears on the downhill side . . . ]

[If there’s one area where the Cards have improved mightily, it’s on face-offs.  Here Alexis shows the proper technique for the best leverage – nose on the ice!] 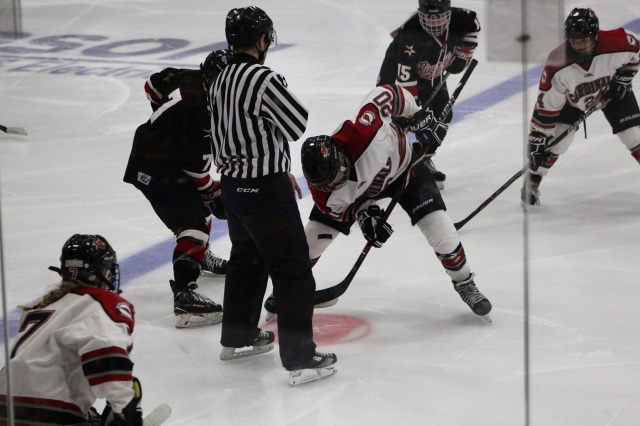 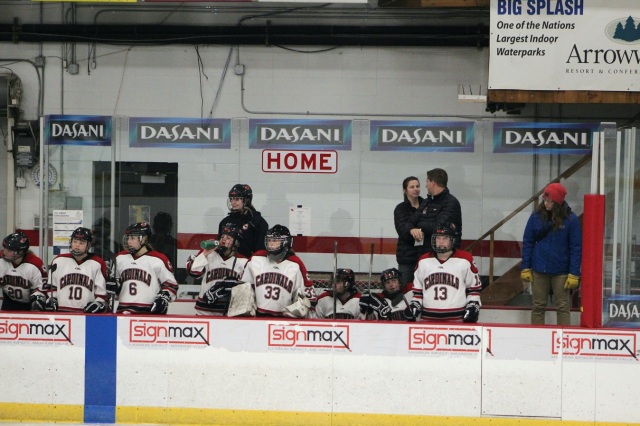 [The Trosvig sisters are in together with Allison . . . ] 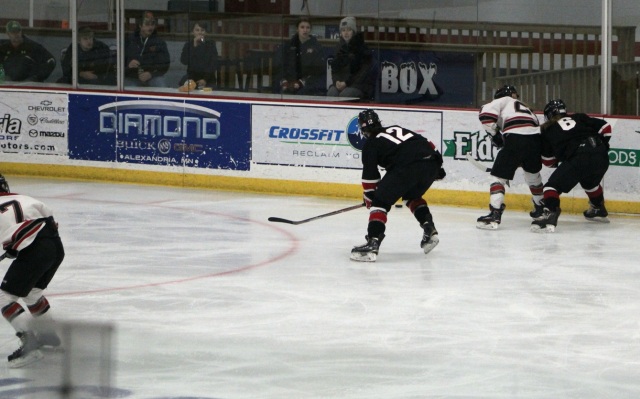 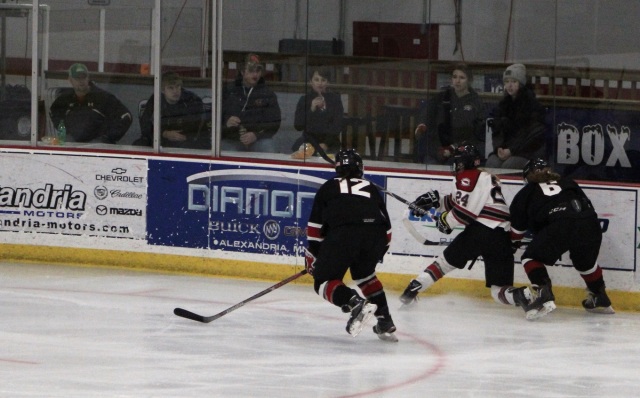 [And then, we scored!  Kristin from Josie, tying the game at 1 (the Stars had scored a couple minutes earlier on a shot from the blue line that found a corner of the net).]

[And after you finally score following continuous pressure, you generally score again.  So we did – 20 seconds later, Calley from Alexis and Kaci.]

[And then we had the idea that we now had the game in hand.]

[The puck’s in the photo, but no Cards?] 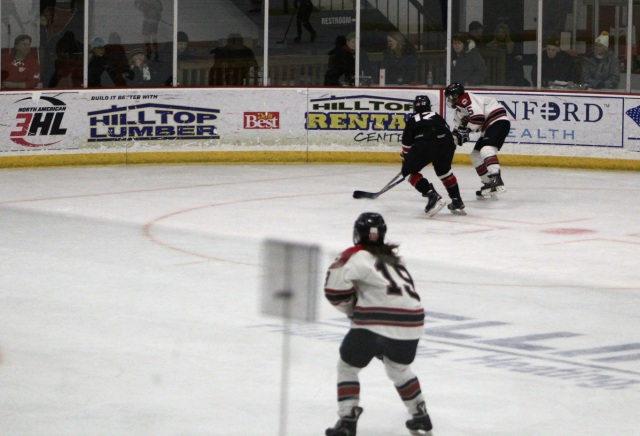 [Calley tries to jam it in as both Trovigs ready for a rebound . . . ] 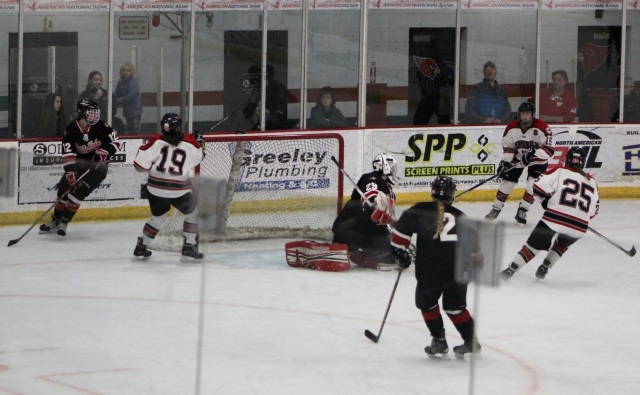 [It was senior night, so the event was festooned with the band and – cheerleaders . . . ] 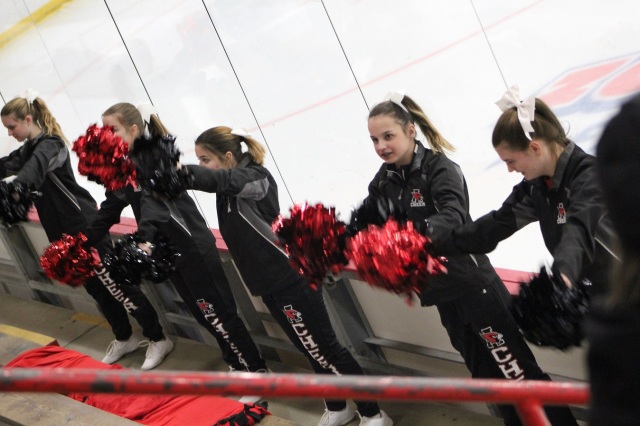 [Meanwhile, back at the hockey game, the puck exits stage right . . . ] 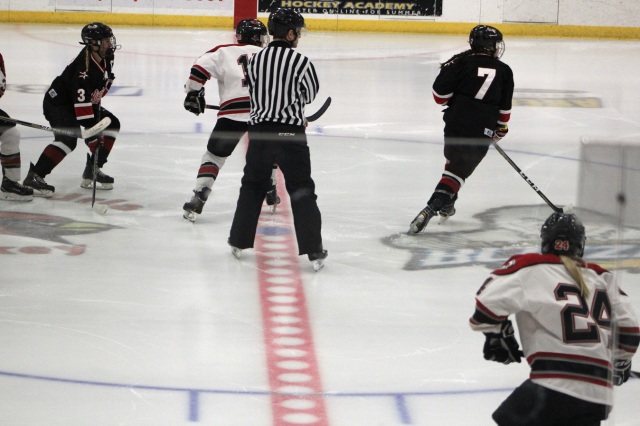 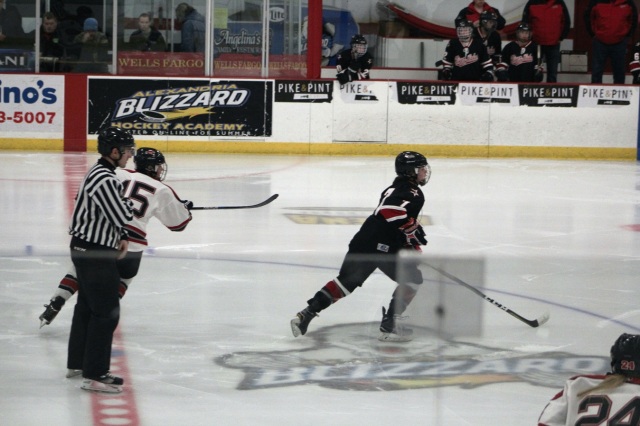 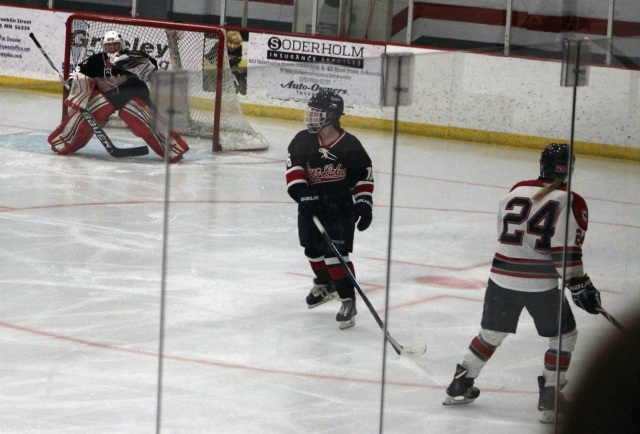 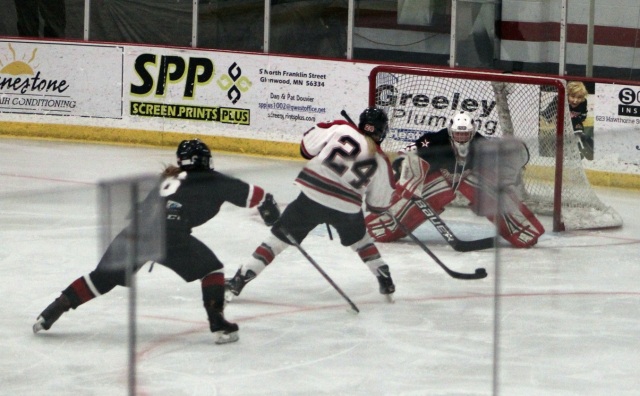 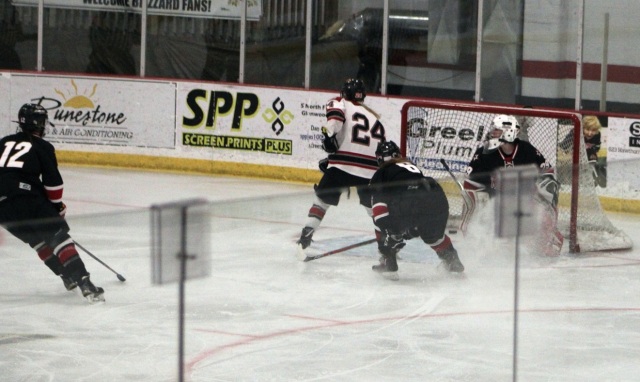 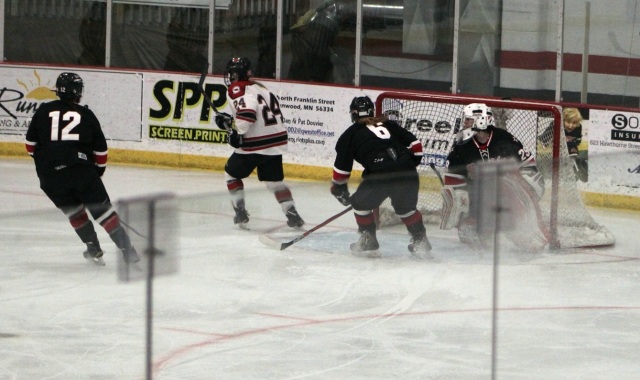 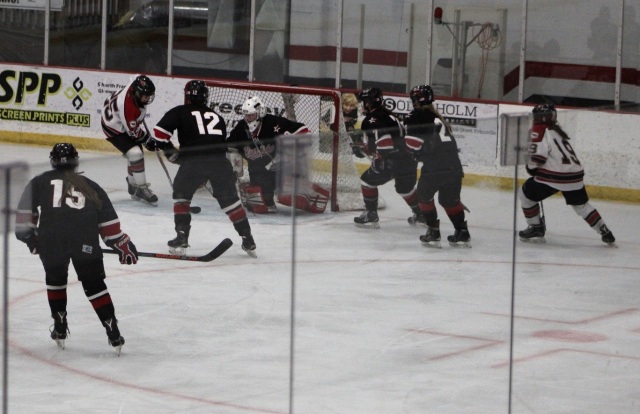 [Taylor has an upclose and personal meeting with a Star . . . ]

[Well played, Cards.  We are on an 8-game winning streak and are ranked No. 4 in state class A.  I looked back at the game where we lost to the Stars in OT – we outshot them in that game 44 – 24.  It happens.  In this game, the shot differential was minimized by the 5 penalties we took v. none for them.  In a season in which the schedule has been tougher than Boolean algebra (oh, did I use that metaphor already?), our last three regular season games are off the charts – at Grand Rapids, at St. Cloud, and hosting Breck.  Uffda!]

Kill them with success and bury them with a smile.  ~  Usain Bolt

Up Next:  Yup, Panama