[Proof of the aforementioned “aft” part.]

[Back inside in the Atrium, three floors worth from deck 1 to deck 3.  Featuring, on this day, art from Cuba (I believe) on the big screen. 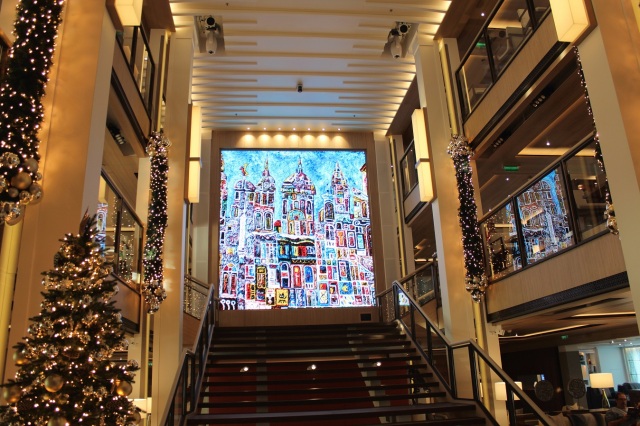 [And because this is a Viking endeavor, featured throughout the ship, the works of Edvard Munch, a fine Norwegian fellow.  The Munch Museum in Olso now has in its permanent collection well over half of the artist’s entire production of paintings and at least one copy of all his prints. This amounts to over 1,200 paintings, 18,000 prints, six sculptures, as well as 500 plates, 2,240 books, and various other items. The museum also contains educational and conservation sections, and has facilities for the performing arts.  (Wikipedia)  As I recall, it’s the largest museum in the world dedicated to a single artist.] 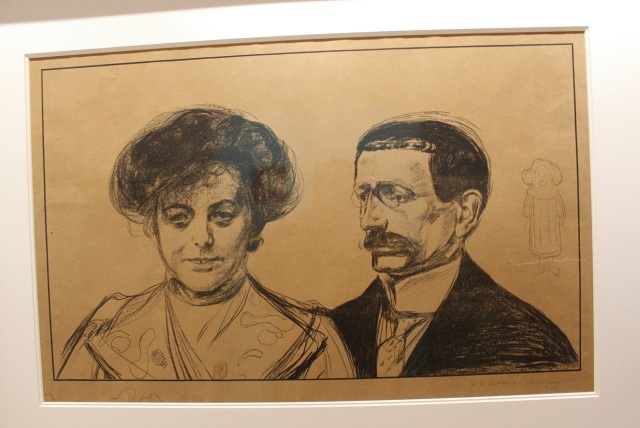 [The Star Theater, where all important events of the day took place from entertainment to lectures . . . ]

[This was a nice feature we’ve never had before – like cruising with senior college!  Over the course of three weeks we got to know all of them – interestingly, Karen Hansen and Bill Gurstelle are married, to each other, and live in St. Paul, and we all came home on the same plane.  The lectures ranged from such as the local culture of upcoming places to . . . catapults and pirates.  Though there were often more than one lecture per day, the 6:00 pm lectures were a nice prelude to going to dinner . . . ] 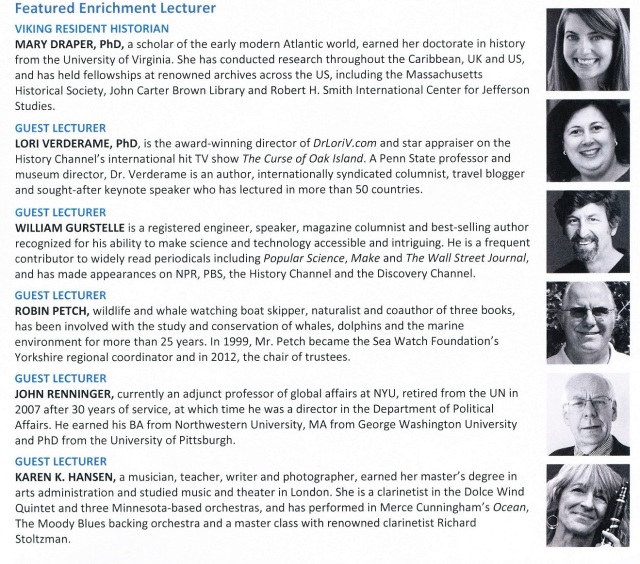 [My personal stateroom stock . . . OK, this was the entry to The Restaurant, the main sit down and order eatery (gentlemen we required to wear long pants and a collared shirt).]

[Cruise director Heather Clancy invites us to our first stop – Cienfuegos, Cuba.  Heather has a marvelous mezzo-soprano voice and has performed all over the world.]

Twenty years from now, you will be more disappointed by the things you didn’t do, than the things you DID do. So sail away from the safe harbor. Cast off the bow lines. Catch the tradewinds in your sails. Explore. Dream. Discover.  ~  Mark Twain

Up Next:  Day 3 (with usual disclaimers)