[The Super captures the beginning of festivities at Ridder Arena on the U of M campus as our Cards would be taking on the Mound-Westonka Whitehawks, the No. 4 seed, in the consolation bracket.  We beat the Whitehawks 2-1 at their place in November for Molly Arola’s first win as a head coach.] 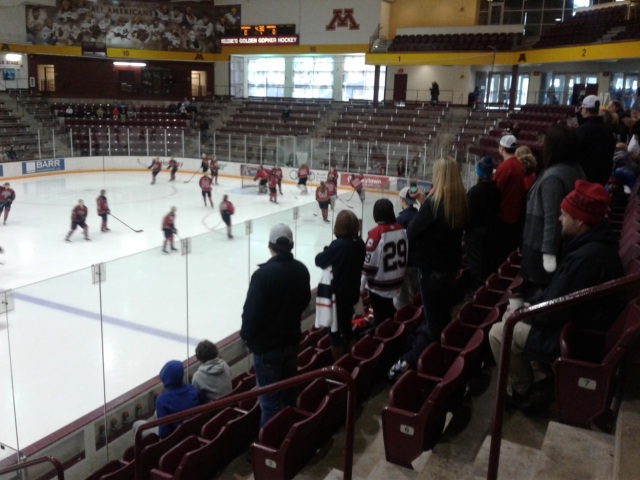 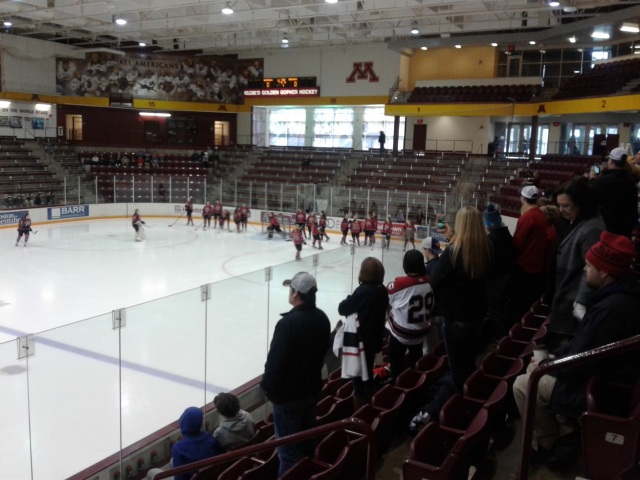 [Pure happenstance, I picked Alexis Heckert (20) out of the warm-up crowd.]

[Go Cards!  Or something to that effect.] 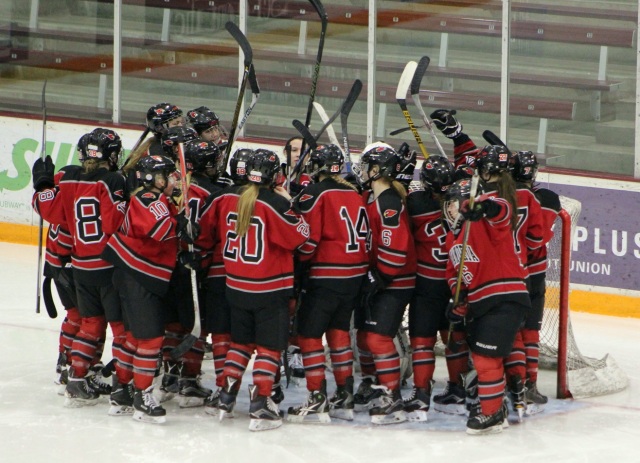 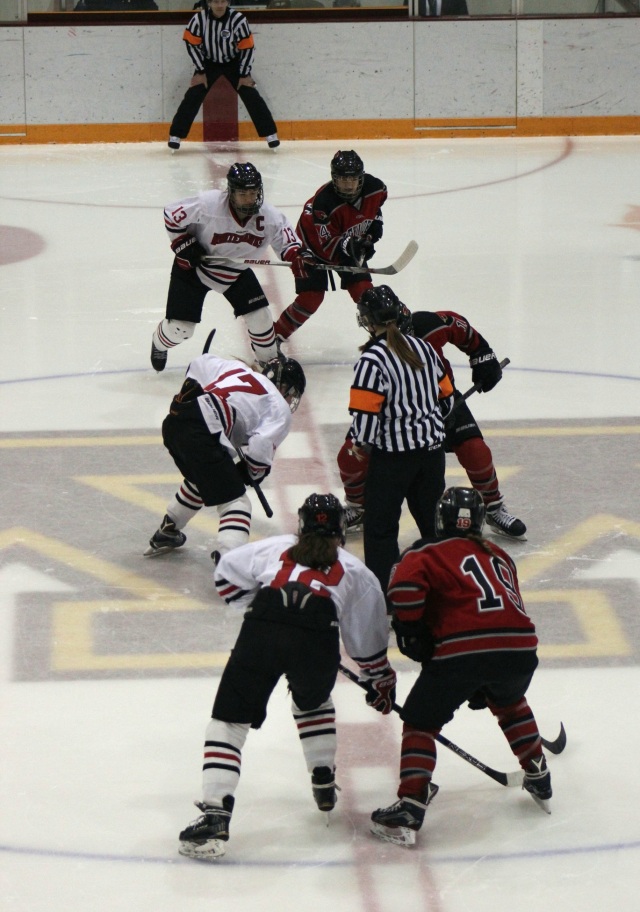 [Liz Schepers (13) line for the loyal opposition.  Schepers even got her own story in the Strib before the tournament started – I think she lead the state in scoring and is going to play for Ohio State (did you catch that, Crazy Dave?).  She had an unbelievable game against us.] 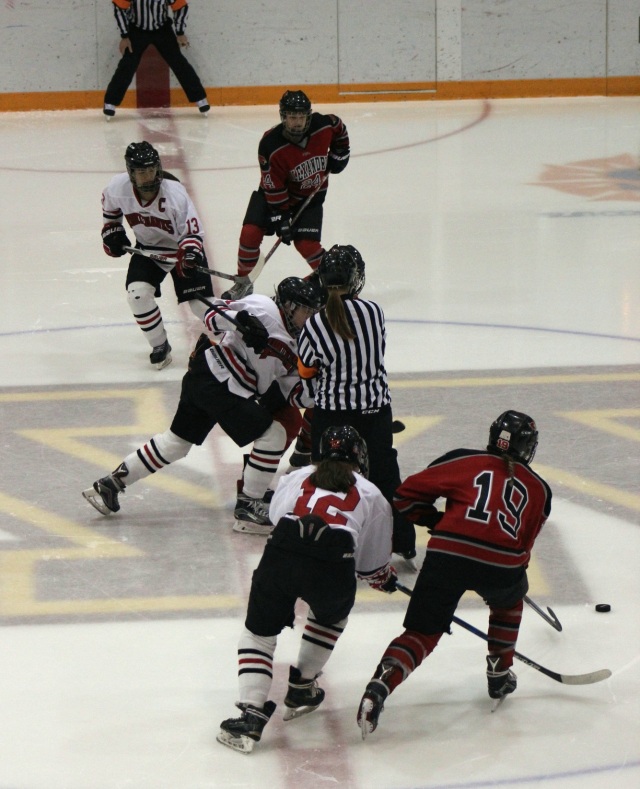 [And cheer oh cheer for Alex, the Cards came out flying and flew all game.  Kristin started what turned out to be a totally unexpected scoring barrage.]

[Looks like Megan Pesta (8) in with Marki and Mayson.]

[Eventually leading to Kristin’s 2nd goal, which came shortly after Schepers performed her first piece of magic to tie the score.] 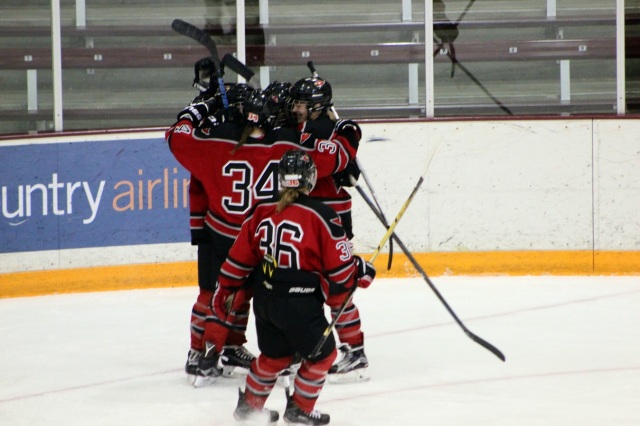 [The Cards threaten again with the Trosvig line.]

[And then this could have been McKenna’s goal – but I don’t see any hugging?] 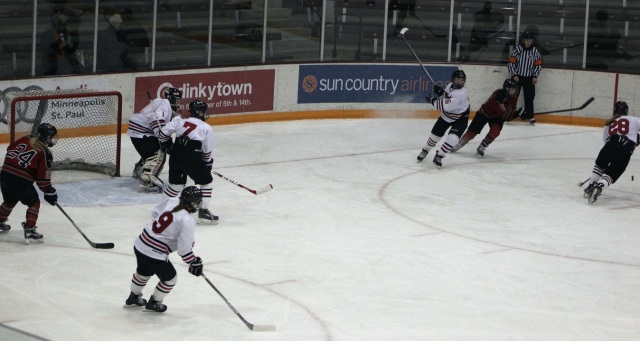 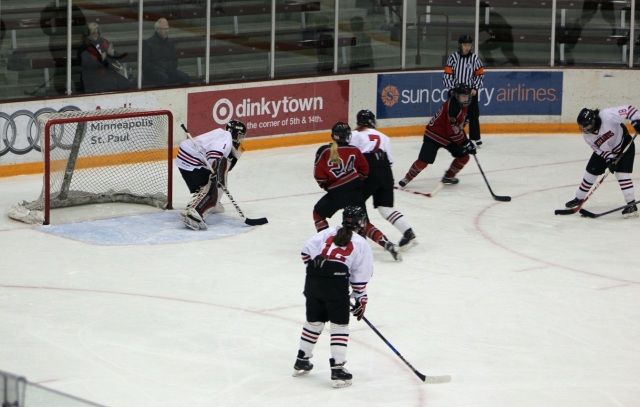 [These were more or less the scenes the entire game – Cards were always all over the Whitehawks’ goal.]

[Even the defense was getting in on the offensive action as . . . ]

[After the 1st period, we had a very comfortable feeling.] 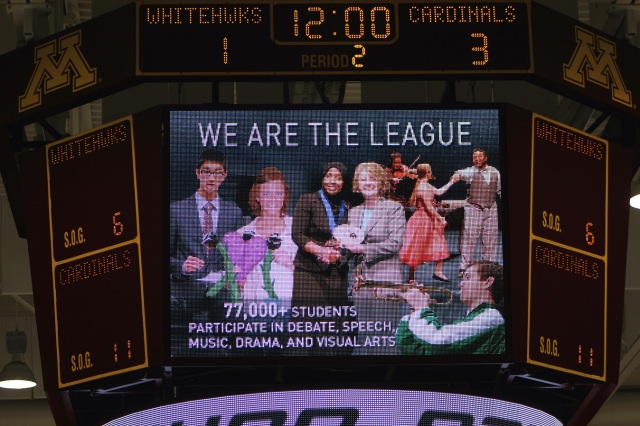 [Period 2, the Cards try a triple defense on Schepers.]

[Our crowd – not as big as the first day because all the students had to go back to school.] 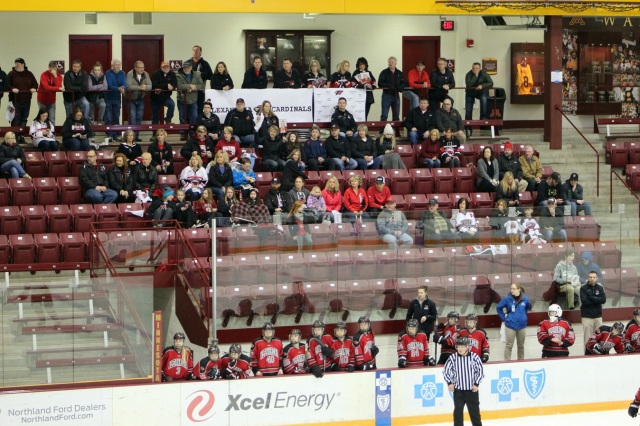 [The Super – in the middle – and I sorta opted for the clear sight lines of center ice.] 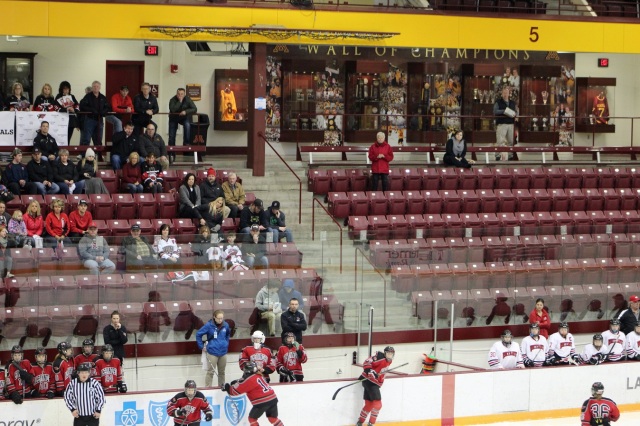 [She hadn’t been to many games this year, but she got back into her cheering mode.]

[The loneliness – often welcome – of the hockey goalie.  Sarah will be a Gopher next year – as a nursing student.] 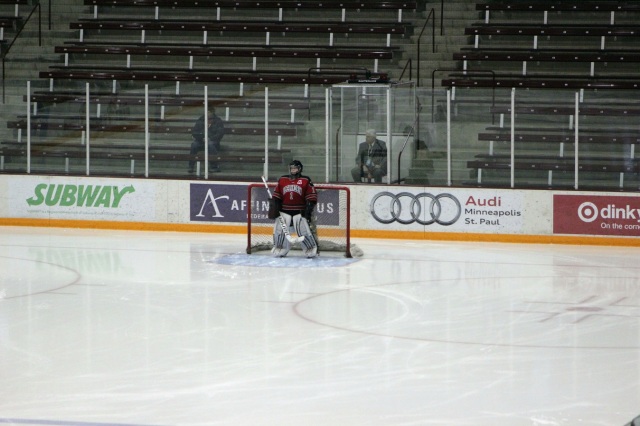 [Calley’s back on the door step.] 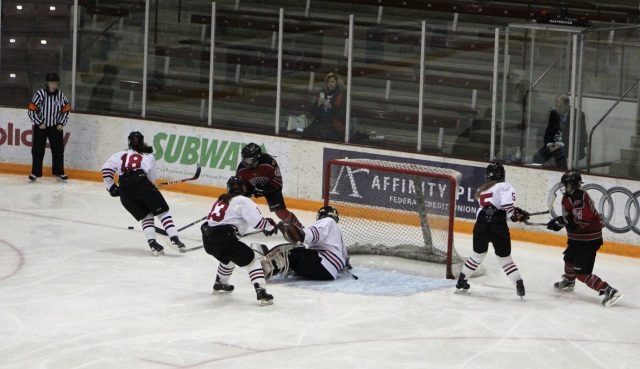 [And she eventually scored to make the score 4 – 3.  3, I hear you ask?  Yup, Schepers scored the first two goals of the period, with great speed and stickhandling.]

[The Whitehawks tied it up again shortly thereafter on a goal assisted by Schepers.  Then about 30 seconds later, Schepers scored again -a 2nd period hat trick and her 4th goal of the game.  Now we were behind 5 – 4.  The Cards were not happy about this.  We had been totally dominating the game and this Schepers person was messing it all up.  Rev scored about 30 seconds later to tie the score again at the end of the period.] 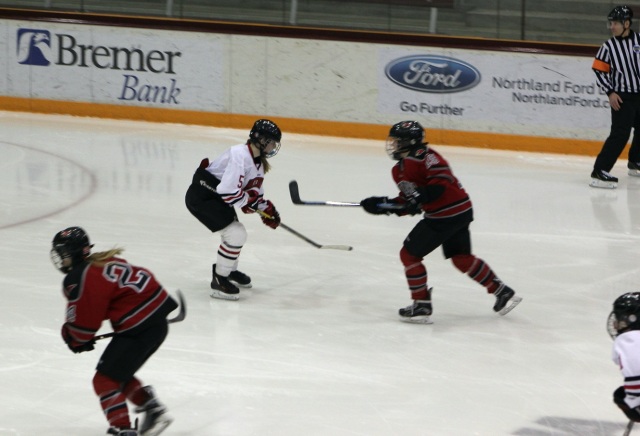 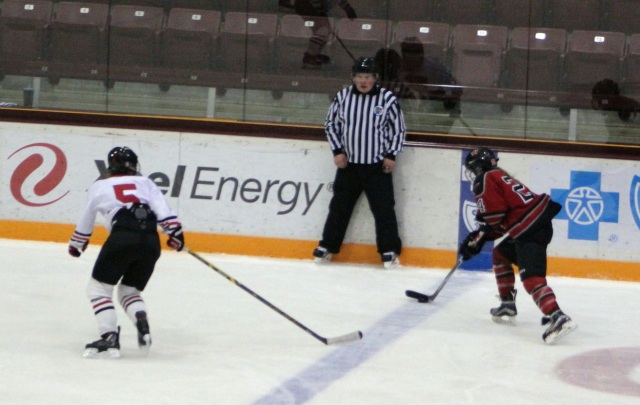 [But at the 10-minute mark, the Whitehawks tied it again – the assist to Schepers, who figured in all their scoring with 4 goals and 2 assists.]

[A very strange game for two defense minded teams.  The Whitehawk goalie has been considered one of the best in the state the last couple years.  So, we went into OT with a 49 – 19 shots on goal advantage – incredible.]

[Coach Arola addresses the team before the OT, likely reminded them they’ve controlled the whole game and to now go out and win it.] 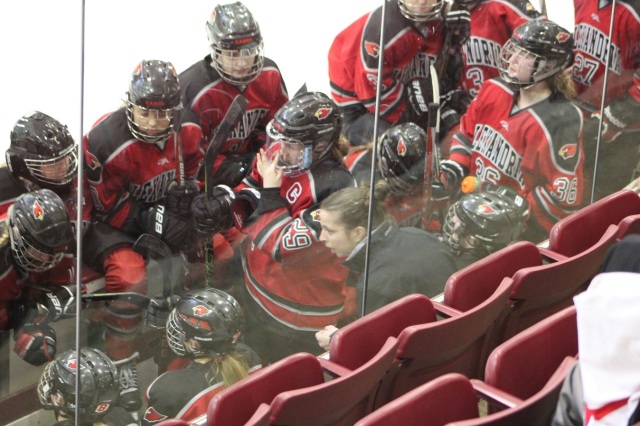 [The Whitehawks had the early advantage in the extra period . . . ]

[But when the Cards broke out, with a rush by McKenna up the right side, she somehow got it past the goalie for the winning goal!] 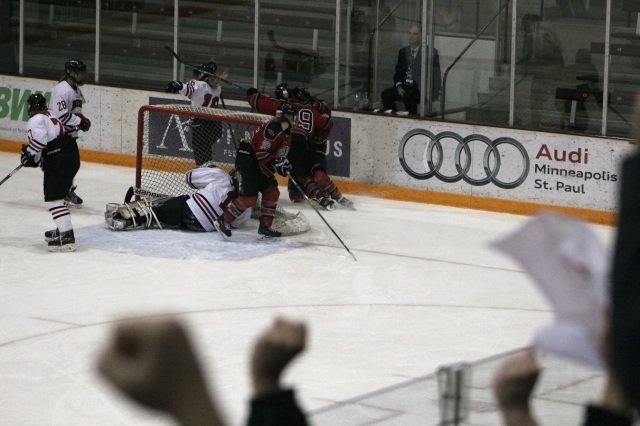 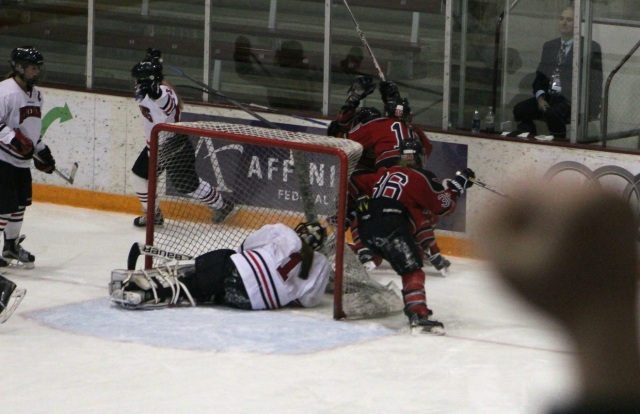 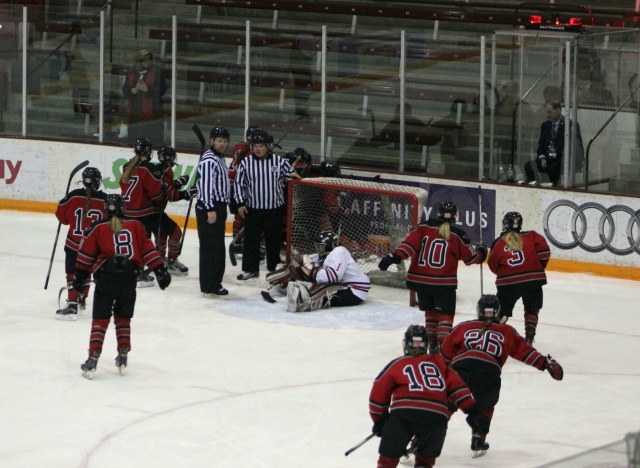 [On to the consolation final against Hibbing/Chisholm on Saturday morning.] 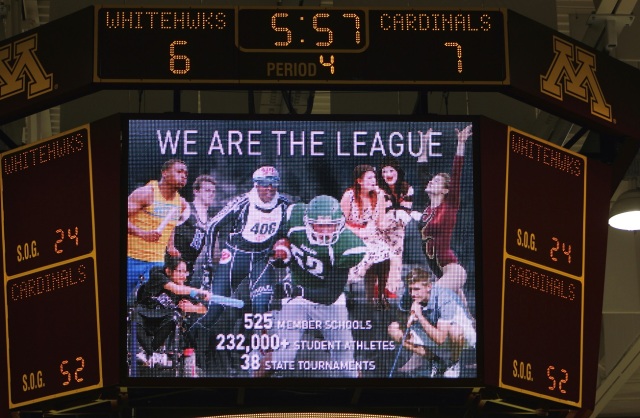 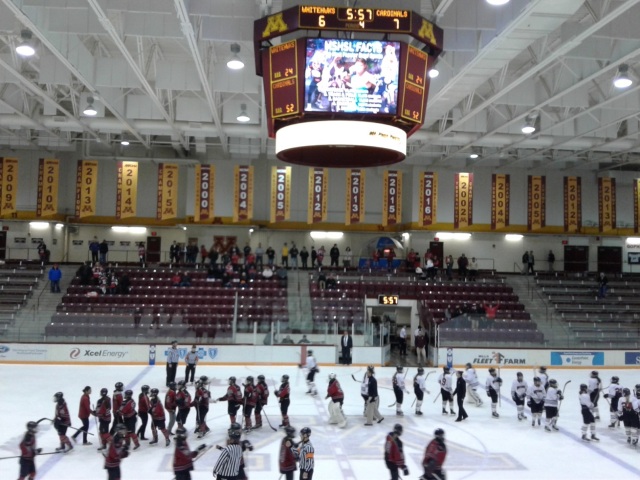 In the old days, we would have been there, spent the afternoon doing elite liberal stuff in the city, and then stopped in St. Cloud on the way home to catch the boy Cards in the section semifinals against Sartell. But we decided to just stay home, wear our shawls, and take a few naps.  ~  Cub Reporter

We weren’t there for the game.  The earlier threat of big snow in the cities threw us off our game plan.  But we listened to DMac and Bob on the radio, and it sounded like we continued our great tournament play.  This was more like our usual game.  It sounded like we had an advantage in play, but neither team could score.  The Hibbing/Chisholm Bluejackets had an almost Schepers like player in Mallorie Iozzo, but we kept her off the scoreboard. Next year she will be playing with Rev at UMD.  Kristin scored a shorthanded goal in the 3rd period – and it would hold up as the winner in a 1 – 0 game.  During the year, the Cards scored 6 shorthanded goals and gave up none – Kristin played a big part in that both ways.  Rev and Iozzo made the all-tournament team – I thought Kristin should have as well with 4 points in the Mound-Westonka game and the only goal in the Hibbing/Chisholm game.  She’ll be back to take another run at it next year.  It’s time for a final thanks to seniors Rev, Sarah, Megan, Ashton Oberg, and Maddie Guy.  They will be hard to replace, but we have a good core coming back next year. 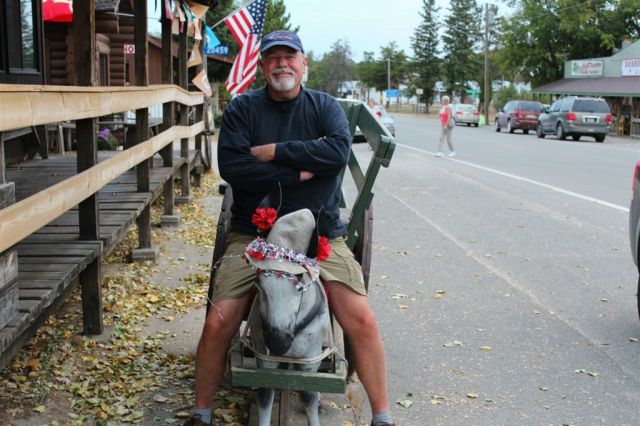 I’ve just been ‘sitting on my ass’ for two days (OK, gym in the morning where I amble for an hour). But it’s my favorite time of year on the sports calendar – tournaments starting in hockey and basketball. So, Friday watched all four girls’ state hockey semifinal games on TV . . . and started blogging the Card games we actually saw live and in person. And yesterday . . . oy! Listened to our Cards win the state consolation championship in the morning – a 1-0 nail biter to the end. Then the Super’s lady Hoosiers were on TV. Then the Gopher men basketballers continued their great run with a win over Penn State. Then the girls’ hockey class A and class AA state championship games. We were watching the 2nd game in conjunction with listening to the Card boys’ hockey section semifinal in St. Cloud v. Sartell – rolled to an easy 3-2 win in OT! Jack Westlund scored the game winner about 6 minutes into OT. We play St. Cloud Cathedral for the section championship on Thursday (I think). And this coming week, basketball sections begin.

I should note a positive trend in girls’ high school hockey – more women head coaches.  I thought it would get more play in the media, particularly in the Cardinal-Blue Jacket game.  Both teams have first year women coaches – Molly for us and Emily Erickson for the Bluejackets.  And they were high school teammates in Grand Rapids, and college teammates (along with our Cardinals’ Abby Williams) at Bemidji State.  And the class AA state champions Edina had a first year woman coach who also played for the Hornets just a few years ago.