Lands Down Under (Day 4)

[Beginning with a 90-minute plus bus ride to the Blue Mountains.  Shortly before arrival we made a rest stop in Leura (a town about the size of Sauk Centre).  The Biddies took the opportunity for a quick excursion through town in search of pastries and an ATM.] 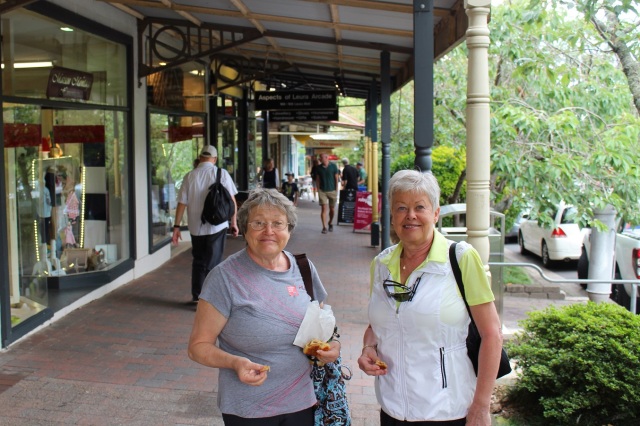 [We’ve arrived at Scenic World where you [G]lide between cliff tops and gaze at the rainforest canopy through the glass floor of the Scenic Skyway!  Suspended 270 metres above ancient ravines, the Skyway provides a unique thrill as breathtaking views are revealed beneath your feet through the electro-glass cabin floor.  With 360° views, the 720 metre journey provides the best views of Katoomba Falls, the Three Sisters, and Jamison Valley stretching to the horizon.  Disembark at the Skyway’s east station to access lookouts over the valley along with bush trails to Echo Point (scenicworld.com.au).] 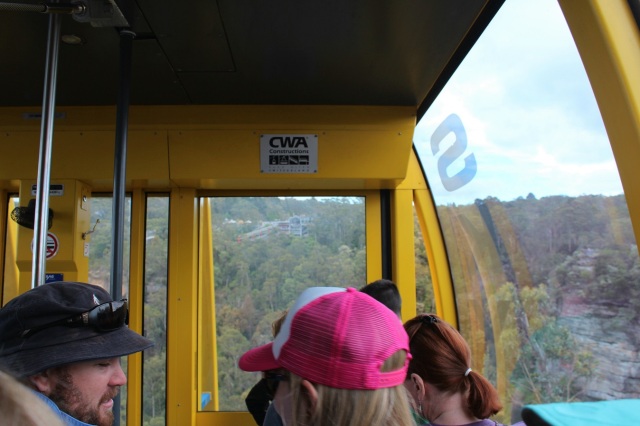 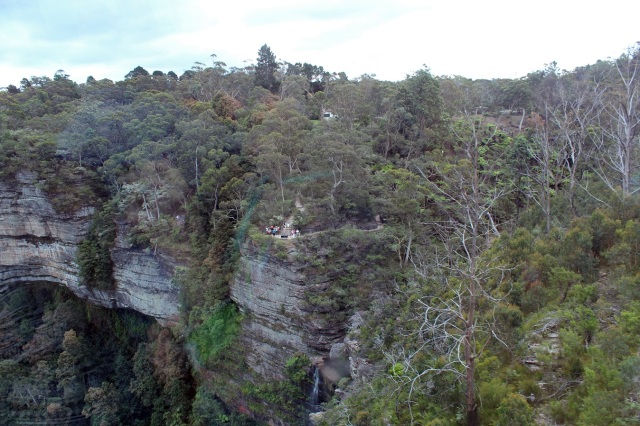 [And what cable ride is complete without a glass floor?] 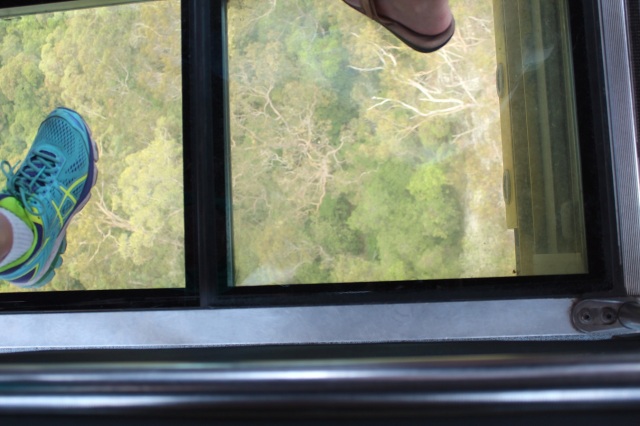 [The Super’s having fun.]

[Coming in for a landing – the Three Sisters on the left.] 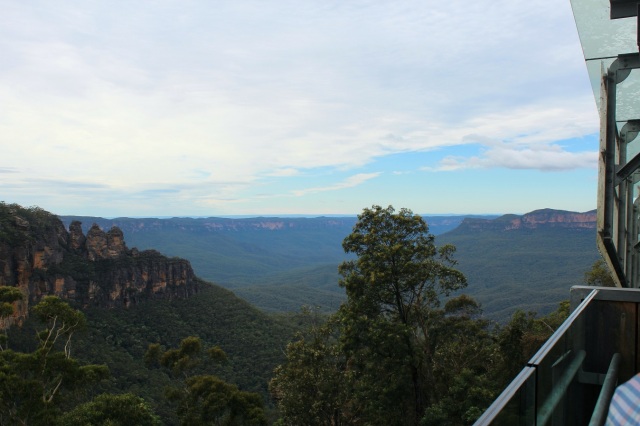 [Looking back at whence we came.]

[But that was just the start.  Next, [D]iscover the thrill of a 52 degree incline riding the steepest passenger railway in the world, the Scenic Railway.  Custom designed carriages allow passengers to adjust their seated position up to 20 degrees!  The Railway experience descends 310 metres through a cliff-side tunnel, emerging into ancient rainforest at the Jamison Valley floor.  Carrying 84 passengers, the train departs every ten minutes. Disembark at the bottom station to access the Scenic Walkway and stroll through 2.4 kilometres of Jurassic rainforest  (scenicworld.com.au).]

[Bert and Kathy settle in.]

[Photographing the staff photographer (so he can notify the next of kin).] 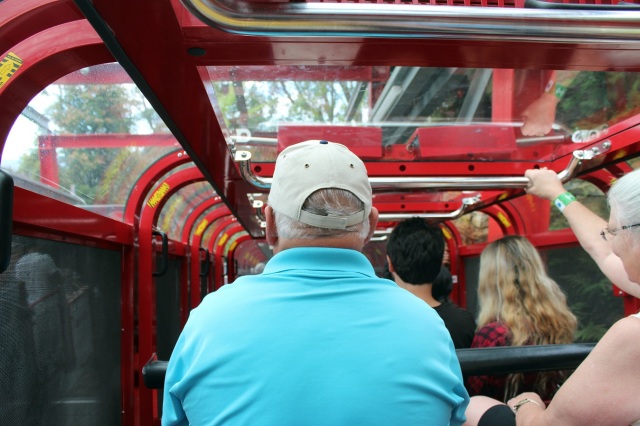 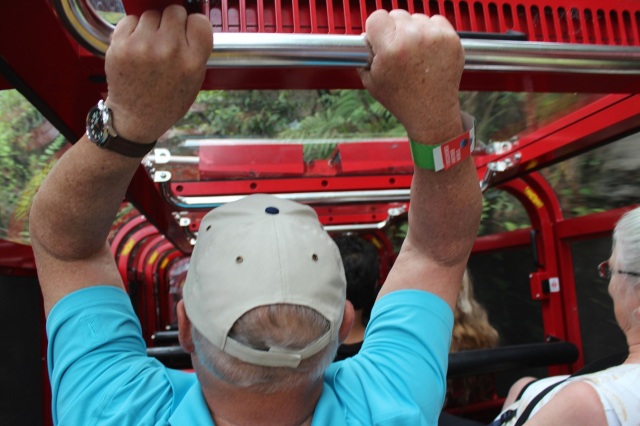 [We’ve arrived at the walkway.] 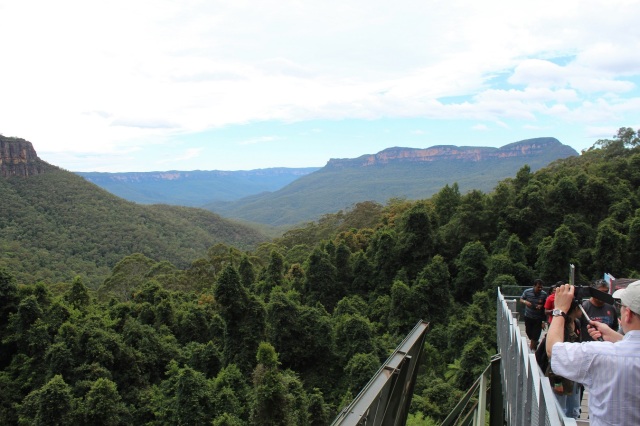 [Jamison Valley in the Blue Mountains]

[Time for the selfie-stick shots.]

[Looking back up the tracks.]

[Beginning our walk, this was coal country at one time.]

[Mine, as in where they found coal.]

[Getting a feel for being in a rain forest.] 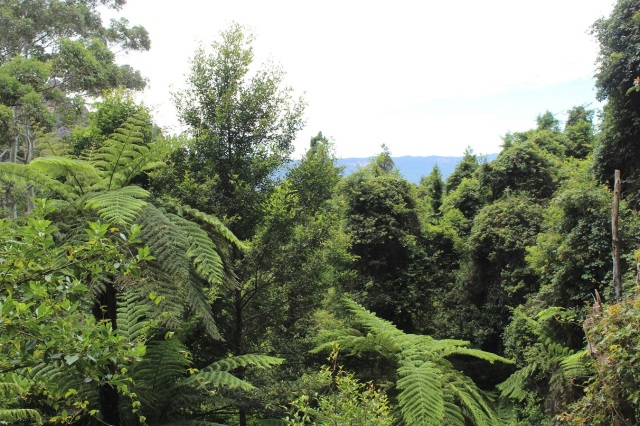 [As you could note, the railway didn’t take us all the way to the bottom.  A little Stairmaster action was required for that.] 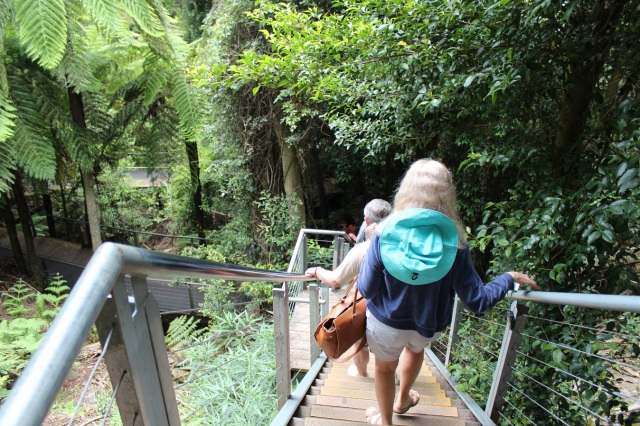 [More signs of past human activity.] 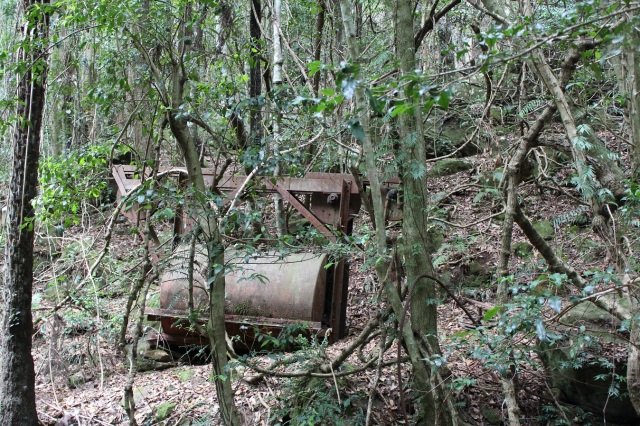 [A really big tree in Australia will either be a fig . . . or in this instance, a gum.]

[Wow, how did we make it through all this?]

[The Super emerges in a “clearing.”]

[Now we have to get back to the top.  So, [D]iscover panoramic views of the World Heritage-listed Blue Mountains from the Scenic Cableway.  The 510 metre journey gently descends into the Jamison Valley and also returns visitors to the top of the escarpment. The Cableway’s fully enclosed cabin provides a unique vantage point for viewing the Three Sisters, Orphan Rock, Mt Solitary and Katoomba Falls.  Disembark at the bottom station to access the Scenic Walkway and stroll through 2.4 kilometres of Jurassic rainforest.  [t]he Cableway is the steepest and largest aerial cable car in the Southern Hemisphere (scenicworld.com.au).] 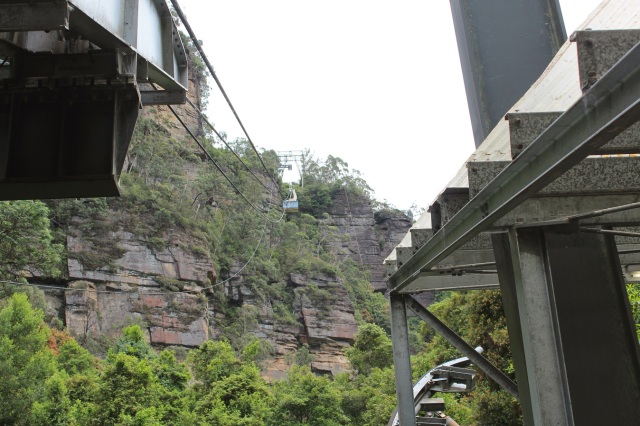 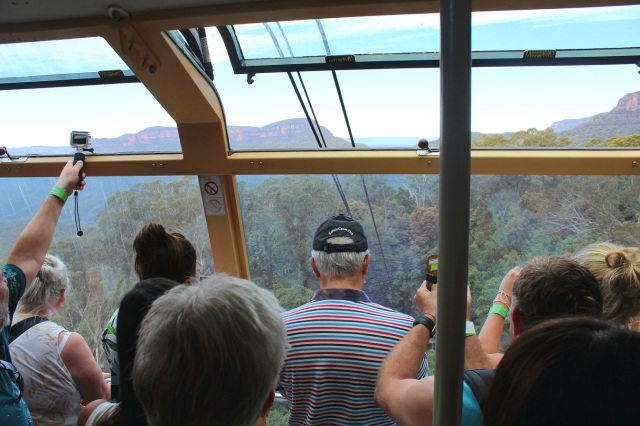 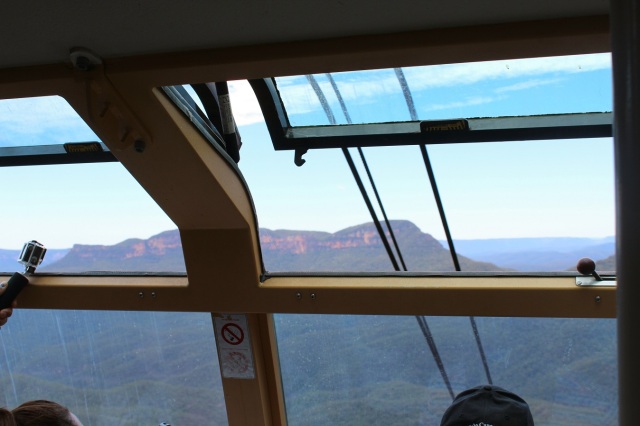 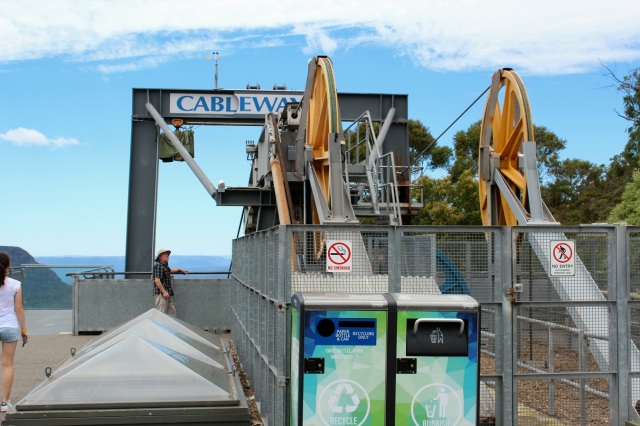 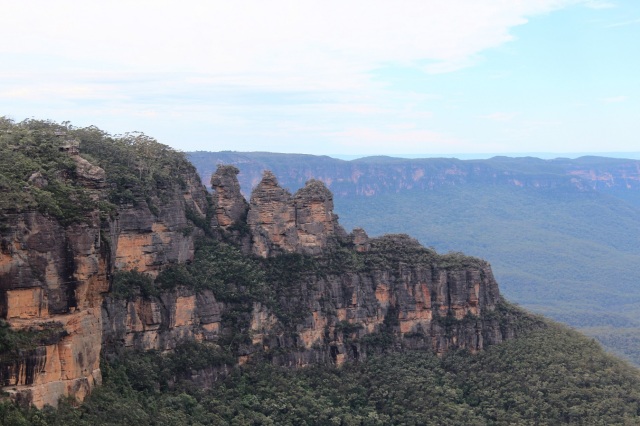 [The visitor center had a theater where they had a short production on the Aborigines.  Some of us went there . . . ]

[Others went in search of photo ops!]

[We’re heading to the ever popular (they’re found ’round the world) “scenic overlook.”] 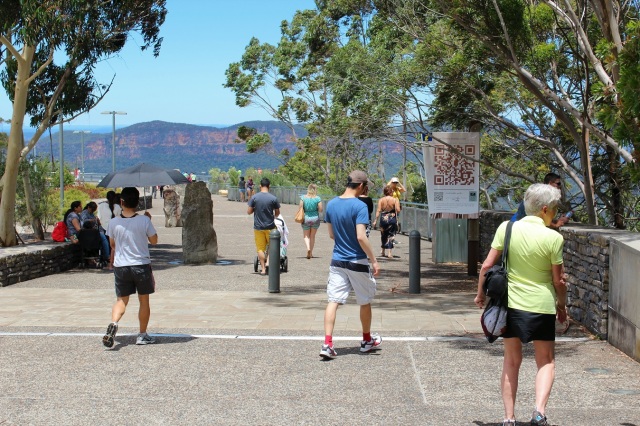 [And that’s what it’s called.]

[Can you see the walkway to the Sister on the left?] 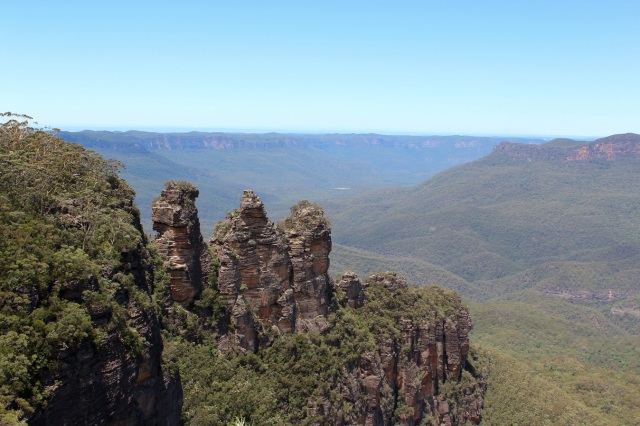 [Panorama, or an expansive view]

[We started the walk, then realized the sun was strong enough to melt lead, so we turned back . . .]

[To a more sane endeavor.] 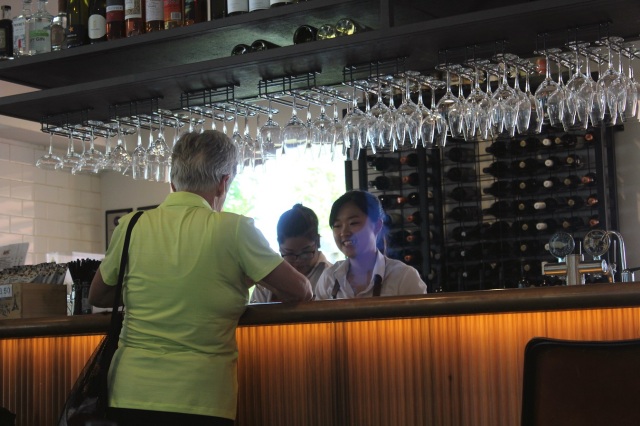 [Aaaah, an icy cold sauvignon blanc.  I sat inside in a wingback chair where a gentleman, with a wine in each hand, from merry old England stopped by for a chat.]

[Then the stop the ladies were waiting for.  It seemed unlikely that we were going to see any animals in the wild on these day tours, so how ’bout an animal park?

[A good spot to insert the Super’s photos (the next 7), because she loves critters!] 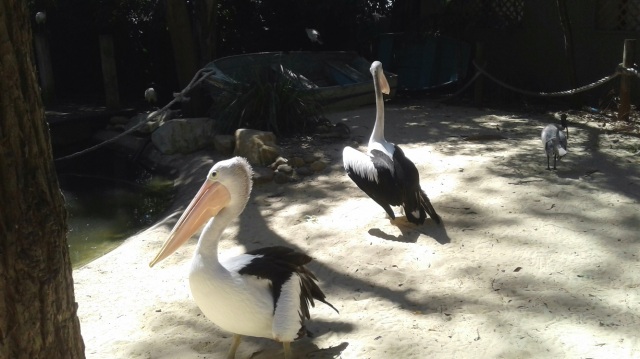 [Back to my photos, where we address the pithier matters of wildlife management.]

[Petting a ‘roo.  There are several species, and I believe this was the smallest.] 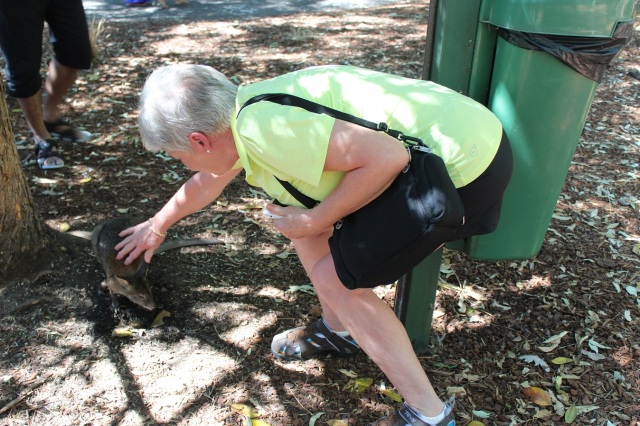 [And here’s your answer!] 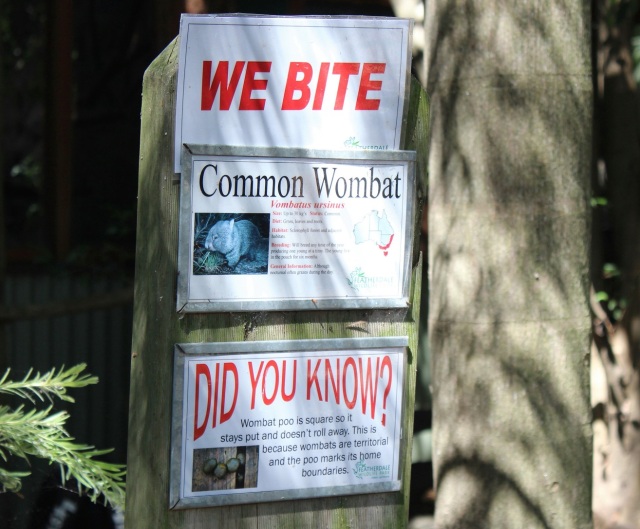 [The aforementioned wombat having a snooze in the 100-degree heat.] 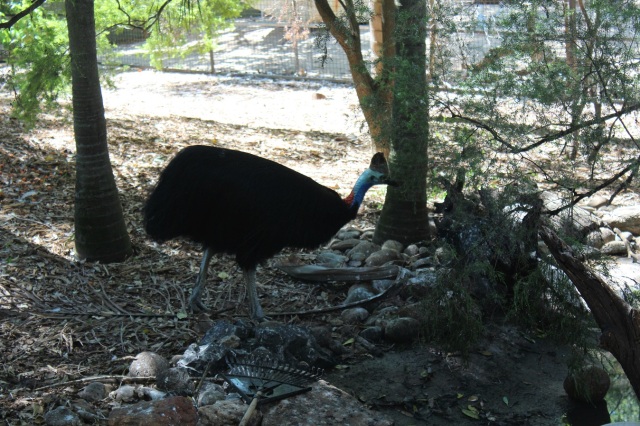 [I mean, seriously, can that really be a comfortable place to sleep?] 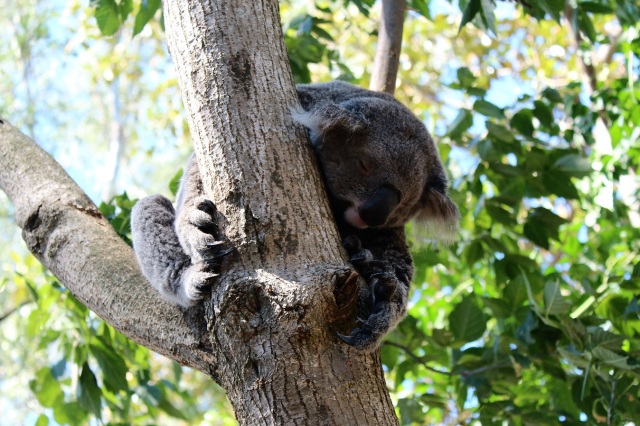 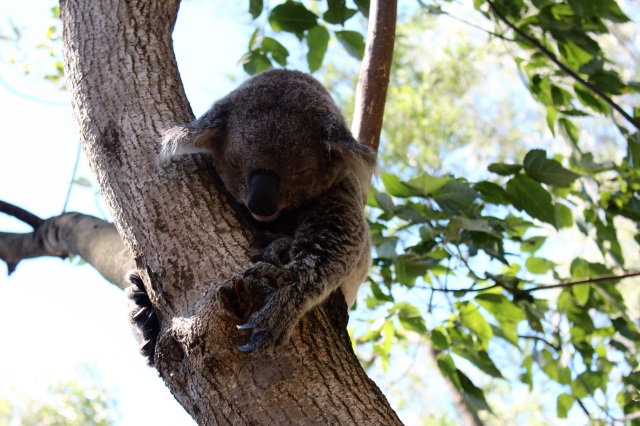 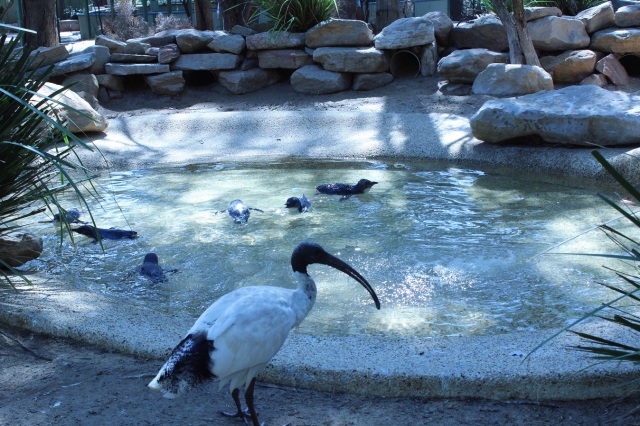 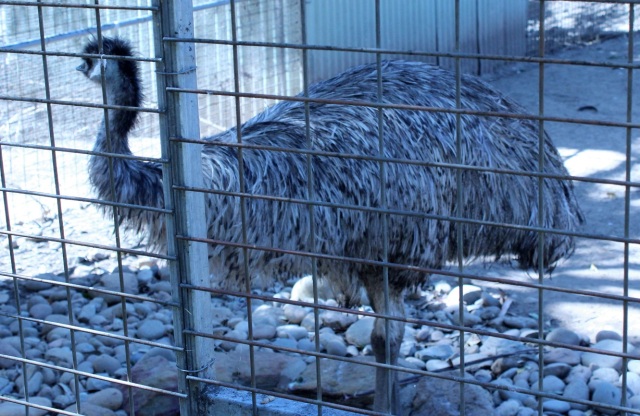 [And another ‘roo petting.]

[On the way back, our driver took us through the Sydney Olympic site . . . ] 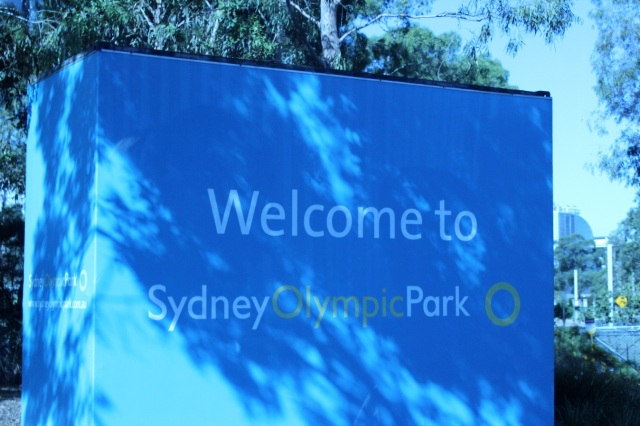 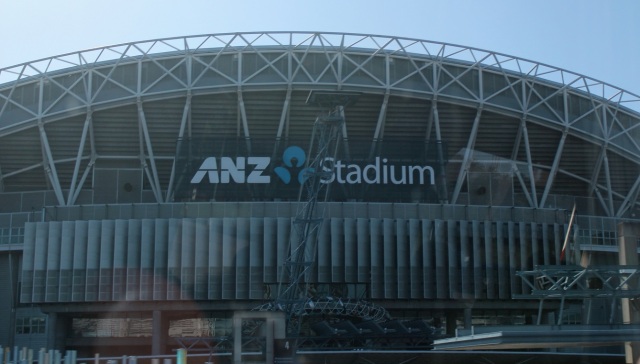 [Finally, I made a boo-boo earlier.  This is where we got on a boat to avoid vehicle traffic into the city.  Our bus driver noted this was something recently started because it literally is faster to deposit the passengers onto a boat for the ride into city center.]

There are no foreign lands. It is the traveler only who is foreign.  ~  Robert Louis Stevenson

3 Responses to Lands Down Under (Day 4)