By order, summer lingers through September
In Alexandria.
Alexandria! Alexandria!
I know it sounds a bit bizarre,
But in Alexandria, Alexandria
That’s how conditions are.
The rain may never fall till after sundown.
By eight, the morning fog must disappear.
In short, there’s simply not
A more congenial spot
For happily-ever-aftering than here
In Alexandria.

[Some day the greeting trees will be big!] 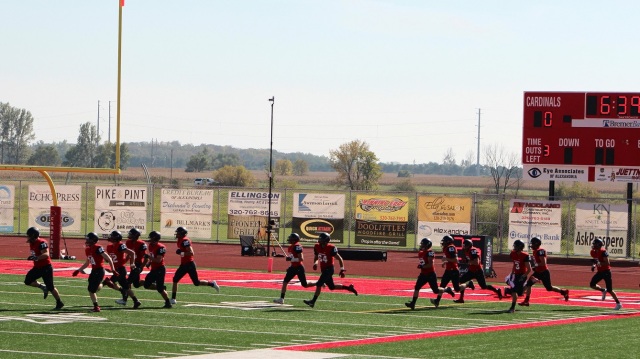 [Upon further review, no violation of state air quality regulations.] 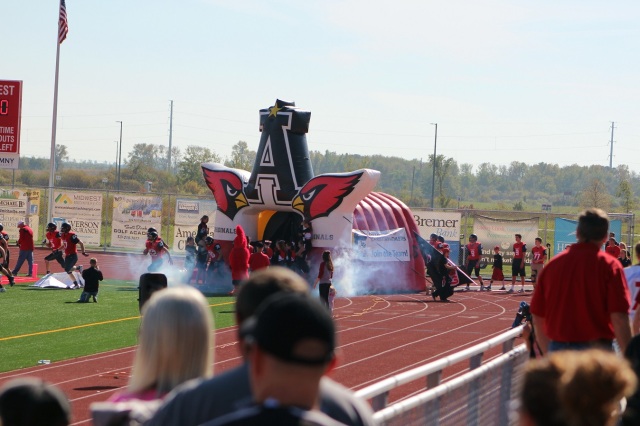 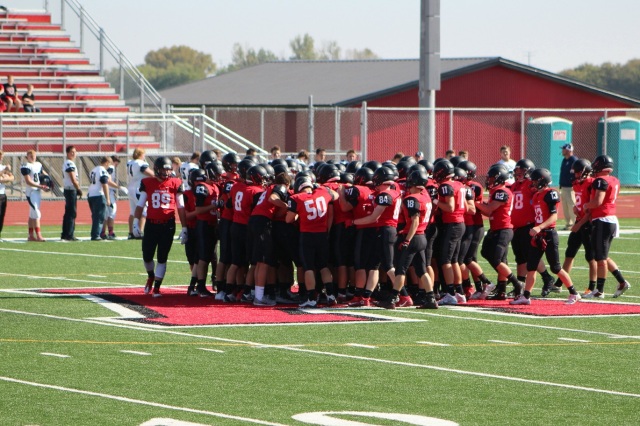 [The opening kickoff . . . by Jaran Roste (1) with the ball flat on the ground?  When Bemidji was introduced, their first player reportedly weighed 145 pounds. We thought . . . the kid must fly!  He was back on the kickoff, so maybe we decided to never put the ball in his hands?  We hard squib kicked the entire game.  BTW, Cardinal fans eventually also filled the Bemidji side of the field with probably a stadium attendance record.]

[Bemidji ran the ball all the way down the field on a long drive until the Cardinals finally held them on 4th down inside the 5-yard line.  This was our first play from scrimmage – a handoff to Micah Christenson (22).]

[Roste flairs left to Cody Faber (33).  I’m not sure what series this is, but I believe the Lumberjacks had scored again by returning a similar pass to the right that was incomplete but ruled a lateral – the Cards pondered, the Lumberjacks picked it up and ran 41 yards to a TD.] 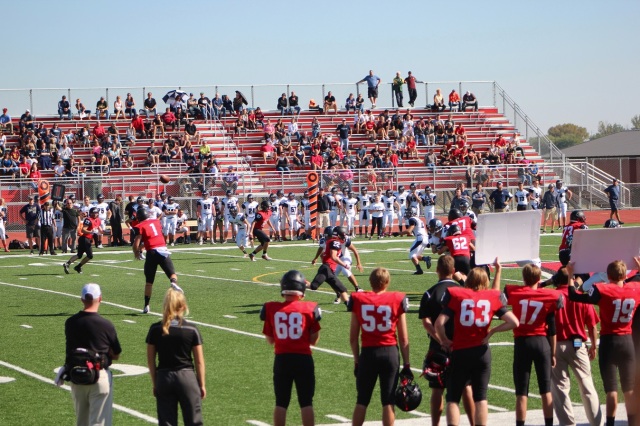 [Roste eventually scored on a 4-yard run.  Then the Cards scored again on a 56-yard pass to Thomas Anderson to take a 13 – 12 lead.  On the 1st play of the 2nd quarter, the Lumberjacks scored on a 27-yard pass (one of the few they attempted or completed) to make the score 20 – 13 in their favor.  That would be the Jacks last hurrah.] 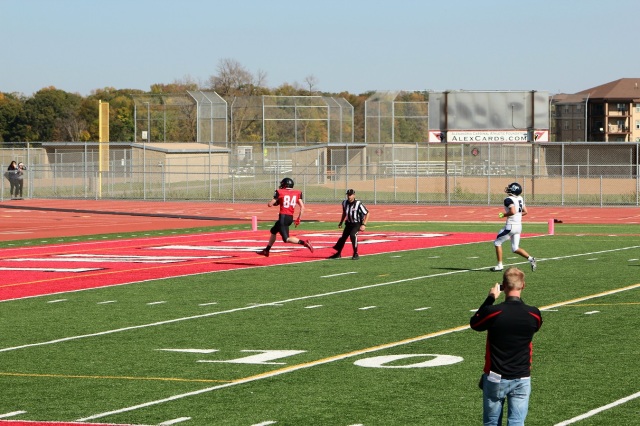 [The Cards were on a roll during which we scored 10 touchdowns on 10 possessions.] 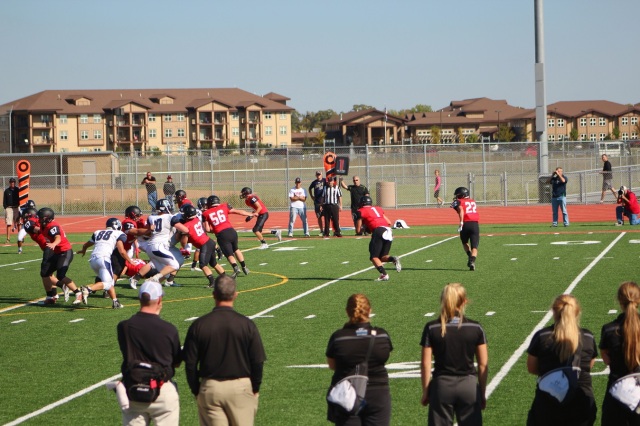 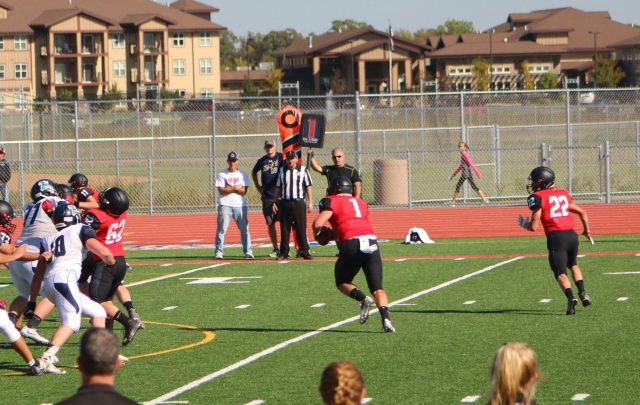 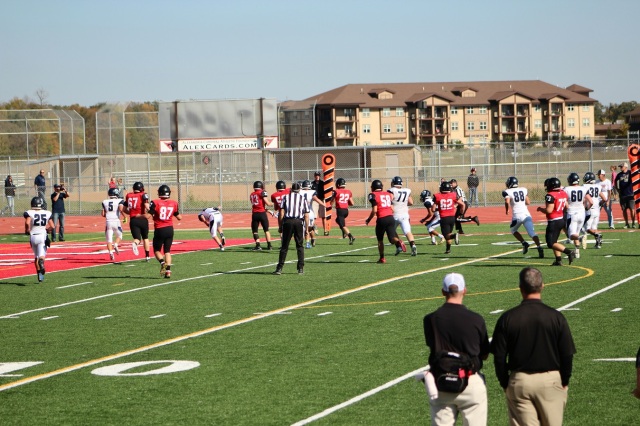 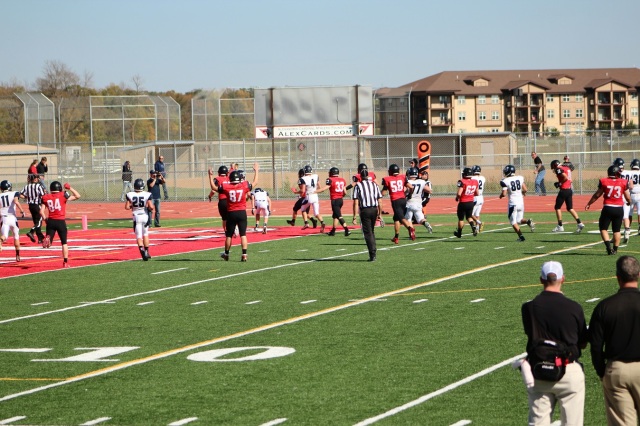 [And as you can tell from the time remaining in the 2nd quarter, the Cards had scored 4 TD’s in about 4 minutes.]

[Roste drops to pass, Hockert sprints up the left sideline.] 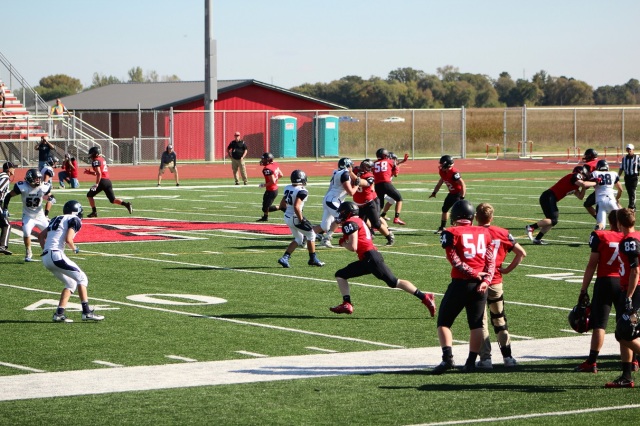 [Because I can’t see the ball?  Micah doesn’t have it?] 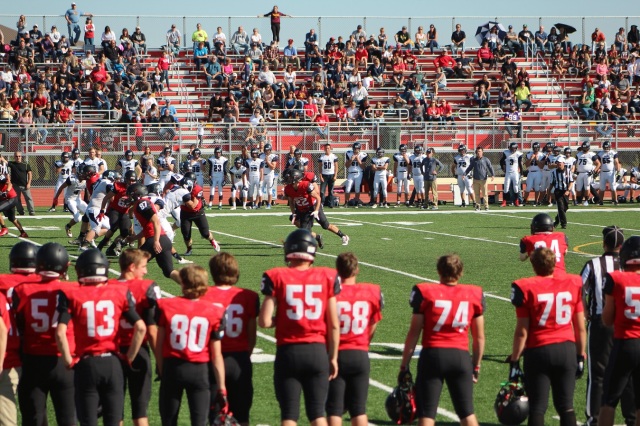 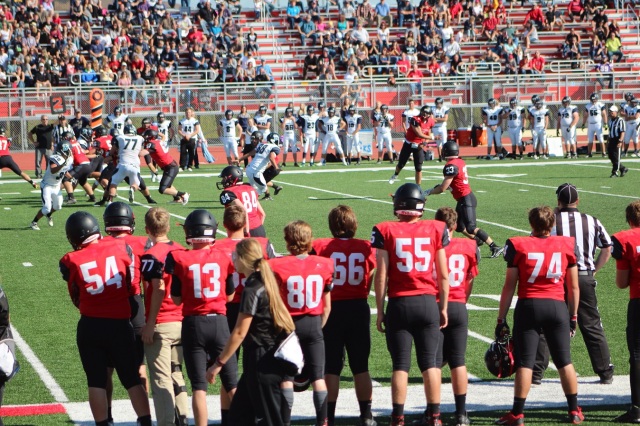 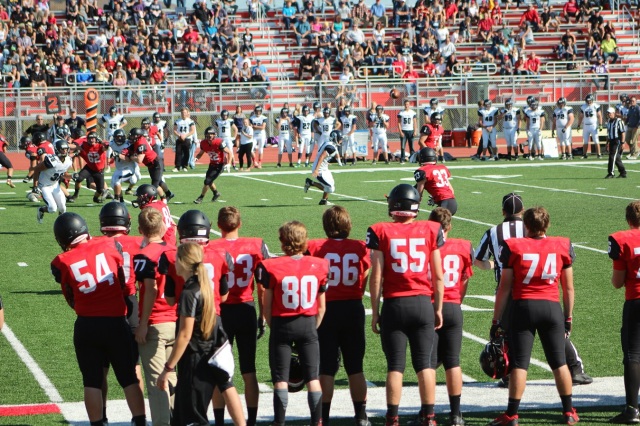 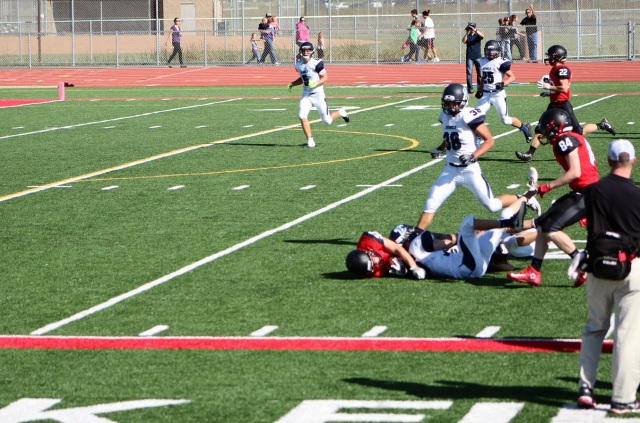 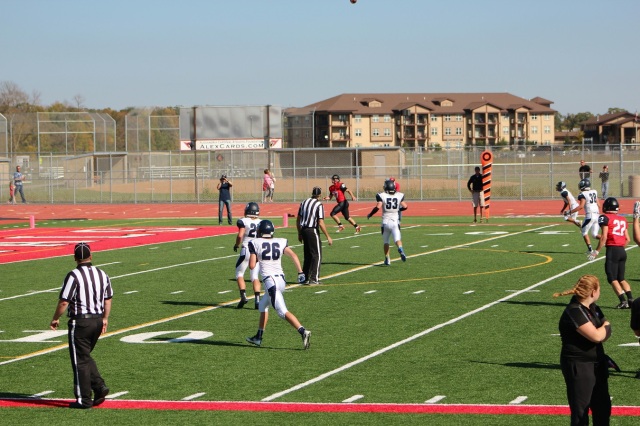 [Culminating in this 15-yard TD run by Jaran.] 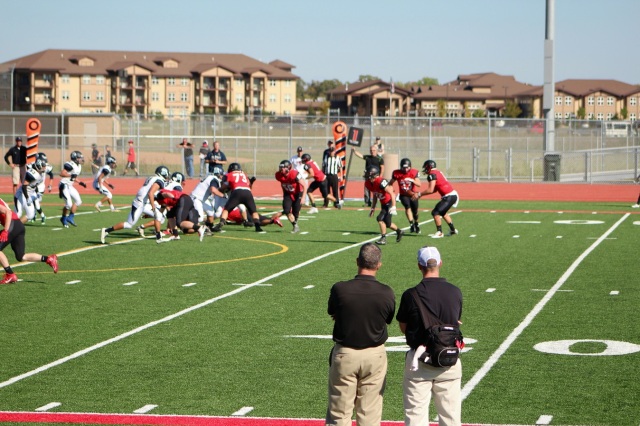 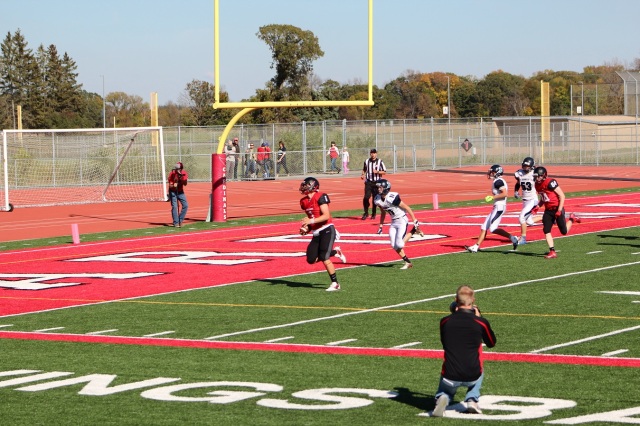 [Halftime score – yup, that was 7 TD’s in a little over one quarter!]

[Has a famous sister.]

[It’s halftime and here comes the Homecoming Royalty.  Your goal will be to see of you can identify each of the participants by comparing these photos to those contained in the flyer at the top of this page.  Helpful hint:  Each pairing contains one girl and one boy.] 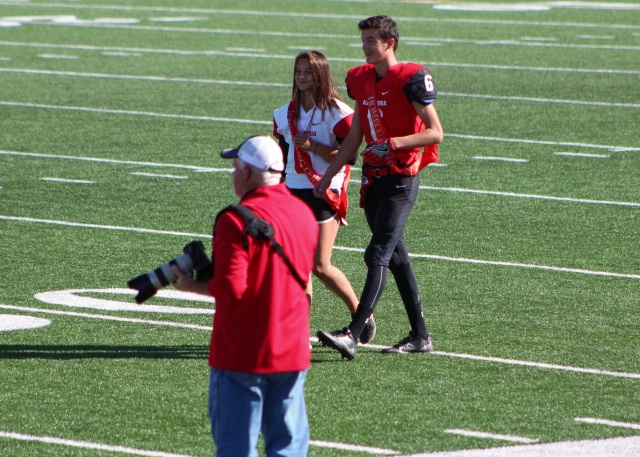 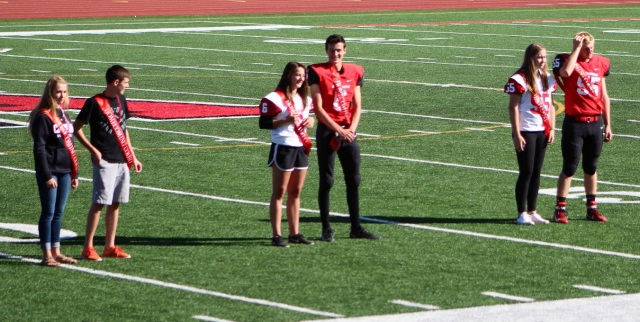 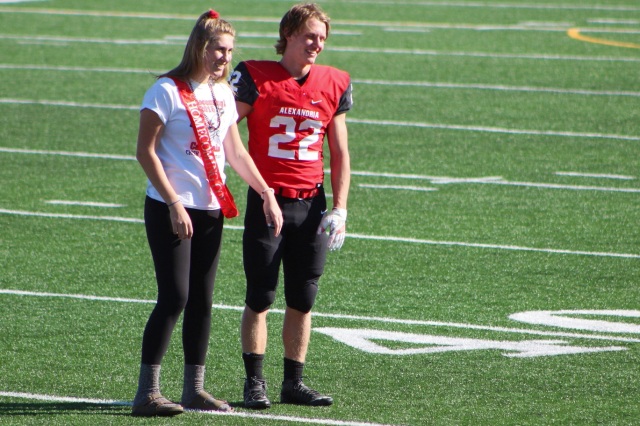 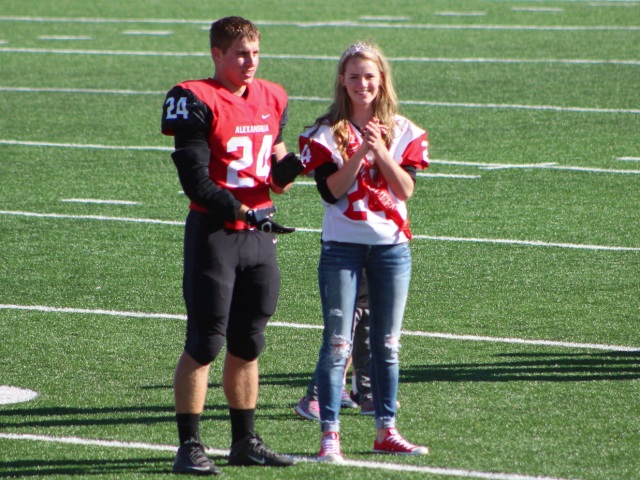 [No photos, please!  In some states, this is considered prison garb!] 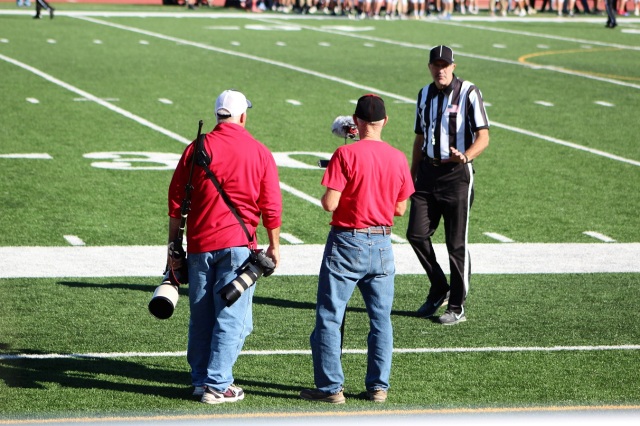 [Meanwhile, back at the football game, Micah and Cody prepare to receive the second half kickoff.] 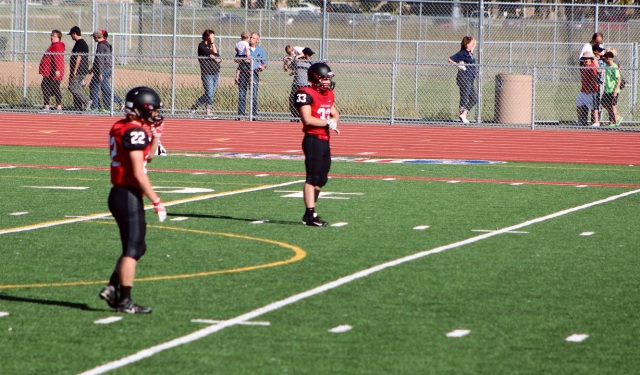 [Something’s happening at the far end of the field?  Due to the size of the crowd, it was difficult for Brad and I to amble (and sit) anywhere near field center.  So, the south end action was hard to shoot.]

[Something is definitely happening down there?  It was likely the 21-yard TD pass to John Urman.  We do have a lot of receivers who can make plays.] 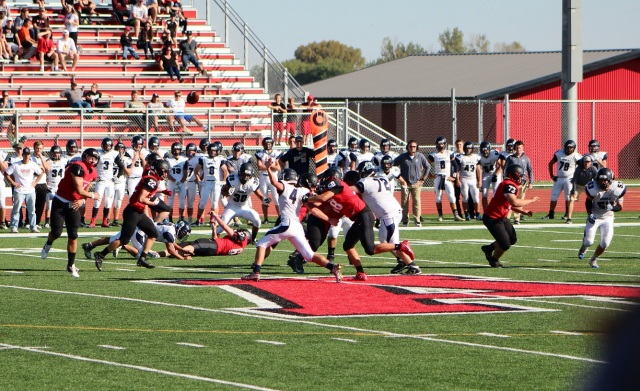 [This was the final score, though the game would not be over for more than another quarter.  The starters sat it out from here.]

[I fled the game before finish because the lead seemed safe halfway through the 4th quarter.  Made a bee line to the winery to meet friends, and Anthony.  Then a bee line to SAWA with said friends, and Patchouli.  Not a bad day.] 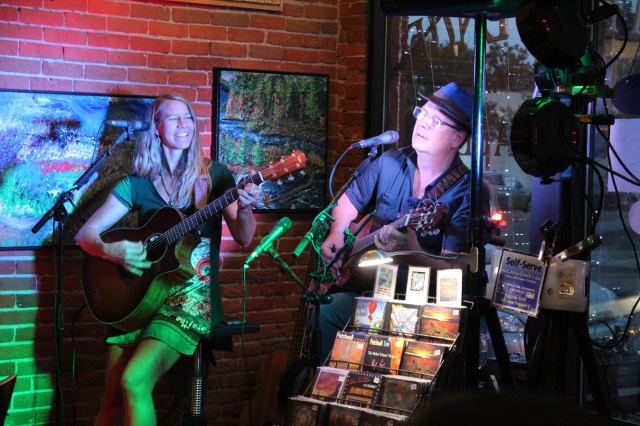 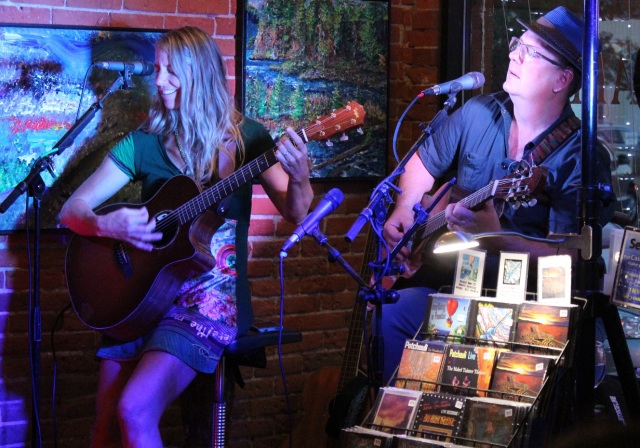 [We subsequently learned that Roste’s day of 5 TD passes and 4 rushing TD’s set a state record of 9 TD’s in a game!  Photo from Echo Press.]

Senior quarterback Jaran Roste puts a move on a Bemidji defender during a run in the third quarter on Saturday afternoon. Roste set a state record for most total touchdowns in a game with nine after he threw for five scores and ran for four more. (Eric Morken | Echo Press)

[Photo by Voice of Alexandria.]