[So, Regensburg.  Raise your hand if you know anything about Regensburg.  Yea, me neither.  From the cruise map, we know it was between Passau and Nuremberg.  We docked in Deggendorf and took buses into Regensburg where we discovered yet another delightful historic city, the oldest city on the Danube.  This first shot out the bus window almost looks like we’re coming in for a landing.  Oh, Pope Benedict XVI is from here.] 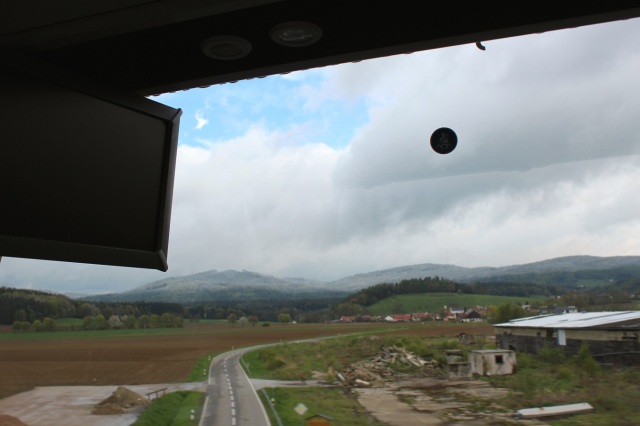 [Our “get off and start the walking tour” point.  The weather continued to be chilly, gray, and windy – this was possibly our coldest day yet with some snow flurries.]

[A commercial street leading to Stone Bridge and into town.  If we could find this street later, we could find our way back to the buses.] 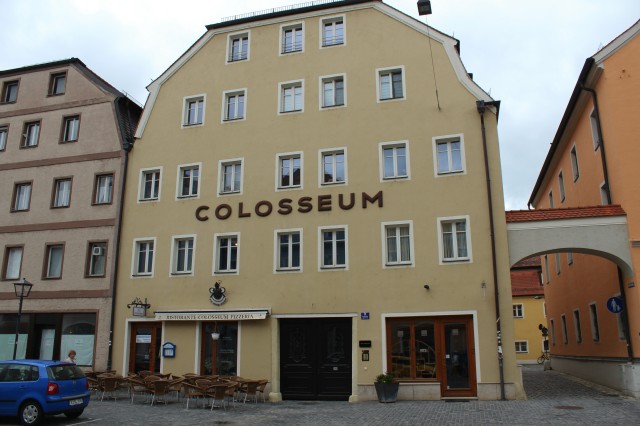 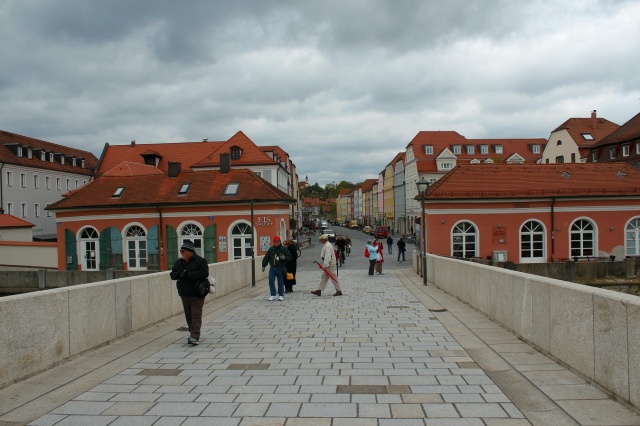 [Our guide did her best to keep us warm with information . . . ]

[John appears to halt . . . wondering whether it’s safe to cross?]

[Then the most popular tourist attraction, the historic Wurstkuche, allegedly the oldest such place on the planet – sausage on a roll . . . DEE-LISH!  (OK, more on that further down the page.)] 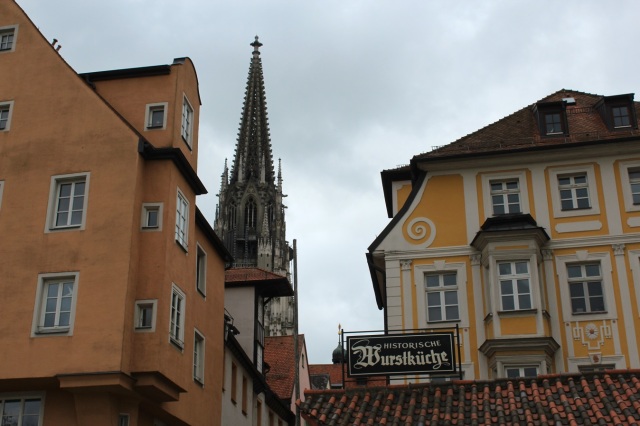 [And the sausage restaurant – it’s the first destination for all visitors to the city.  To prove that point, two members from our boat crew were already exiting there by the time we arrived.]

[This David and Goliath mural has been re-touched many times and dates back to the 16th century.  Oskar Schindler lived here for a while in 1945.] 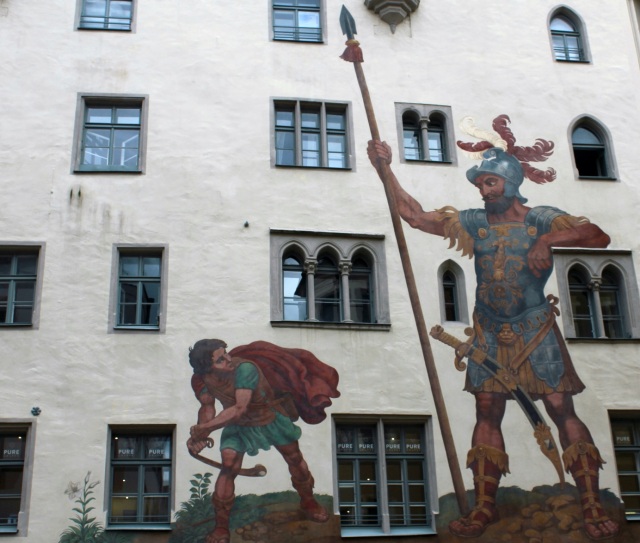 [Regensburg Clock Tower and entrance to Old Town – 10:05, too early for lunch.]

[After much research, this is known as a pink building in Regensburg!] 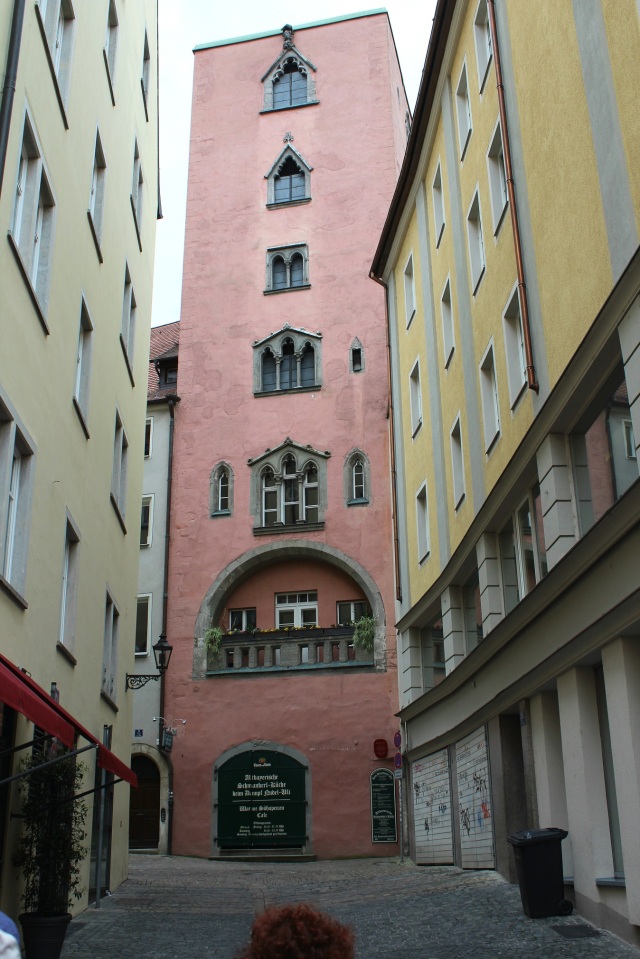 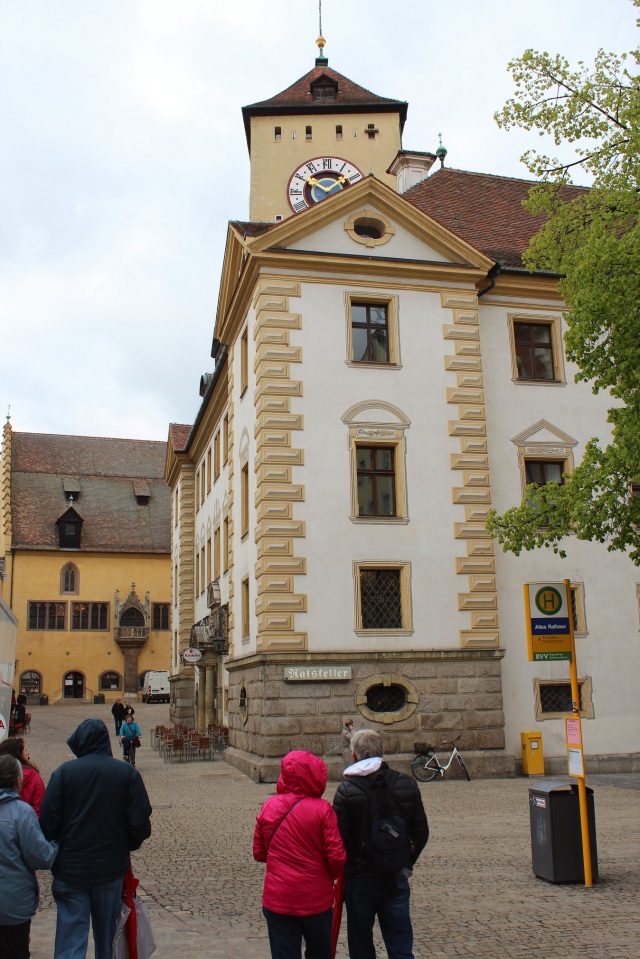 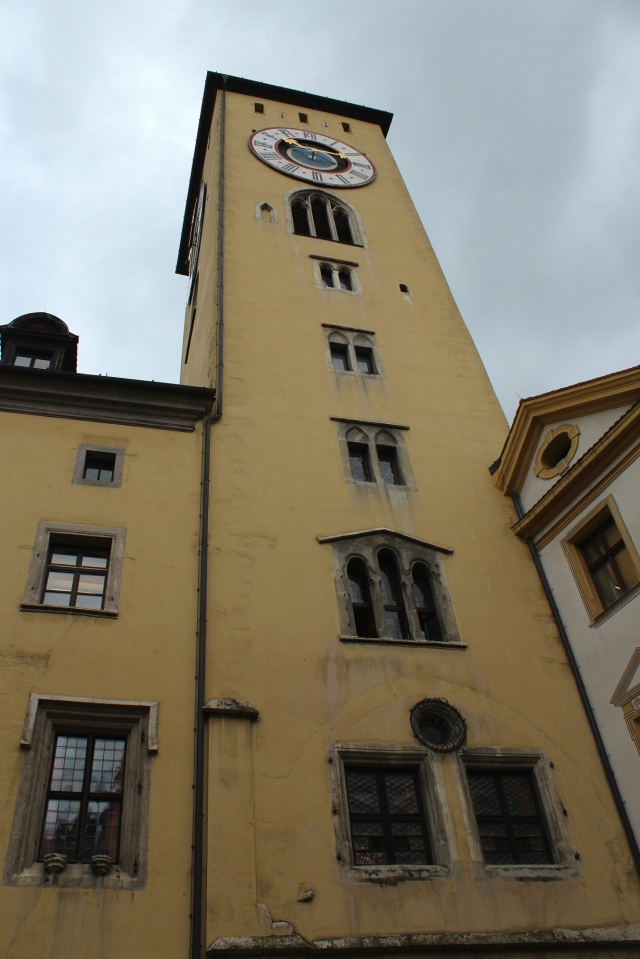 [“Door to Old Town Hall” –  Germany does not recognize church weddings so people who wish to get married must make it a legal union at the city hall. If they wish to formalize it before God with a religious ceremony, they do that the next day (From Viking River Cruise Journal).]

[The potato guy (no town should be without one)]

[That Donald Trump!  He has beauty pageants everywhere!  (OK, maybe not his?)] 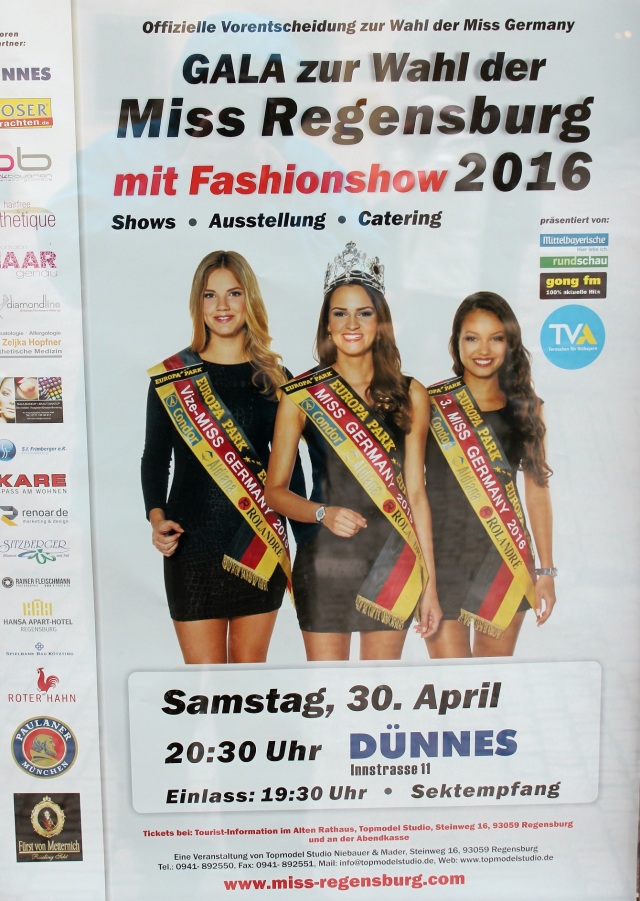 [The norm for the most part is you pay to pee.  The smiling “toilette” signs that this is a place you can pee for free!  Woo-woo!] 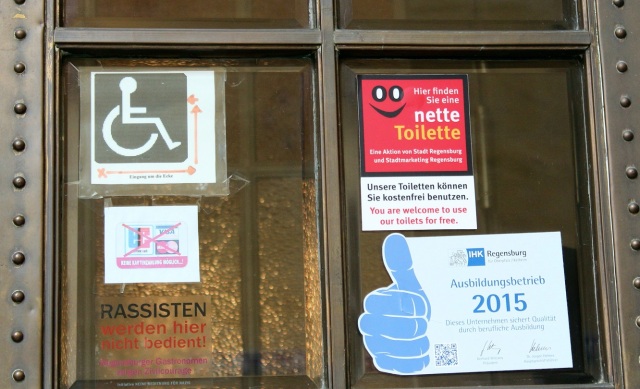 [A gargoyle mayor “mooning” the public after a surprise victory.] 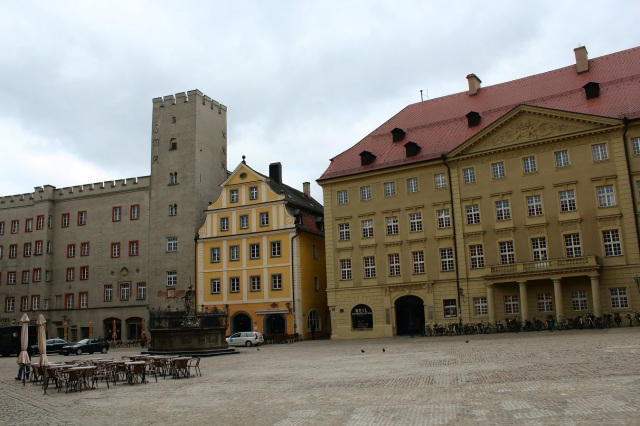 [Our guide was totally nonplussed (to her credit) about leading us here for the public restrooms.  Ha!] 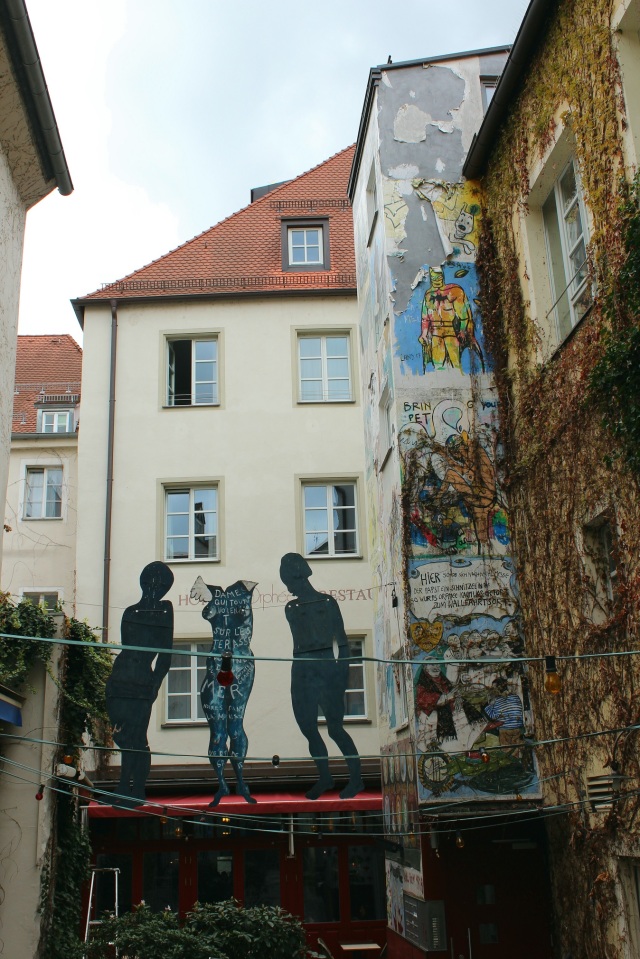 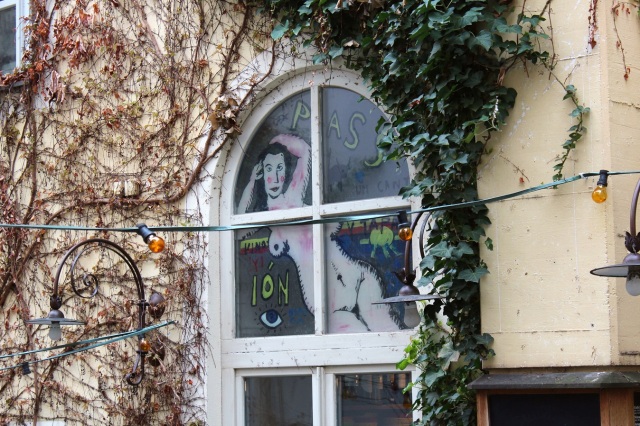 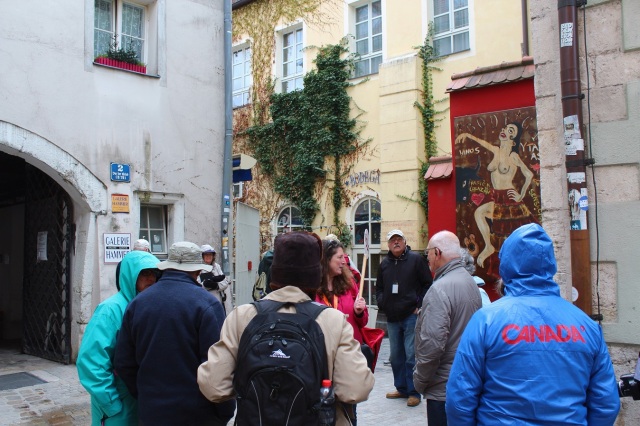 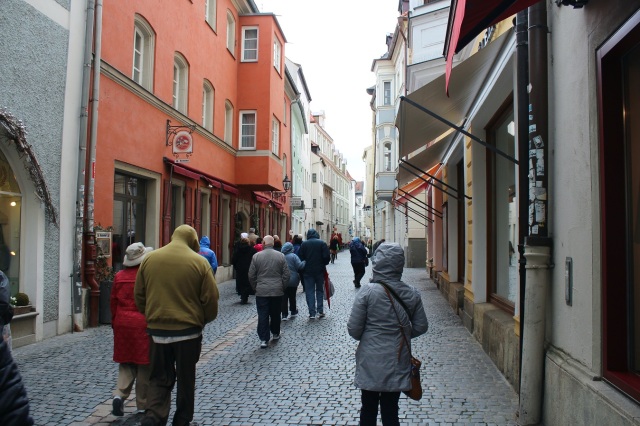 [Markers in the cobblestone with names of Holocaust victims.  We were told other cities in Germany decided not to do this because they were uncomfortable with the idea of their memories being trod upon.] 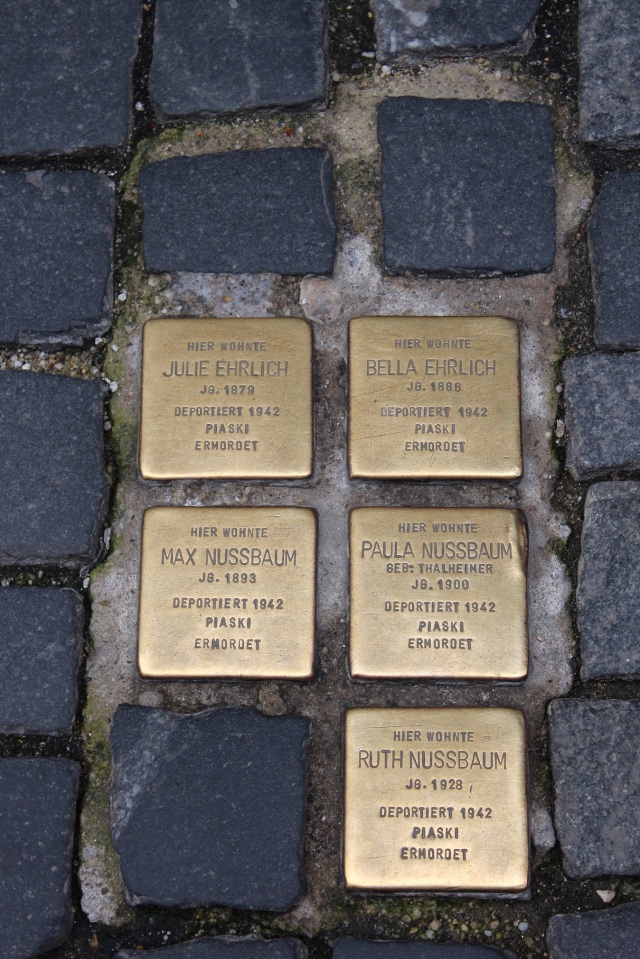 [The Neupfarrkitrche is a Protestant parish church in Neupfarrplatz (OK, the open city square), c. 1520.] 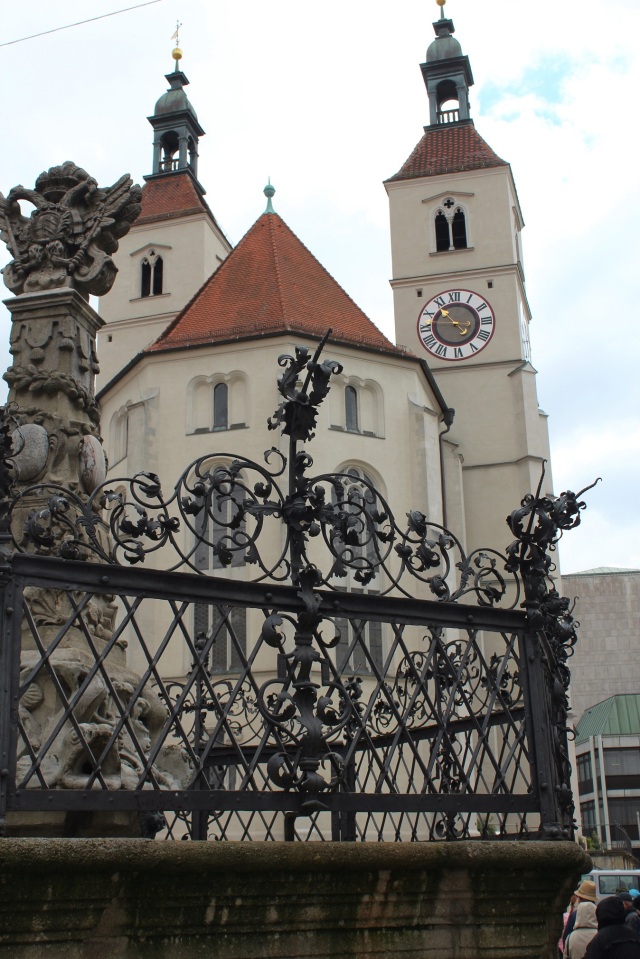 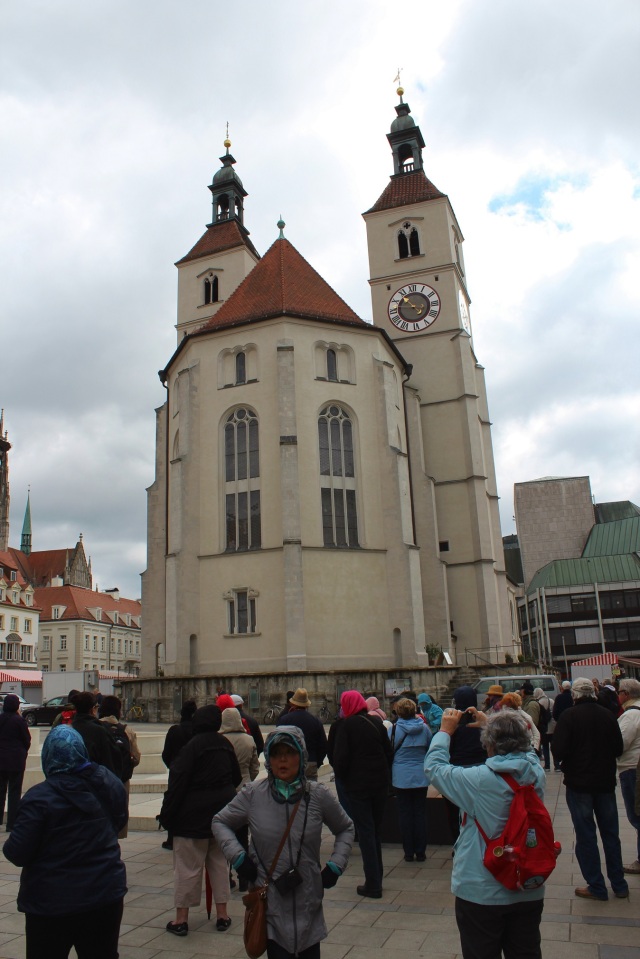 [The Super took advantage of the surroundings in this “platz” to do a little window shopping.]

[So, you put your debit card in here, touch the Euro button, et voila!] 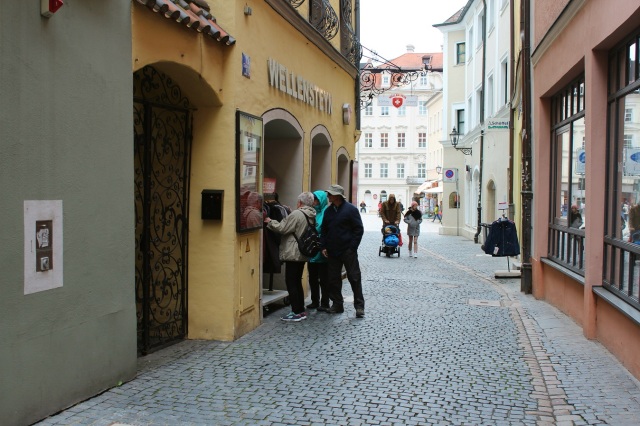 [Apparently in recognition of some bizarre and obscure European sport.] 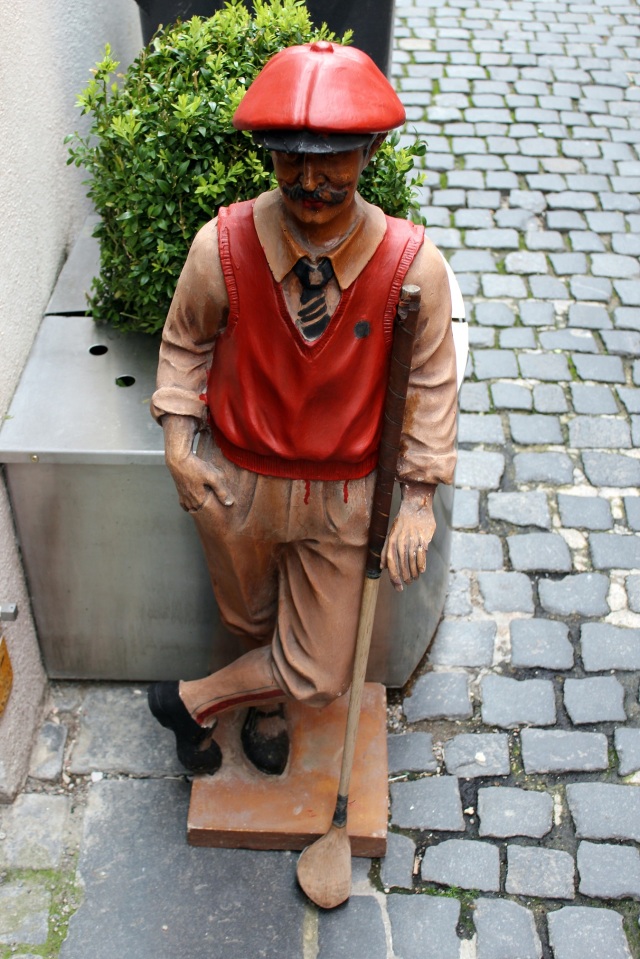 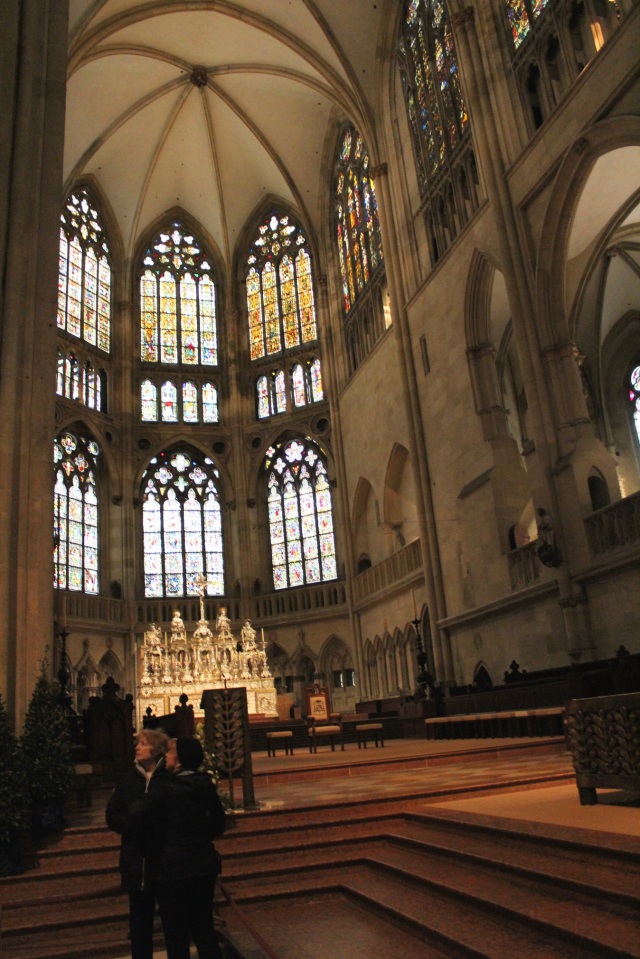 [OK, this was pilfered from the internet.  It’s just that she looked so happy to be in Regensburg on a warm, sunny day.]

[Don Juan . . . of Austria, the illegitimate son of a local girl from Regensburg and Austrian Emperor Charles V. Don Juan led the Spanish navy in the defeat of the Turks in the famous naval battle of Lepanto in 1571.  Yes, I had to look this up.] 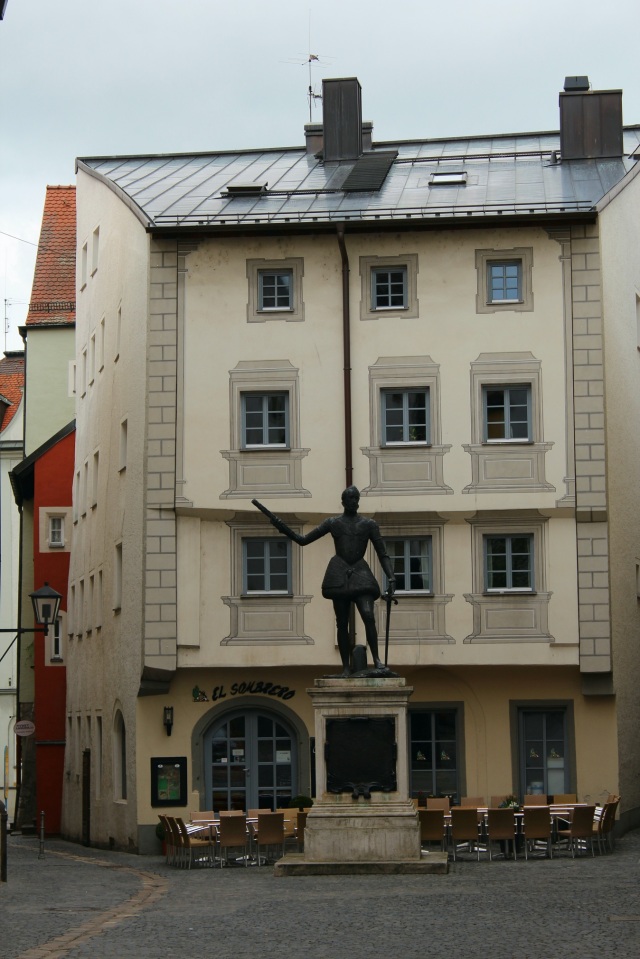 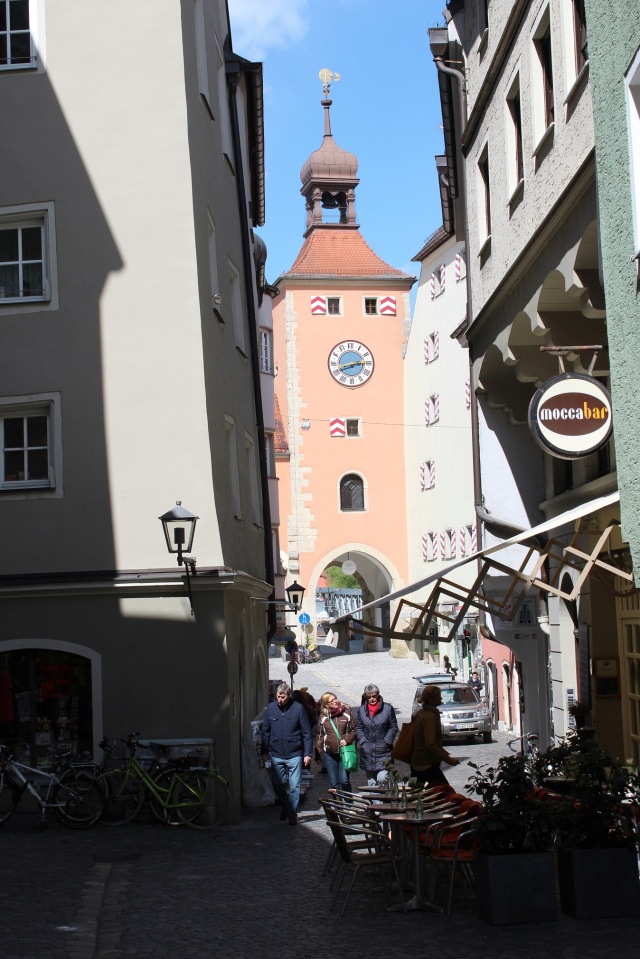 [From Wikipedia:  The Historic Sausage Kitchen of Regensburg (German: Historische Wurstküche zu Regensburg) . . . is notable as perhaps the oldest continuously open public restaurant in the world.

In 1135 AD a building was erected as the construction office for the Regensburg stone bridge. When the bridge was finished in 1146 AD, the building became a restaurant named “Garkueche auf dem Kranchen” (‘cookshop near the crane’) as it was situated near the then river port. Dockers, sailors and the staff of the nearby St. Peter cathedral workshop were the regulars for the centuries to come. The present building at this location dates from the 17th century,[1] but archaeological evidence has confirmed the existence of a previous building from the 12th century with about the same dimensions.

. . .  when the family who currently own the restaurant took over in 1806, charcoal grilled sausages were introduced as the main dish offered.

The kitchen still operates today (daily 8AM–7PM, except holidays) and serves 6,000 sausages to guests daily. Sausages are the main dish[2] on the menu and come in portions of six, eight or ten, along with sauerkraut and mustard. Renowned Bavarian dishes such as Franconian “Saure Zipfl”, “Krautwickerl” and “Sauerbraten”, as well as a variety of salads etc., are available.

During the summer tourism season, most of the guests are served outside on wooden benches/tables, as the tiny building barely seats 35 inside.] 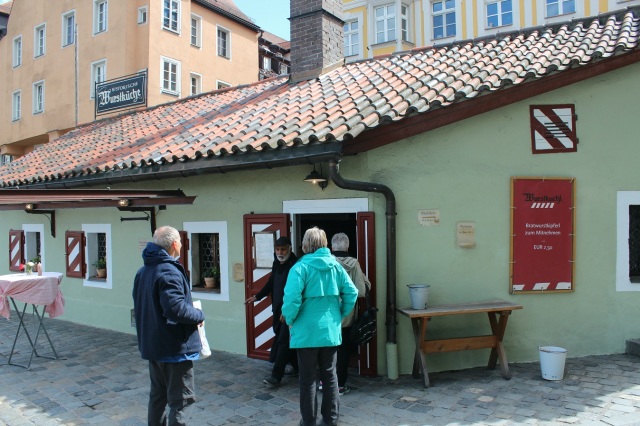 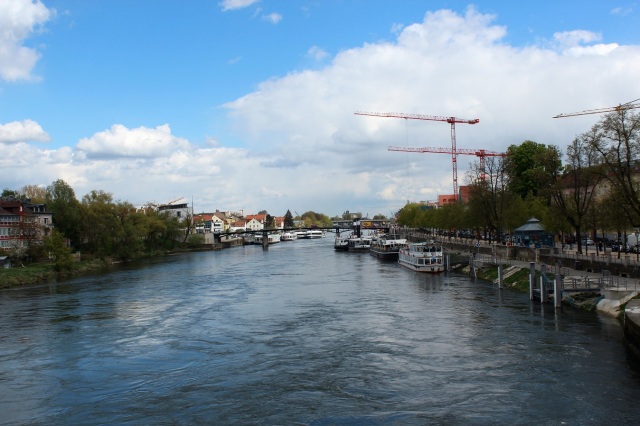 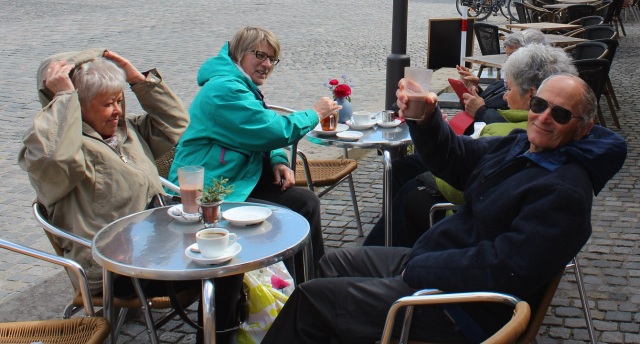 [This building seems . . . Netherlandy?  We’re on the bus heading back to the boat.] 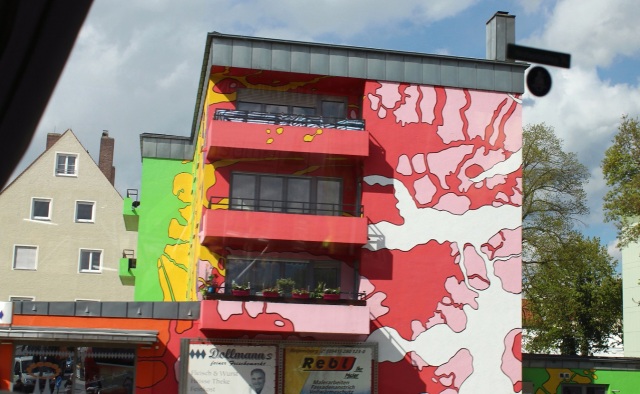 [A drive across the idyllic German countryside.] 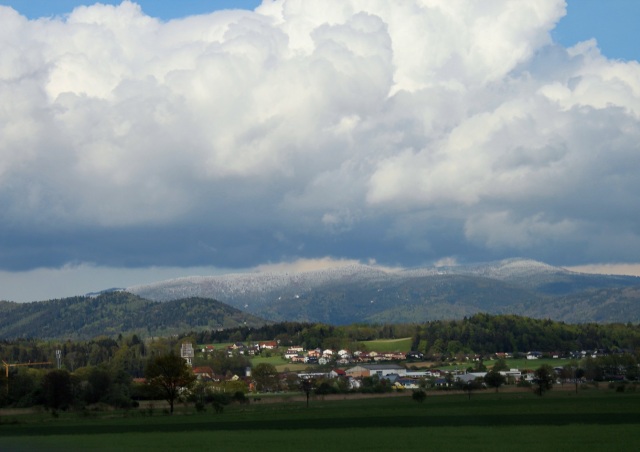 [We knew before the cruise even started that this would be our last night on the Embla.  The locks between here and Nuremberg were still out for annual maintenance so we would be bused there to board our new boat, Aegir, for the rest of our journey.  We would miss the fun loving Katja, our hotel manager, and the rest of the staff save for Violeta and Mirjana, our program director and concierge, respectively, who would be continuing on with us.] 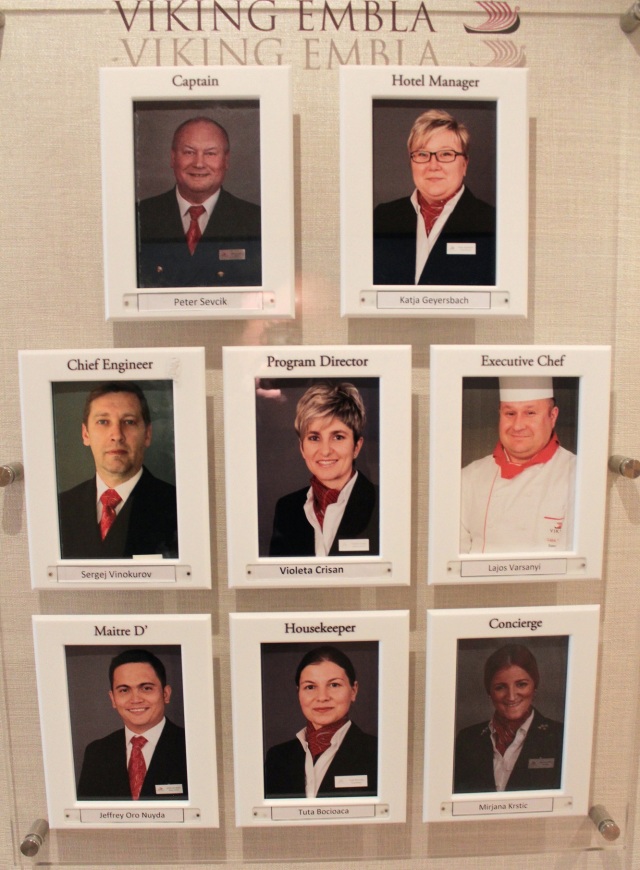 [And so our last dinner on the Embla.] 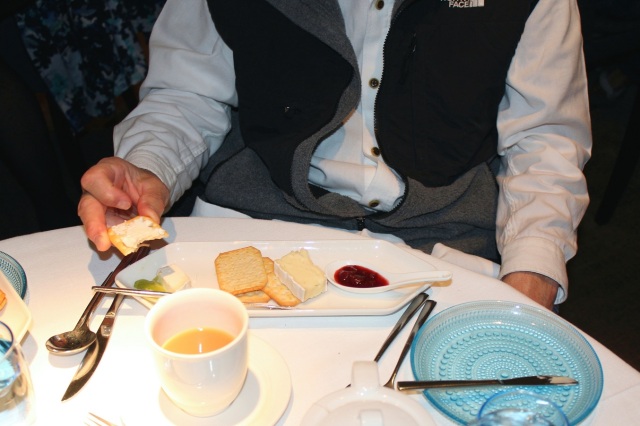 If you reject the food, ignore the customs, fear the religion and avoid the people, you might better stay home.  ~  James Michener