*Originally to be entitled “A Pretty Good Weekend” . . . then Orlando happened.

[OK, no photographic evidence of the Salty Dogs at SAWA on this night (because we would have some two days later).  But their fan club did arrive late and took this selfie.] 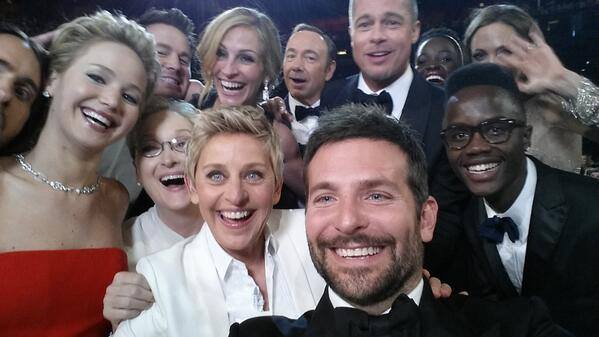 [The Cardinals were at the state tournament for the first time since 1995.  They drew the No. 1-ranked team in class AAA in the first round- Mankato West was 23 – 1 (or was it 24 – 1?) for the season and their star pitcher was 20 – 0.  West scored 3 runs in the first inning – they only had one more runner reach base the rest of the game.  The Cardinals lost 3 – 2, but they out played and out hit the No. 1 team.  The Cards came back that afternoon and beat Mahtomedi 8 – 4 in the consolation bracket.  (The photos are the from Echo Press – the team photo from section championship last week, the next day was the last day of school.)]

[Forecast for the day: Temperature in mid-90’s; severe thunderstorm watch over the entire state; pollution alert over the southern 2/3’s of the state because of high temperatures and little wind. Actual: Temperature 89, sunny all day, enough of a breeze to make it tolerable even for me as an elite, select group of fans withstood 4 hours outside at the winery with Anthony.  (First photo by the Super.)] 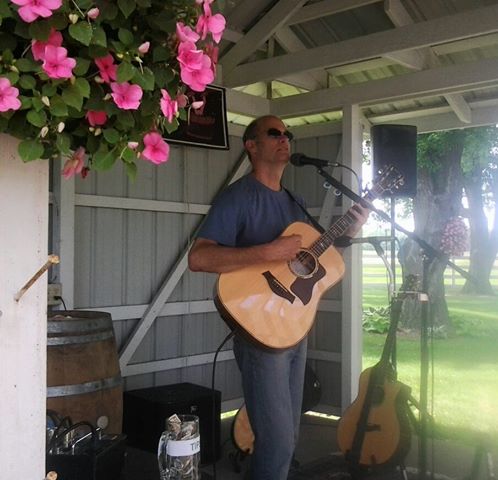 [Collective Unconscious tore the house down that evening with this (well, this video, on loan from YouTube, is from six years ago), their last encore song (2 1/2 hour concert). Their tribute show to Crosby, Stills, Nash and Young drew a full house to Theatre L’Homme Dieu, the first show of the year that traditionally starts summer as all the snowbirds are home and reunite here. Terrific show . . . particularly the 2nd half!  Did you know, Crosby, Stills and Nash first performed together at Woodstock – and this was their first song?  Did you also know they only had one No. 1 hit (kinda like CCR)?  See, go to concerts, learn stuff! And all the while I’m thinking, if only our grandkids could see us now! Bunch of 70-year olds, whooping and hollering, waving our arms around like a bunch of teenagers! It completed a 6 1/2-hour live music day for the Super and me, in Vacationland USA.]

[The Cardinals beat Becker, 5 – 1, to win class AAA consolation bracket.  Since Mankato West went on to win the AAA championship, a case can be made that the Cards were the best team at the end of the year.  They played flawless defense all through the section and state tournaments and were a really fun team to watch play.  (Photos from Echo Press –the first of Calley Richardson crossing home plate after her first inning 3-run homer.)

[Another beautiful day at the winery – with the Salty Dogs, “Uncle Pen,” a wedding party, and hundreds of our close personal friends.]

[The Cardinal girls’ track team won the state class AA (the biggest schools) meet!  Bethany and Megan Hasz finished their fabulous high school careers by finishing 1st and 2nd in the 1,600 (Bethany just missed the state record by .2 seconds) leading the way.  The Cards blew away the 2nd place team by .25 points!  Great weekend for Lady Cardinals!  (Photos by Doug Hasz, who claims a relationship to the runners of the same last name.)] 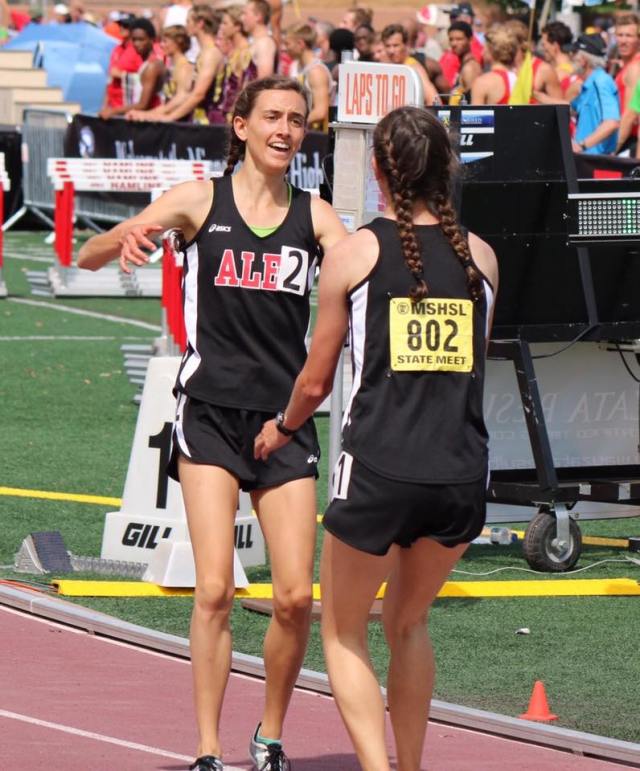 [Harper’s Chord – making their first appearance in Alex since last June.  Their groupies showed up en masse, even from outside the immediate 5-county area.  Paul Drinkwine is now performing solo; so the new group makeup is Dave Lumley, Jill Moore, Micah Barrett, and Roger Fink.] 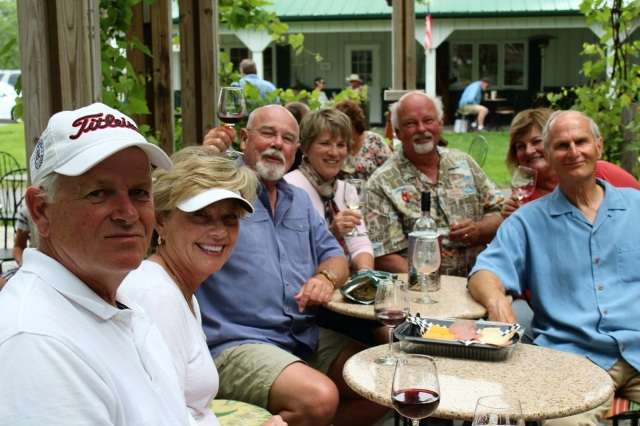 [As a result of unmitigated badgering from the attendees, the group played this song early on (and again when said lead attendee had to leave early)!]

[Jill (lest you were wondering)] 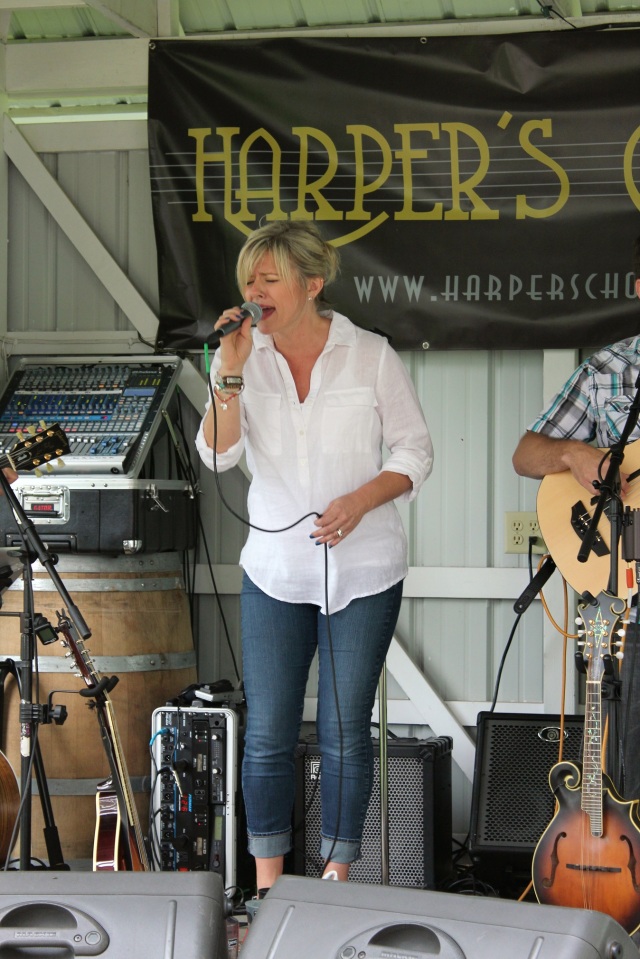 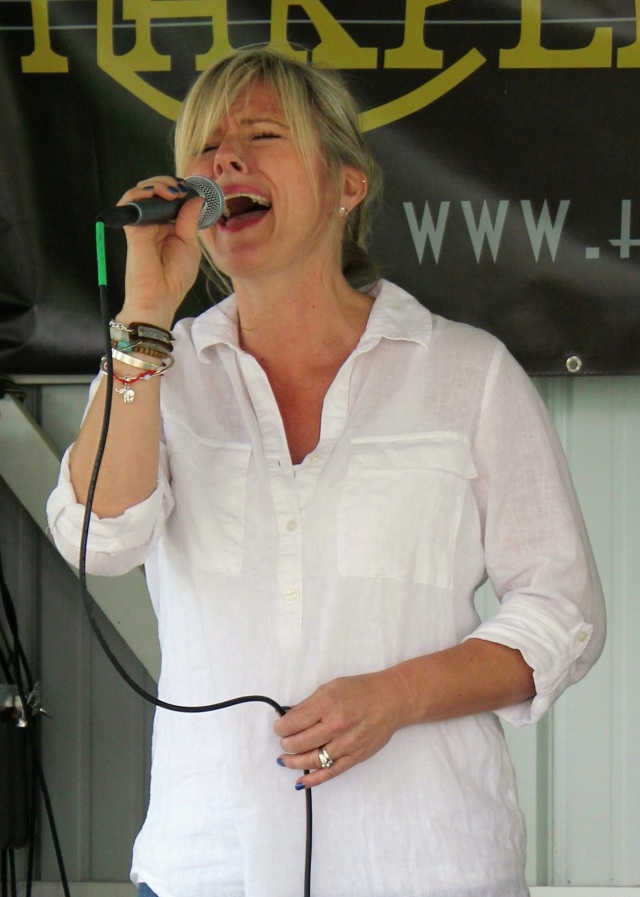 [Though major fans, they were not the badgering attendees.] 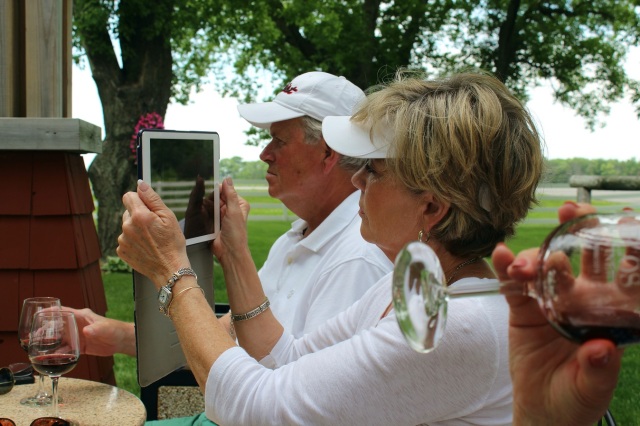 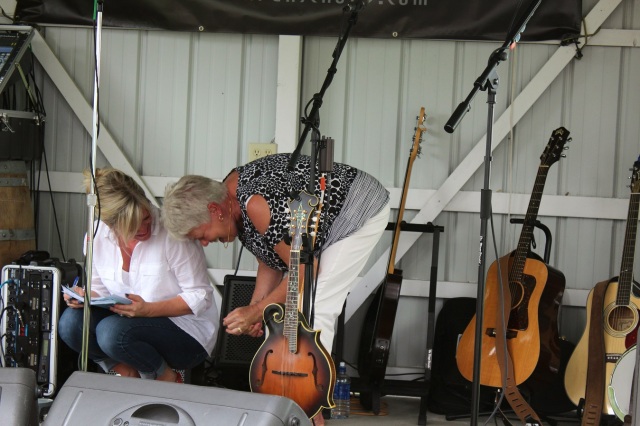 [I gave her a funny look when she walked out of the winery carrying a glass of wine.  Noting my expression she said, “It’s a beer for my dad.”  (We all did that, right?)  The Super reporting to Jill about her elementary-age daughter, Harper, for whom the band is named.] 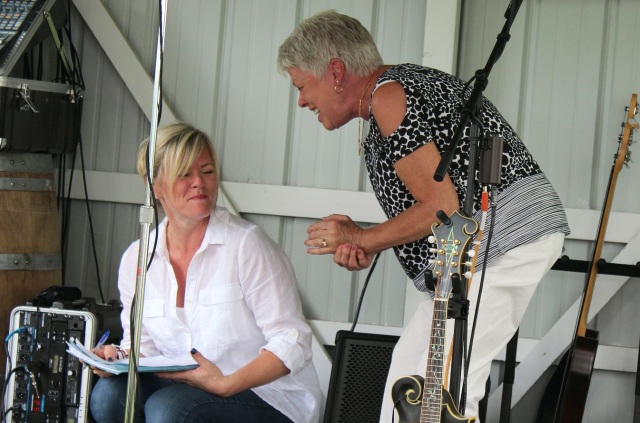 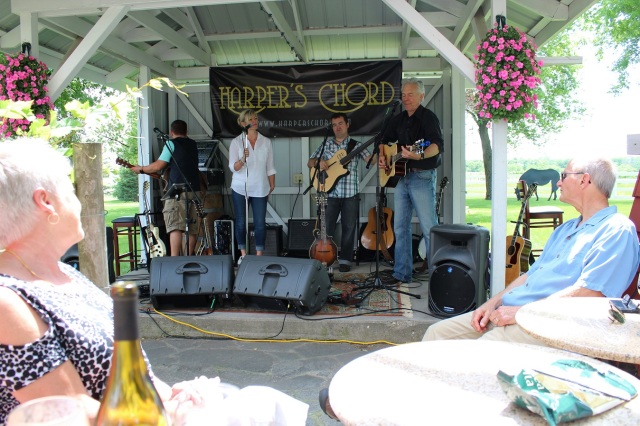 [Likely the 2nd performance of “Travelin’ Soldier” as the Etniers had to leave early.]

[With everybody perusing their various media devices, we could see a storm was moving in – and thus, that’s what the band had to do.  We all acted as roadies to move them inside as fast as we could.]

[Still, with all the electronics of the modern band, the tear down and set up took at least a half an hour.] 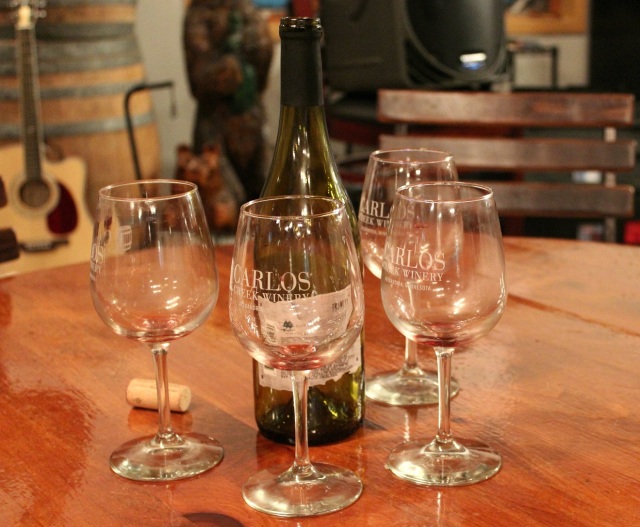 [These are the same folks you previously saw outside.] 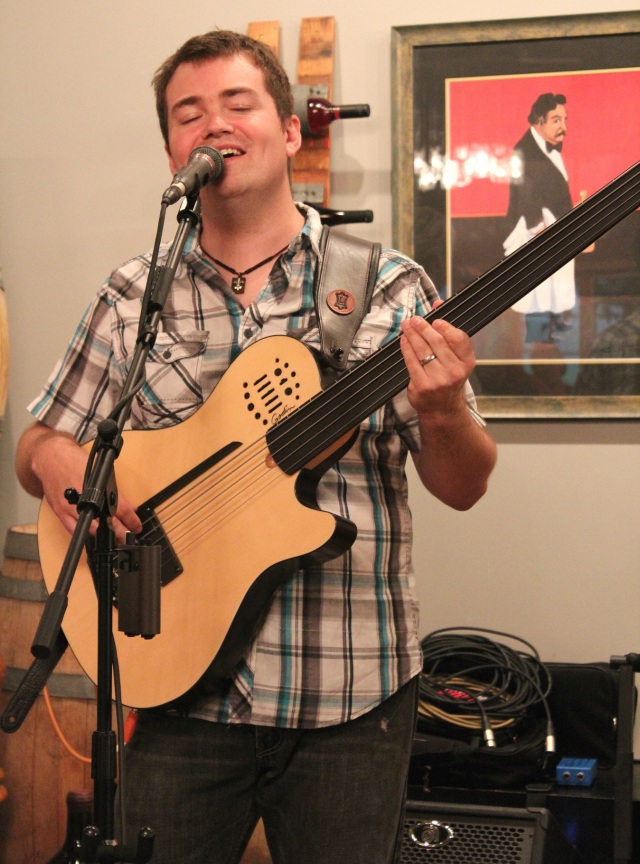 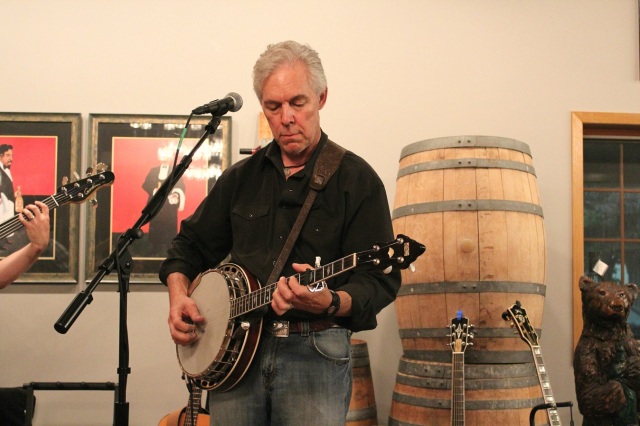 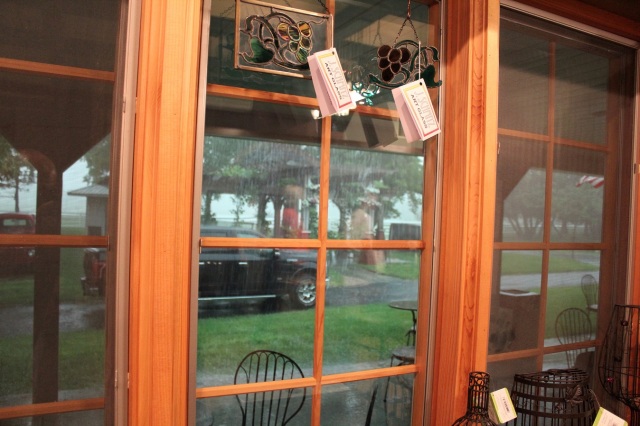 [An encore request from the hardcore fans.  This is a Roger original.  The video is from two years ago, but it’s good because it sets up its origin.]

The only reason why we ask other people how their weekend was is so we can tell them about our own weekend.  ~  Chuck Palahniuk, Invisible Monsters

Up Next:  Maybe Vienna?