OK, we were admittedly conference champs before the game even started.  We could do no worse than a tie for the championship when we beat Tech on Monday . . . and later learned Willmar lost on Monday so they had no chance for the title even if they beat us.

And it was senior night.  We had one, Kalley Blade.  Kalley never had the opportunity to get much playing time, but she really seemed to be appreciated by her teammates as someone who contributes in ways other than just game days.  Losing just one senior, of course, means pretty much the whole team is back next year.  We have more juniors than Brach’s has jelly beans – even the JV has juniors.  Where are all these players going to be next year, when you also try to make room for a new corps of JVers?  Likely a situation the coaching staff really doesn’t mind? 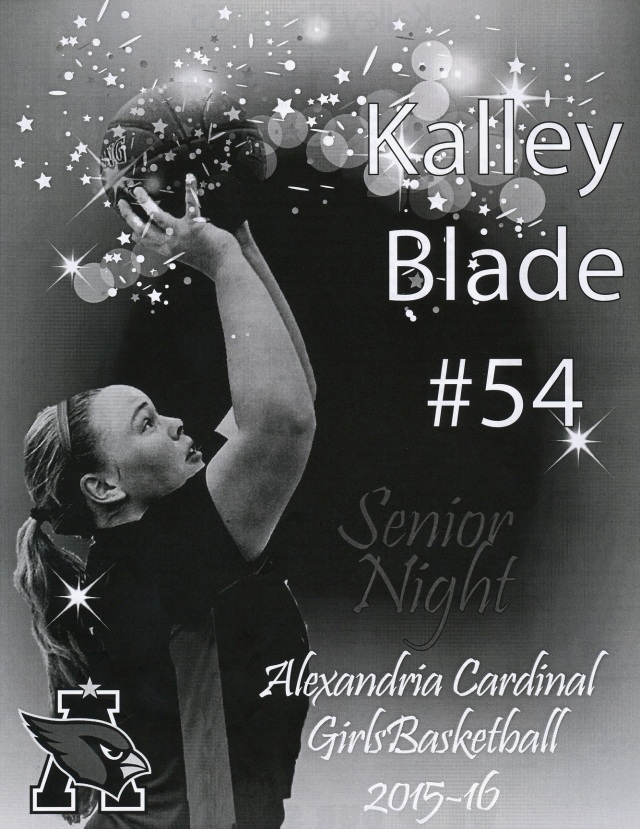 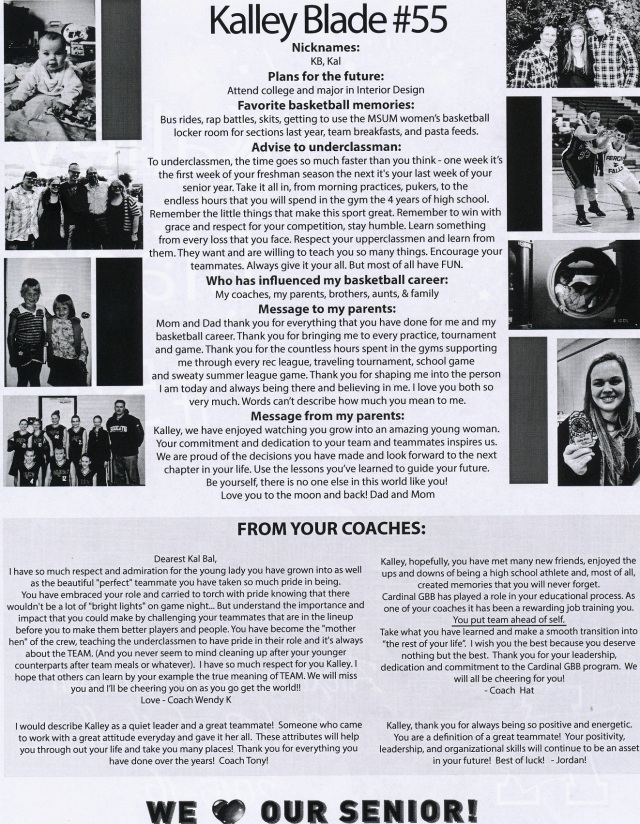 [The JV game . . . we pulled it out at the end.  Here’s a player I’m sure the coaching staff is keeping a sharp eye on.  Kaye Paschka (51) is a freshman who we hope hasn’t had her growth spurt yet – because she always appears to be the fastest player on the court.]

[Maggie Slagle (15), Elise Stockmoe (41) (and her sister Lauren (33) featured in some following photos), Courtney Gould (53), all juniors and all good players caught in the varsity numbers game.]

[“The Voice” moved to the top, for back support?  Where’s Evie?] 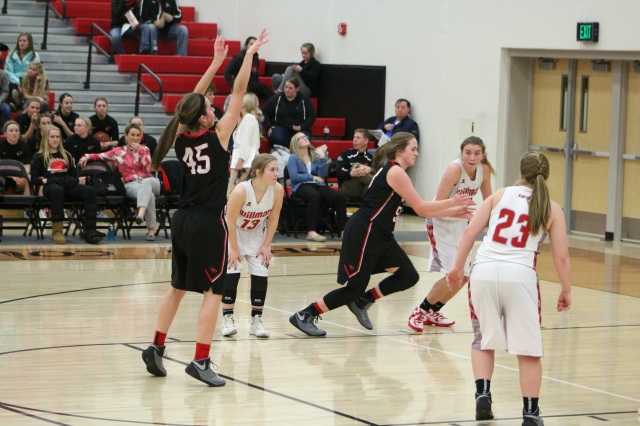 [Wrapping up a very good season for the JV.]

[The varsity game, a tribute to senior Kalley Blade, the Amazing Mr. Ripley was there for school photo coverage, and it was BEACH NIGHT for the student fans.] 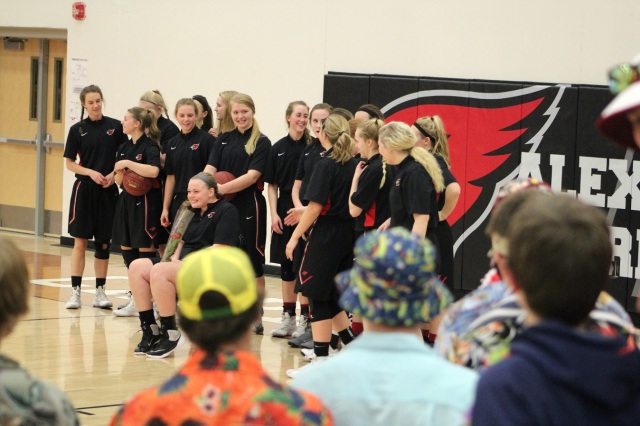 [And we’re underway as our Kayla Feldhake (43) gets the tap.]

[I believe that despite her head first slide, Kendall Kohler (3) was called out by the umpire.]

[Probably because the conference title issue had already been resolved, our Cardinals apparently decided to see if we could come back from an early 10 – 2 deficit?] 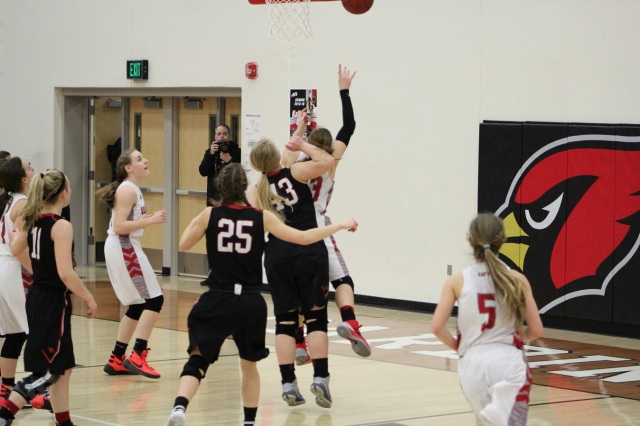 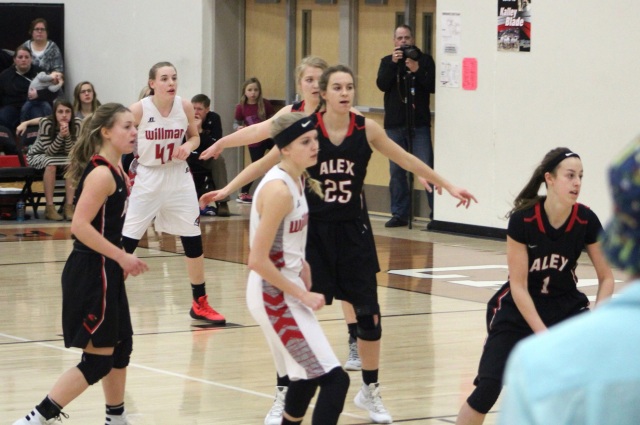 [Although not here (as I recall), a sign that our offense was not totally in gear was that Macy actually missed a couple of free throws!  Say what?]

[Schmidty at the point of the all-court press.]

[Another sign we were a bit out of sync as a team.  Macy was bringing us back all by herself.  At almost halfway through the 1st half, it was Willmar – 12, Macy – 10.]

[Kelby Olson-Rodel (13) brought so much defensive energy to the game, she was in early foul trouble and, as I recalled, fouled out late.] 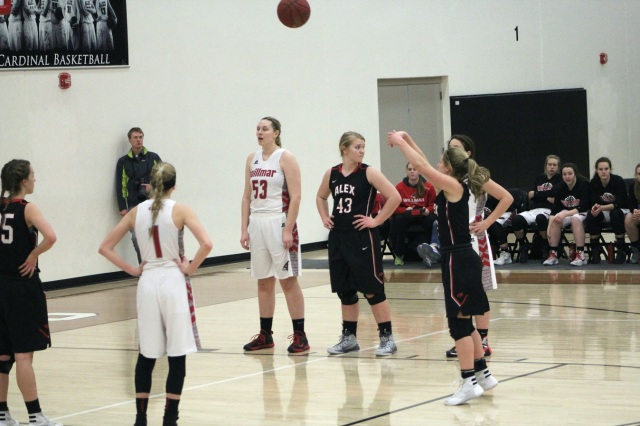 [Kiyana Miller (21) hit a nice mid-range jumper.  I’d like to see her take more of those – otherwise our offense revolves around 3’s and layups.]

[Their center is 6’4″, and obviously impossible to stop when she gets the ball in low. We did have a mobility advantage in the post.] 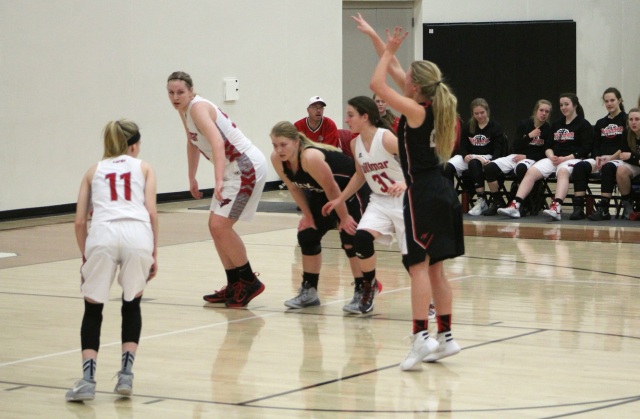 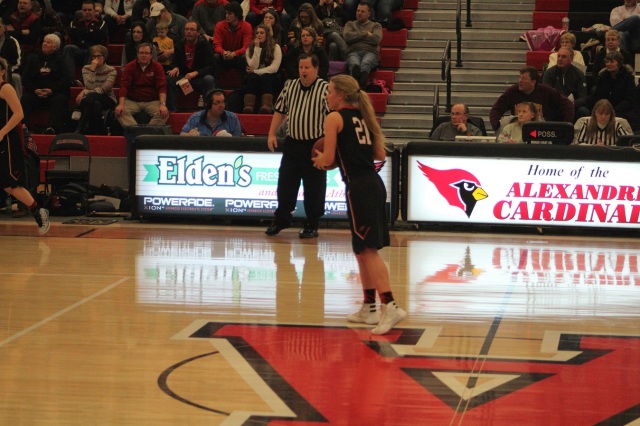 [The defenses were good on both sides which made offensive play raggedy.]

[Then at the start of the 2nd half our Cardinals put on a display that makes them really run to watch.  No more Mr. Nice Guy.  We went into a full bore, in your face, triple team defensive pressure that created multiple Willmar turnovers.  I’m sure Willmar was counting to make sure we only had 5 players on the court.  Our scores off turnovers projected us into a comfortable double digit lead we held for the rest of the game.  Here Zig and Macy lead the offense.] 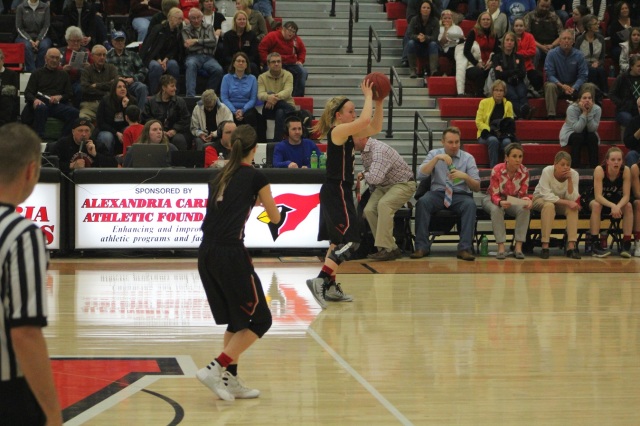 [Mmmmm, could that be Kim Kardashian?]

[Schmidy and Kayla battle for a rebound.]

[We interrupt this basketball game to bring your regular scheduled programming (during basketball games).  Once again, hockey goalie Amy Jost leads the student section on a roller coaster ride.  It was obviously beach night (we expect most of our snow to be gone this weekend as the winter than never was (so far!) continues) – nobody told the senior fans.  Hey, I have Hawaiian shirts!  Anyway, the Amazing Mr. Ripley covered the action from the other side, undoubtedly for various school publications.] 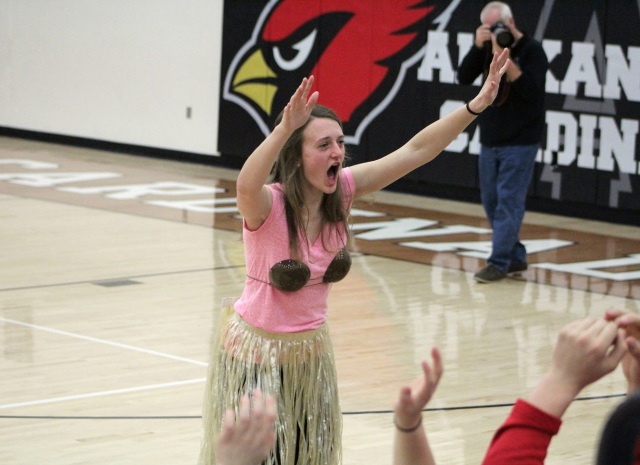 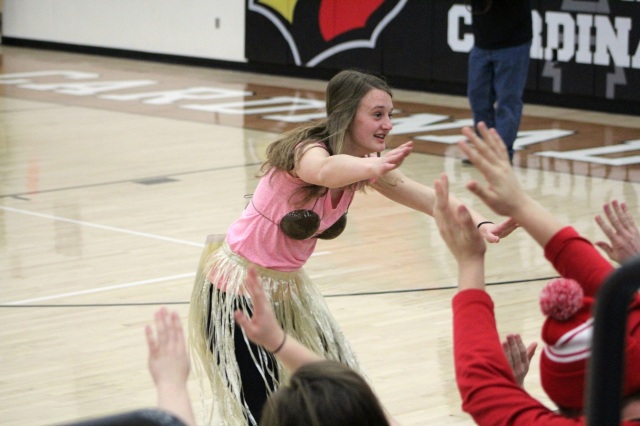 [Yeah, since it was at the beach, it was a longer ride than usual!]

[Macy and Kelby shepherd it up.] 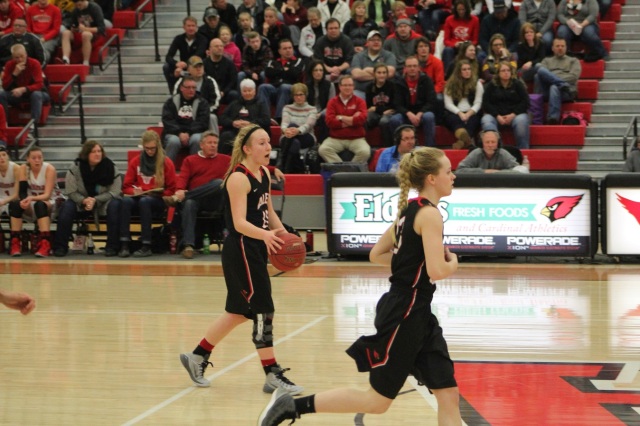 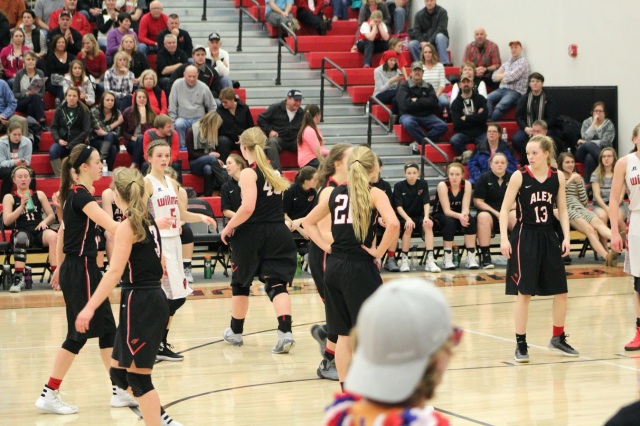 [Kiyana at the line again – a good sign that she’s being aggressive offensively.] 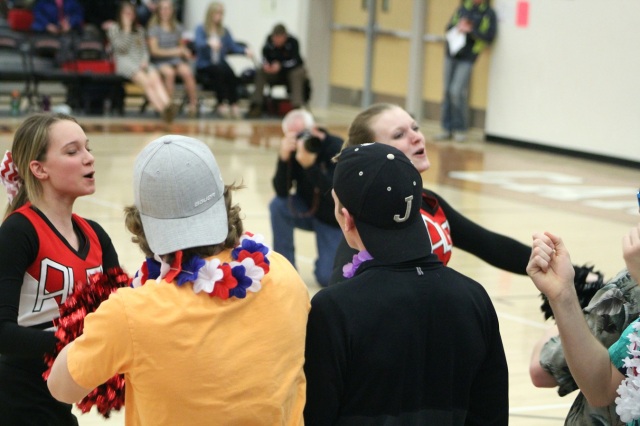 [Schmidty led off the 2nd half with her defense at the point.]

[A solid win spurred, as usual, by great defense.  It appears we will be the No. 1 seed for sections.]

[After years of idle speculation (OK, entirely in this blog), the truth finally comes out.] 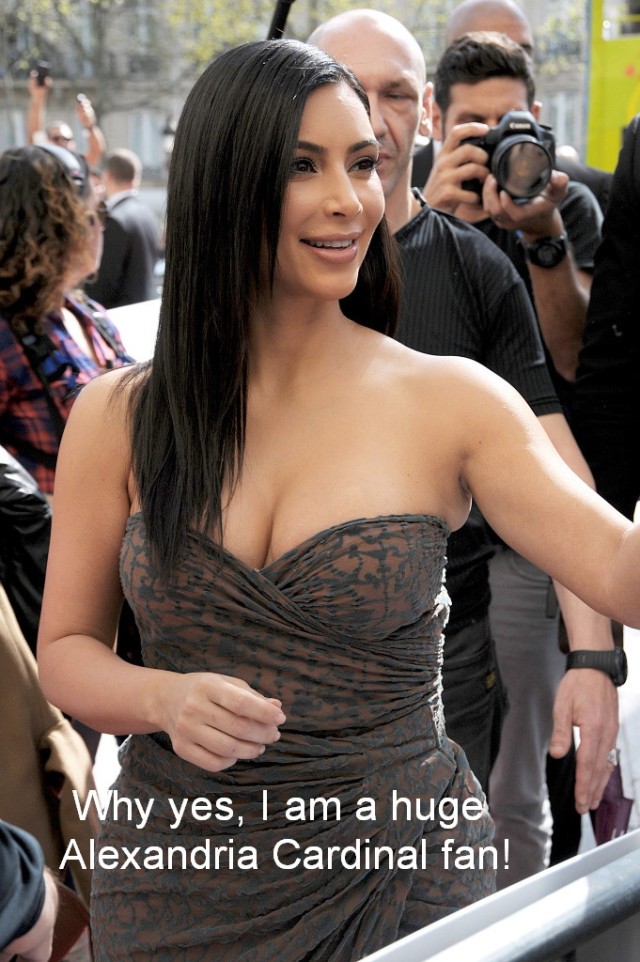 I never thought I’d lead the NBA in rebounding, but I got a lot of help from my team-mates – they did a lot of missing.  ~  Moses Malone

Up next:  More roundball