[Happy Valentine’s Day as the son-in-law shovels out “Smartie” this afternoon!]

Oh, and the next day was our anniversary and something called Valentine’s Day.

[I wanted to see the Sauk Centre girls and was only able to stay for the first half (they won) . . . ] 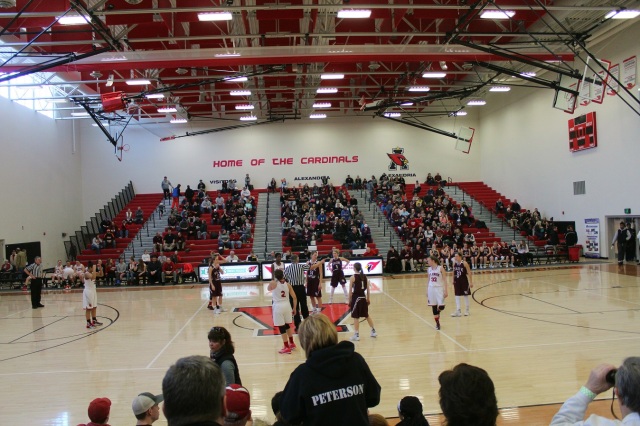 [Because then it was time to take my Valentine to the winery to see The Cheese Bots.] 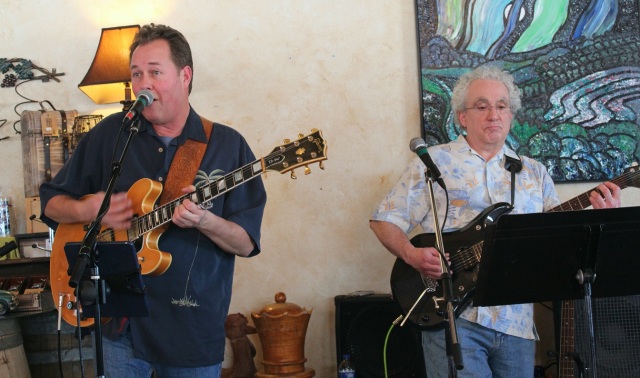 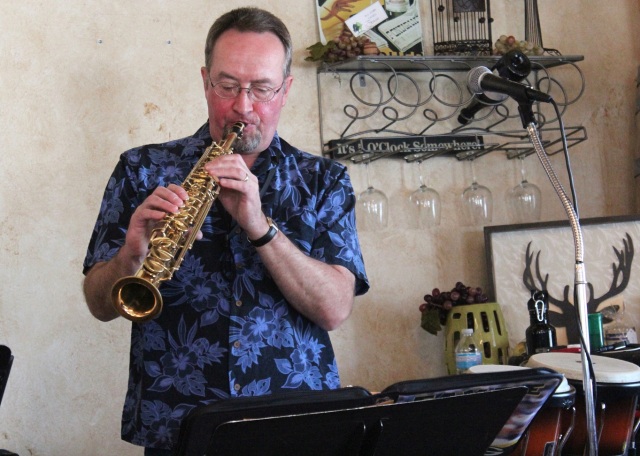 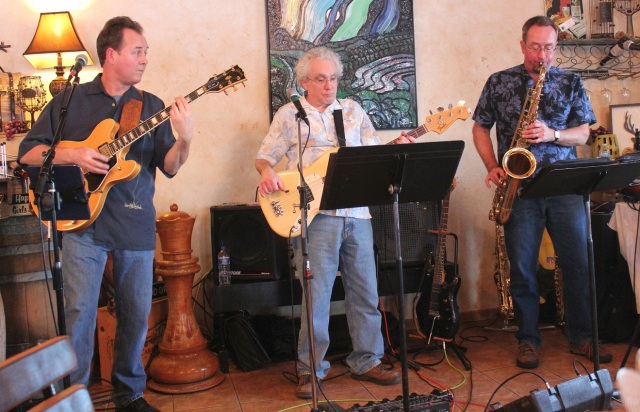 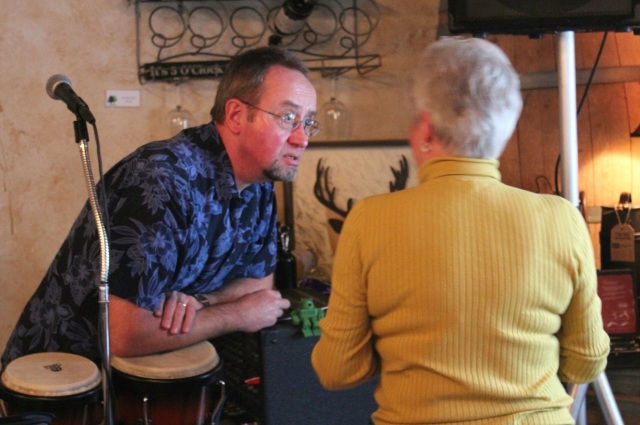 [FB:  Yo! Romeos of Alexandria! Are you aware this is Valentine’s Day weekend? Where were you today? Your favorite local winery was featuring wine, cheese, and chocolates in honor of the holiday. We were there for 3 hours, with throngs of people coming and going, to listen to The Cheese Bots, one of the great groups of the 21st century, and didn’t see a single person we knew? Say what?]

[And then before my mandatory appearance at SAWA that evening, I dashed off to AAHS to see the Cardinal girls’ game.  As many have often said, the Super has to be a saint . . . ] 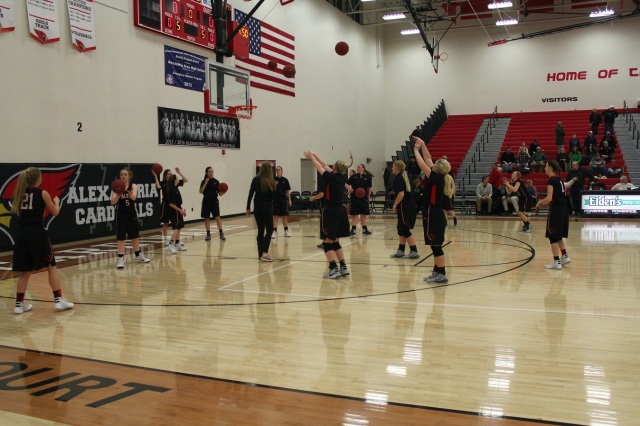 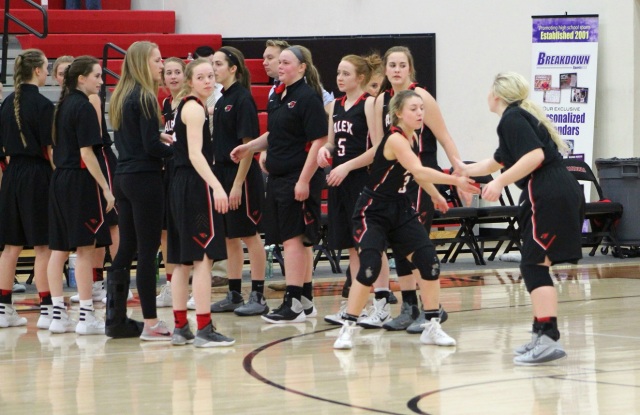 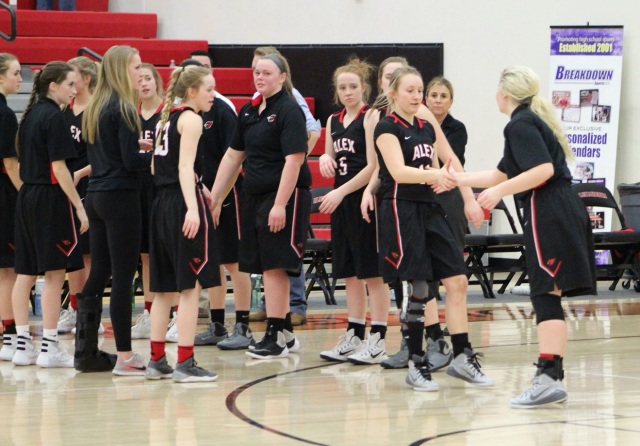 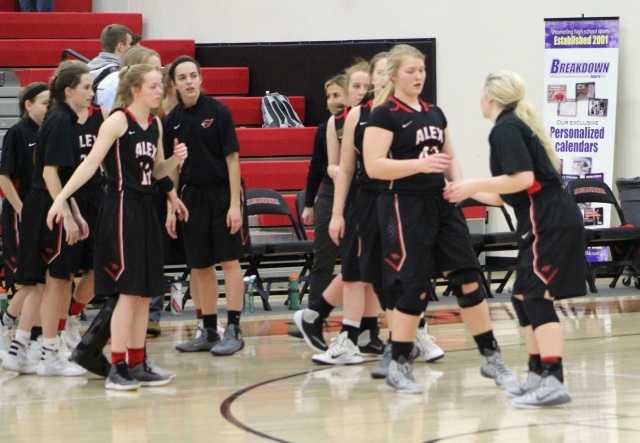 [I think Kayla’s laughing as if anyone thought she could win the tap – ha (see below)!] 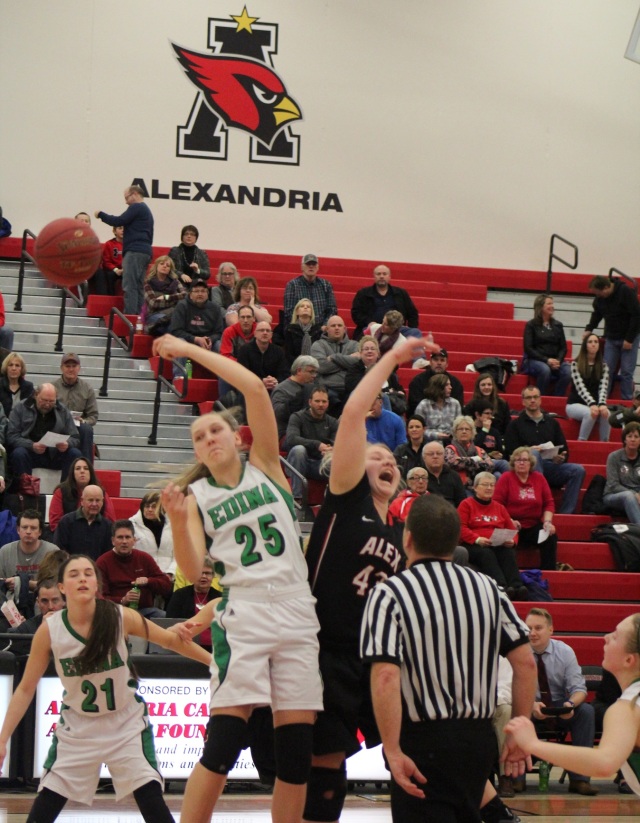 [FB:  I’m sure you’re all aware that size matters (well, of course you do, in various contexts). Our Cardinals hosted Edina, girls and boys. I had to laugh a bit watching both games – Edina was about a head taller, player for player, in each game. That’s the difference between a big Lake Conference school (where Hornets are at best average) with 1,000 kids per class v. our 300 kids per class. The Edina girls had a 6’5″ center, two 6’3″ players, and two other 6-footers . . . our tallest player is 5’11”. The Edina boys team had 8 players 6’3″ tall or taller. The girls were tied at their half, our boys had a slight lead. We lost both games – as an old sage once said, you can’t coach size and size doesn’t get tired. That’s our center, Kayla (43), standing behind their center.]

[A Hornet shooting over a flattened Macy.] 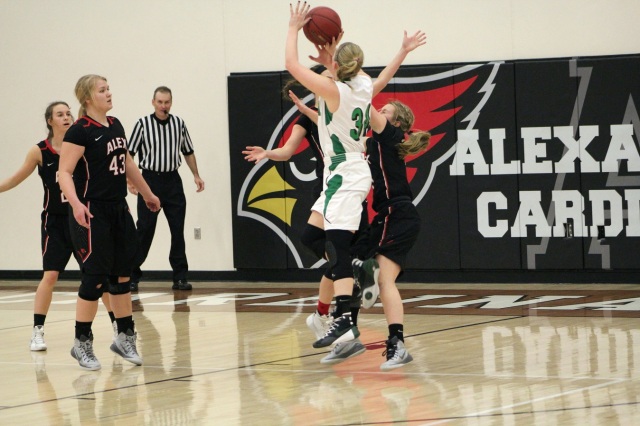 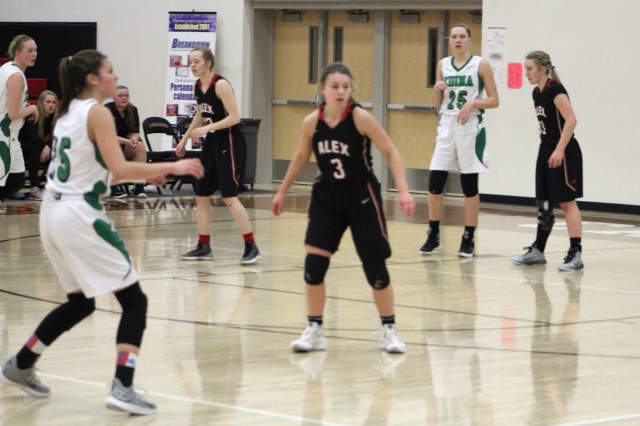 [Kendall goes up trying to deflect a pass.] 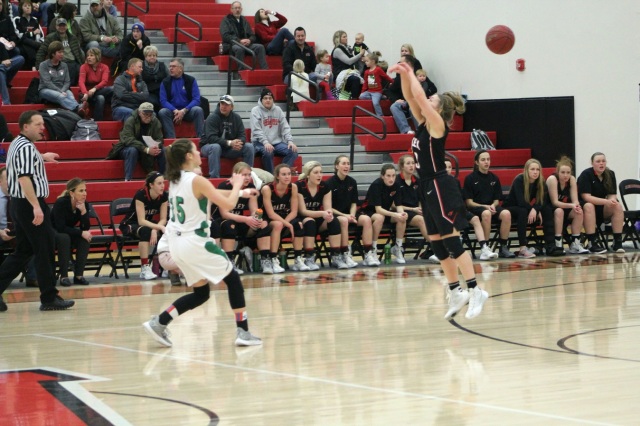 [The Hornets jumped to an early 9 – 2 lead, as I recall.  Being the bright boy that I am, I thought this doesn’t look good.  When their bigs got the ball inside, there was no way we could prevent them from scoring.  When we drove to their basket, they would just stand there flat-footed and swat away any of our shot attempts.  Until . . . Kiyana Miller (21), in the background behind Kendall, came in.  Kiyana drove in for some short pull up jumpers, before she got all the way to the bigs, and one time drove across the lane for a nice lefty scoop shot.] 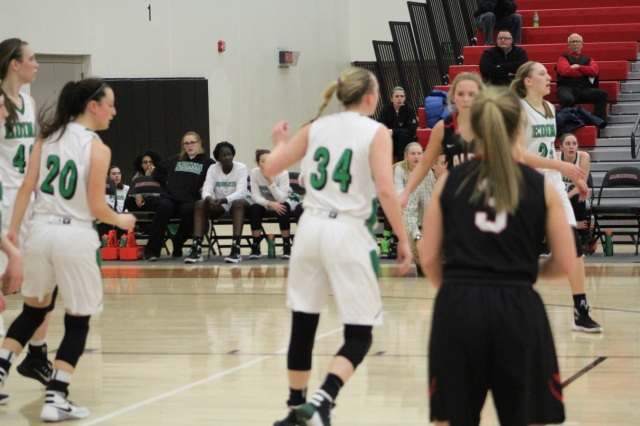 [Kendall inbounds, we started making some shots, started getting the to free throw line . . .]

[And met them defensively making it harder for them to get the ball inside.] 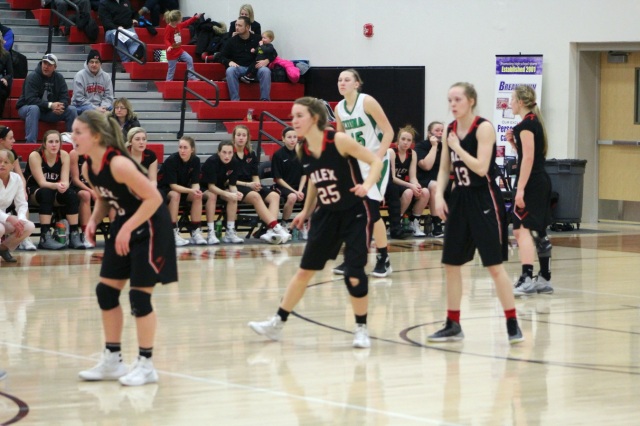 [I arrived just [about] on time for dinner and music by Paul Drinkwine, one of our favorites.] 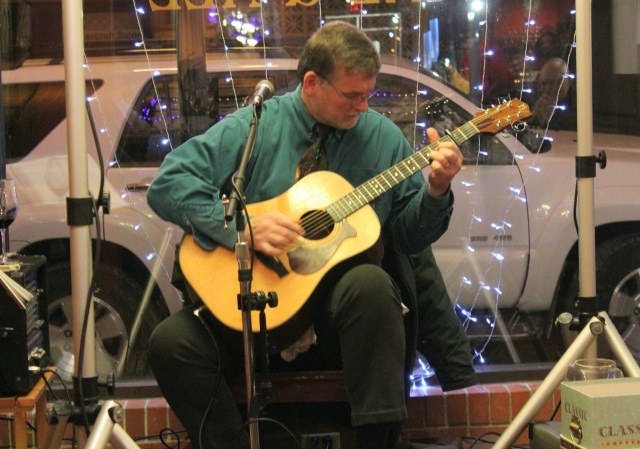 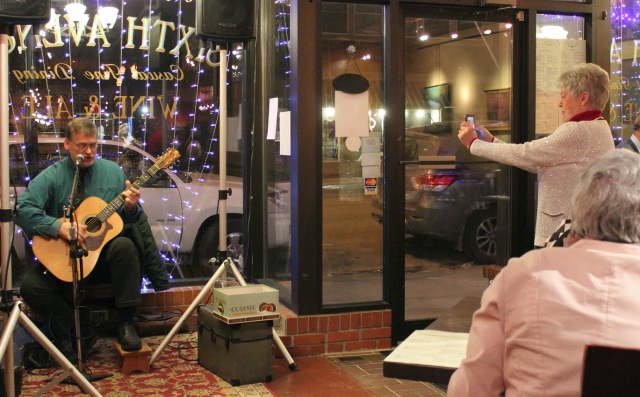 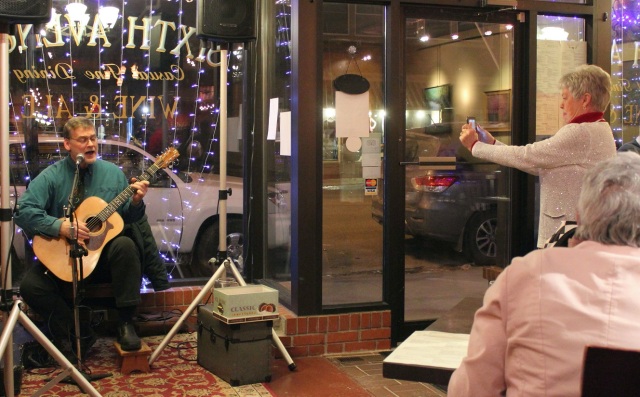 [I had to go back to AAHS to see how the boys were doing against the giant Hornets.  I arrived in time for the 2nd half – we had a 4 point lead.  But it was the teams 6th game in the last 11 days – wow!  We had absolutely nothing left as the Hornets raced undefended down court through the entire 2nd half.  For our girls, it was their 5th game in the last 8 days – the real meat grinder part of the schedule.] 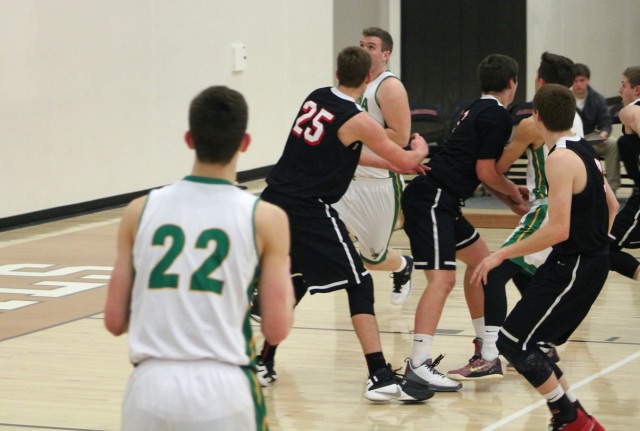 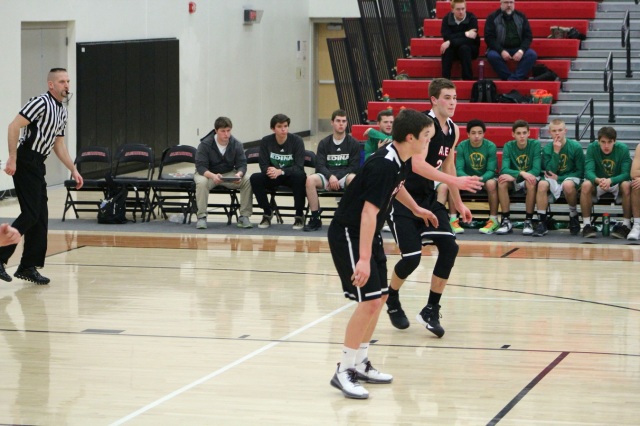 [Anders Nelson (4) for the Hornets is a sophomore guard who’s already getting looks from the next level.  He was the star of the game, particularly in the 2nd half.  Oh, and he’s the grandnephew of longtime Alexandria Super Fans, Gretchen and Don Nelson.]

[The lonely life of the point guard.  Jaran also had a good game.] 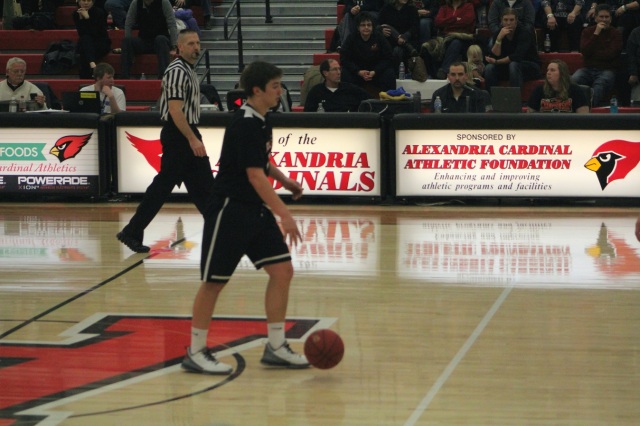 [The Hornets could even balance the ball on their heads?]

[It was a tough watch.  Then I had to blitz back to SAWA to close out the evening with the Super.]