On the day I received my diploma for completing the winter quarter of senior college with a perfect attendance record, our Cardinal boys’ basketball team were hosting the conference leading Fergus Falls Otters.

[Somewhere in this Cardinal fan section is the photographer who garnered a degree of international notoriety for taking the famous picture of the Fat Boys Walking Club.]

[Incoming Cardinal fans who ultimately decided the grass was greener on the other side of the court.] 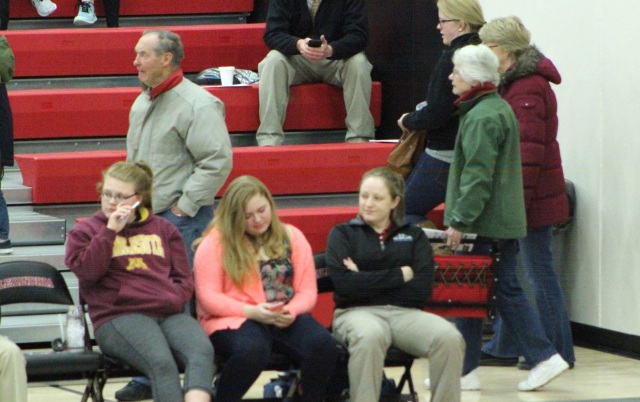 [This was first time I really got a chance to see more than a few minutes of the JV team. All sophomores, they impressed with their size and athletic abilities (back in my day (yeah, I know), sophomores weighed about 130, at most).  A lot of them looked like football players as they obviously have spent time in the weight room.  It appears we have numbers coming up in a lot of sports.] 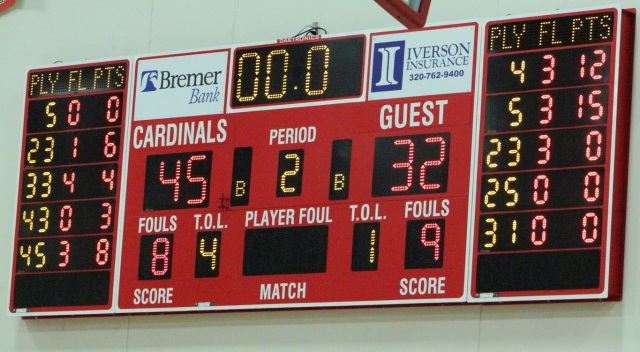 [The varsity pre-game huddle where players are advised to tuck in their jerseys.] 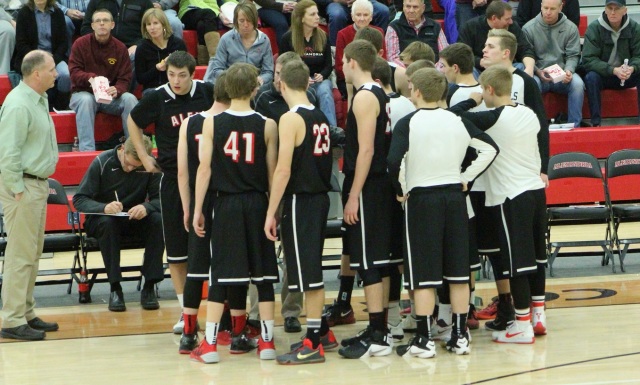 [The beginning of a “bad night” for me.  My photo of the opening tip was delayed by a fan walking through the line of fire.  It happens.]

[Then, I have no idea what this is?  I don’t remember taking it . . . or of the gym being cast into darkness?  But those are seniors Brayden Admundson (23) and Alec Wensman (25) heading up court.]

[OK, the gist of the game.  The Otters remind me a lot of the Little Falls team from two years ago.  They look like they’re from the 1950’s?  They are not physically imposing (the Cards much more so), not tall or athletic looking – all they do is play well together and make all their shots.  And, unfortunately, for us and the conference, they are a very young team.  By the time the night was over, the Otters still only had two losses in conference and are 17 – 2 overall.] 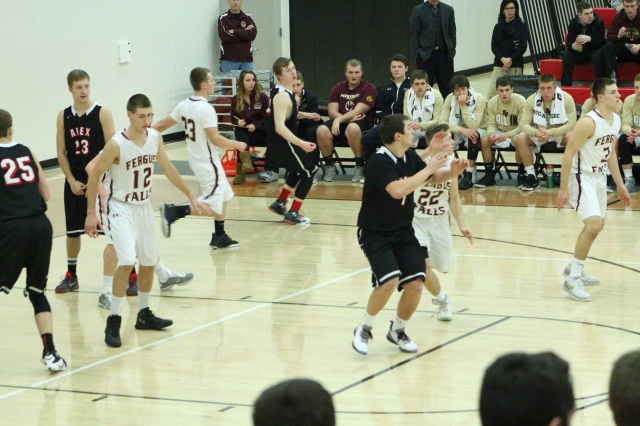 [As Alec shoots a free throw, note No. 11 for the Otters.  Not very big, looks the president of the chess club, but he scored 15 points in the first half, in traffic and out of traffic, over his head and behind his back, it seemed like no matter where he shot from, it’d go in.] 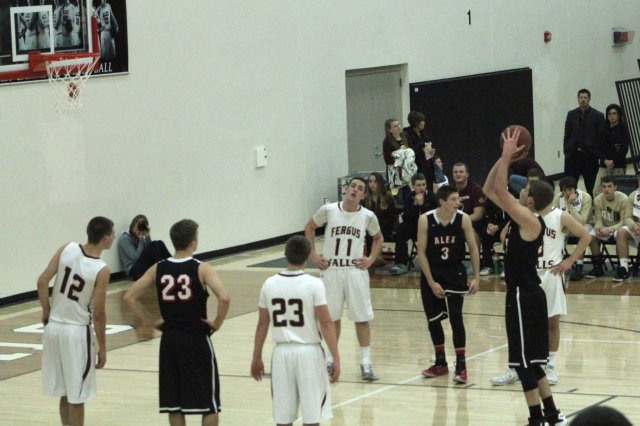 [Alec had a big first half (they couldn’t match up with him) and really controlled the boards – we had a big rebound advantage – but the Otters double-teamed him the whole 2nd half and we couldn’t get the ball into him.]

[Oh, more fans – and they’re newly in front of “our” photographer (who appears to have spotted me?).]

[The game was tied at 10.  Then the Otters made a run to up the lead to 10.  And that’s pretty much where it stayed the whole game.  The Cards had a very bad night shooting the ball – missing bunnies, getting the offensive rebound, and missing again, and never made a ‘3’ the entire game, though there must have been double digit attempts.]

[Alec again, I think was his only point in the 2nd half.  The Otters made 18 of 23 free throws (3 misses came late when the outcome was not longer in doubt); the Cards made 7 free throws. They could double-team Alec in the post because we weren’t making any shots from the outside.]

[It’s a live ball!  We played well and could have won this game with decent shooting.  But that’s why they call it “basketball” – you have to put the ball in the basket!] 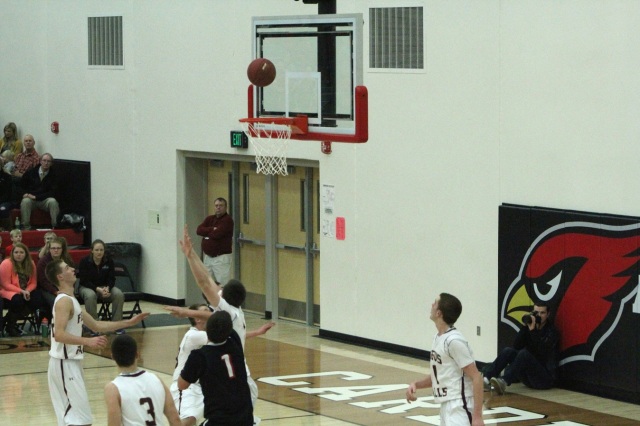 [The Otters also run well, so you’d better hustle back on defense.] 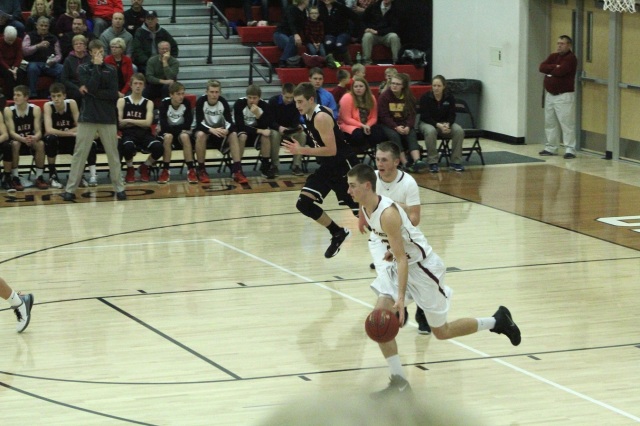 [Spencer Hockert (15) was shut down in the first half, but as the game was wearing down, he and Jaran Roste continually took the ball to the hoop, and through a variety of spin moves, got the shots up and finally starting to drop.  But then we had to foul at the other end, and the Otters made their free throws.]

[Roste finished with 20, Hockert 14, and Wensman 11.  Jake Drew (33) provided a real team spark with his defense and rebounding.] 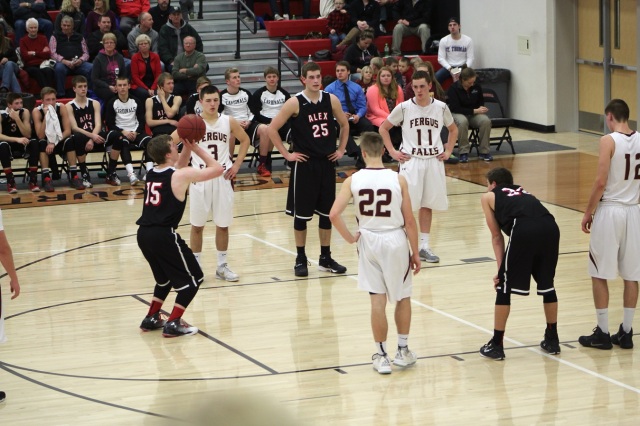 [It could be interesting if we meet them in sections.]

[And another learning experience . . . ]

The secret is to have eight great players and four others who will cheer like crazy.  ~
Jerry Tarkanian