Boys Play Sports Too? Who Knew?

Our Cardinals were coming in on a mini-hot streak.  But the opponent was the St. Cloud Apollo Eagles, the defending section champ and undefeated in the conference so far this year.  This was the Cards chance for a statement win at home and for section ranking points . . .

[When I (the Super still battling a cold) arrived the first period of the JV game had just ended.  Our Cards were behind 4 -1 and were being outshot 15 – 1?  So, I thought, what the . . . .?  Then I learned that Apollo had basically played their varsity in the first period – because they don’t have enough players for a separate JV team.  This is a trend that seems to happening in a lot of places – so far our numbers for both boys and girls still remain good in Alex.  Therefore, as good as Apollo has been in boys hockey, next year they will combine with Tech to form one public school team in St. Cloud (Cathedral will still be separate).  Anyway, with fewer varsity players available for the Eagles in the 2nd period (only two periods were played), the Cards made a nice comeback and actually had a couple of really good chances to tie.]

[And a multi-player pile up in the goal – no injuries were reported or tickets issued.]

[Players still trying to unscramble as the goalie gathers his wits.]

[Wade Smith (25), junior defense, tries to keep the puck in the zone.]

[Jack Steffl (2), senior forward, in with Strong and Smith.]

[Same guys, must have been having a good shift.]

[Up until one minute left in the first period, it had been a great game.  Both teams were skating well, fast paced, each team with just three shots on goal.  And then the Cards blew all their gaskets.  A 5-minute major penalty, the Eagles scored before the period ended and carried over another 4 1/2 minutes of power play in the 2nd period.]

[Cards of the future starred between periods.]

[The Cards got another 5-minute major in the 2nd, plus a minor.  It seemed like we played the whole period short handed.]

[We were down 4 – 0 after two periods and probably did pretty well to be that “close.” The Eagles had 3 power play goals.  The Cards were spent from all the penalty killing.  The game was over for me and several other fans who had seen enough of the Eagles on the power play.  The final was 4 – 0.]

Our Card boys basketball team had also been playing well lately, winning 7 of our last 8.  But we were hosting the Rocori Spartans, a team that took us to the woodshed to the tune of 57 – 32 in their first meeting.

[We (the Super was better) arrived in time for the finish of the JV and 9th grade games.  We won both.  Yay.  But we had to wait for the games to end before they rolled out our usual West side bleachers.] 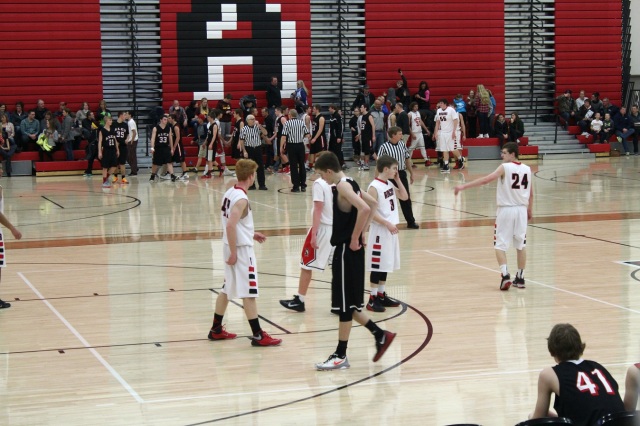 [It was there we first noticed that girl basketball and hockey players (and maybe others?) we there to cheer on the Cards in their . . . jammies!  Cyndi Lauper was right! 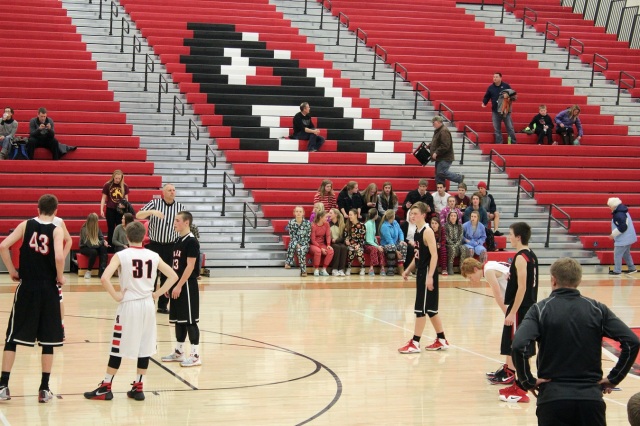 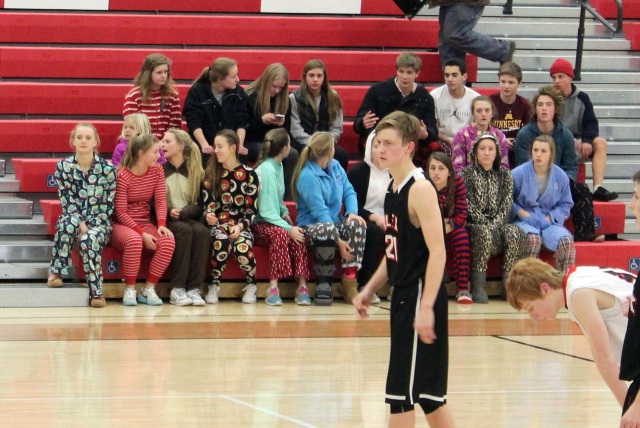 [The JV game was close, the Cards had to make free throws down the stretch – and we did, here freshman guard Cody Kutz (13).] 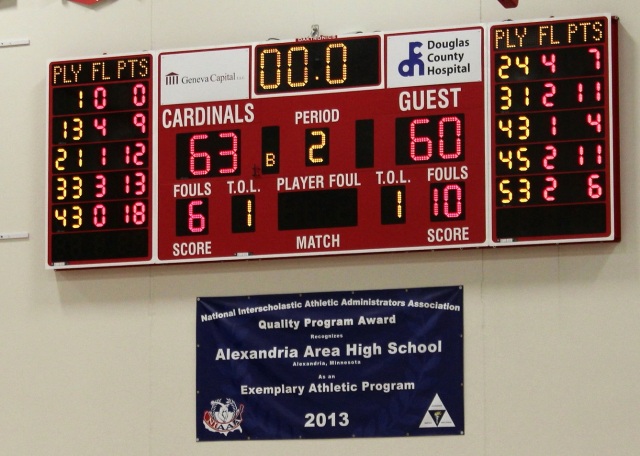 [Big enough game to a attract a band!]

[Roundballer Kiyana Miller is spotted in some sort of rodent attire?] 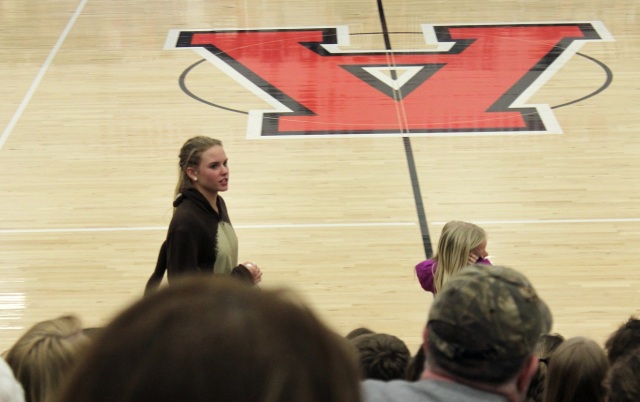 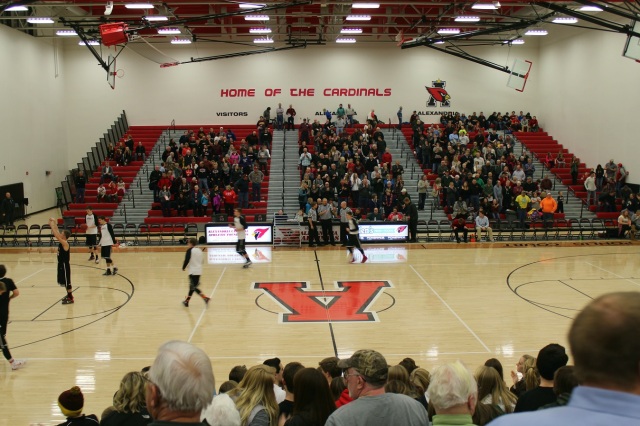 [A quick scan of all the school banners, placed in such a manner to intimidate the opposition.] 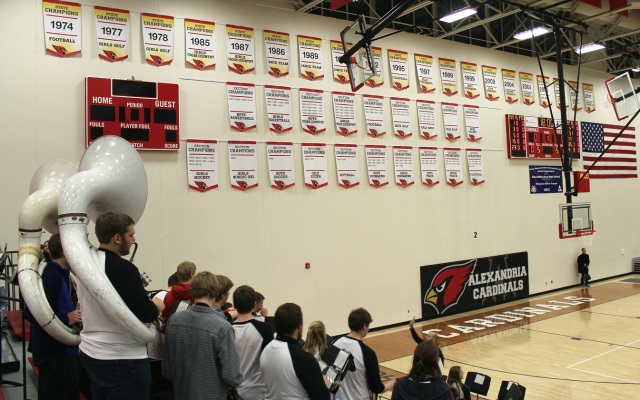 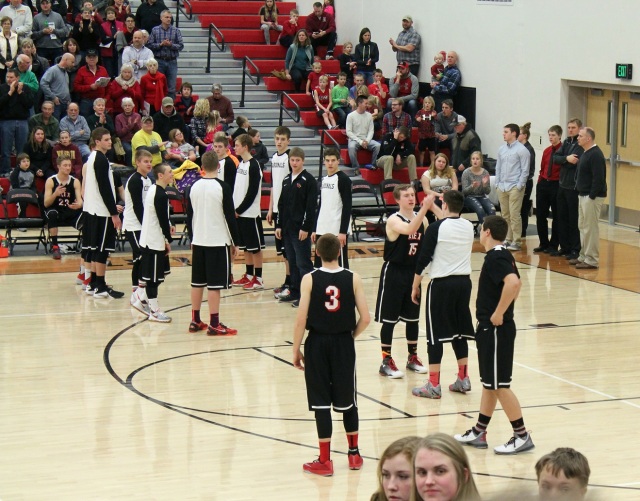 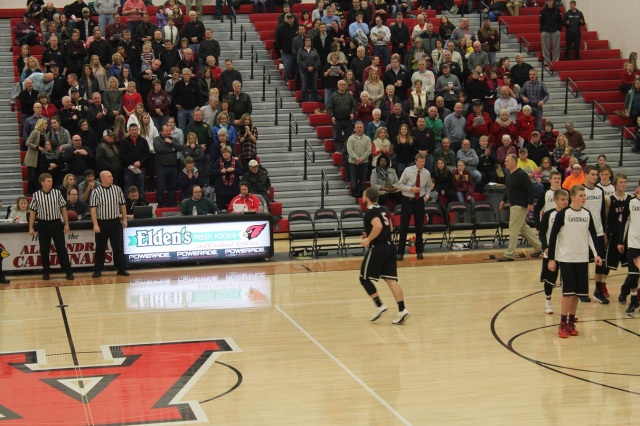 [Halftime already, and no pix?  Little did we realize when the students moved in in front of us that they would stand the whole game.  As old people, who go to games like we’re going on a camping trip, we didn’t feel like moving all our equipment to the upper tiers. We watched between the shoulders.  Anyway, the Cards had a great half – an attacking offense and tough defense.]

[Now to the game with serious “stuff” on the line . . . make a midcourt shot, win a pizza slice!  Up first, Cardinal center Kayla Feldhake, jammies and all!] 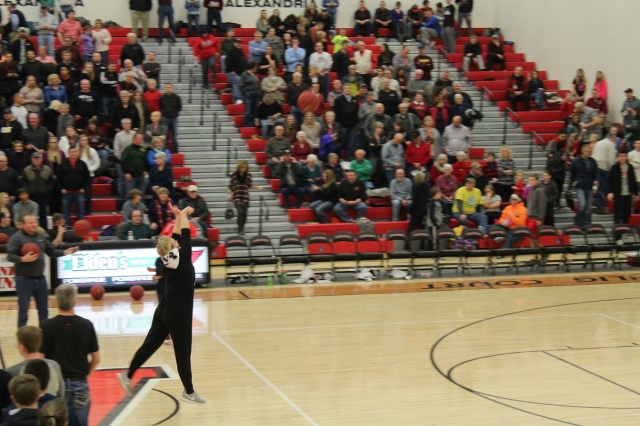 [Then designated 3-point shooter Kara Thomson . . . both she and Kayla were close, off the glass, off the rim.]

[Oh, oh, the starting guards are in line – Macy Hatlestad in the leopard print hoodie, and Kendall Kohler and the red and white stripes . . . ]

[And then someone, whom I didn’t recognize, also in red and white stripes was the only shooter to make a shot  – likely a hockey player then?]

[Then Kendall, also a rim shot.} 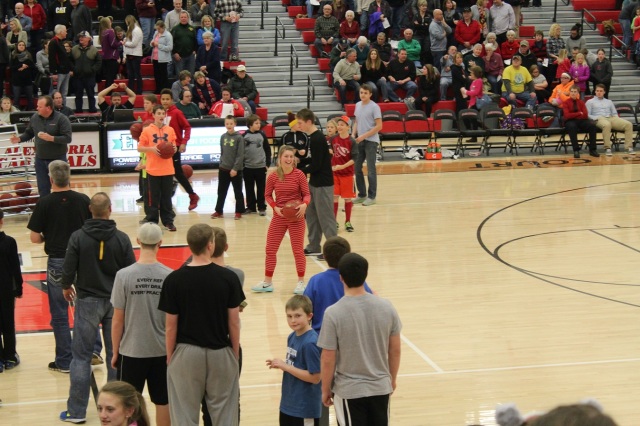 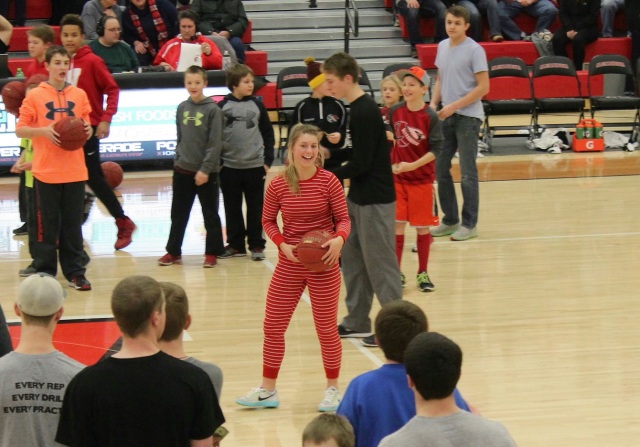 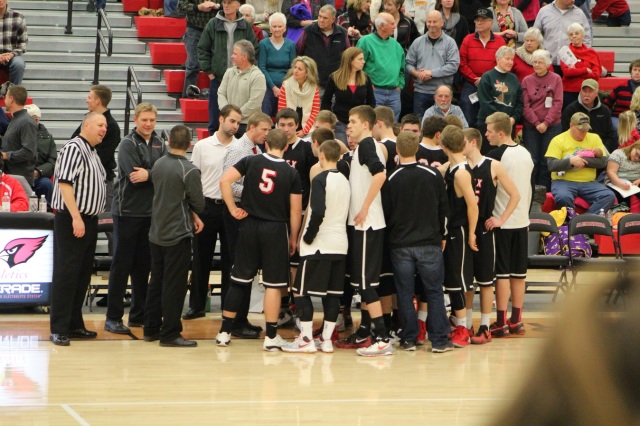 [Roste on D, but he also had a terrific offensive game as the leading scorer with 25.] 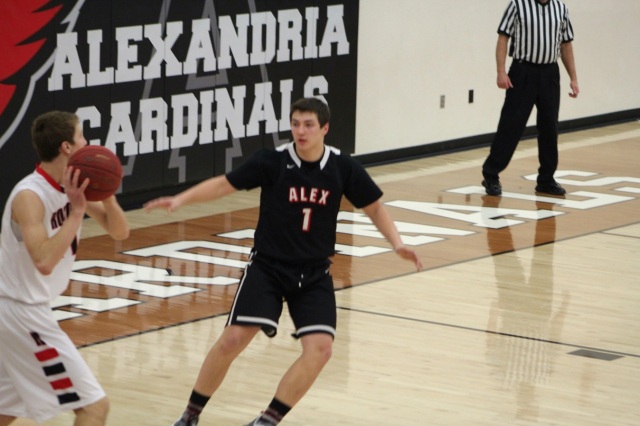 [Jeremiah and Brayden join the pinch – we had a pretty good look around the students at our defensive end.]

[Ooops, then someone got in the way.] 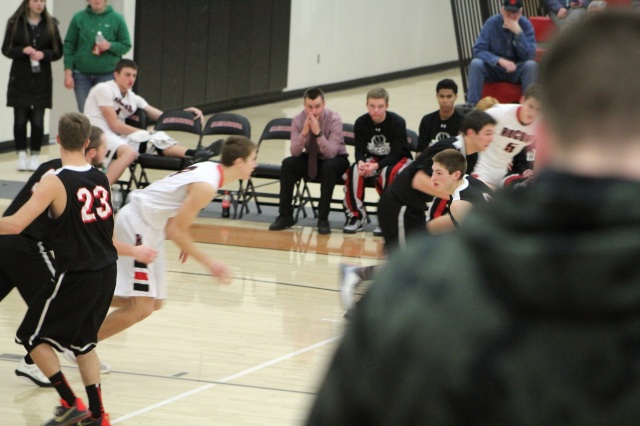 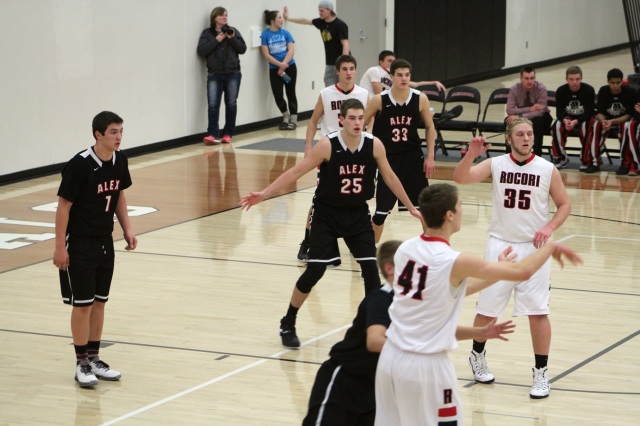 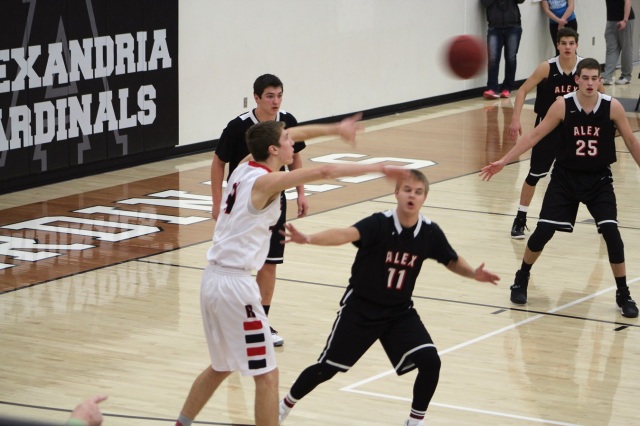 [Meanwhile, Amy Jost takes over the student cheering section and takes them on a roller coaster ride!]

[The game got a little tense at the end.  As often happens, the Cards played the 2nd half not to lose.  We lost our aggressiveness on offense and fell out of sync.  The shots stopped falling (I think we only made a couple of 3’s the whole game), and the Spartans, in catch up mode, starting shooting early in each possession and either making them or getting the offensive rebounds and scoring on their 2nd or 3rd attempts.  They closed to within one with about three minutes left, but the Cards scored six points in the next 30 seconds to hold on for the big win.  I believe we’re tied for 3rd in the conference now.] 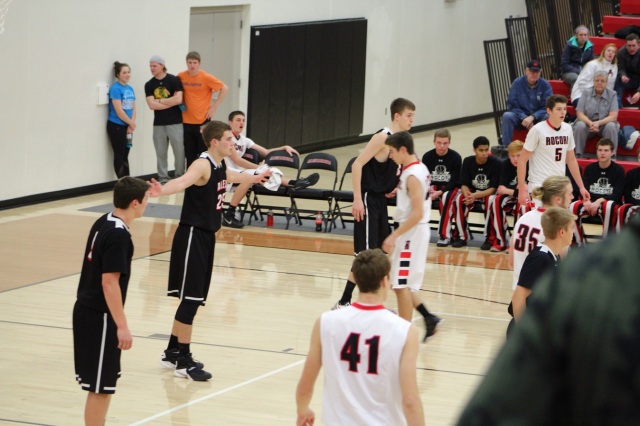 [We have Fergus at home next Thursday.  They’re in 1st place in the conference and beat us by 18 at their place.]

We’re going to turn this team around 360 degrees.  ~  Jason Kidd