A Great Start to a Season of High Expectation

. . . And Bethany and Megan Hasz finish 1 – 2 again at the state cross country meet!

Alexandria junior McKenzie Revering (left) and senior Lauren Niska wear their University of Minnesota-Duluth gear on the ice at the Runestone Community Center on October 15. Both players recently gave verbal commitments to play their college hockey for the Bulldogs.

[And with these two leading the way, our Cardinals opened the 2015-16 season on Saturday against the North Metro Stars hoping to improve on last year’s state consolation championship (Echo photo).] 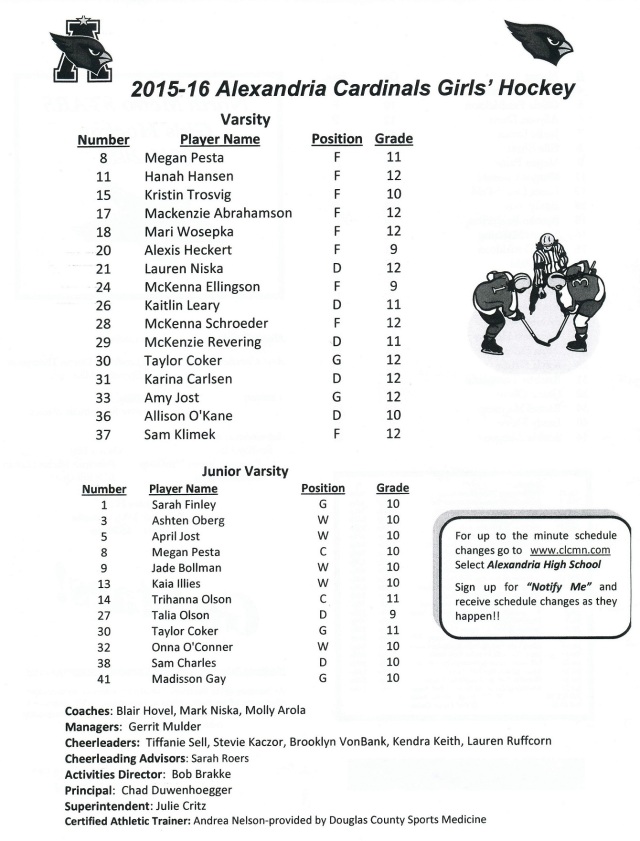 [This is an experienced team, with even the frosh and sophomores already having varsity experience. But we did notice . . . well, it looks like the JV roster is from last year?  We know Onna O’Connor has decided to hang up her skates after a couple of knee surgeries, and there were a few players on both rosters who are not listed at all?  North Metro has been a regular team on our schedule for the last few years, composed of players from Fridley, Osseo, Park Center, but even a Star fan sitting in front of us couldn’t name what other schools are involved?  We have  schedule full of Class AA teams which should prepare us well for tournament time.]

[Always nice to warm up for the varsity game with a nice win by the JV!]

[As the “Super Fans” wandered in, we watched our defense warm up – Karina Carlsen (31), senior; Allison O’Kane (36), sophomore; and Kaitlin Leary (26), junior.  “Weakie” and Vivian made their first appearance at the RCC in two years, Professor Shaughnessy will make as many appearances as he can before he snowbirds to Arizona, and, of course, Roger was there to sing the Anthem.] 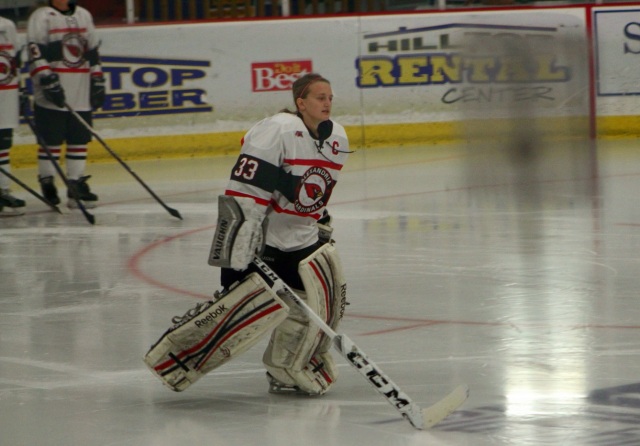 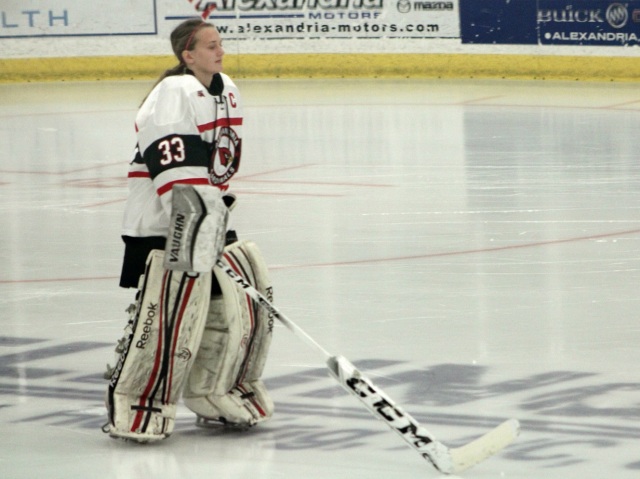 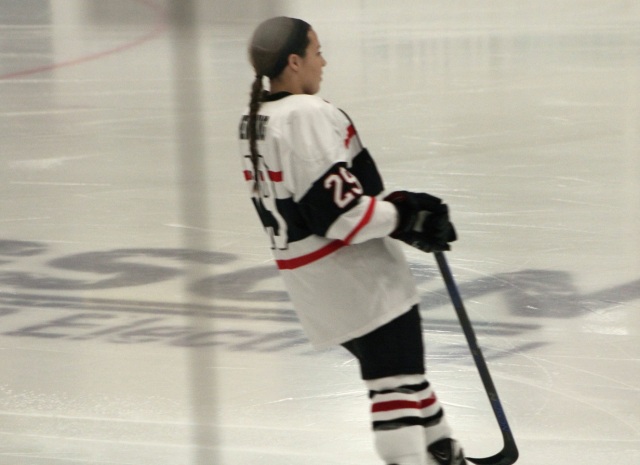 [McKenzie Revering (29), junior defense; and opposing teams look out there and think, “Haven’t those three been playing together for about 10 years now?”] 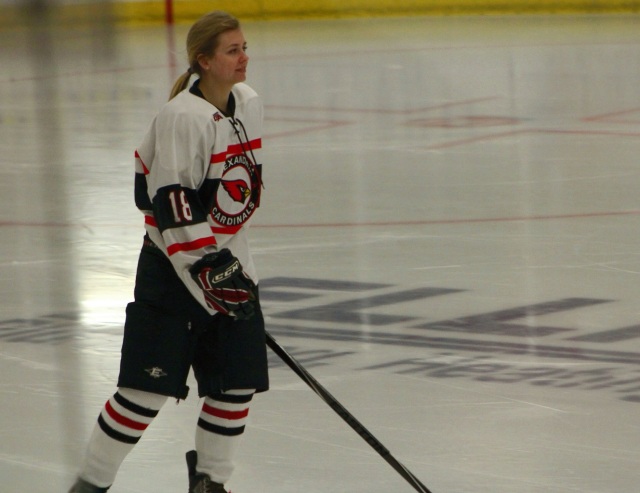 [Mari Wosepka (18), senior forward, and sings the Anthem in the absence of Roger.] 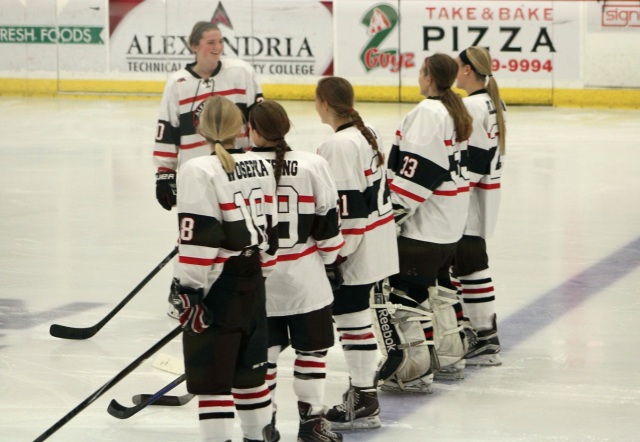 [Alexis Heckert (20), freshman forward; so with all this experience, still two freshman on the forward line.] 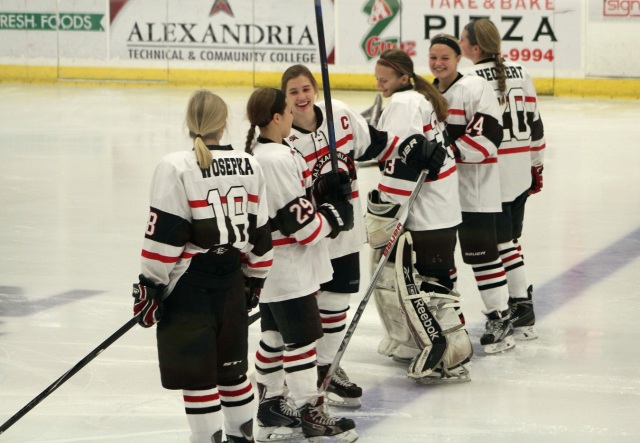 [DMac and Bob Cunniff man the KXRA radio both.] 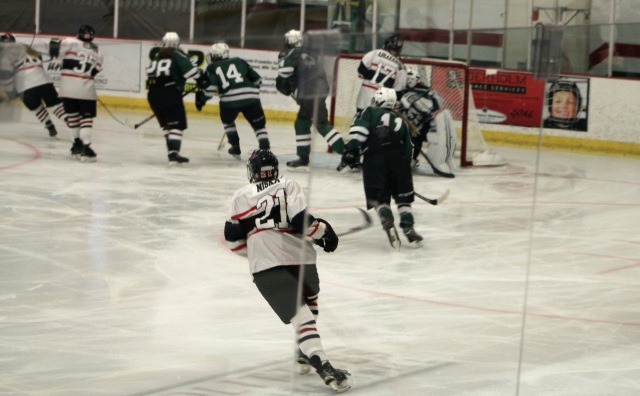 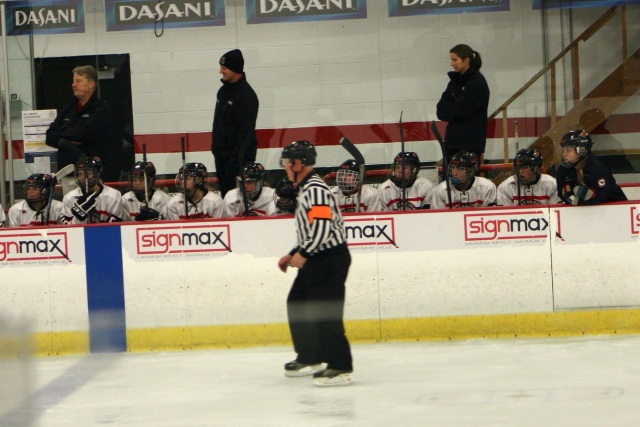 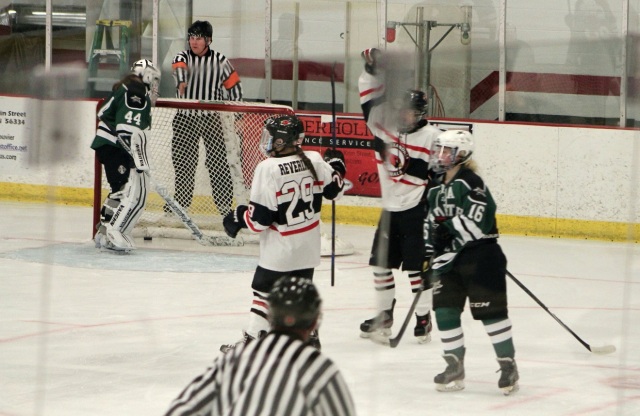 [Ref says, “That’s a gooooaaaalllllll!”  First of the year, Mari, short-handed, from McKenna.] 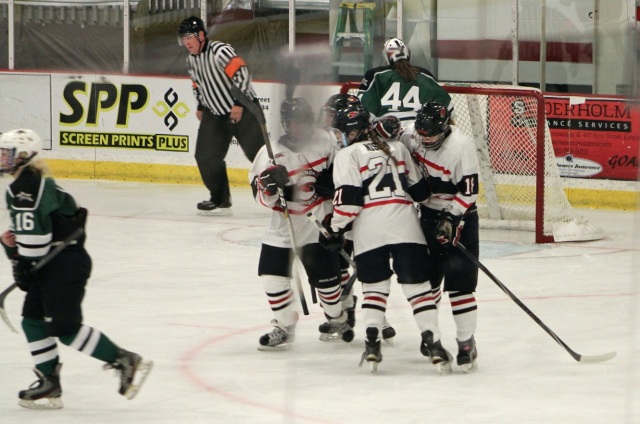 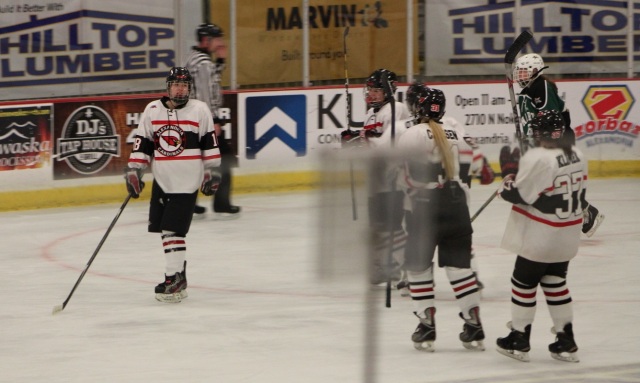 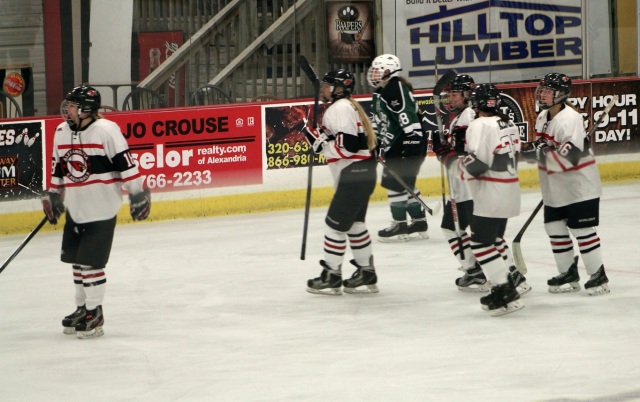 [Then returning the favor, McKenna scored from Mari.] 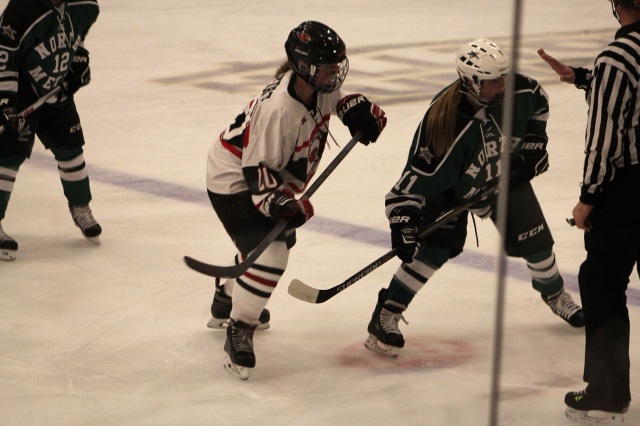 [Alexis trying to interpret hand signals from the ref.] 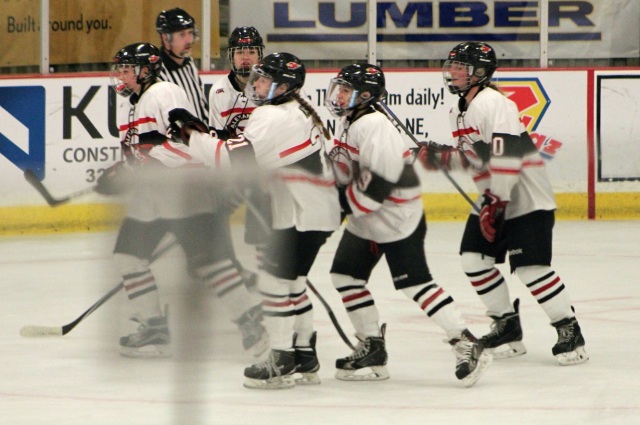 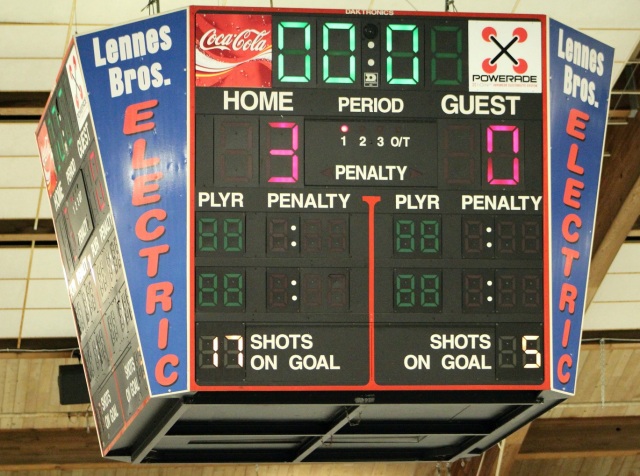 [Alexis shadows (it was a sunny afternoon game).]

[Hanah Hansen (11), senior forward and last year’s leading scorer, on the left in civvies will be available for the 3rd game of the season.]

[Karina on the offensive.  All our defenseman are offensively minded, so we do get caught by odd man rushes.  Considered a price worth paying with Amy in the net.] 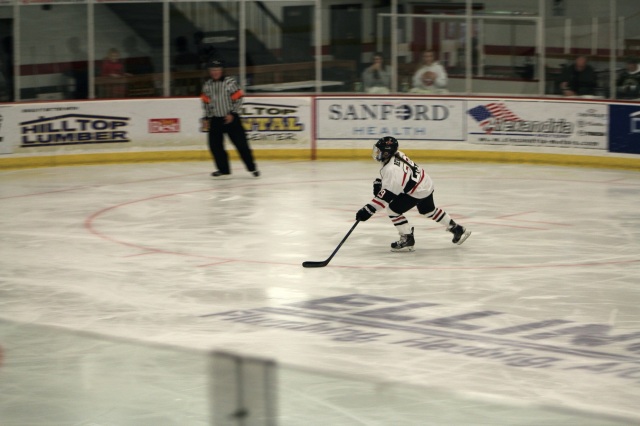 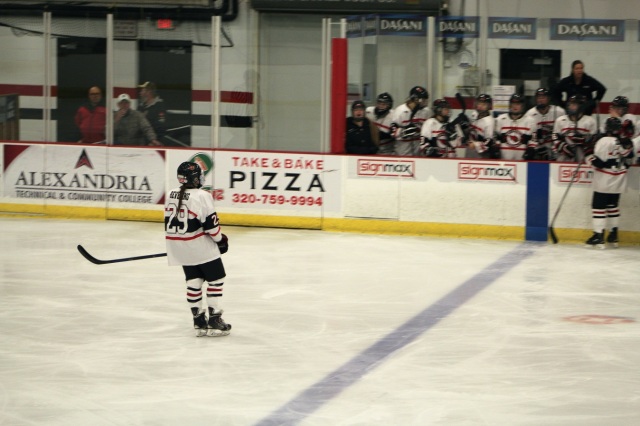 [A rarity of rarities.  Little Rev got a penalty shot.  We couldn’t tell what caused it – there was a big scrum in front of the Stars net when all of a sudden a Star player was jettisoned out of the pile like a jack-in-the-box.  We assumed it would be a penalty on the Cards?  But Rev got the shot and executed it perfectly – we were up 4 – 0.] 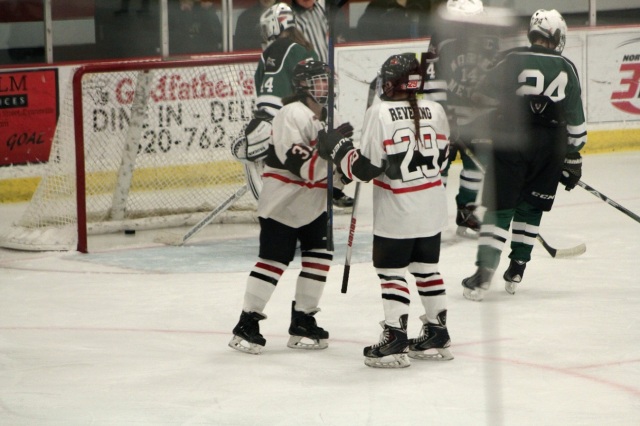 [And soon Sam Klimek (37), senior forward, is thanking Rev for an assist on her goal.] 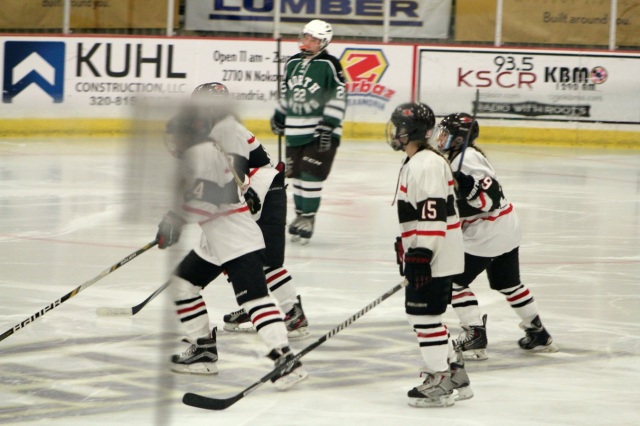 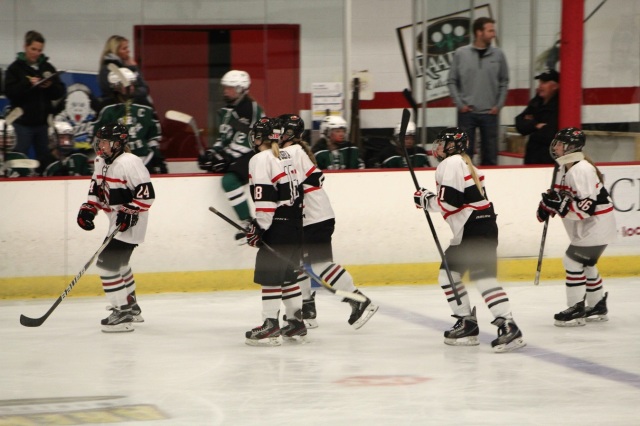 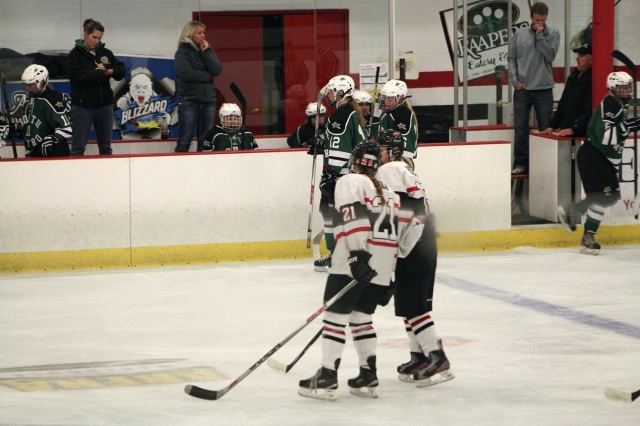 [The Stars scored early in the 3rd to close the score to 5 – 2 (the Stars had two senior forwards who were quite good).  That only riled the Cards who scored the final 4 goals of the game, and all I could do was capture all the aftermaths: McKenna from McKenzie and Kristin Trosvig (15), sophomore forward; Mari from McKenna and Alexis; Kristin from Lauren; and Lauren from Mari and Alexis.] 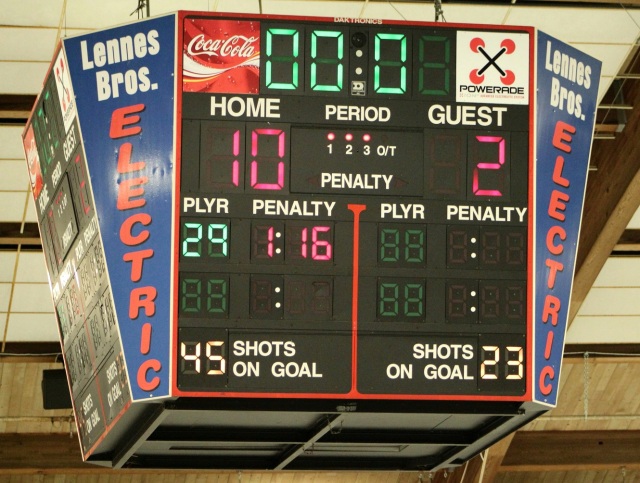 [Earlier in the day, the girls cross country team finished 9th (out of 16 teams) in the state meet at St. Olaf.  Bethany and Megan finished 1 – 2, the third year in a row in some combination they finished such (Echo photos).]

We celebrated all the day’s wins a tad later that day at SAWA . . . 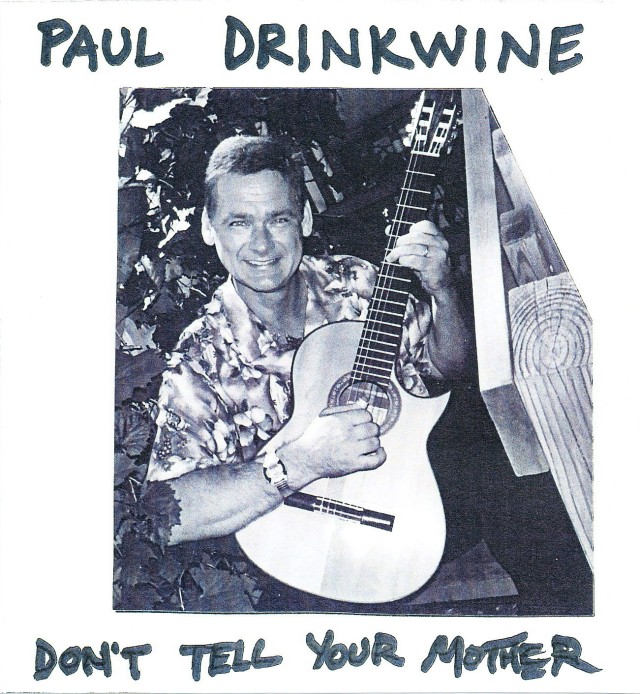 [You will no doubt recognize Mr. Drinkwine as an original member of Harper’s Chord.  This was his first solo locally.] 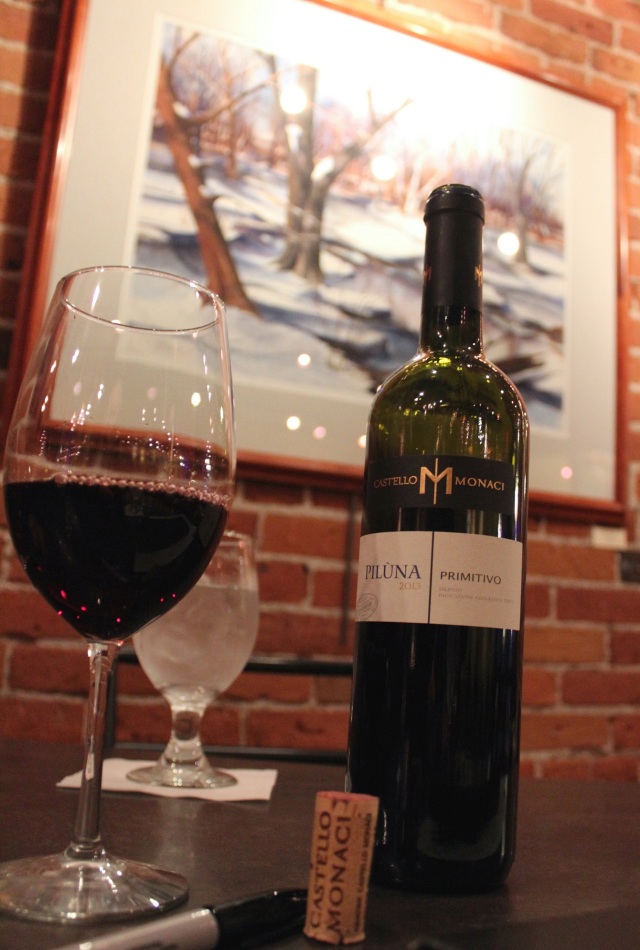 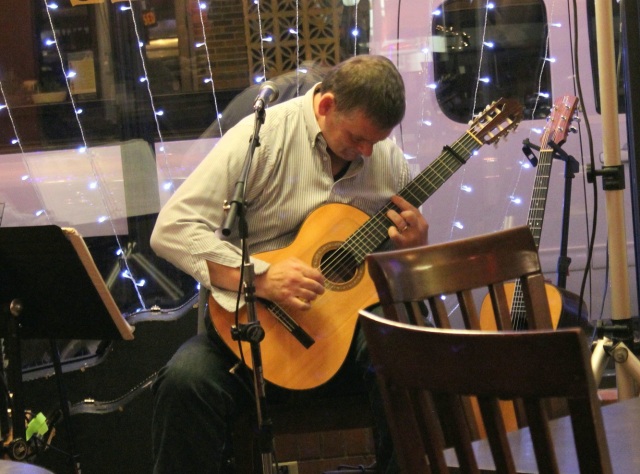 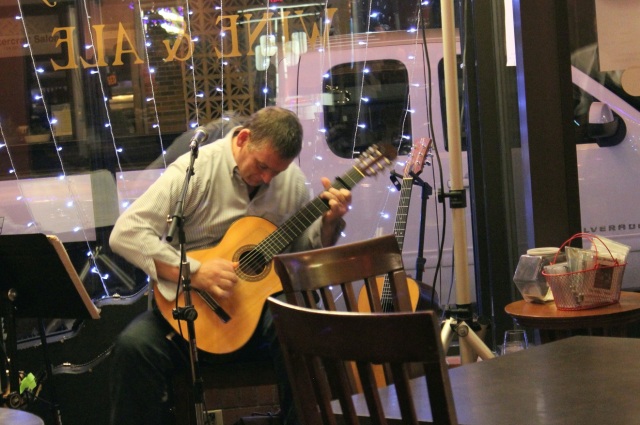 [Why yes it was a lovely Piluna Primitivo zinfandel with a delicious Jewett Benson landscape on the wall behind.]

[Unfortunately, the video was out of focus in auto-focus mode?  But music is all about the audio anyway . . . right?] 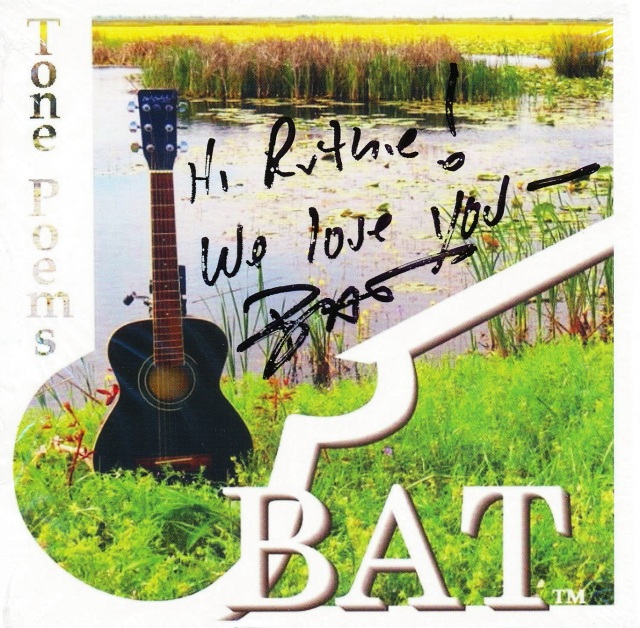 [The Super was really excited about this recent “present.”  🙂 ]

Street hockey is great for kids. It’s energetic, competitive, and skillful. And best of all it keeps them off the street.  ~ Author Unknown

Up next:  Are we going to Hawaii yet?