[Margaret and Jerry . . . still mom & dad to all of us!  But it’s nice when they also bring along Mary and Ellen, their own progeny.]

[I did not go home after the football game . . . I might have felt the urge to change my attire.  I figure the Super can dress for both of us.  Would you believe my entire wardrobe is over 20 years old (The Nanner is disqualified from this event because of proprietary disinterest)?] 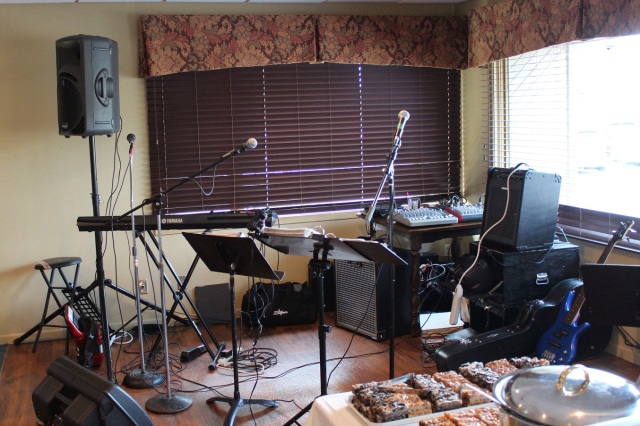 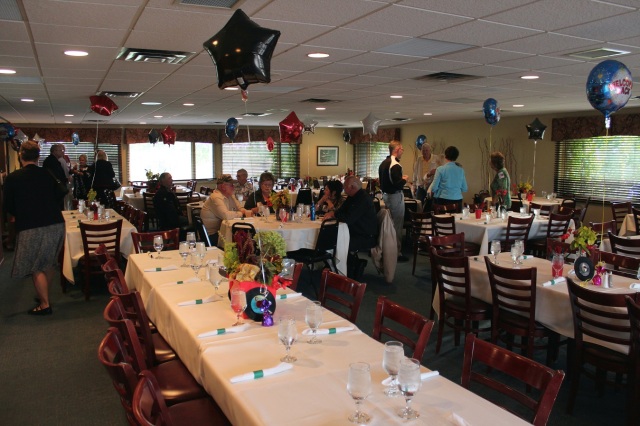 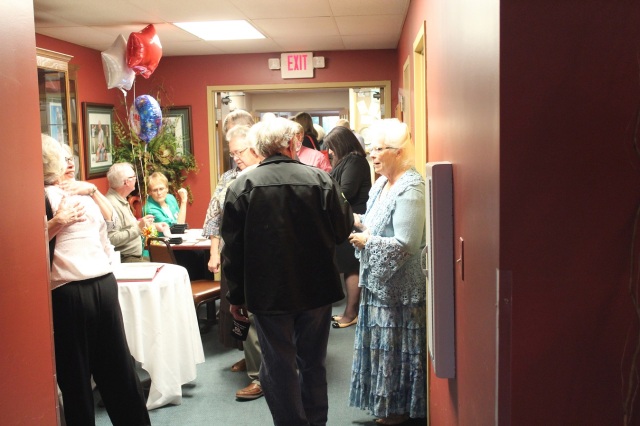 [The sign-in and hugging vestibule.  I do not believe hugging was permitted when we were in high school?] 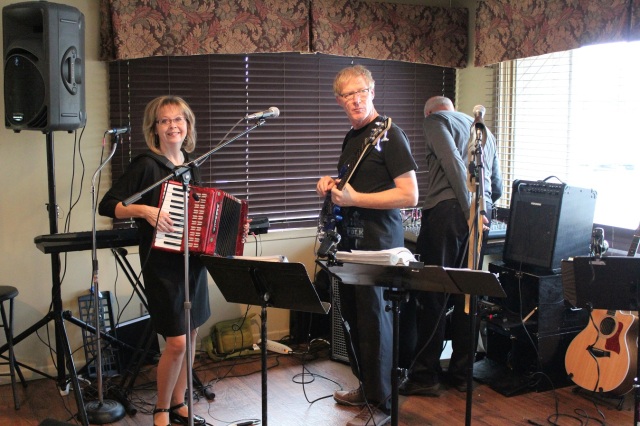 I’m going to go with maiden names throughout because the yearbook didn’t know what their married names would be? 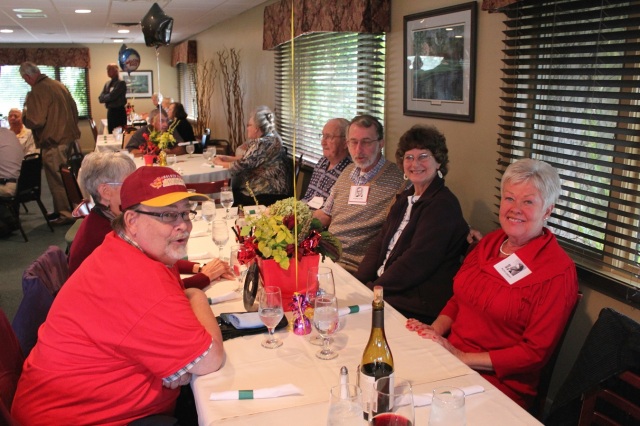 [Tom Ellis and Dave Serie are pondering the qualifications of their photographer.]

[Robin Kochie, Mike Gillespie, and Kathy Josephs all appear to be on their high school playing weights.  Disgusting!  Ruth Helie, my fellow volleyball and basketball fan, sneaks in from the right.]

[Ted Ording got Marilyn Olson’s purse more than once, Kathy Sherry’s several times, and Serie’s was off charts.]

[Kathy, please!  Rodney Dangerfield was wrong – you would not have looked better before electricity.]

[Jane Johnson and Louie Ley . . . doesn’t get much better than lookin’ good!]

[Older homo sapiens gather to plug the gaps in their collective memories.  I believe the main players are John Kloehn, Paul Nokes, and Russ Bey.]

[Spouses from another class, perchance?]

[Judy Seppanen and Barb Kloehn share fond memories of chalk dust and other such educational materials.]

[Barb Kloehn prepares for her “State of the Class” Address.] 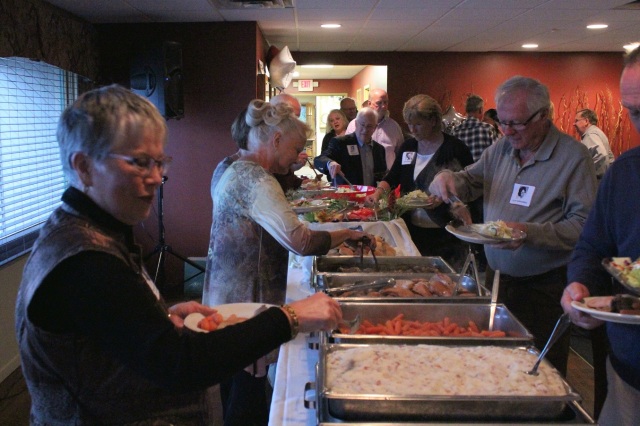 [The reunion ramrod, Bev Roers!  Thanks again, Bev.  If you could find all but 4 classmates, I’m recommending you for such a position with the FBI – you can get training right here at the ATCC!]

[Mike Gillespie, one in a series of great Cardinal golfers.]

[Help, I need somebody?]

[Joe Drexler and . . . Joe Drexler (on the name tag?).  Joe had previously walked the parade with me twice, making him the leader in the clubhouse.] 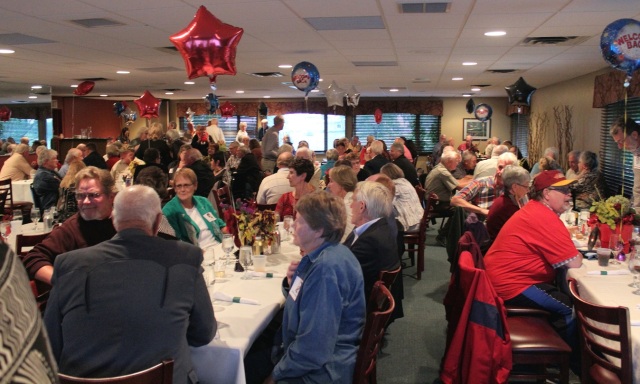 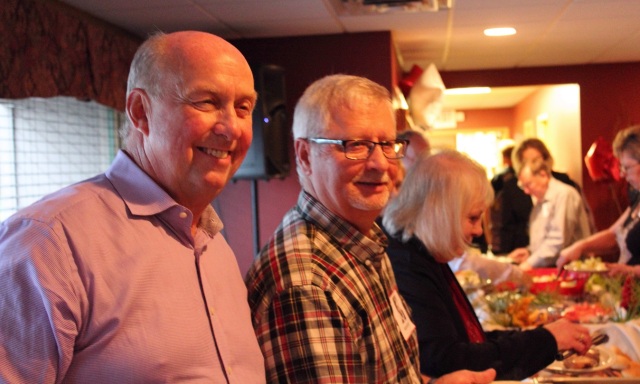 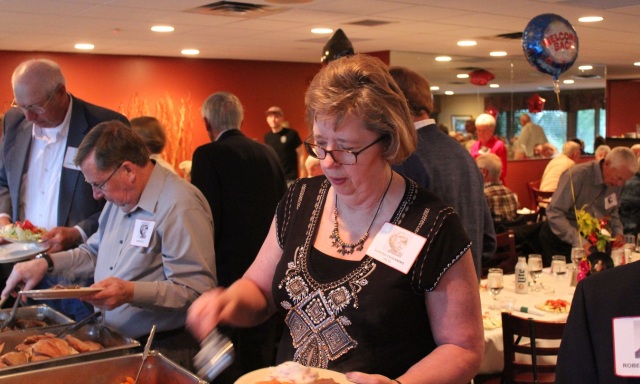 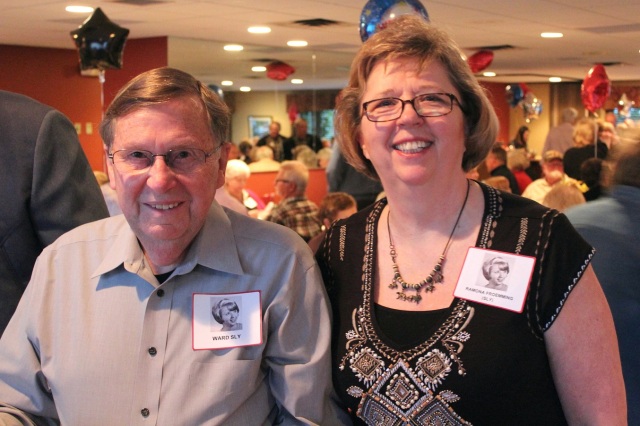 [Ramona Froemming, we shared a lot of classes together.  I didn’t think I was that smart?]

[Lonnie and Lonnie Thornton – he’s still the tallest guy in the class!]

[Karen Schjei and Mark Benson, thanking them again for all the previous reunions.]

[Karen and Judy Blanchard – Judy was the original cub reporter with the high school and later with the Echo, then we were almost neighbors in the D.C. metro area.]

[Jack Seltz and Sue Graves – I always remember Sue beat me a 9-hole golf match and I thought, why didn’t we have girl sports?  Sue was a terrific athlete.]

[Paul Nokes, an intruder from Terre Haute, Indiana, and Van Eastlund.  Thanks for keeping an eye on her guys!]

[Two guys I go back to the age of the dinosaurs with (I know, don’t end a sentence with with).

[The eagle man from Wabasha, Tom Ellis and Eleanor, bookend the Louie Leys.] 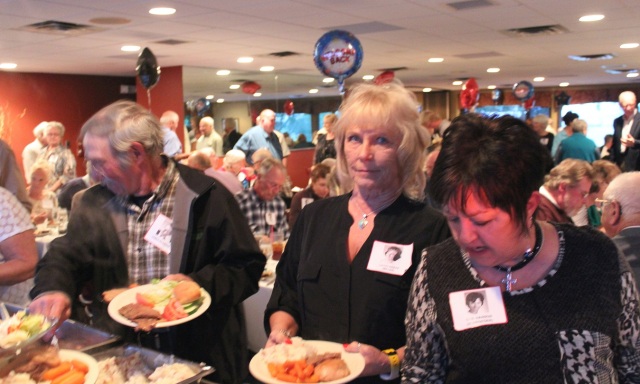 Editor’s  Note: Lorlee and I stood on opposite sides at the end of the chow line, alternating shots.  So, if you don’t see yourself here, we hope Lorlee got it.  I had a couple of questionable quality because I don’t like to use flash. Here Lorlee and I shot at the same time so it looked like I flashed.

[John Kloehn, with a fine display of a healthy meal.] 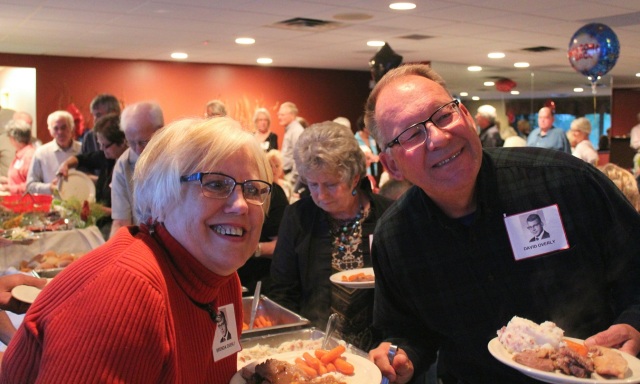 [Lorlee, did you get this?]

[The Di Ann Marquettes – I guess it can go both ways.] 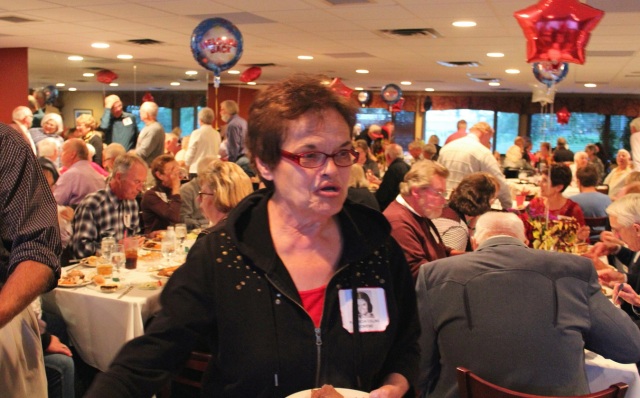 [Pat Collins, the most gold stars at the reunion lunches?  🙂  ]

[Bob Helie and his brother-in-law, Bud Anderson.  Bud and Ruth are at all the games, and Bud is currently working to build another storage building for our Outreach Food Shelf.  I’m sure Bud would not be averse to receiving a few donations.]

[Oh, oh, Lorlee and I pulled the trigger at the same time again.] 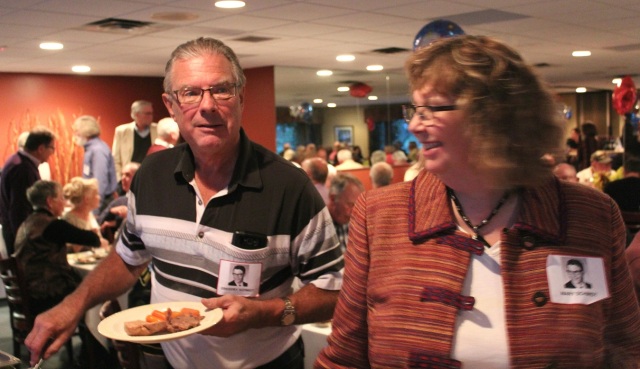 [The Gregory Schmidts, another “new” member at the reunion lunches.]

[Ellen!!  See the first picture on the page!]

[The Teresa Wadsworths, another major cog in the reunion machine.] 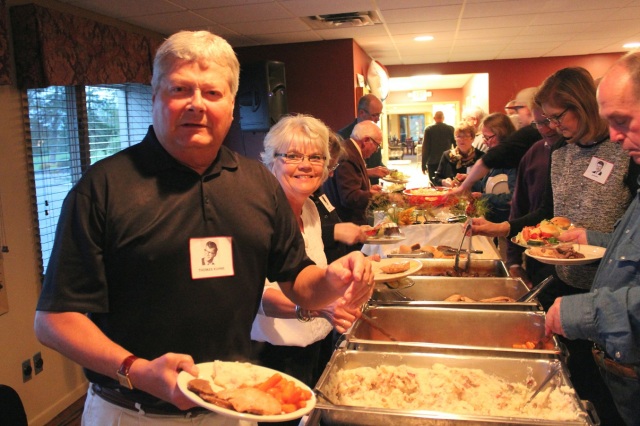 [Tom Kuhne, displaying the etiquette of sharing learned through the auspices of School District 206.] 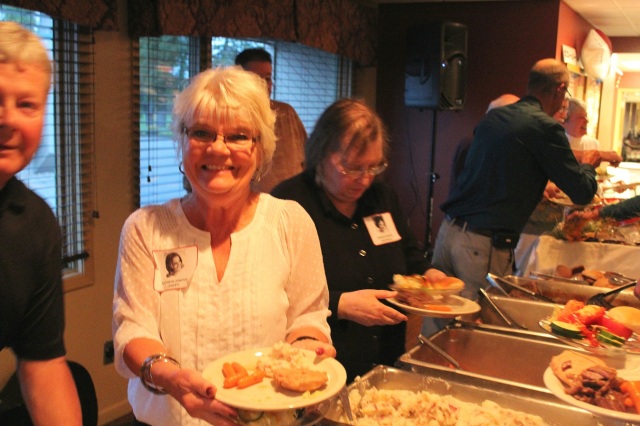 [Kathy Josephs, a regular at the lunches coming all the way from Brainerd, allegedly another lakes area destination.]

[Wanda Meyer, obviously a person of refined tastes – she likes my letters to the paper?] 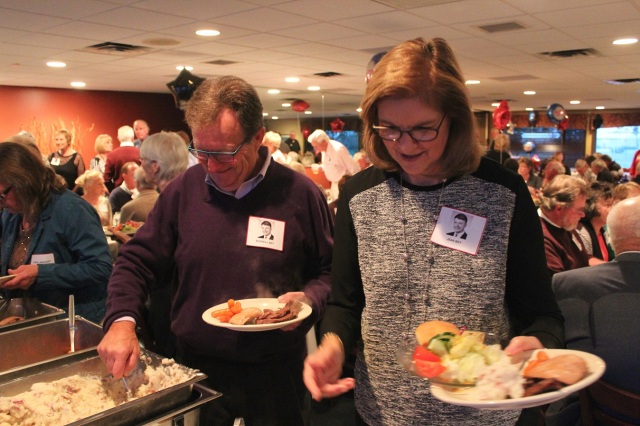 [Russ and Jean Bey . . . Russ and I grew up together in Victoria Heights, now we’re growing old together on beautiful Lake Darling.]

[I liked the photo.  Lorlee’s response: The real reason is that Stan Rolfsrud, Darrell Williams and I went to grades 1-4 together at the Oak Grove Dist 24 Country School (before my parents sent me to Catholic school). The 4th member was Carol Navratil Leaunart who didn’t come on Saturday night.]

[Shari Plato, an interloper I believe, and Jeanne Huberty, a 65er]

[Charles Stark, our basketball center – if you guess Bend, Oregon, you win a cookie.  Betty Pederson asking him to pick up the pace!]

[Known far and wide as Kathy and Kathy!] 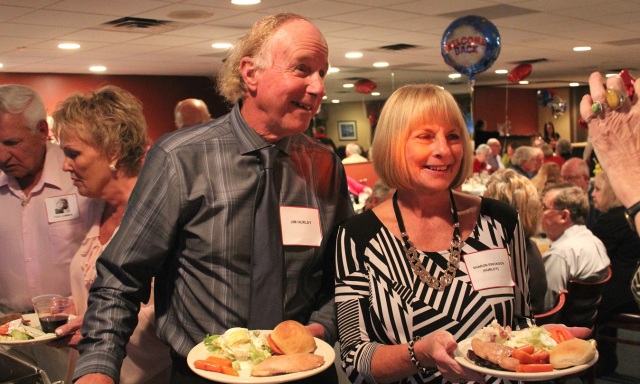 [Sharon Erickson, I believe she said she left Alex in the 8th grade?]

[The Lynne Spellmans, looks like a Christmas Card photo to me.] 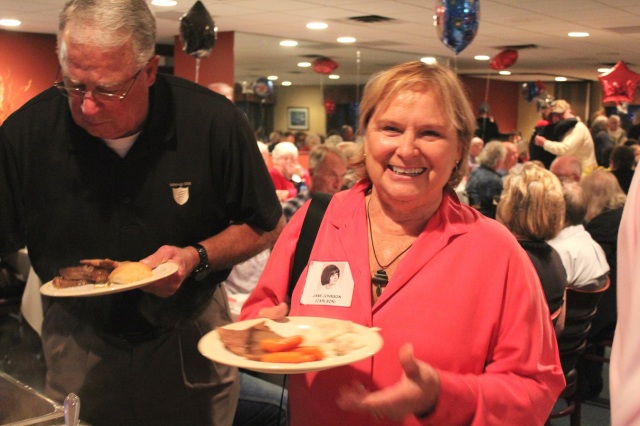 [With Dave Serie close behind.] 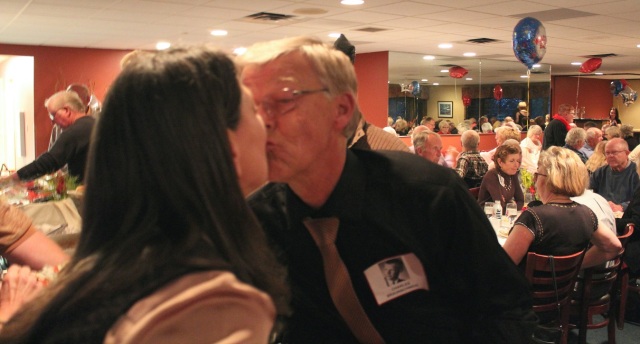 [The only “kiss cam” shot – the Charles Braunschweigs.]

[The Tom Toenjes’s, the driver of the “bus” and the luncheon storyteller.] 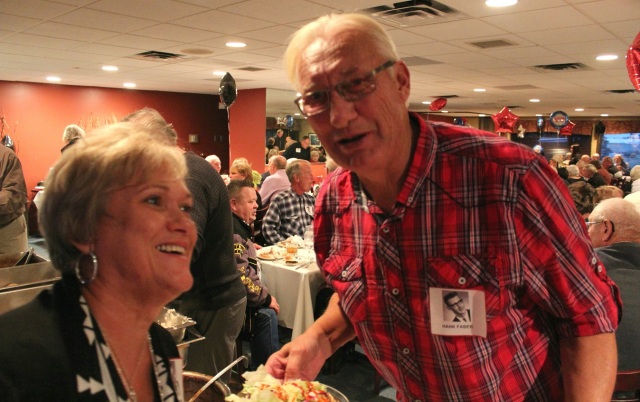 [Steve Froemming, known as one of thousands of Dittberners in the 5-county area.] 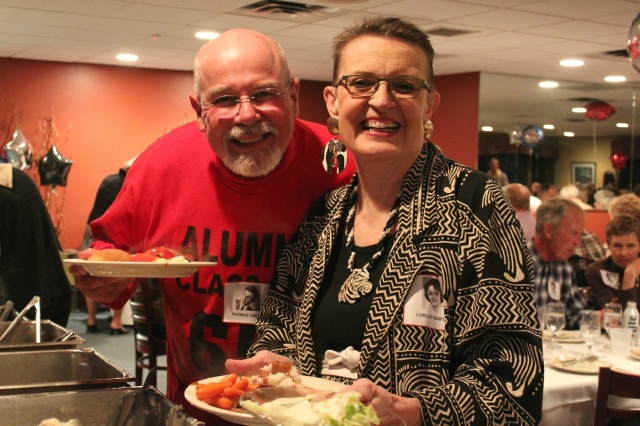 [Our band, the Salty Dogs, the one yet to be introduced is the Boy Tenor, Tom Mulder, on the far right.]

[This is classmate Barb Kloehn Pyle, wrapping up our reunion, a tour de force remembrance of the life and times of the class of ’65. It was funny, touching, poignant, remarkable . . . and if we would have known before she started, something we should have videoed for a permanent place in the school archives.  This is the perfect place to end.]

[Many thanks to Kevin and the staff of the AGC for a super event!]

[And thanks to our teachers.  Without the knowledge you shared with us, I would just be typing random keys on my wife’s Facebook page!]

A final sing off from our reunion band, the Salty Dogs, with their favorite song:

What this woman wants, with all due respect for S. Freud, is for men to stop asking that question and to realize women are human beings, not some alien species.  They want the same things men want.  ~  Diane White  [Editor’s note:  A quiet place to enjoy a fine cigar with a glass of port?]