[The Palace of the People, a/k/a, the Parliament.  There is no way to describe this place other than to say it’s worth your while to look it up.  Construction began in 1983 under the brutal dictator, Nicolae Ceausescu, and was basically completed by 1989 when he was ousted and executed.  It was a monument to himself – built on the high point in Bucharest by displacing the some 30,000 people who previously lived there and basically by round-the-clock “slave” labor.  Ceausescu ultimately hoped to have a subway from the airport to the palace so visiting dignitaries wouldn’t see the miserable living conditions of his “subjects.” It’s the second largest office building in the world after the Pentagon.  More as we go along.]

[We’re in.  We obviously had to go through security, passports and all.  You could not take photos unless you paid $8.00 for that privilege and received a special badge. Surprisingly, Bill and I were the only ones from our group who paid to take photos?  BTW, The Biddies and Anne opted for a tour of downtown.]

[The opulence is striking – like a latter day Versailles.  Here a bust of our guy Cuza and a domed chandeliered ceiling . . . and we’re just starting.  The Romanians have ambivalent feelings about the place – the human and financial cost and by whom it was constructed is revolting to them; the fact that it exists and is a physical marvel, well . . . ] 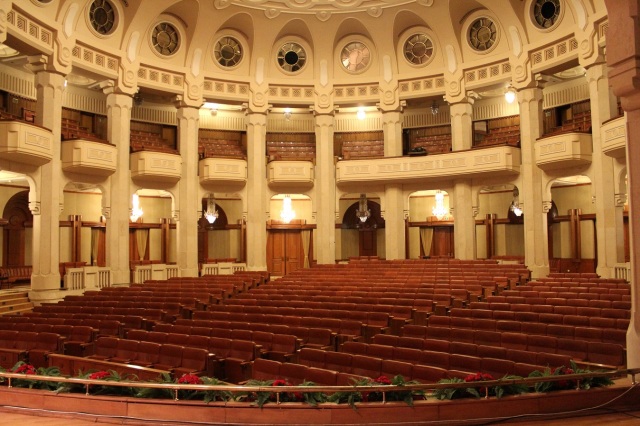 [A beautiful theater, but the stage wasn’t built big enough to actually use it as a theater?]

[The tour said we would be climbing 200 stairs . . . developing those buns of steel!]

[And these were not your basic linoleum floors!]

[Here’s our guide.  She looked like a high school student, spoke better English than any of us, and had extensive knowledge of the place.  We’re going down art infested hallways here.  Samplings immediately following.] 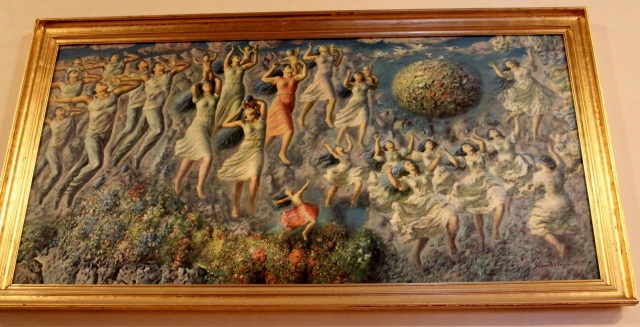 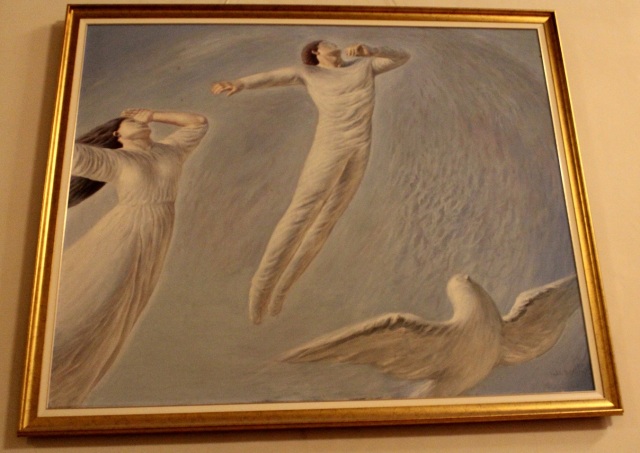 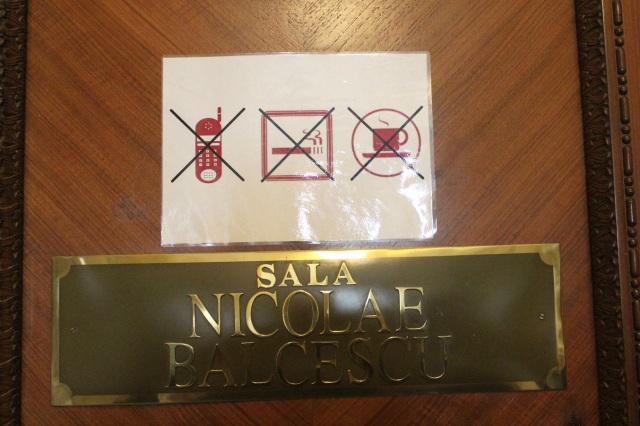 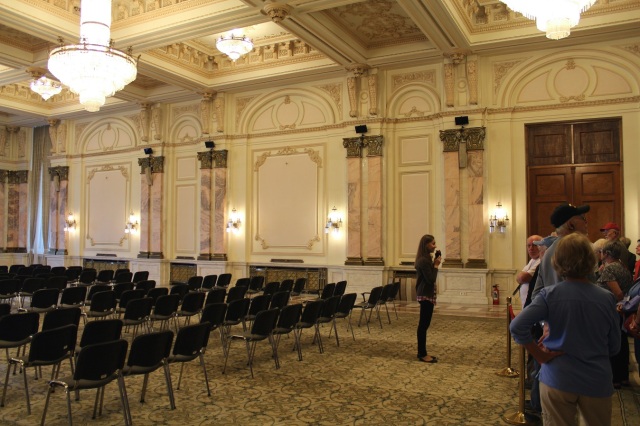 [What do you think?]

[Did you figure it out?]

[Well, this one was a little larger than most.]

[Until now, everything you have seen in this building came from Romania.   These mahogany doors, however, were a gift from Zaire – the only non-Romania feature in the entire palace.] 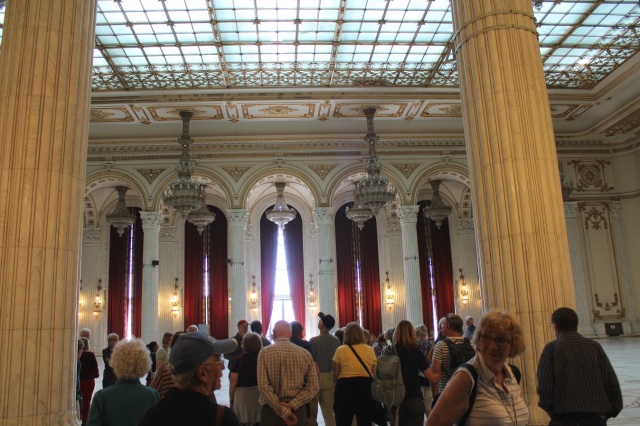 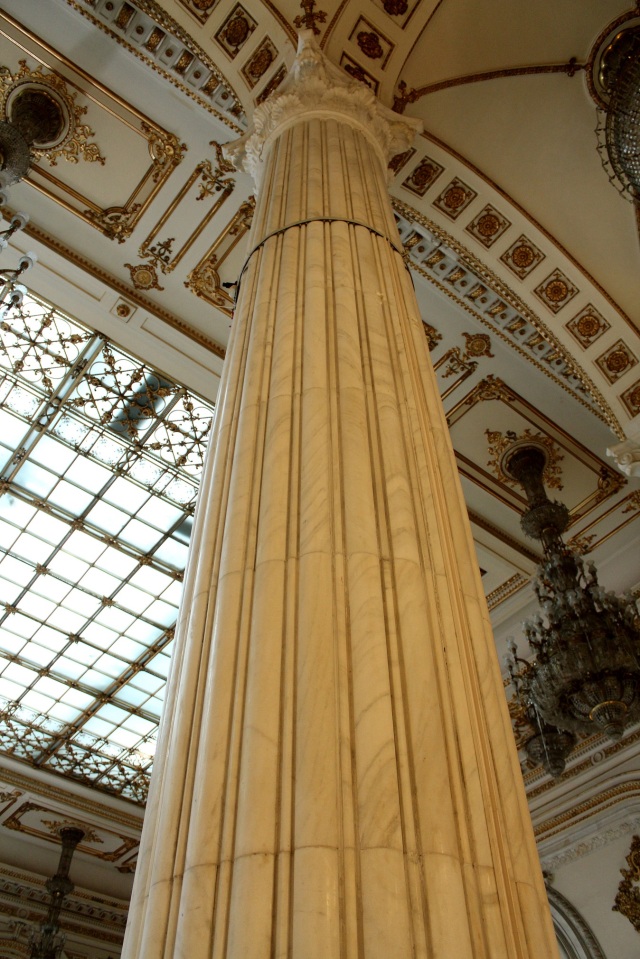 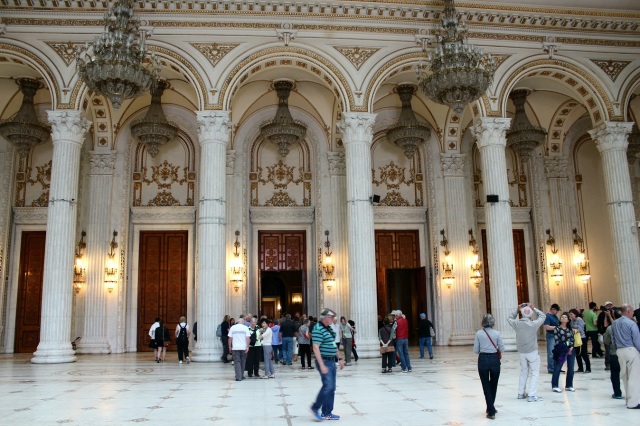 [What can I add?  I believe Nadia Comaneci was married in this room, the first event held in the palace ‘for the people’ after the overthrow of Ceaucescu.]

[Still climbing stairs to what . . . another world record!  The largest curtains in the world!]

[The view, pretty much, from every landing so far.] 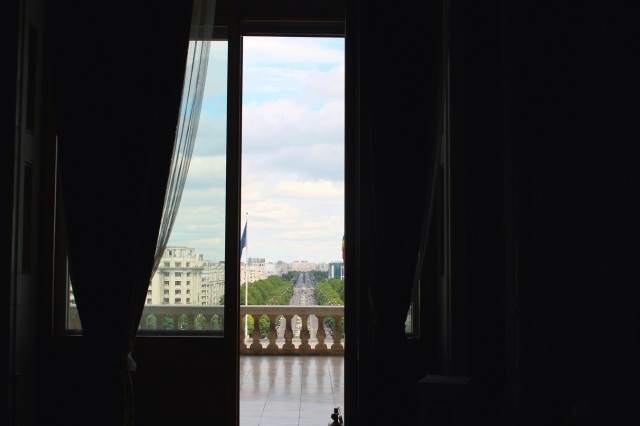 [And this is the view from the balcony.  We had climbed 200 stairs to get to this point . . . to what our guide noted was the “ground floor!”] 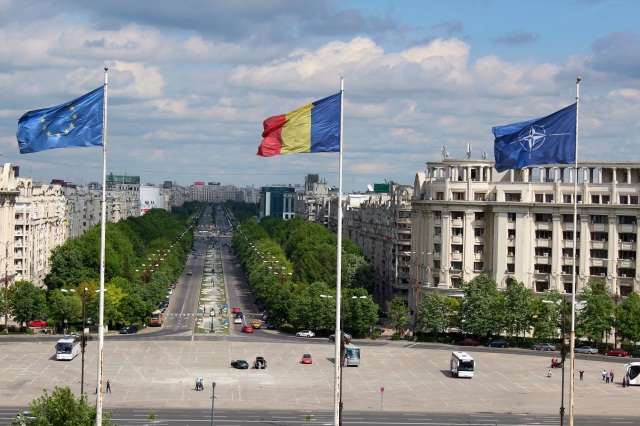 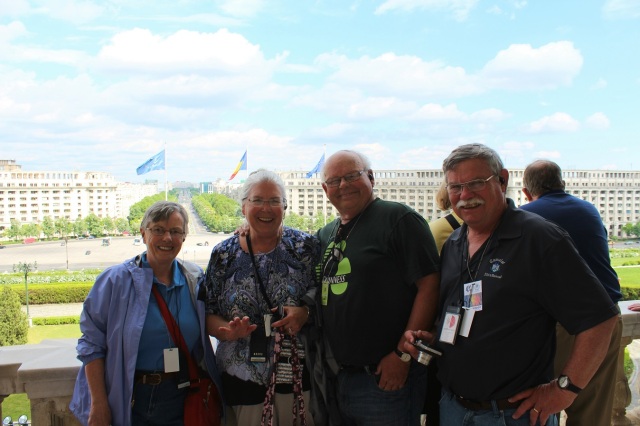 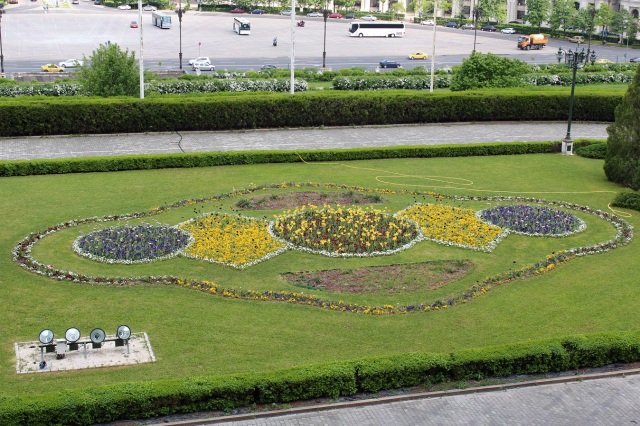 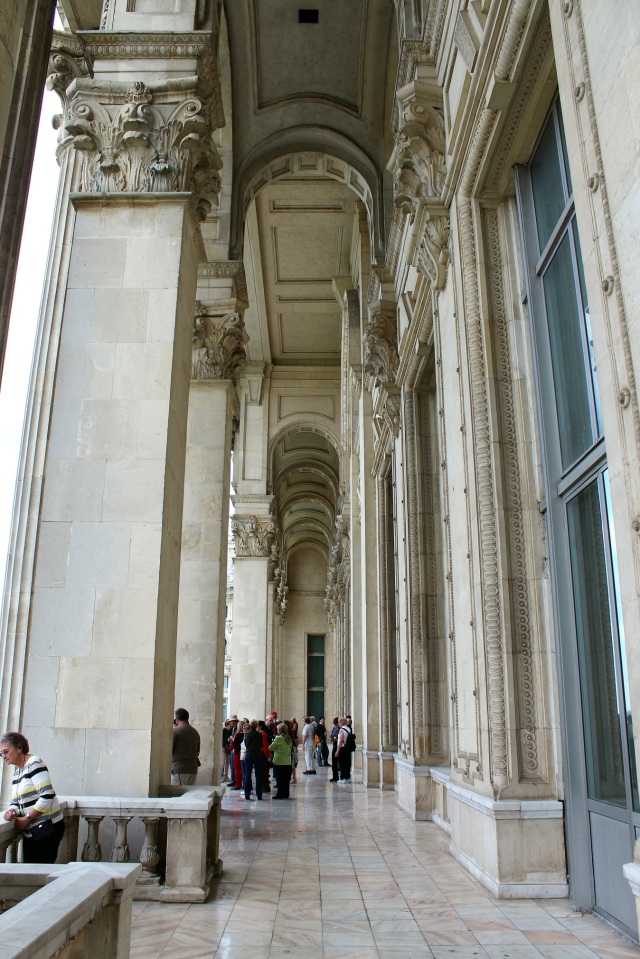 [And then we were done.  We are going to the parking lot across the street for outdoor photo ops.  Our guide noted that we had walked one and a half kilometers, climbed 200 stairs, all in an hour and half, and saw . . . three percent of the building!]

[Where we just were.  The balcony we were just on is barely visible over the greenery in front of the building.] 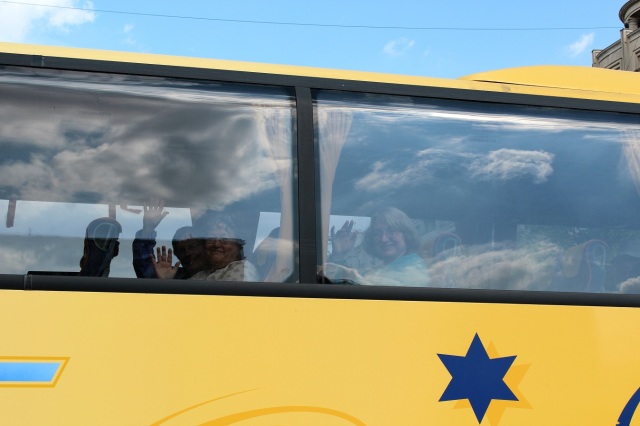 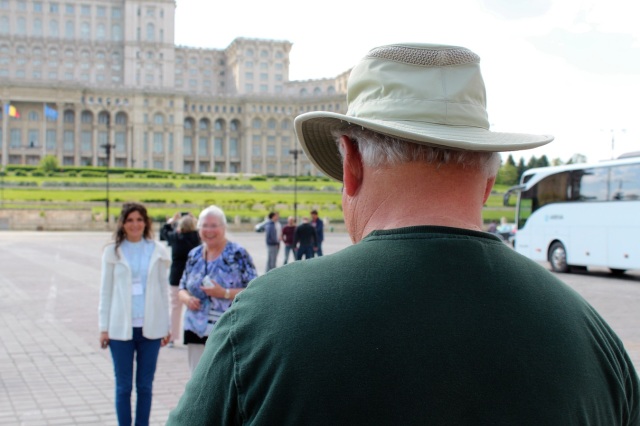 [Well, I was trying to get a picture of our guide with Kathy, but the camera somehow focused on Bert’s neck . . . not that there’s anything wrong with Bert’s neck, mind you.]

As previously noted, Anne, Reetz, and the Super went “downtown” while we toured the Palace.  There’s never enough time to do everything.  Here’s the Super’s coverage of the city, just to give you a flavor: 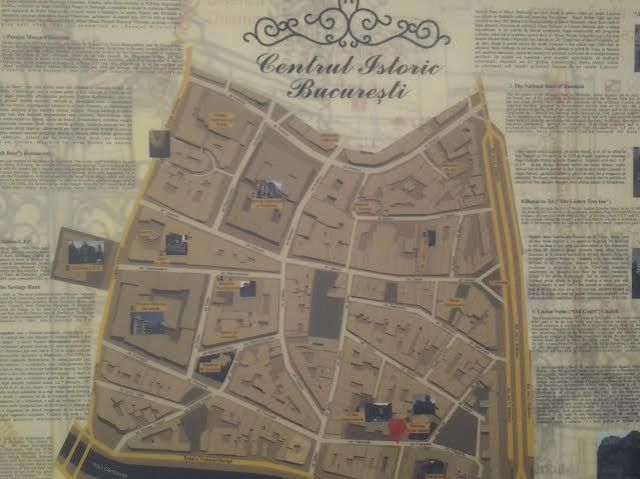 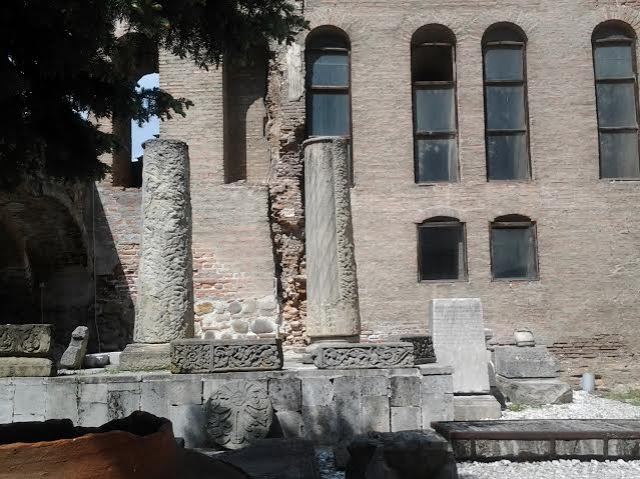 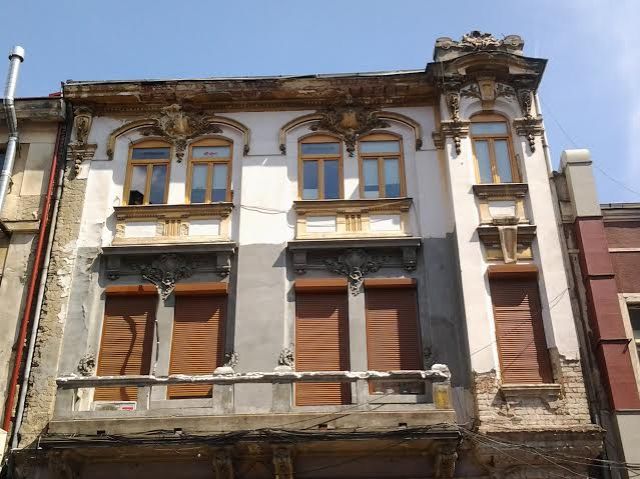 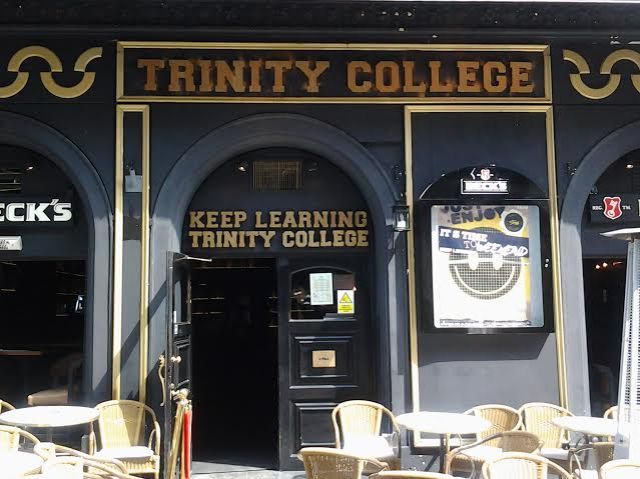 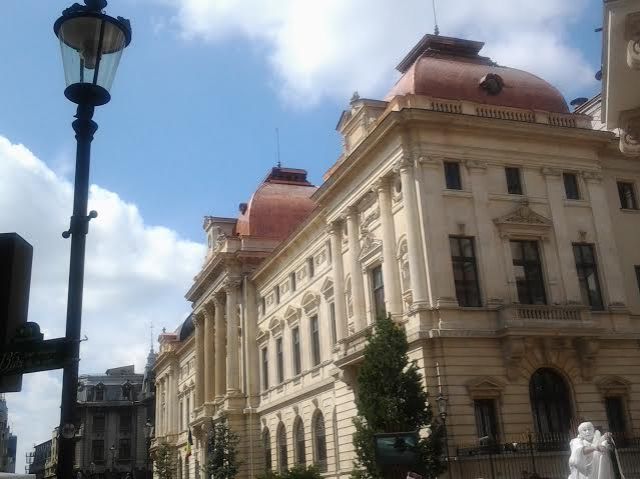 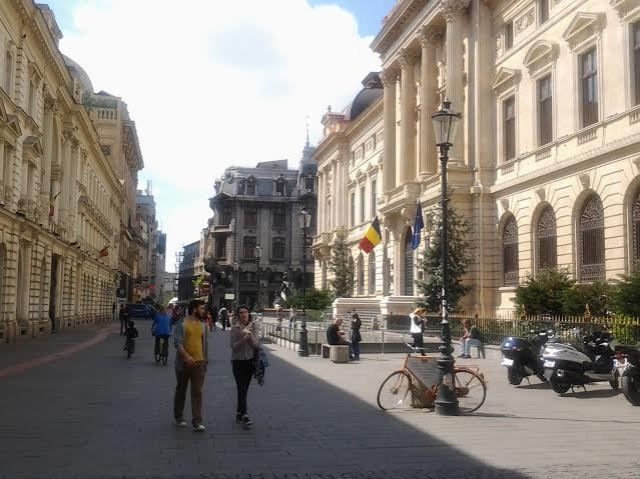 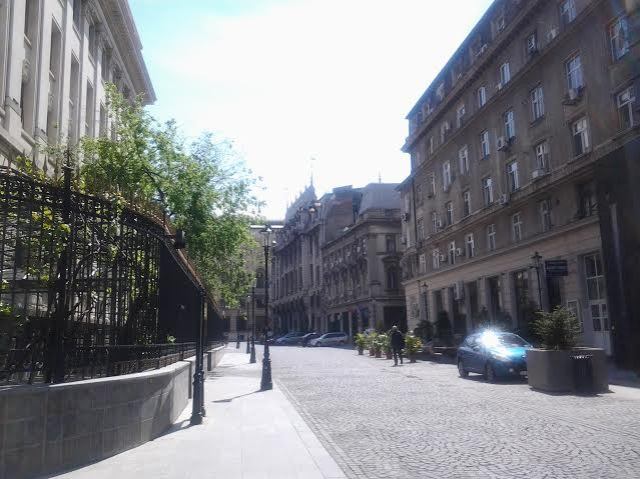 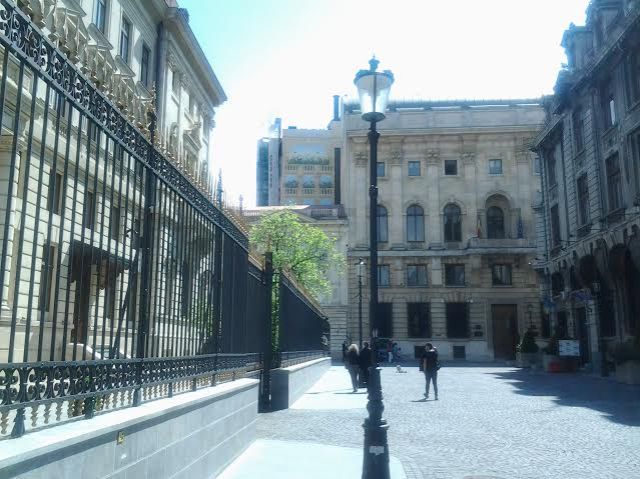 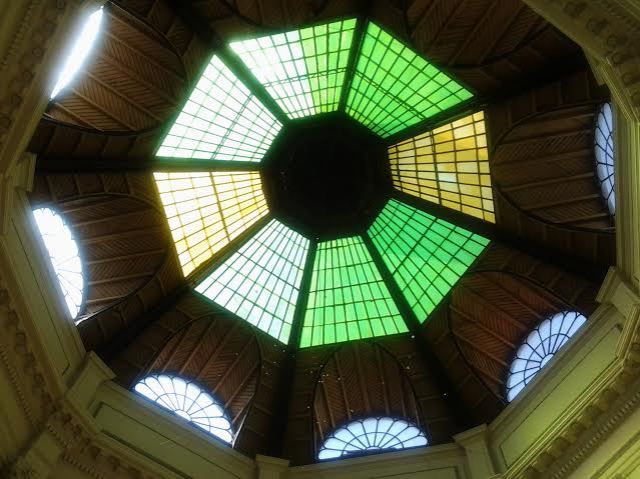 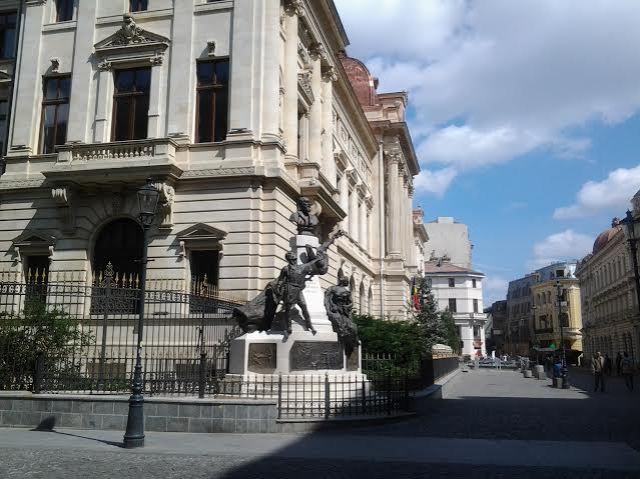 [Ending with a final kiss to Reetz, thank you Super!] 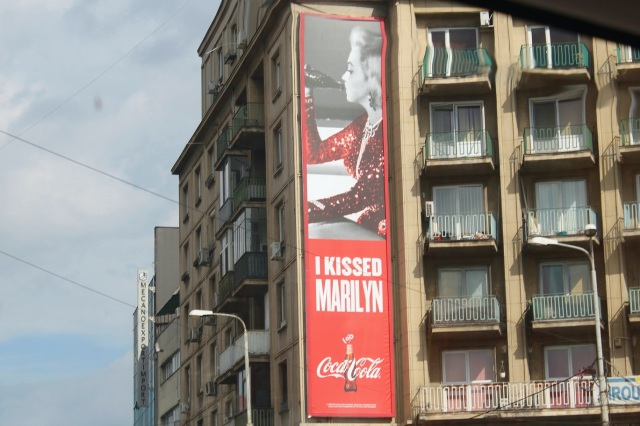 [But I guess we weren’t done kissing.] 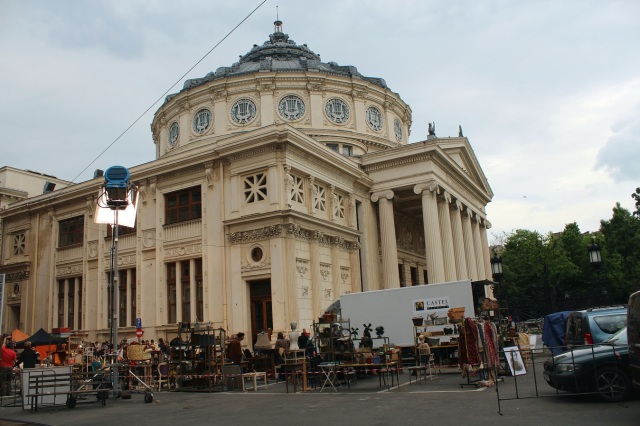 [We checked into our hotel and then walked out into the neighborhood for dinner.  Right around the corner from us was the Romanian Athenaeum, the national theater, where a movie was being made.  Still on the lookout for Kim Kardashian!] 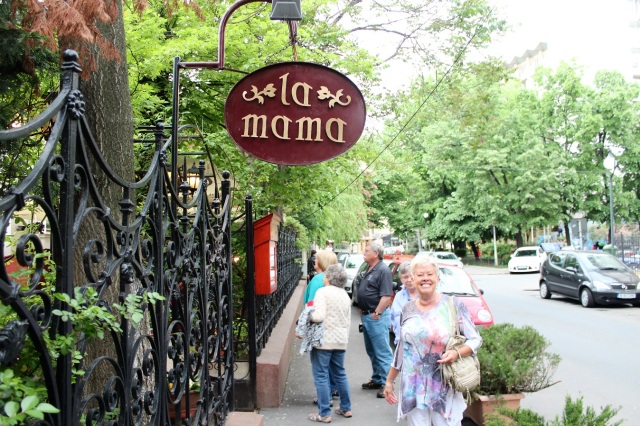 [We stumbled upon Yo Mama!  Well, close enough.  We started out sitting outside because it was a lovely setting, but then the rain came . . . ] 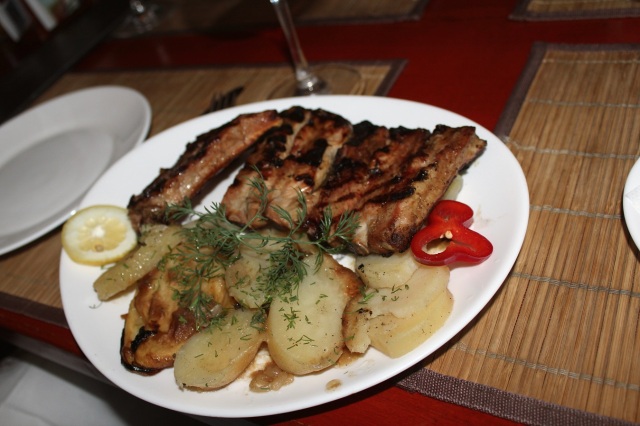 [We moved inside, and while the food was good, the switch in locale apparently messed up the servers and a couple of us had long waits.  So, we decided we would seek dessert elsewhere . . . ]

[Such as this . . . a designated CHOCOLATE shop halfway between the restaurant and our hotel.  Uffda!  The menu was in the form of a large coffee table book, with each dessert basically having its own glossy page!  Woo-woo!] 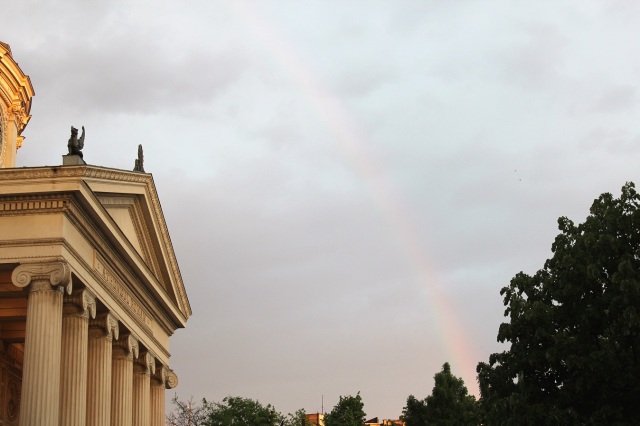 [Walking back to the hotel, our last night on the continent, it seemed appropriate that there was a rainbow over the Romanian National Theater!  🙂  ]

The Romans spent the next 200 years using their great engineering skill to construct ruins all over Europe.  ~  Dave Barry