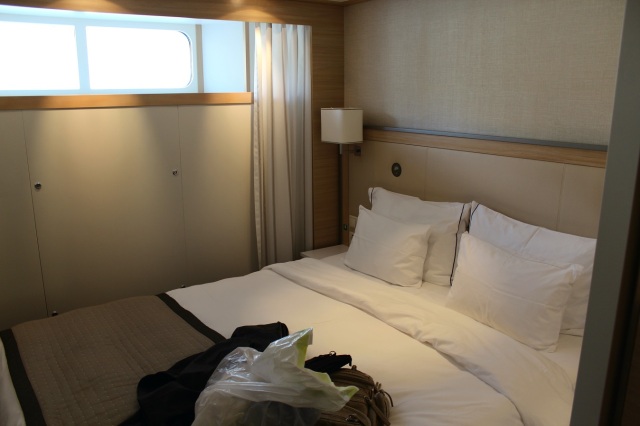 [Since my “whoop-dee-doo for my Subaru” cub reporting on river cruising has elicited inquiries regarding such, the following is offered as a public service. This was our room on the good boat, Jarl. We opted for lower lever, porthole windows, because most of the cruising was at night, and it saved us $1,500. If you’re going to be doing day cruising, you may want upper deck for bigger windows. The quarters are always going to be small, but you only use the room for sleeping.] 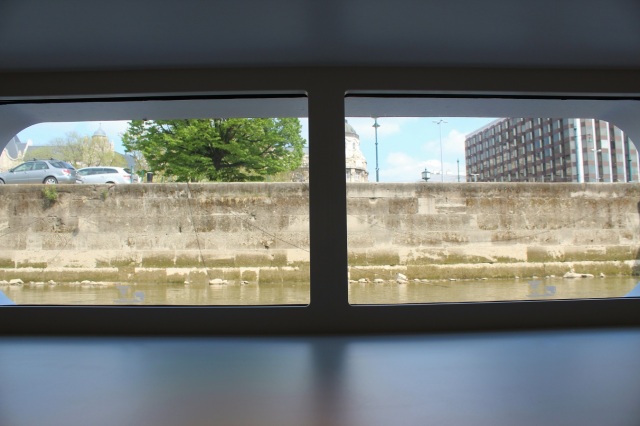 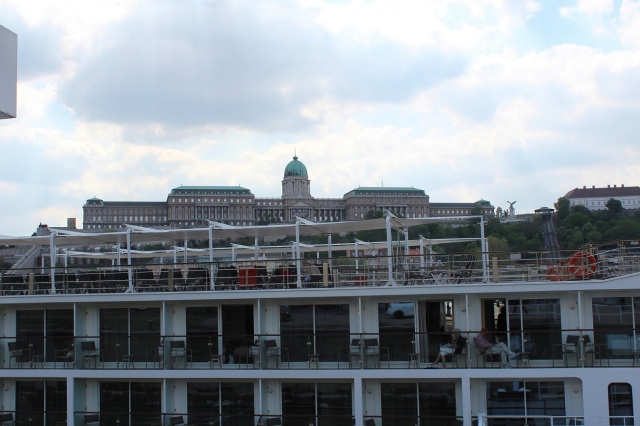 [Our window “view” and the boat ramp with Chain Bridge in the background.]

[Once we’d settled in our rooms, it was time for our first shipboard nosh.  The Biddies seem quite happy about that!] 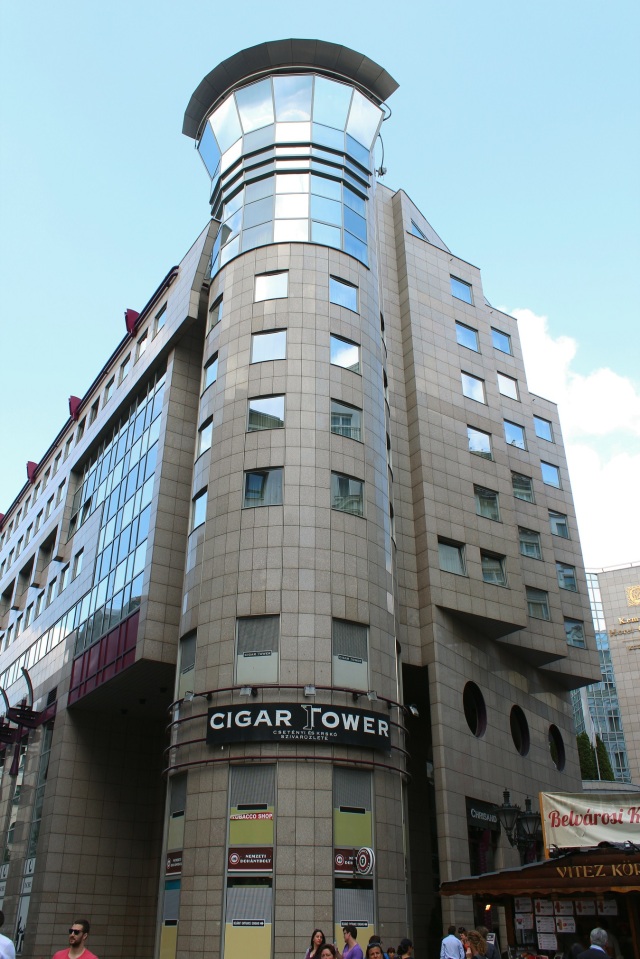 [After lunch it was time to hit the city again.  We wouldn’t departing until later in the evening.  And lest you were wondering where the rest of our party was during the morning bus tour, Anne reports:  Yes, it is when Bert and Kathy went to the opera, Bill and I went to the synagogue and some other places and then met B&K at the Parliament in the afternoon.]

[The Dohany Street Synagogue is the largest in Europe and the 2nd largest in the world. We decided it was a must see, not only for its size but for its uniqueness.  It’s very churchlike.  Built in the 1850’s, it was restored in the 1990’s to fix damage from WWII.]

[A guide seemed very young (well, to us, that’s anybody under 50) but her unaccented English was better than mine.] 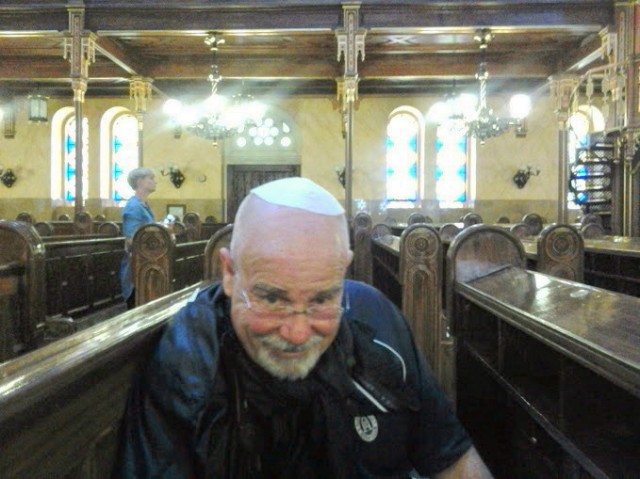 [A kippah was a requirement for entry.  Quite dashing, n’est pas?] 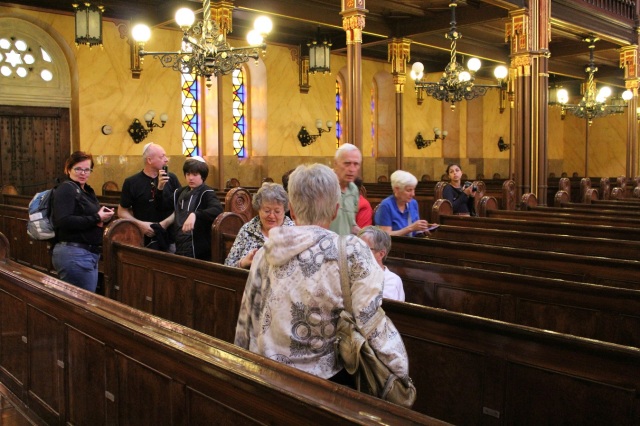 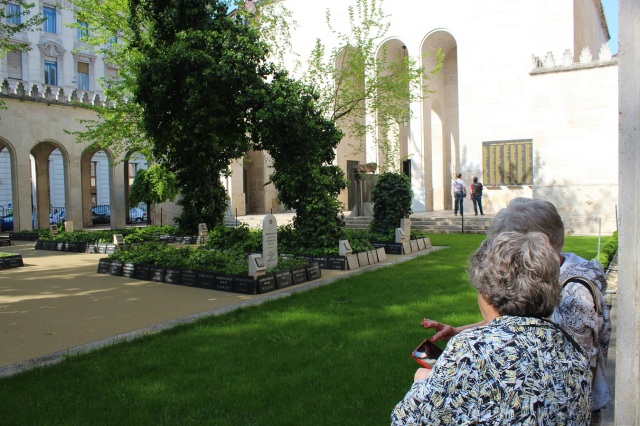 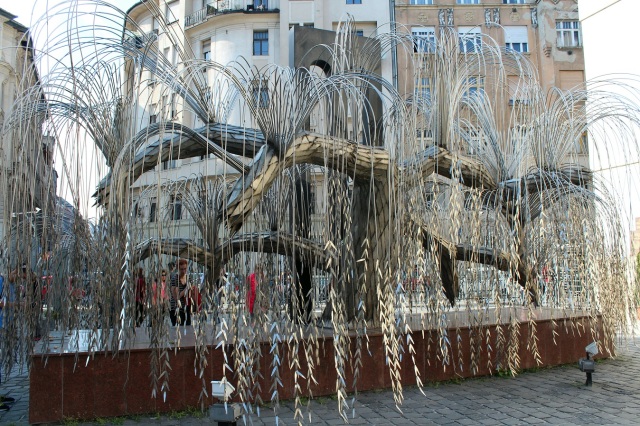 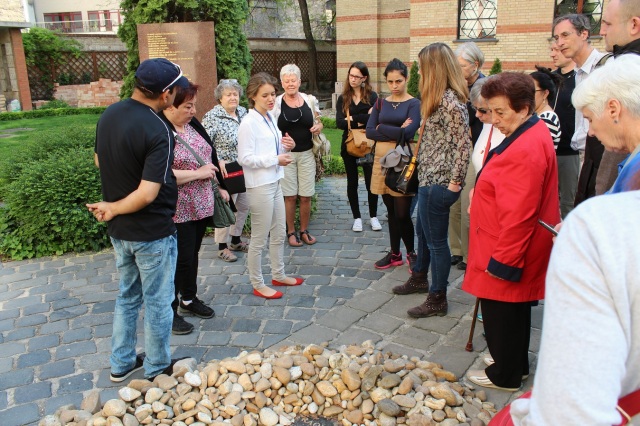 [Over 2,000 people are buried in mass graves here.  They died from cold and hunger in the winter of 1944-45.  There is also this memorial to the 400,000 Hungarian Jews killed in WWII, and a memorial to those who tried to save them.] 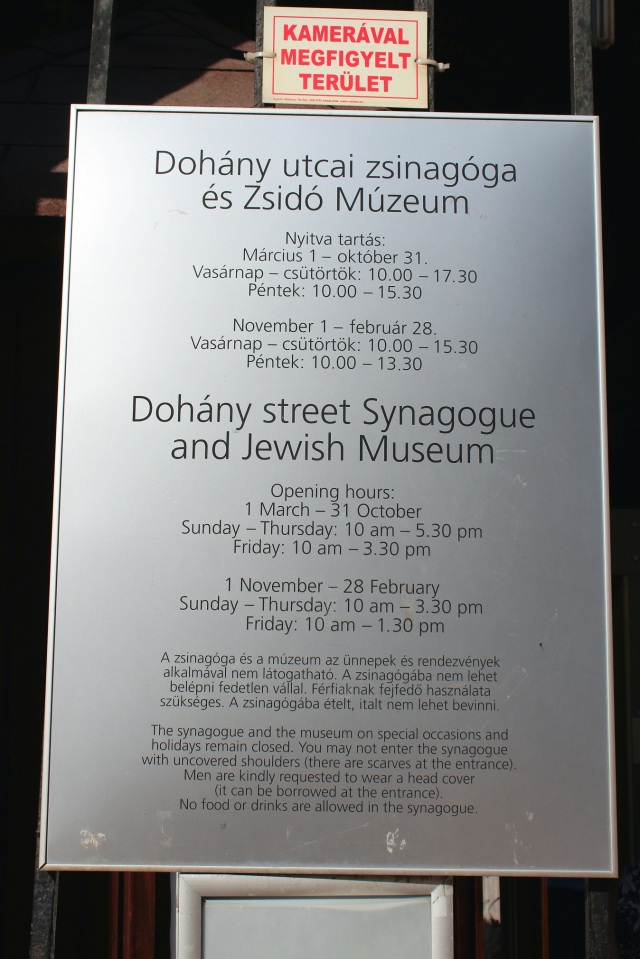 [“Cornelia!!”  That’s what The Biddies shouted when she first appeared on our bus to welcome us to the cruise.  She’s the Program Director, meaning she’s in charge of everything to keep the customers happy.  And the coincidence is she was also our Program Director on our not without incidents Portraits of Southern France cruise last summer!  We thought she did a great job of trying to track Reetz’s forever lost luggage, and of guiding us through the days of boat immobility and the nationwide train strike.  Needless to say, we were happy to see her again.  She’s a lanky Austrian who is, of course, multi-multi lingual.] 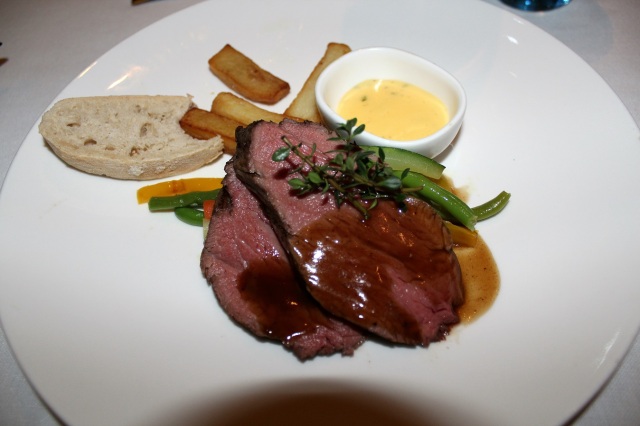 [Your job, should you accept it, is to match the shown dinner courses with the menu!]

[A little evening stroll topside to walk off dinner, then back down for the evening’s entertainment . . . ]

[Cornelia introduces, for our dining and dancing pleasure, Hungarian folk music and dance!] 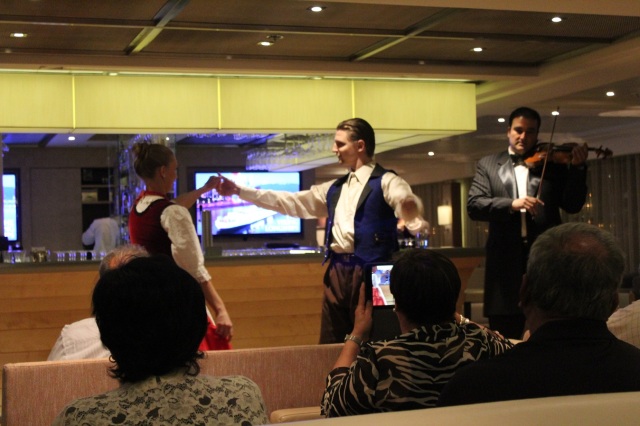 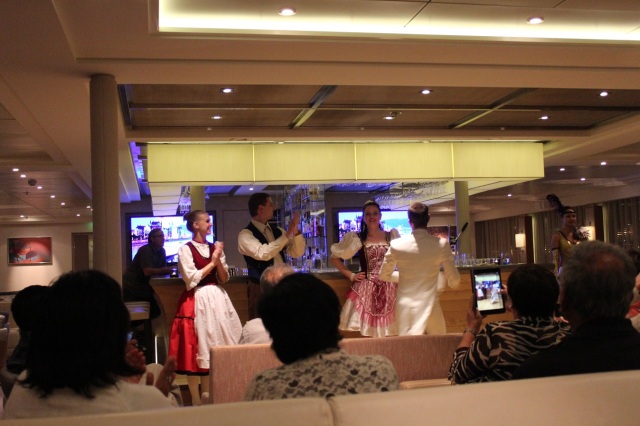 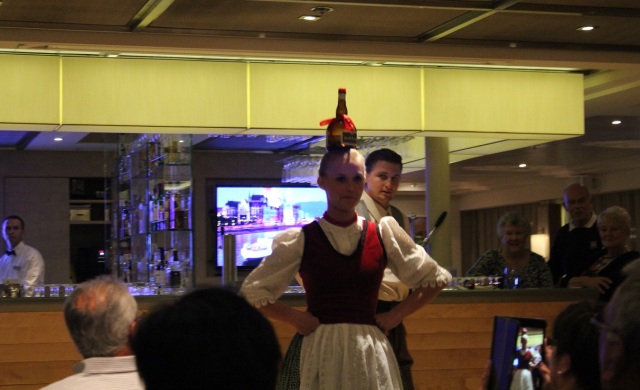 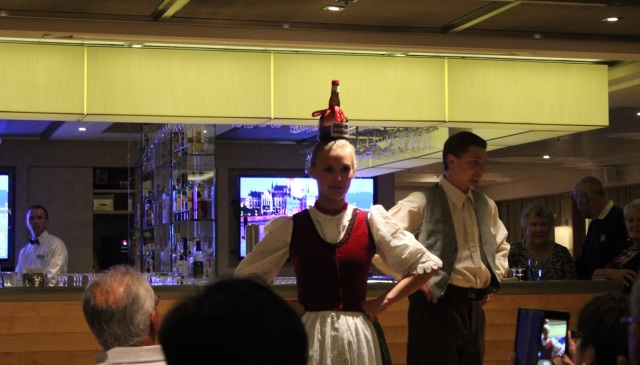 [In Hungarian folklore, if you can balance a bottle of Grand Marnier on your head for three consecutive dances, you will eventually have brunch with Kim Kardashian.] 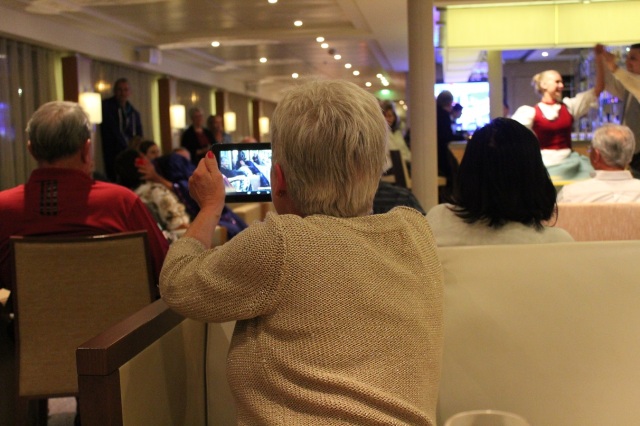 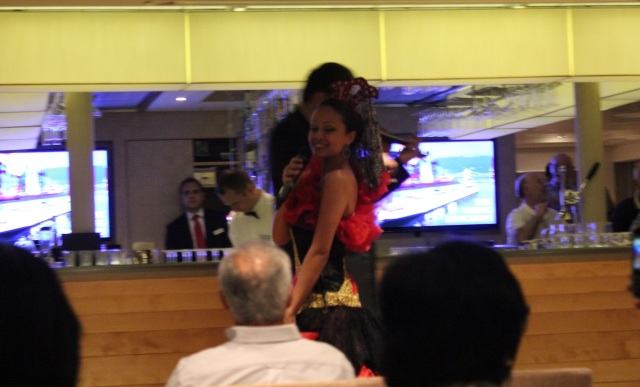 In the fine tradition of Budapest river cruising, you hoist anchor at 9:00 PM, boat under Chain Bridge, do a U-turn, and head down river where all the landmarks you have now all grown to know and love – the Parliament, Buda Castle, Matthias Church, et al – glow in an incandescent wonderland that alone is worth the price of admission.  Enjoy (reminder, you can double click each photo to see them full size) . . . 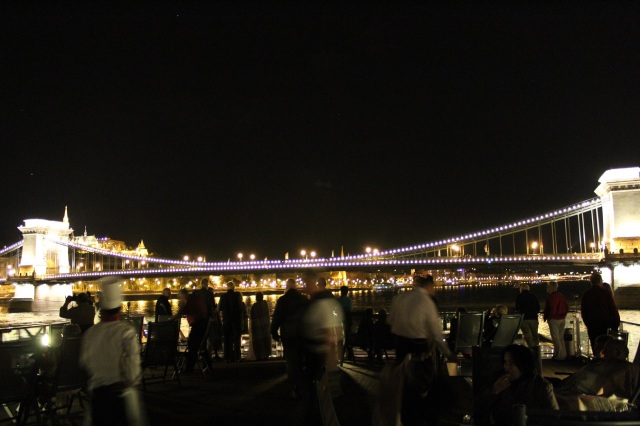 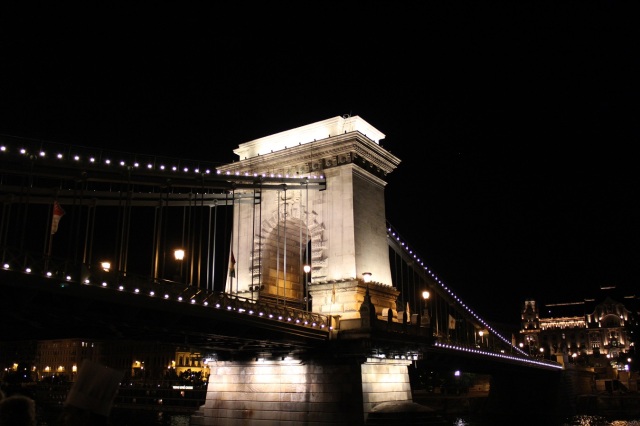 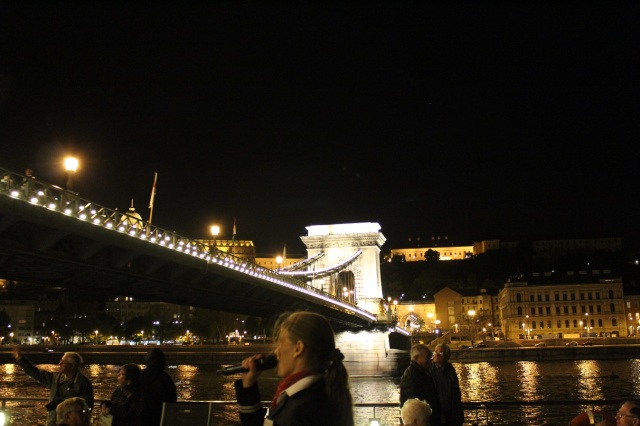 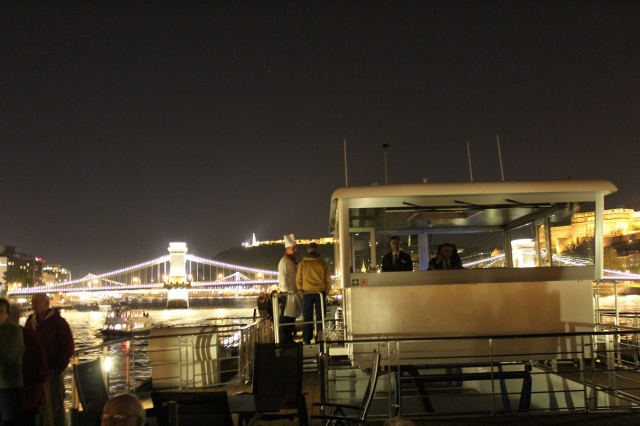 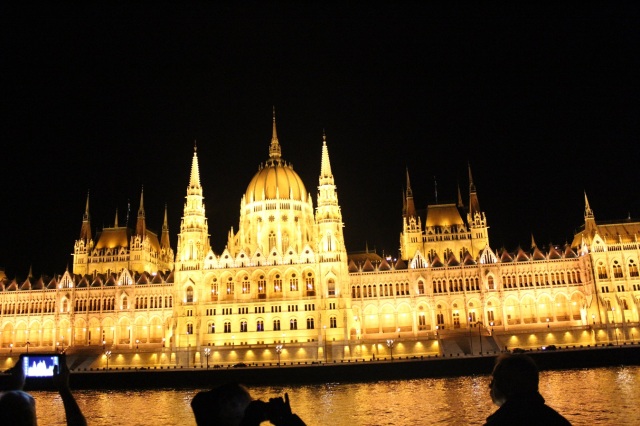 [As we head off into the night under Elisabeth Bridge, Cornelia (far right) leads the assembled masses in a rousing chorus Edelweiss (OK, I made that up.)]

Fifty percent of the world are women, yet they always seem a novelty.  ~  Christopher Morley