[Well, our home away from home for a while.  Let’s go see it!  This is downtown St. George, Utah.  The last time I went through here it was a small town that just happened to be about halfway between Las Vegas and Utah’s national parks.  The population in 1980 was 11,000; now it’s 77,000.  Can you remember another city on this road trip that went through similar explosive growth over the same time period?  If you said Loveland, Colorado, you win a cookie!  I think I kinda prefer Alex’s 2 per cent per year growth rate.  😉   Oh, the “D” on the background cliff is for Dixie State University, but that’s another story.] 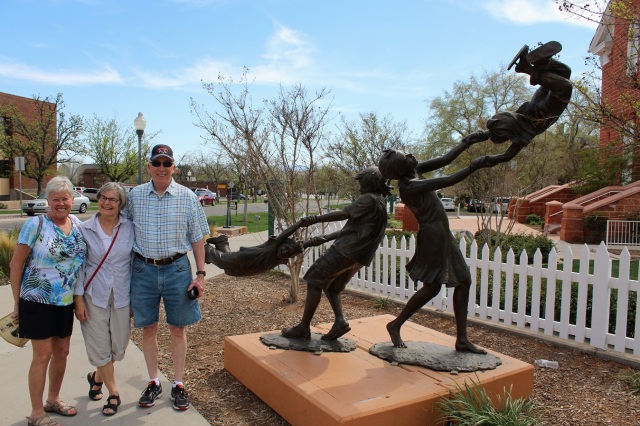 [Our hosts and the Super provide perspective . . . and occasionally comic relief.] 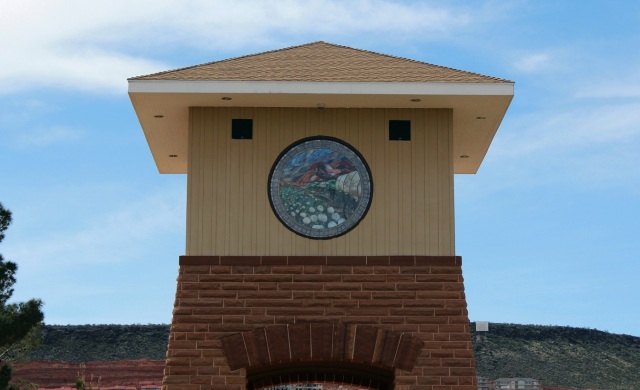 [The city is awash in street side sculpture . . . kinda like Bemidji.] 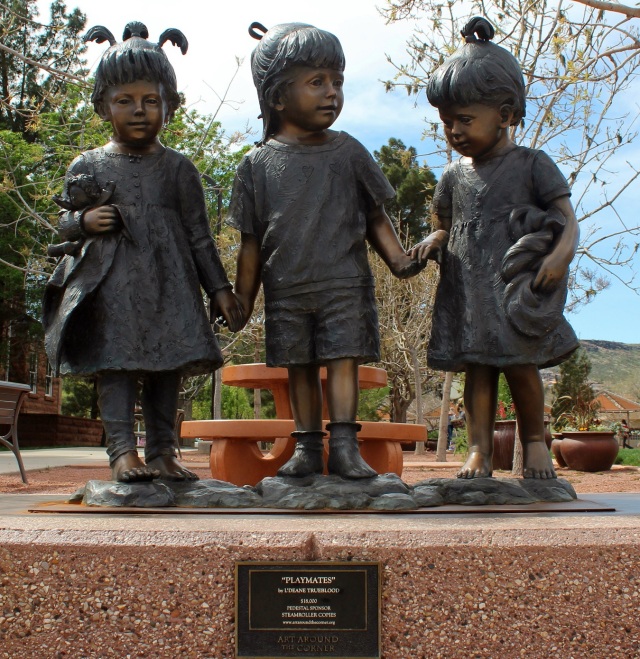 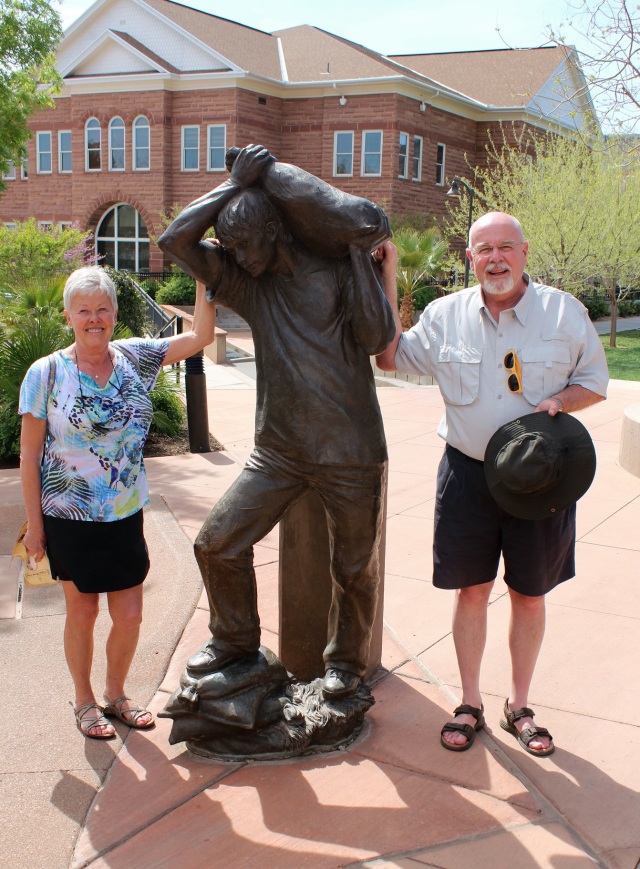 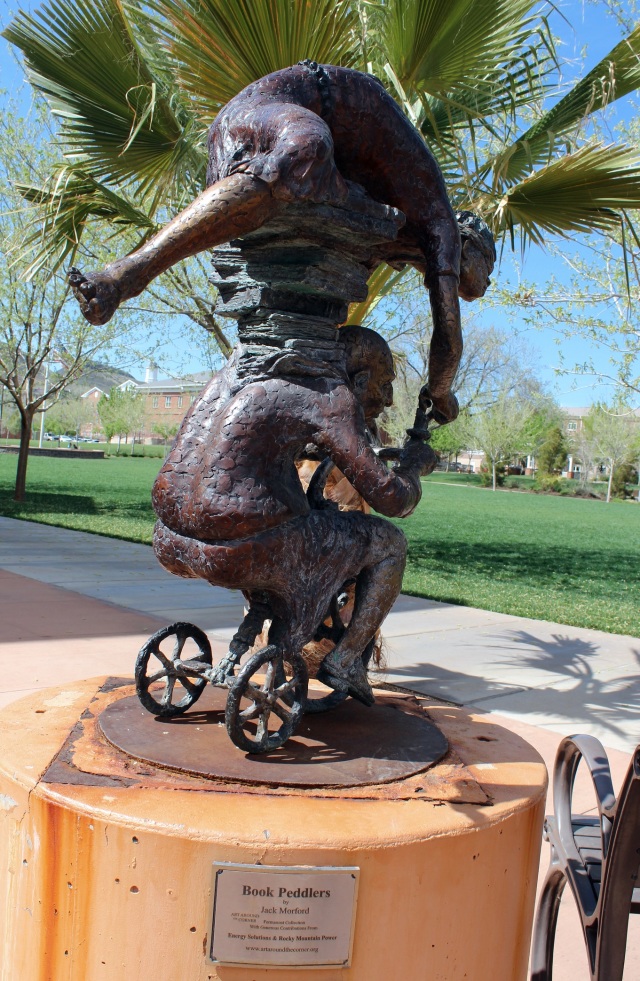 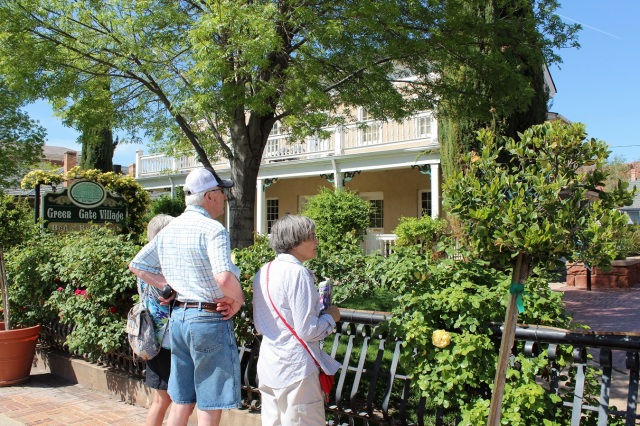 [Always remember as you limp, stumble, or hopscotch through life . . . CHERISH YOUR LUNATIC FRINGE.] 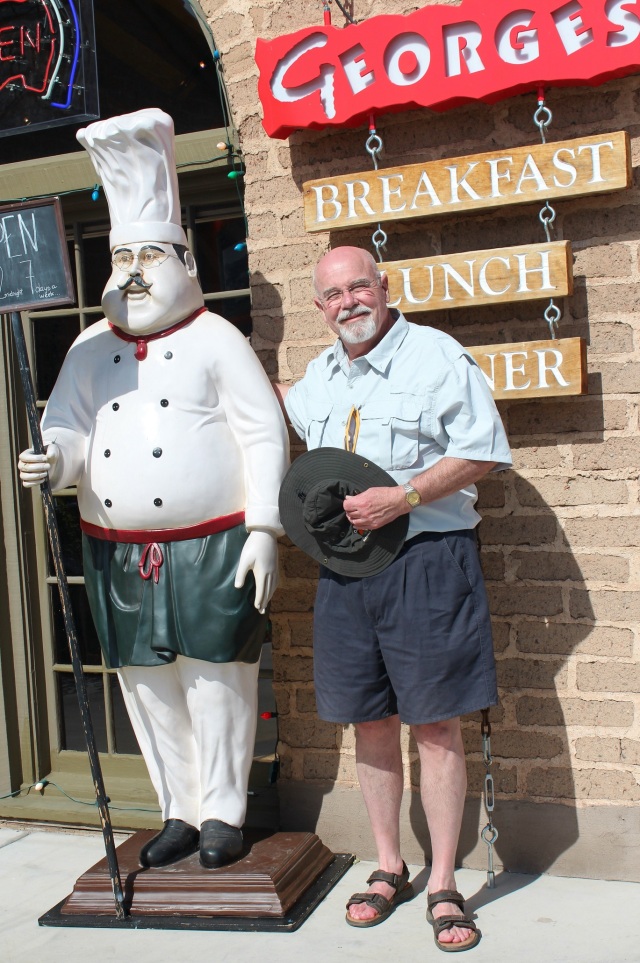 [Speaking of lunatic fringes, it appears thoughts of the ole feed bag are at hand.]

[Hmmmm, what should I get here when we come back for dinner?]

[Hmmmm, who gets to stand next to the horse’s hind parts?]

[Hmmmm, who gets to stand next to the firetruck’s hind parts?] 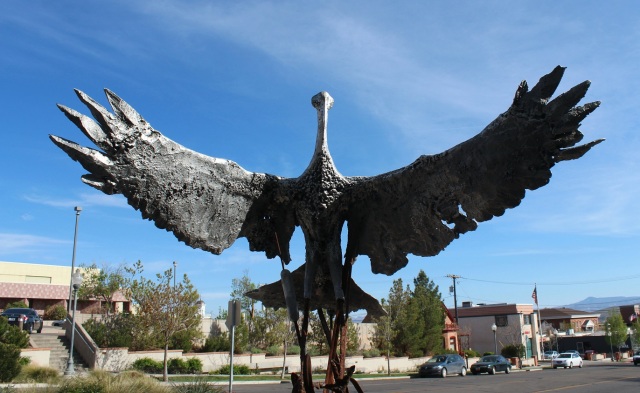 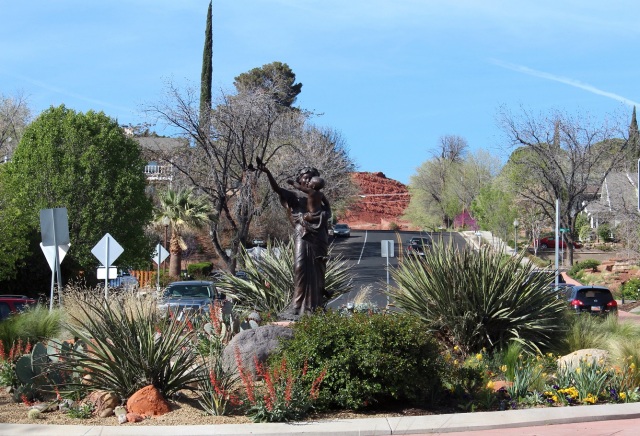 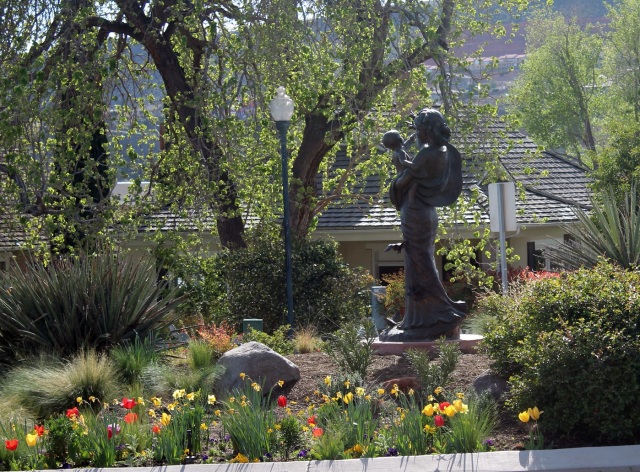 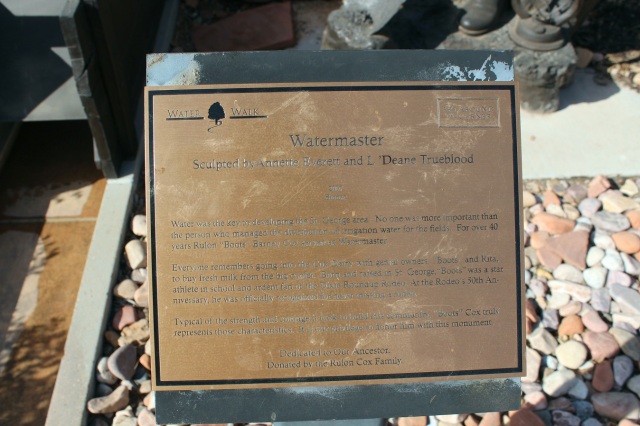 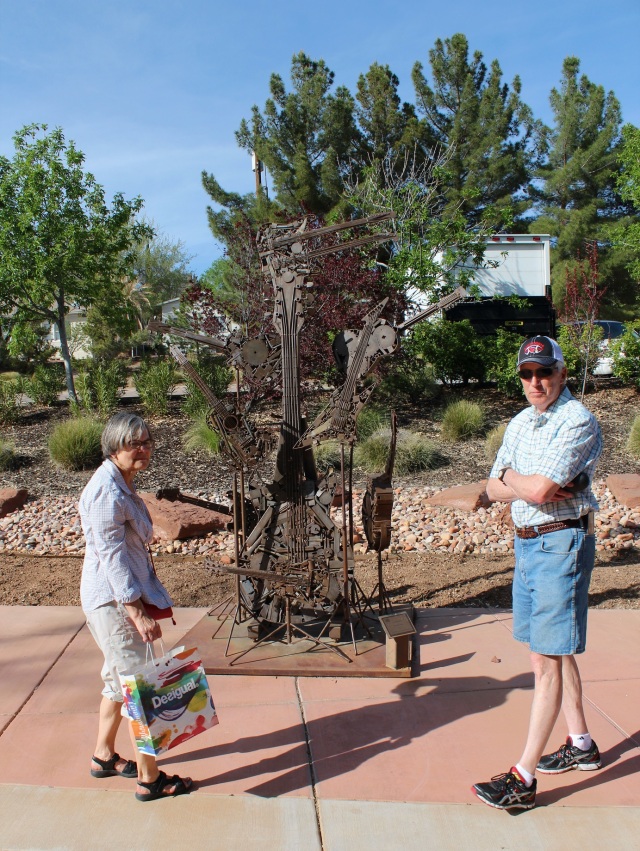 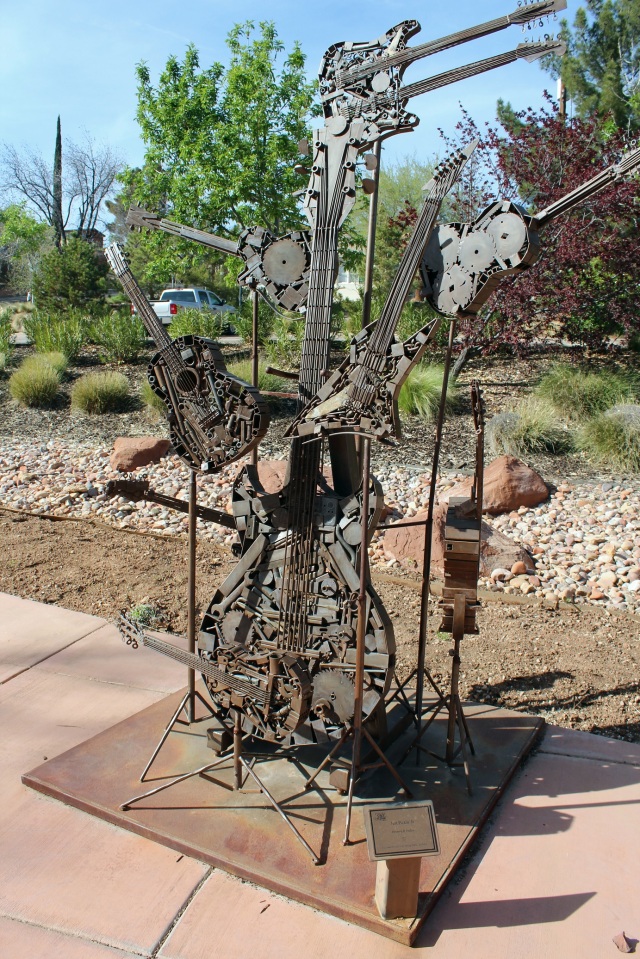 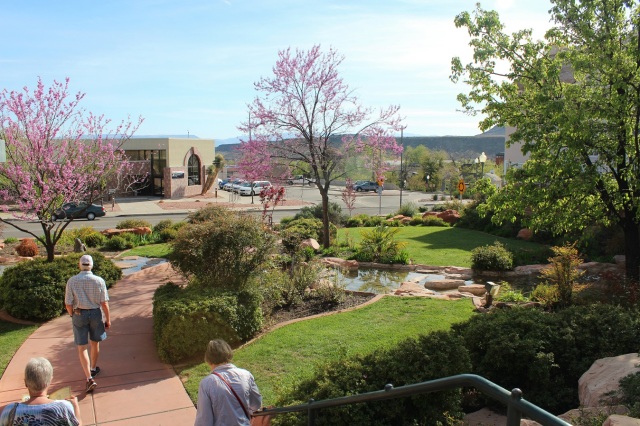 And now for the Fat Boys: 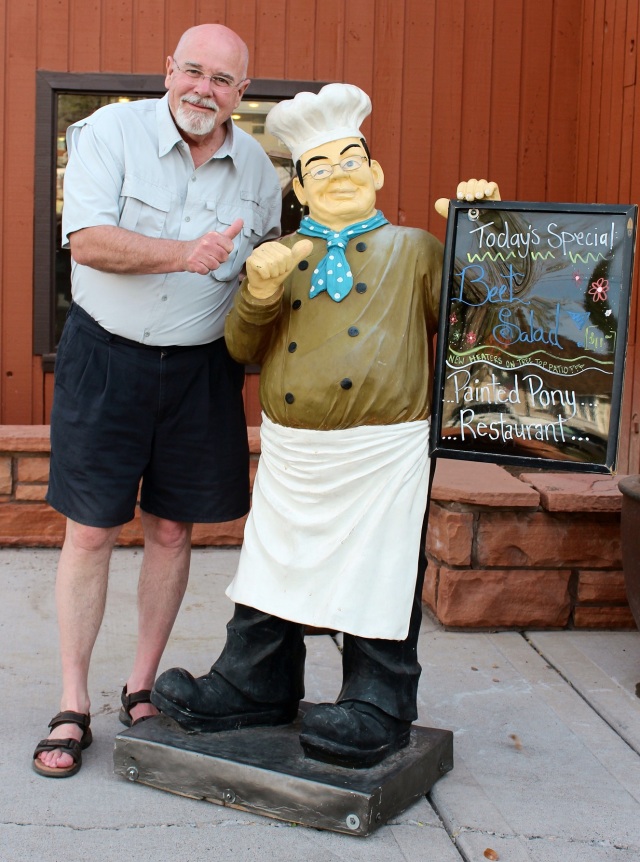 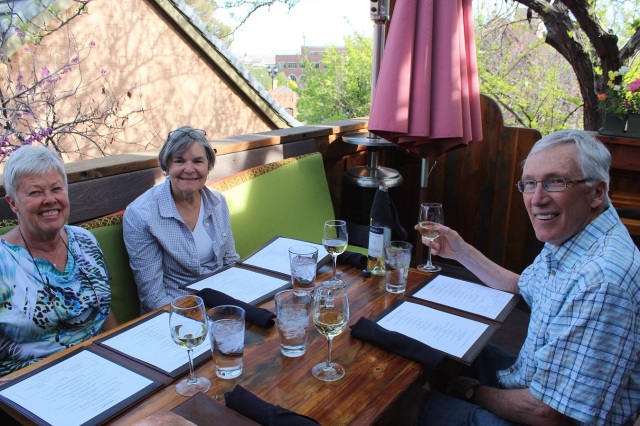 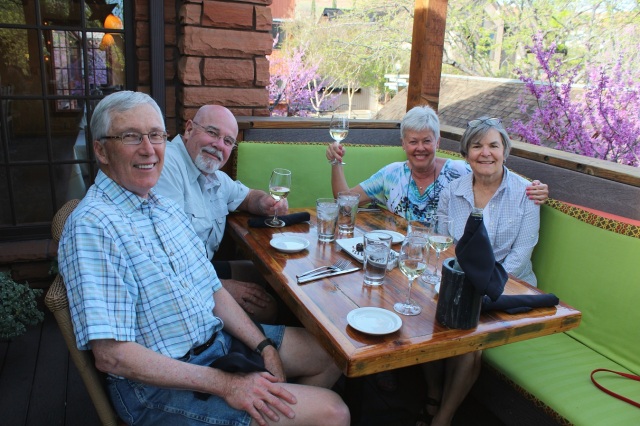 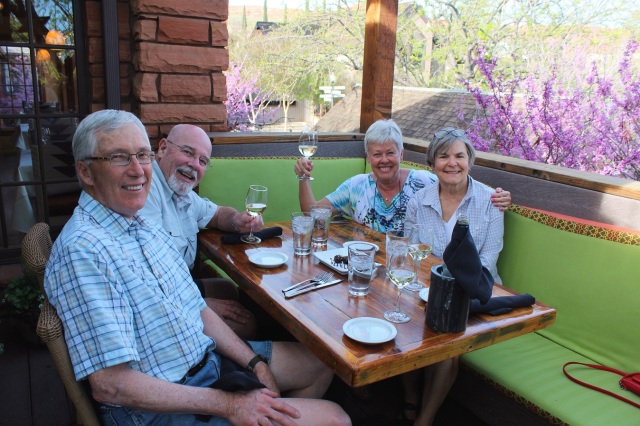 [‘Twas a beautiful evening!  Made even more so by two bottles of crisp and citrusy Nobilo Sauvignon Blanc, much to the enjoyment of the interested parties!]

[The restaurant specialty, as well as the special of the day, was beet salad.  Of the four of us, only Jeanne and I were beet eaters.  I ordered it.  Gorgeous, and delicious!]

[As I recall, Jeanne ordered the spinach salad.  That’s Ken’s bacon wrapped duck on the right.]

[And here are my crab cakes, sans bacon wrap.] 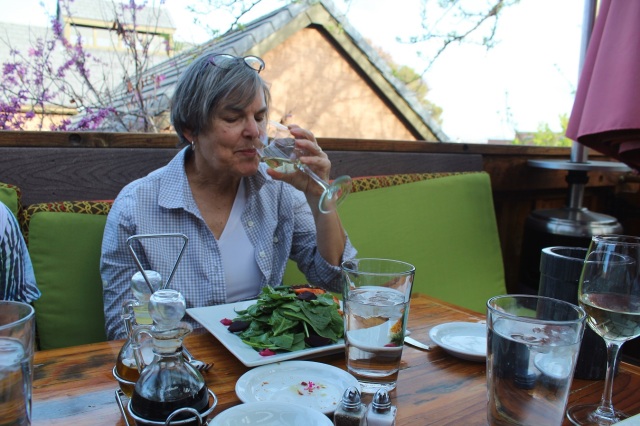 [Jeanne liked the water, too!  😉  So, if you’re ever in St. George, we can all heartily recommend the Painted Pony!  It appears St. George is becoming a less crowded snowbird alternative to Florida, Arizona, and the California desert.]

Up next:  Day Seven.