It all began on a small town basketball court 29 years ago . . .

Saturday night the Cardinals hosted Bemidji in a girl/boy basketball doubleheader.  The girls’ game was particularly significant in that Coach Wendy Kohler was going for her 500th career victory.  So, I began the evening by being late, because . . . our morning meeting ran long, which meant we were late getting the winery for Anthony Miltich, which meant we were late leaving the winery.  Anyway, I always wanted to just video Kohler, particularly in tight games when she’s whistling and shouting instructions.  This game unfortunately (in that regard) was “over” by the time I got there a little before halftime . . .

A couple minutes at the start of the 2nd half: 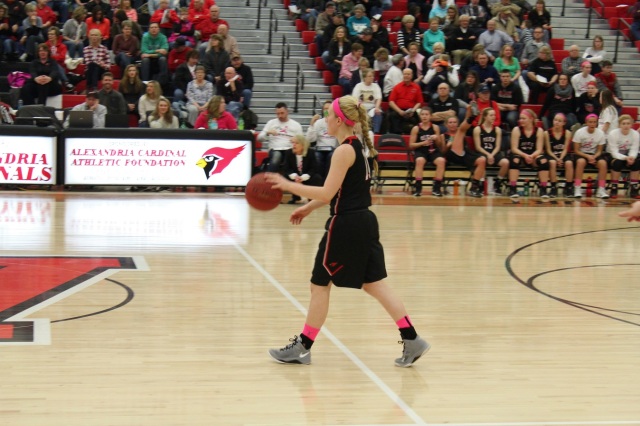 [We began, as all things must, with point guard Macy Hatlestad (11) bringing the ball up court.]

[Then we have the Cards defensive pressure.  The night before the Cards had avenged their opening season loss by beating Detroit Lakes at their place, 54 – 41, with a superior defensive performance.  Though we were physically and emotionally spent from the Laker game, the Lumberjacks are in down year and didn’t offer much resistance.]

[Macy careens out of bounds after a rebound.  Emma Ziegler (1) and Carly Dropik (33) keep the Lumberjacks at bay.] 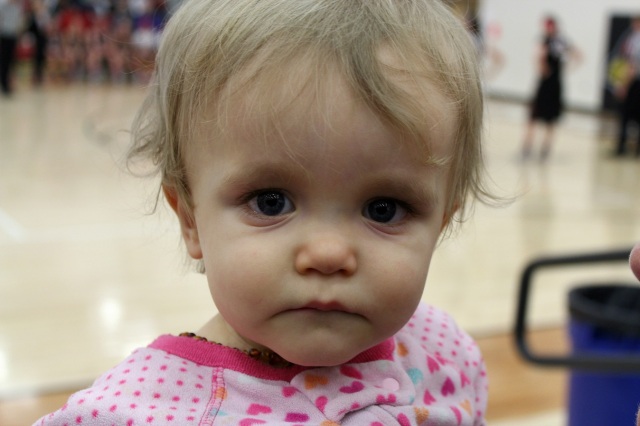 [Then changes directions and goes left.  ‘U’ turns are legal in basketball, no signalling necessary.]

[Despite a big early lead, Kohler was still into it!] 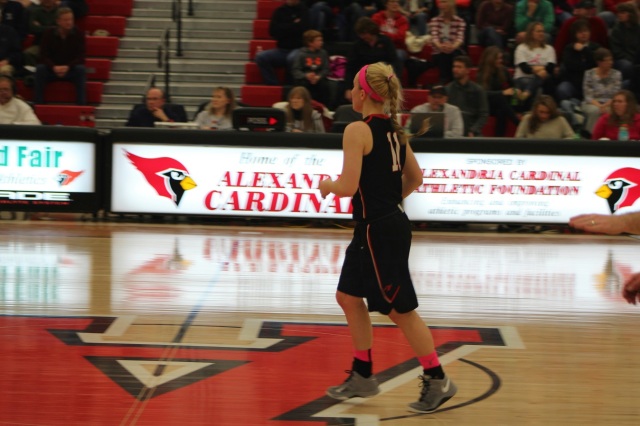 [Carly is our defensive killer bee.] 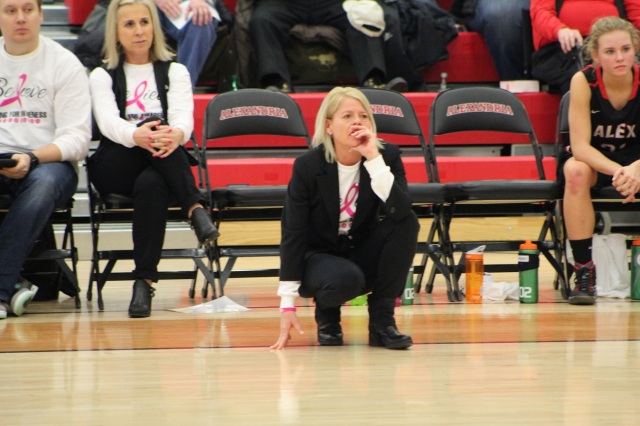 [What am I going to say after the game?]

[Game over, but it’s just the halftime score.] 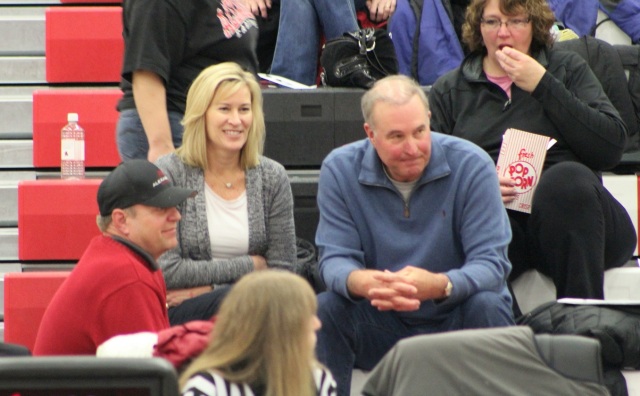 [Known to have a family connection in the following game . . . ]

[As you can see (well, maybe), a chance to play a lot of players.  In my excitement (?), I must have loosened the camera lens just enough to un-focus it.  I lost several of the following “500 victories photos” because of that – drat!]

[Fortunately, I got the focus back here as Kohler addressed the assembled masses.]

Her speech, on loan from the Voice of Alexandria:

[The celebration . . . well, you probably figured that out already.] 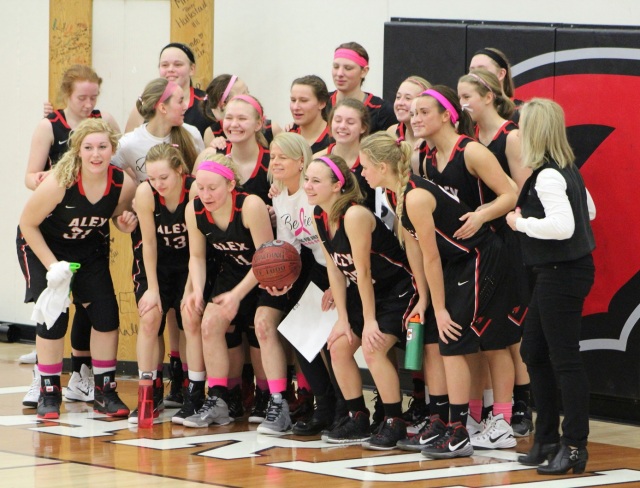 [Ben Corson (13) and Kris Setterstrom (3), senior guards.  Kris had a particularly strong game offensively as he really pushed for his shot.]

[While all appear headed downcourt, Corson heads up court in defiance of the majority traffic.] 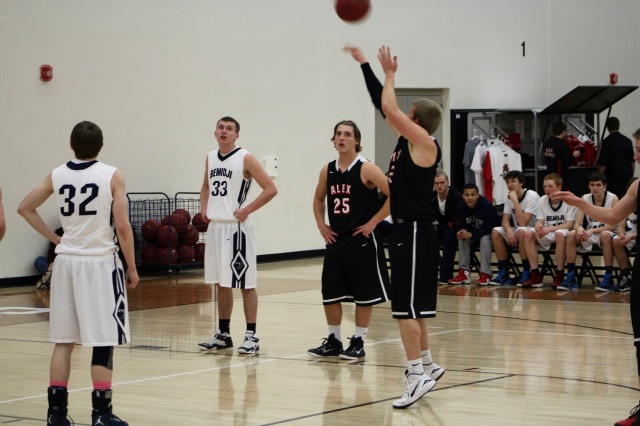 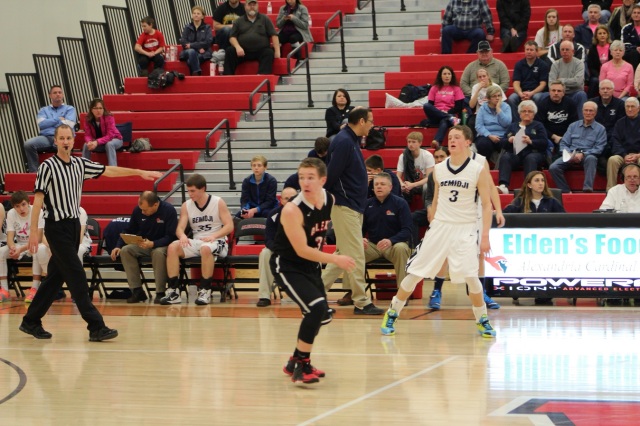 [And Tyler Owen (35) completes our “big guy” triumvirate at the line.] 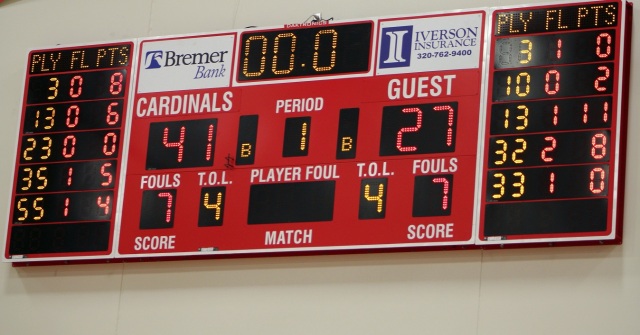 [This game was all but over at the half as well.  I was particularly impressed with the way the Cards distributed (i.e., shared) the ball.  Lots of terrific assists, particularly by Jaran Roste (31), sophomore “point forward”?]

[Grant Toivonen (1) and Wensman on offense.]

[Travis Krueger (25) from the corner.  Travis had a hot hand throughout the game.] 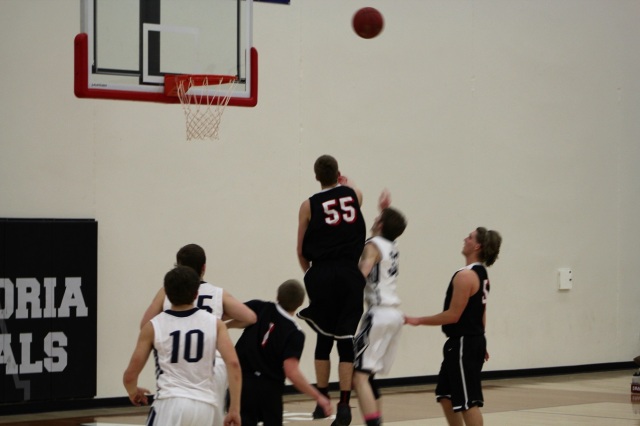 [I do believe I caught a Wensman swat!  I think he must have had 5 or 6 blocks in the game, including two on one sequence.] 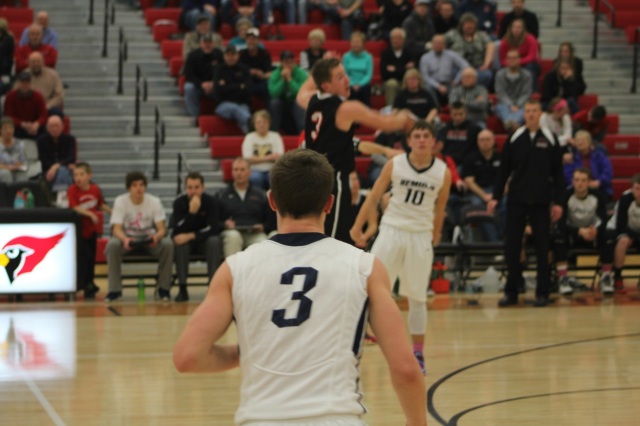 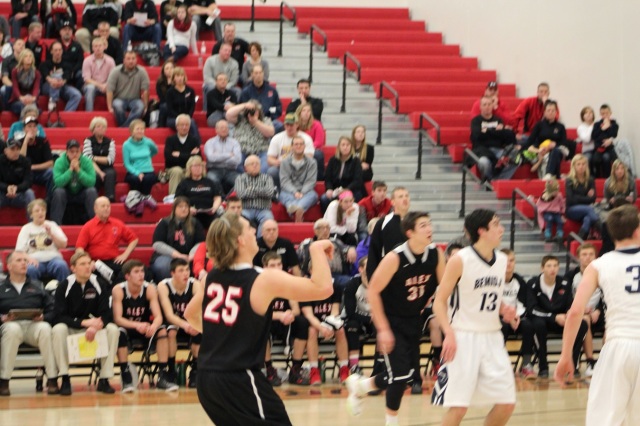 The penalty for censoring what your children may be taught is children who are no brighter than you.  ~  Frank A. Clark

Up next:  An afternoon with Josie