Last Monday and Tuesday, the Cardinals hosted their 402nd (well, it’s been a lot) Annual Girls’ Basketball Holiday Tournament.  The invitees this year were Buffalo, Hutchinson, and Robbinsdale Armstrong (a regular attendee).  Hutchinson and Armstrong played first and, in a portent of things to come, Hutch won in double overtime.  Then the Cards played Buffalo and, not to be outdone by events of the first game, also won in double overtime.  The super and I got a room on the south side of town then rather than risk the long ride home to the north side of town in the wee small hours of the morning!

[We didn’t realize at the time, but we should have asked the two alums, and student manager, from our last state tournament team to suit up.  By the time the game was over, we were running out of players.] 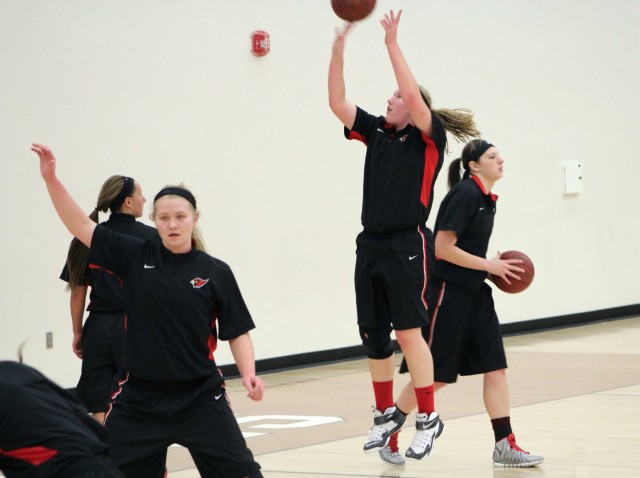 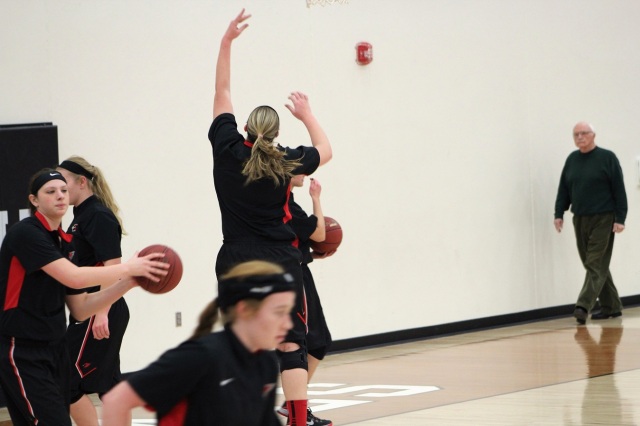 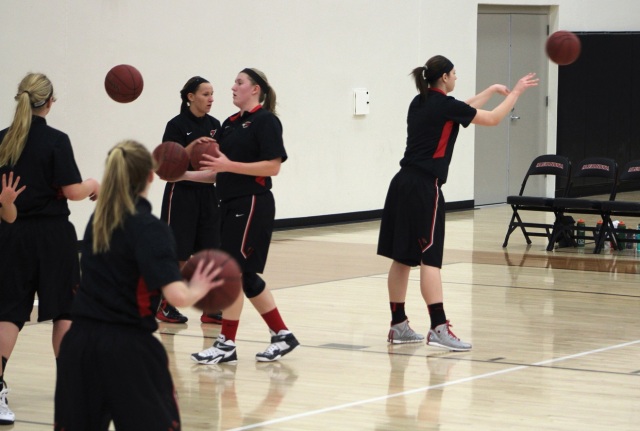 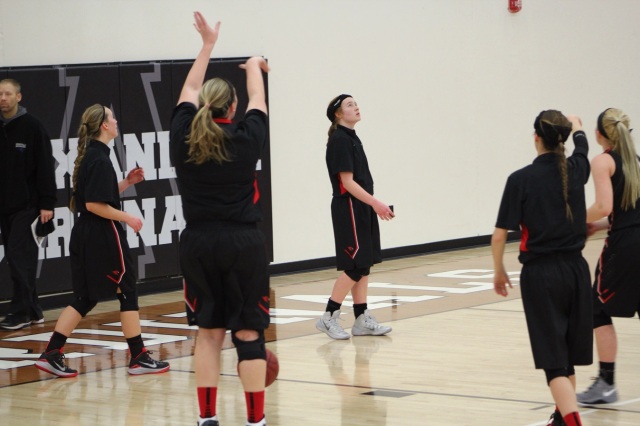 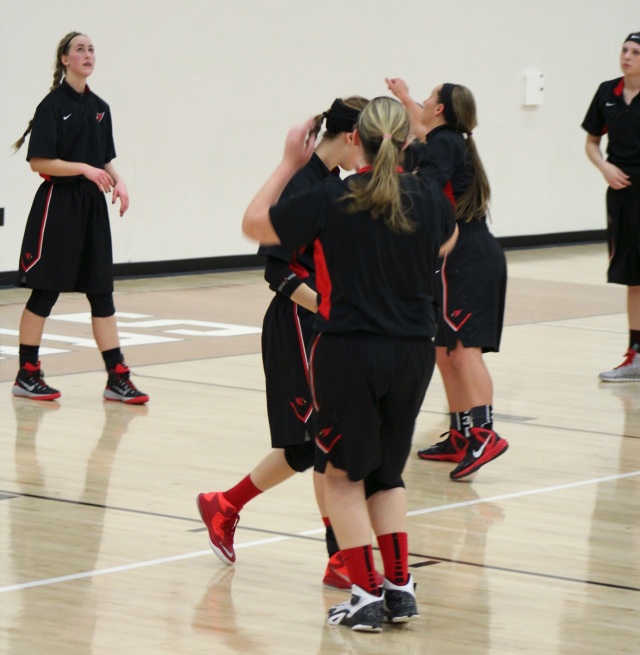 [It seems prescient in hindsight. but my pre-game warm-up player-of-the-game (a new record in the use of hyphens) was senior co-captain, Cheyenne Hendrickson (55).  She would take, and hit, the first ‘3’ I’ve ever seen her attempt to send the game into OT (either the 1st or 2nd, who remembers a week later).]

[The usual pre-game coffee clatch and ‘a cappella’ sing along.  I still have no idea what they chant?  It may be a Gregorian chant . . . or a boy band rap?] 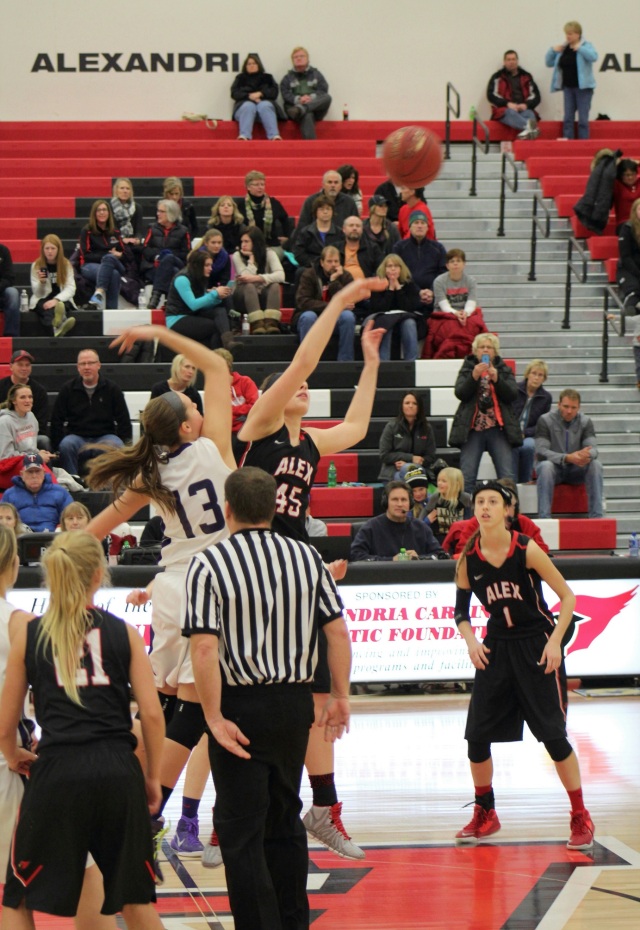 [Brooke (45) won the opening tap, then looked to pass from the high post.  Hers was the only position where we had a height advantage.]

[Macy (11) on ‘D.”  We play much more man-to-man than in the past – likely because we don’t have the overall team wingspan of previous teams to play the 1-3-1 effectively.] 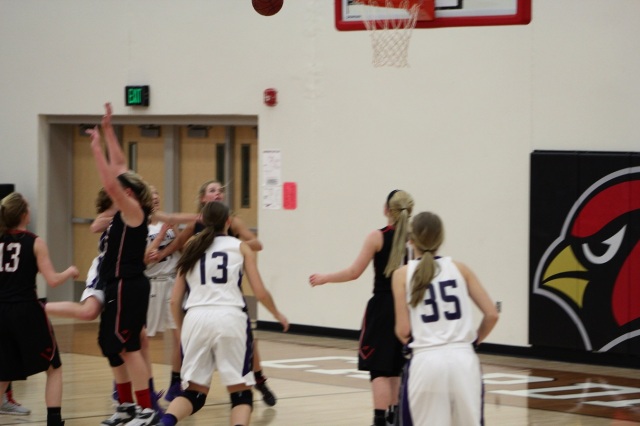 [And man-to-man better sets up block out positions for rebounding.]

[Kelby (13) has a lot of her older sister’s leaping ability which makes her good at the point of the press.] 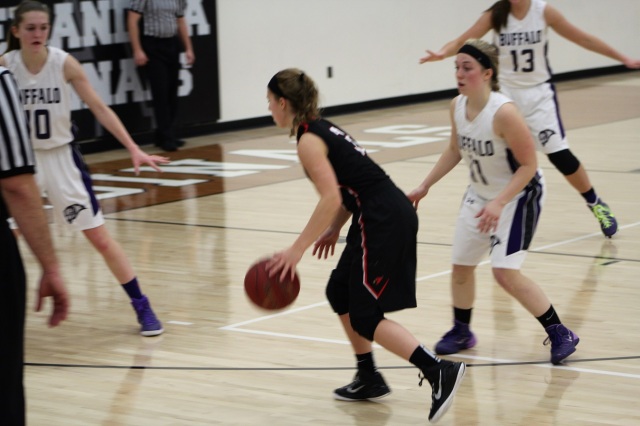 [Kendall (3) looks to penetrate.  Come to think of it, we may have had a height advantage at point guard with their No. 11 (but she was pretty strong and fast).] 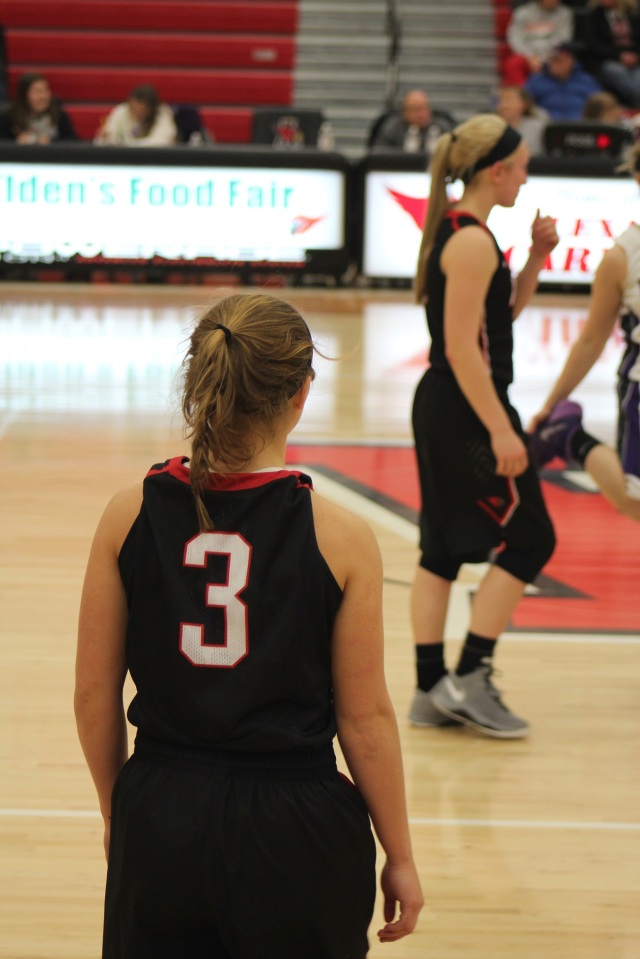 [Macy bringing the ball up (or is it “bringing up the ball”?).  Things were looking great up to about halfway through the 2nd half . . .] 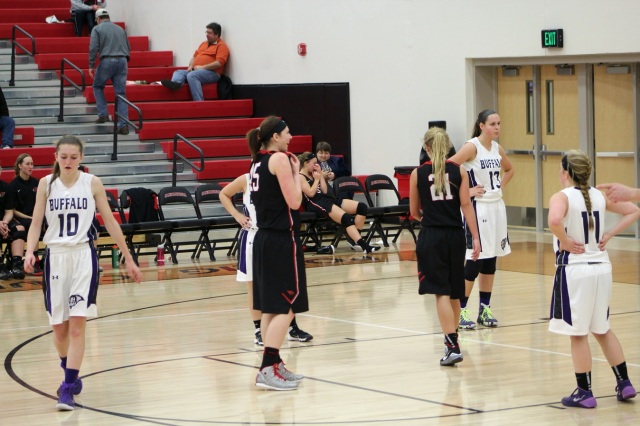 [Then bad things began to happen.  If you look between Brooke and Macy in the photo, you’ll see Kendall on the bench with her right foot raised.  While driving the baseline, she crumbled in pain . . . a sprained ankle, she was out for the game.] 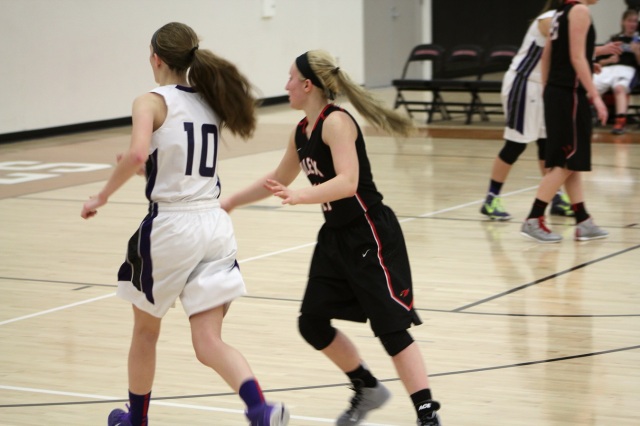 [And then Macy, then Brooke, fouled out – our three leading scorers were out of the game!  Then two more starters fouled out.  Double oy! . . .]

[But if you harken back to last year, you may recall the freshmen team was undefeated (as this year’s frosh are as well) – and that was without Macy and Kendall, who were both playing varsity . . .] 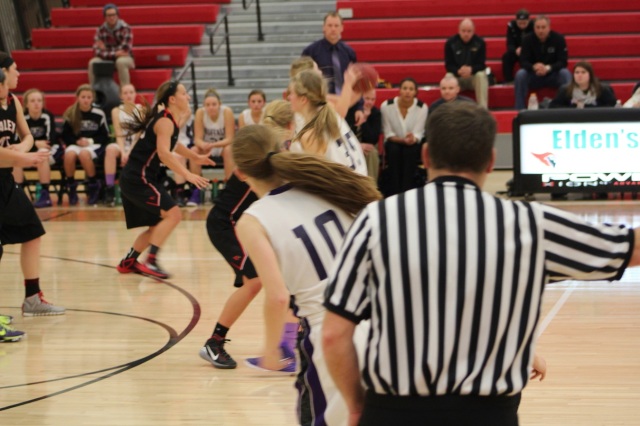 [And the bulk of this year’s varsity, and all of the JV team, are sophomores, i.e., last year’s undefeated freshmen.  It’s what one would call deep depth!  So, our 2nd team played all of both overtimes . . . and pulled it out!  A major woo-woo!] 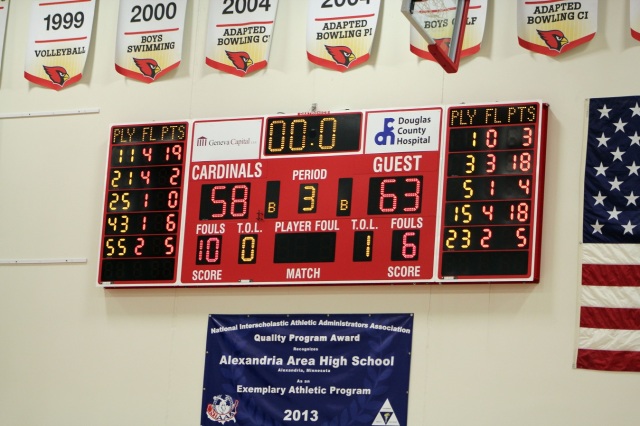 The game the next night against Hutchinson was remarkably similar to the game the night before.  Despite the absence of Kendall, who was in a walking boot (but is expected back for the next game against Brainerd on the 8th), the Cards had a double-digit lead well into the 2nd half.  Then the same thing happened – we just hit a wall and only scored 10 points the rest of the game.  Lesson to be drawn from the two games – gotta find a way to make nice with the referees!  Uffda!  The first game was not fun losing all our players to fouls; in this game Hutch had a 19-point free throw advantage – they made 25 of 32, we made 6 of 11.  This seems really . . . imbalanced?  Amazing we were even able to get it to OT.

[“The Voice” visits with Dave McClurg, who will succeed him as Voice of the Cardinals.] 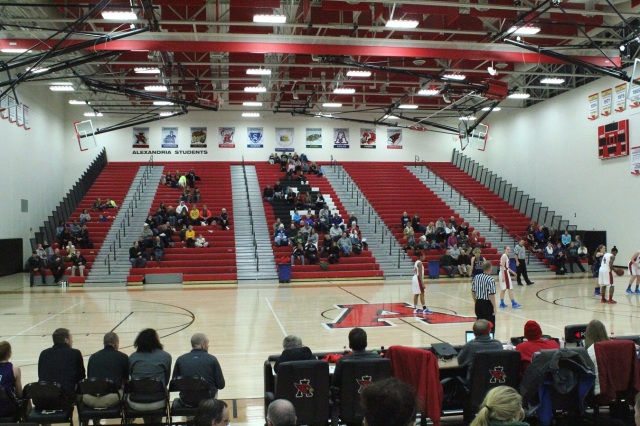 [You will notice we’re on the other side of the gym tonight – behind the benches and the scorer’s table.  Something to do with an end of game video . . .] 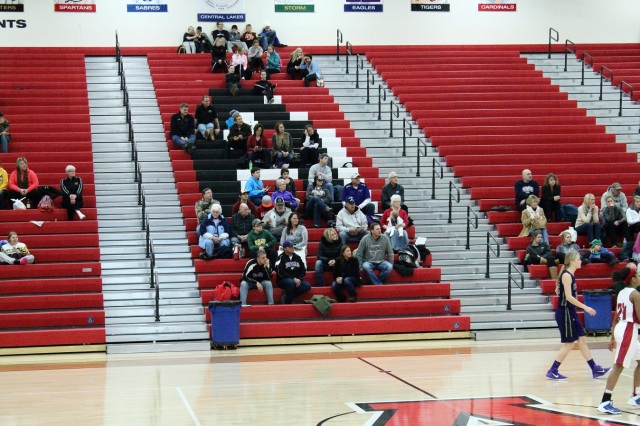 [Where we usually sit.] 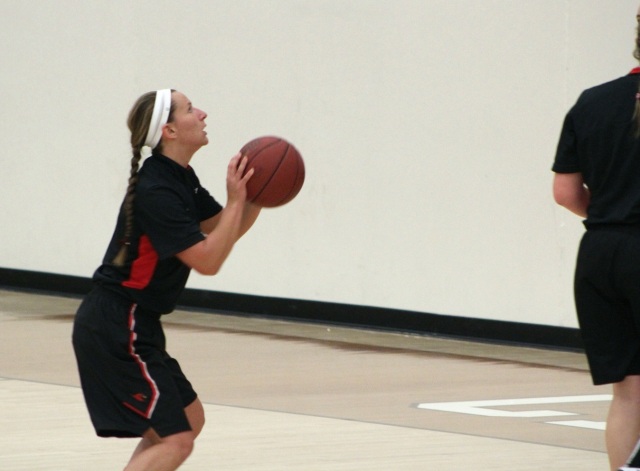 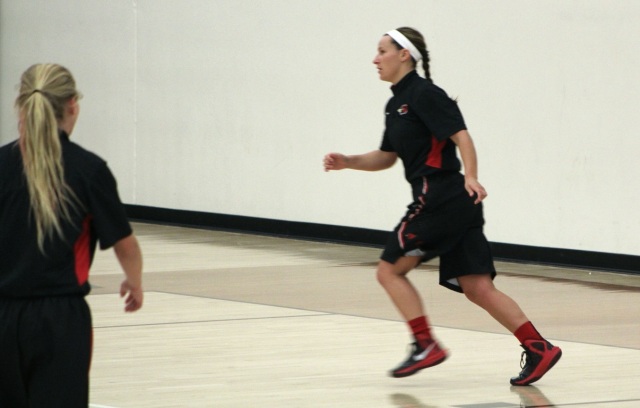 [From the student section, we weren’t as likely to be “raining 3’s” without Kendall.]

[We usually sit with them . . . they all look good from the other side.] 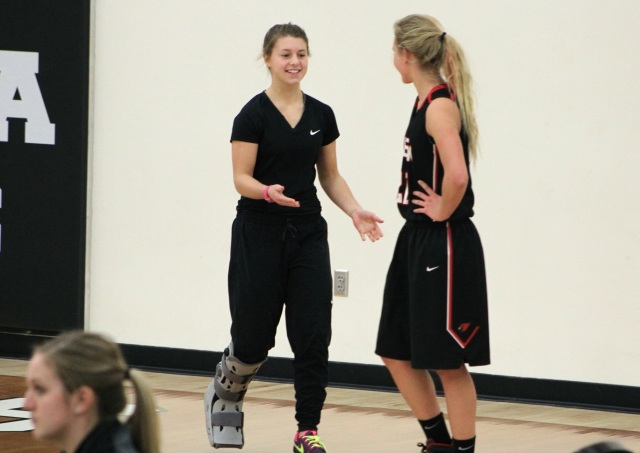 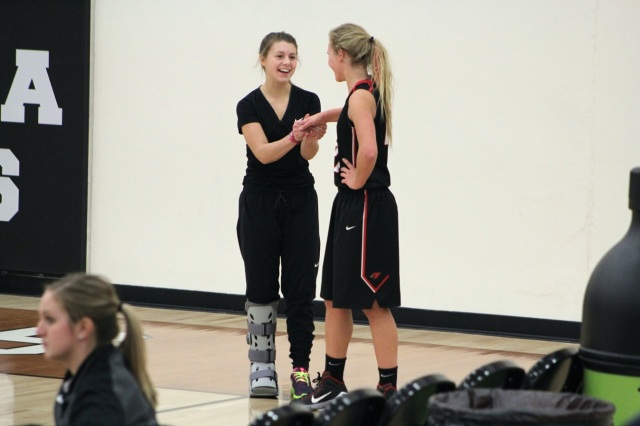 [“The Competition” drops by to say good-bye to “The Voice.”]

[Kendall will be another assistant coach for this game.] 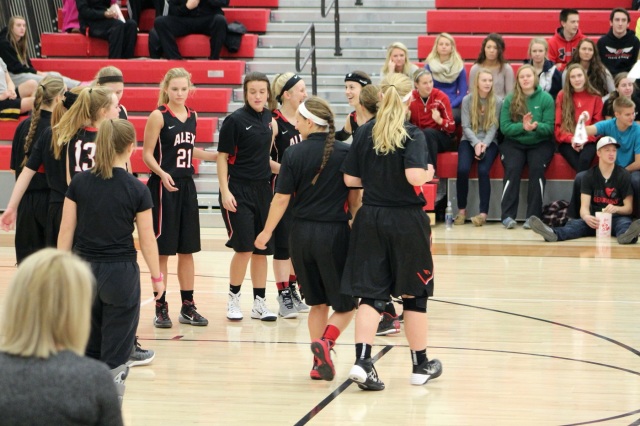 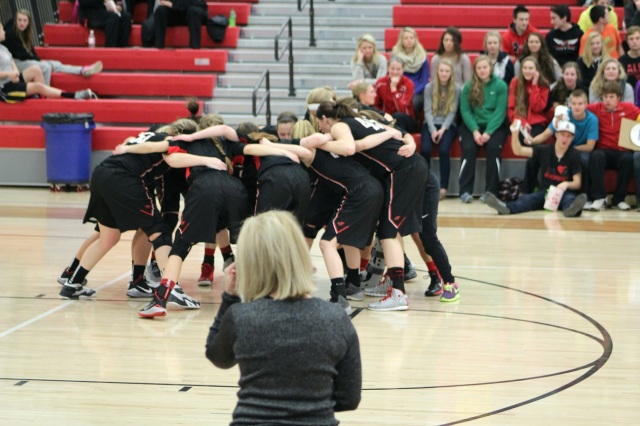 [An advantage of sitting on the bench side is being able to get up close and personal with the huddles.] 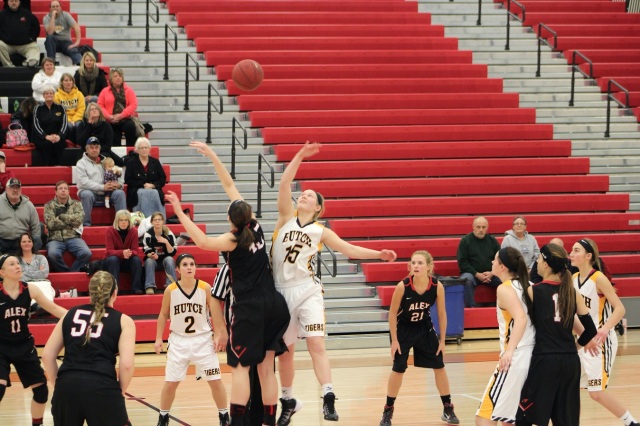 [Sitting with the totally non-partisan Cardinal parents, we came to the totally unbiased conclusion that Hutch’s No. 15 committed about 25 fouls in the game and yet did not foul out.  Good for her if she figured that out.] 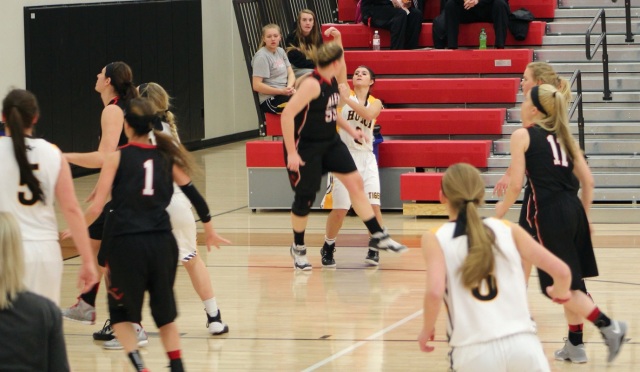 [Hey, we did get some free throws.  And Macy, of course, made them.] 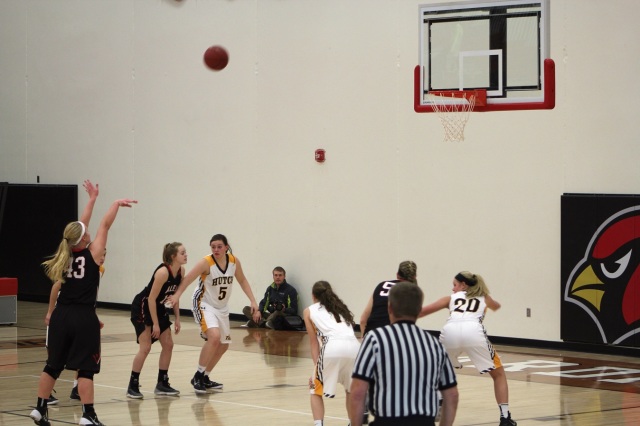 [Just checking to see if she maintained her form from her previous visit.] 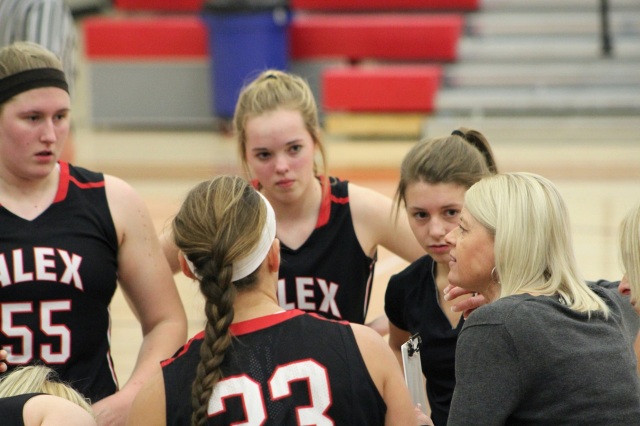 [And this is a family photo from our summer vacation . . .] 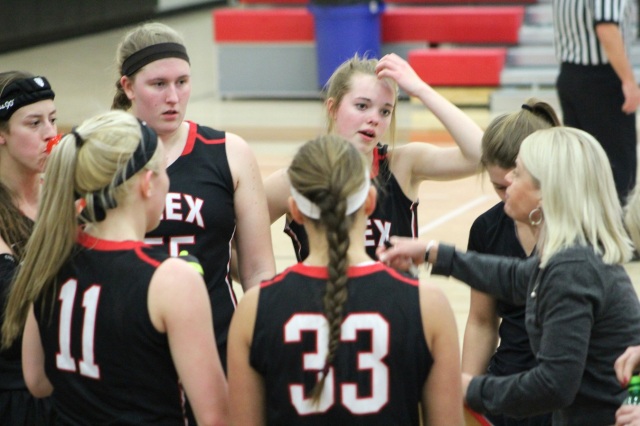 [You put the ball in the basket and prevent them from doing so . . .]

A video at the start of the 2nd half:

[Macy arcs one beyond the reach of my camera.] 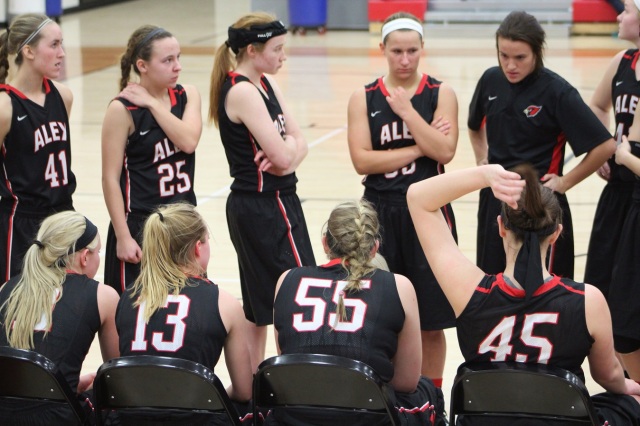 [Winding down in regulation.] 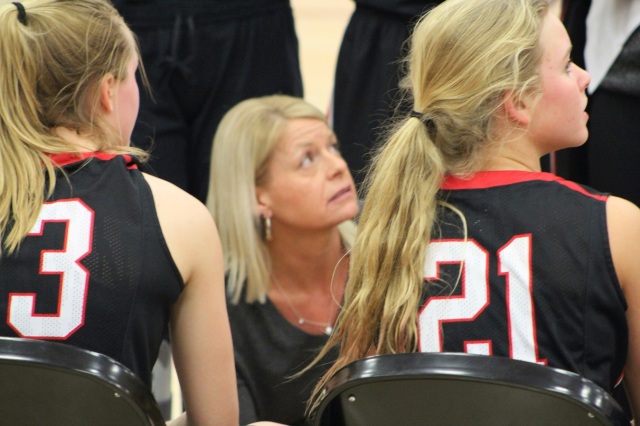 [Kohler is bracketed by Kelby and Kiyana – hey, the Special K’s – while giving last minute instructions.]

[The tip-off to start overtime.  The rest of the game was just watching Hutch shoot free throws.]

A video of Dave Harris’s last game wrap-up, after 48 years of broadcasting Cardinal sports.  Of course, the audio quality is terrible with all the background noise, but I gave it the good ole high school try.  Here Dave interviews Coach Kohler and then Emma Ziegler, as-player of-the-game:

I will not meet you at the pier, as it will probably be chilly.  ~  Anton Chekhov to Olga Knipper

Up next:  Probably the next posting.