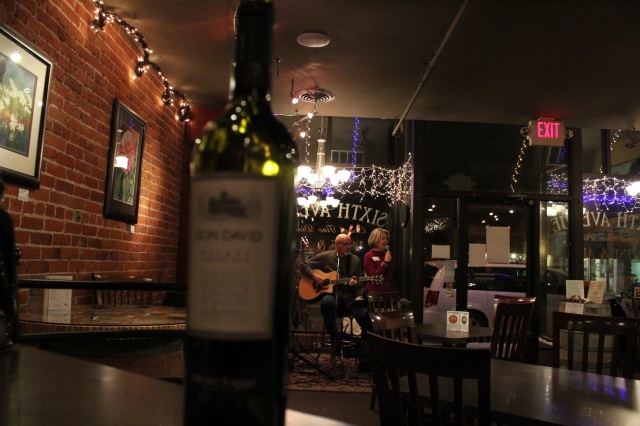 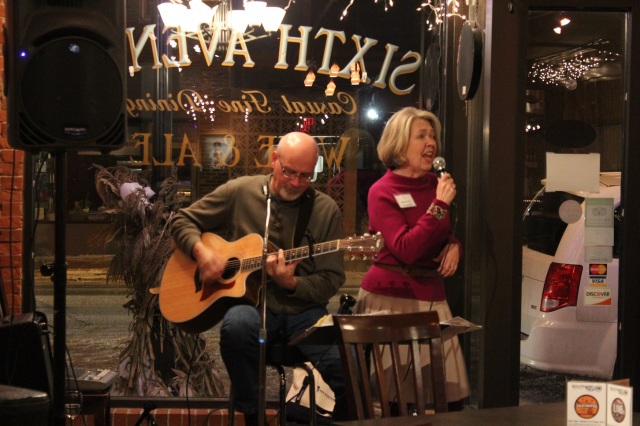 [Erik Schultz was flying solo at SAWA on Thursday night . . . but when he spotted a former member of the Hotdishes in the audience, he had to invite Mary Lou Thunselle up to join him in a song.  🙂  ]

[The Competition beat us to the game Friday night.  Of course, at my age and girth I ain’t climbing up one of those things anyway!] 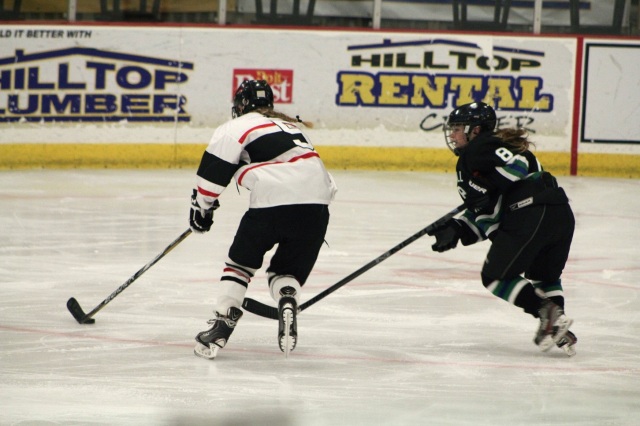 [Jade Bollman (9), sophomore forward, also a legacy whose older sister was a Card.] 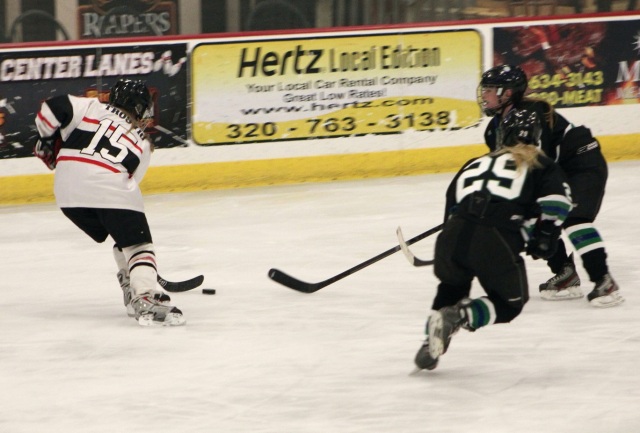 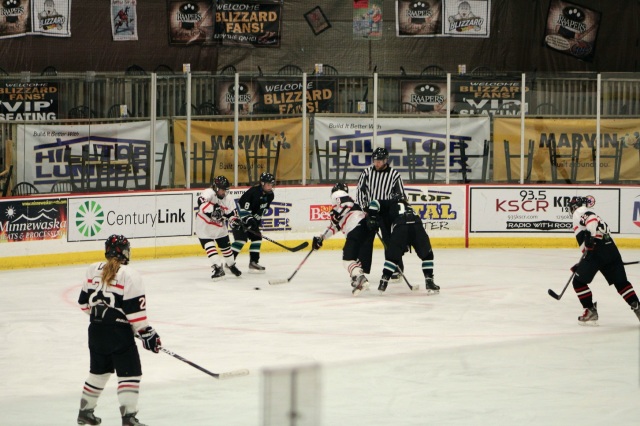 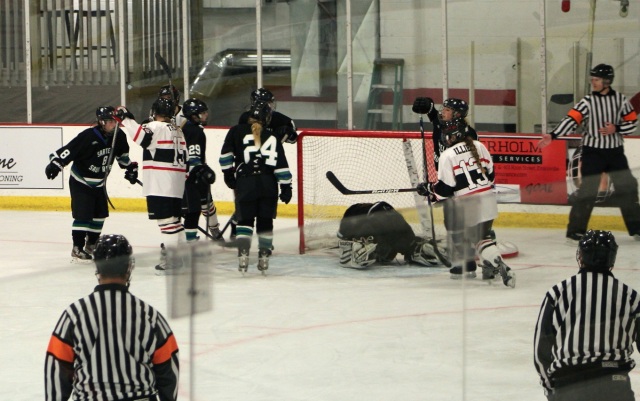 [Ms. Trosvig scored near the end of the game, with Kaia Illies (13), sophomore wing, but the JVers absorbed their first loss, 3 – 1.]

[Warming up before the varsity game, Allison O’Kane (36), freshman defense.]

[Can you name this shooter?] 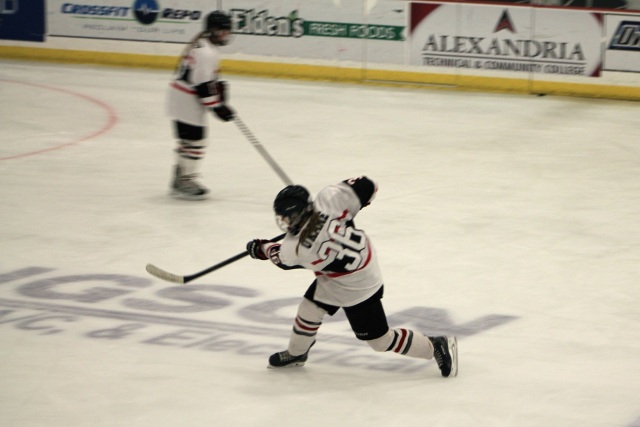 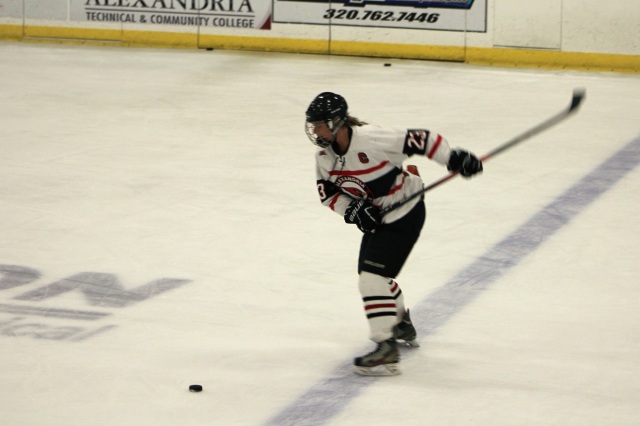 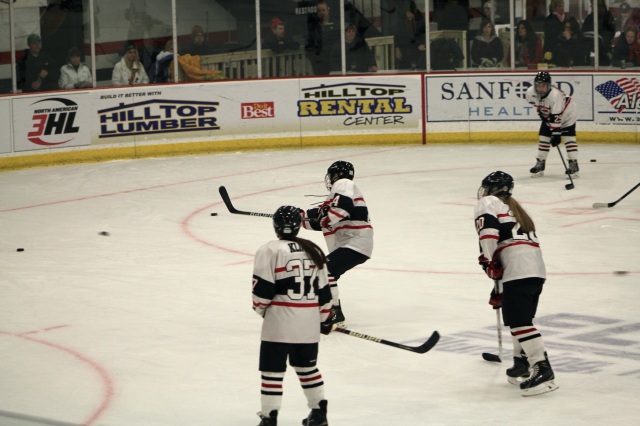 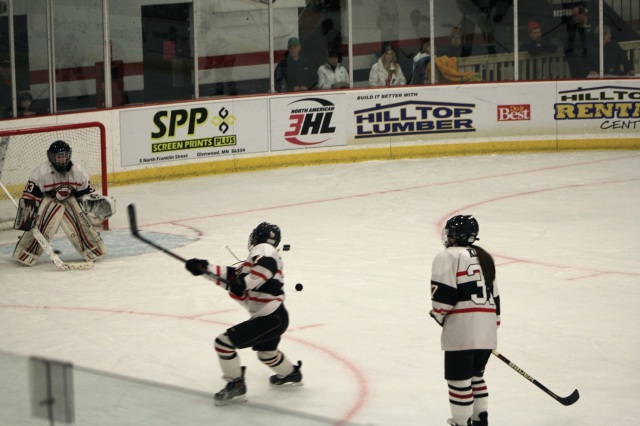 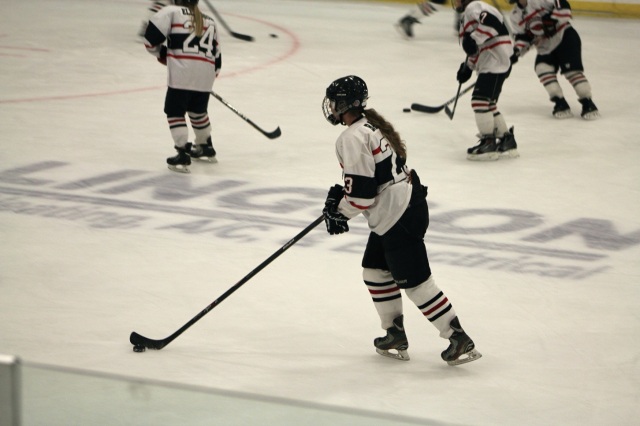 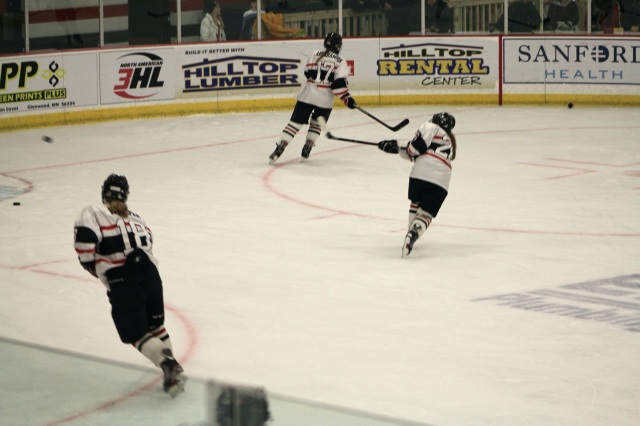 [Rapid fire warm-ups.  A chance to show off the ole high, hard shot!] 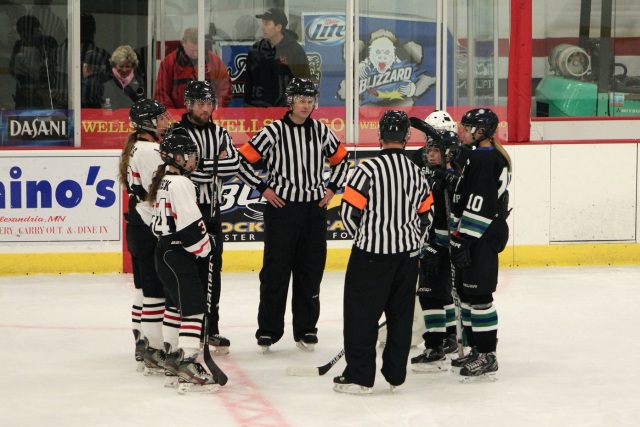 [So, who are these guys?  Well, this would be our first conference game, and our 4th game of the year against all class AA teams.  The Stormin’ Sabres are the defending conference champs (11 – 1 last year), and they were returning a lot of those players . . . big players!  This would be a real test for our mighty mites.] 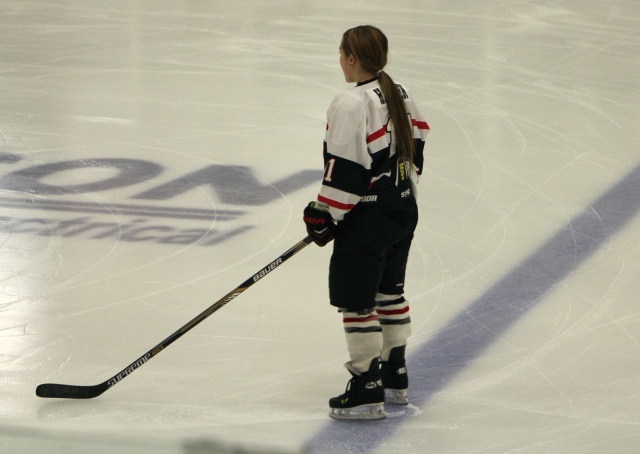 [Coach threw us a curve ball here.  I wasn’t going to shoot player intros here because I already had in the 1st two home games.  But this time he started Hanah Hansen’s line, showing we don’t really designate 1st, 2nd, or 3rd lines because they all play.  So I missed Hanah until she had turned to greet her teammates.] 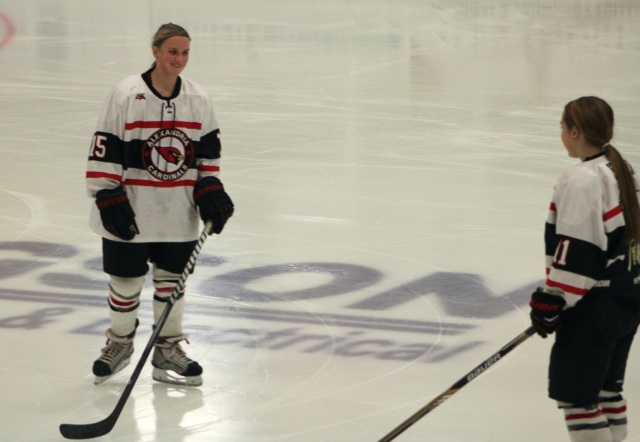 [Kristin, all ready to go after a period with the JV’s.] 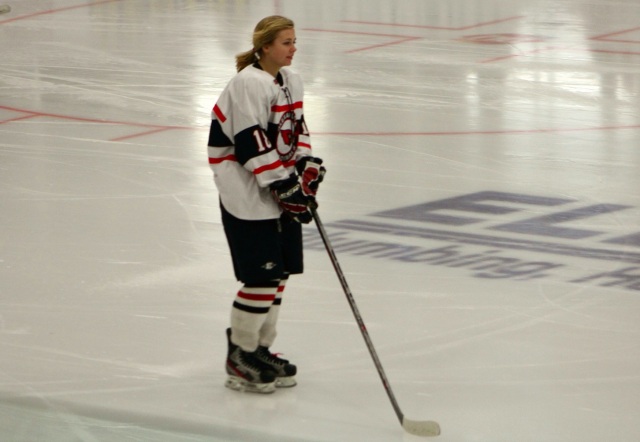 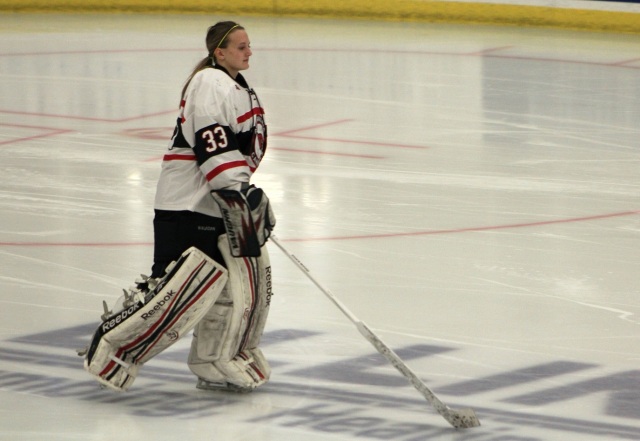 [Mari turned the Anthem duties back to Super Fan Roger Riley.  And for this game, at Super Fan urging  (ha!), finally made its season debut over the PA system.] 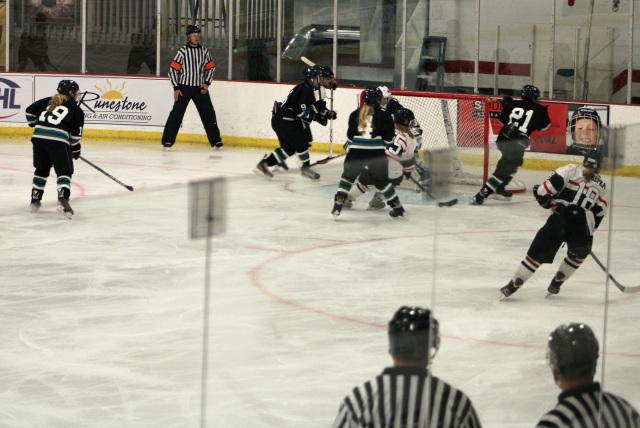 [Kristin and Mari in on goal.] 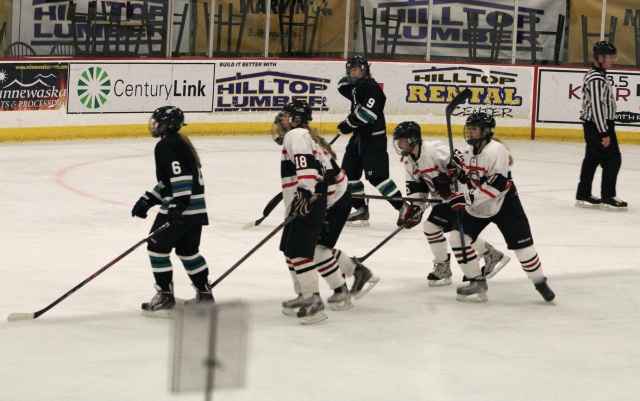 [Asleep at the switch, I missed Nicole’s 1st period goal here.  She deked a couple of defenders and fired a nice wrister from about 15 feet out.]

[The Cards swarmed like bees that first period and had the Stormin’ Sabres on their heels.  I think they called a time-out then to slow our momentum.] 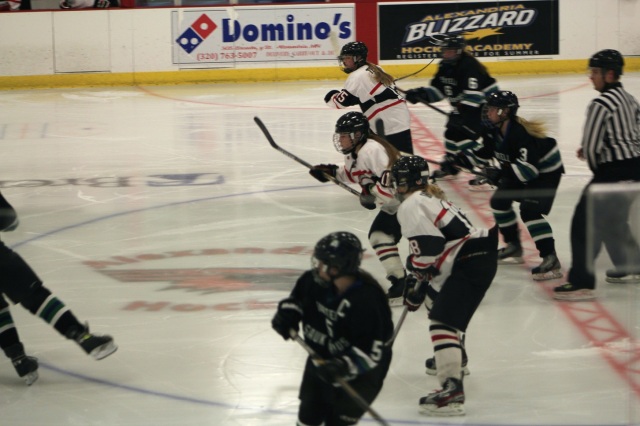 [Hanah’s line at the start of the 2nd period.  The Stormin’ Sabres can claim this period in which they tied the score.]

[Memories of their years together as defense partners, Lauren Niska (21), junior, and McKenzie Revering (29), sophomore, are now learning to play forward together.] 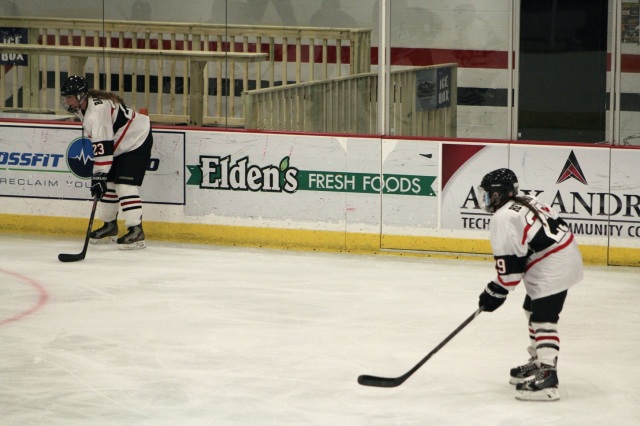 [But on the power play, Little Rev will drop back to her familiar position at the point with Nicole.] 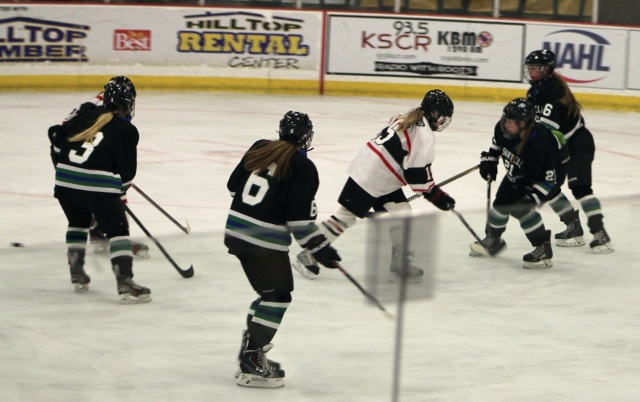 [I thought the Cards controlled the 3rd.  Pretty impressive with two 8th-graders and two freshmen in the rotation against a “veteran” team.  I think our speed, with 3 lines, wore them down a bit.] 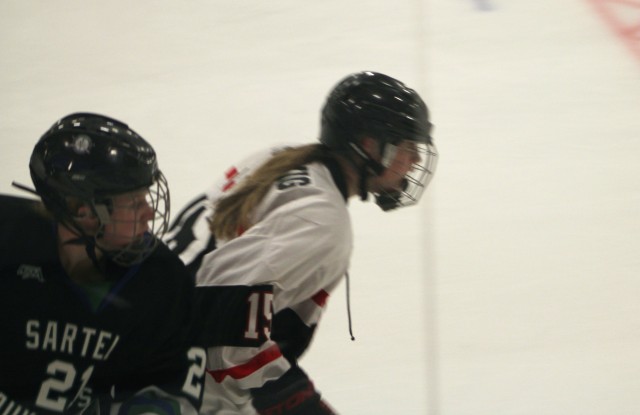 [Kristin here, but McKenzie came oh so close twice to winning the game.]

[With momentum on our side, we had to kill a penalty for the last minute of OT.  The game ends in a tie if neither team scores in overtime.  All-in-all, I thought another good game for the Cards . . . they’re really building expectations as the season progresses.  🙂   ] 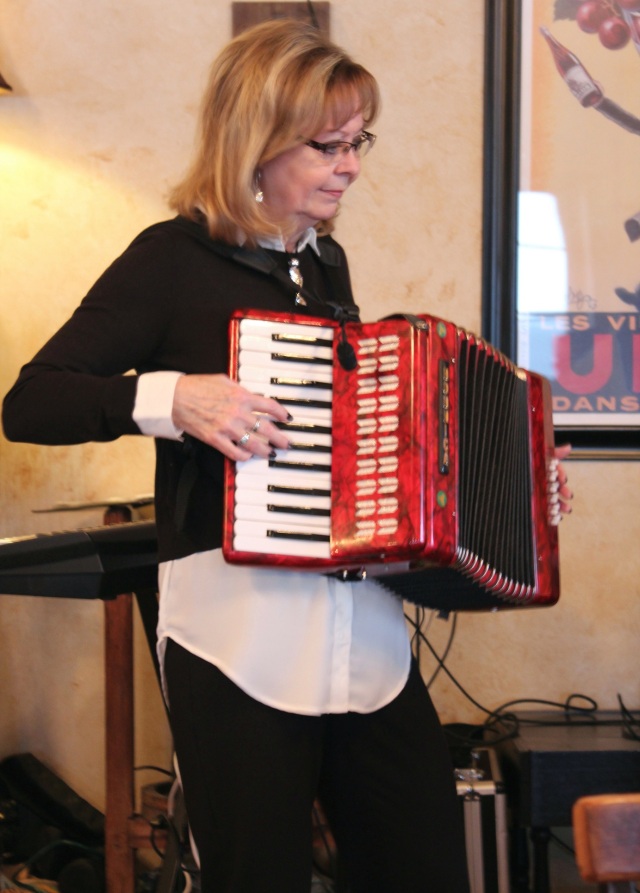 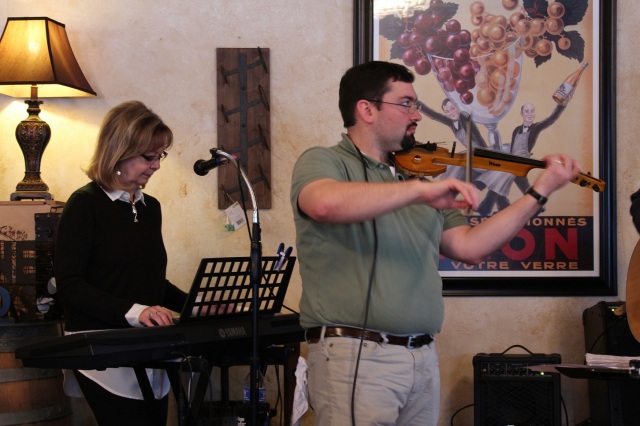 [The super always posts a “Missing you at . . .” missive on Facebook.  This time for the Salty Dogs of Annie, Greg, Erik, and Tom, once again reminding us of our terrific local talent.  🙂   ]

Meanwhile, back at beautiful Lake Darling . . . 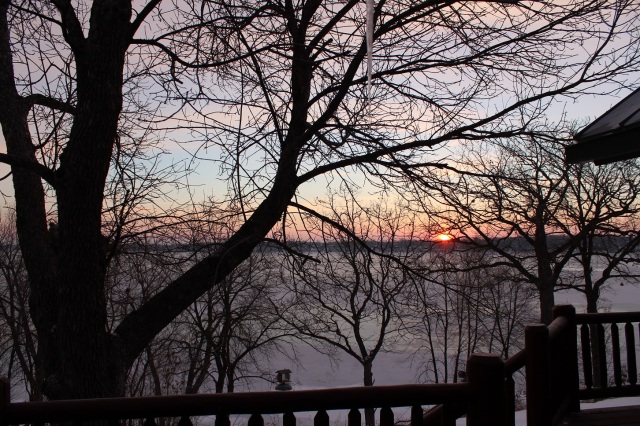 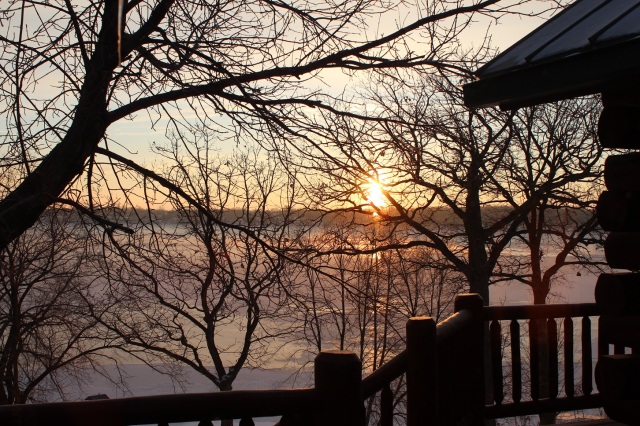 [Sunday sunrise, with two eagles back in our tree, temperature one degree below zero.] 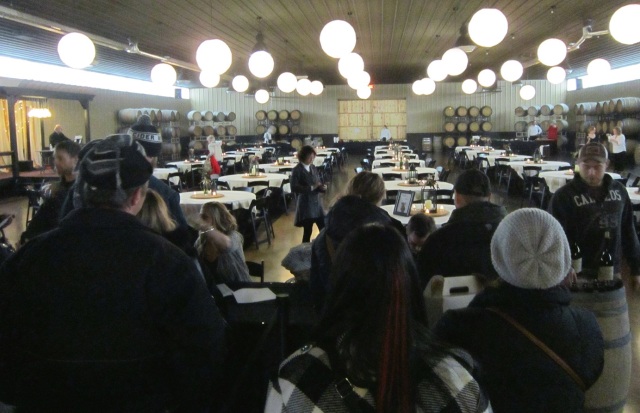 [Sunday afternoon for a lovely wine club pick up and soiree!  🙂  ]

As soon as someone is identified as an unsung hero, he no longer is.  ~  George Carlin

Up next:  Whatever will be, will be.