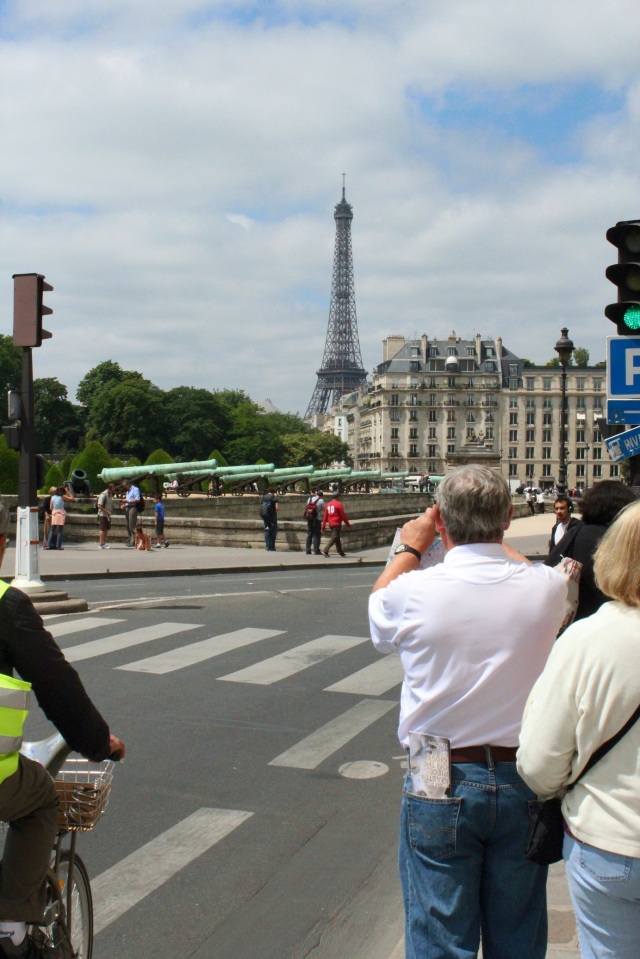 [We’ve left the Rodin.  Bill uses his sextant to plot our new course, getting his bearings from the Tower, of course.  Uffda!!  (That’s Norwegian-French for forgetfulness.)  I forgot to mention that Kay and Elizabeth went home on this morning.  After tearful good-byes over lattes and cognacs, the Magnificent Seven was now the Fab Five.]

[The Army Museum (Musee de l’ Armee) and Les Invalides – remember we went here our first day to pick up our Paris Pass (admission to all museums).]

[I have reason to suspect this is the British Embassy.] 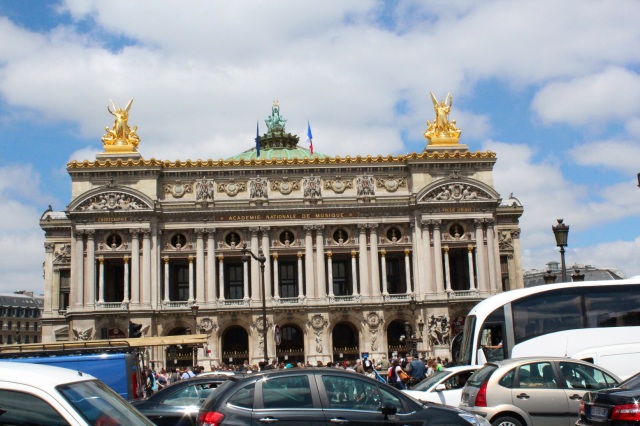 [Wouldn’t swear to it, but this and the photo below are different angles on the Opera House?] 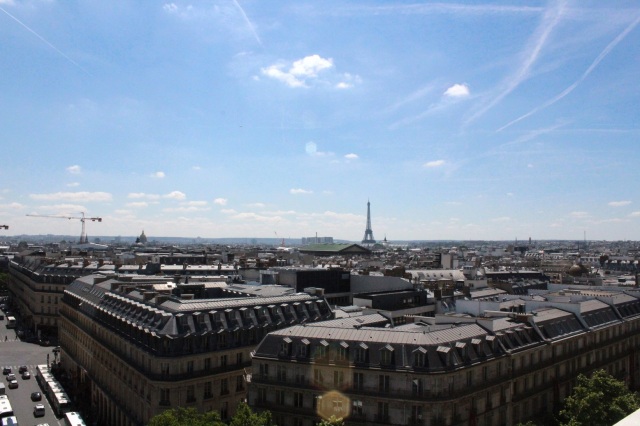 [One of the supervisor’s favorite places.  She has fond memories from a previous visit many years ago.  Because it involves shopping!  😉  We’re shooting from the roof of the Galleries Lafayette, the Paris equivalent of Macy’s in New York City.] 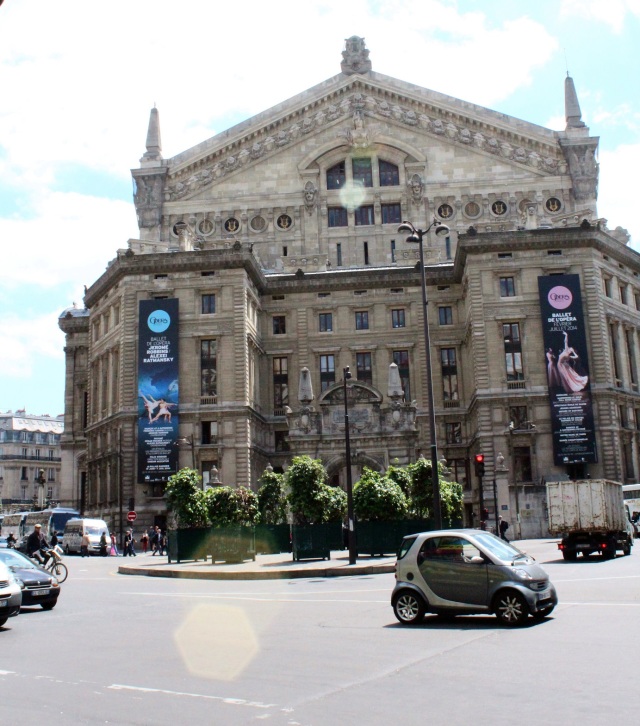 [Which makes me wonder if this photo is out of order because it’s on street level?  You may think it’s just another photo of the Paris Opera House , but actually it’s featuring the Smart Car.  😉 ]

[Meanwhile, back on the roof of the Lafayette, photo number 247 of the Eiffel Tower.] 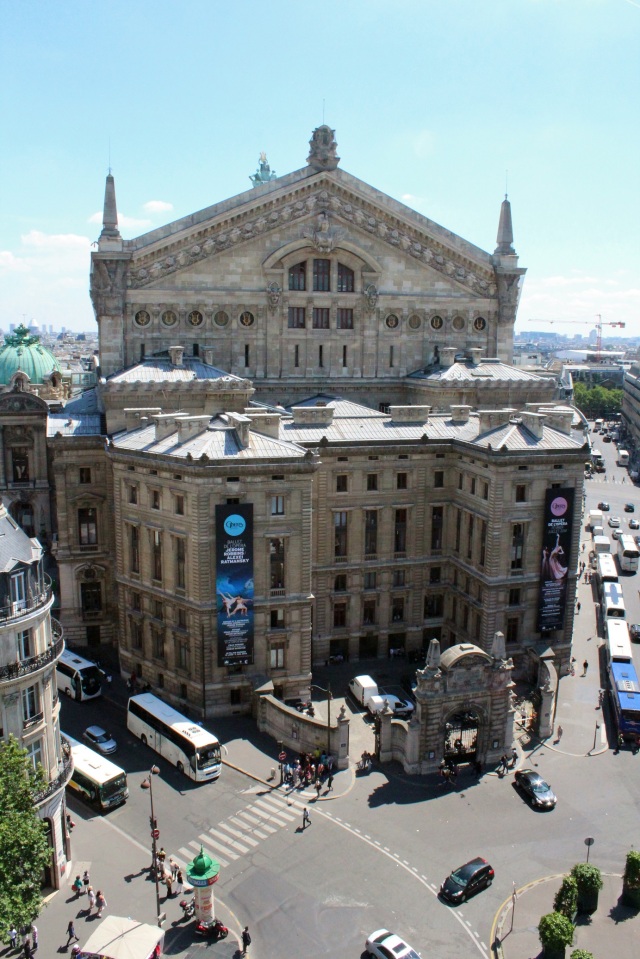 [While the ladies shopped, I escaped to this rooftop setting where artificial turf provides a picnicy setting.] 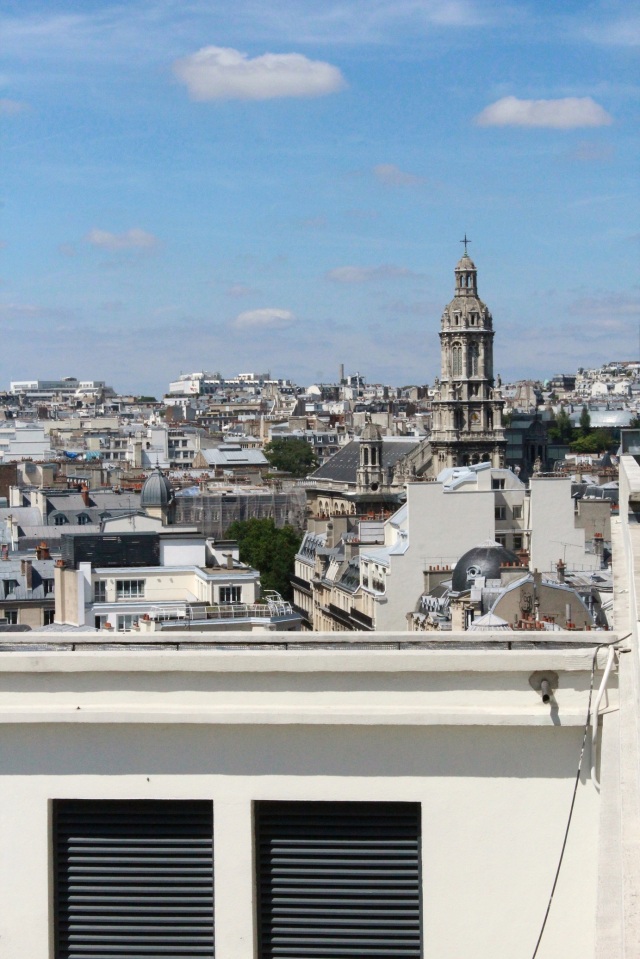 [A rooftop view opposite the Opera House.] 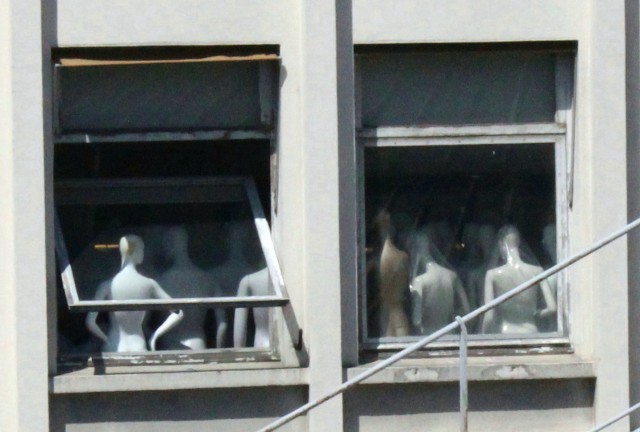 [There’s a story to the domed roof and some day I may look it up.  What I did find surprising is that this store is the 2nd biggest tourist attraction in Paris after the Eiffel Tower?]

[And we’re back around to the Tower.]

[And with shopping complete, The Biddies have rejoined us topside!  😉  ] 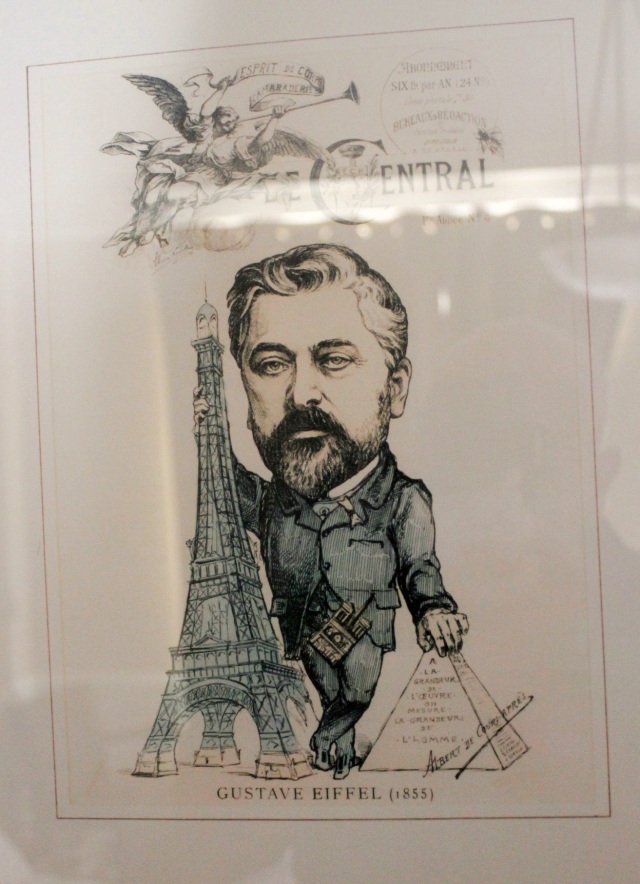 [On the road, errr subway, again to Musee d’Orsay.] 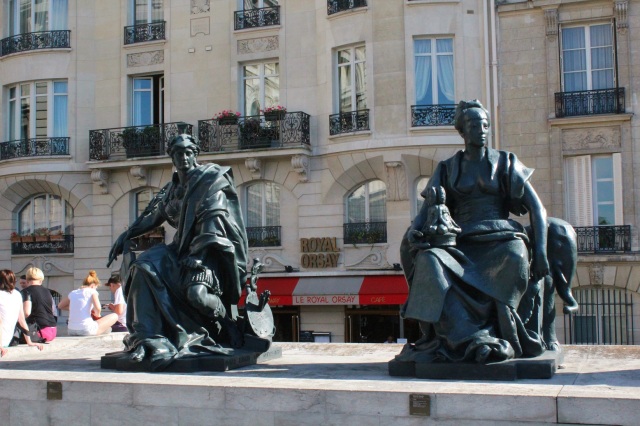 [On its plaza, a restaurant of the same name across the street.  We did not partake of the restaurant.] 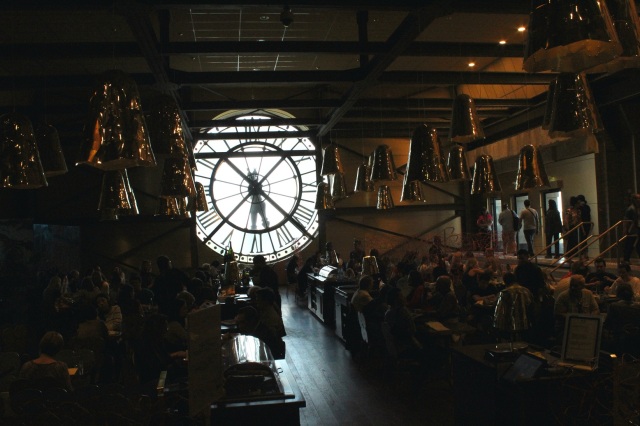 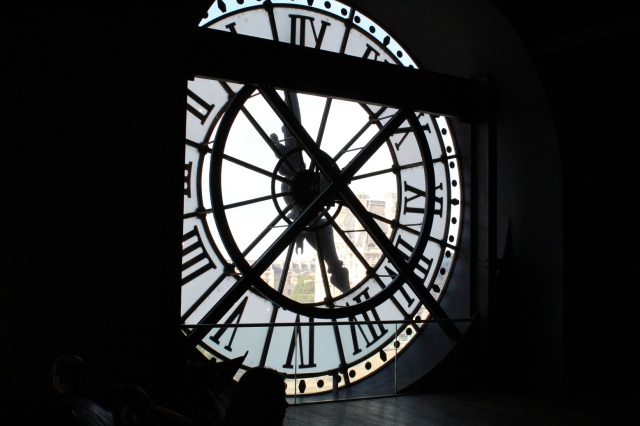 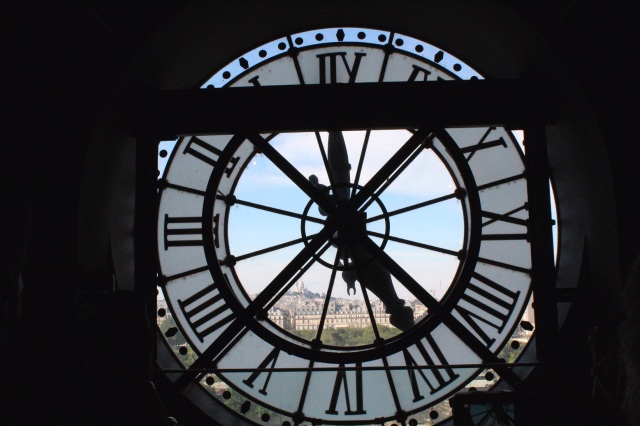 [Views from the anteroom before entering the museum. The Orsay has marvelous art (you could spend a day in here) but unlike any other place we had been, no photography was allowed inside.  Nevertheless, I saw many people taking photos, some were reprimanded by staff but they couldn’t cover everyone.  I obeyed the rules because I did not want another black mark in my NSA files.] 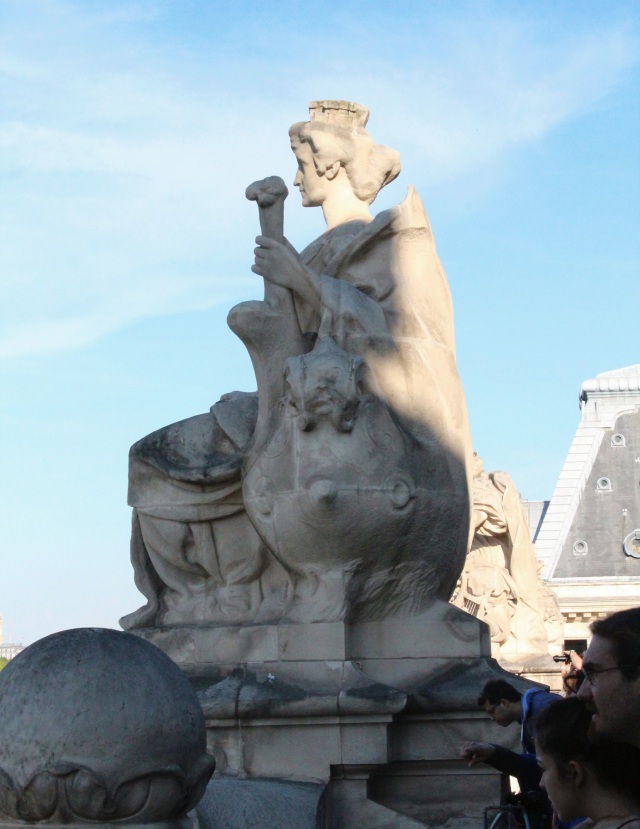 [Shooting through the statuary . . .] 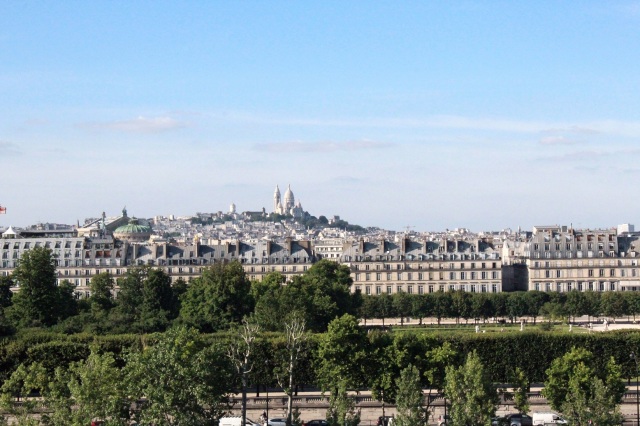 [And across the river to Mont Martre.]

[The Biddies line up their shots.]

[And back to the exterior statuary.] 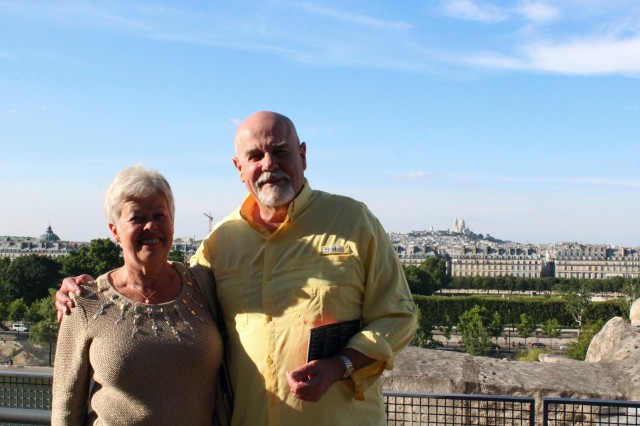 [Tourists who generally tried to behave themselves, with Mont Martre in the background.] 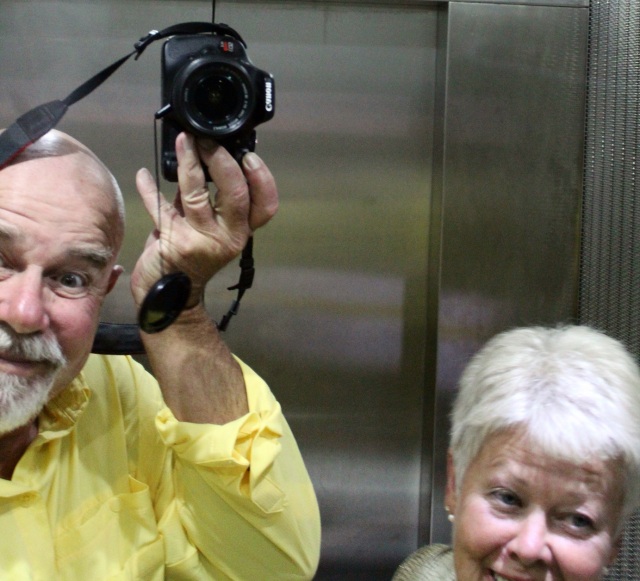 [Back outside on plaza.] 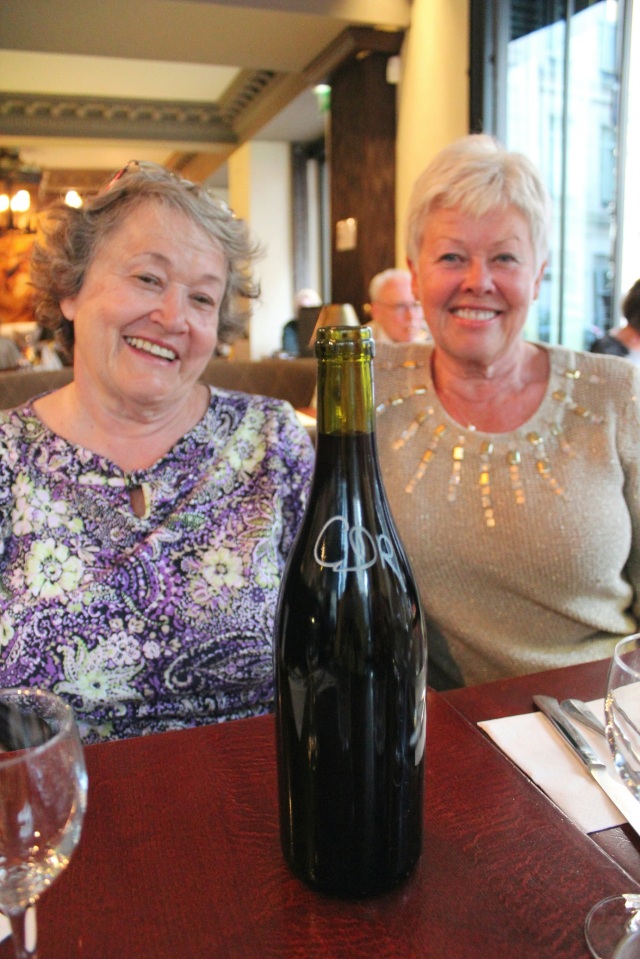 [The Biddies decided it was time for a cool down.  As I recall, it was on this day that Reetz located an Air Canada office downtown and boldly went where no woman had gone before.  This was an executive office, not a place for customer complaints, but Reetz was not to be deterred.  She was finally granted access to some executive where she explained the plight of her lost luggage.  They offered promises to placate her at the moment – those promises ultimately were not kept.  She was finally re-united with her luggage a week after she got home.]

[It’s been so long I have no recollection of this place?  Ha!] 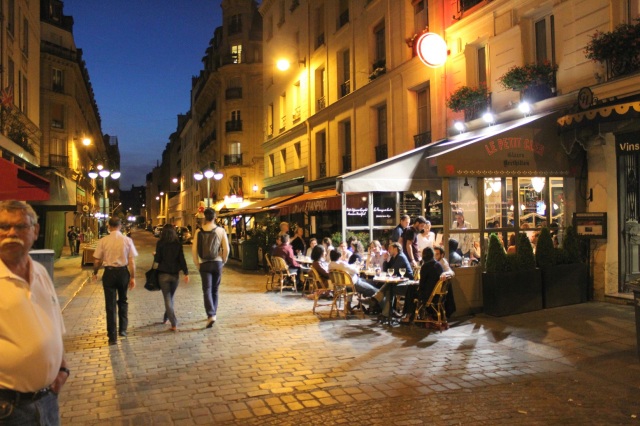 [The Biddies delight in the atmosphere.  I believe this was a night of the World Cup, and the restaurants were full of boisterous fans!]

Next up:  Whatever comes next.