All but one man died, There at Rhone River, And they say he ran away … Stranded! Marked with a coward’s shame. What do you do when you’re stranded, Will you fight for your name? He was innocent, Not a charge was true, But the world will never know … Stranded! Scorned as the one who ran. What do you do when you’re stranded, And you know you’re a man? And wherever you go for the rest of your life You must prove … You’re a man!

Moored at the river bank.  We initially thought this was an unknown landing area where our dead-in-the-water boat had drifted.  Apparently this was a planned docking area for the boat limping along on one generator.  At the time, we had no idea how long we would be here. 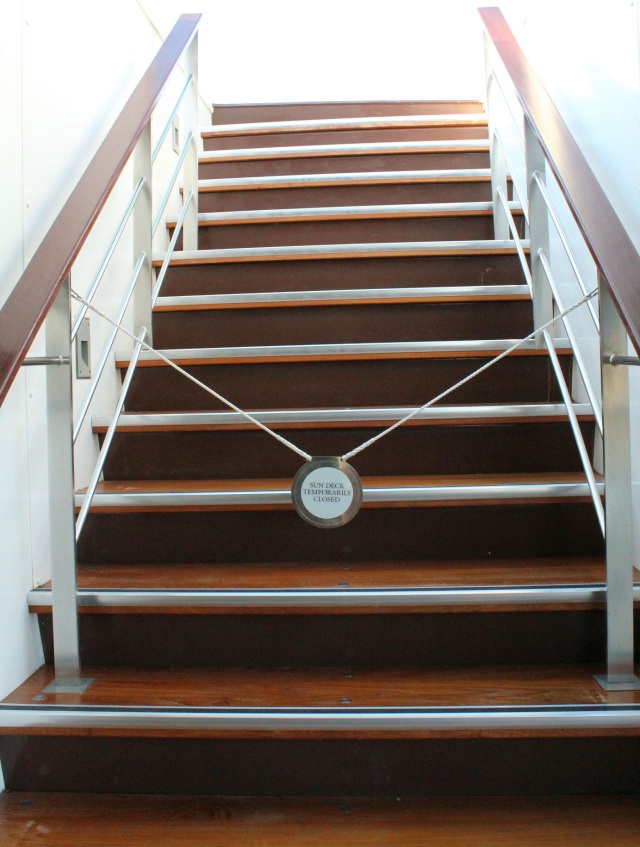 [For they didn’t know when we would again be on our way.  And for that reason, early on we could not leave the boat in case necessary repairs could be accomplished in short order.]

[Ultimately, it was decided we could leave the boat to walk around the small village where we were parked . . .] 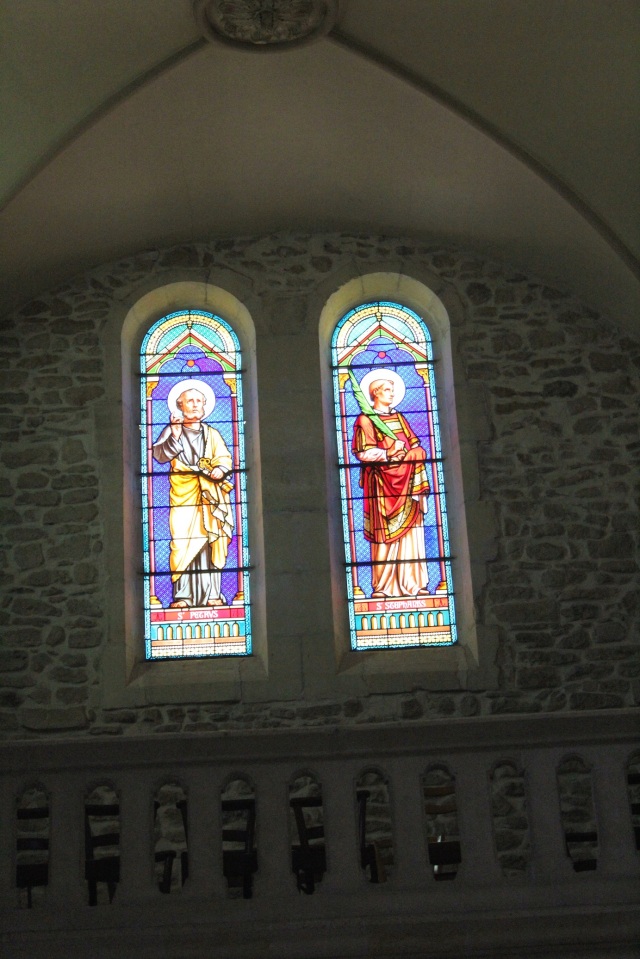 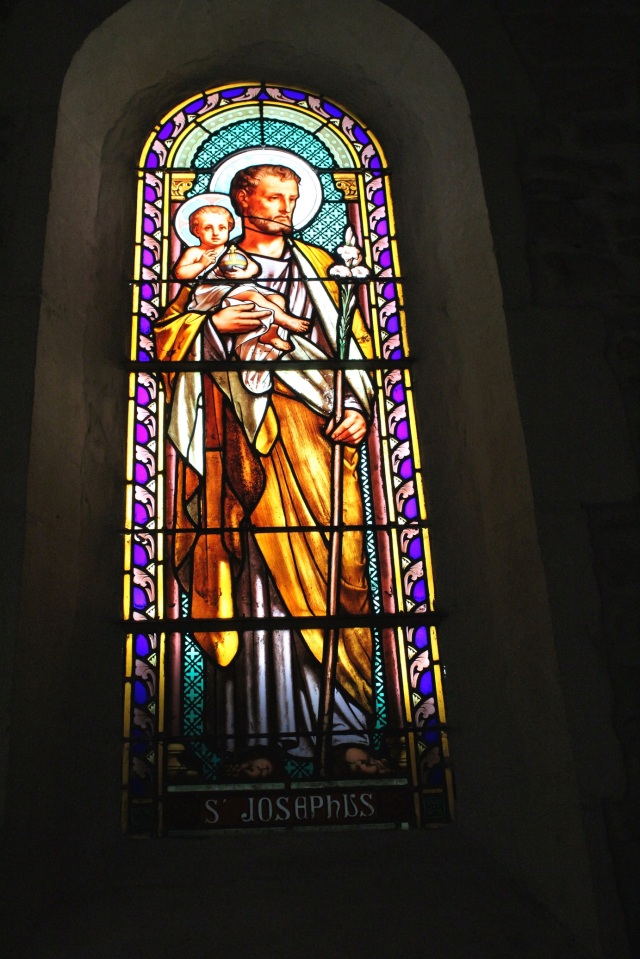 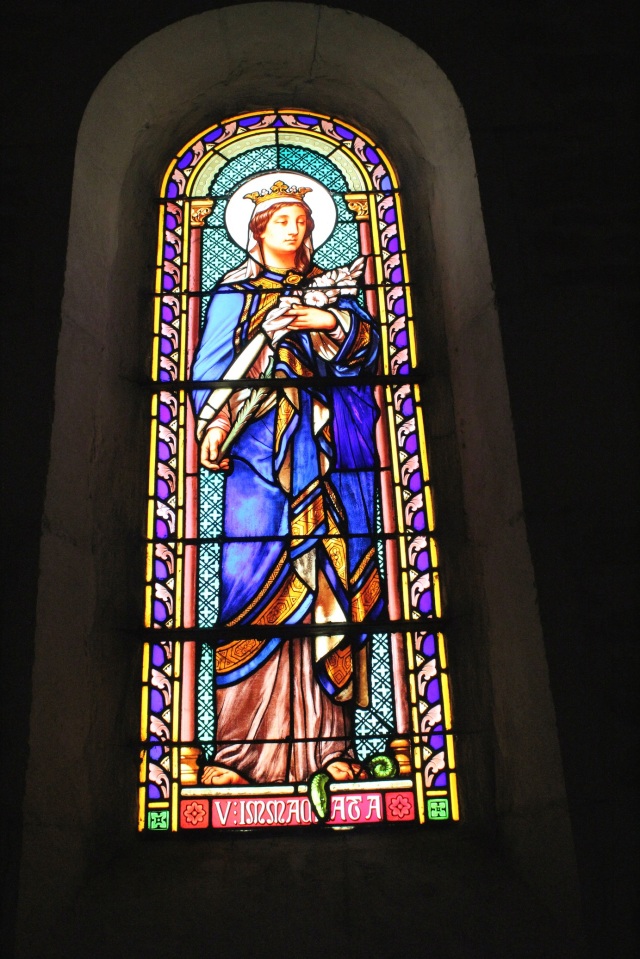 [There was a lovely little church and members of the group said it was worth a visit.  I went back for the stained glass photos only to discover the door was locked.  The man with the key must have seen me (and how many other tourists before?) and came dashing across the street in a white t-shirt, shorts, I believe slippers, and a severe case of bed head.  Nice of him to let me in for a quick peek though!  😉   ]

[We were at the lovely little village of St. Etienne des Sorts.  Reminded me of an old colleague from D.C. whose name was Steve and who was from New Orleans.  Accordingly, we always called him Etienne – French for Steve.] 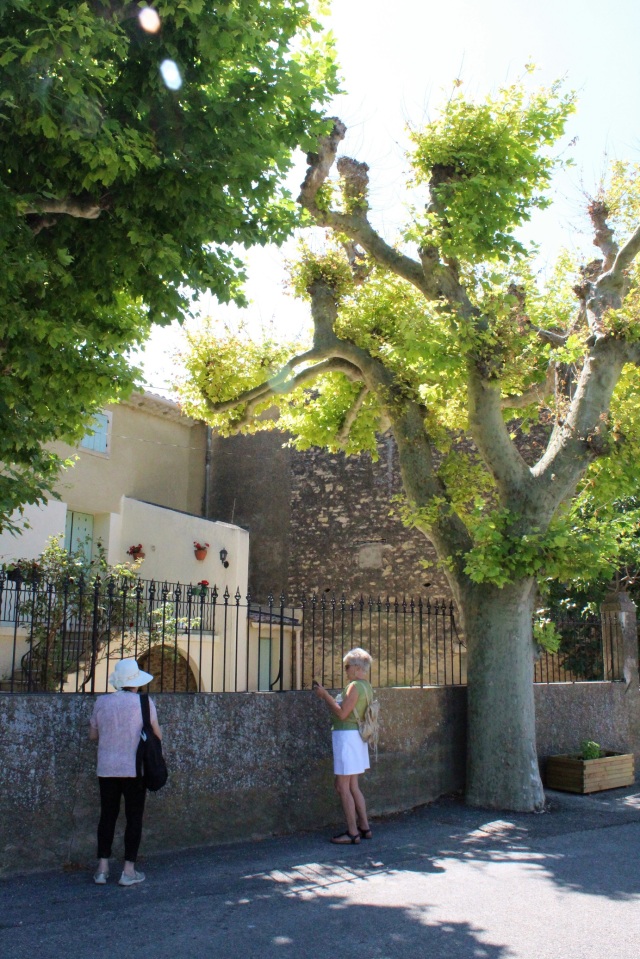 [The Biddies peek over a fence.  The locals likely weren’t used to boat loads of American tourists wandering through their neighborhoods.] 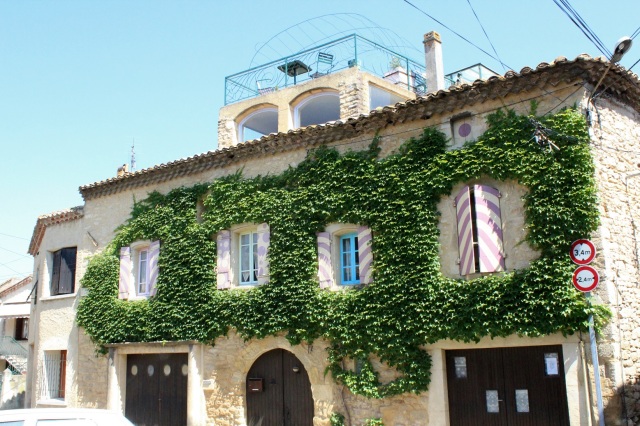 [Obviously the abode of someone well-to-do – nice roof top dining.] 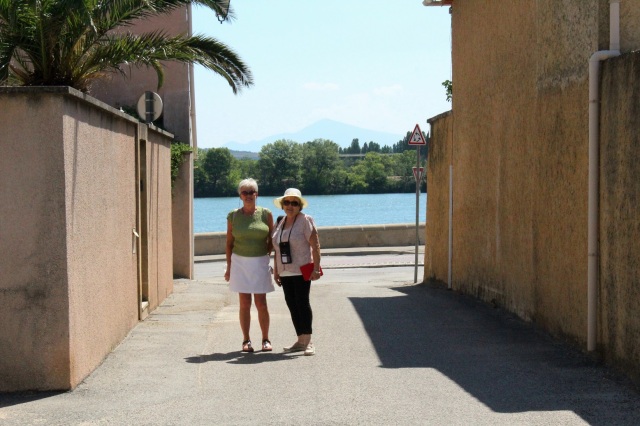 [After wandering the neighborhoods, we found our way back to the river . . .] 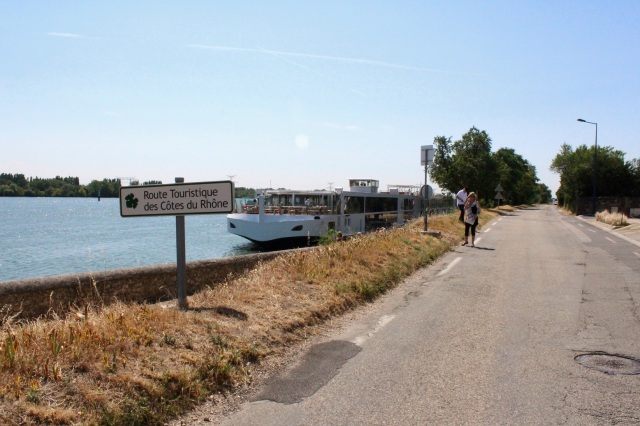 [Conveniently, there was a wine store just across the street . . . ]

[They did a box office business from the boat people!  🙂  ]

[What we bought there . . . and the captain bought a bottle of such for each passenger room for our troubles.  🙂  ] 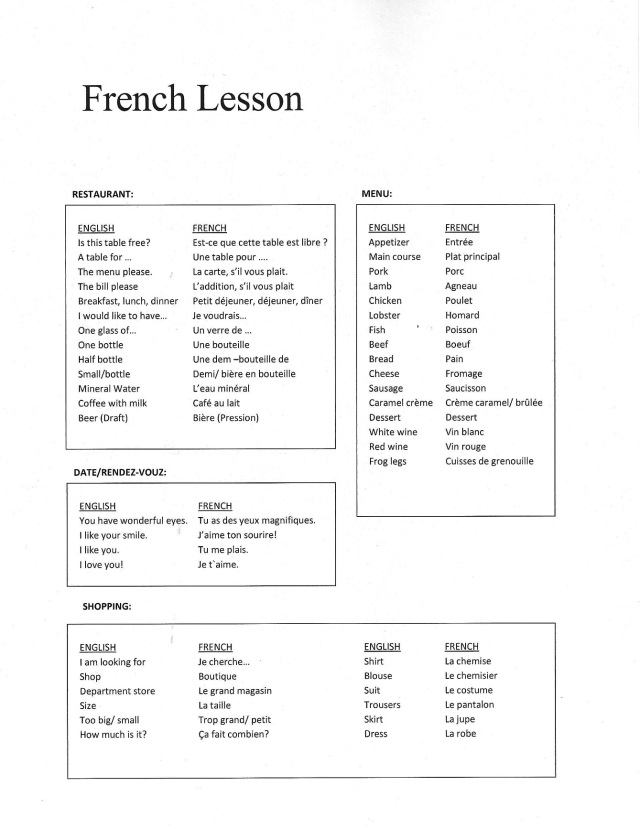 [So, if you’re going to be stranded in a small French town, you might as well learn the language.] 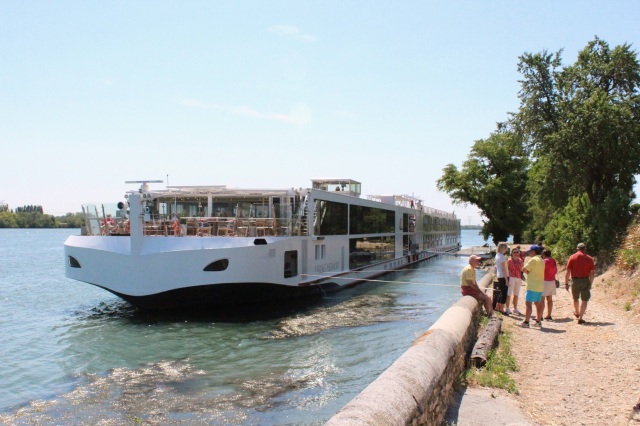 [Just hangin’ around – some on the boat, some on shore.]

[Back on board, Hey, let’s make the best of this!]

[Well, if we’re stuck, how ’bout a bus sightseeing tour.  This is Pont St. Esprit, the original “hometown” of Jacqueline Kennedy’s ancestors.] 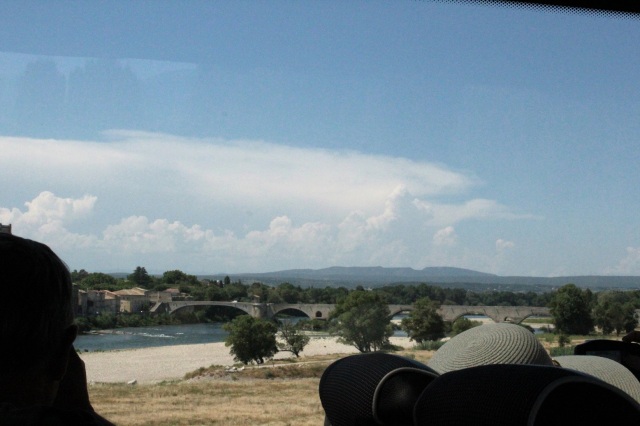 [And again.  In keeping with a longstanding tradition of always being in the wrong line, I amazingly am always on the wrong side of the bus for photo ops!]

[Yes, we’re going to Viviers.  This was on our itinerary as a schedule tour stop.]

[The assault on the summit begins.]

[“Weakie” wanted to see food.  Here’s food!  As an aside, the guy in the center of this photo and his wife directly ahead of him became acquaintances aboard the ship – I believe specifically on the party/dancing night.  🙂  I don’t recall but they may have been part of the fun-loving French-Canadian contingent.  Anyway, as with all the other passengers, we parted ways at the end of the cruise in Chalon-sur-Saone, 200 miles south of Paris.  Then, amazingly, among the throngs of people at Versailles three days later, we ran into them again!  Coincidence . . . or homing devices?] 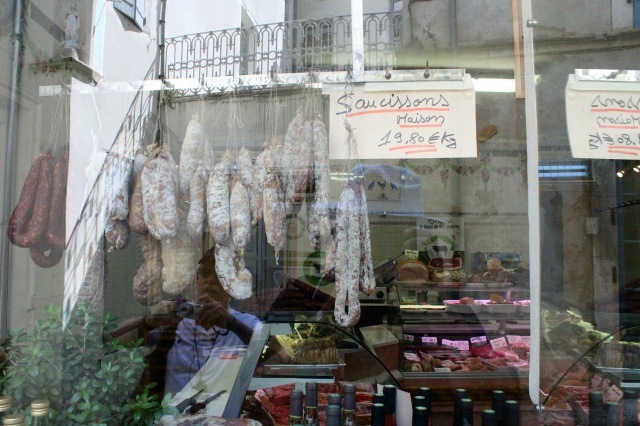 [Really for “Weakie,” the sausage king of Lake L’Homme Dieu!]

[This guy/gal looks so much like our old cat Woody, though Woody didn’t speak French.  I wonder what he/she did to get himself/herself incarcerated?]

[Program director Cornelia still trying to make all this happen on the fly!  🙂  ] 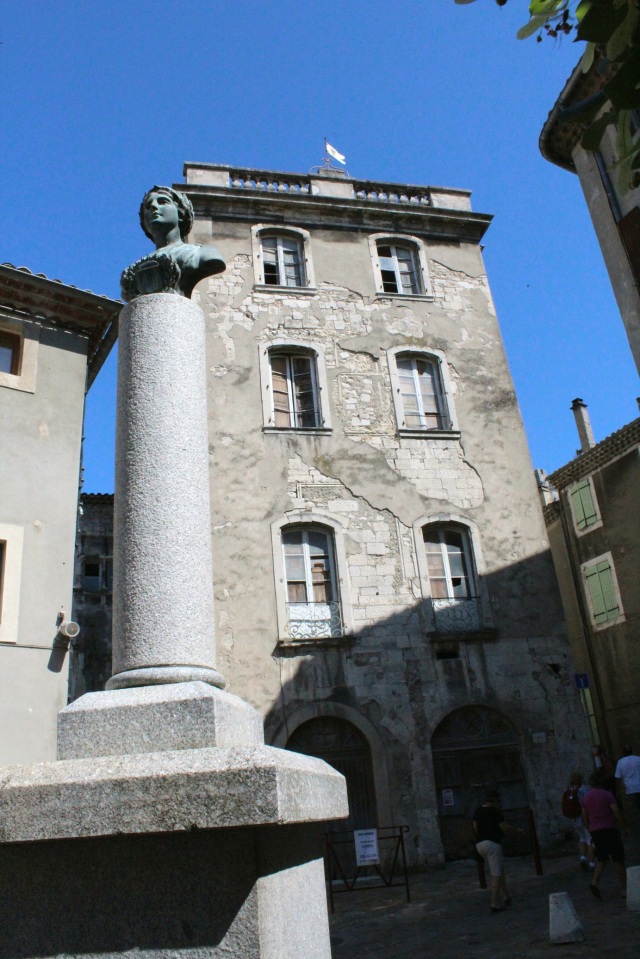 [As I recall, the oldest building in Viviers.  While it’s on the market, we were told no one wants to buy it because historical preservation laws prohibit the renovations necessary to make the place habitable.]

[It’s either Marianne (the symbol of the triumph of the republic) . . . or Vanna White?]

[Rue de Chateau, as it says on the side of the building.] 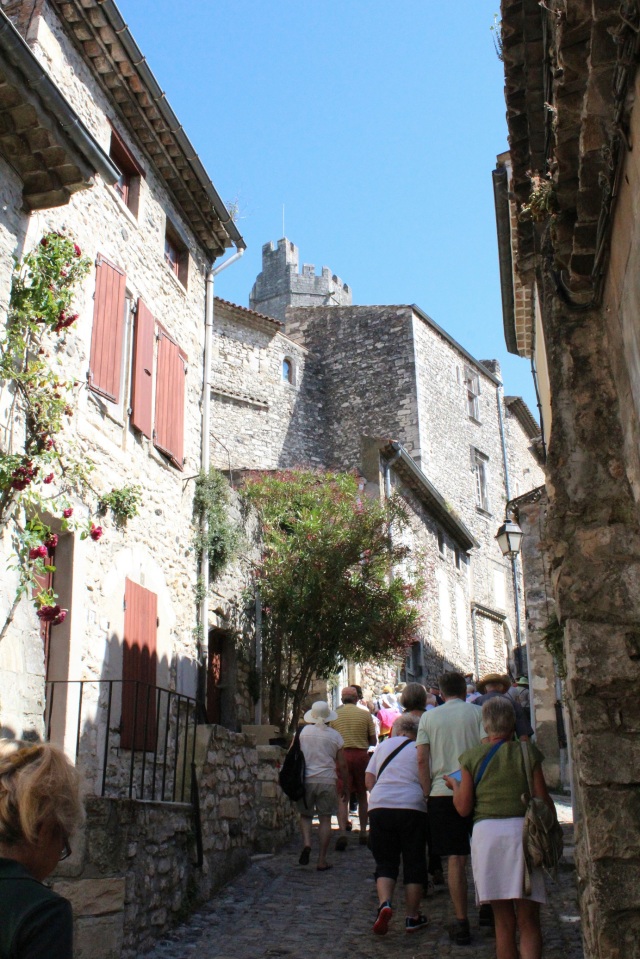 [Probably a rest break  – though our guide (in the cool hat) appears to be explaining the hole in the wall.  My guess is it’s the opening for the projector for drive-in theater movies.] 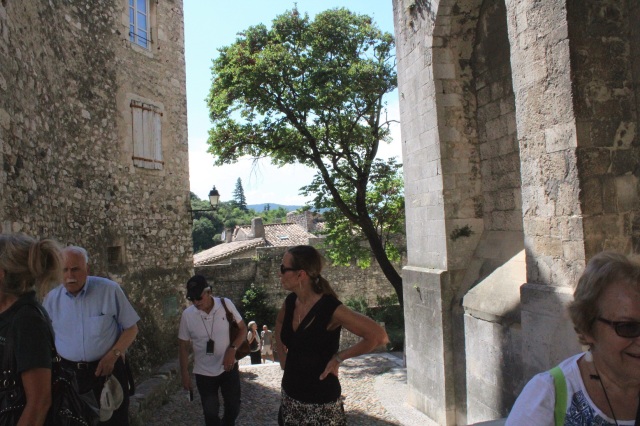 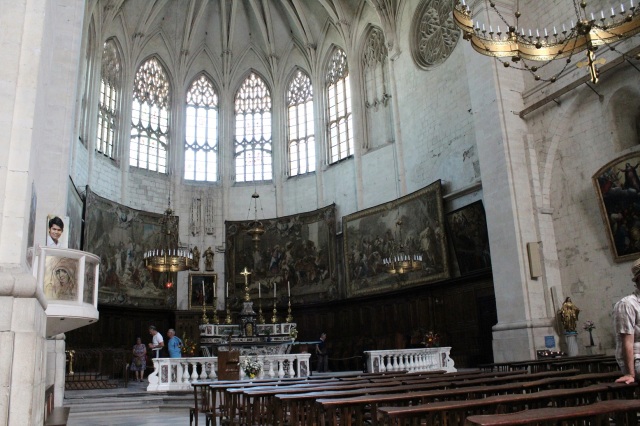 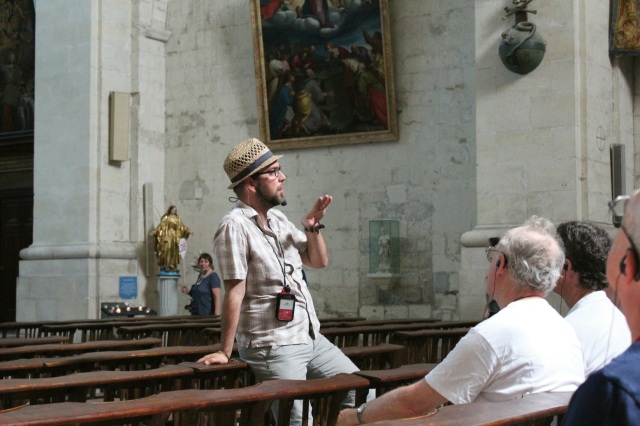 [Our guide relates its history.] 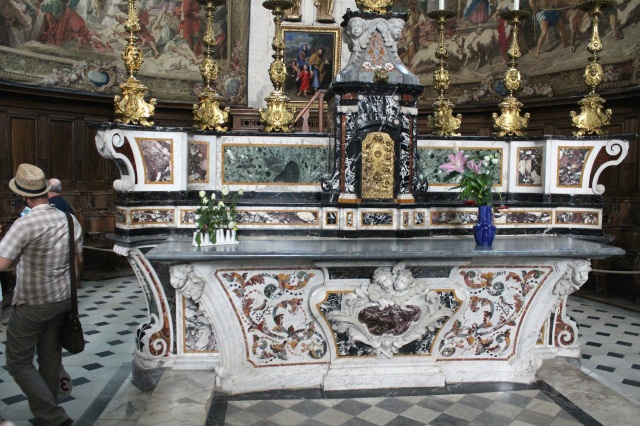 [This kind of detail work could be done in the days before smart phone video games.] 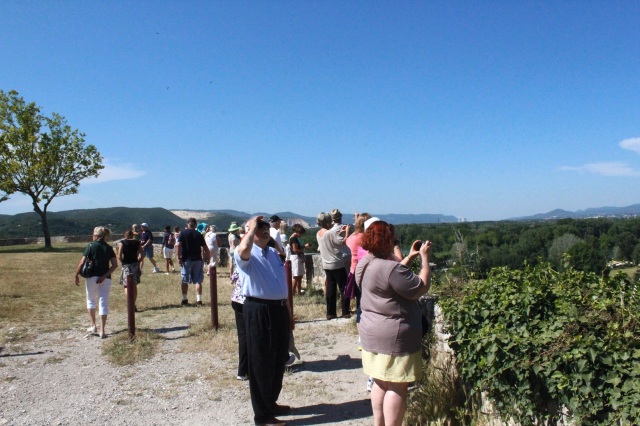 [The top of what we looked at from the bottom.] 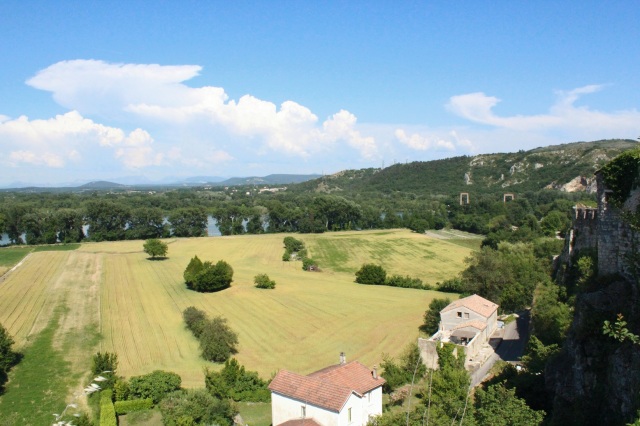 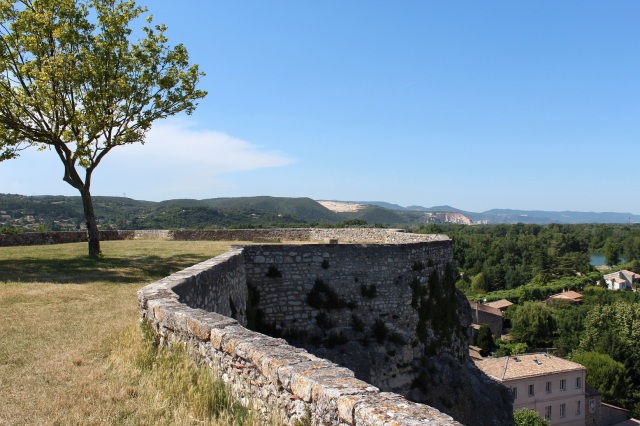 [Impressive vistas all around.]

[The super, alone with her thoughts.] 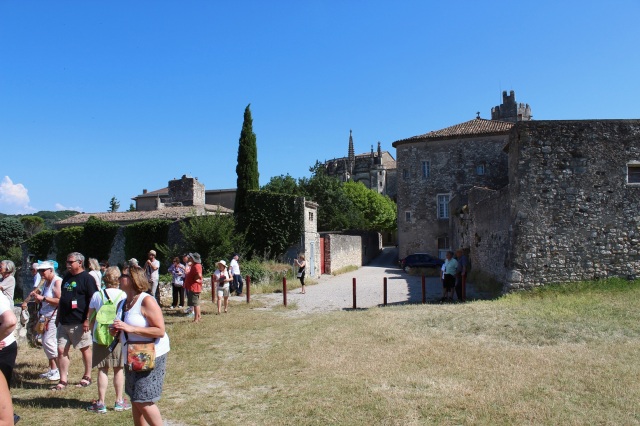 [The statue of St. Michael – remember we saw him back at the beginning of all this.] 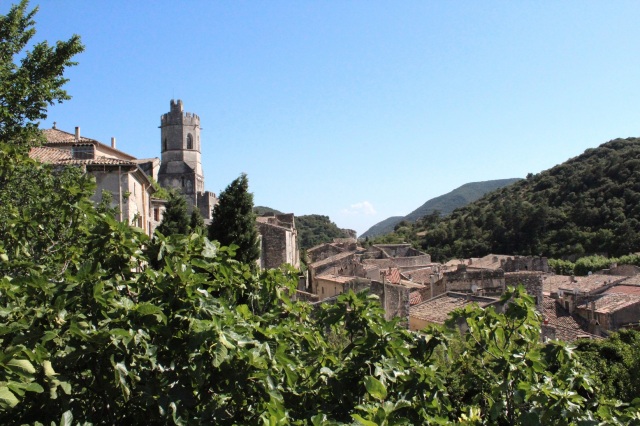 [Just wandering around for photo ops.] 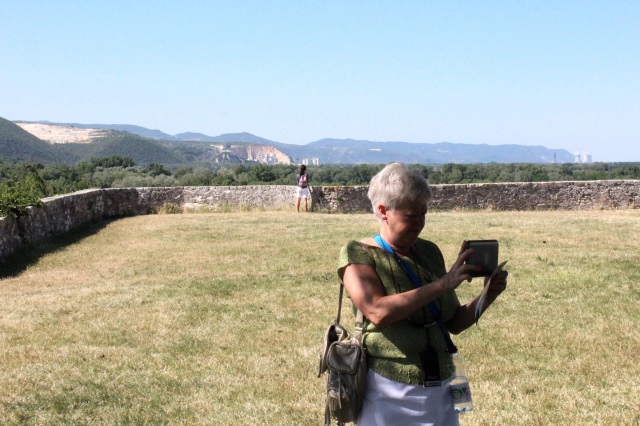 [The super lining one up with a nice background.]

[From whence we came.] 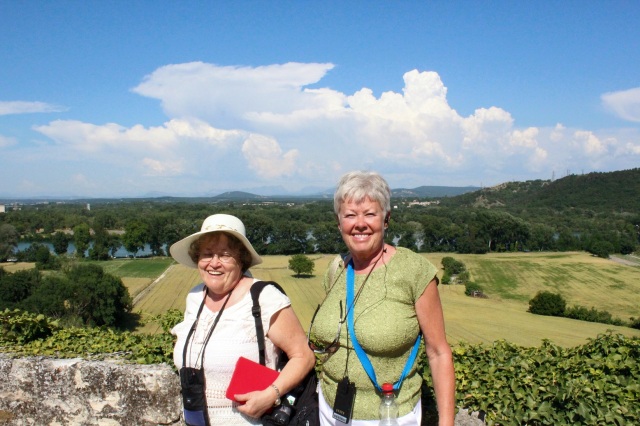 [Back through Jackie Kennedy’s family’s hometown.]

[Ahh, dinner on the “roof” with a strolling accordion player.  All’s right in the world.]

[Elizabeth checks out the available appellations.] 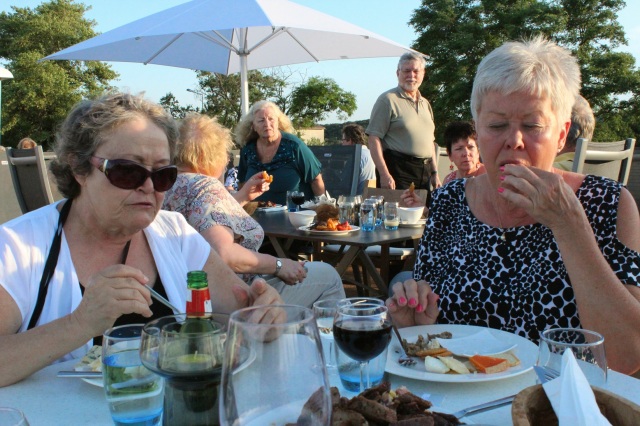 [The sisters Callecod.  (And lots more food photos for “Weakie.”)] 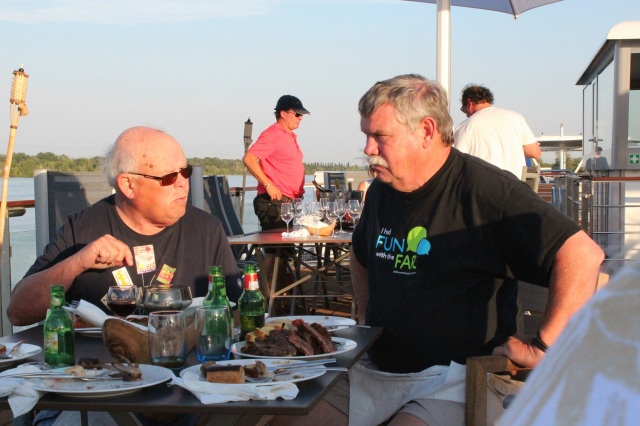 “The only French word I know is oui, which means “yes,” and only recently did I learn it’s spelled o-​u-​i and not w-​e-​e.”  ~ Stephanie Perkins

Up next:  Still stranded?