[For all you snowbirds, I’m happy to report that we were able to “open up” the house this afternoon, and the supervisor was at long last able to get out in the yard and get all dirty (she has been pacing the house for weeks waiting for this day to happen!)] 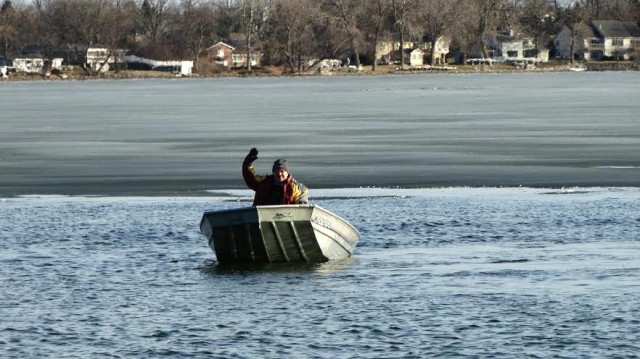 [As further proof that we are trending in the right direction, this afternoon I received this photo from my cub reporter (Paul “Rock” Fieldhammer) at the other end of beautiful Lake Darling.  The lake is still mostly covered by ice, but this is the first reported boat sighting of the season.  🙂  ]

We now return to our regular story . . .

[January 11, a Sunday, Beth and Chris drove up from San Diego so was just decided to make a day of it in San Marcos.  First on the agenda for The Biddies and me was to eat lunch locally before “the kids” arrived.]

[So, we began by perusing the city’s famed restaurant row.  Based on her expression, a believe the supervisor has a target sighted!] 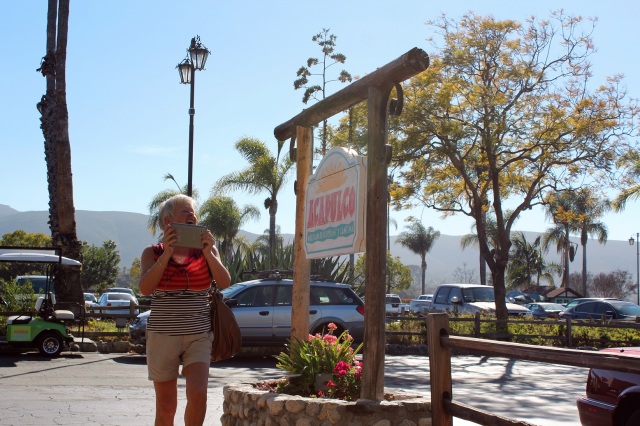 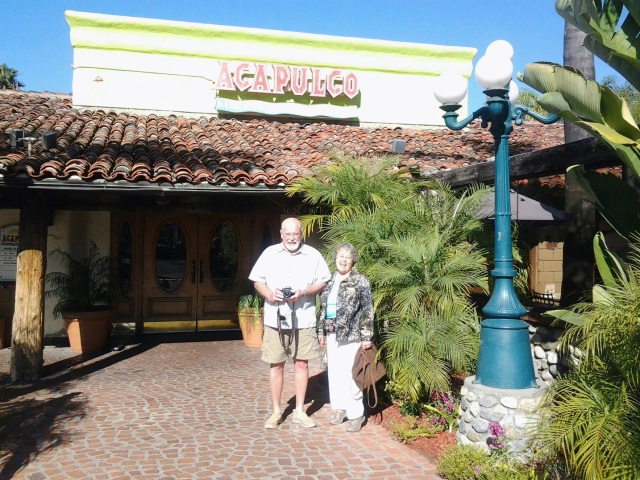 [And here’s a photo by the supervisor on her tablet.  I believe the first (and most important) things she reports on Facebook are where we eat!  Reetz and I are at the entrance of Acapulco, which gives you a clue it’s not Chinese.]

[And now it’s menu time, an ordeal that now always begins with, “Are there any specials today?”] 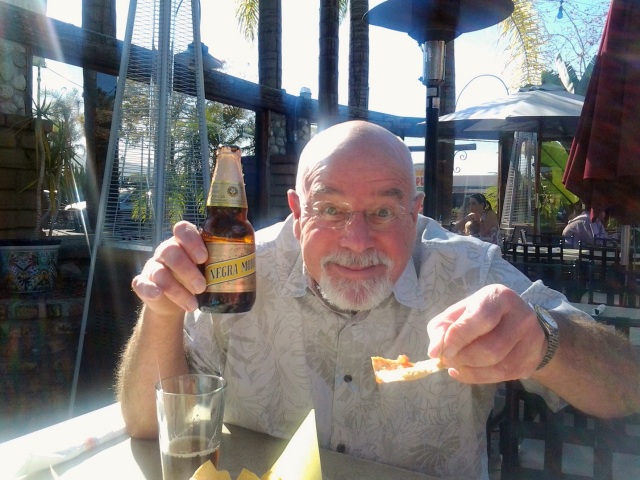 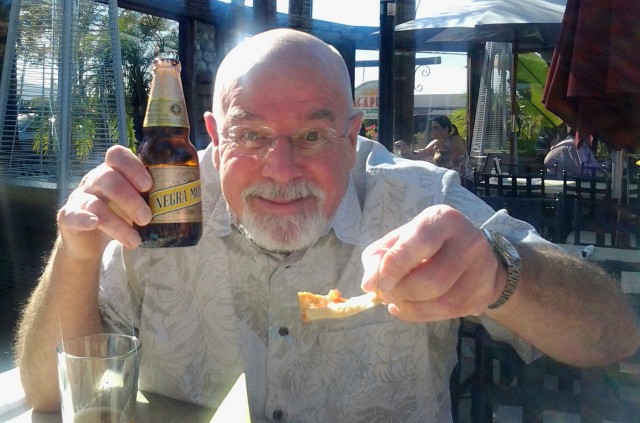 [It’s always easy for me to order Mexican, as the supervisor captured on her tablet, just bring a dark beer, chips, and salsa and I’m good to go!] 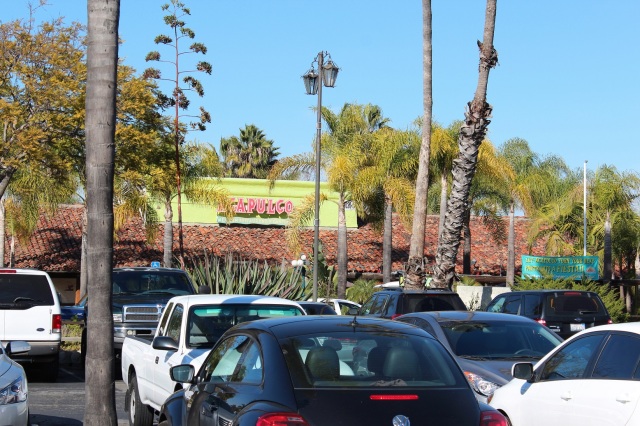 [While The Biddies figure out the bill (they used Mexican numbers), I meandered outside to shoot the neighborhood (this actually isn’t very far from where we “lived”).]

[And here’s where we were.  Spotted on day one, I said we gotta spend some time at this place!  🙂  ] 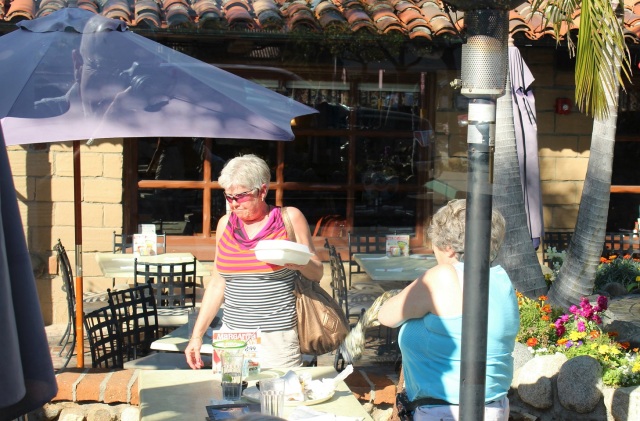 [Bill figured out, half the meal in a Styrofoam box, The Biddies are ready to boogie.]

[As I recall, after Beth and Chris arrived, we all spent the afternoon just vegging outside, in the sun, each totally concentrating on our social media devices, just like a bunch of teenagers.   And then it was time to go back to Double Peak Park, our third time up but a first for Beth and Chris.]

[So we just mingled, awaiting the inevitable sunset.]

[Where we’re going.  We just stayed in the parking lot the previous night, so we decided to live dangerously with the five of us and go up one more “flight” all the way to the top.] 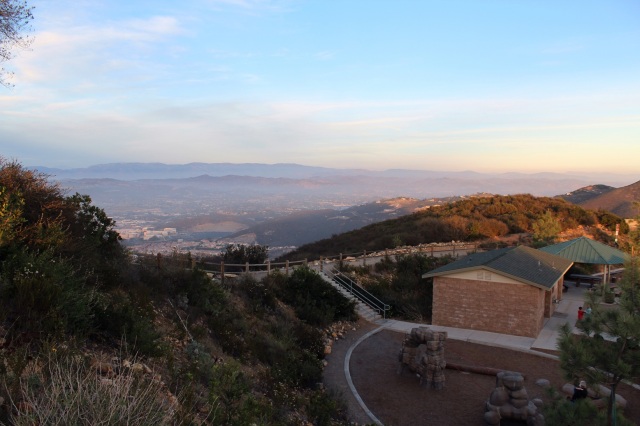 [Shooting back to the university.] 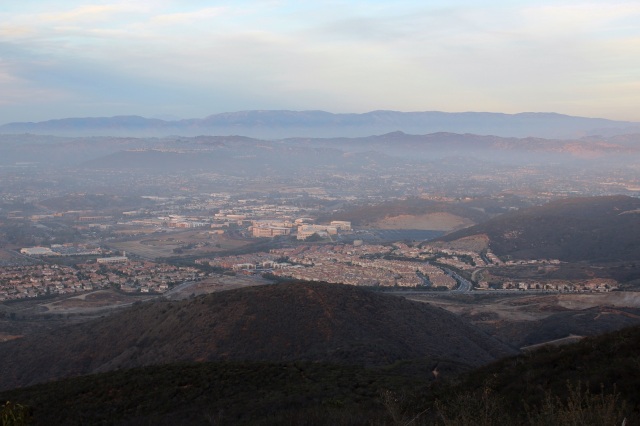 [A closer-upper of said university.] 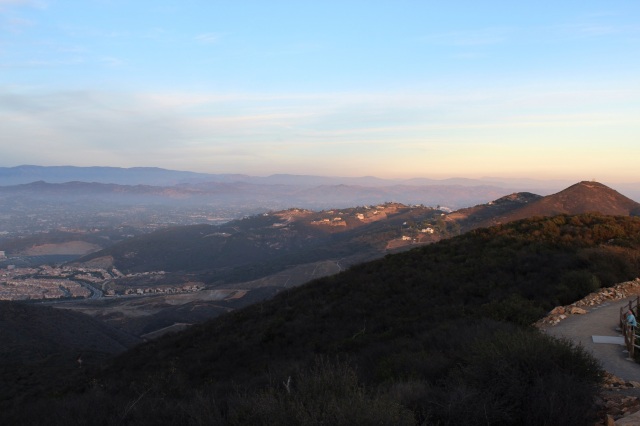 [Creeping neighborhoods are moving up the mountain . . . ] 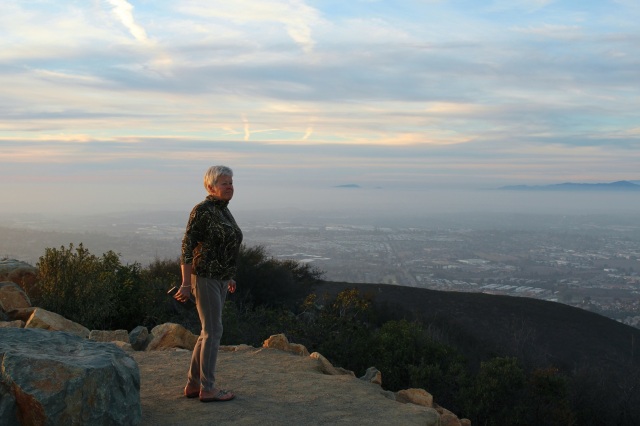 [Looking toward the ocean.] 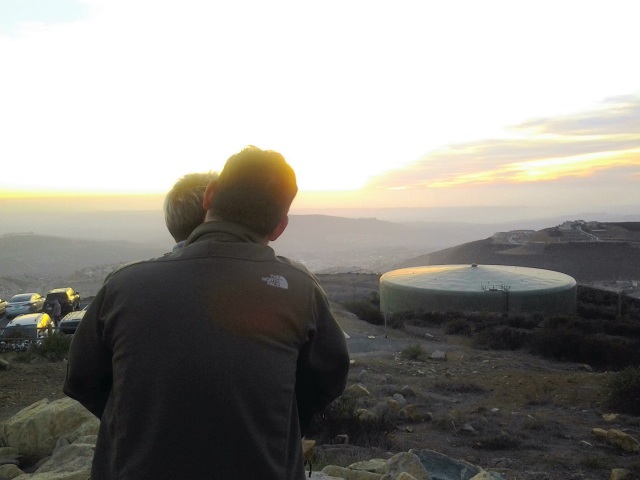 [A little PDA photo from the supervisor.]

[A much better night for viewing this time – no haze, marine layer.]

[It would have been a great sunset . . . but note that dark cloud impinging from the right.]

[Still getting some good shots.]

[Looking east as the sun sets.]

[Or is it just quality family time?] 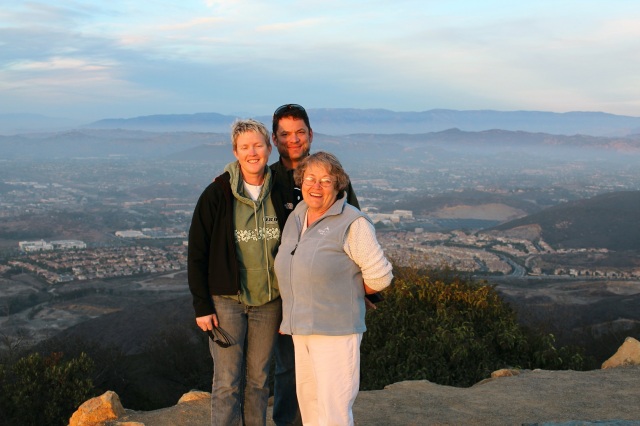 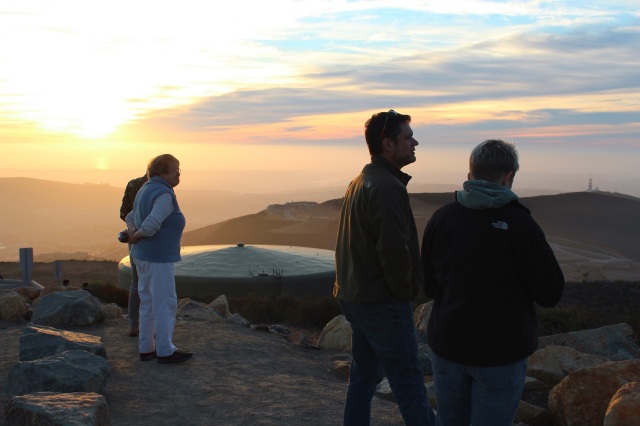 [ Ahhh, great light disbursement by the clouds . . . no extra charge for the contrail.] 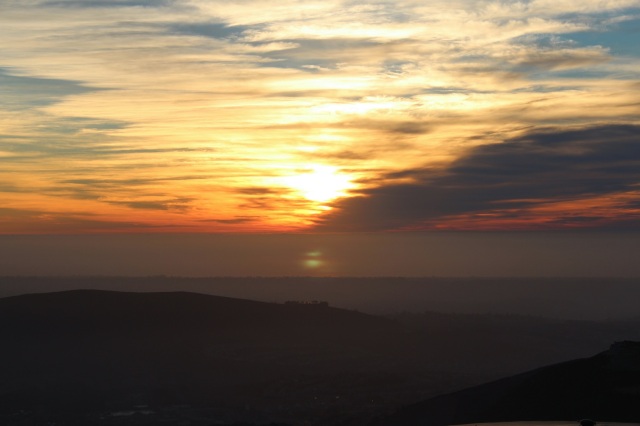 [But the dark cloud did obscure the denouement (that’s French, for denouement).]

[But we came close!] 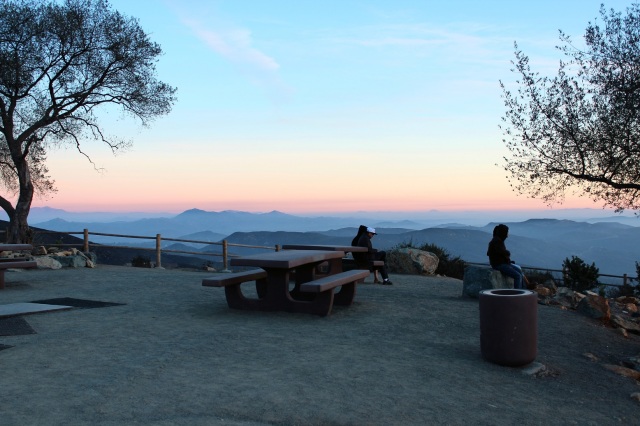 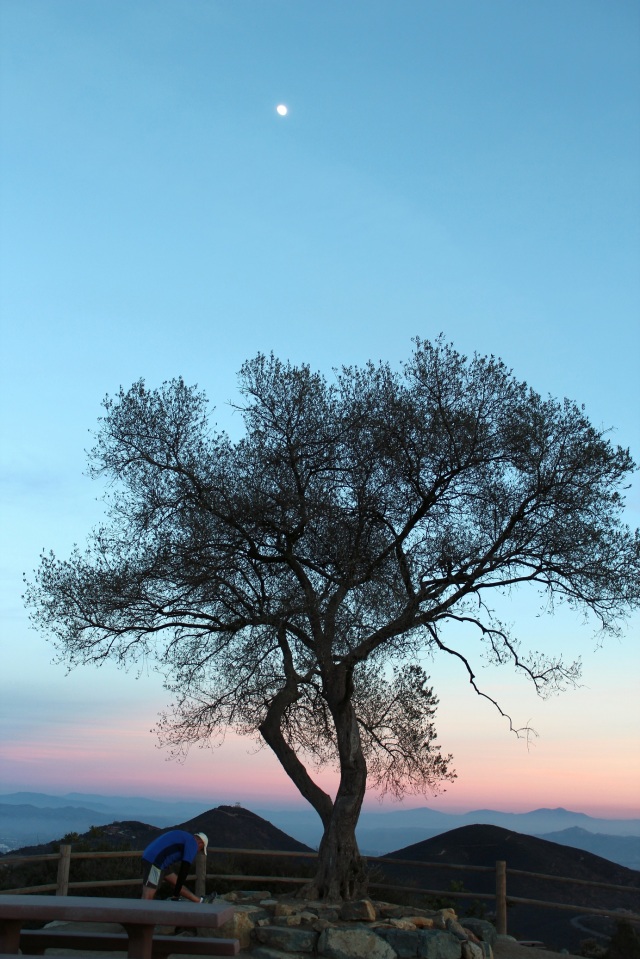 [Loved the contrast of the lone tree at the summit with the moon overhead . . . no extra charge for the jogger.]

[Did anyone bring wine?]

[When I first looked at this, I thought it was an optical delusion.  Their bodies say Beth is standing behind Reetz, but their heads say the opposite?]

[Now the moon is tangled in the top branches of the tree.  Oy!] 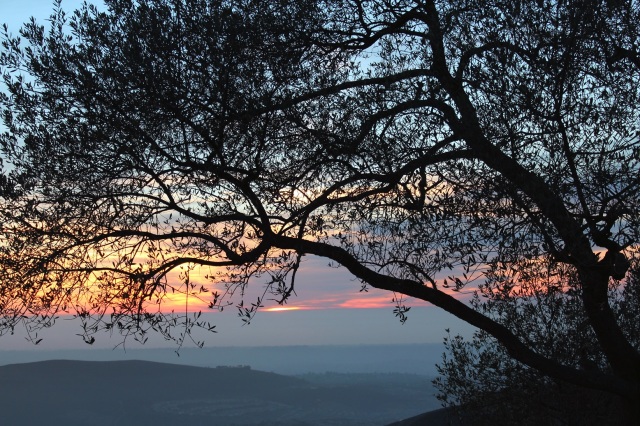 We’ll leave you now with three more photos from “Rock.”  He and Pris had been home (from Arizona) for less than a week when he shot these two days ago.  He saw the eagles pulling up dead ducks from where there was now open water.  There must have been terrible attrition on the water fowl that wintered here:

Up next:  We may actually be able to get some spring sports events in next week!

Any idiot would know women’s needs are simple.  All we want is your basic millionaire/brain surgeon/criminal lawyer/great dancer who pilots his own Lear Jet and owns oceanfront property.  On the other hand, things being what they are today, most of us will settle for a guy who holds down a stead job and isn’t carrying an infectious disease.  ~  Linda Sunshine   [Editor’s note: And takes out the garbage and doesn’t play with his navel lint?]