The Biddies and I were obviously pooped from the previous day’s safari as this was really a low photo day: 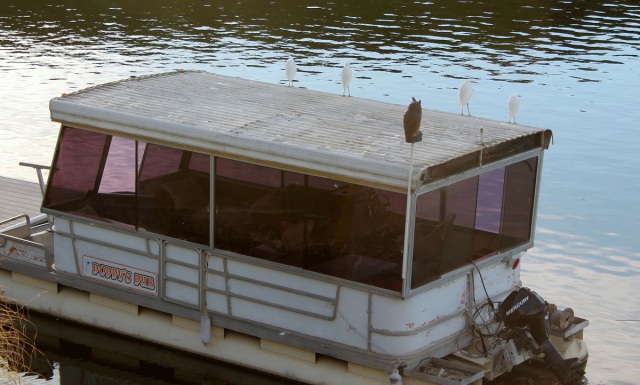 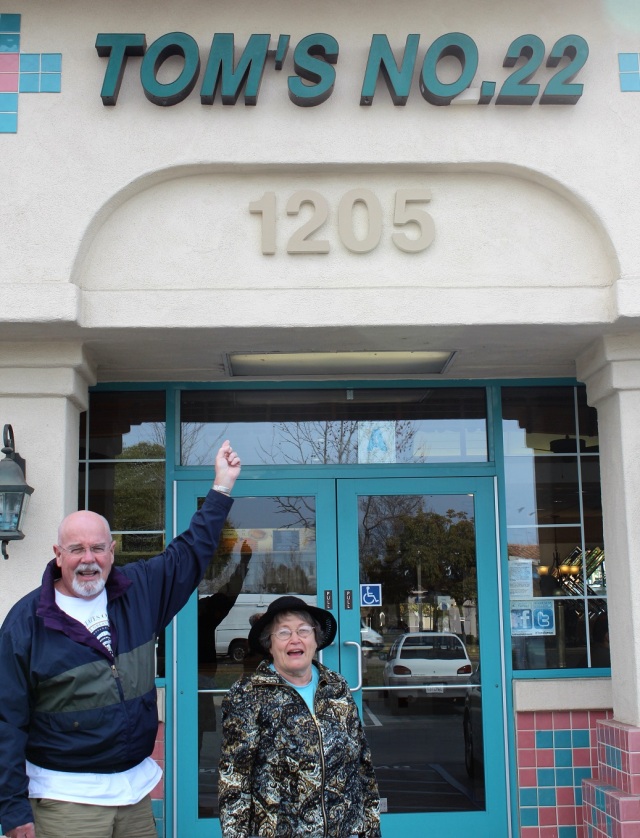 [The big plan for the day was to go to “my” burger place.]

[Started by a guy named Nick.  Now run by his three sons, Peter, Perry, and George.  So obviously it was named “Tom’s”?]

[Though a burger joint, Tom’s signature sandwich is the pastrami.  So I had to get it.  A really good choice!!  🙂  ]

[Road trip day to the desert.  To see some friends from the Minnesota.  If you’re away from Minnesotans too long, you stop swallowing your “o’s.”]

[Rita wasn’t feeling well that day, probably some sort of jungle fever hangover from the safari, so the supervisor and I headed out on “The 15” alone.] 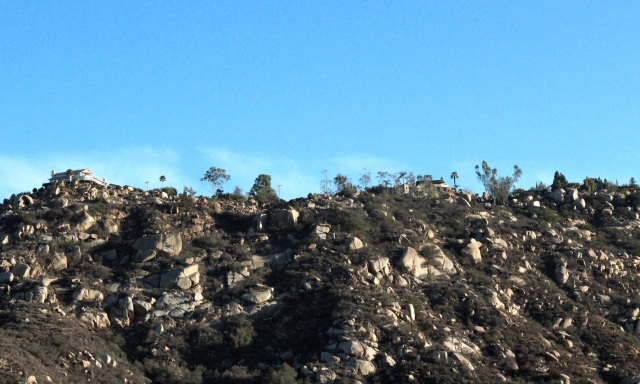 [While she drove, I took photos of hilltop houses that will eventually come down in a mudslide or earthquake.  I scares me just looking at them!]

[Ahh, there’s a reminder of the ole home state ahead!]

[We were driving from San Marcos east to Palm Desert.  A rather scenic topographical adventure.  As you will recall regarding the First Amendment, George Carlin once noted you are totally free to yell “TOPOGRAPHY” in a crowded theater.  But if you yell “FIRE,” and there isn’t one, you will be arrested.]

[It’s a good thing they don’t have to worry about ice and snow here.]

[We have driven north on “The 15” to Riverside (population 350,000, another huge southern California suburb) and then turned east on 60 to Palm Desert.] 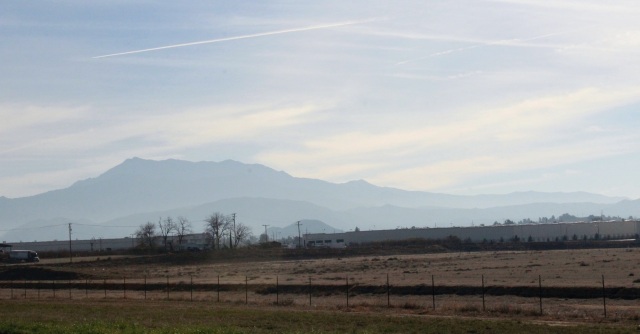 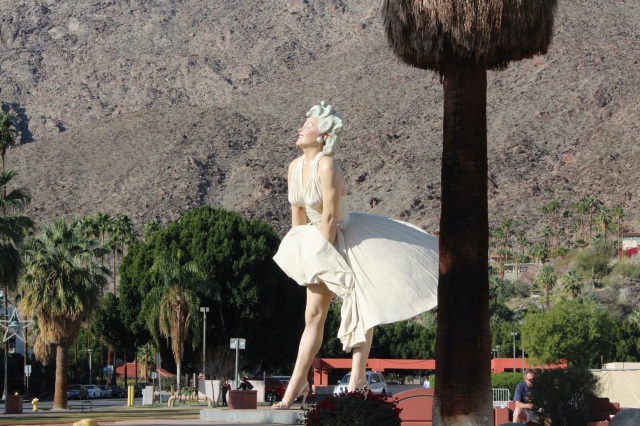 [And we have arrived in Palm Springs . . . but not with incidents.  We were very late.  A late start to make sure Rita had everything she needed while we were gone.  We came to a dead stop on “The 15” just outside Riverside where we sat on the interstate for 45 minutes while they cleared a semi that had jackknifed and caught on fire (it happened again at almost the identical spot while we were out there?).  And then our Tom-Tom died (our GPS guidance system) – we had no directions and in our rush to leave had forgotten the maps.  We limped into Palm Springs, stopped at an information center, and called our Palm Desert hosts, Beryl and Don Waldeland, for directions.]

[Shot while driving by – they were having an international film festival in Palm Springs.  We recently heard that Marilyn was dismembered and returned to her “home” in New Brunswick, New Jersey.]

[Since nothing comes easy, we drove all over Palm Desert and had to call the Waldelands two more times to figure out how to get to their place.  Every road is named for a famous entertainer and we obviously found that confusing . . . “turn left on Bob Hope, right on Dinah Shore . . . “]

[Nope, not there yet but at least kept running into photo ops!] 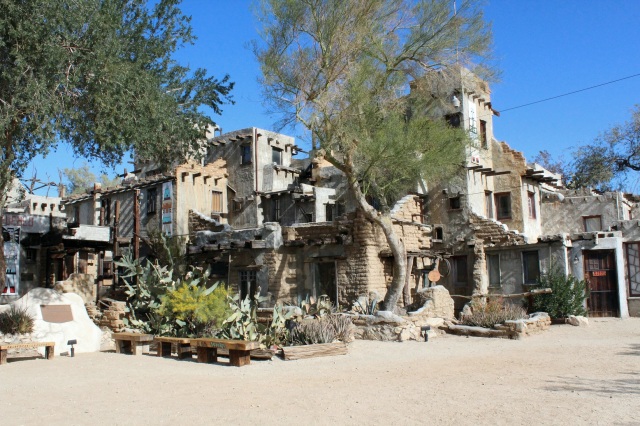 [Well, we eventually made it, and Beryl and Don had the rest of the day all planned out for us.  First, Cabot’s Pueblo Museum, in one of the driest and hottest spots in the country, Desert Hot Springs, just a little further into the desert from Palm Desert.]

[You can read all about it below.] 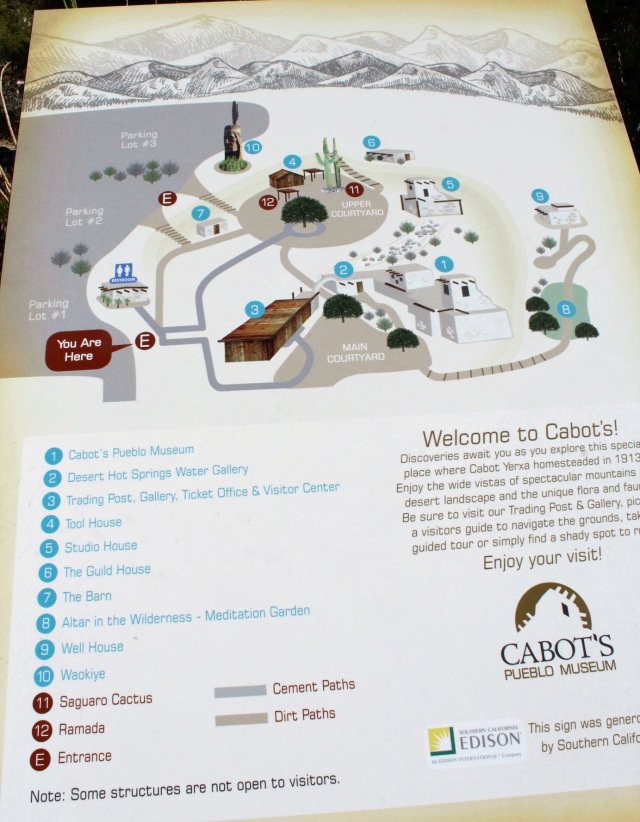 [If you take pictures of the signs, you don’t have to explain anything.  🙂  ]

[The requisite photo op at the totem pole – Beryl, Don, and the supervisor.] 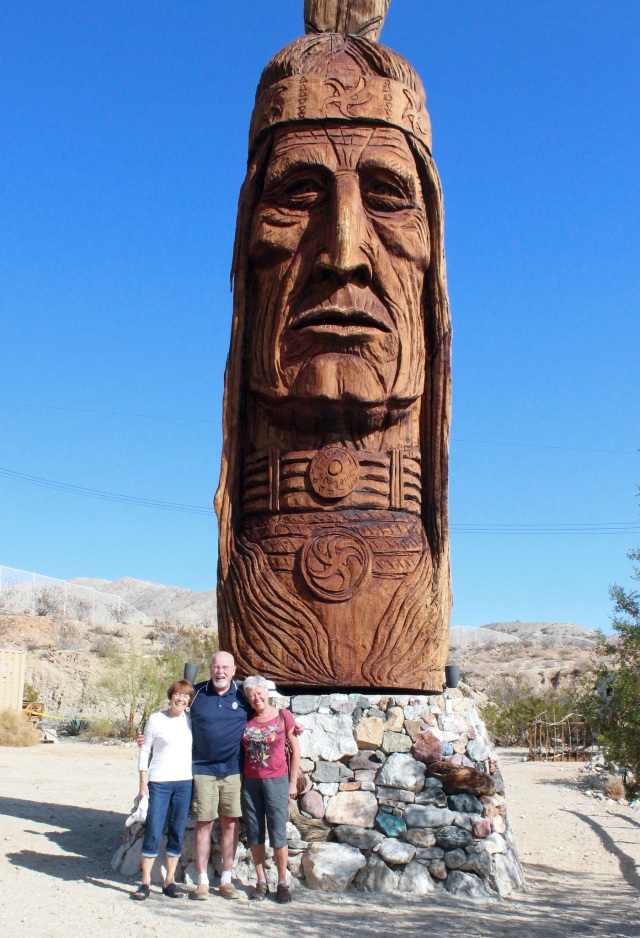 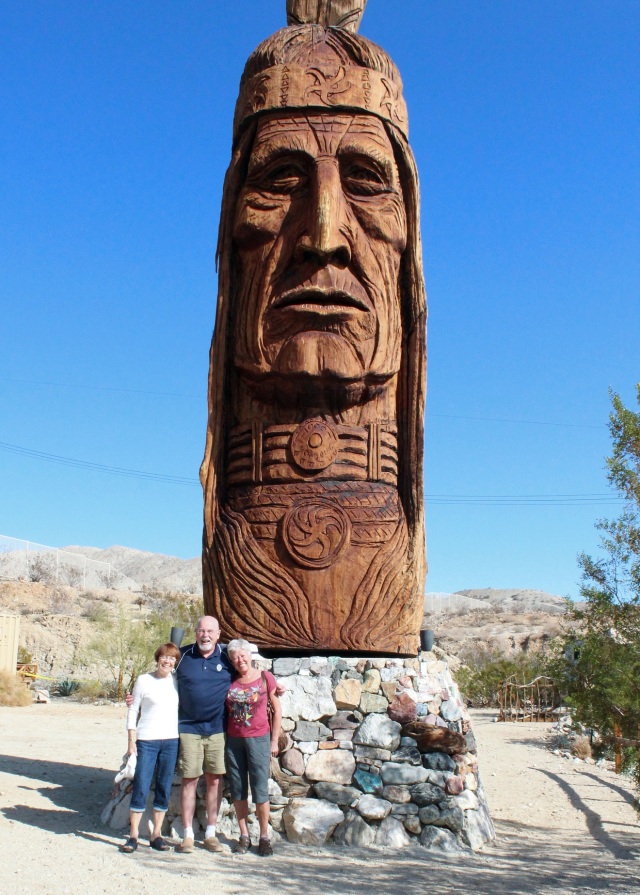 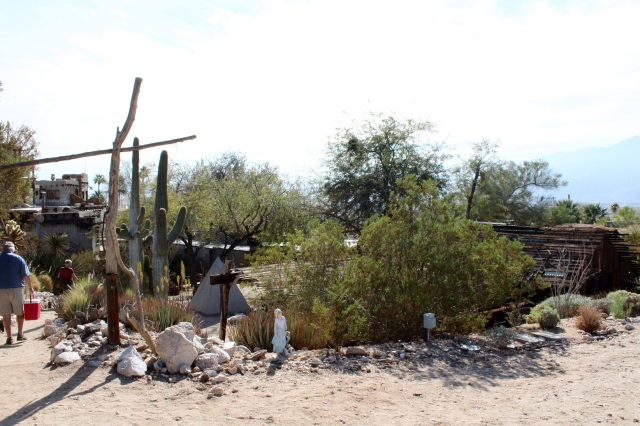 [Now, looking for a place to picnic.]

[Not a lot of rain here.  Even the dust has dust.] 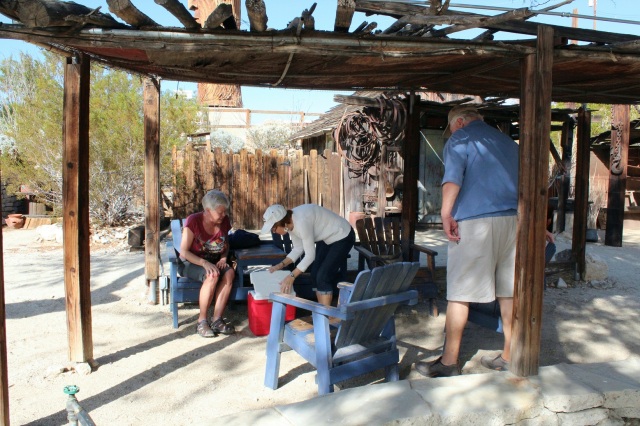 [In the summer, I hesitate to think what the temperature would be here.  Oy!] 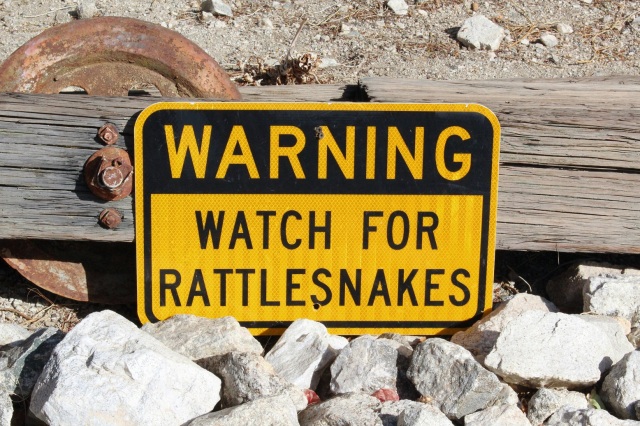 [I heard they go for your chips and salsa!] 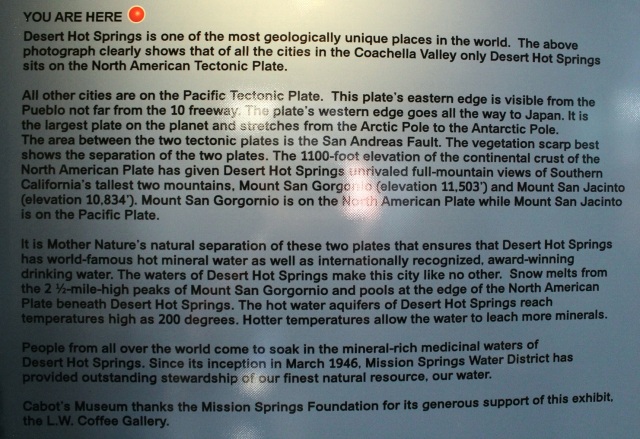 [A retired teacher led us on a tour of the house, built by Cabot all by his lonesome.  An excellent presentation, but no photos were allowed inside.]

[Quite a place, but a bit claustrophobic inside.] 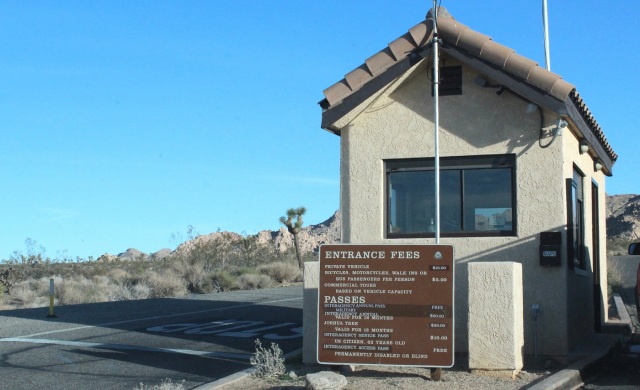 [And then it was on to Joshua Tree National Park.  I was glad we did this because the last time we were in the area, we decided we didn’t have enough time to do so.] 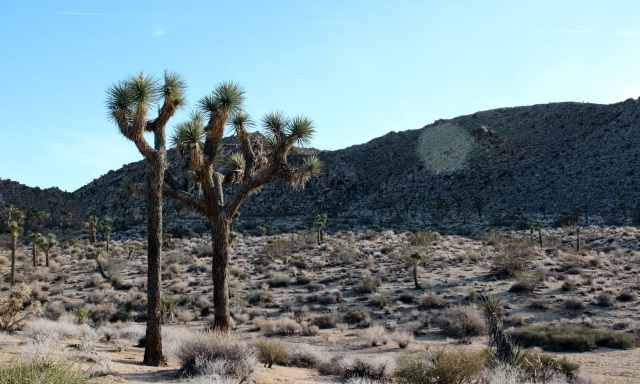 [Ladies and gentlemen: The Joshua Tree.] 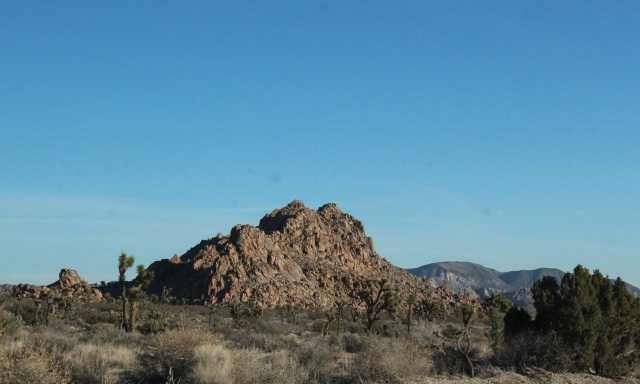 [A very unique landscape that I found more fascinating than I thought I would . . . if that makes any sense?]

[I think I’ll just let the photos speak for themselves.  It was getting late in the day, so we didn’t have time to stop much so a lot of these shots are out the car window as we’re driving.] 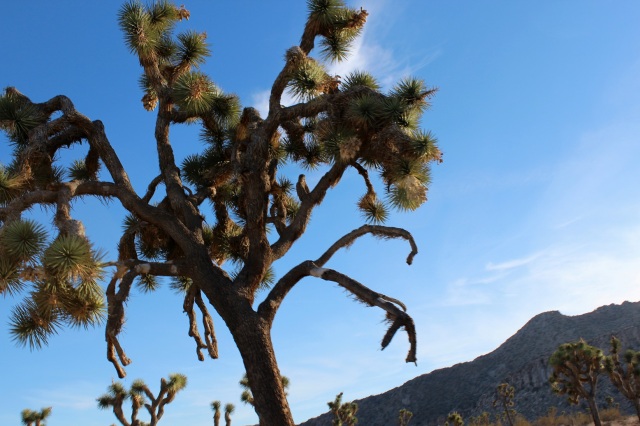 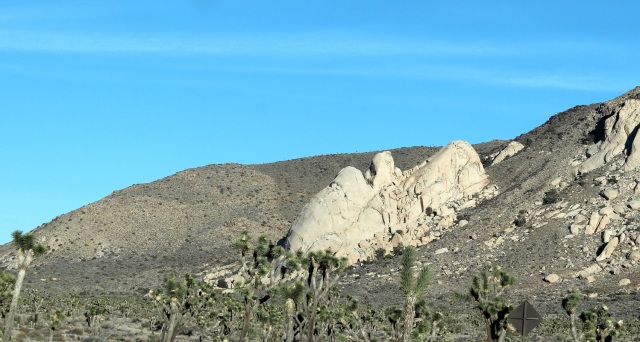 [Oy, the infamous “jumping” cholla cactus.  They’ll “attack” you if you try to walk by them.] 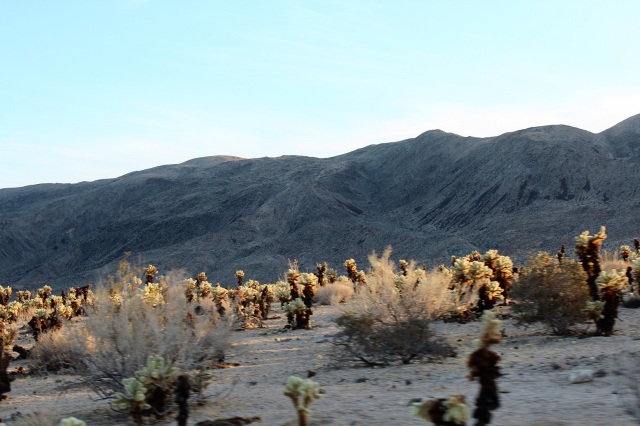 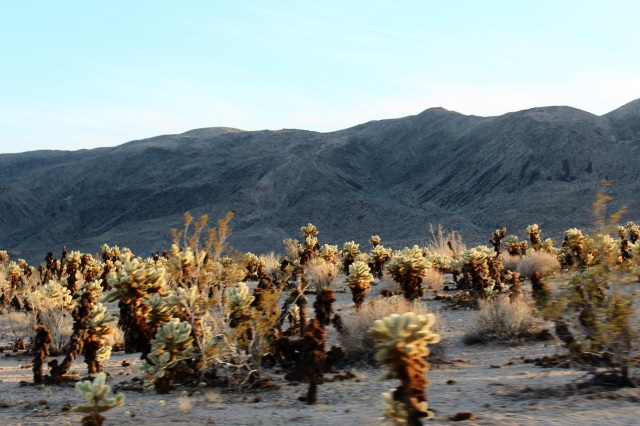 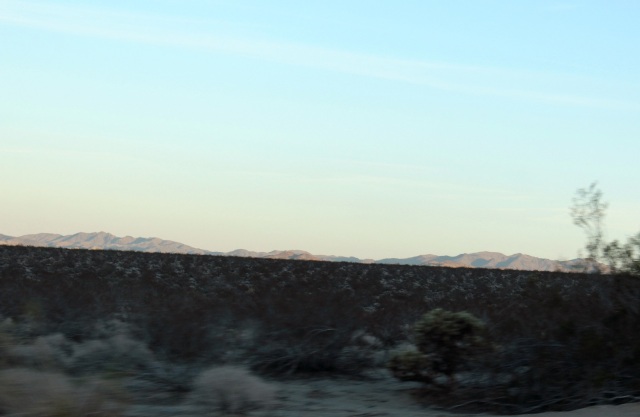 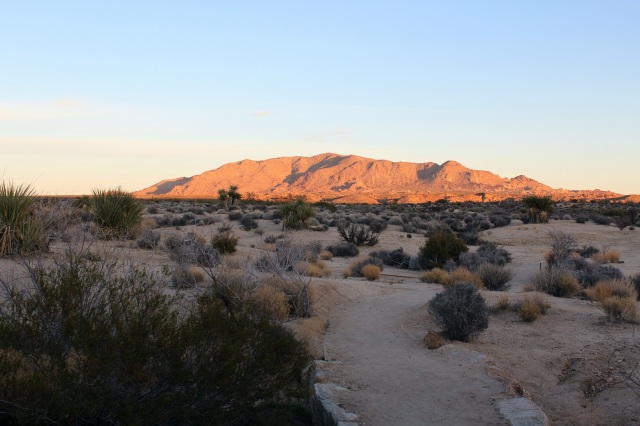 [Though our trip through was rushed, I’m glad we were here at this time of day.  Dawn or dusk provide beautiful lighting for photo ops in the desert.] 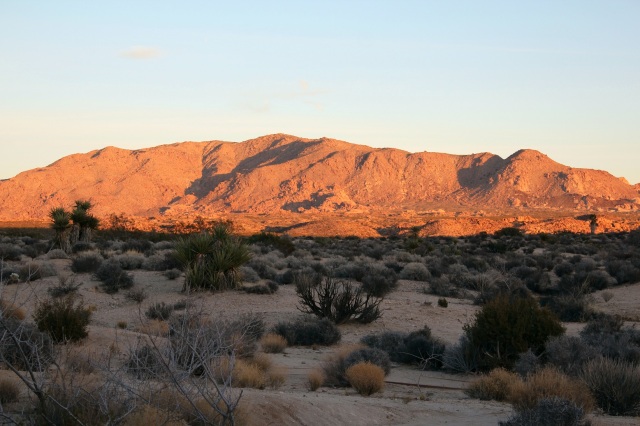 [The end of a cowboy movie?]

[We exited the park toward the Little San Bernardino Mountains, I think?] 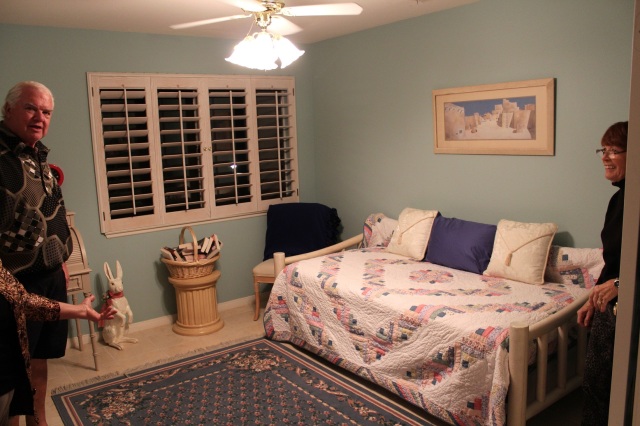 [Don and Beryl display what would have been Rita’s room.] 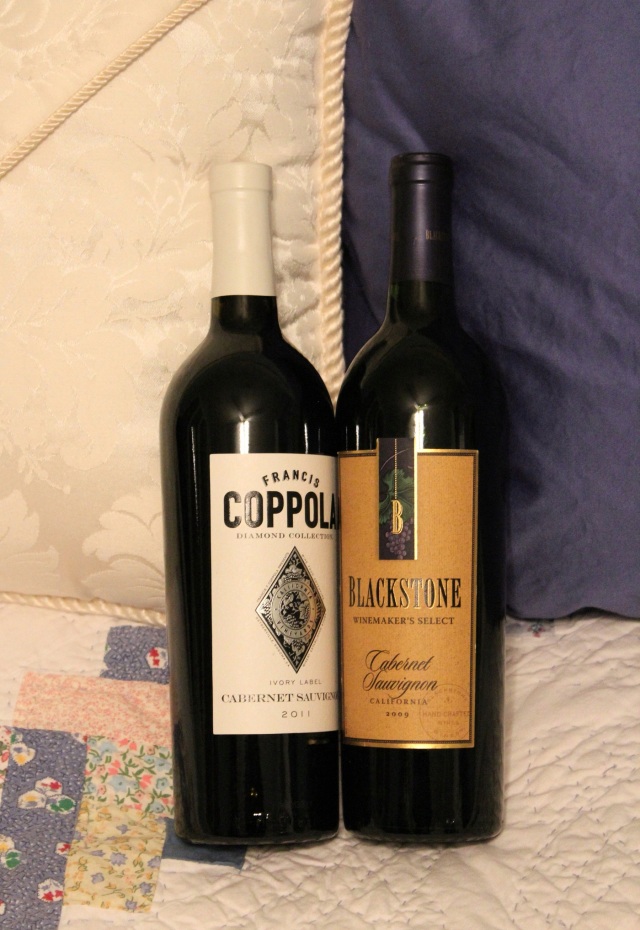 [Fortunately, we were able to make use of the wine that was left on the bed for her.] 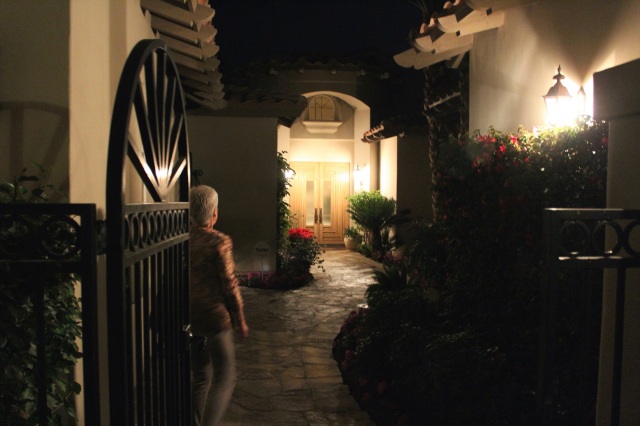 [That evening we were all invited for dinner at Sara and Jim Sevey’s in La Quinta.]

[Alexandrians in the desert!]

No one can be so welcome a guest that he will not annoy his host after three days. ~   Plautus

The first day a guest; the second, a burden; the third, a pest. ~   Edouard R. Laboulaye