Since the State Tournaments . . .

Taxes and the winter sports seasons have now been completed.  So, now what?

[The “fake” sun, before the real one appeared above the horizon on March 3rd.]

The morning after the Cardinals’ state tournament basketball game, the supervisor and I awoke from our campus lodgings to a bright, sunshiny day.  We decided to make the most of the opportunity to stroll the vicinity and to find a breakfast place with Wifi (sometimes wifi, or Wi-Fi, or WiFi . . . go figure?) – my, how we’ve become attached to it?  We shuffled to the car – remember it was still winter and the parking lot was a sheet of ice – to squirrel away our luggage.  [Aside:  A snowbird recently returned and recounted how a local from someplace south of here pegged him as a Minnesotan?  When asked how he knew, he said he recognized the ice shuffle, even in a place without ice.]  Then we hit our stride on some dry sidewalks and ambled over to the Alumni Center.  Once there we obviously looked like the tourists we were as a gentleman asked if he could help us.  We said- breakfast with Wifi!  He mentioned a few places we were aware of but didn’t excite the taste buds so he suggested Dinkytown – a little walk but it could be an appetite builder.  So off we went, passing the Sigma Alpha Epsilon lions along the way.

[We ended up at the iconic and historic Al’s Breakfast in Dinkytown.  No Wifi, but who cares.  The place is about 10-feet wide, about 12 stools at a counter, eat and get out, there are people standing in the aisle behind you patiently waiting for a “seat at the table.”  That’s our server behind the supervisor – because there isn’t room for any more!  She took  the following photo of us as well as delivering our humongous (didn’t eat for the rest of the day) omelets.]

[The wall of money from everywhere.  😉 ] 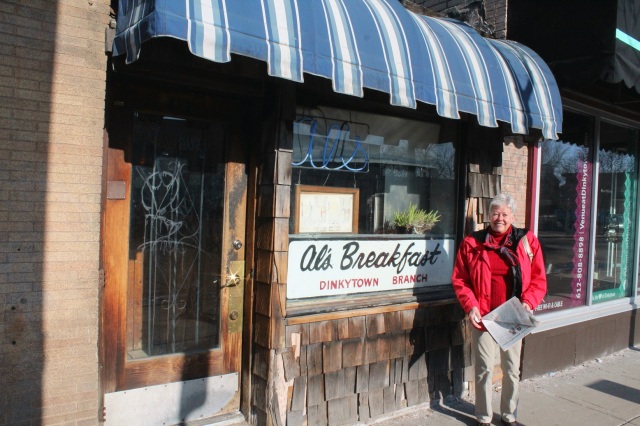 [Exit Al’s, turn right and walk about half a block, and this is your view.]

[The iconic and historic Folwell Hall on University Avenue.]

[The armory . . . brings back memories of those campus demonstration years.]

[The supervisor shares some of Al’s toast with some “behind bars” birdies.]

[A quick trip up in a hot air balloon for a shot of “The Bank.”  The open end faces the Minneapolis skyline.  The open end also faces Mariucci Arena (hockey) on the right and “The Barn” (basketball) on the left, just across the street.]

[Then it was back to the Alumni Center (a block to the left of “The Barn” in the previous photo).  I went up to see Chad Kono, the liaison to our local alumni chapter, but he was out.  I tried, Chad.] 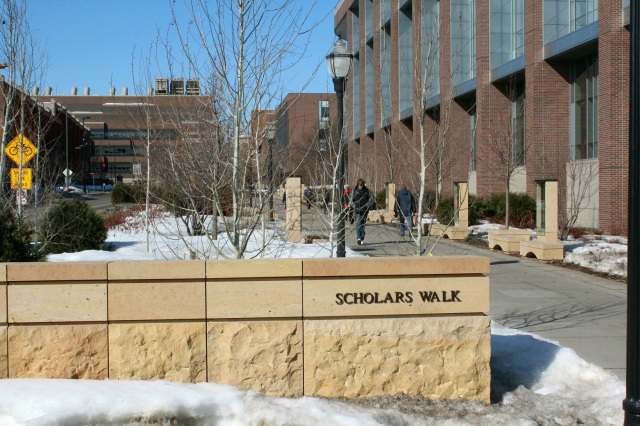 [And then it was on to the Museum of Russian Art in south Minneapolis.  We have heard good things about it for years, so it was time.  Besides, it’s in my old Stevens Avenue neighborhood.  🙂  ]

[No photos were allowed inside.  The Romanov exhibit is pretty special.  I always wondered what made Peter the Great, great?  Was it because he fathered 13 kids (I think that’s right) or because he was 6’8″ in an era when dunking was illegal?]

[The “Siberian exile” part tells it all – dark and foreboding art work.] 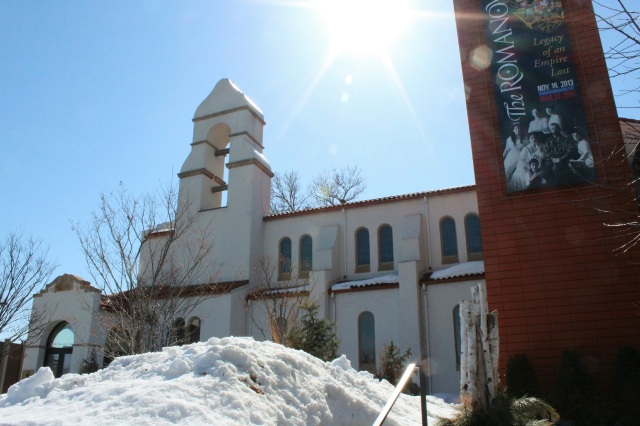 [This is in a residential neighborhood, no parking lot.  So parking is at a premium.  And on this day, the city was trying to find the storm sewer under all the snow and ice piles to start draining off the melt that was creating a small lake in the street.] 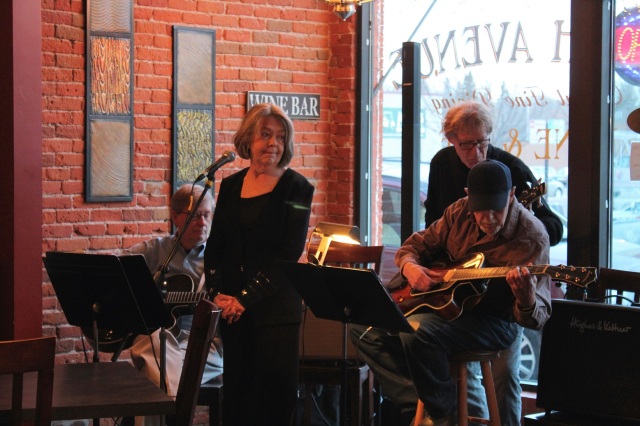 [Then it was back home – with surprisingly good driving – in time to enjoy Terry, Mary Lou, Al, and Mel at SAWA.  🙂 ] 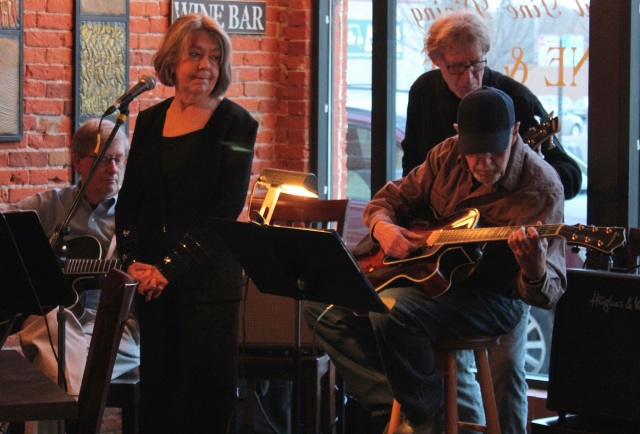 [Late daylight, sunshine, it was time for the first round of the year of New Age, a white, light summer wine from Argentina you drink over ice.]

[At twilight time, the boys go into overdrive!] 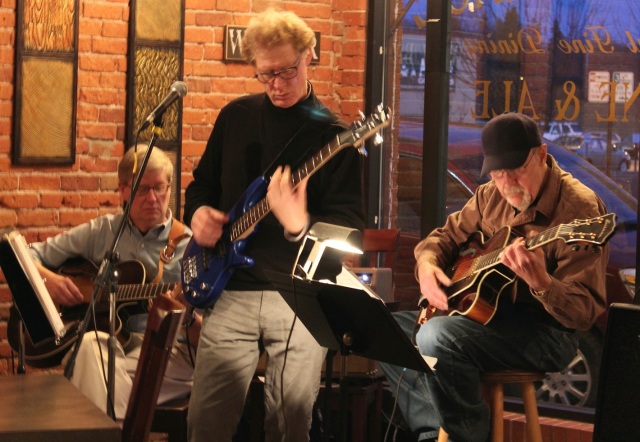 [Seriously engaged in their work.] 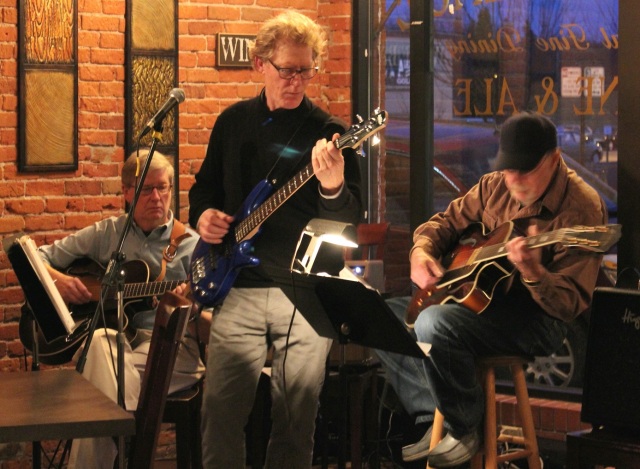 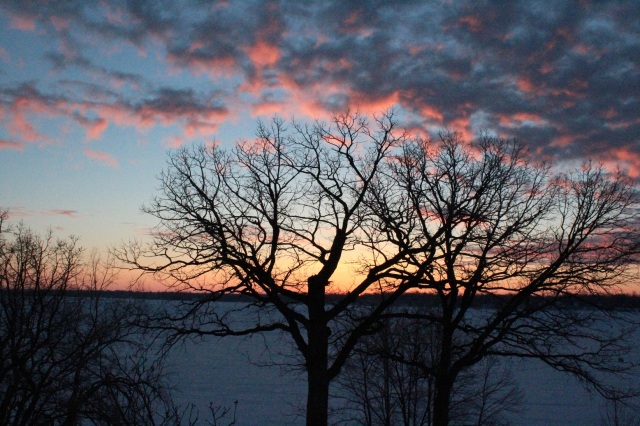 [Well, it looks like we’re back to the music scene.  Remember this, the “fake” sun?  Well, it was March 8th, before the state tournament, but it gets the ball rolling . . .]

[The Salty Dogs, this day composed of Greg, Erik, and Tom.]

And once again, captured performing “Hallelujah”:

[Finally, you can see here they’re preparing the ceiling to install sound buffering material.  That will be a terrific addition!  🙂 ]

[Fiddlin’ Sami was there as well, but she was double gigged that night and had to leave after just a couple of songs.  She was, accordingly, relegated to the balcony!]

[Thanks again to Mikko and the Carlsons.]

As part of the Central Lakes Concert series, the California Guitar Trio + the Montreal Guitar Trio played Alex on Sunday, the 16th, and really blew everyone away! 🙂  Each group played a set individually and then they combined at the end. So, it was a long show . . . but nobody seemed to mind. The songs in the following videos were part of our program:

9-minute documentary on the groups: http://www.youtube.com/watch?v=WCMeNBYB55s

The Good, the Bad, The Ugly: http://www.youtube.com/watch?v=y-1EZY2RLnU

[A quick look at the “state of the season” for the snowbirds.  Last Friday, one of the supervisor’s birdie friends drops by for a snack.]

[Despite some big time melting, the snow is still as high as the railing on our steps down to the lake.]

[Any guesses yet on ice-out on the lakes?]

[And last, but not least, for the first time at the winery we got an “entire” performance from the duo of Anthony Miltich and Debi Kilde.  They performed before an SRO crowd for most of the afternoon.  🙂 ]

[Here’s part of that SRO crowd.  They really seem to be enjoying themselves!] 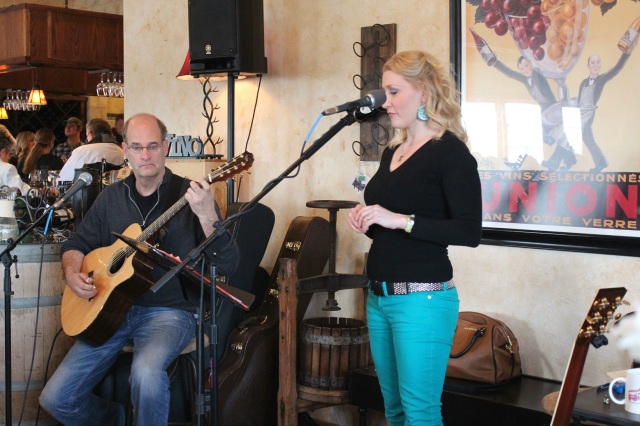 A video:  “Something to Talk About”:

[Three guys who frequent the same barber:  A groupie, a musician, and a musician.] 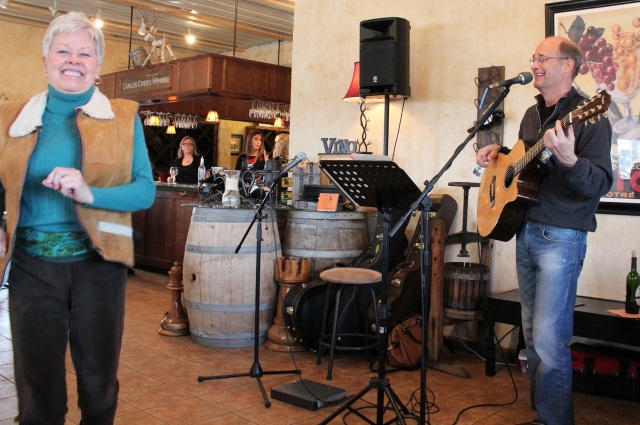 [And say, man, what are you doing here?]

Norwood Teague, still a rather new athletic director at the University of Minnesota by way of Virginia Commonwealth University, was recently interviewed by the StarTribune:

Q What’s one thing about yourself outside the job that people might not know?

A I would rather be in a cold climate than a hot one. And I’m totally serious when I say that.

[The new high school construction, as of a month ago.] 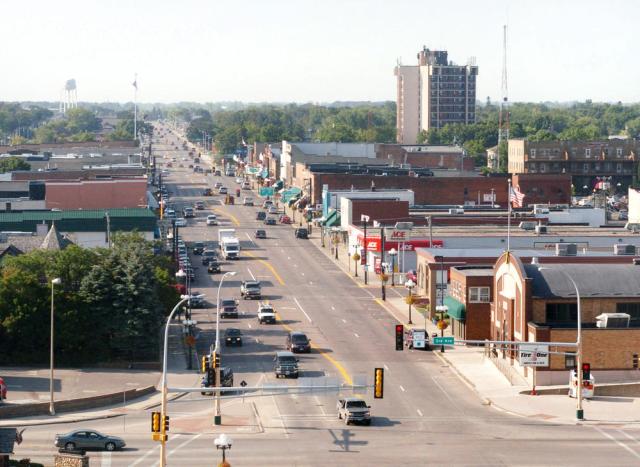 [Remember, the big makeover of Broadway starts in a little over a month!]