Our favorite event of the year.  And our Cards spoil us over it.  This was our 9th trip to state in the last 11 years.  And the supervisor just loves on-line shopping for a new and different hotel to stay when we’re down there.  Plus, lunch at Cossetta’s!  🙂

[Of course we were keeping an eye on our women’s Olympic hockey team, as well.  If you can name the three players in this photo and their import to the preceding sentence, you win a cookie!]

[Well, at least during the years when we come in from this side of the arena.]

[Why haven’t I noticed this before?] 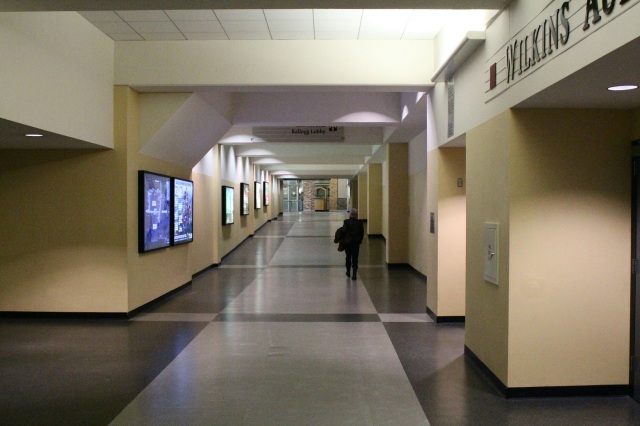 [The supervisor forges ahead through the assembled throngs!] 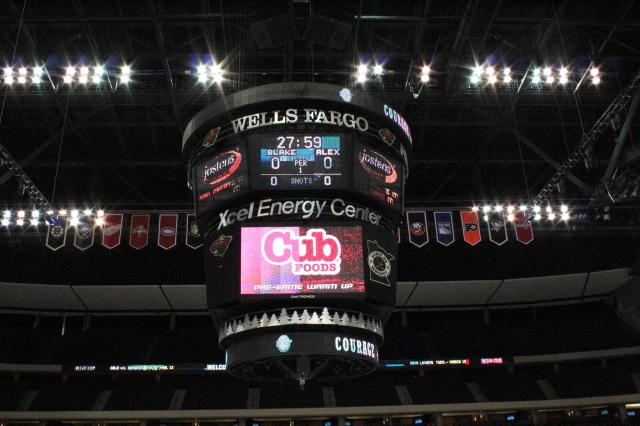 [11 seconds have gone off the scoreboard clock.] 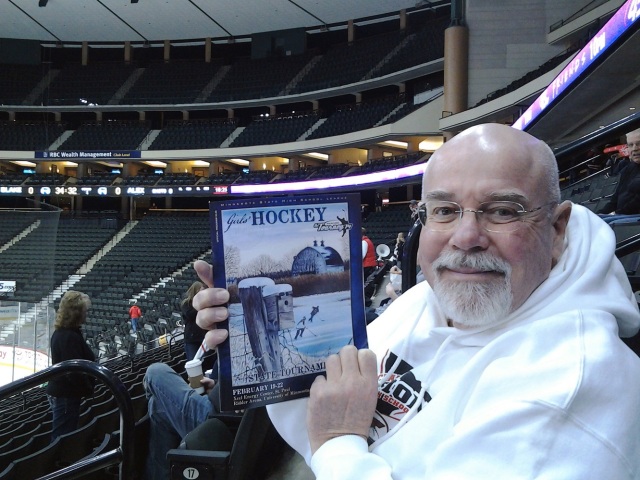 [And here we are.  Mr. Excitement is ready to go!]

[The Cards come out for warm-ups.  Girls’ hockey still does not draw.  We don’t understand that, of course.  So when they play at 11:00 am on a weekday, with a small town outstate school (where bad winter driving weather is now the norm) playing a private school from the Cities in an arena that holds 18,000 people, the less than a thousand that show up for these games get lost in the abyss.  I’d really like to see them hold the entire tournament at Ridder Arena on the U campus.  The 3,400 seating capacity seems far more suitable for this venue.]

[Can you guess the hockey mom?]

[Another hockey mom.  No cheating!] 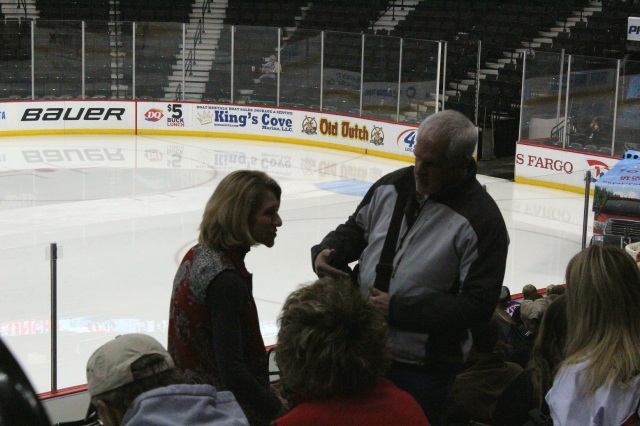 [Another hockey mom, conversing with “the competition.”]

[Students who escaped from school for the day.  I hope they had a note from their mothers!  And more hockey moms – we had a plethora of them!  (I think wearing their daughters’ jerseys to the game assures they get washed.)]

[The Blake School (on the left) meets Alexandria.  Blake was seeded 2nd, but we all knew they were the favorites (a bone, the No. 1 seed, was tossed to a little upnorth school, East Grand Forks).  Alex was unseeded, because our overall record wasn’t that good – but I think we only lost to two class A schools all year (all the other losses, therefore, were against the big, class AA, schools).]

And now a couple of videos for your dining and dancing pleasure:

[Hanah leads off our “stop action” coverage against the dreaded Bears.]

[Cruising through center ice.  Her great grandma called at the end of the tournament to tell us that Hanah has a younger, if a head taller, sister on the U-12 team  🙂 ]

[The first of several collisions involving Mel.  I think they were keeping an eye on her.]

[Didn’t work!  Mel gets our first goal shortly after the Bears’ star, Carly Bullock (22), only a sophomore, had scored.  A state-wide hockey-connected Alexandrian had warned us ahead of time about Bullock.  Based on what I saw, live and on TV, she was the most talented player in the tournament.  She’s already committed to Yale.  And as a sophomore, she was a grizzled veteran on this team which probably could qualify as a U-14 team.] 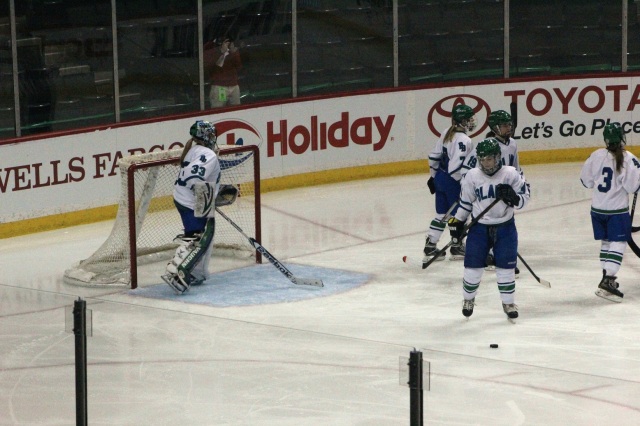 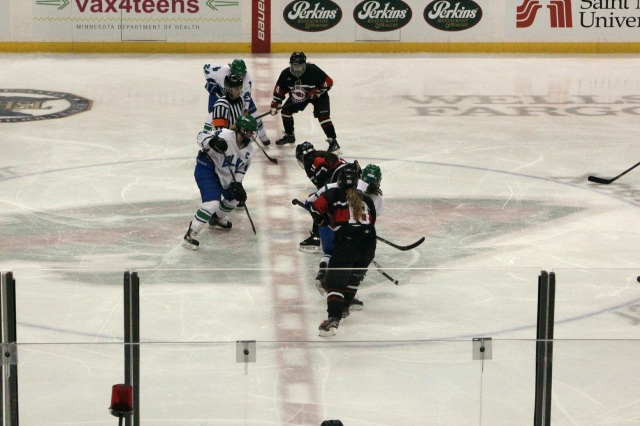 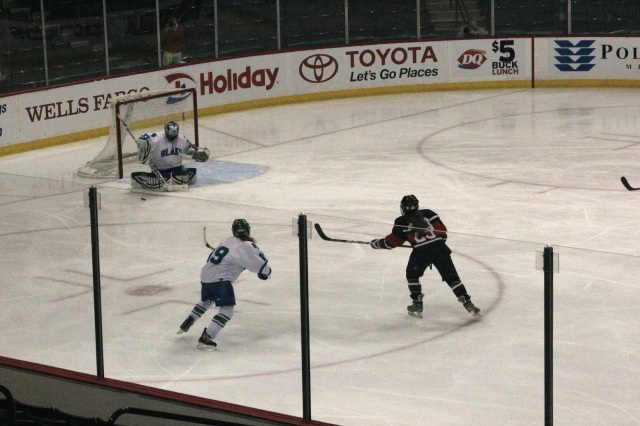 [Hanah tries to keep it in the zone.] 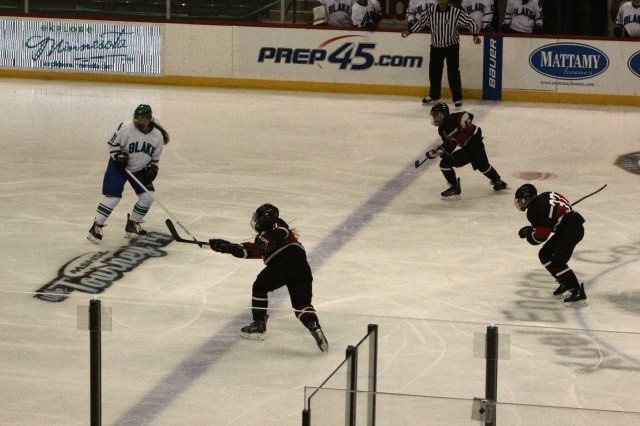 [The Cards shoot it in.]

[But their goalie, who I believe is in elementary school, made a nice stop.  Kids are really flexible at a young age.]

[She holds on while Mel get pummeled again.]

[Rachel takes a stab at it.] 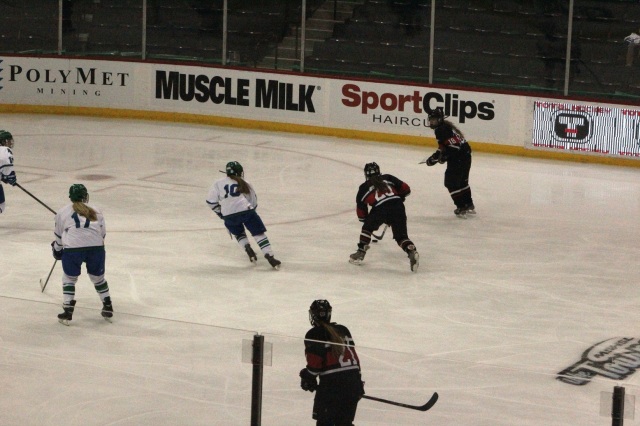 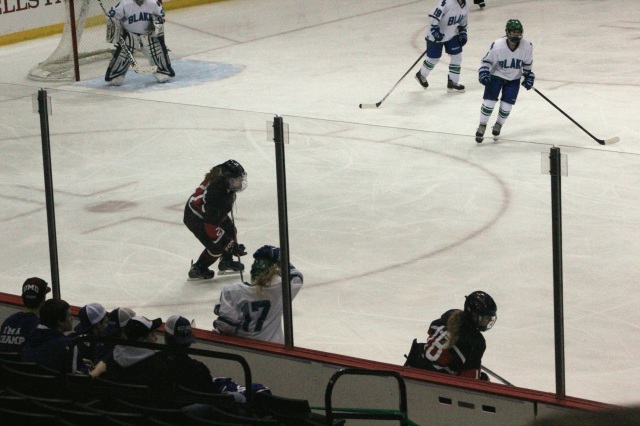 [Mari keeps it in the zone.] 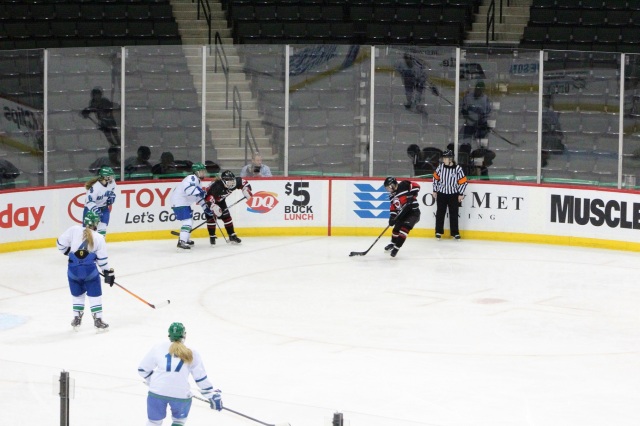 [Rachel watches over a fallen Bear.  Is she hiding the puck?  That’s a penalty.] 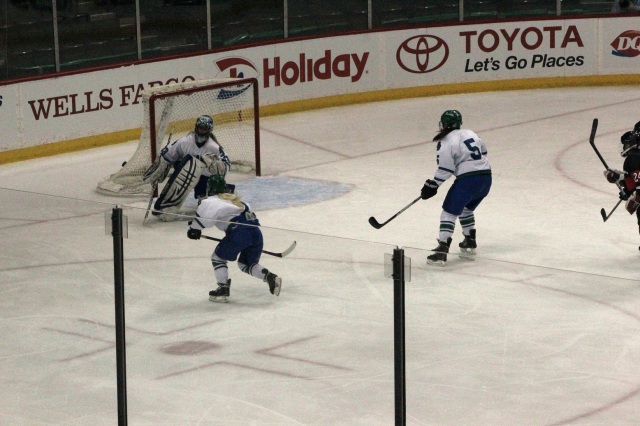 [Taylor and Kaila working in the Bears’ zone.]

[That looks it was Lauren who was carrying it in.]

[Up close and personal.] 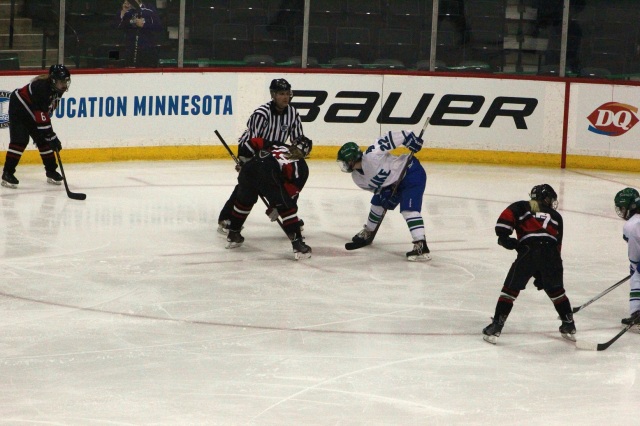 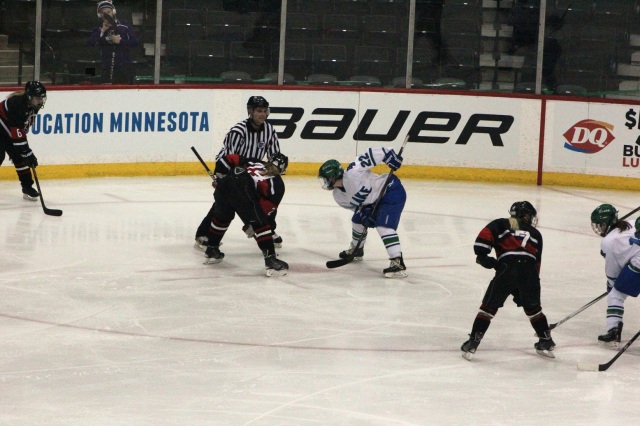 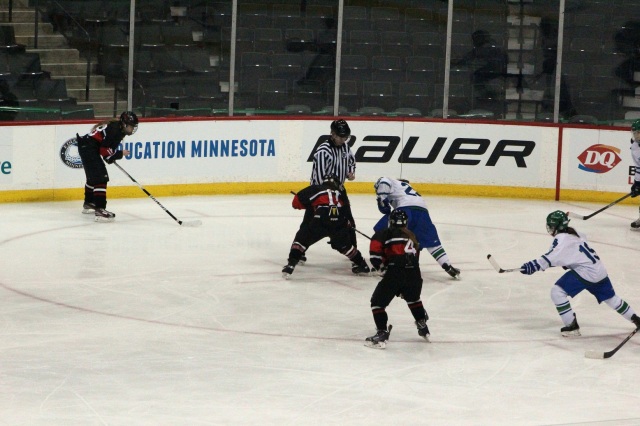 [Mari, Hanah, and Rachel.  This line played very well throughout the tournament.] 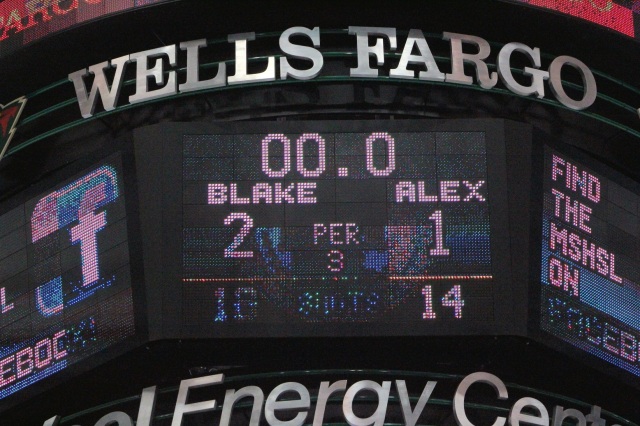 [I think Bullock got their 2nd goal, too.  Not only is she fast, she’s quick and a good stick handler.] 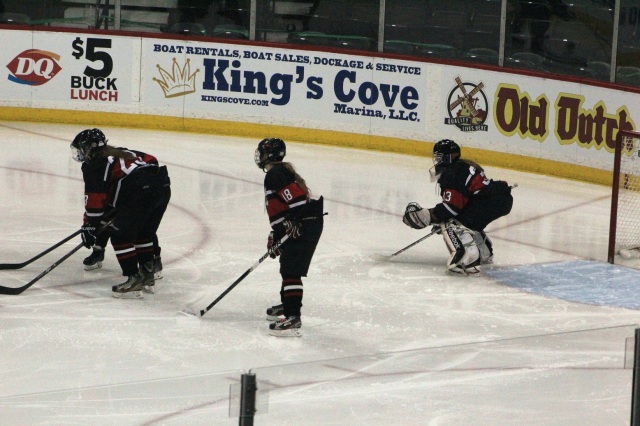 [Amy defends our goal behind her defensive line.]

[Mel with the three little Bears.]

[Whoa, and down goes Drown.]

[Taylor hopes to be screening a shot from the point.] 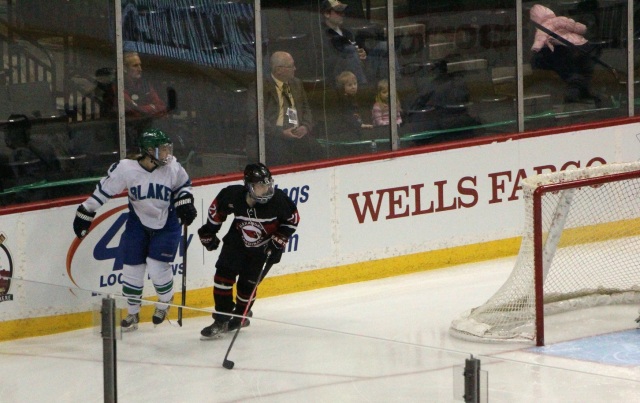 [Mari, in yet another offensive foray that’s swirling back out.]

[GOOOOOAAAALLLL!   Mel gets her 2nd goal to pull us within one in the 3rd period.]

[The ref declares the runner safe.]

[Nope, and we didn’t have many such chances in the 3rd period.  We had spent much of the game (and the rest of tournament) killing penalties.  We had played the Bears even in the 1st two periods, but in the 3rd our tank was empty.  Killing penalties is not only enervating physically, but mentally too.  You can never establish an offensive rhythm.  The Bears held on to their 3 – 2 lead that wasn’t really threatened in the last period.]

[The Bears were defending state champions.  They went on to win it again this year.  A one-goal loss in the 1st game of the tournament to the eventual champion just indicates how competitive the tournament has become.] 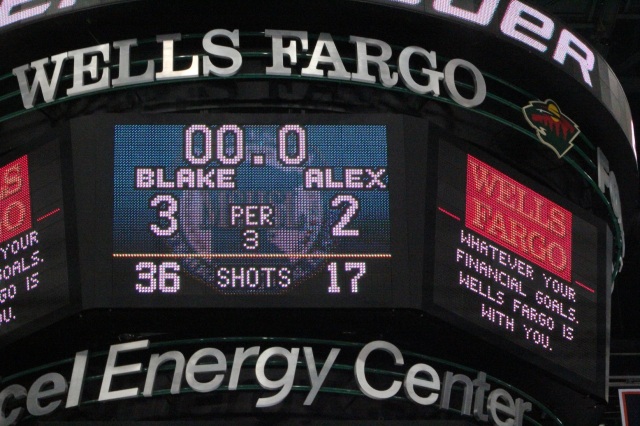 [As I noted in e-mail reports, the shot total is misleading and really stretched out in the 3rd.  The Cards had lots of shots that weren’t on goal.  If we could have stayed out of the penalty box, won some face-offs . . . well, every team can say that.  It was an entertaining game, a good showing by the Cards, but the higher seeded team was better on this night.]

[Ally (10) is an Alex hockey alum, and this was finishing up her senior year at St. Ben’s.  Congrats, Ally!] 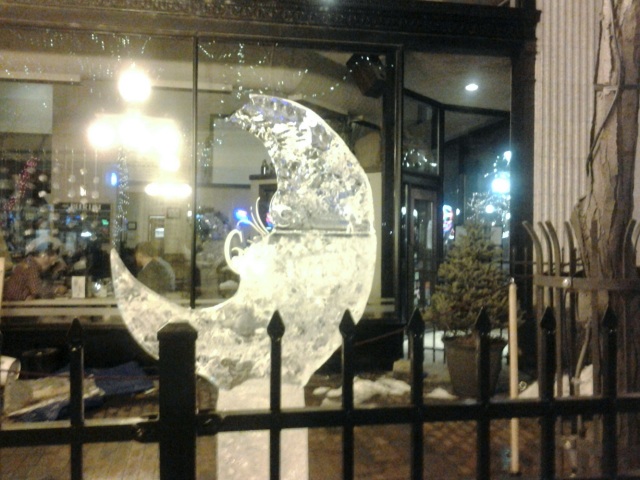 [Cam and Karen came downtown from Mounds View for fine dining after the game . . . I believe it was Great Waters Brewing Company.  The supervisor took some photos of the ice sculptures in the neighborhood.] 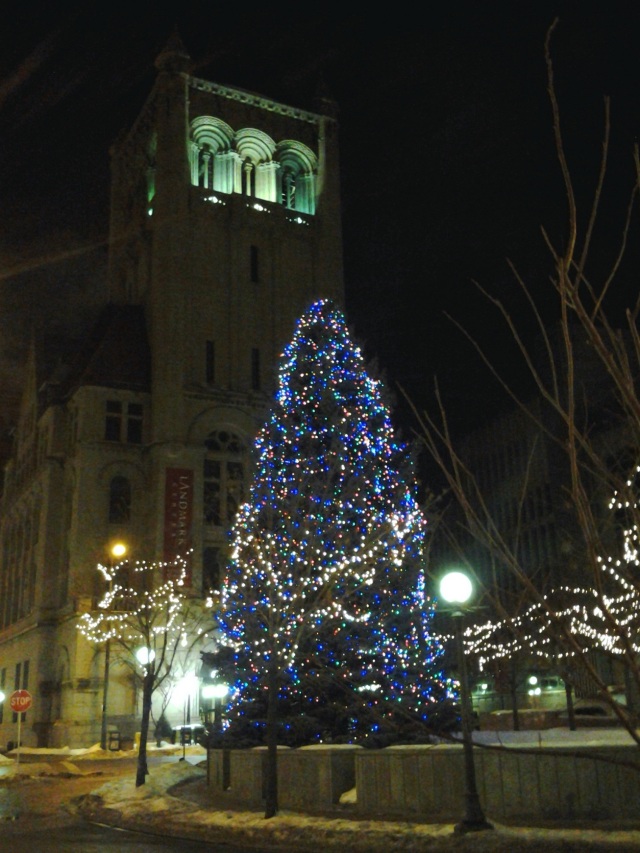 [They sit at the bar and put bread in my jar and say, “Man, what are you doing here?”] 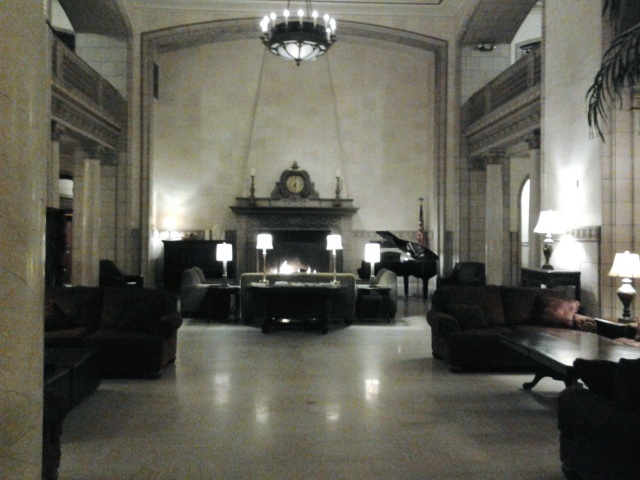 [It’s the same building as the St. Paul Athletic Club.]

[I expected to see some old guys in tuxedos sitting around with brandy snifters and smoking cigars?] 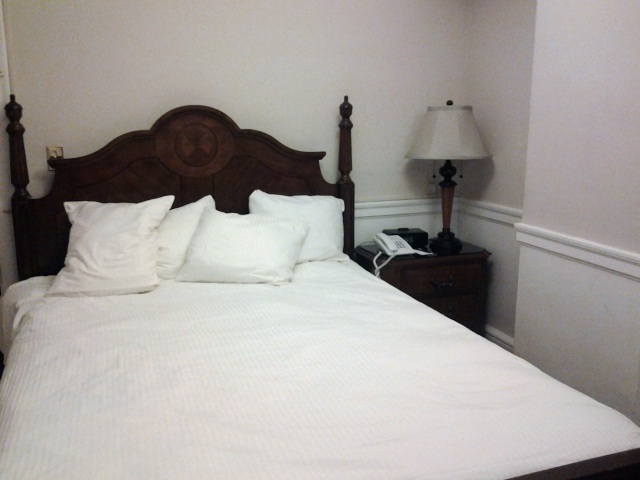 [Detailing the day . . . and in the morning we went around the corner to a little breakfast room where we ran into . . . well, it really is a small world.  Kim and Tami Bredeson from Carlos Creek Winery, who were there for a conference at the Crown Plaza across the street.  The Crown Plaza was full, so . . .]

Up next:  Consolation game against New Ulm at Ridder Arena at the ‘U.’