We Came Home From California and a Hockey Game Broke Out!

Editor’s Note:  It snowed again this Monday morning.  We have been home for five days and have shoveled three times.  Many outside our fair state are probably unaware that there is a little known article in the Minnesota state constitution that mandates snowfall not less often than every other day between the months of November and March.  And we left poor Rita all alone in San Diego, to fend for herself in an area that hasn’t seen a cloud since 1945.  (p.s.  Tuesday morning went out for the paper at 25 degrees below zero – literally more than 100 degrees colder than it was in San Diego when we left there a week ago.  And tonight it’s snowing again as we face another week of sub-zero temps.) 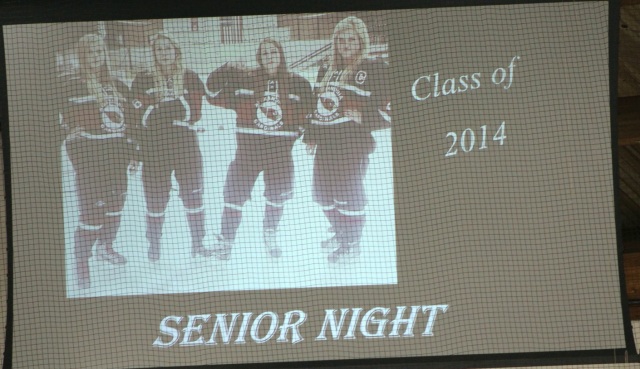 Good to get back in the routine.  We arrived at the RCC to discover it was senior night – that was a nice touch.  But when they introduced and did bios on each of the players, who were joined at center ice by their parents, they were backlit by the spotlight again so we couldn’t see them!  The most touching was Kalley Kragenbring’s, who came back to participate.  Her folks wrote all about her battle with concussions and announced her doctors said her brain was now totally healed as of December 19, 22 months later.  Then her teammates came out and gave her her old jersey No 10.  And here are the seniors: 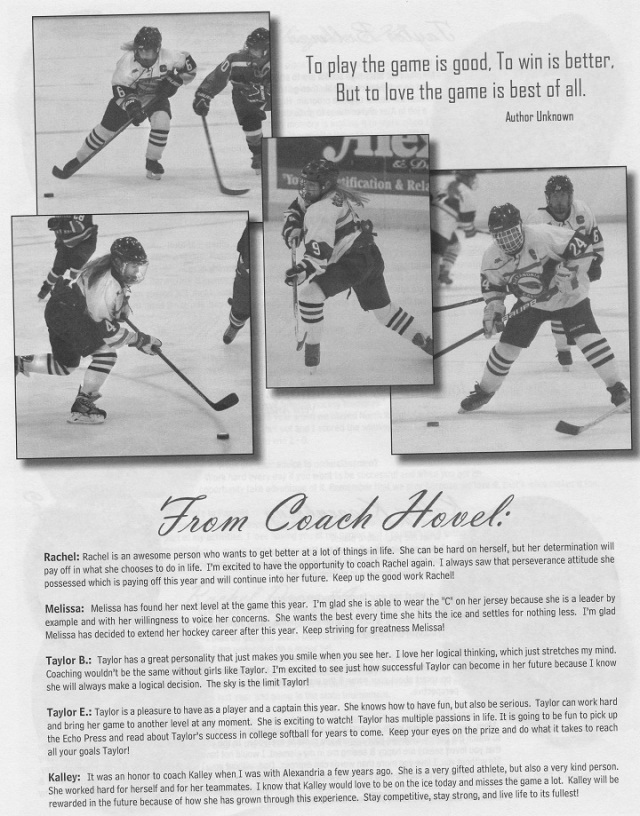 It was also old home week.  As we were walking to our seats, two of the three Toft sisters accosted us!  Alison and one of the twins – I could never tell Andrea or Sara apart unless they were together.  They looked great.  On the way out, we ran into Abby and Martha. Abby’s home for an uncertain length of time.  I asked if she came home because you can’t drink the water in West Virginia (nice touch, Tom!).  They had lots of chili and fixin’s left over from the fundraiser, so we were all invited to the Warming House after the game to partake.  We sat and visited with Abby and Ashley.  Blair gave a little speech thanking all the seniors and their parents.

Oh, the game.  Roger sang the anthem, so I knew we were in good shape.  The PA was amped up a bit, or somthin’.  We told him he sounded his best ever.  🙂  He also told us Onna will have surgery, but it’s not as bad as expected – not an ACL.  And she could be back this year (though only a couple games left?).]

[This always reminds me of “March of the Penquins.”  After player introductions, they all go back to the goal and are somehow able to find their own hats?] 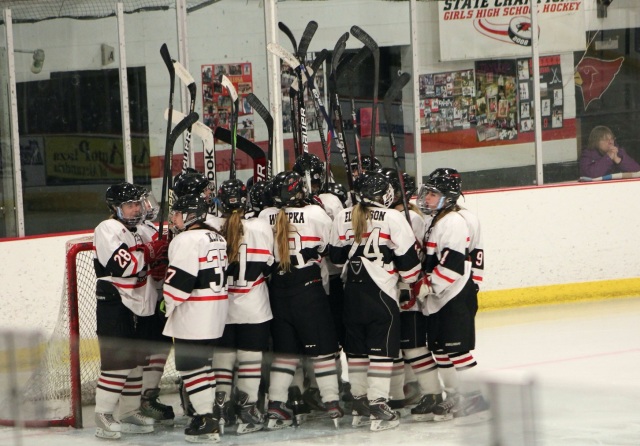 Pequot came in a couple games under .500, but they had beaten Fergus and only lost by one goal to River Lakes; plus their good goalie, now a senior, was back so they weren’t chopped liver.  The seniors all started, of course, so Taylor E was introduced starting on defense – and she stayed there all game.  She had played on D a few games earlier, too. After the game, Ashley reminded that Taylor had started on D before moving to center – I remembered that and also that Mel started on D before moving to forward.  With that change, Nicole was moved to forward.  I told Ashley I like both those moves – Taylor gives us a strong, fast, and experienced defenseman who can carry the puck out, and Nicole with her length and moves can always get deep into the offensive zone, as she did many times in this game.  And there were other line reorganizations – Mel was out with Micaela and Kaila – hey, whatever works!

[I actually caught the penalty as Pequot’s 28 slashes Lauren . . .]

[Just 7 seconds into the game.]

Pequot got a penalty 7 seconds into the game – don’t ever think I’ve seen one that fast before – and Mel scored on the power play.  And you know the drill – “If Mel scores one goal, she always scores two!”  And she did, in the 3rd.  In the 2nd, Karina, Nicole, and Kaila scored.  Bailey looked really good in goal.  A solid 5 – 1 win. 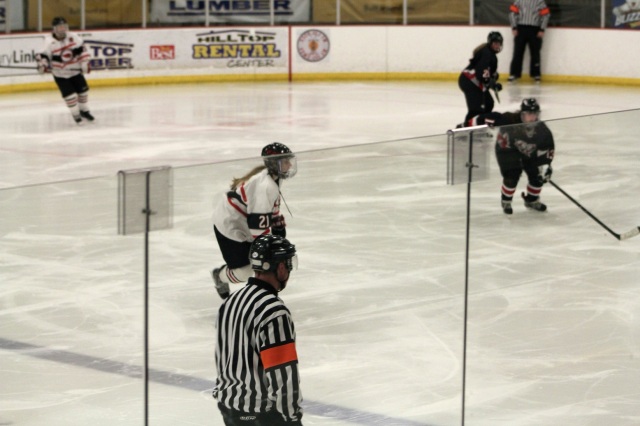 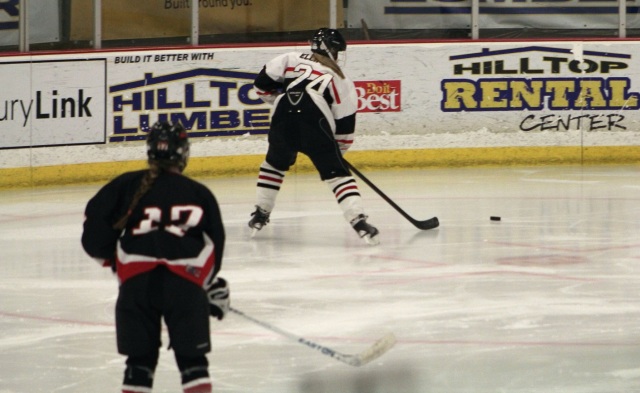 [And Melissa got the power play goal!]

[Kaila and Little Rev try to look good in front of their teammates.] 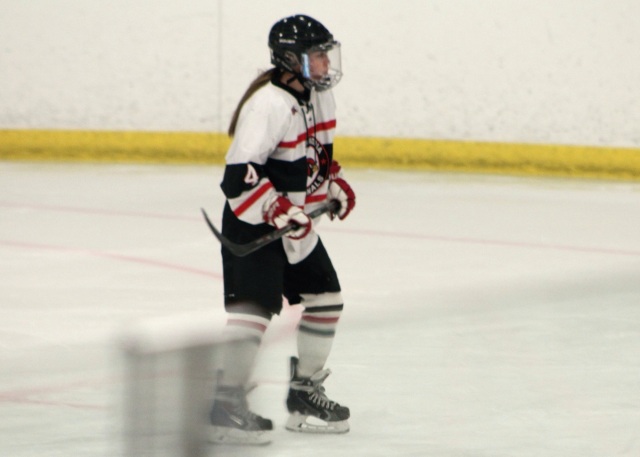 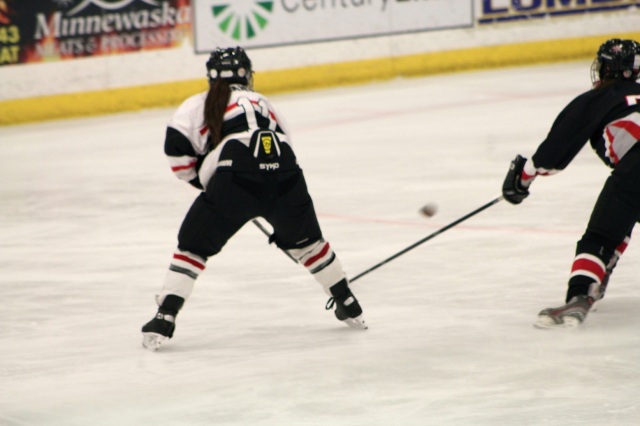 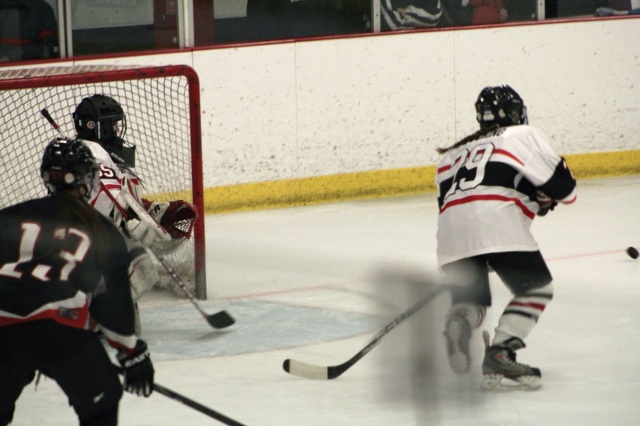 [Little Rev goes for the clear.] 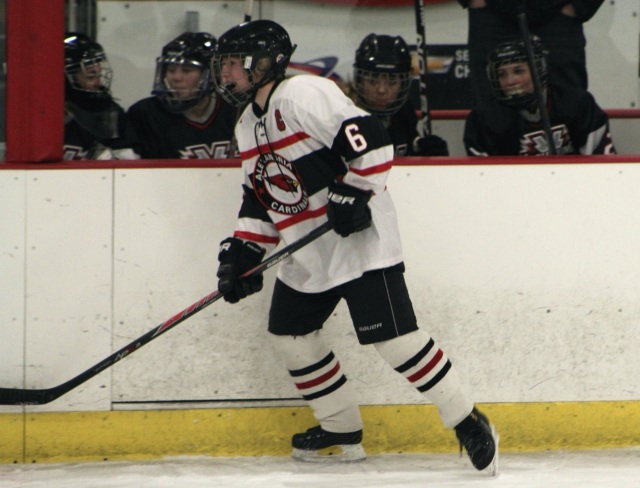 [But now she comes in with another shot attempt . . .]

[And she’s brought down by a three-player posse of Pequots!] 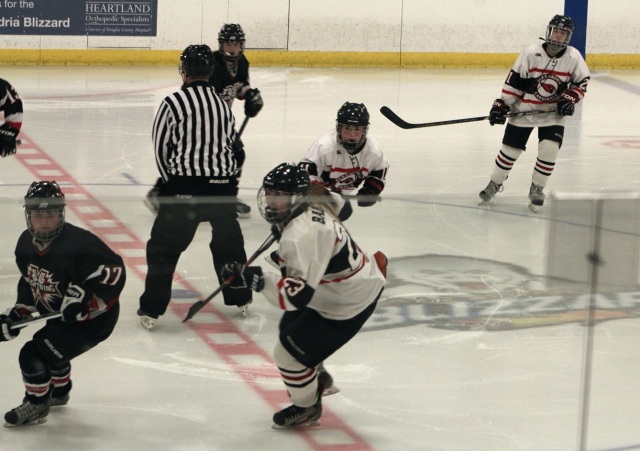 [Obviously the next step after the preceding photo.  🙂 ]

[The Pequot goalie throws a glove at a shot by Nicole.]

[Nicole keeps after it.]

[This has to be Karina’s goal?]

[It’s always tough to be  goalie.]

[Hanah takes a draw with Taylor on her left point.]

[Kaila and Mel in their new line combination.]

[Little Rev and Nicole in a Texas two-step?]

[Nicole tracking the puck in the offensive zone.] 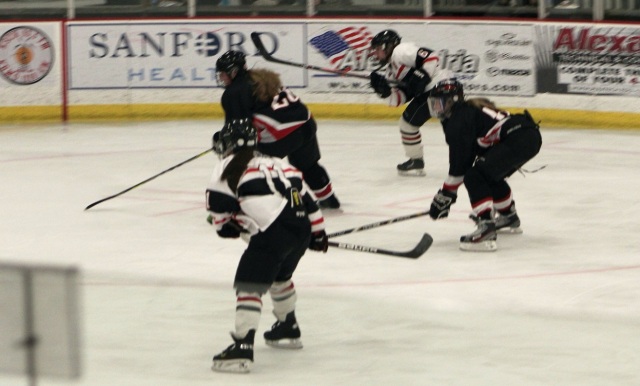 [A sharp angle wrister by Mel as Hanah closes in.]

[Swarming the goal – which reminds me that beekeeping is on the rise in Minnesota.] 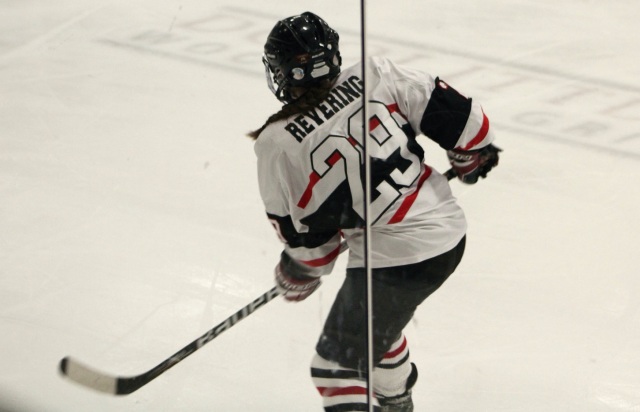 [After 2 – the shots on goal were under “technical difficulty” all game.] 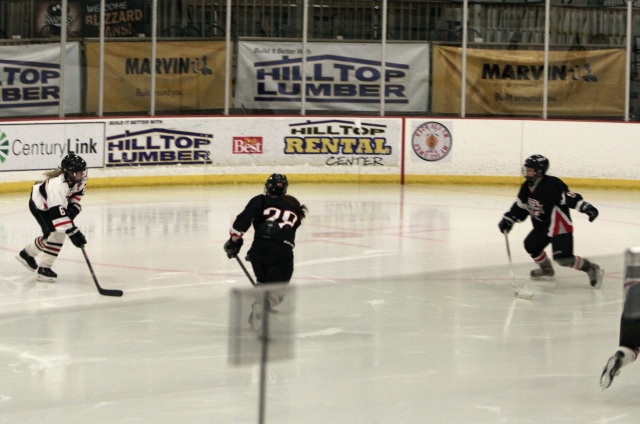 [Mel lining up another shot.] 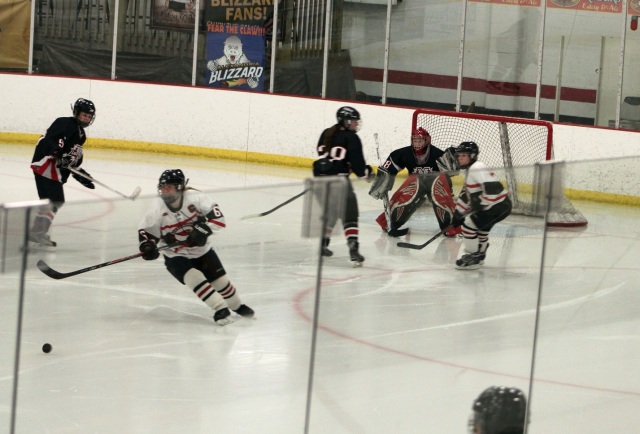 [She spins after the puck.]

[Is that a puck in the back of the net?]

[Under the Homestead Act of 1862, Hanah decided to move in and claim the northeast quarter of the rink.] 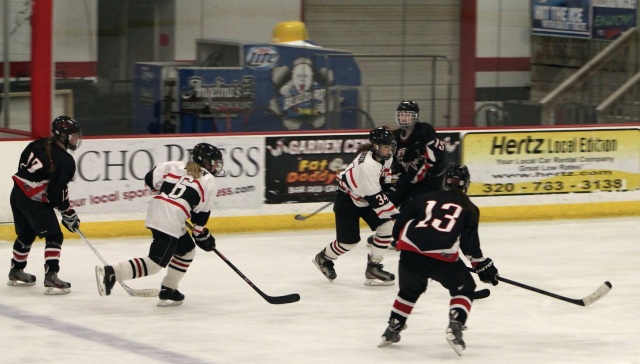 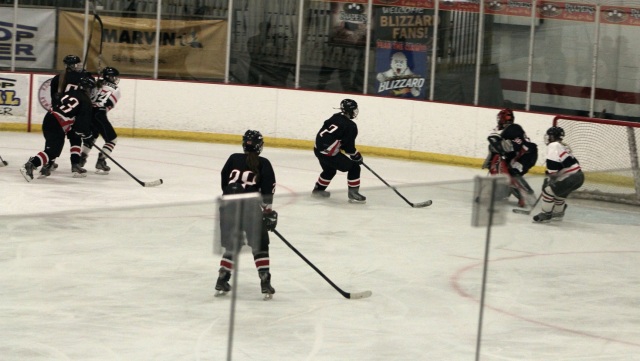 [Hey, we have a Cardinal at the back door!]

[Ooooh, close but no cigar.  Oooops, there’s “no smooooooo-king” in the RCC.] 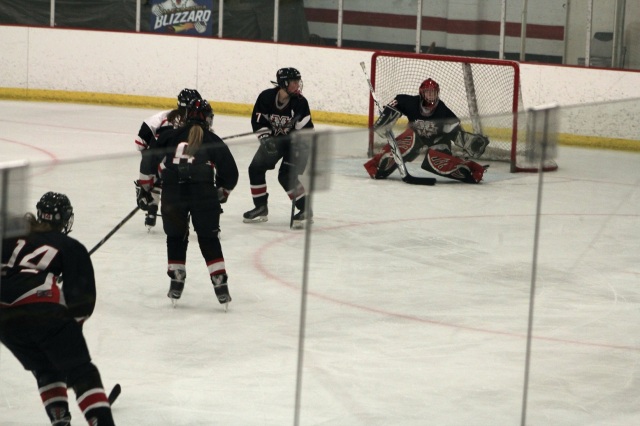 [We have a stealth Cardinal in their midst.]

Up next:  A whole lot of California to do, so don’t be surprised if you enter for this post and see others “under construction.”