[I’m “assembling” this on Sunday morning, November 24.  I received this from Brother Cam in Mounds View a few minutes ago.  I don’t think he likes it.  He recently came home from two weeks in Ft. Myers.  🙂  And here, it appears beautiful Lake Darling is totally frozen over now.  Not a surprise though – it happens every year.]

[Hang in there . . . we’ll get to the hockey game anon.  But last Saturday marked the 10th anniversary (though we believe the actual anniversary of the annual event is in the 30-somethings) since this photo was taken by one of the attendees.  I still can’t do “this.”  But the regular characters still show up.]

[This is actually from last weekend’s event.  Basketball Dan hosts a myriad of past fellow  ‘U’ alums and academics at St. Thomas to a full-blown Thanksgiving dinner, with all the fixin’s.  🙂 ] 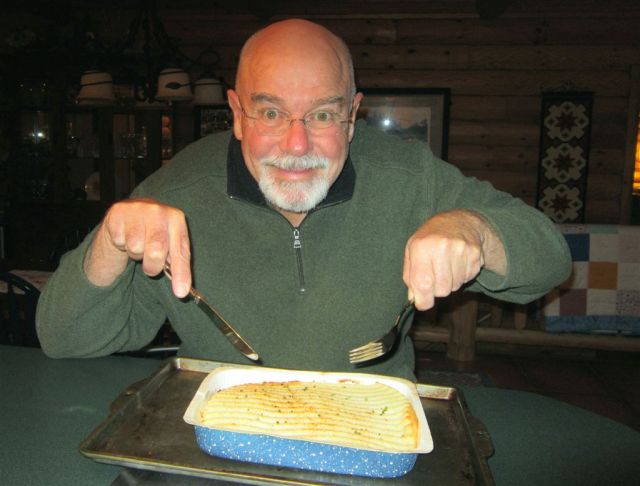 [Continuing our emphasis on food, later in the week enjoying shepherd’s pie, legally obtained for us by fellow gourmand, “Weakie”.]

[The two Toms were there with a bunch of co-eds!  🙂  (Photo by someone with a smart phone.)]

[Then showed our all-time favorite athlete how to take our class photo.  Abby is leaving us soon – fleeing beyond the confines of Minnesota’s comfortable borders.]

Oh, the hockey game on Thursday night . . . our Cards, the successors to the above photoed Ms. Williams, lost a close one to the River Lakes Stars.  Size matters (yes, David won but only because Goliath zigged when he should have zagged).  And experience matters.  The Stars had a decided advantage in each category.  While our Cards got off to good starts in both the 1st and 3rd periods, for most of the game the Stars dictated the play.  They effectively back and fore-checked all game long.  The Cards were always forced to the outside, along the boards, whenever we entered the offensive zone, and we were seldom able to establish a player in the slot for passes or rebounds.  The bigger Stars just roared down center ice against us and always seemed to have someone positioned at the goal.  Looking back, I think the Cards did good to be able to get the game into overtime.  The Stars won shortly into that extra period, on a power play that carried over from the 3rd period, on a shot that appeared to deflect off one of our defender’s skates – goalie Amy Jost really had no play on it. 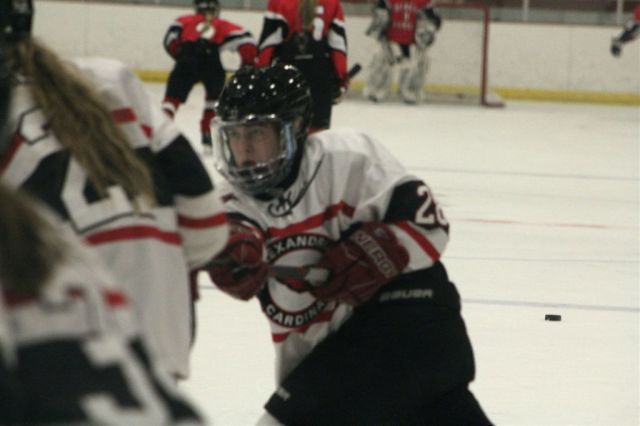 [We finally ran into new assistant coach, Ashley Secord-Holmes, before the start of the game and had a mini-reunion with her.  🙂  So, as long as I was there, I decided to do my pre-game photography from behind the goal.  It somehow seemed prescient that my first photo was of sophomore McKenna Schroeder (28) because during the game her mom came over and asked the Super Fans if we still wanted to sponsor a Puck Shoot – and, of course, we did.]

Now some videos to give you an idea of what a goalie sees.  The first one is of the initial warm-up and then the serious shooting begins in the second one:

Wasn’t that fun?  Try getting me in a goal!

[A little better look at McKenna.] 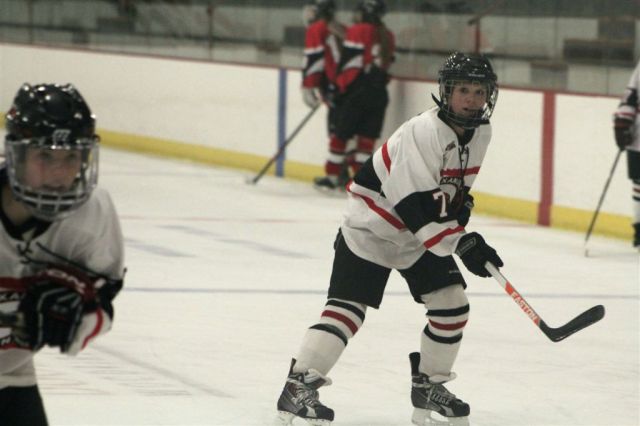 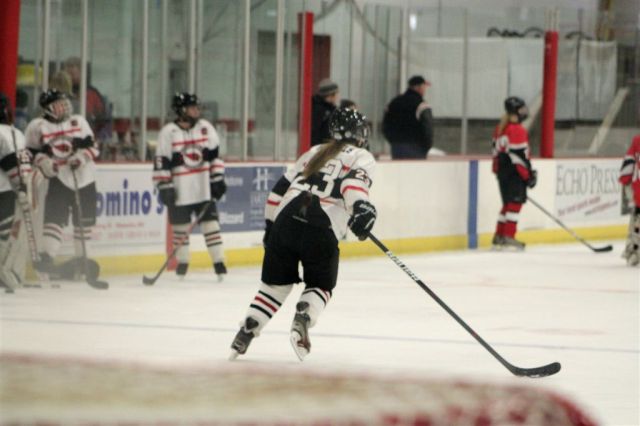 [We noticed from the first time we saw her with the varsity . . .]

[That Niciole just kind of floats around the ice . . .] 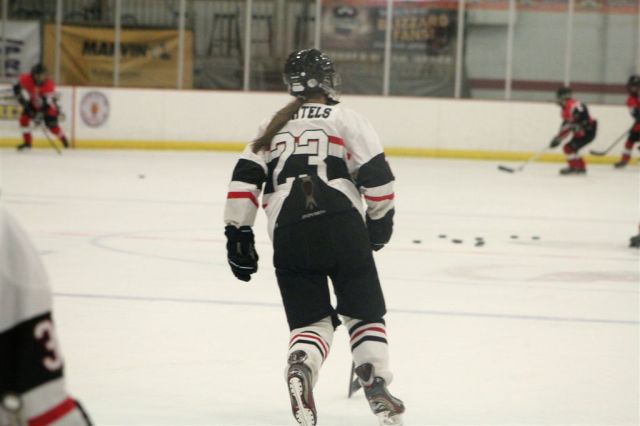 [And here’s McKenna again – her mom reminded just look for her white skates.] 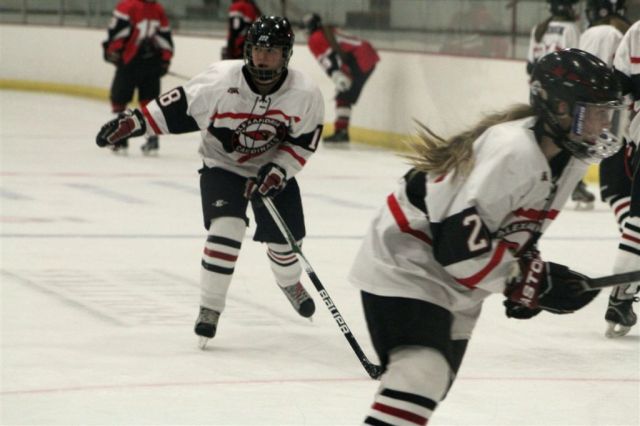 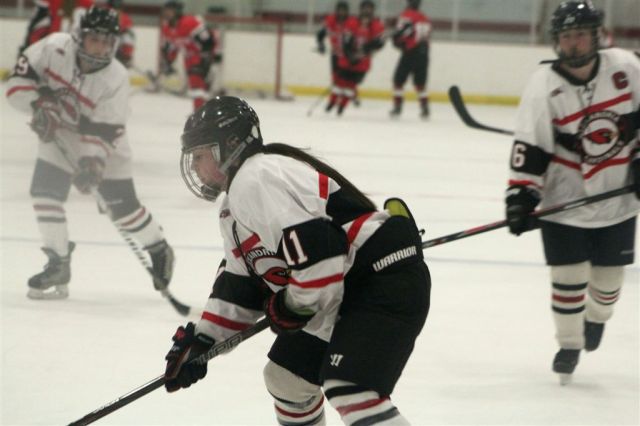 [My goodness, by random shooting we found McKenna again.]

[Bob notes that there’s ice down there!] 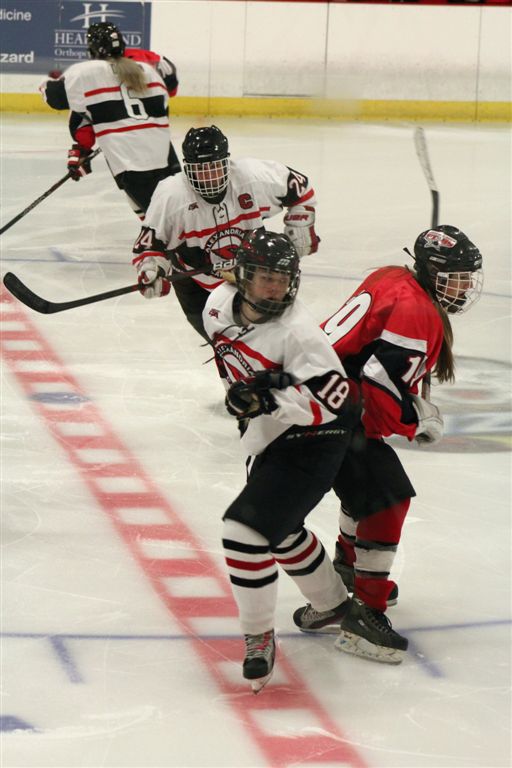 [And we have the opening jump ball with Mari, Taylor, and Mel on the front line.]

[Mari chases into the Stars zone.]

[Taylor keeps it in.]

[I think it dribbled in here.]

[The supervisor jumped up to applaud the goal and partly obstructed my shot.  But that’s just showing good enthusiasm! 😉 ]

[And we’re back down in the Stars end again with Micaela Swenson (34).] 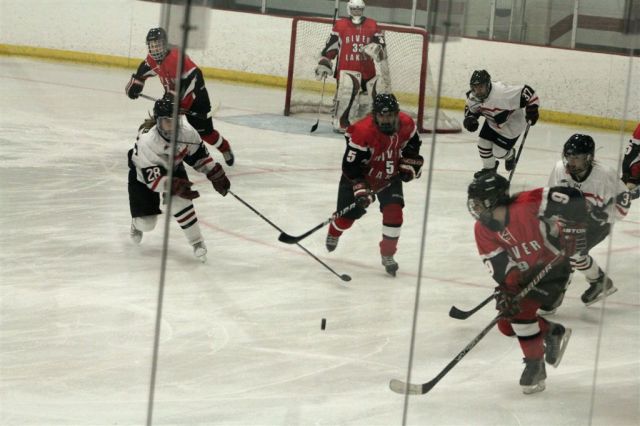 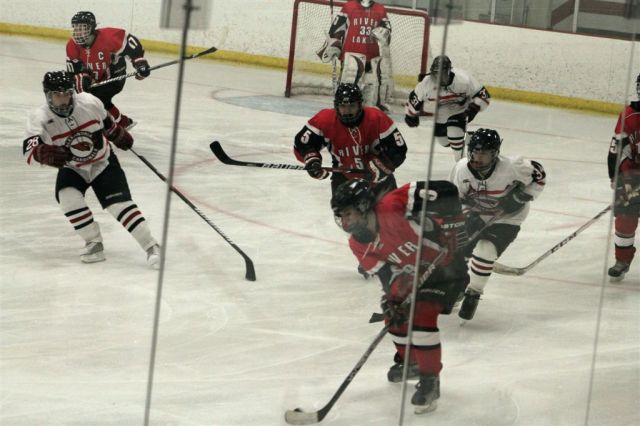 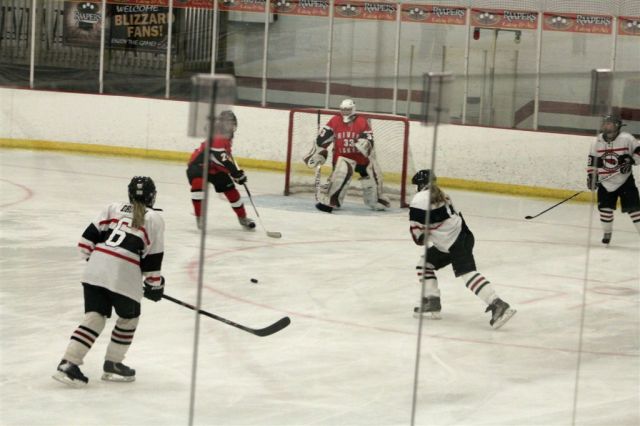 [We’re still keeping up good pressure early in the game.] 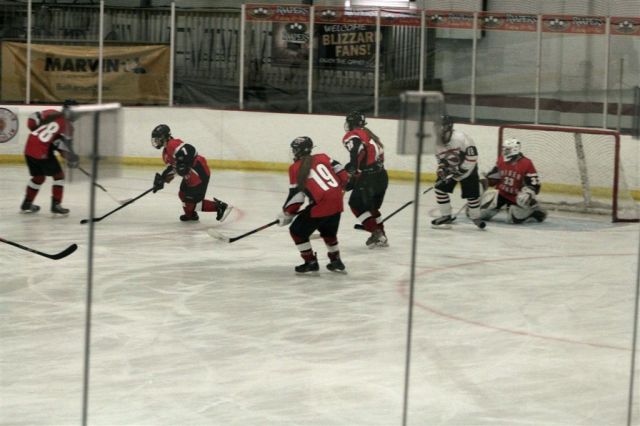 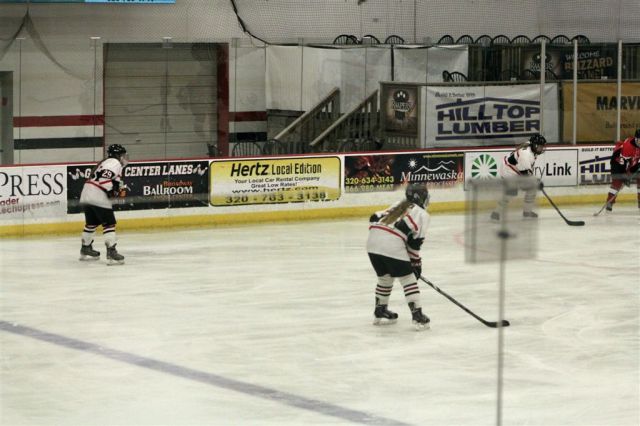 [The Wunderkinds, Lauren and Little Rev.] 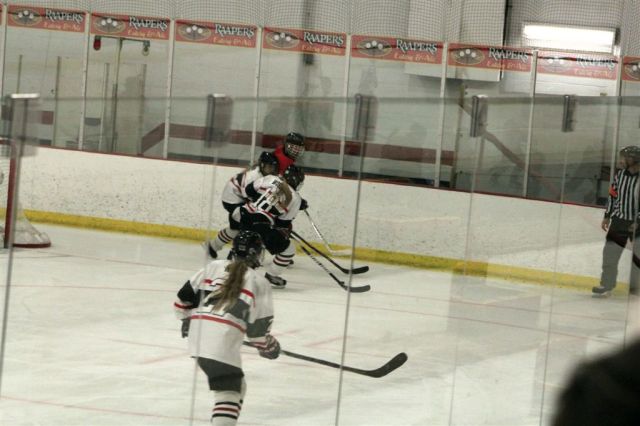 [Then is joined by friends.] 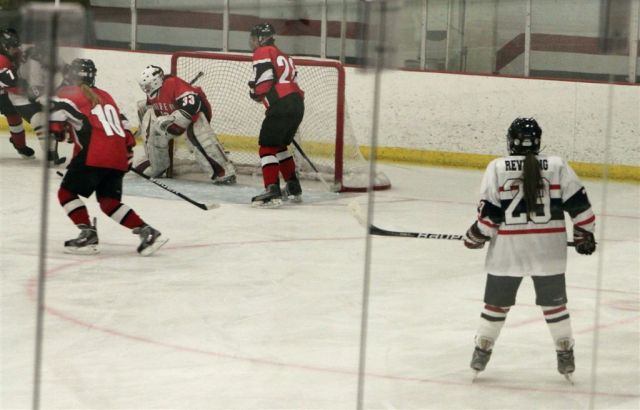 The Stars started turning the tide later in the 1st period, they scored a tying goal, and then got another late to take a 2 – 1 lead.  The 2nd period was scoreless with the Stars again having the slight edge in play . . . 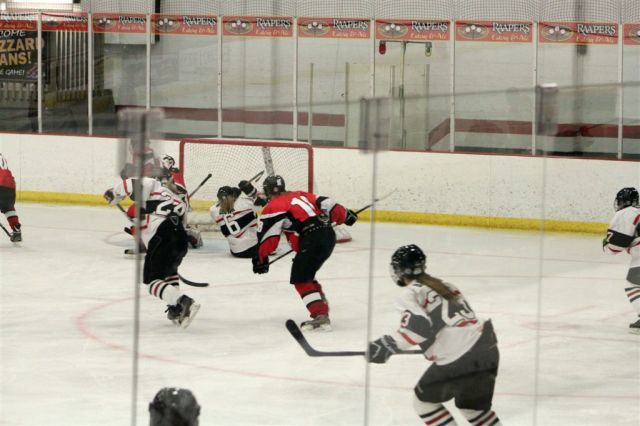 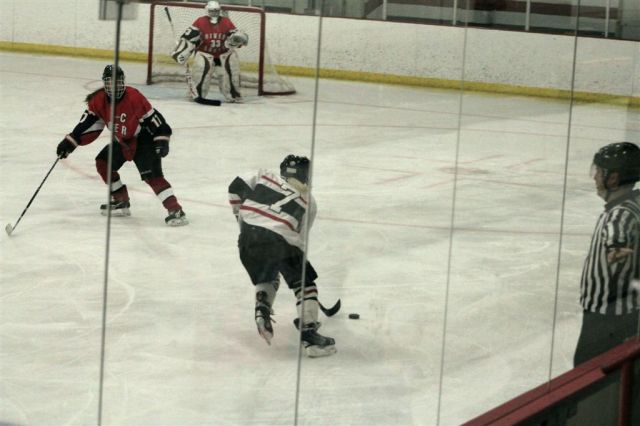 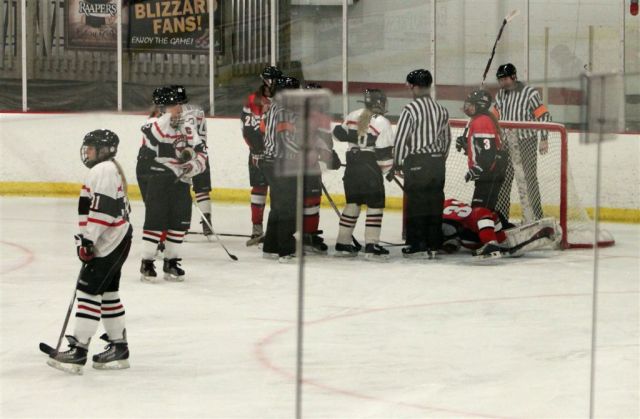 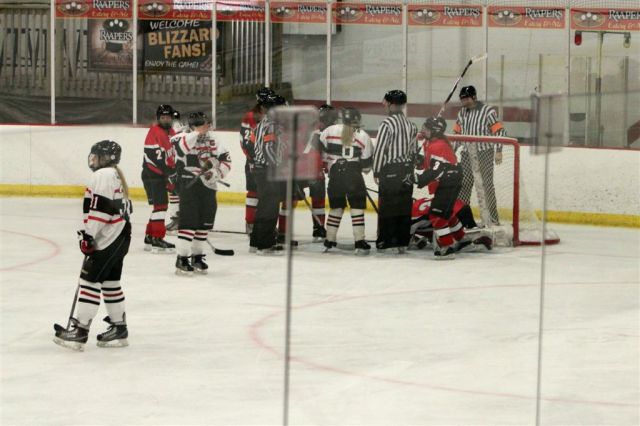 [We still didn’t score.  Hanah looks toward the bench for advice.] 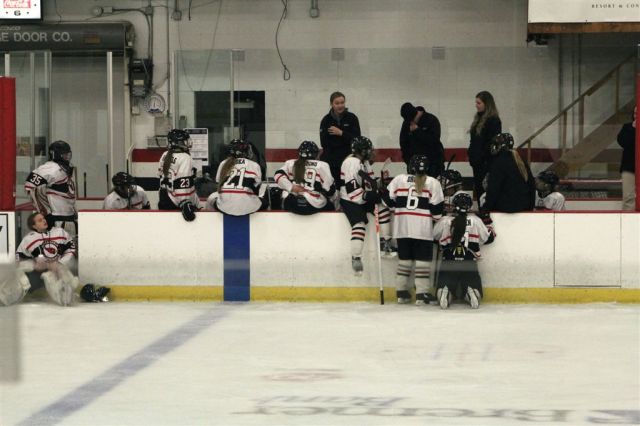 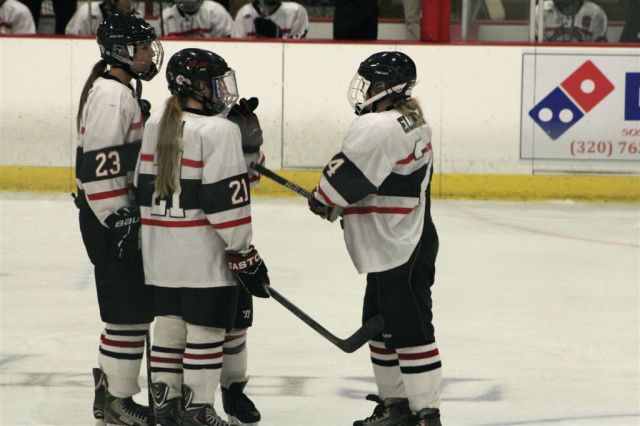 [Pedal to the metal, ladies!]

Despite the loss the Cards are still off to a terrific 4 – 1 start.  Oh, and the JV won by shut out and are looking better each game.  They really dominated in the 3rd period.

And now it’s time to go to where the Wild Things are:

[The supervisor feeds squirrels at this time of year . . .]

[The varmints are so brazen they come up on the decks and knock on the doors!] 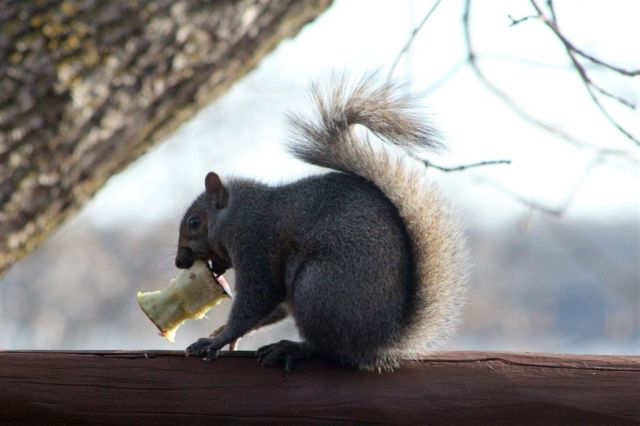 [They were up paying a visit on Friday.  So, I ate an apple and put the core just outside the door . . .] 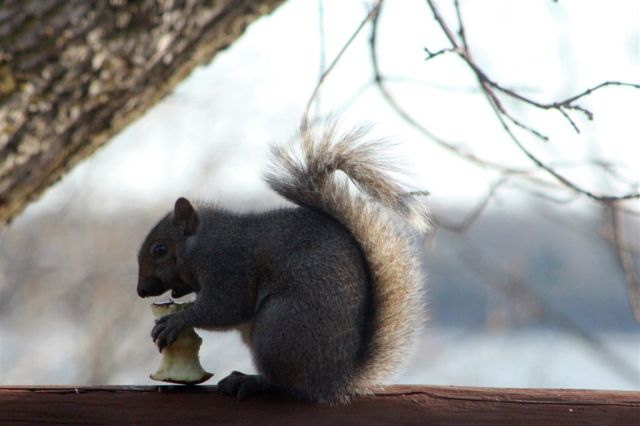 [They came back up, found it immediately, and hopped up on the railing for some fine dining.]

[Then the supervisor said the eagles were in our lakeside trees . . . you can see one fuzzily in the distance as our squirrel sat frozen.] 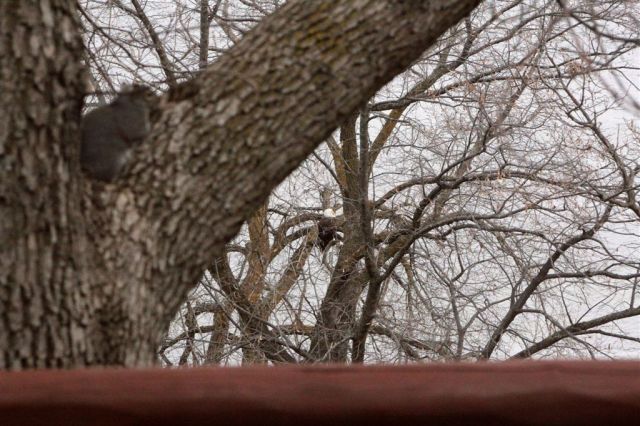 [There was another squirrel in the tree just below this one.  Neither of them moved again until the eagles were gone . . .] 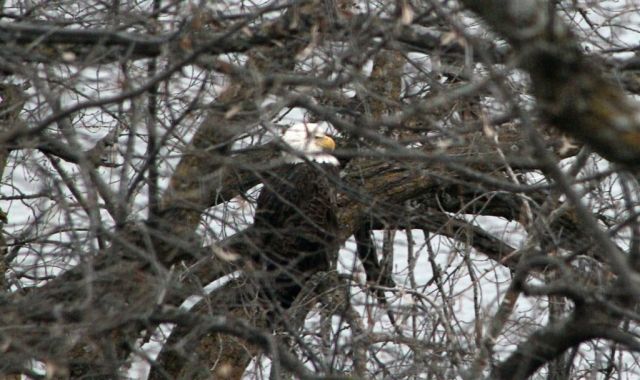 [The eagle I had the better shot at (fewer branches in the way) would never give me a profile.]

Then we went to a place where even Wilder Things were:

[To where people who were alive in the 60’s were!  Dressed in garb they believe represented the attire of the day (for hippies), they gathered on the 50th anniversary of the Kennedy assassination as participants in the development of “The 60’s: Sex, Drugs, and Rock & Roll” curricula for the adult education program.]

[Part of the strategy was to consume vast quantities of the popular hors d’oeuvres of the day, to include, in no particular order: cheese fondue, cheese out of a can on Ritz crackers topped by black olives, deviled eggs, salmon ball and crackers, chips and onion dip, Bugles, assorted nuts, and, of course, Boone’s Farm beverages . . .]

[Then driving by Lake Cowdry on the way home.  It’s beginning to look a lot like winter.]

[Then it was on to the winery where Josie Nelson would save the day.  Here she is under the scrutiny of a young neighbor . . . and fan!]

[We had to chuckle when patrons would go up to buy her CD and/or get an autograph . . . in the middle of her set!!  There were lots of folks there for the first two hours – mostly groups of women.  We figured the men folk were either hunting or home watching the Gophers (biggest crowd ever at “The Bank” along with the coldest weather in the stadium’s 5-year history).] 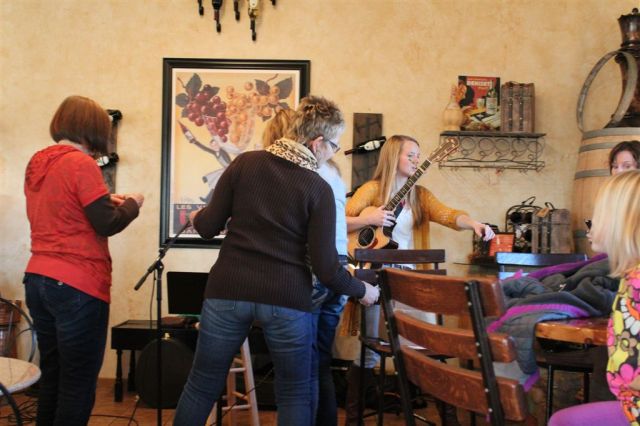 [Help, Mom!?   When the crowds left, it was about as quiet as it ever gets in there.  I took the opportunity to take four videos of Josie.] 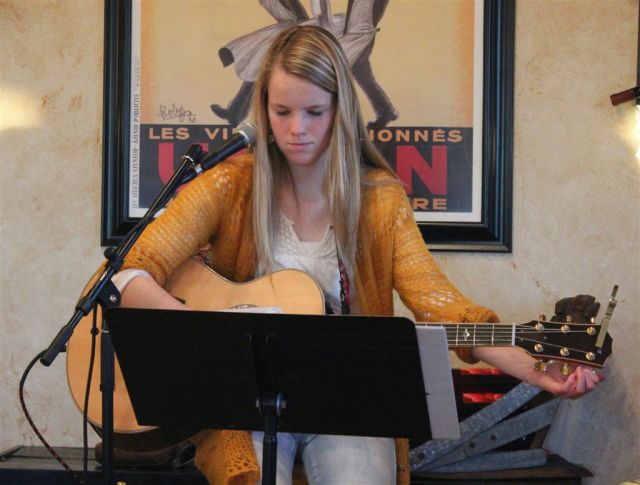 “The Way I Am”:  https://www.youtube.com/watch?v=ZbGuYThcSS4

We’ll conclude this by coming to the end. 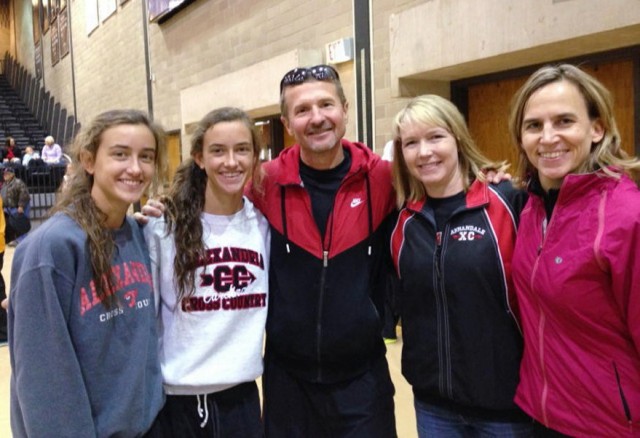 [Cross country coach, Mark Nelsen, is retiring after having been the program’s only coach.  He started in 1980, and when the Hasz sisters (on the left) placed 1st and 2nd in the state meet this year, they and Mark were joined by two runners from his very first team.  Cool! Photo from the Echo.]