The Last Volleyball Game Ever at JHS!

Oh, and we won, 3 – 0 over Detroit Lakes in the section semifinals.  [The final will be Friday in Fergus Falls v. Moorhead.]

[Tuesday night, the team lines up for the last volleyball player introductions ever at the Jefferson High School gymnasium, a facility so old that this reporter played on it when he was the age of these players!  The floor has been replaced, and Dave Harris is a couple generations down the announcer tree from Ray Lang, but it is essentially the same place.  It was on this very floor (well, the original floor) I first discovered I needed glasses.  Because baseball season always began when snow was still on the ground, our initial practices took place in the gym, and I got hit by a ball in a place one does not like to get hit by a ball because I couldn’t see it.  Here everyone is looking to the far end of the court because of another alleged Kim Kardashian sighting.]

[Kinda makes you feel all warm and fuzzy inside, doesn’t it?  😉 ]

Before game commencement, Kohler (the girls’ basketball coach) walked by, noticed us, and stopped for a chat.  Ever the victim of my cub reporter instincts, I asked her to explain the current plethora of terrific girl athletes in our school system?  Without hesitation, she replied, “Coaching!”  That, of course, was the perfect answer.  Ha!  🙂  And now the video to start the game:

[Gretchen leads off our still coverage; Sheree watches nervously from the background.] 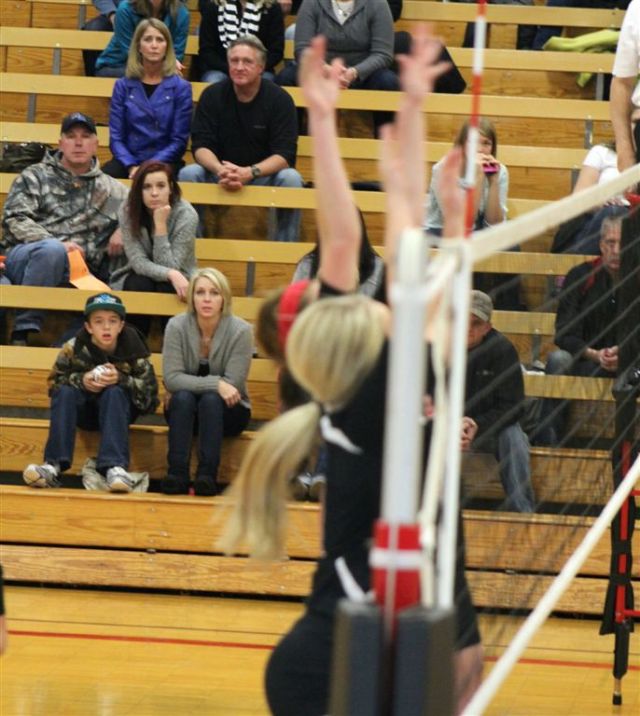 [Amanda H and probably Liz go up for a block.  As noted in the video, the Cards jumped off to a quick early lead.] 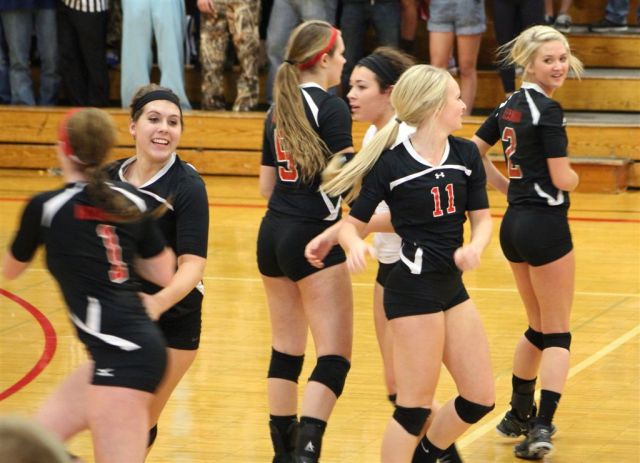 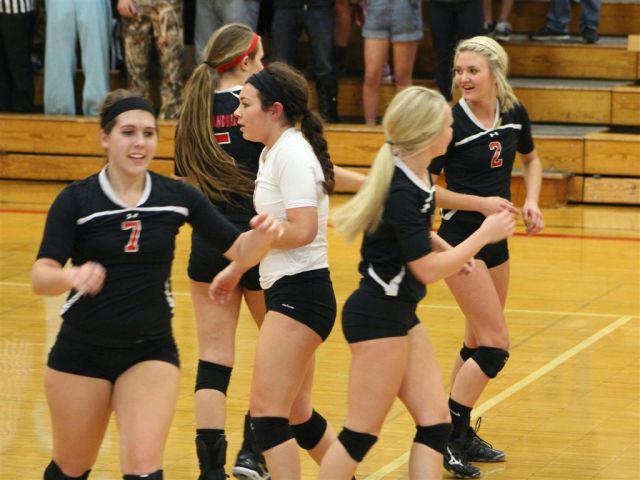 [I’ll cover the vertical if you handle the diagonal?]

[You cannot run a play without the preliminary high five.] 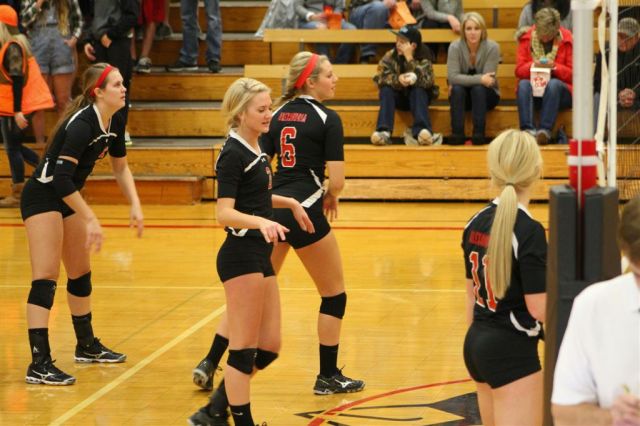 [OK, is everybody finally in their correct place?] 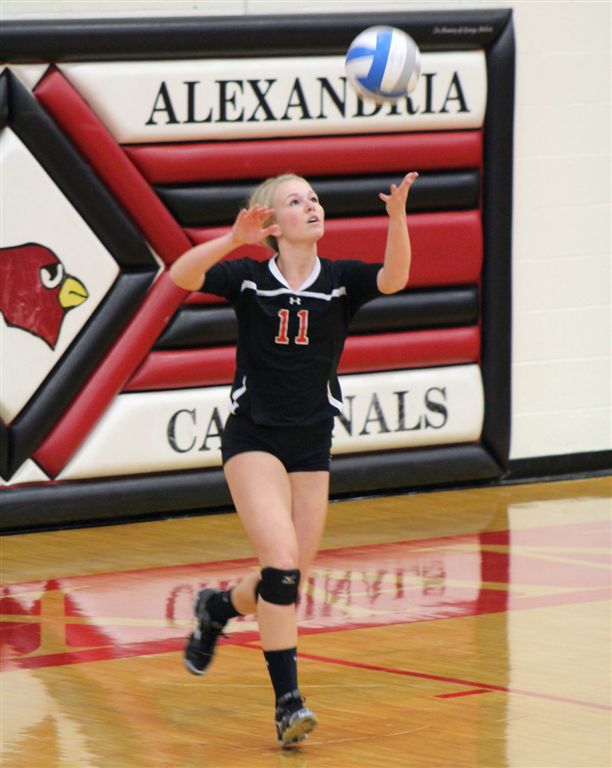 [Amanda does this well, as does Amanda C.  But the team has had issues with serves in the last couple of games . . . it would be nice to get that straightened out as we move up the competition chain.] 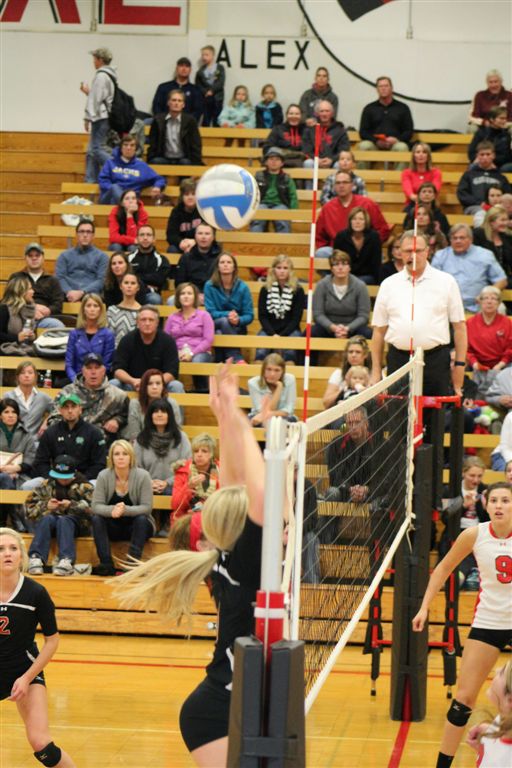 [The ball flies high as the Cards attempt a block.]

[It must have flown high and long as there was cause for celebration!] 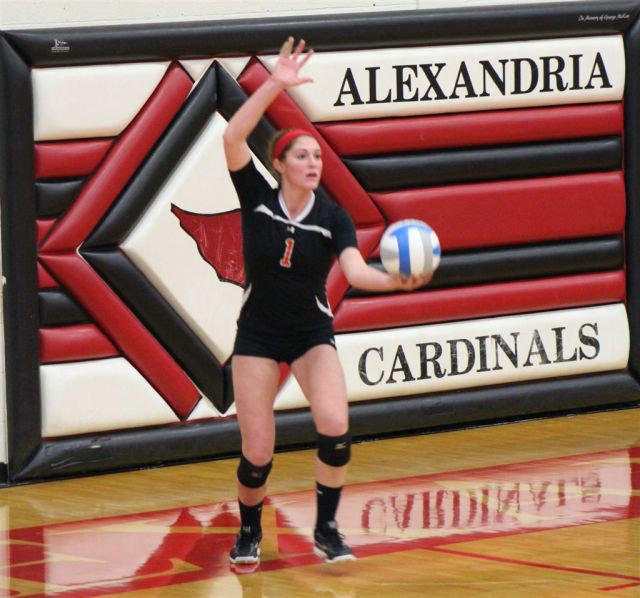 [Liz’s jump serve.  It hasn’t been quite as reliable since her finger dislocation, and having her ring finger and pinkie taped together has got to effect her feel for the ball.] 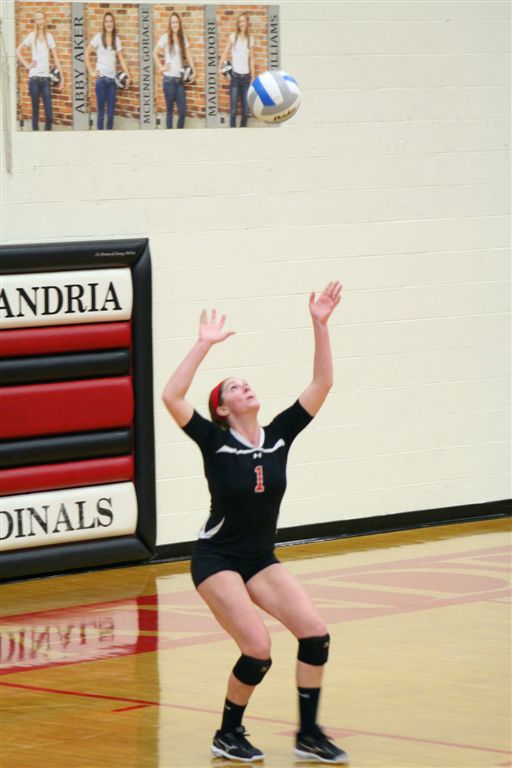 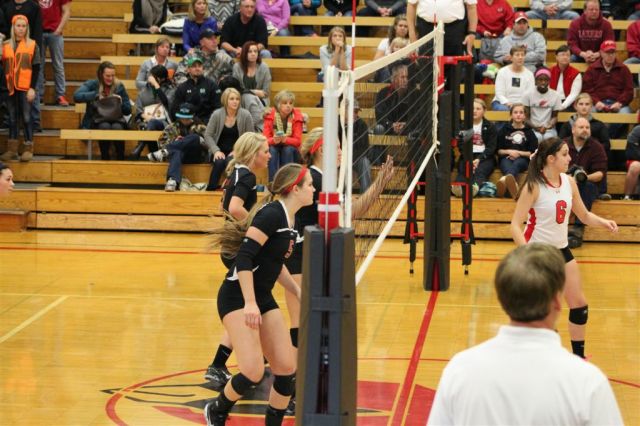 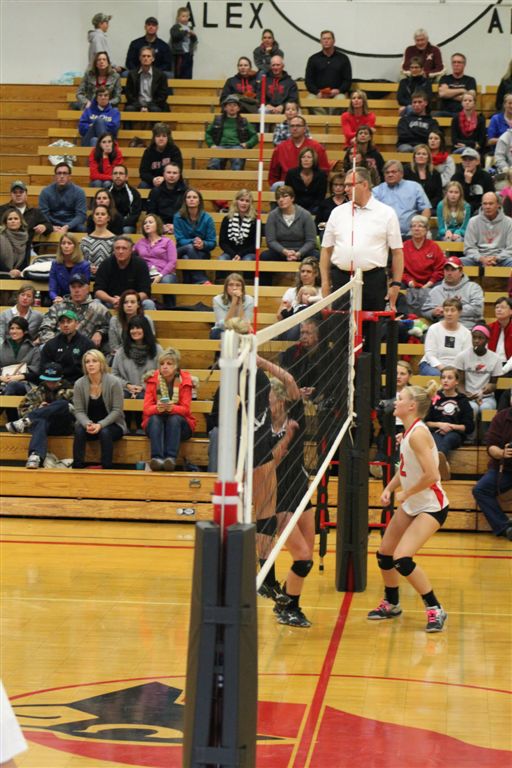 [My sources advised No. 12 for the Lakers has a Division 1 golf scholarship.  She and her partner, No. 3, had a height advantage on us and really gave us fits in the first two games.]

[Wensia, and the crowd behind her, are hoping it goes out!]

[After our big early lead, the Cards wandered into the Twilight Zone for a while, as young teams are wont to do.  They never get panicky, however . . . their fans get panicky, but they don’t.  So after the Lakers tied the game late, they just take an attitude of enough of this silliness, let’s end this thing!] 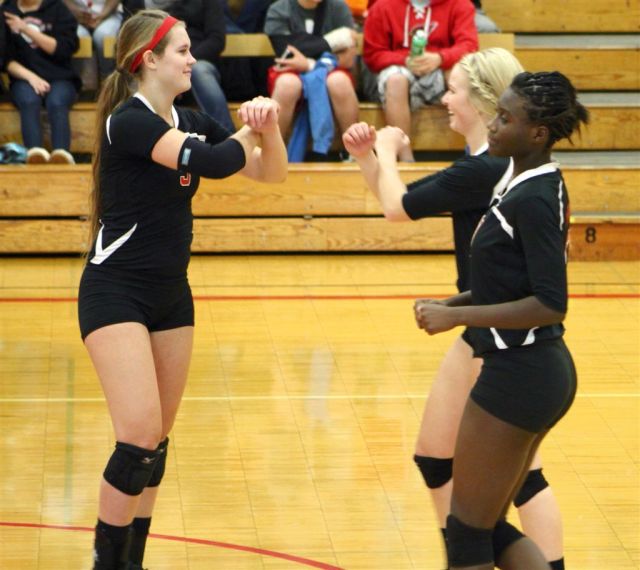 [This is the happiest team.  They’re even smiling through their rough patches.] 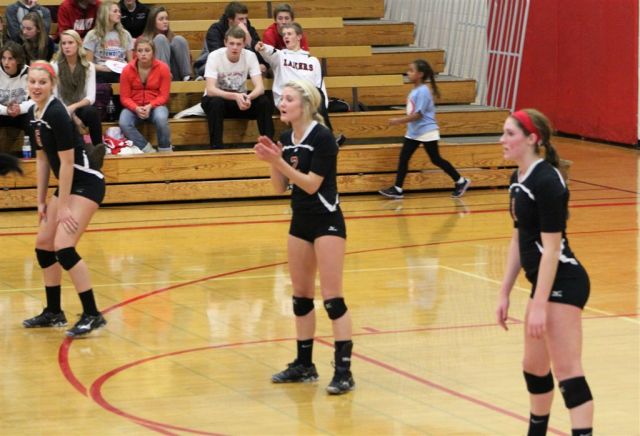 [Emily, Kalley, and Liz are on the back line for this rotation.] 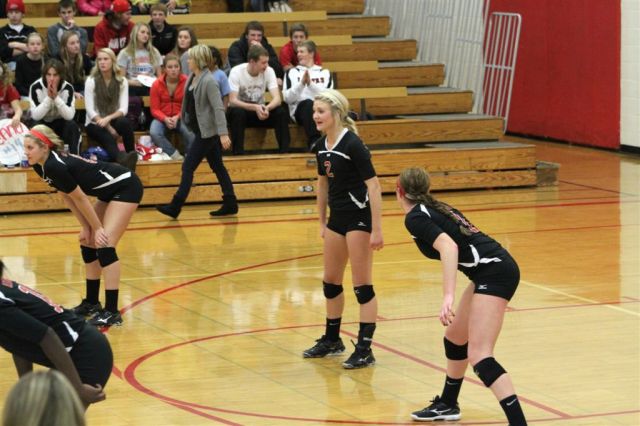 [Let’s get a good return here!] 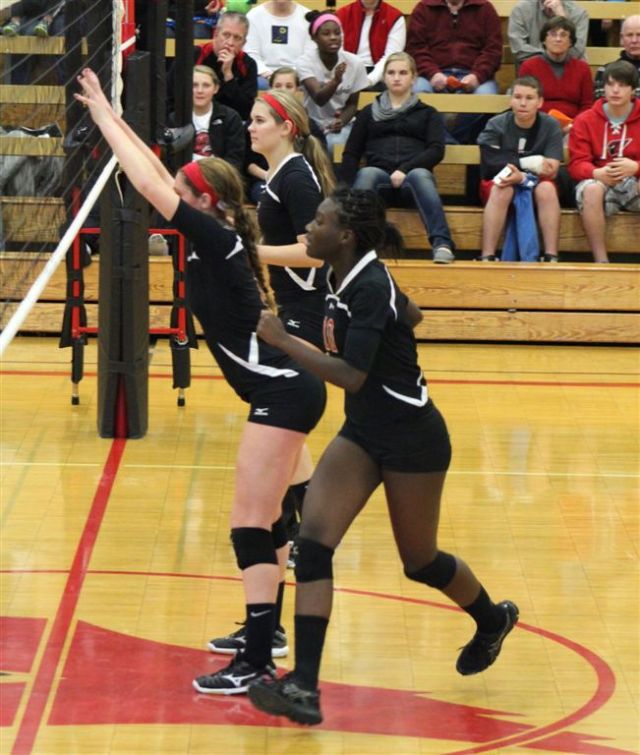 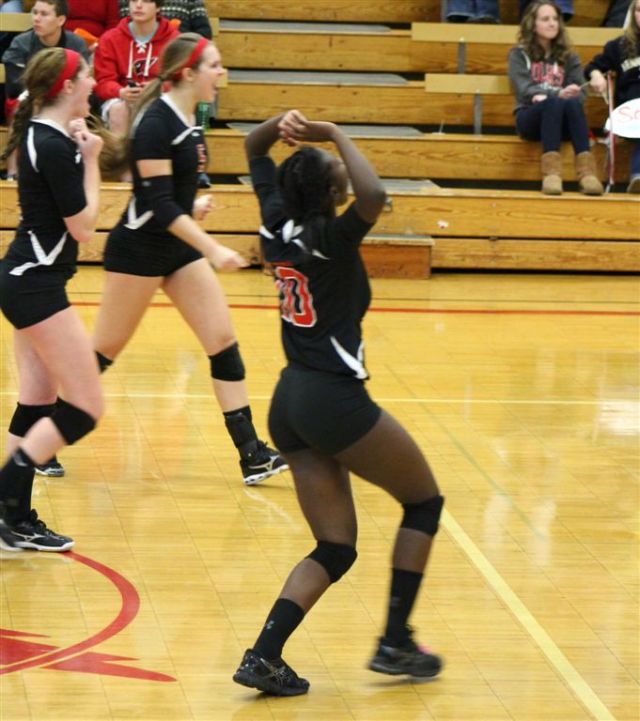 [Now get ready for the next point.]

[Liz and Amanda H go up for a block.]

[Then return back to the earth.]

[And then it was interrupted by the bane of the sports photographer.  😉 ]

[Sheree somehow manages all this without a whip and a chair . . .] 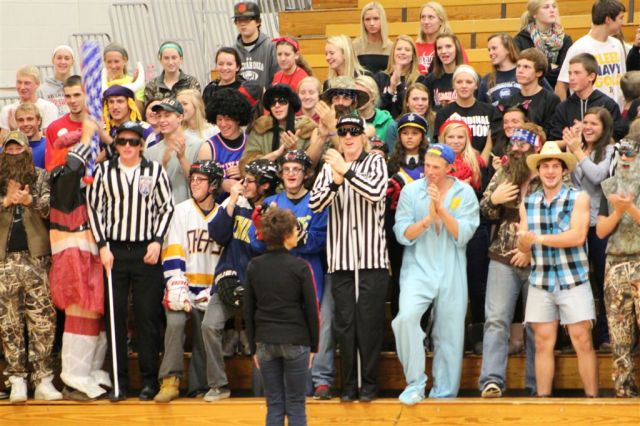 [But they all have a good time together!]

[One of those games where our serving didn’t allow us to get anything going.  It was a close game all way, and the Lakers actually had a one point lead at around 20.  But again, the Cards finished strong.] 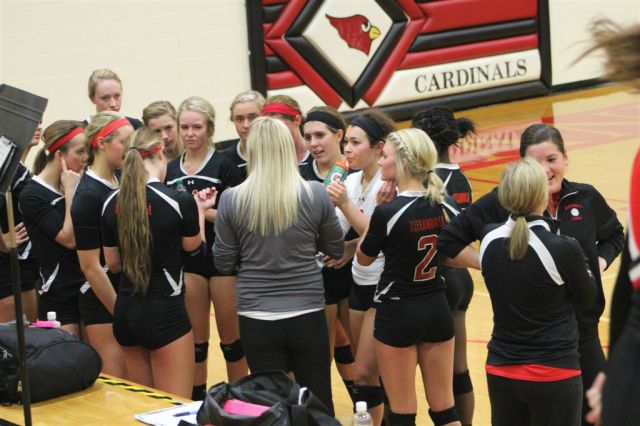 [So double hot fudge Blizzards are out!]

[Hey, I just saw Kim Kardashian over there!]

[She was by the blue garbage can!] 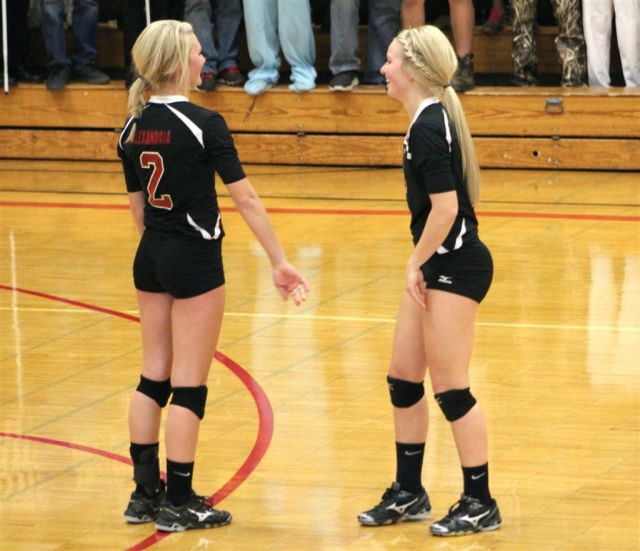 [Hey, did you hear Jess Lourey has a new book coming out?]

[Yeah, January Thaw, should be available by Christmas.  It’s the 9th of her murder-by-month mysteries that take place in Battle Lake.]

[And speaking of Jess Lourey, if we can’t have double hot fudge, I want a Nut Goodie Blizzard!]

[The fans are psyched.] 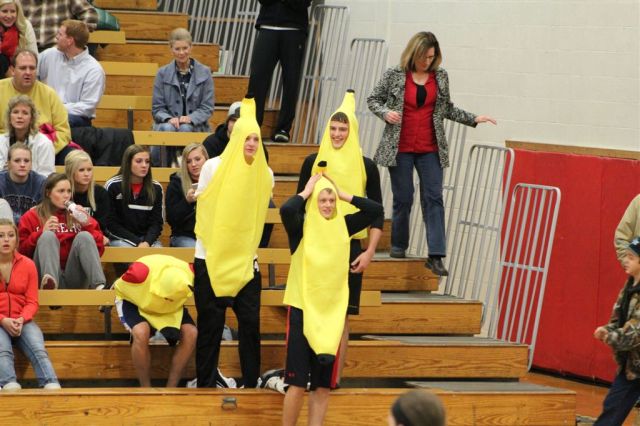 [Just a reminder about the importance of potassium.]

[But is out of control and goes under the net.]

[Point for the Cardinals.] 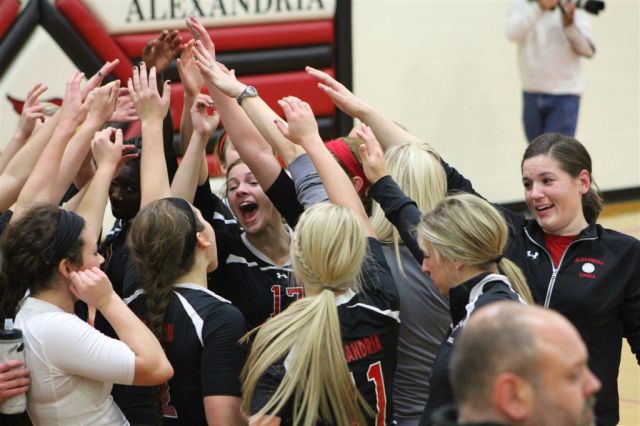 [As the Cardinals were firing on all cylinders.]

[Amanda H and Liz go up.  The fans are zeroed in on the action.] 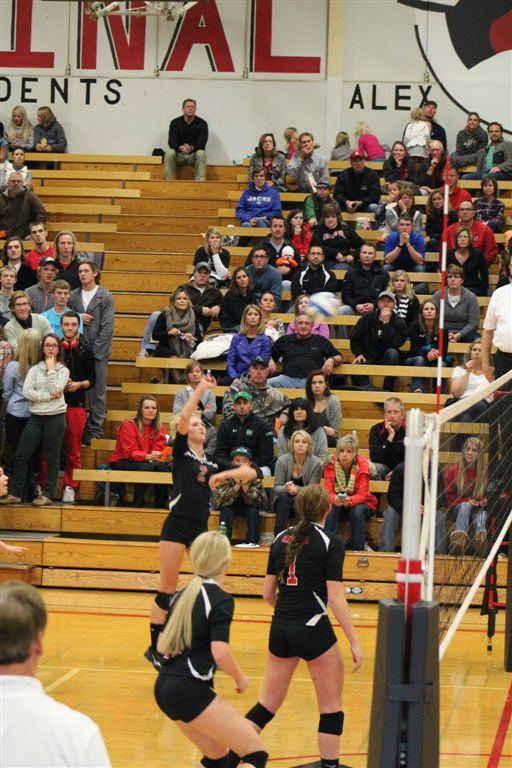 [And then our expansive coverage of celebration with a singe shot, here including “The Voices,” the team, and the students . . .] 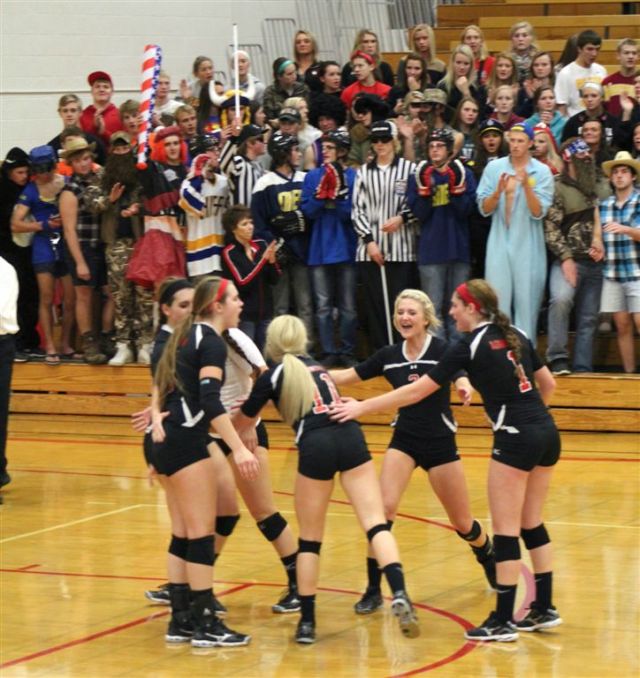 [Then just the team.] 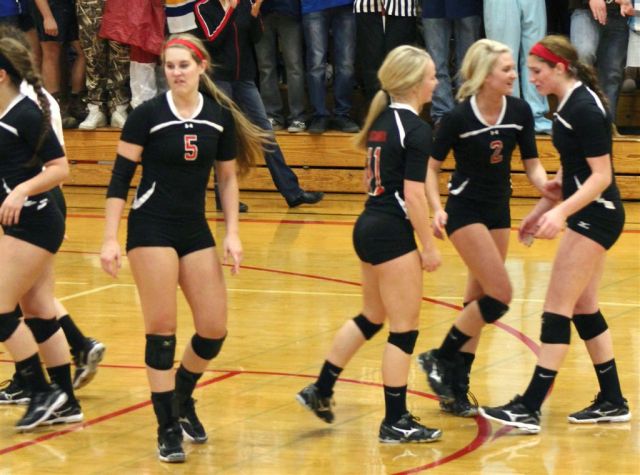 Then I videoed the end of the game:

[And we wrap it up with the cheerleaders.] 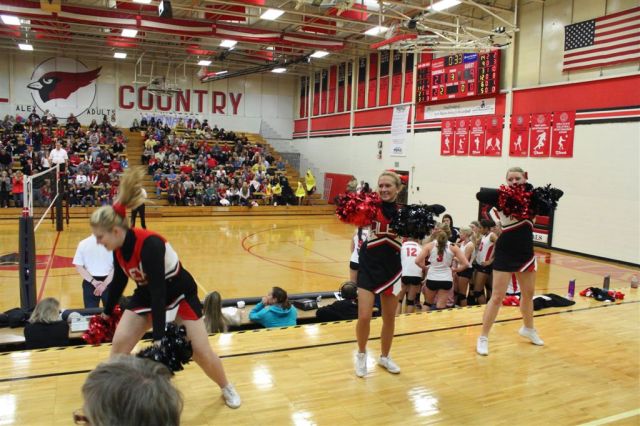 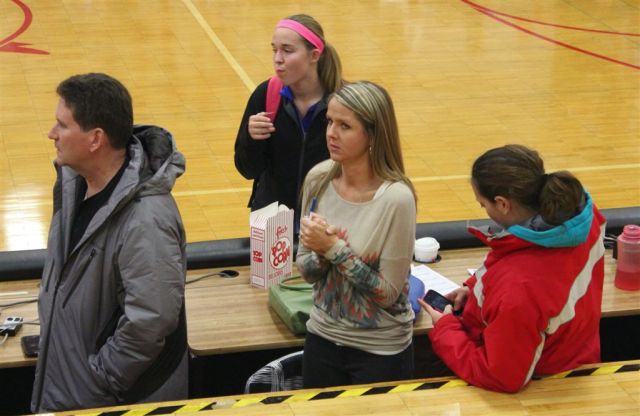 [Reportedly all will acknowledge acquaintance with the Super Fans.  😉 ]