[OK, I lied.  We’re not going to Naples (well, we will after this posting).  The annual Grape Stomp at Carlos Creek Winery took place over a week ago, last Friday, Saturday, and Sunday.  If I wait any longer, it won’t be “news” anymore!  That Friday morning dawned beautifully over beautiful Lake Darling.]

[And it was a beautiful day as we drove into the pasture parking lot at the winery for the afternoon commencement of the Stomp.]

[The walk from the field to the winery facilities.] 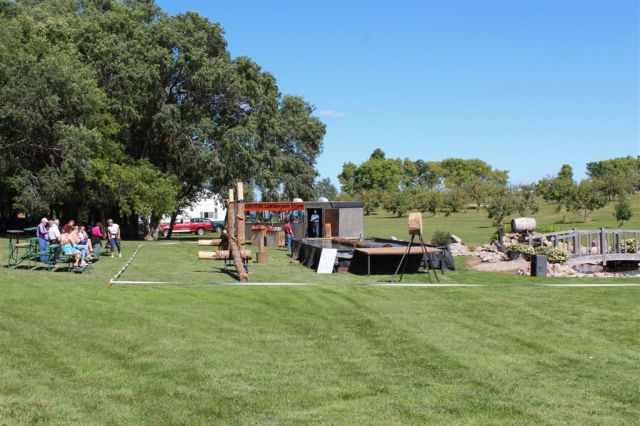 [We go for the music.  Here’s the Mel Lamar Trio w/ Bill and Eric, on the Marquette Stage.] 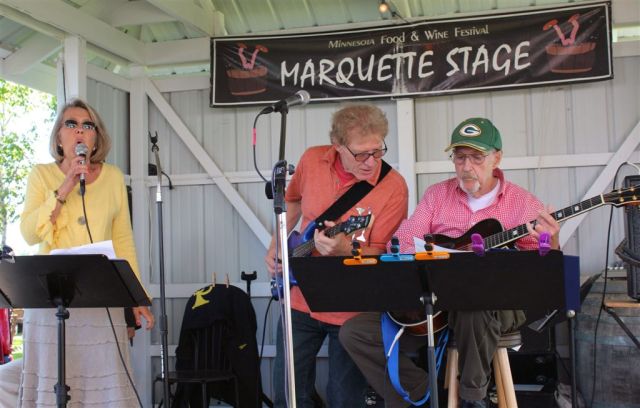 “All of Me” – Mel Lamar Trio w/ Mary Lou Thunselle: 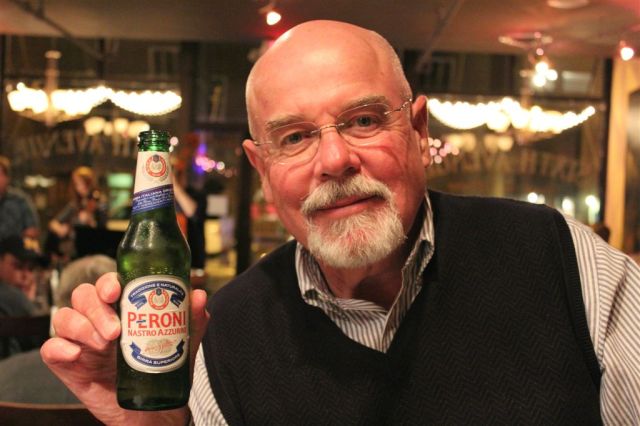 [That evening we went to SAWA to catch Components.  I was delighted to find Peroni – whenever we ate out in Italy, we always said, “And the local beer.”  The local beer was always Peroni!  🙂 ] 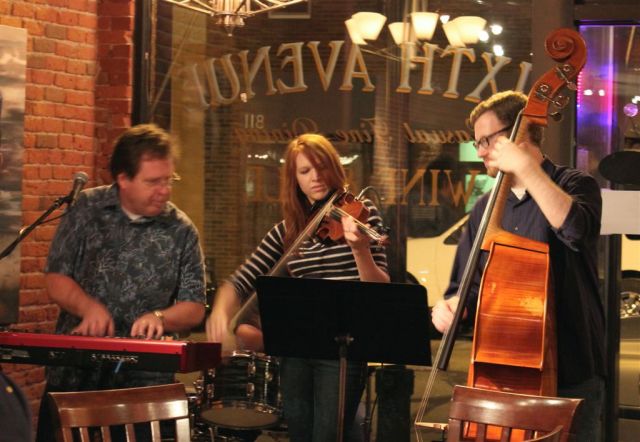 [We were later arrivals, so most of the night involved stop and chats.]

[Some day, and noiseless situation, I will try to get a bunch of videos of them.]

[Then Al walked in, none the worse for wear from his afternoon performance.] 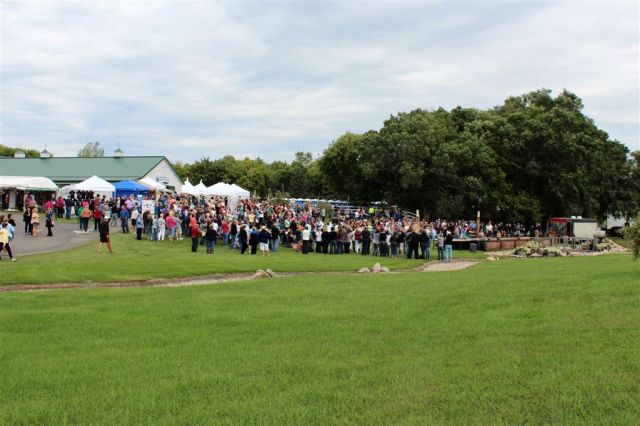 [The came Saturday, and the Stomp’s annual weather hex took hold.  It had not rained here since . . . well, a really long time.  We were in drought conditions, again.  The forecast for Saturday was for possible isolated  thunderstorms.  Of course, it started to rain around noon . . . and never stopped!  How to end a drought?  Start a grape stomp!]

[There was music at several venues, including the Marquette Stage outside where Josie Nelson was part of an hourly rotation.  We hoped to rotate out there as well.  Inside, the big place (the old hippodrome) hosted Harper’s Chord (above, shot by the supervisor and immediately posted on Facebook), Uncle Willie’s Gut Bucket Blues Band, and a young bluegrass group.  As early arrivers, and before the rain began, we staked out a front row table.  When the rain began, everyone who had been outside perusing the vendors and such flowed into our arena until it was packed.  We couldn’t leave or we’d never get our seats back.  The crowd made it quite a party – but way to noisy for videos.] 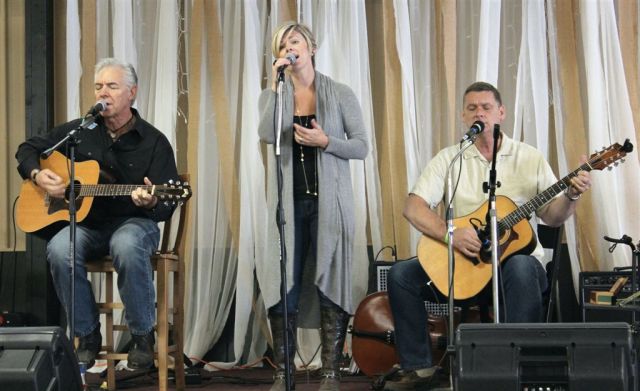 [Roger, Jill, and Paul were their usual outstanding selves!  🙂 ] 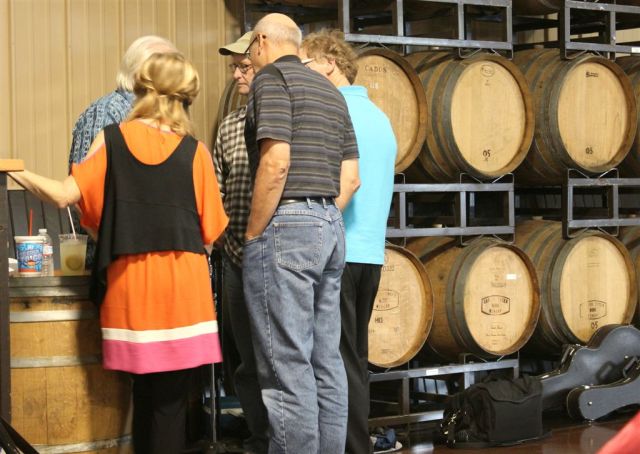 [What the heck.  Forget all that.  Quarterback sneak!]

[Jill shielded Roger from the repossessors.]

[Then “Uncle Willie” took their turn.]

[Al looks to the audience as he does some audio adjustments.]

[They are a photogenic group.]

[Let’s just wander around and enjoy the crowd.] 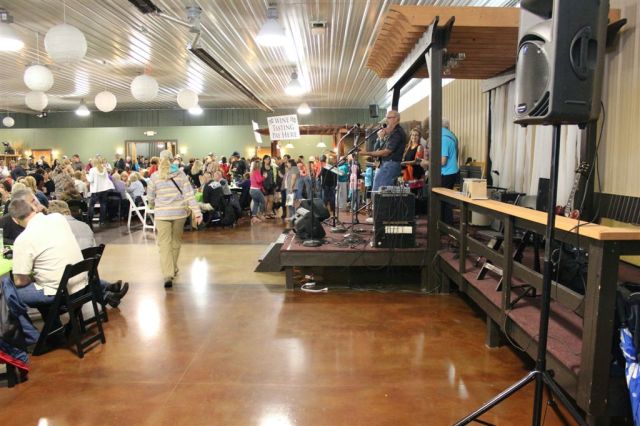 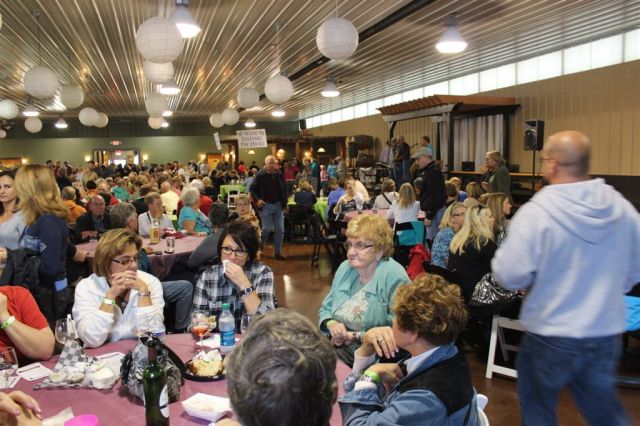 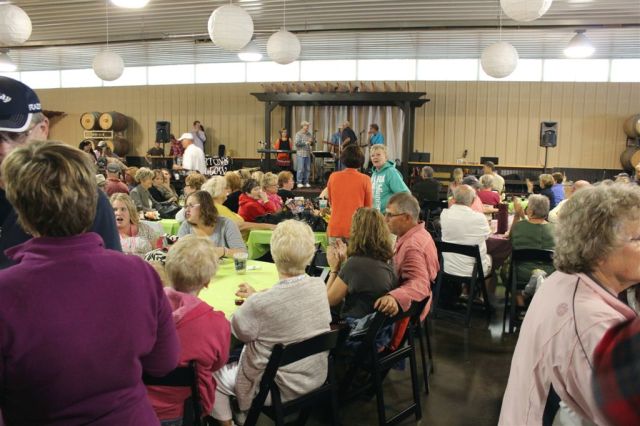 [Our group, across a crowded room.]

[With Harper’s Chord . . . until they performed again, then we would be joined by Uncle Willie.  Worked out, but if you left a chair vacated for 5 seconds, someone would ask for it!] 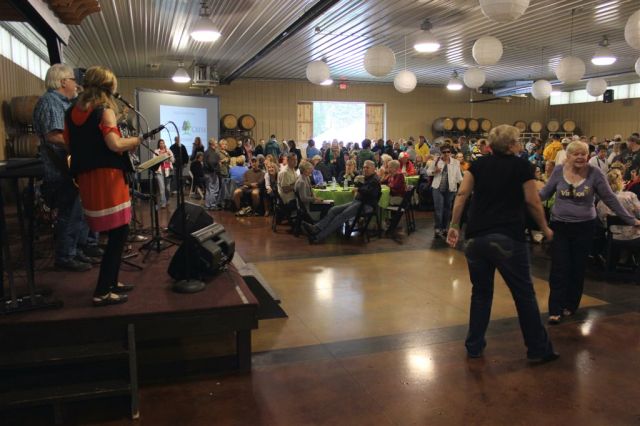 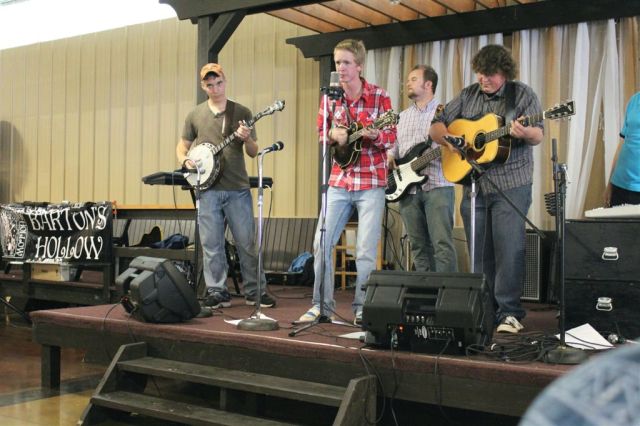 [A young boy, chased by his mom, was an original dancer – solo!] 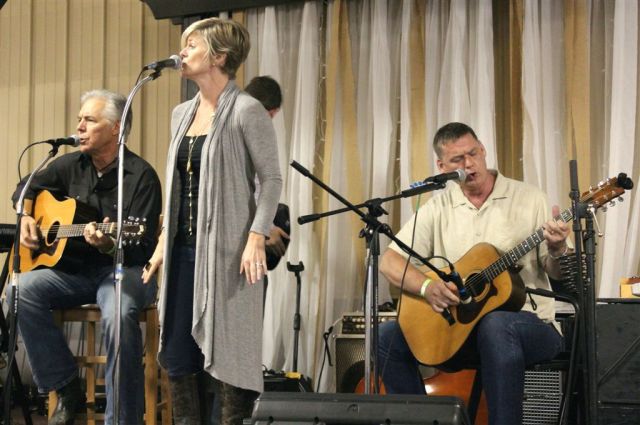 [Then the Lucys arrived – don’t know from where – but there seemed to be dozens of them.  An annual event at the Stomp is the Lucy Look-A-Like contest.] 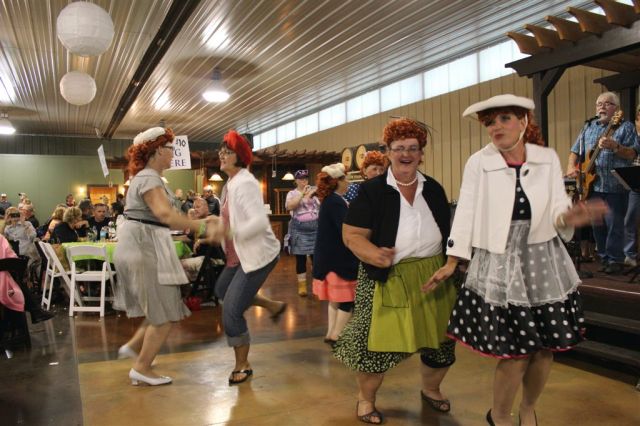 [It’s a winery!  The Lucys were ready to par-tay!] 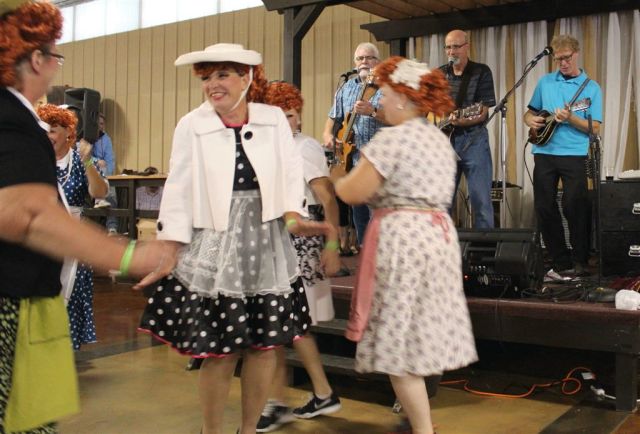 [Remember, we were at a winery.] 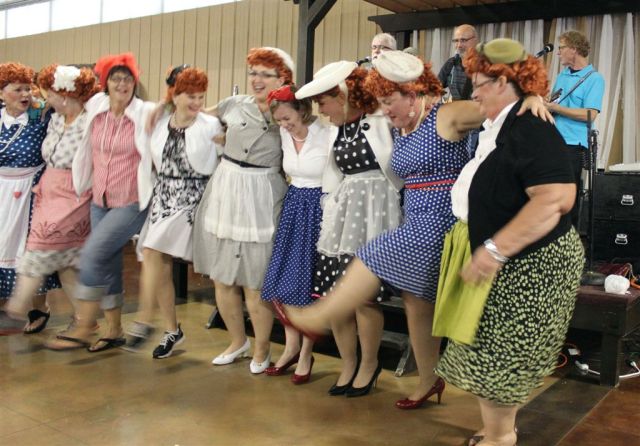 [Wine was the operative word here.] 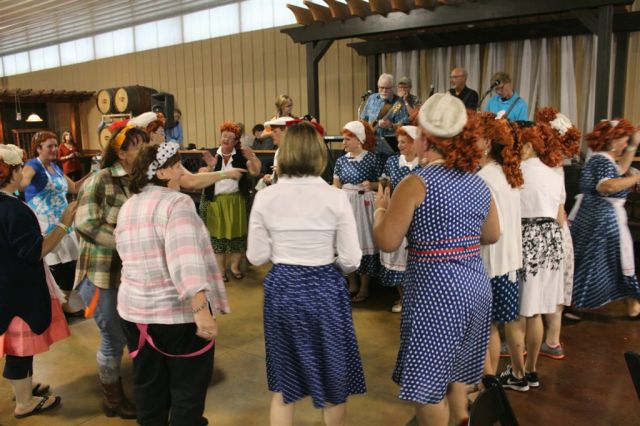 [One of the Lucys asked me to dance.  The supervisor made me do it.  Then the Lucy fondled my fundament!  I was groped!  Nice to know at 66 I’ve still got “it.”  Fortunately, “it” can be can now be cured by a simple glance in the mirror.] 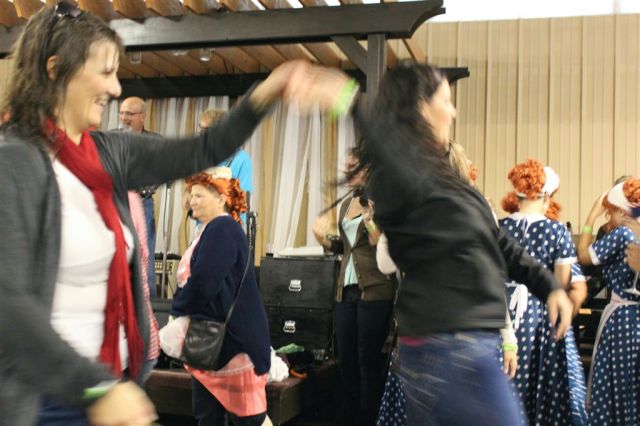 [We’ve played golf with her!]

[I’ve played golf with him!] 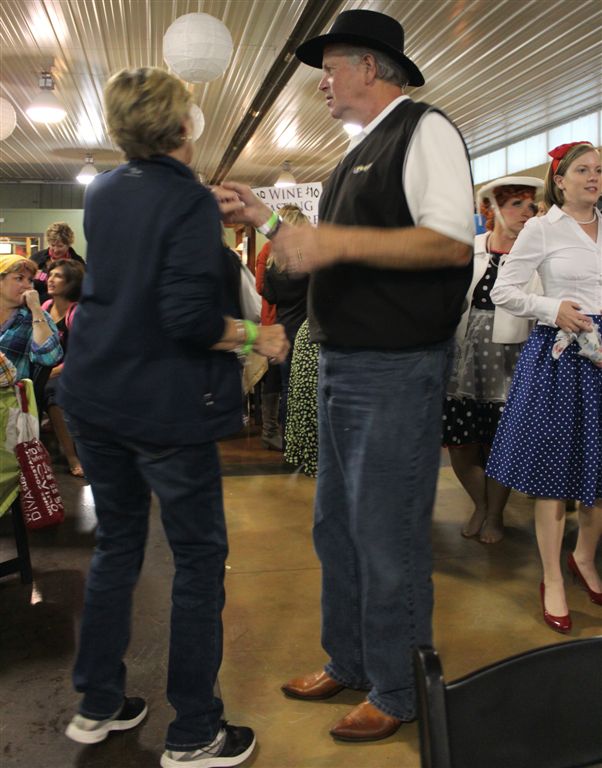 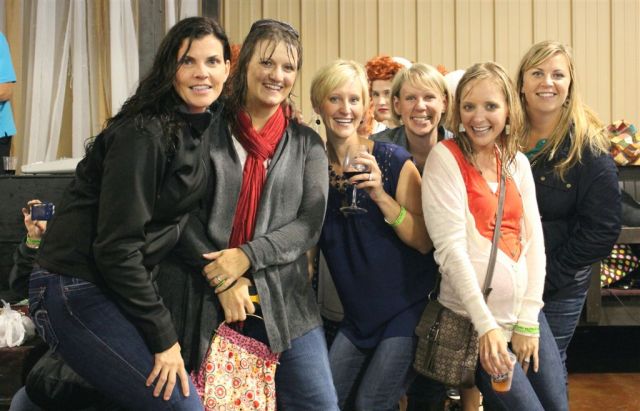 [Josie’s playing in the rain.]

[Everybody’s scrunched together on the porch.] 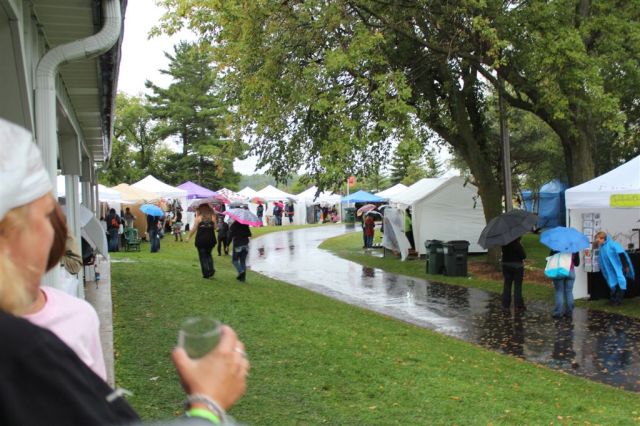 [Another wet day for the vendors.] 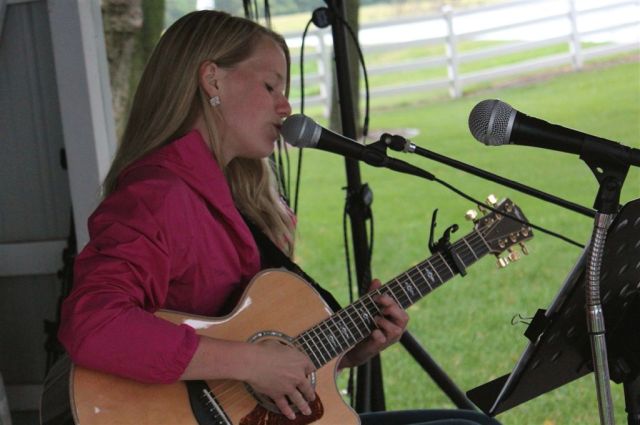 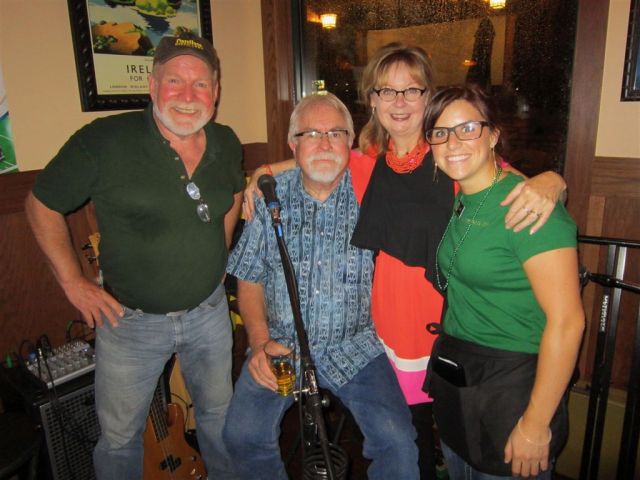 [That night we went to Bennigan’s for Skilly & Duff (Bruce and Annie fled the Grape Stomp immediately to join Mikko here).  Plus, we knew Abby was waitressing there!  🙂 ]

[The celebration was Halfway to St. Patrick’s Day!]

[On Sunday afternoon, Patchouli was inside.  Skilly & Duff were outside, but the weather was chilly and misty so we stayed here under the roof.]

[Julie and Bruce were their usual terrific selves.  They will be back for Applefest in mid-October, and then will be off to Florida for the winter.]

[Again, the inside crowd noise made videos a no go.] 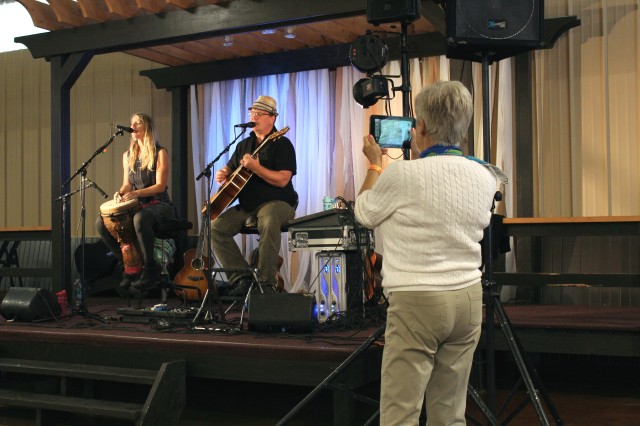 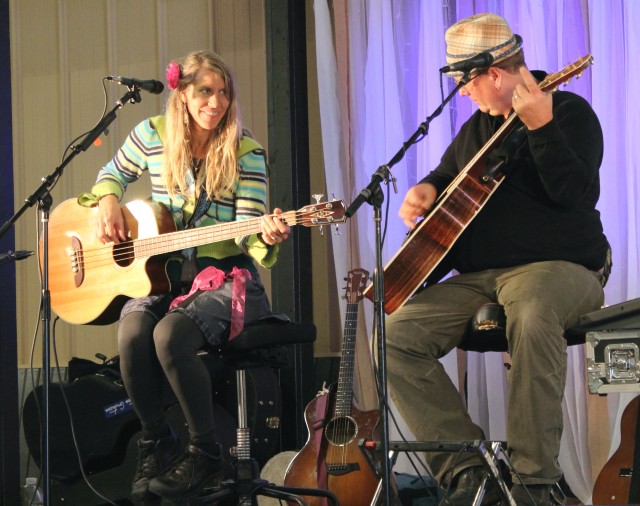 [The supervisor did find time for a little shopping on the last day.] 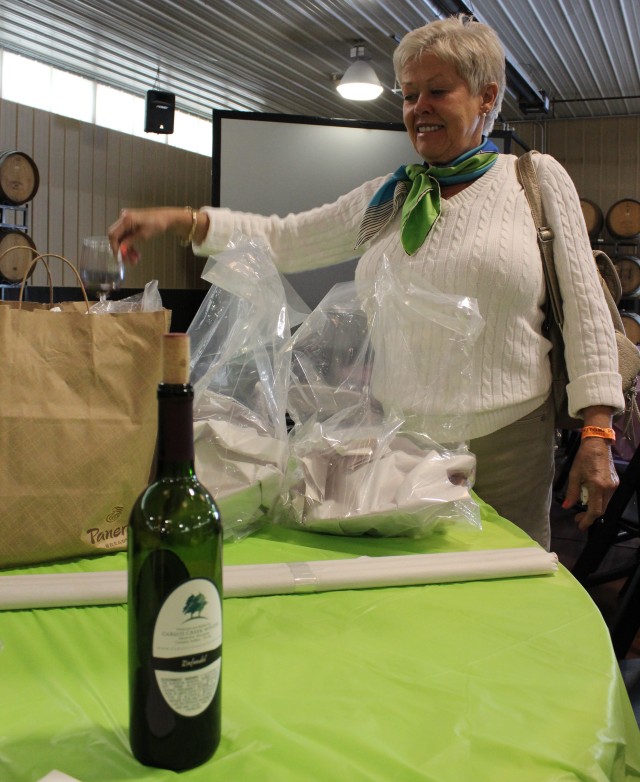 [I had to go vertical to show we featured a Zin on this day.] 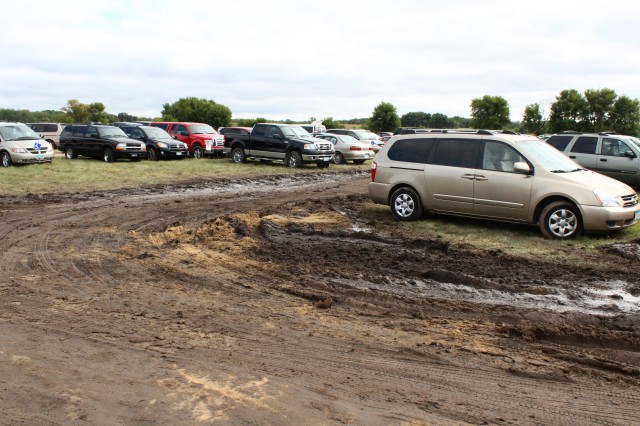 [The walk back to the car.  We’ve seen this scene before.]

[Some rows were a quagmire (not to be confused with the “Family Guy” character).]

[We’re out here somewhere – and we did make it out.]

[Josie, shot by son-in-law Danny at the winery in June.]

We caught up with Josie at the winery again yesterday.  And once more I tried for a good video of “Don’t Know Why.”  For the first time, we weren’t overcome by weather conditions.  I think it’s the best I could do based on limited photographic abilities.  Enjoy.