The supervisor left me to my own devices on Thursday.  She was going to join her kids, her grandkid, her sister for the spring clean-up of Camp Brosius in Elkhart Lake, Wisconsin.  She threw me over for blood relatives, proving once again that blood is thicker than my midriff.  She got caught in the record spring snowfall on the way there – she had to pull off the interstate several times it was so bad.  She returns home today – fog is going to be an issue.  Is there ever a time of year anymore when travel is routine?  Anyway, I pledged to clean the garage in her absence, weather permitting.  So far, it has not permitted.

In May 4th’s Minneapolis StarTribune, from Flip Saunders, new Timberwolves general manager, ex-Gopher, and native of the Buckeye State:

“When I’d go to work for ESPN, [other anchors] would say, ‘Where do you live?’  And I’d say, ‘Minnesota.’ They’d say, ‘Why Minnesota?  You can live anywhere you want to live.’  And I’d say, ‘Well, you don’t really understand Minnesota unless you’re from Minnesota.  You really don’t get it.  Even when it snows on May 3rd, you really don’t get it.’  The loyalty and the passion that the people have here is what always drives me back.”

[Editor’s note:  Probably means, ‘Hey, we all survived another winter together!”  So, I’ll just lay back on a Saturday morning, May 4th, 35 degrees and raining outside, and watch golf from China!  😉 ]

The Cardinals had scheduled weekend invites for both baseball and softball.  I was sure they would be played.  Their seasons are running out of seasons.  We had hoped to attend but are admittedly fair weather fans.  I was “scheduled” to attend the Anthony Miltich fest at the winery in the afternoon and decided to check out the sports venues on the way?

[Yup, baseball was happening at Knute Nelson.  Marshall and St. Michael-Albertville were the invitees.  I have no results at this time.  (Note to self:  Give baseball moms e-mail address so they can advise me.)]

[Yup, softball was happening at Woodland Elementary.  This must have been a last minute arrangement – no list of invitees to be found.]

[Well, as long as I was in the neighborhood, thought I’d check on the status of the new high school construction.  During my visit with the superintendent at Tuesday’s baseball game, he said he’d just toured the new auditorium and that is was HUGE!]

[The run-off ponds will be stocked with creatures indigenous to Minnesota – frogs, turtles, great white sharks.  But this stocking is likely to be done naturally.]

[Too messy ahead – wouldn’t want to muss the supervisor’s pick-up.]

[Then it was on to the winery and Professor Anthony Miltich.]

[As a proud Minnesotan, and oenophile of note, I’m delighted to announce that CCW’s Marquette wine, from the grape of the same name, is . . . delightful.  The label notes: A premium red grape developed by the University of Minnesota.  Medium bodied dry red [which could describe me after toweling off after a hot shower . . . OK, full-bodied].  Ruby color.  Aromas of cherry and musk melon.  Bouquet of clove and vanilla.]

[But among the crowd of 20-somethings, didn’t see a single person I knew . . . well, beyond the performer and staff?  But this just learned yesterday, after Mother’s Day brunch you can go out to the winery and see Anthony perform that afternoon!  😉 ]

[I advised winery owner, Tami Bredeson, that the Marquette was “yummy” (a state-of-the-art wine term).  She said wait till you taste this year’s!  Both are 2011 vintage, but she said the existing bottles were oak kegged for 9 months (as that is the normal aging period for a pinot noir-type grape).  They thought they’d experiment and put half of the 2011 crop in kegs for an extra year.  Being an A-lister (requirements: show up early and often), I later received a pour of the new stuff from Tami (the glass on the left).  Yummy, too, with a little fuller body and smoother taste than the previous.  No, I did not drink a whole bottle of wine!  I brought half of it home for the supervisor – I’m considerate that way.]

[Most of my attempts at being the photographic subject did not turn out well yesterday.  I need to give more training!  😉  Anyway, this is a Bruce Hecksel (of Patchouli) hung in the winery as he was commissioned to do a label.] 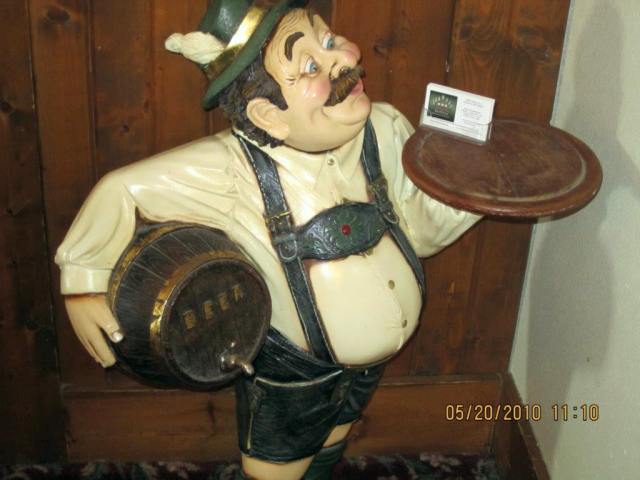 [Regarding the winery’s proposed brewery, I was advised the permits are still being pursued, but that it ultimately comes down to finding the space.]

[And then it was on to . . . at the golf club.  The annual fundraiser for Theatre L’Homme Dieu.]

[It again drew a full house and a good time was had by all!]

[And two TV’s were there for some sporting event that was about to occur.] 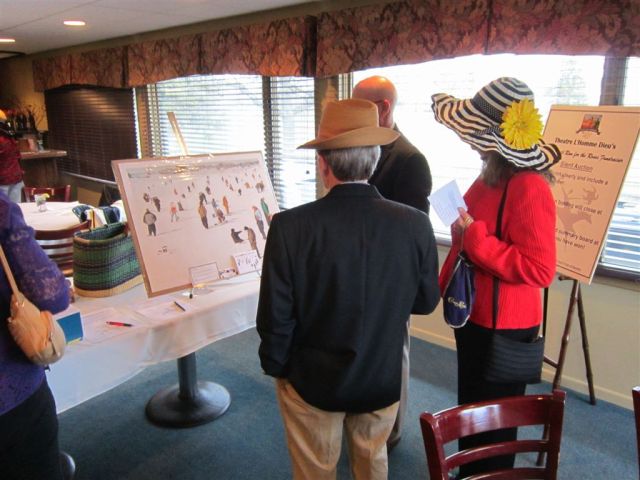 [David and Amy Sunderland overseeing his artwork in the silent auction . . .]

[I placed a bid, but someone with real money topped it.  My loss is the theatre’s gain.] 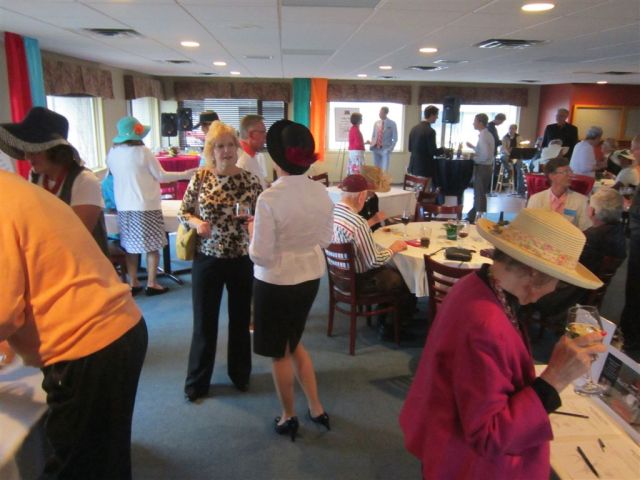 [The idea was to wear Kentucky Derby chapeaus, a/k/a, hats or bonnets.]

[My chapeau may not have been derby appropriate, but as I said, the temperature was in the 30’s for Pete’s sake!]

[We were entertained by Al Leiffort, Mel Lamar, Bill Riggs, and Sara Schwabe (a/k/a, Shelly Karnis’s daughter) as the singer and emcee.]

[The items for bid – I was glad the supervisor was out of state!]

[Aim a camera and people will pose . . . or sue you for breach of privacy.] 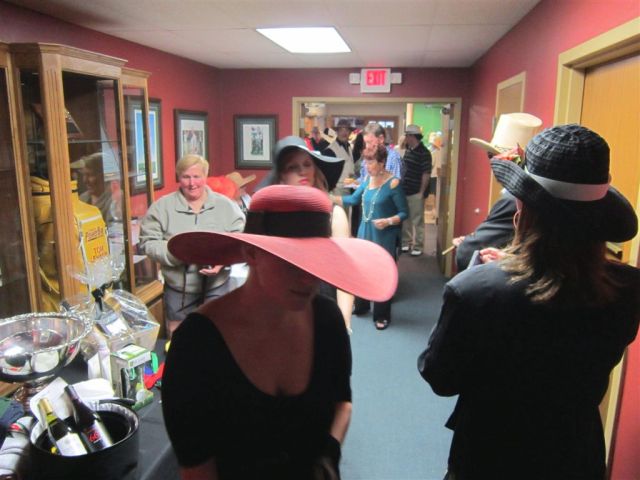 [Wandered into another room for one of the games.  My putt was a tad right . . . fur got in my eyes.  Amy took the photo.  The photo I then took of her was blurry – go figure?] 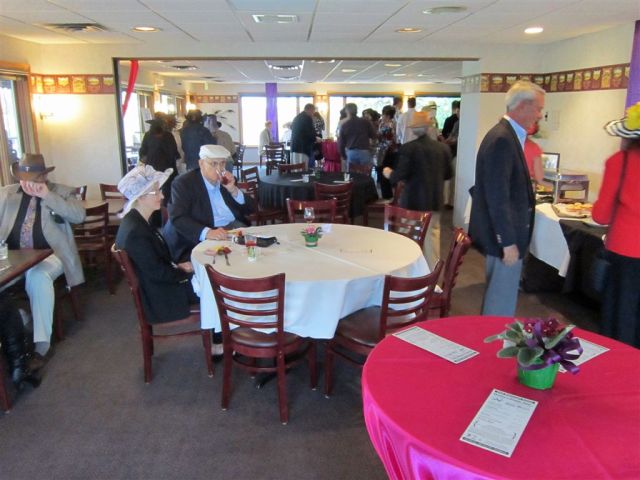 [I unsuccessfully played two other games in here.  But people liked my hat.]

[Back to the main dining room – there’s emcee Sara in green.] 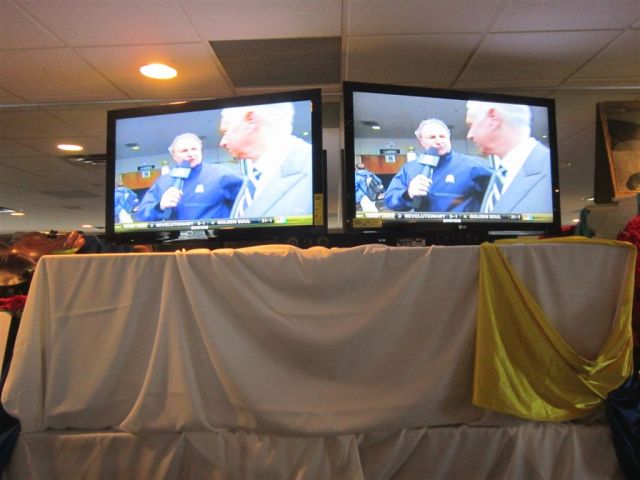 [Ken Howell, at the bottom, usually better known as Jeanne’s spouse, sports a bowtie from 1973 – and he admitted it was a clip-on.] 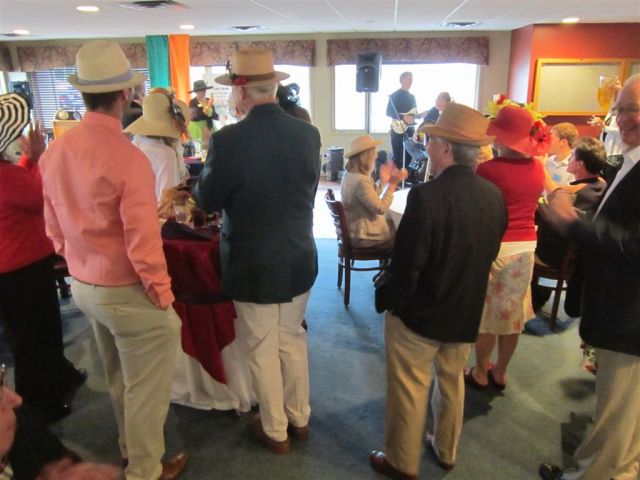 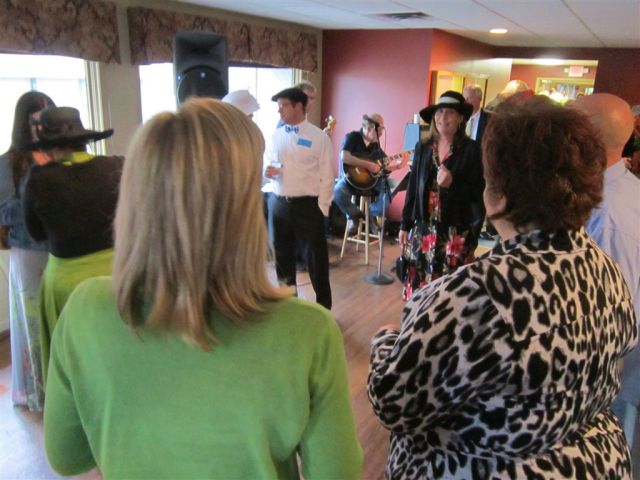 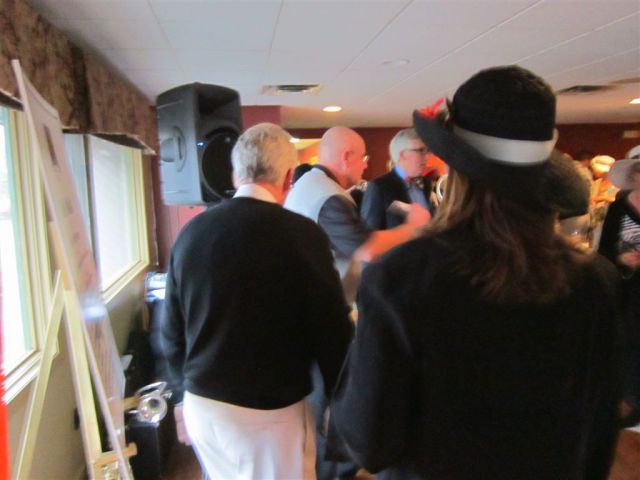 [I opted for the cakewalk a 2nd time – and won the cake (for a mere $25.00) at the top of this page.  In my excitement, I told the honored guests I was going to stop at the DQ on the way home to pick up a couple of chocolate malts to wash that puppy down!]

The syllabus subcommittee for adult education classes were at the event.  With great determination and anticipation, we decided to get together this afternoon to review a proposed movie for next season’s theme, Sex, Drugs, and Rock & Roll, a/k/a, The 60’s.  Once home, all discovered we already had stuff on today’s calendar, so immediately began e-mailing (we don’t text or tweet . . . yet) each other about the scheduling conflict.  Education’s loss is a John Denver’s concert and dance class’s gain.

Speaking of the DQ, and in other news, we discovered that Cardinal athlete, soon to be matriculating to UMD, Danielle Strater, is working at the Northside DQ.  We are still hoping to catch Dani and her teammates on the softball field before the season ends.  So, give her a “hi” when you drop in: 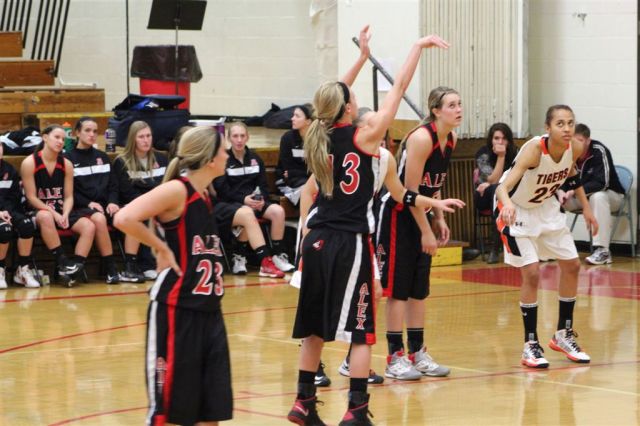 And to my knowledge, there is only one home track meet.  Keep an eye out for it and get a chance to see the likes of Bethany Hasz, her sister, and friends starring for the team: 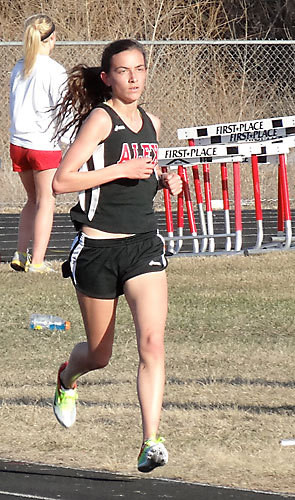 And finally, we leave you with the following sage words of advice from Cardinal alum, Danielle Justice, from her blog http://2girls1van.tumblr.com/ : 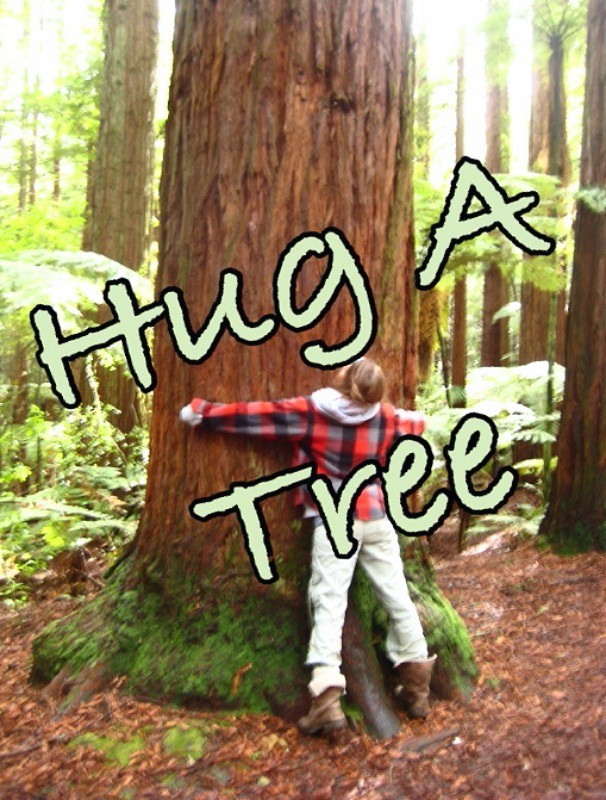