[A quintessential winter sky.  I don’t know what “quintessential” means.  I just wanted to use it in a sentence.  (Oh, I’m sorry.  That was “vicissitudes.”)]

So, what’s the deal here?  The coldest first day of spring in 48 years!  17 below zero wind chill again this morning – we’ve been stuck on that number for several days.  So, let’s take a road trip to the gym with the cub reporter, likely the video of the year: 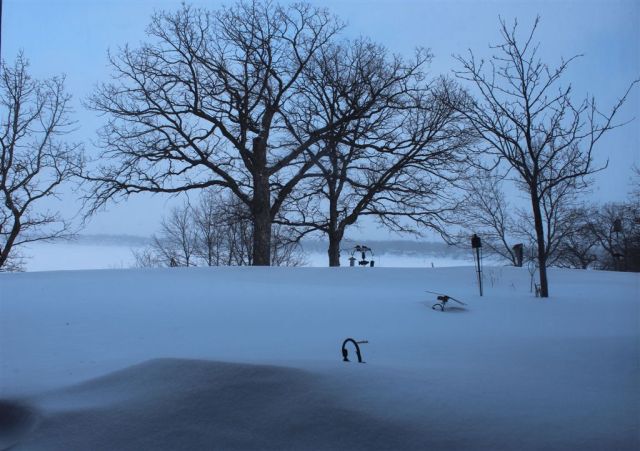 [Can you find beautiful Lake Darling behind the snow drift?] 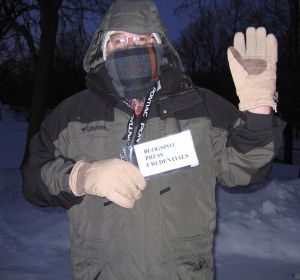 This has been our worst winter – for ice and snow – in our 12 years here!  And winter has just been February and March.  We get a 3-5″ snowfall about every 3rd day.  Just about every morning I amble out in my bathrobe, jacket, and sockless boots to shovel the slab, the snowplow ridge at the end of the driveway, and the mail and newspaper boxes, that now have about 6″ of ice at their bases I can’t move.  We’ve been 20 degrees below normal temps most of this month – and they’re saying we won’t hit 50 degrees in March (how ’bout 40?).  They say Minneapolis could hit 41 by next Tuesday – still below normal, but Scandinavians will be running naked in the streets!

But we have had enough days around freezing that occasional freezing drizzles lay down further layers of ice – and with the height of the sun at this time of year, we get melt on sunny days even if it’s in the teens (and it just refreezes again at night).  Parking lots are extremely hazardous for walking.  We were out all day last Thursday, as we are wont to be, and when we got home that night (late-ish), the winter’s-long snow on the garage roof had released and splatted all over our slab.  Talk about your heart attack snow!  With ice bergs too big for the shovel to lift or break up that I had to hand lift and hammer-toss to the side!  And this was shoveling at about midnight because we were s’pose to get snow all night and the next day (and we did). 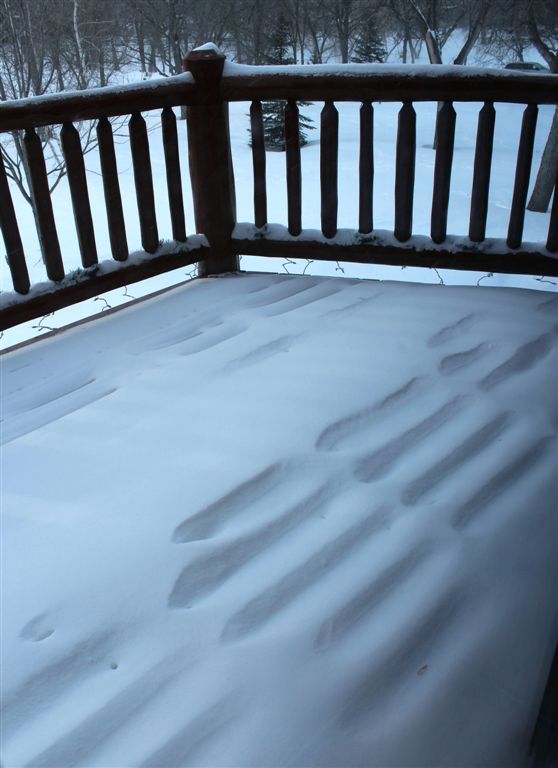 [The blizzard this past weekend left these odd markings on our deck.  Apparently the winds were strong enough to suck snow through openings between the boards?]

[Out the backyard after the most recent “event.”  Where’s our fire pit?] 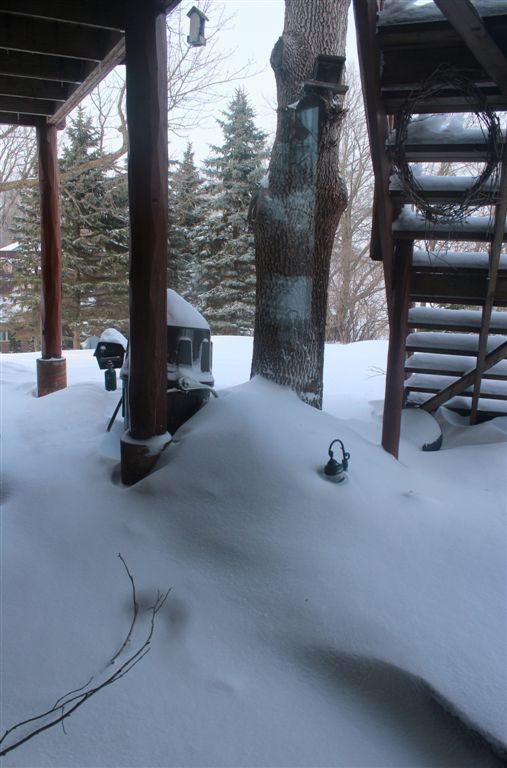 [Do not venture out the back door without a family of St. Bernards.]

[Of course, looking out the front door wasn’t any more exciting.]

[Tuesday, 2:00 pm, the Mounties came to rescue us!  We had been housebound since Saturday night.  The Fat Boys Walking Club at the ‘Y’ was operating at minimum capacity – it couldn’t produce a quorum.] 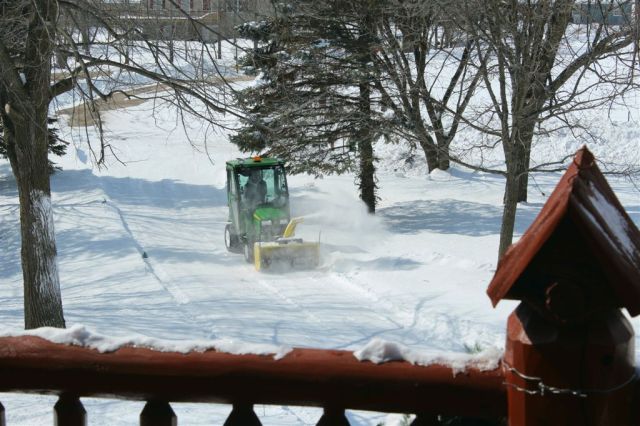 [The weekend blizzard allegedly only produced 5 inches of snow in Alex.  But a couple days of high winds stacked drifts across our driveway in sizes to large for the supervisor and me to tackle with our shovels.  This was only the fourth time (2nd this year) we have had to be plowed out!] 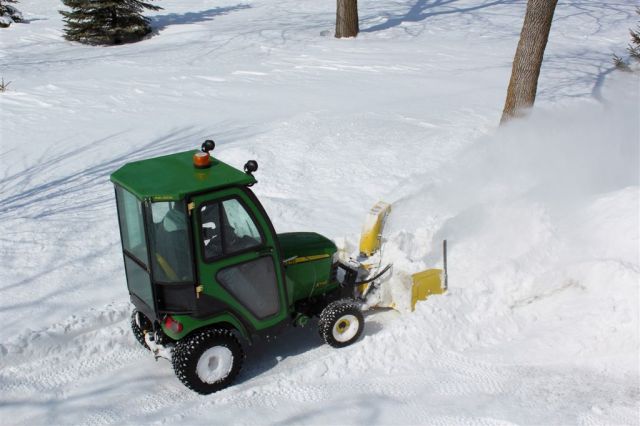 [The supervisor would say to heck with diamond jewelry – I want one of those things!!] 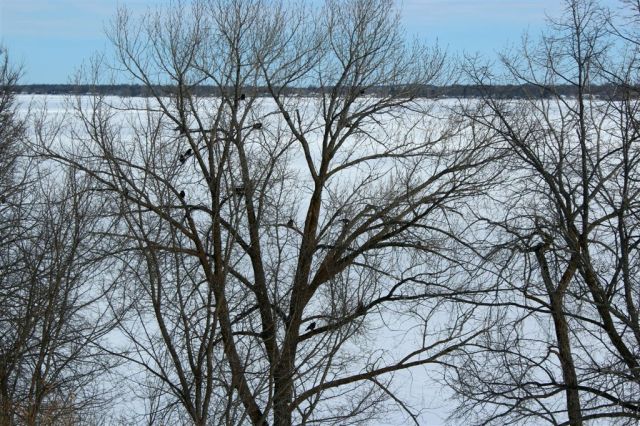 [We were rescued in time for the Empty Bowls Fundraiser at the high school last night.  If you go back one year in the blog, you’ll notice we went to this same event last year in shirt sleeves.] 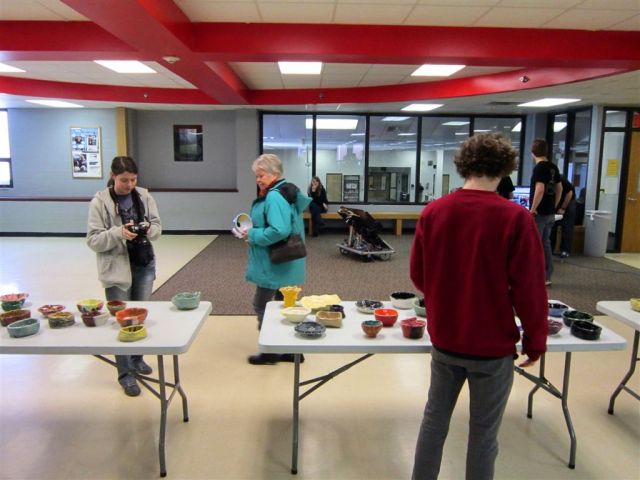 [She was suppose to be the model for the empty bowl display this morning.  She begged off.  Something about her hair.  So, here I am – unfresh after the Fat Boys Walking Club.] 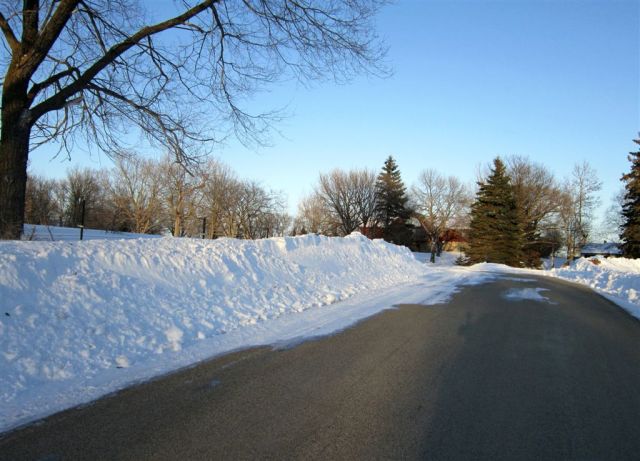 [And we’ll wrap this up with snow pile shots on the way home.] 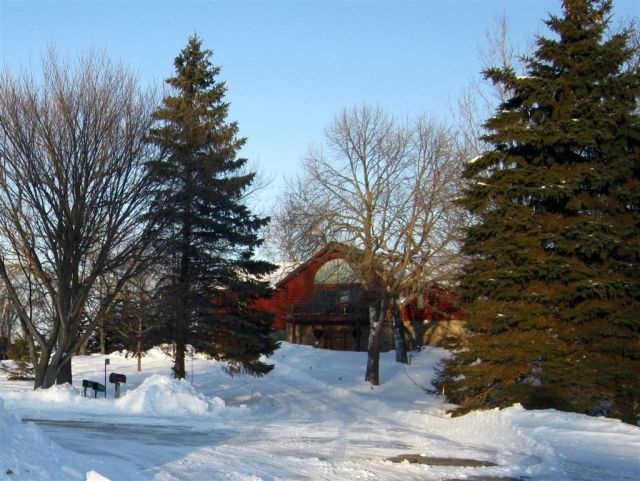 [I have shoveled out the mail and newspaper boxes so many times at 5:00 am this winter that we’re all on a first name basis.]

[The cut of the snowblower reveals the drift height across the driveway.]

[And usually after a snowstorm, you get nice weather perfect for shoveling.  This time, as nice as this looks – and today was a carbon copy – it was still well below zero wind chills!]