We Went to a Boys’ Game?

Did you get that, Harry?  Harry?  Well, there’s a certain segment of our society we call the troglodytes, i.e., those who think girls’ sports is an oxymoron (that would include Brother Cam, who had a daughter who was athlete, but I guess being a gymnast is OK?).  So, every once in a while we have to throw them a bone and cover boys’ sports (an oxymoron for Olivia Newton-John’s Let’s Get Physical?).

The Cards’ boy basketball team had been on a roll at the end of the season and were hosting Little Falls in the 1st round of the sections last night.  So we thought, why not – we hadn’t been to a game yet this year.  Oh, and look above – we won, though it was much closer than the final score. 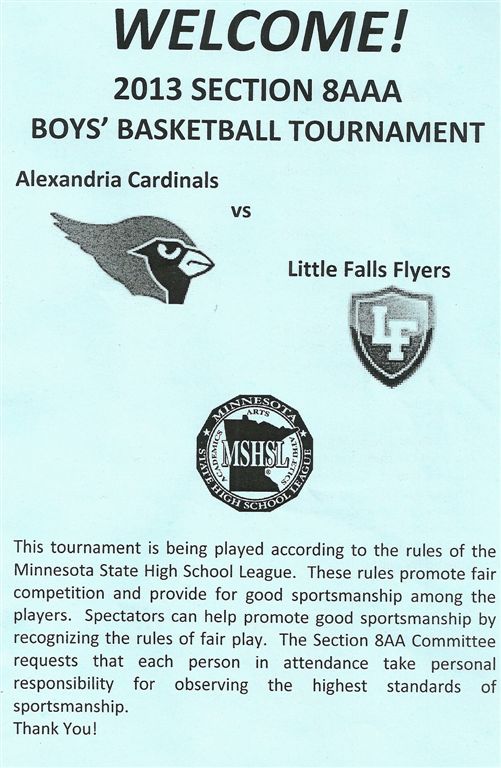 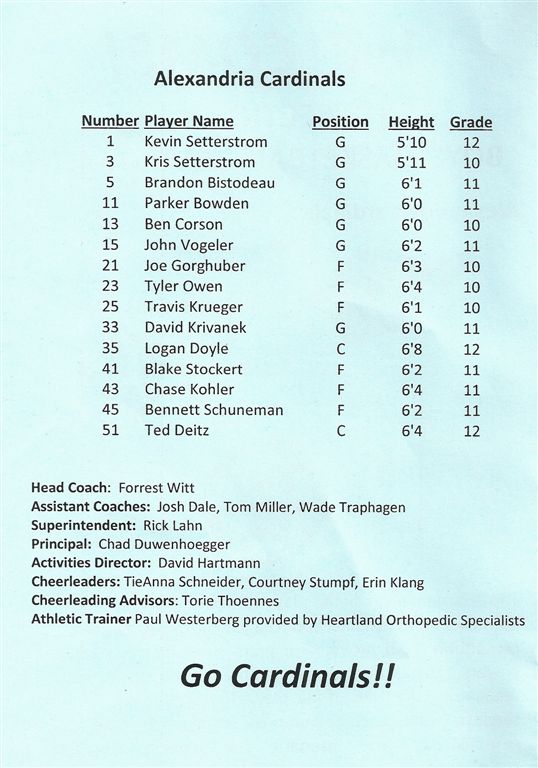 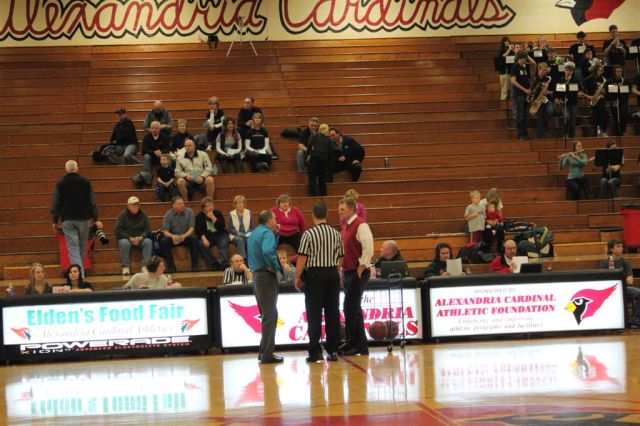 [A late arriving crowd.  If Alexandrians know the game starts at 7:00, there’s no point in getting there before 6:59.  As it was, it almost sounded like a home game for the Flyers as there was a huge contingent from Little Falls bellowing in our ears all night!]

[The tall guy with his hand in the air is 6’8″ senior Logan Doyle (35), who will play for South Dakota State next year.  Gold shoes is 6’2″ junior, John Vogeler (15) – he was the quarterback on the football team and apparently didn’t start playing basketball until late January because of a football injury.  The Cardinal fortunes continually improved the more he played.]

[The band, noted for their instruments.]

[Trying to capture “The Voices” between the departing Cardinals.]

[“The Voices” entire fan club was there, sitting directly behind them.  They’re working on a youth movement.]

[Kendra Holm, El’s granddaughter and manager emeritus, darts in front of the band, still known for their instruments.]

[“A Voice” was trying to confirm a Kardashian sighting, as it had already been reported on KXRA?] 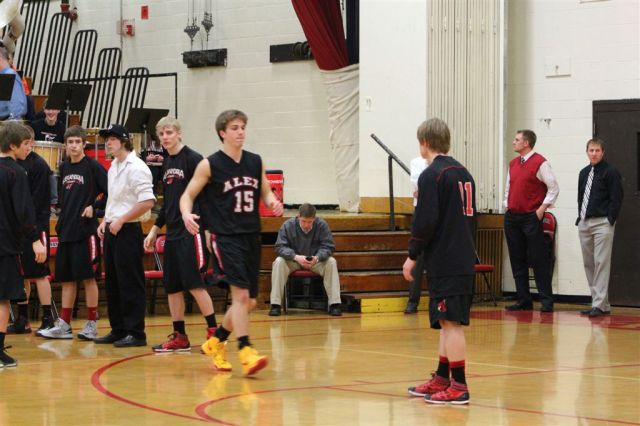 [Salutes veterans, which would include me.] 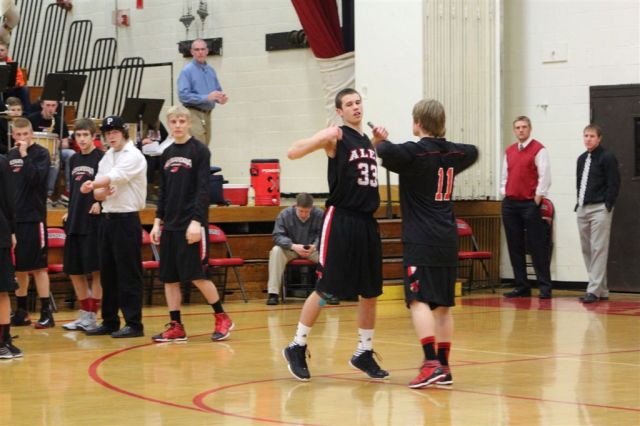 Editor’s note:  I’m trying to do this while watching the first round game between Edina and Lakeville North in the boys state hockey tournament.  There seems to be a goal every 30 seconds – very distracting!

[A blurred attempt at trying to capture the opening tip.] 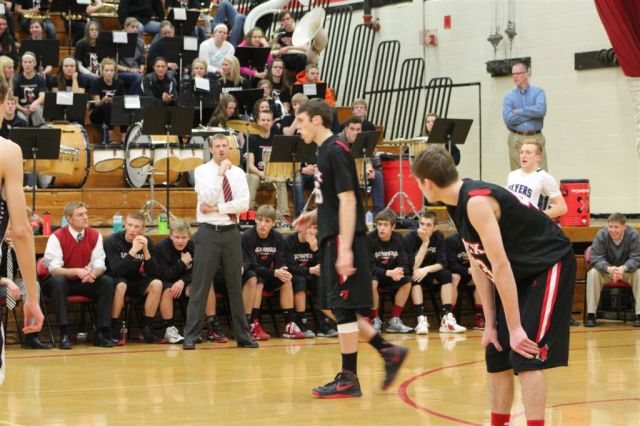 [The Flyer in the right background.  Point guard, cocky kid.  But gotta give him some credit.  He was quick and strong, often followed his own shot and scored, and when he’d drive into the middle only to have Logan swat it into the stands or impress Spaulding on his forehead, he’d just smile like, whadya gonna do?] 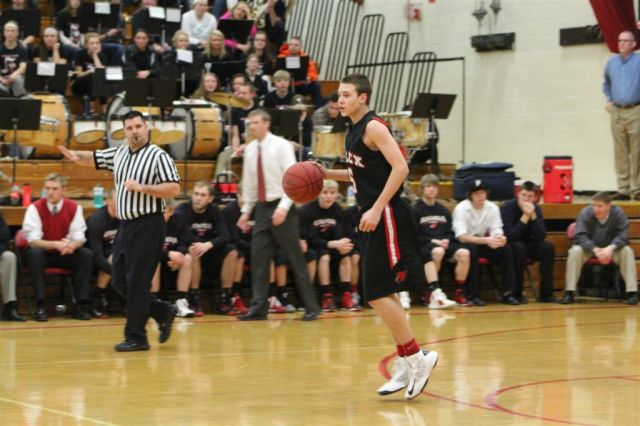 [Good game for young Mr. Bistodeau with 15 points.  Like to see him get stronger, but he goes hard to the basket and scores on a lot of runners.]

[Mr. Krivanek will be back.]

[Noted Alexandrian, apparently related to players on both the boys and girls teams.  And yes, seated below her, is a relative of “A Voice.”] 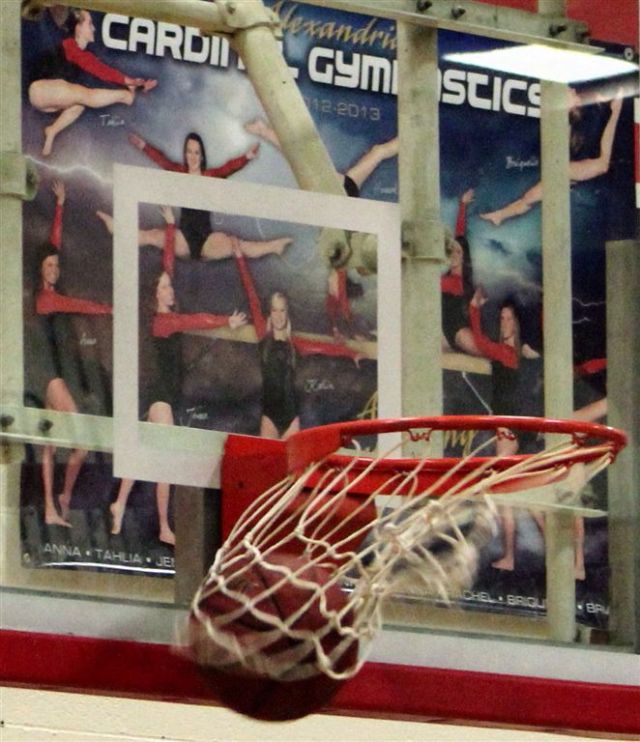 [Attempting a shot known as “The Trumm.”  The bonus coverage in this instance is the gymnastics team in the background.  😉 ] 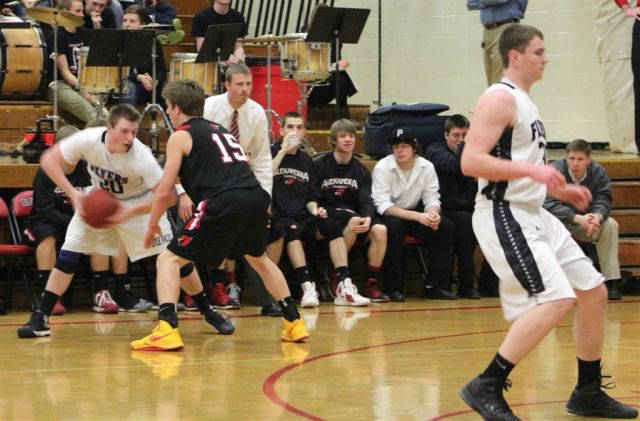 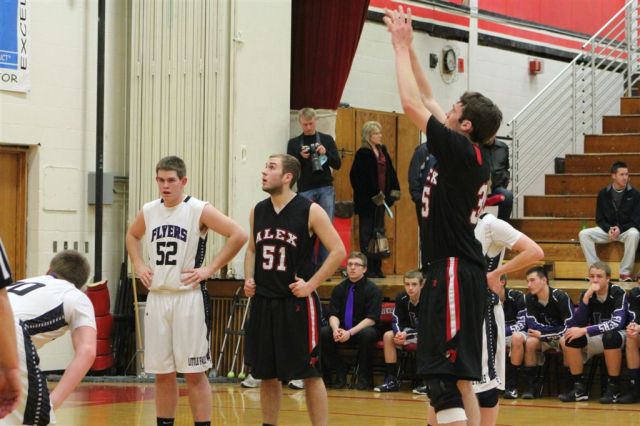 [Logan hits 2, above and below.  Good free throw touch.]

[“The Competition” is at it again.  I notice Ms. Wensman on the far right, a volleyballer in the fall.] 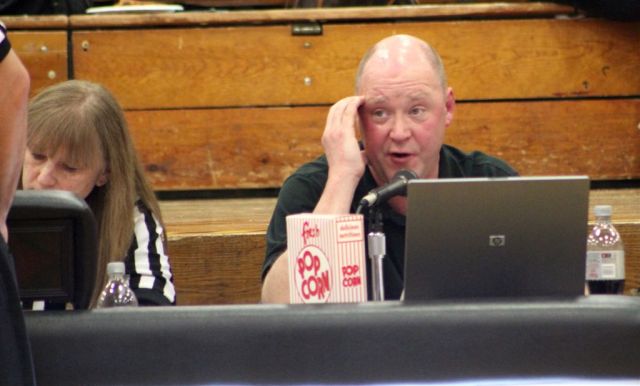 [Also known as the school’s choir director and mostly for being the father of player-of-the-game, Ted Dietz (51), 6’4″ senior.]

[I saw the Cardinals play early last season.  Later in the year I heard reports about a sophomore who was getting plenty of playing time because he was making 3’s from NBA distance.  It was Vogeler.  In the Cards’ previous game to this one, he made EIGHT 3’s.  In this game, I only recall three 3’s, but they were from way, way out.  He apparently has a green light if he’s in the building.]

[Logan in the lane.  He was pretty much shut down offensively.  I remember the Flyers 6’5″ center as a sophomore (now senior Spencer Lubbers (52), senior) – he’s talented and a wide body . . . and he can hit the 3.  He’s tough.  He had 12 points in the first half, but we don’t want Logan following him out to the 3-point line.] 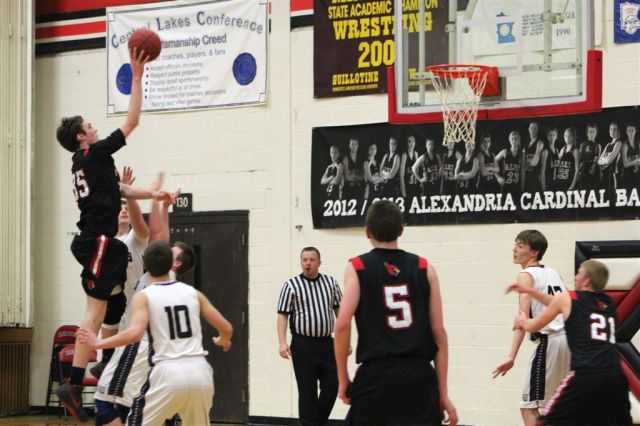 [Here Logan made a nice shot in the lane.] 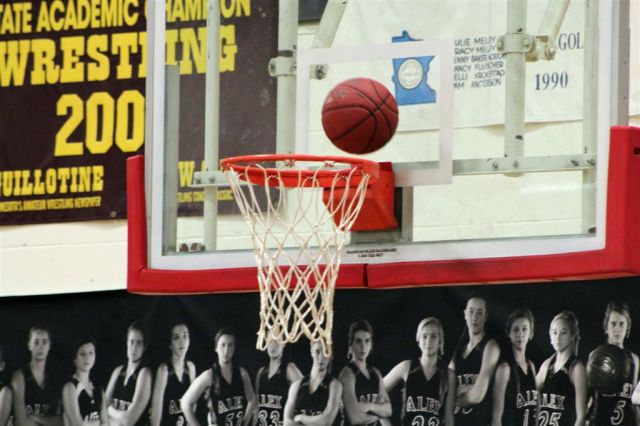 [Unfortunately, this appears to be the only photo of Mr. Dietz (51).  He was player-of-the-game because he took a couple of charges in the 2nd half when the game was still in doubt, played good defense and rebounded well as one of the few Cards who could match the Flyers’ size and strength.] 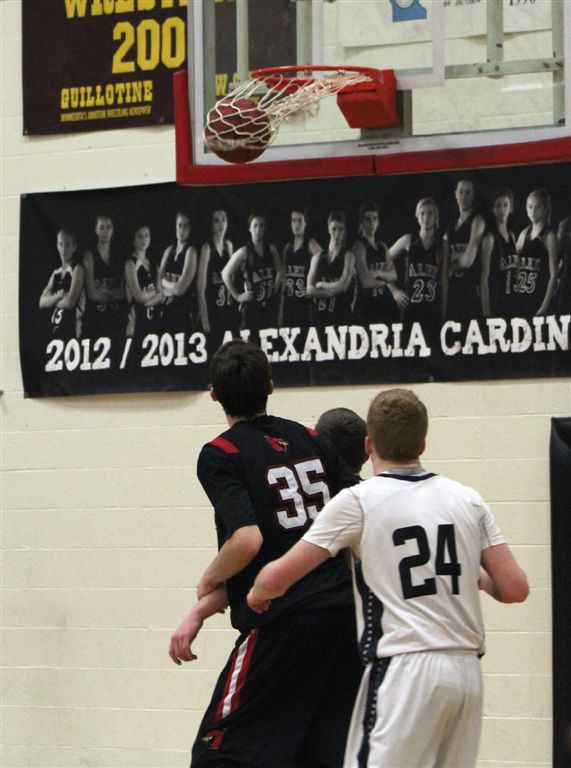 [The game was close until the end.  The Cards shot 25 free throws in the last 4 minutes as the Flyers fouled to catch up.  The Cards were 25 – 35 from the line for the game.] 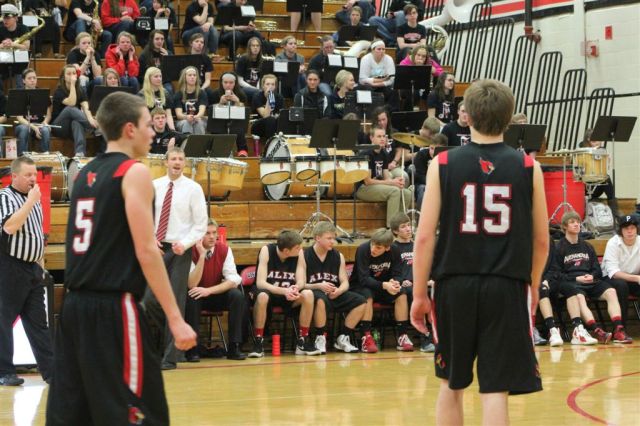 [Don’t foul, make free throws, and do your homework!]

[I can’t believe the band (known for their instruments) stayed for the entire game?]

[What’s taking so long?  We’re all still in the same positions?]

[I thought the Flyers, as a team, had an overall advantage in size, strength, and athleticism.  They were a team of strong, quick footballers.  It bothered the Cards all game.  They would take the ball away in tie-up situations, they would follow their shots and put in the offensive rebound, and I don’t know how many times a Cardinal would get a defensive rebound and a Flyer would simply take it away from them and lay it in!  But the Cards had the two special players, above – and they make the difference for any team in any sport.   Logan had a tough game offensively, but he still controlled the game with his defense and rebounding.  I don’t know how many shots he blocked or how many rebounds he had, but he simply skies above the masses.  Most of his rebounds are taken well above the rim.  And John seems to have unlimited range on his shot, but can dribble drive as well – he had 30 points (and made almost all his free throws).]

[Can they keep doing it?]

[Game over.  There are two Cardinal moms (not of these basketballers) who are unabashed fans of the Fat Boys Walking Club (though they would be startled to hear that) and were allegedly at this game, on the far side, and saw me taking photos.  I cannot find them?]

[Happy Birthday to Mom, who would have been 90 today.  An original example of the need for Title IX!  🙂 ]