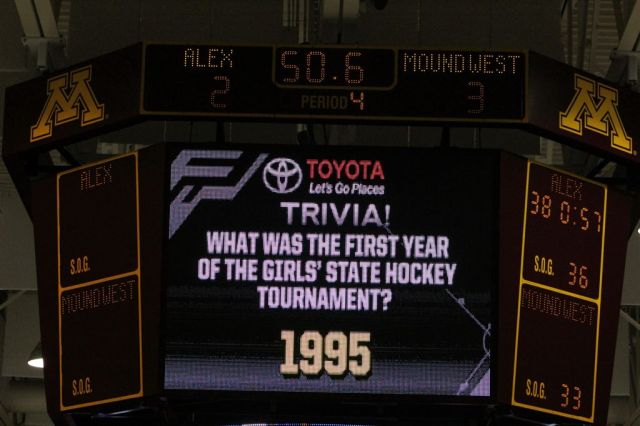 [This one was a heartbreaker.]

After our fine dining experience after game one, the elderly Super Fans meandered back to the ‘X’ to scout our next morning’s competition.  We sat among a group of Red Wing fans, who were there for the same reason, with whom we again made our case that the Cards had outplayed, if not outscored, their Wingers.  They were good natured about our ribbing and complimented the Cards on the good game.  The game went as expected – the private school super power, perennial class favorite, and multiple times state champion, The Blake School (as I may have mentioned before, never play team whose name begins with “The” and ends with “School” – that means they likely recruit the lower 48 and Canada) defeated Mound Westonka, though the White Hawks played them close until the end.  So, the Cards would have a rematch at Ridder Arena in the morning against a team who beat us during the Christmas holidays at the their place (Becca and Amy were on injured/sick reserve that game).  Thus, we had a little revenge factor working for us.

Then off to our evening’s lodging for an afternoon nap, as we were now totally exhausted from all the excitement of the big city.  We awoke in time for another fine dining experience at the closest known facility to our location – Champps in Woodbury.  The place was totally packed – I think it was happy hour – and we were “forced” to endure the Gopher men’s basketball team’s debacle against Ohio State, featured on the several hundred TV’s in the place.  The Gopher’s appeared to have recovered in their next game:

[Photo on loan from the StarTribune.]

The next morning we trundled across the parking lot to our next fine dining experience – at Denny’s.  It was memorable only because our young waitress good-naturedly endured elderly people trying to comprehend a breakfast menu.  We tipped her accordingly.  Then it was on to Ridder – I pulled up next to the arena to unload my passengers who were graciously helped over street-side snow piles by the also arriving Iverson family.

[Family and friends in the neighborhood with Cardinals-on-a-stick.] 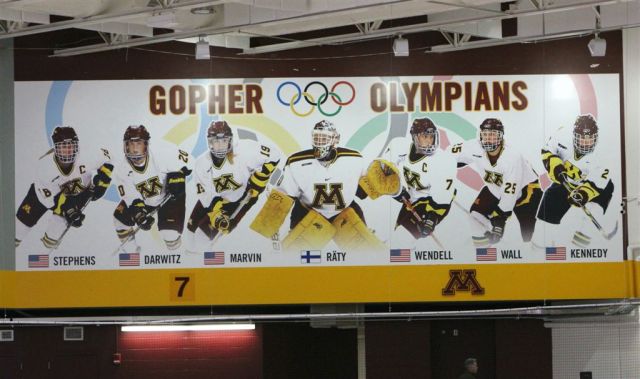 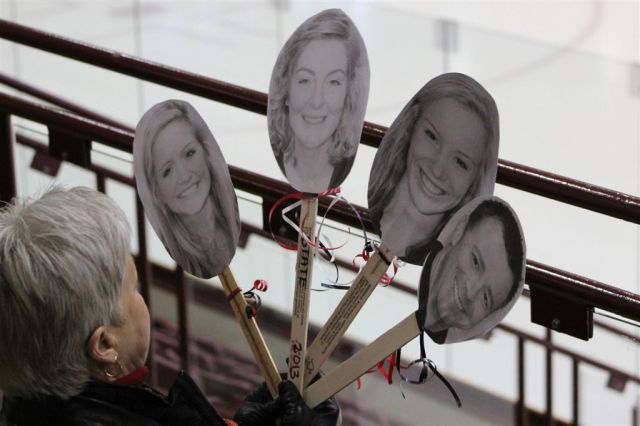 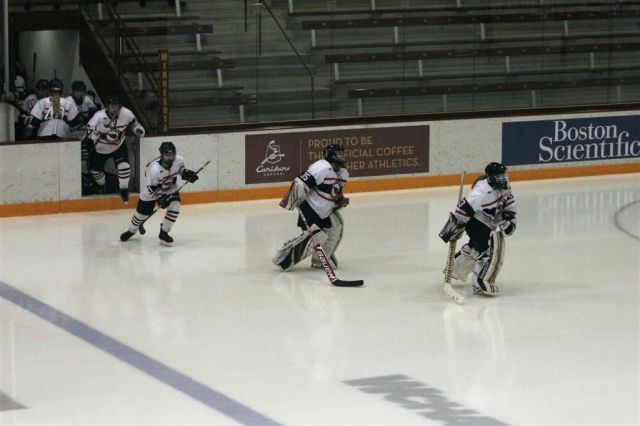 [And here come your Alexandria Cardinals!] 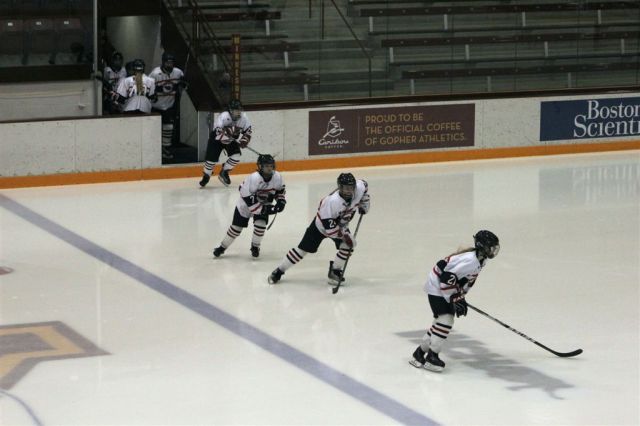 [And “The Voices” were on hand.  They could be seen at the ‘X’ only by telescope.] 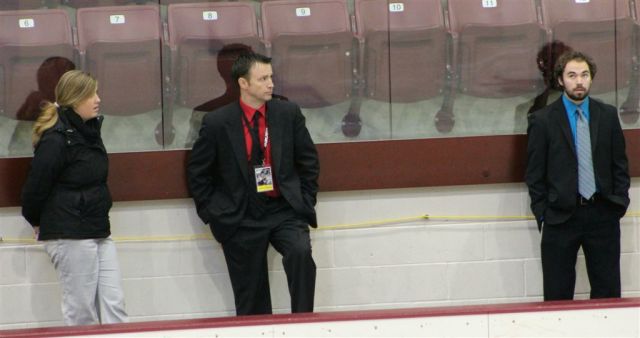 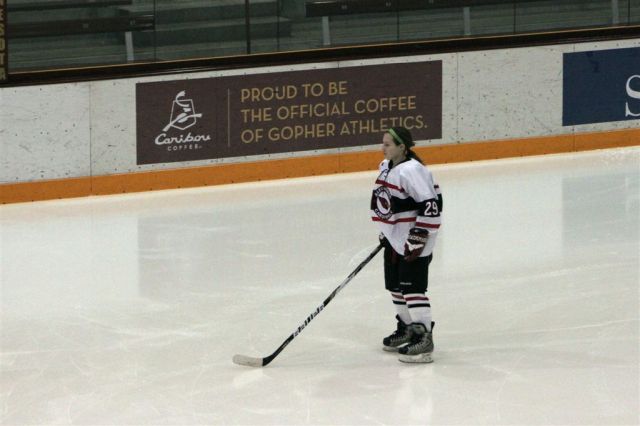 [Shanee’ (40) fires it into the zone during what was to be an evenly played game between evenly matched teams.]

[Then she poke checks on defense.]

[High traffic area involving line changes.  Unbelievably, we did not receive a too many men on the ice penalty, which usually happens any time the puck is in the area where we’re changing lines.] 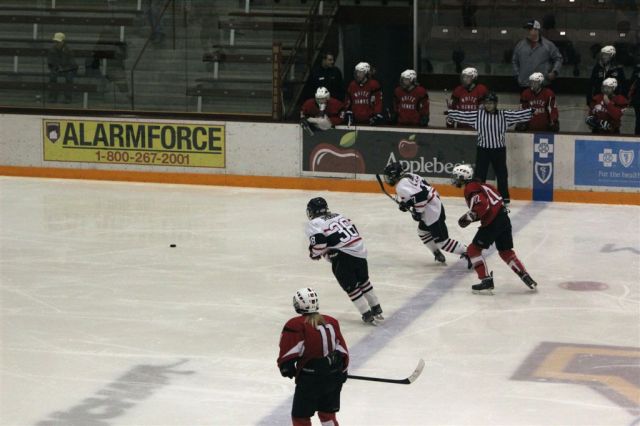 [Shelby’s line in the zone.]

[Taylor’s line in the zone.]

[Taylor draws the puck back to Nicole.] 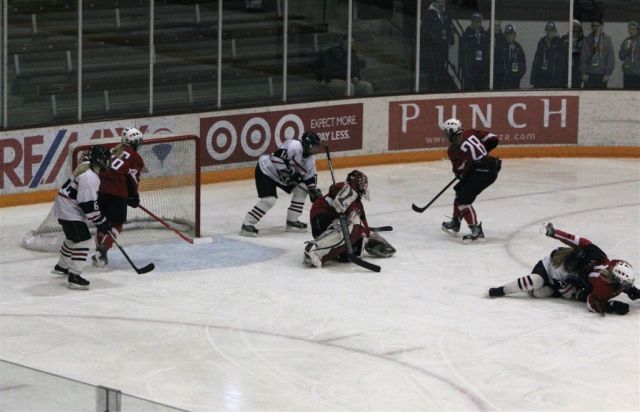 [Oooohhhhhhh!  (Usual fan reaction when a flurry around the net results in several near misses!] 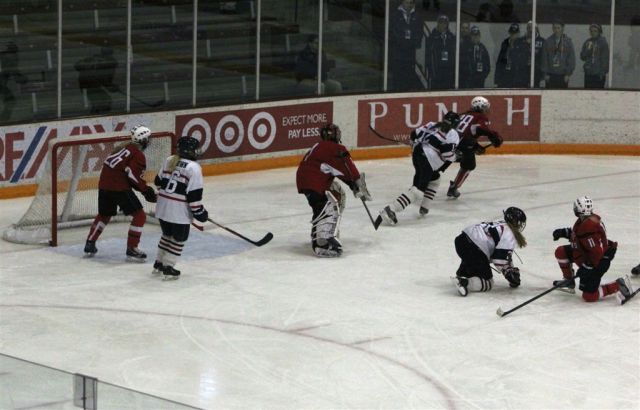 [Here it comes again – the Cards have the puck surrounded, Shelby heads to the goal.] 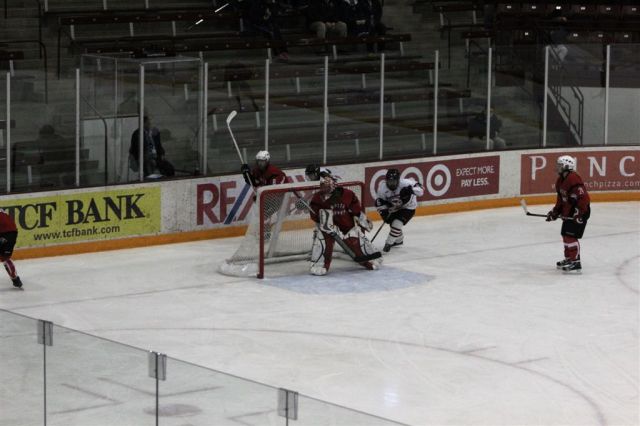 [Running out of Ooooohhhhhhs!  Mel on the doorstep again.] 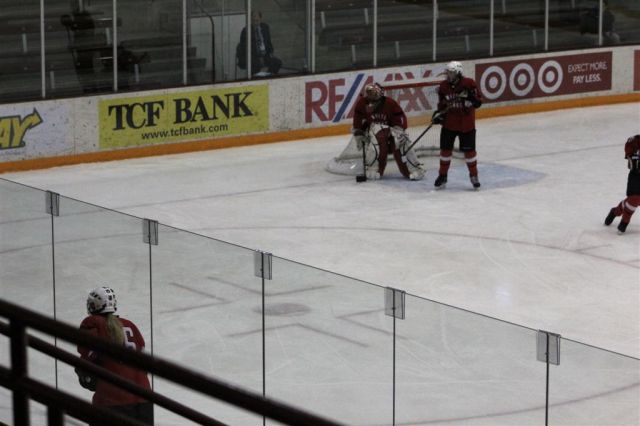 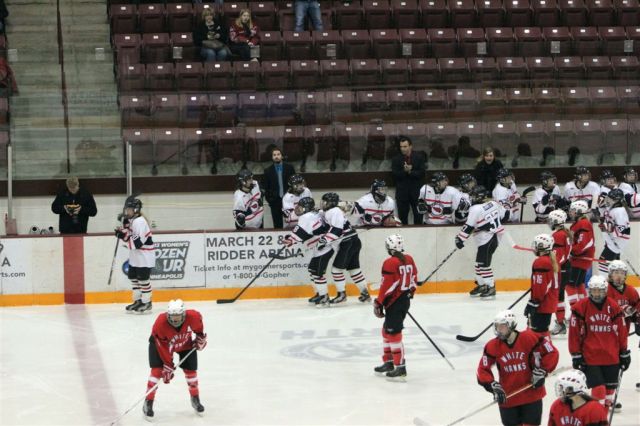 [After all that pressure, Shelby finally scored . . .]

[Mel in period 2, a portent of things to come?] 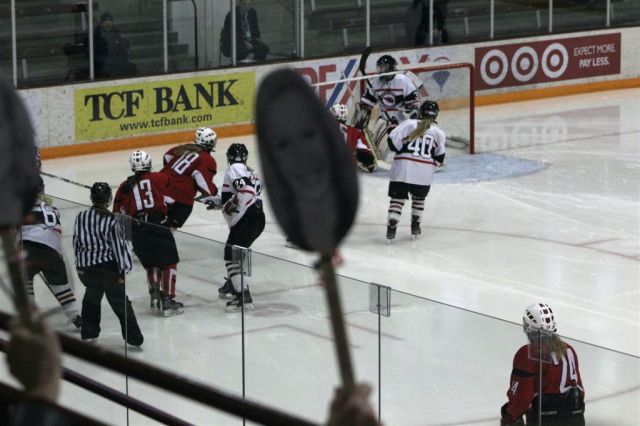 [Mari chases it in – continuing good play from line 3.] 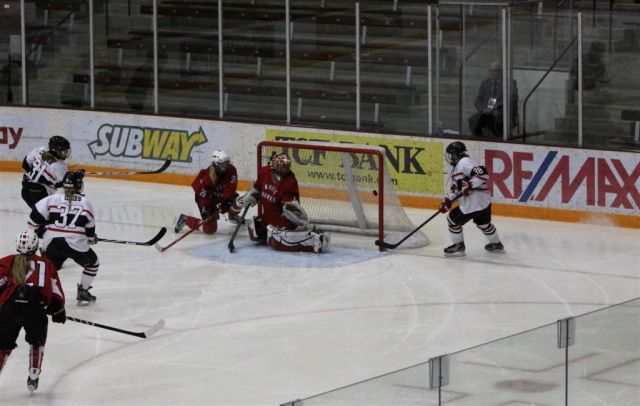 [That’s more like it – Anna, Becca, and Shelby with another scoring chance.  How did that puck not go in?]

[And Anna’s right there!] 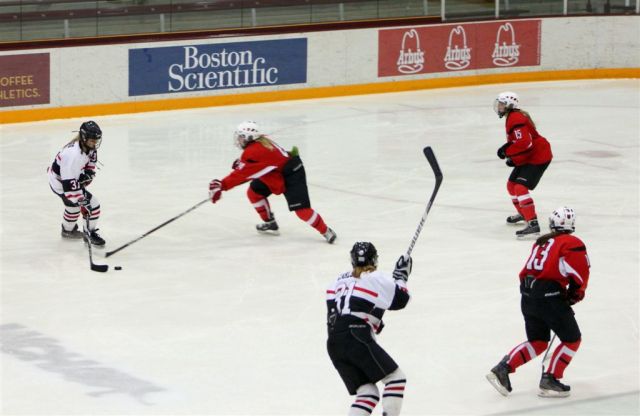 [Becca and Anna moving in.]

[Can you find the puck?] 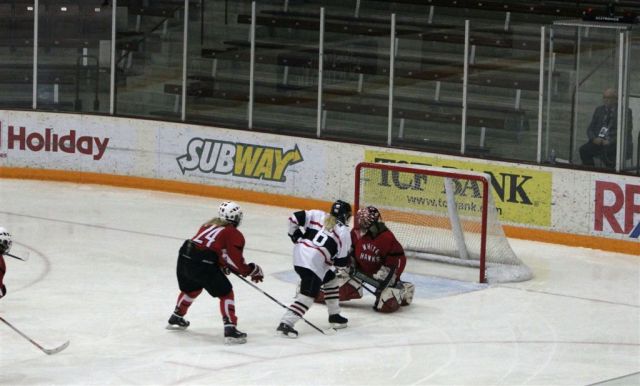 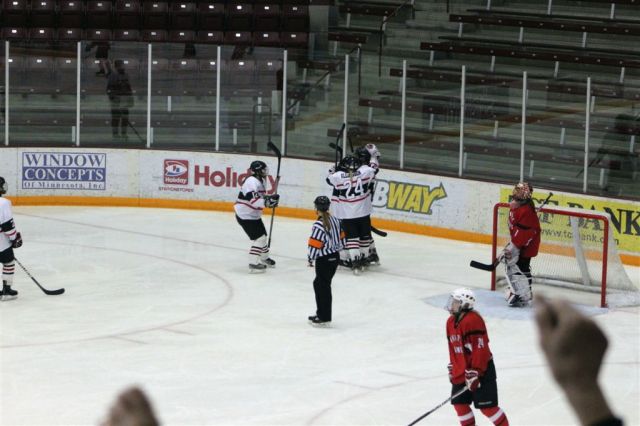 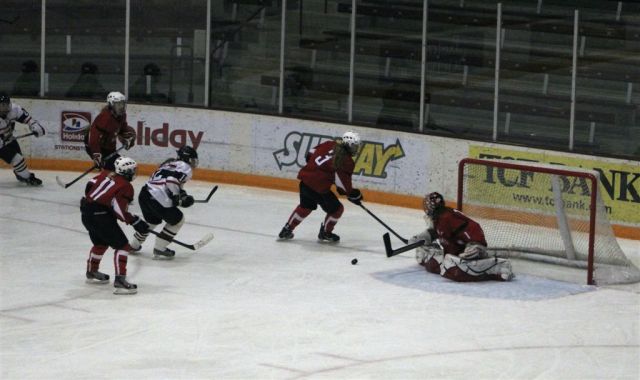 [And here we come again.]

[Mel, Taylor, Madi looking for that all important 3rd goal.]

[A hockey mom (?) stands in anticipation of a score.] 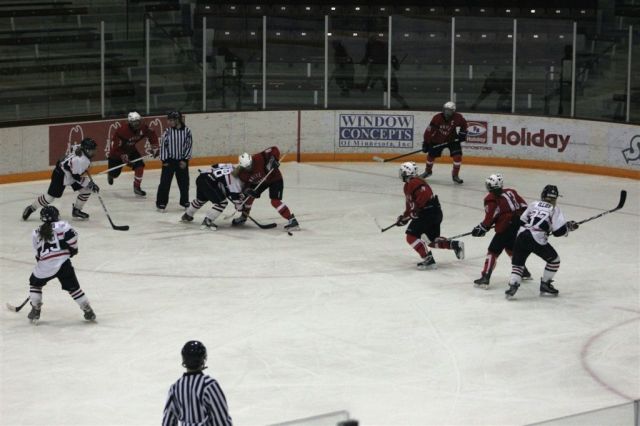 [Though obviously not here, the White Hawks scored with 2 minutes left in the period.  The Cards would take a 2 – 1 lead into the final period.]

[Let me out of here – I’m claustrophobic!]

[The final period begins.  Taylor’s line takes the face-off.  I didn’t realize it at the time, but I think Becca played the last half of the game on a leg and a half.  She was hurt in the second period and was helped off by a teammate.  She hurt her knee and didn’t appear to have her usual speed the rest of the game.]

[The young defensemen, Lauren and Nicole, chase down the puck.] 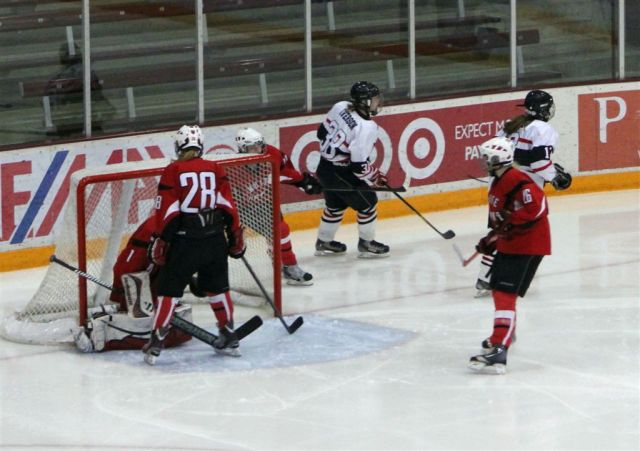 [Cards chase down a mid-ice puck.] 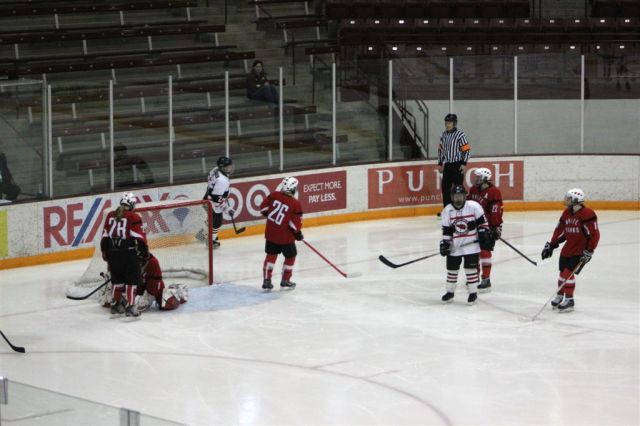 [Becca knocks on the door, bad wheel and all.]

[The future on D, Lauren and Nicole.]

[Tangle in the Cards zone.] 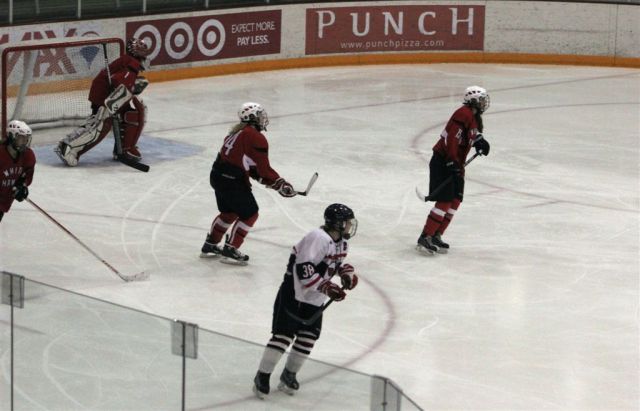 [Shelby one on four.]

[Mel’s racing for the elusive puck!] 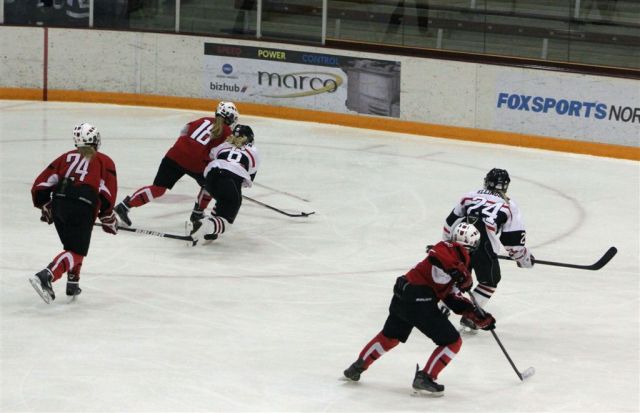 [Trying hard to hold the zone.] 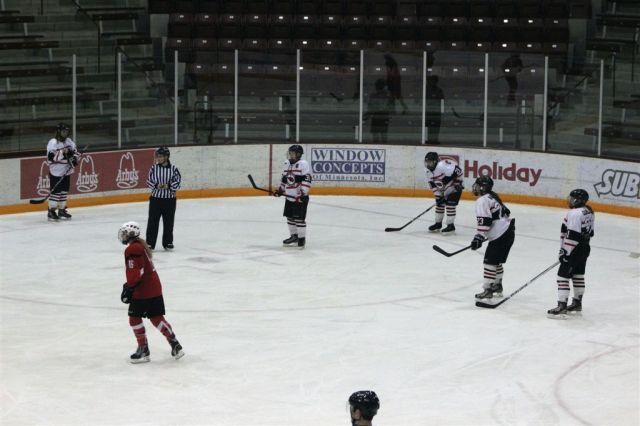 [Coming down to the end.  The team fought off about a minute and a half 5 on 3 situation in the period, further contributing to the natural fatigue of the 2nd game in two days.  The White Hawks tied the came with about 8 minutes to go. 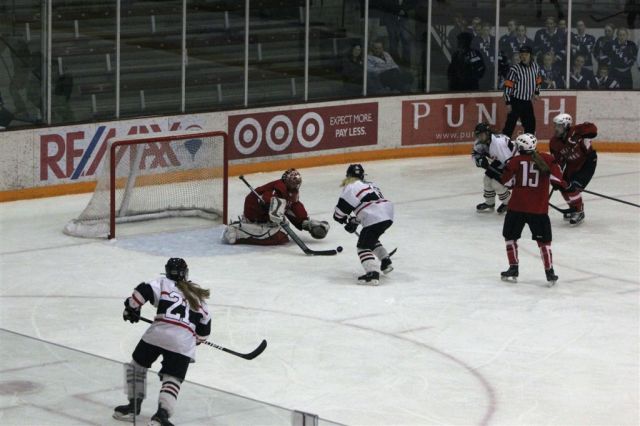 [The Cards looked beat at the end of the 3rd, but they came out flying in OT and dominated play.  Here was another “Awwww, shucks!” situation.]

[Oooooooohhhhhhhhhh!  The crowd stands in anticipation!]

[Then, as so often happens in these situations, the Cards got an accidentally penalty and Mound Westonka won on a power play.]

Congratulations again to the team for a terrific season.  You lived up to all expectations – we thought this would be the best team since the state championship year, and you were!  And it’s never chopped liver to make the state tournament.  Thanks again to the six seniors.  It’s been a pleasure watching you play through your careers.  Best of luck to all of you in your futures.  And come back and see us at some games next year!  Oh, and tell your parents they can join the Super Fans next year – all we request is that they bring cookies!

p.p.s.  Final tournament thoughts.  After the semis, I predicted a state championship for Blake over No.1-seed Warroad.  Blake had too much team speed.  And I look forward to Dani Cameranesi playing for the Gophers next year – she was named player of the year, and from what I saw in the tournament, I’d have to agree.  And Alex has now lost the most games ever in the state tournament.  But we should wear that as a badge of honor – it means we’ve been there a lot.  And it’s just about impossible for an outstate, non-recruiting team to win in the tournament.  The private schools, Blake and Breck, and the public schools of Warroad and So. St. Paul, just have access to too much talent year in and year out for the rest of the class A schools to be competitive with them.  There’s been a few times where we’ve said Alex was the “public school” champ!  🙂

p.p.p.s.  A shout out to fellow original Super Fan, Bob “Weakie” Annen.  “Weakie” hit 75 years of age today – three-quarters of a century!  Being a girls’ hockey fan keeps you young and in good health!