In the Perpetual Presence of Talented Women * 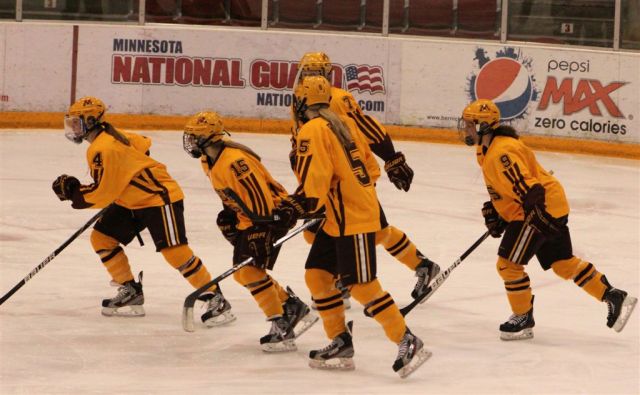 I thought of that as I looked back on yesterday – Saturday.  I was up at my usual what were you doing up at that hour? working on the previous post, senior night for the Cardinal girls’ basketball team.  I completed that post just in time to meet up with fellow Super Fans “Weakie” and Roger and head for the National Hockey Center to catch the final game of the regular season for the Minnesota Gopher women’s hockey team v. St. Cloud State.  The ride home was delayed a tad by a rather longish game . . . and “Weakie’s” desire to hit the White Castle for some “sliders.”  By the time we reached home, I had to immediately sweep up the supervisor and bolt to SAWA for our monthly “date” with Lisa Lynn.

And that was just one day.  I’m so far behind, I decided to jump ahead to at least be momentarily timely while falling further off the pace chronologically.  As I recall, I have yet to post last weekend’s visit to the Cities for a Gopher women’s hockey game and  basketball game as well as the Cardinal girls’ hockey team’s 2-game foray into the state high school tournament last week (and the Boston/DC trip, and the completion of “Victoria Heights”).  I need a raise . . . and a nap! 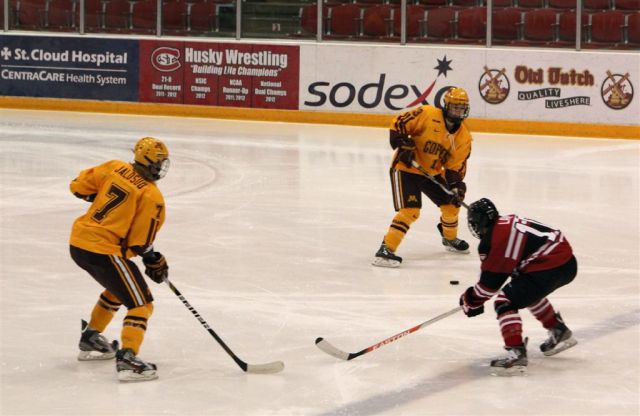 A more complete overview of the Gopher women’s hockey team will follow (at some point) concerning last weekend’s game with Bemidji State.  But as I was really determined to see what is undoubtedly the best women’s college team of all time, one more time, I made the convenient trip to St. Cloud to watch them complete the first ever undefeated regular season.  The 3 – 0 victory over the Huskies, though far from a masterpiece, extended their all-time record winning streak to 42 games!  Probably the most impressive aspect of the team is the size of their defense!  I believe their average height is greater than that of our boys’ high school basketball team my senior  year.  Above we have Mira Jalosuo (7), a 6-foot senior from Finland, playing catch with Milica McMillen (13), a 5’10” freshman from Breck (I believe I have mentioned this before, but if you look at the upper left border of this blog, you will see Milica as an 8th-grader playing for Breck against our Cardinal championship team in 2008).  In the team photo at the top, Mira is joined by fellow 6-footer, Rachel Ramsey (5), sophomore from Minnetonka and daughter of NHL All-Star, Mike.  They are joined by fellow elevated blue-liners, Lee Stecklein (2), 5’11” freshman, Roseville; Baylee Gillanders (27), 5’11” junior, Saskatchewan; and Megan Bozek (19), a relatively smallish 5’9″ senior from Chicago and the Gopher’s all-time leading scorer on defense.  Shortly into the game, an OSHA inspector came in and momentarily stopped play long enough to distribute ear protection for all the fans as the sound of the slap shots rifled from the blue line by this group was ear shattering!

[The Huskies played the Gophers tough all game.] 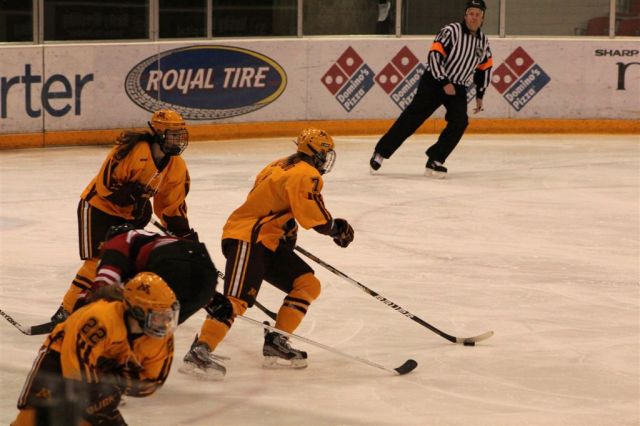 [Mira (7) leads a charge with Hannah Brandt (22), freshman, Hill-Murray.  Sharp guy that I am, it took me several shifts to realize the nation’s leading scorer, Amanda Kessel (8), junior, Madison, Wisconsin, was not playing this day – that was disappointing.  And maybe because of that, it took a while before Hannah, Amanda’s center and the nation’s 2nd-leading scorer, took the ice.  And here I’ll give a shoutout to an old Department of Labor colleague whose neice, Casey Pickett, is the nation’s 17th-leading scorer for Northeastern.]

[When I finally spotted Ms. Brandt between Maryanne and Meghan.]

[Hannah on the face-off.]

[New to the scene is Kelly Terry (10), junior, Whitby, Ontario.  You need a radar gun to track her speed!] 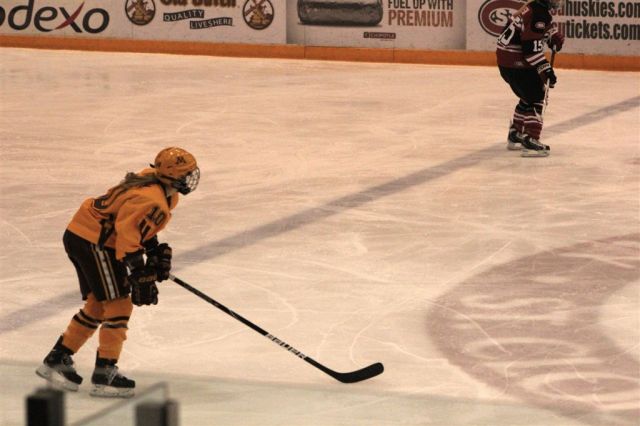 [Rachel – her physical presence is such you don’t need to see her number.]

[Becky – I stood in the ticket line with her aunt for the Bemidji game.  Must be worth something on sister Gretch’s celebrity-sighting scale?]

[Becky and Kelly storm in.] 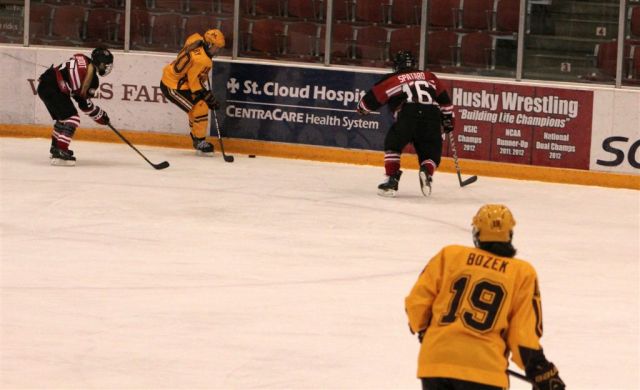 [Megan at a position from which she must have fired 50 slap shots during the game.  You would not want to be on the receiving end of one of them!] 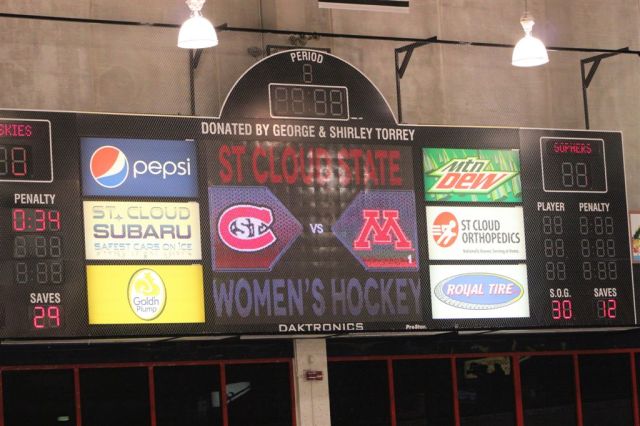 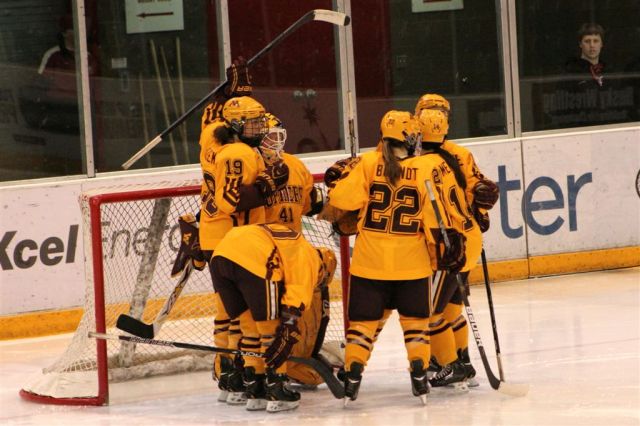 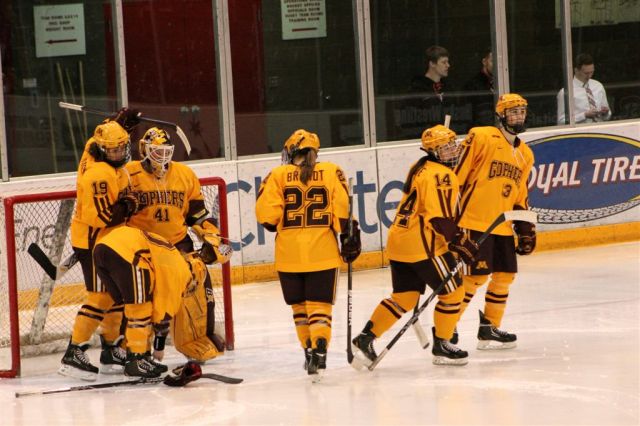 [They are great fun to watch because of their size and speed.  But they were a little out of sync on this day.] 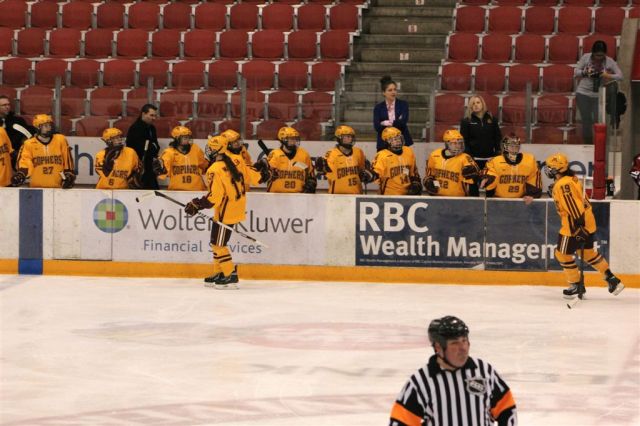 [Becky and Milica scored in the 3rd for the final result.]

[The Gophers last score came on a 4-on-3 situation.  The Huskies also had a player in the box on a 5-minute major penalty.  The referees could not figure out who, if anyone, could come out of the penalty box after the goal.  It went on for many minutes, discussions among the refs, between the refs and the coaches, and all the while the Husky fans are letting them have it!  They ultimately decided no one was coming out – never figured that one out and the Husky fans were . . . not delighted?]

[Noora tried to stay loose during the delay.]

[Then the other leg.]

[The Husky fan in front of us was absolutely right.  I don’t know if it was by design, but the Gophers would just fire slap shots from the blue line on every power play?] 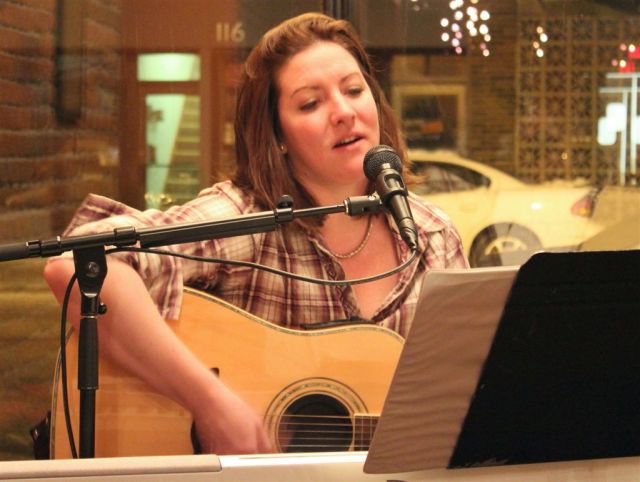 [On to SAWA where Lisa had a young lady do a 2-song stand-in.]

[BFF Lisa Lynn.  We decided it would be a good night to shoot some videos because it was initially rather quiet in SAWA.  Of course, by the time we got around to it, the regular crowd had shuffled in!  Nevertheless, here are 8 videos of some of Ms. Lynn’s favorites.]

“Somewhere Over the Rainbow”  http://www.youtube.com/watch?v=RRjE1jrhwNM

[Son-in-law Danny arrived from Indiana about half-way through Lisa’s performance.  He’s heading up north for a week.  He had a good time here.] 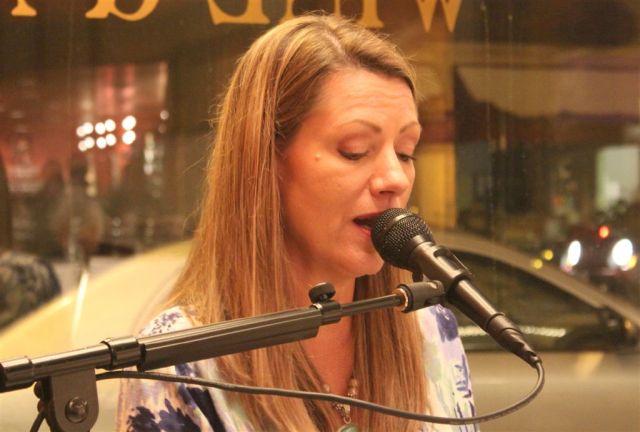 “The Law and the Lonesome”  http://www.youtube.com/watch?v=ghnzyXAQ_xw

In case you missed the following!  🙂  I lasted through the 2nd overtime.  Contrary to my prediction, the Skippers came back the next night and won the state championship, 3 – 1.

The girls’ state hockey tournament is certainly one of my favorite events!

And hooray for the Cardinal gymnastics team!  We have not been competitive in gymnastics for years – then this year, wow!  And watch for Briquelle in the state track meet – she’ll have a shot in the high jump.

Even Basketball Dan has at least acknowledged the existence of a girls’ sports bandwagon by sending the following:

(She subsequently went on to duplicate the shot for the Harlem Globetrotters.)

And finally – hey, how ’bout that hoar frost this morning? 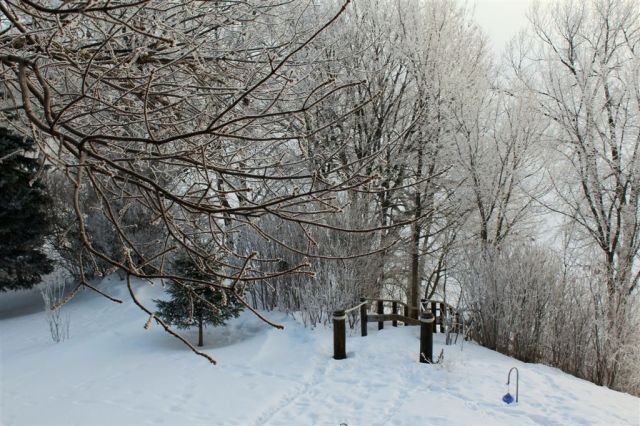