At the end of the 2nd period in last night’s girls’ hockey game v. Sartell/Sauk Rapids, the Super Fans leaned back, collectively caught our breaths, and then looked at each other and asked, “What the heck was that??”  A consensus rather quickly emerged among us that in all our years as extraordinarily knowledgeable girls’ hockey fans, it was the best period we had ever seen any Cardinal team (or any other team?) play!  When the period stats were consolidated and posted by Price-Waterhouse, the Cards had a 21 – 3 shots-on-goal advantage . . . and it wasn’t that close!  The number of other shots that either missed the goal or were blocked before they got there was probably double that.  All three lines and the four defenseman were flying around the ice like their hair was on fire, passes were connecting like we’ve never seen before, and on those rare occasions when the Stormin’ Sabres were able to get out of their own zone, the Cardinals would recapture the puck and storm right back in again.  We’ll resume the game’s storyline as soon as . . .

[Editor’s note:  Super Fans Roger and Dusty sang the National Anthem last night.  The team has never lost when they have done so  The pressure, on both sides, is palpable.] 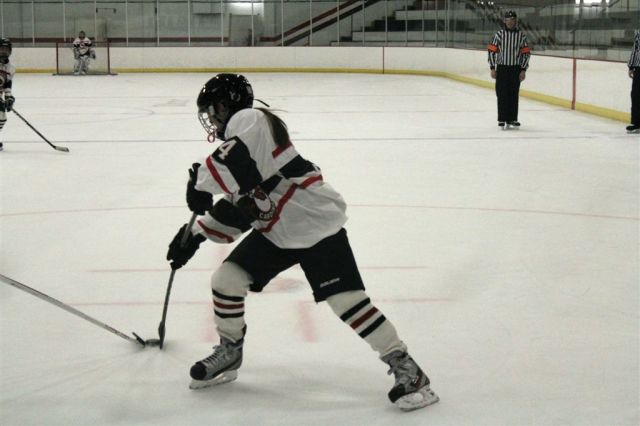 [Always wanting to give the JV their due, we got there in time to see the end of the 2nd period and all of the 3rd.  After the 2nd, the game was tied 1 – 1 with the Cards holding a nice shots-on-goal advantage.  Rachel Drew above.] 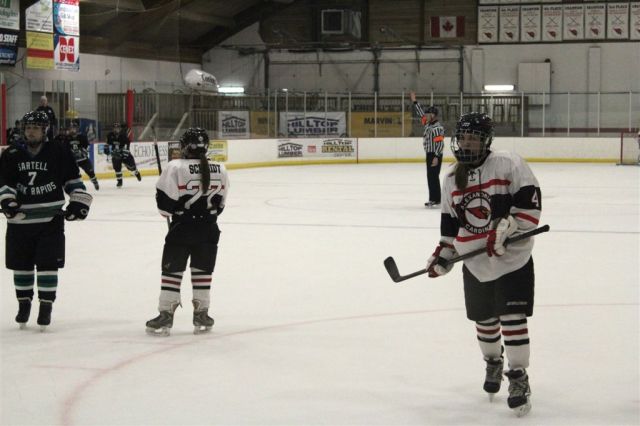 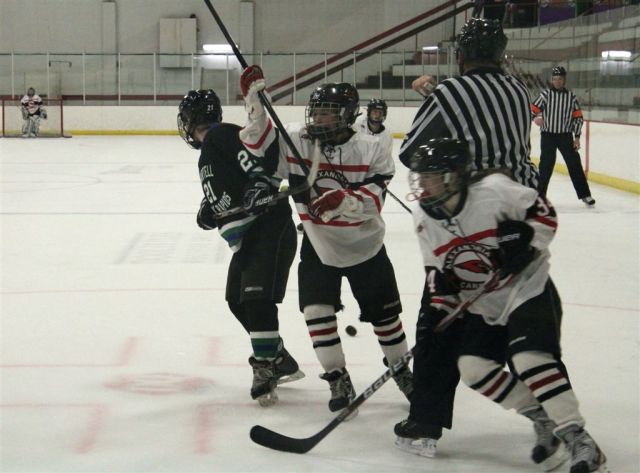 [Why we love the RCC – the domed roof really gives the place a feeling of roominess.] 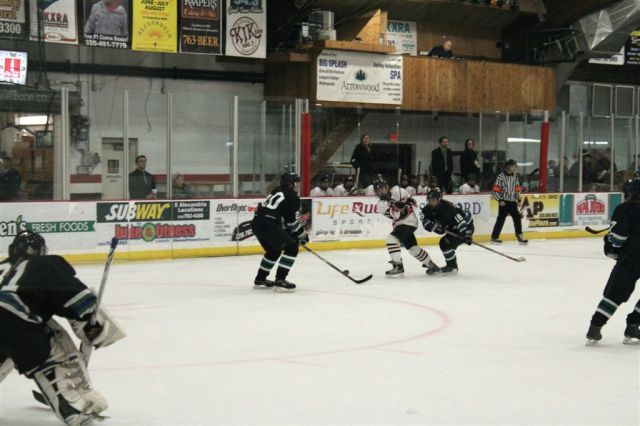 [If it’s No. 17, it’s freshman Mackenzie Abrahamson, with a long shot.] 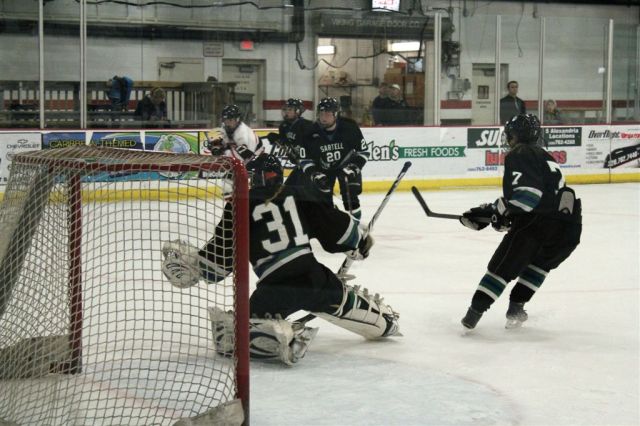 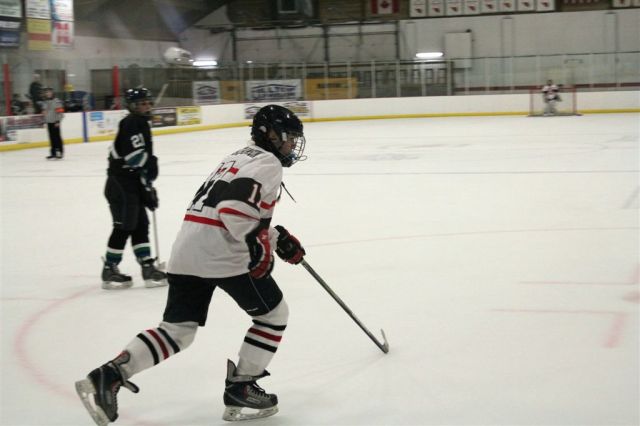 [And here she comes out the other side.] 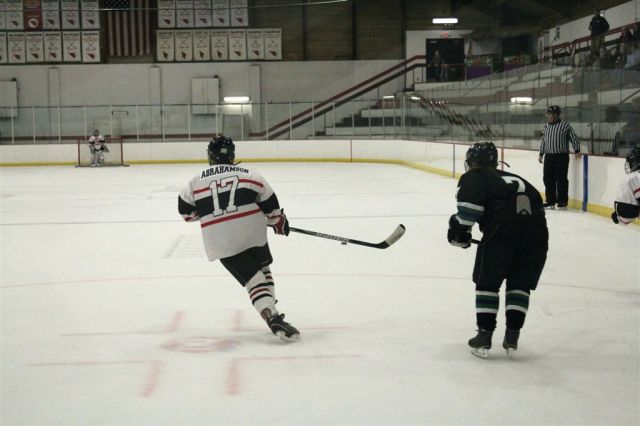 [Then heads back up ice to try it all over again.]

[Varsity co-captains Shanee’ Herd and Shelby Iverson.  The universal response to this photo, so far, is “Awwwww!”  (OK, it was sent to their moms!)  :-)]

[They were warming up on the runway before the varsity game.  I couldn’t decide which photo I liked better, so here’s both.] 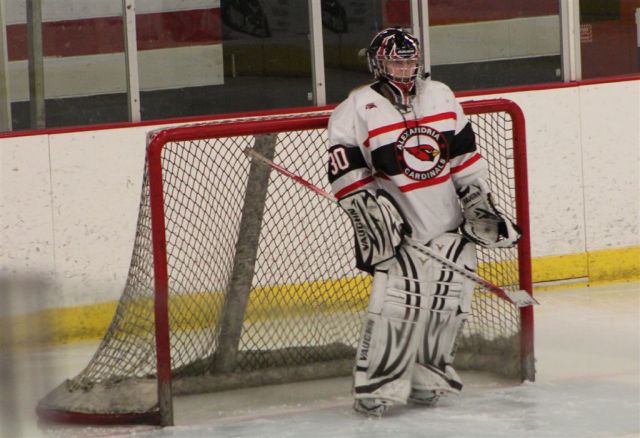 [I believe this is our first coverage of freshman goalie Taylor Coker (30).]

[So, let’s give her a double-header.]

[Ms. Revering (29) played the 3rd period of the JV game, then all of the varsity game.  Younger players such as McKenzie often play in both games – but a player can only play a total of 4 periods in the two games.] 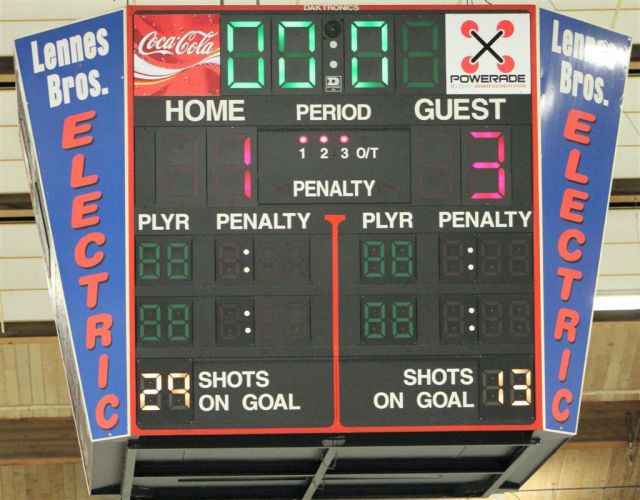 [JV played well – a more than 2 – 1 shots-on-goal advantage.  Unfortunately, in the 3rd period they allowed two Stormin’ Sabres to assault Ms. Coker’s kitchen without a chaperone.]

[The varsity game – early on Taylor attempts to reprise her hat trick from the previous game.]

The above was a rare 1st period highlight.  The Stormin’ Sabres came into the contest as the undefeated (in conference) conference leaders – their only blemish a home game tie with our Cardinals.  And for 2/3 of the 1st period they had the Card faithful wondering, who is this juggernaut?  The Stormin’ Sabres totally dominated the 1st 10-12 minutes of the game – the Cardinals couldn’t get out of our end – and at one point held an 11 – 1 shots- on-goal advantage.  Their passing was tape-to-tape, and as “Weakie” was loathe to point out, their No. 11 was big and fast.  At this point you kinda get the idea that both goalies were on their games – and for the Cardinals that was freshman Amy Jost!

[I’m at a loss?  We don’t have a left-handed center?  Anyway the Cards finally started feeling their legs, and we started getting back in the game.] 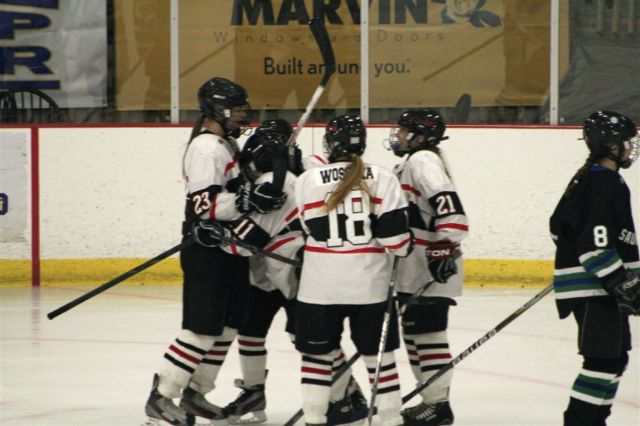 [Then Hanah scored!  At first it was announced as Nicole’s goal, which would have given her the 1st goal in each of the last two games.  Then they changed it to Hanah (Nicole assisting) – and though we didn’t realize it at the time, it must have been her first varsity goal because they tossed the puck to the bench!  🙂 ] 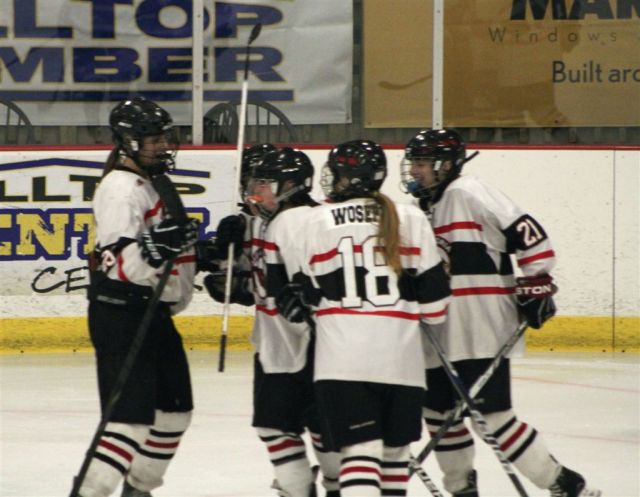 [Now just get to period break with the lead.]

[After one, we were back in play!] 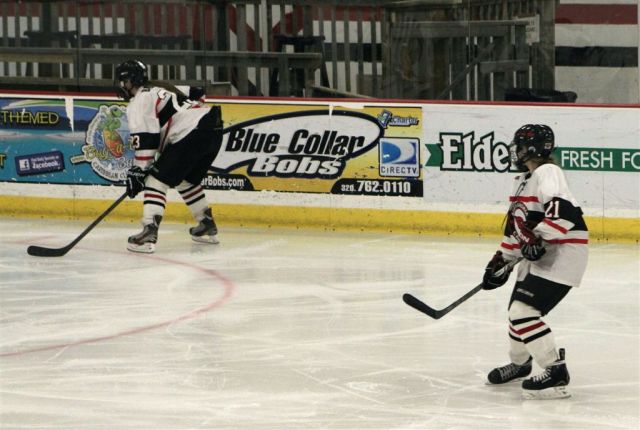 [Nicole (23) and Lauren (21) paired on defense, a sophomore and freshman.  The other defense pair is Shanee’, the old biddy of the group, and 8th-grader McKenzie.  We’re pretty set at that position for a while!  🙂 ]

We gotta a little sloppy in our end early, and to their credit, the Sabres tied it with an uncontested close-in shot.  That riled the Cards because then the onslaught began!

[The defense really pinched early and deep in this period – see Nicole above – apparently in the belief they could recover.  The strategy really made it hard for the Stormin’ Sabres to clear their zone.  Oh, and there’s “Weakie’s” No. 11 – she was impressive.]

[Taylor at the point.  No problem, she was a defenseman before converting to center.] 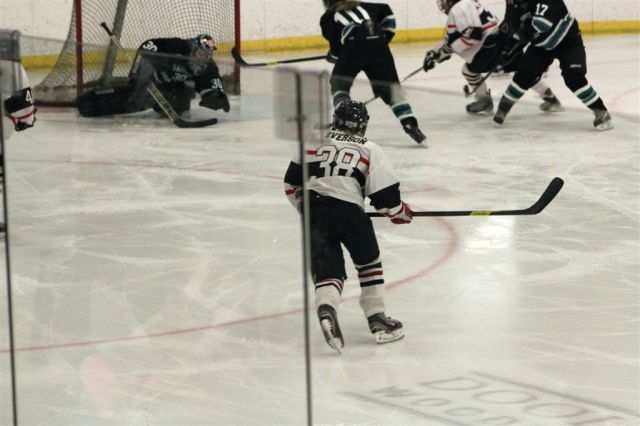 [Shelby and Becca move in.]

[The Shelby, Anna, Becca line.  I was thinking the SBA line, but better yet is the “ICI” (French “here”) line for Iverson, Carlsen, Illies?  😉 ]

[The whole Stormin’ Sabre team seemed to cluster around their goalie the whole period – it did make it hard to get shots through all the traffic!] 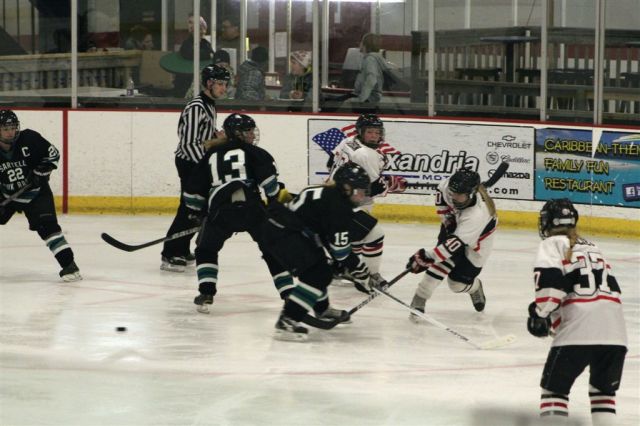 [Shanee’ fires one from the right-side face-off circle.]

[Anna sweeps one toward goal.]

[Mel, Madi, and likely Taylor cause a puck freeze.]

[Stormin’ Sabres clear the puck from the goal mouth.]

[Appears to be Shelby on another face-off in their zone.] 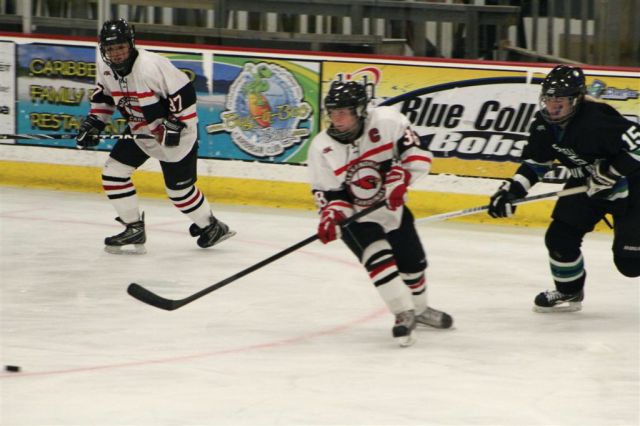 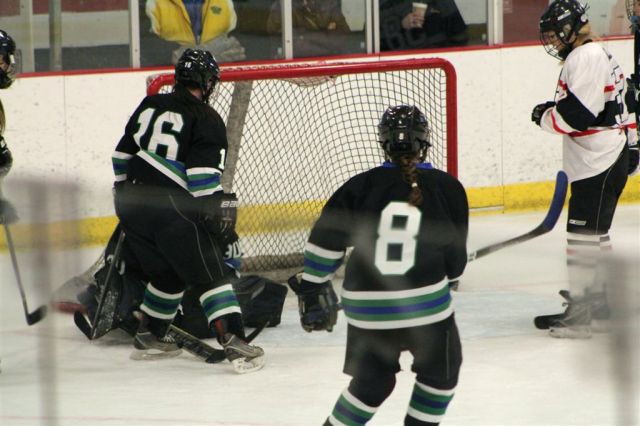 [Becca looks on as the goalie traps another loose mouse.]

[And some Becca and Anna again!]

[Hooray for our side!]

[Finally, after a continuous series of constant pressure, the Cards got the lead back.  Becca hit Shelby with a terrific diagonal pass, and Shelby niftily back-handed it into the near corner.  🙂  ]

[Period over.  Sara Schmidt’s mom tries her hand at the Puck Shoot.  The other two contestants, also hockey moms, both put it through a $25.00 slot – the first time we can ever recall there being two winners!] 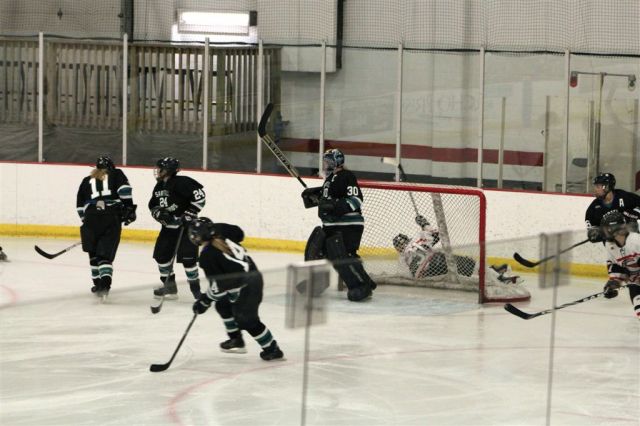 At the start of the 3rd period, it seemed unlikely we (or anyone) could maintain the pace of the 2nd!  We weren’t playing Chopped Liver, afterall (although they have picked up their game this year).  But it’s nice for the team to know they have that in them – and when they play that way, they should be able to play with anyone.  The tempo of the 3rd period became disjointed – we got a couple of penalties that made me, and my fellow fans, quite grumpy.  Between penalties and the exertion of the 2nd period, it became hold on and win time.  The 3rd period was pretty much a draw.

[If we win, we’re going to D. Michael B’s for some serious comfort food!]

[Becca thinks, “Can I beat everyone to it?”]

[Don’t look now but there’s an old guy in the stands taking our picture.  BTW, do you guys know D. Michael B’s?] 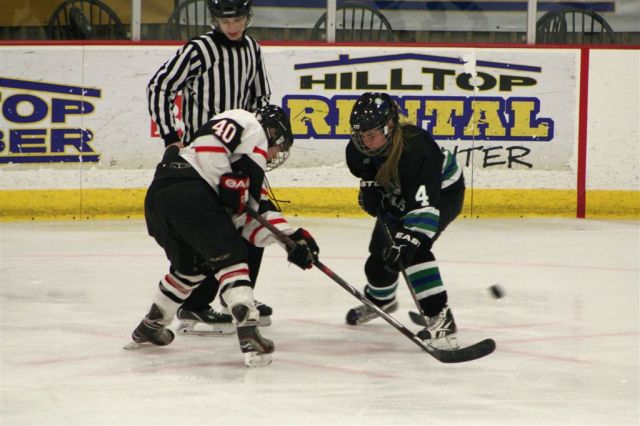 [This was a new twist.  Shanee’ taking powerplay face-offs in the offensive zone.  The thinking was probably with her strength she could just shoot – which she did, several times on goal.] 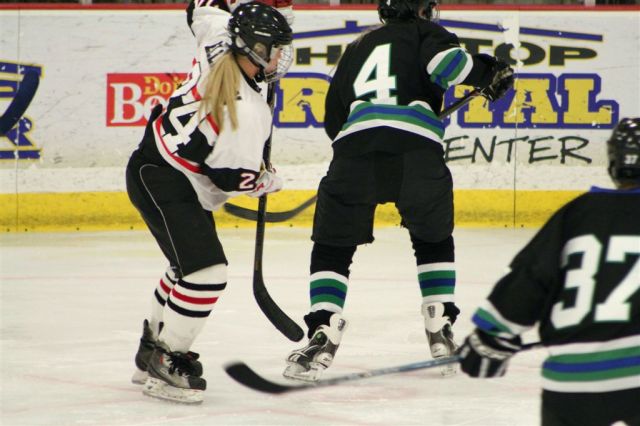 [And a nice shoulder manuveur.] 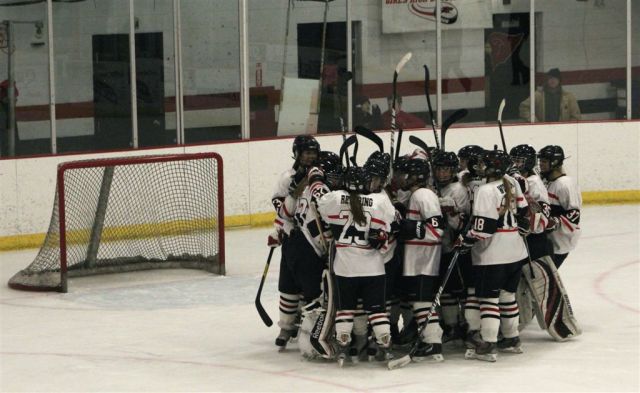 Reminder:  Girls’ hockey fundraiser tonight at the Eagles’, 5:00; girls’ basketball hosts the state’s No. 1-ranked team, Fergus, at 7:30; and tomorrow night girls’ hockey hosts a powerhouse No. Wright County team, 7:00, another Metro-area team that draws from a population base of about a gazillion.]