Based on the apparent age of youngest brother Cam (held by Mom on the right), this would be the summer of 1955.  Victoria Heights was just developing as Alex’s first “suburb” – we were two miles out of town!  That made us the first group of young’uns to go through the school system as neither townies or farm kids.   We were in the Twilight Zone?  The empty lots across the street all were “housed” within just a couple more years.  We’re looking toward the NW here from our front yard, toward the Runestone Park at the top of the hill, photo center.  And probably because of our “isolation,” and all the kids being the same age after-war babies, everybody knew everybody else, including the parents, the kids, and the family dogs. 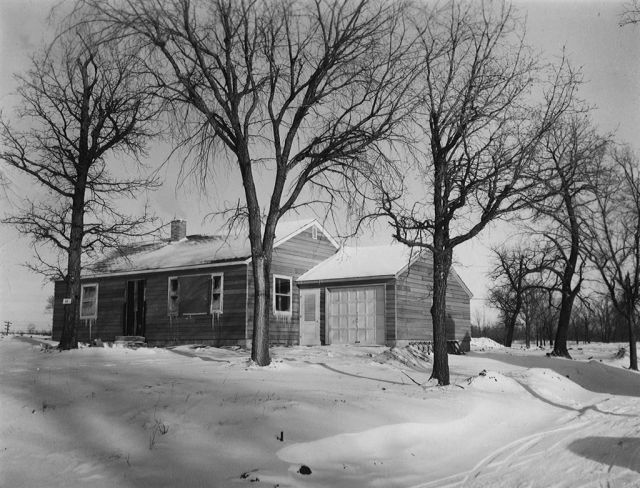 [Our house, likely the winter of 1950-51.  We were the 3rd house built in the Heights (as I recall).  So you can see why Mom, who was a Minneapolis girl, thought she had moved to the moon!] 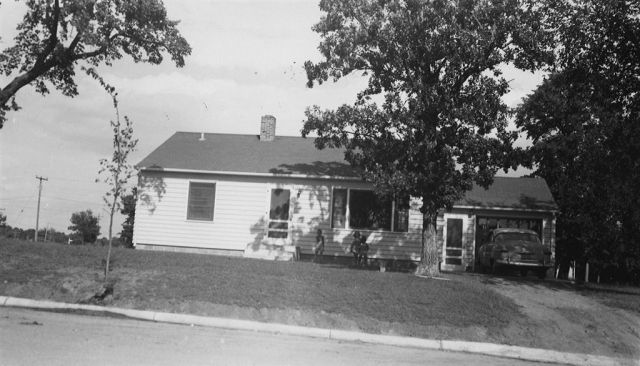 [The same house, subsequently completed, and not in the winter.  There appear to be munchkins gamboling in the front yard!  This was everyone’s standard rambler – living room, kitchen, 3-bedrooms, one bathroom, one-car garage, a well, a septic tank, and a partridge in the pear tree.  And every family had at least 4 kids – how did we do it?  OK, OK, I know peers who didn’t have running water or electricity in the early 50’s.] 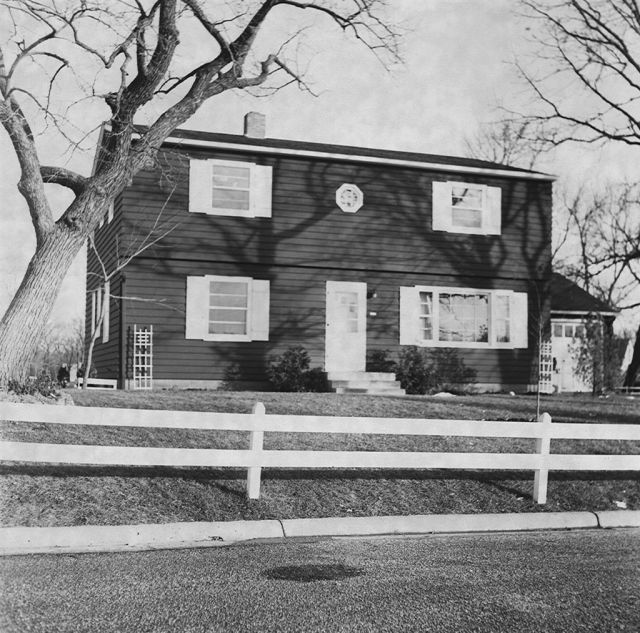 [In 1962, the folks added a 2nd floor with 4 more bedrooms and another bathroom!  The life of luxury.  You will note the tree of the left forms a “Y” – I would place kick field goals from the top of the steps through that “Y.”  We moved East in 1966 – Larry and Laura McCoy have lived in the house since then.]

[The stairway to the new 2nd floor.] 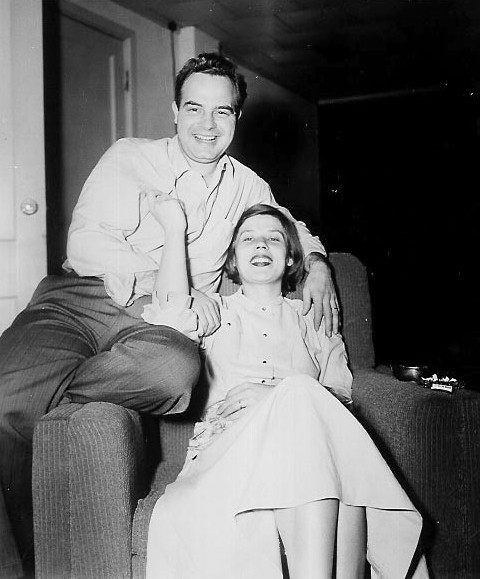 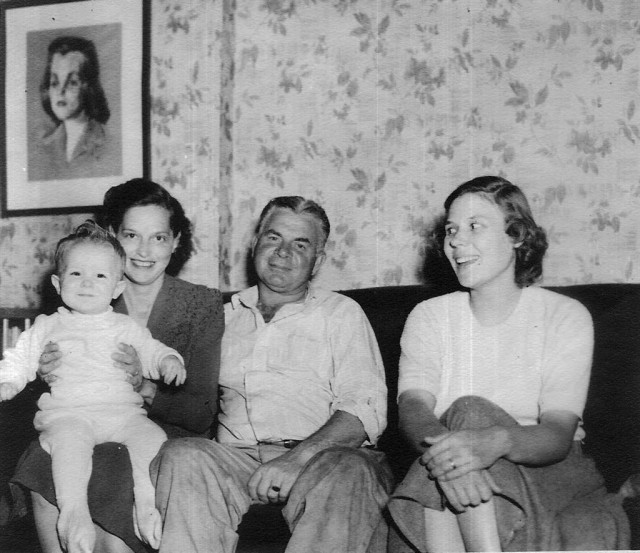 [I was first, with Grandma and Grandpa Obert.  We weren’t in Alex yet.] 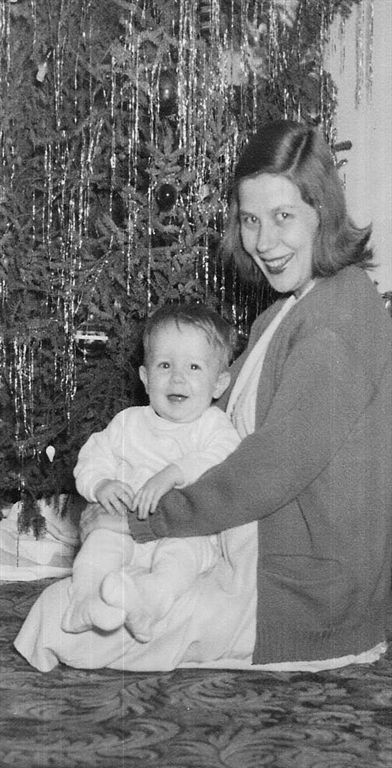 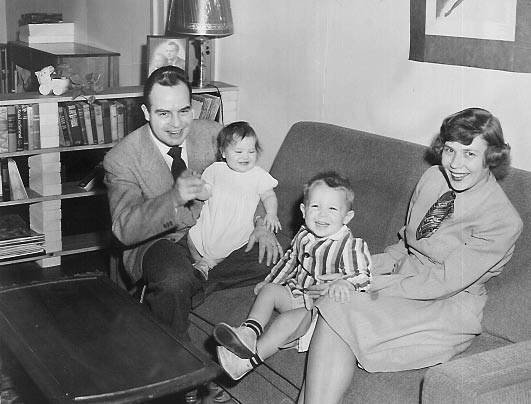 [We were in Alex (Gretch was born here), but not yet in the Heights.]

[Ditto.  I’m guessing the basement of Moen’s on Hawthorne.] 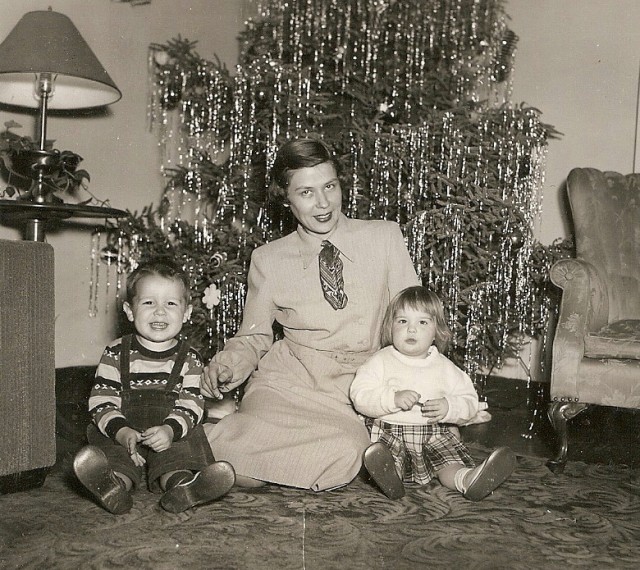 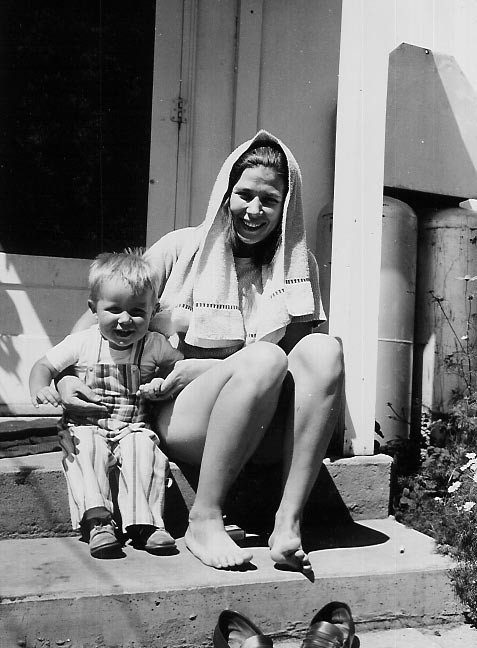 [Still just the two of us, but we’re in the Heights now.  I have no recollection of cowboy boots?]

[We still have that Santa, though some the worse for wear!] 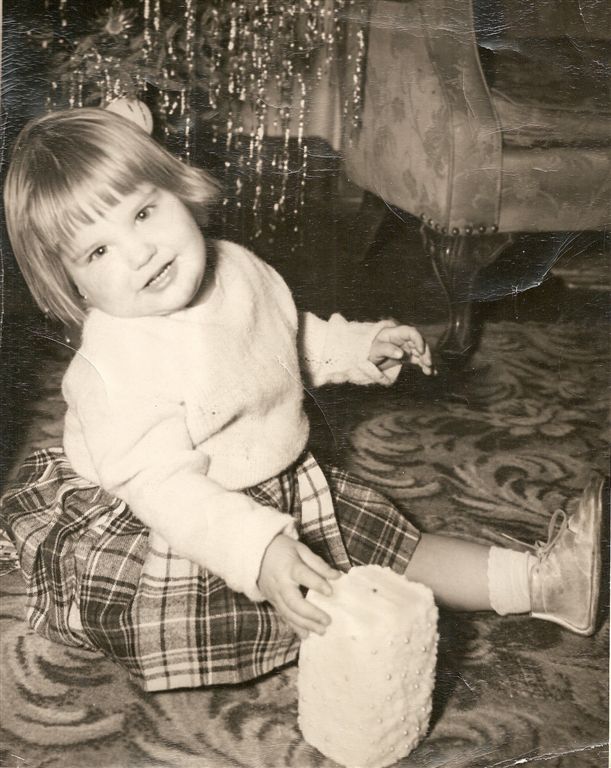 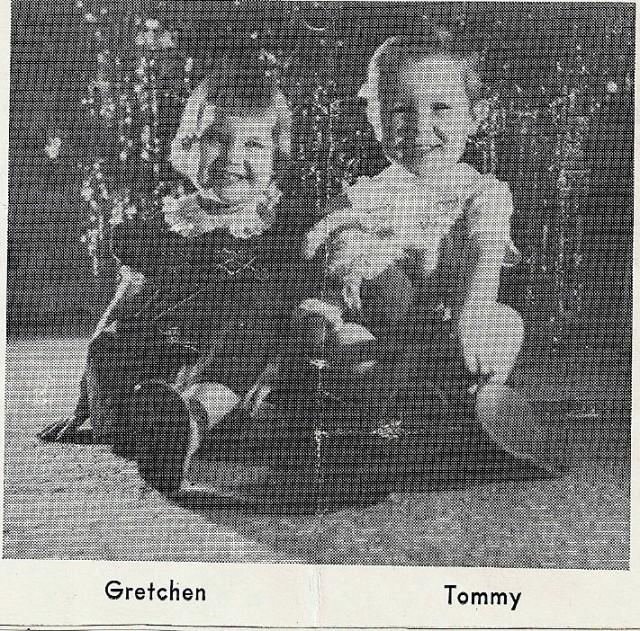 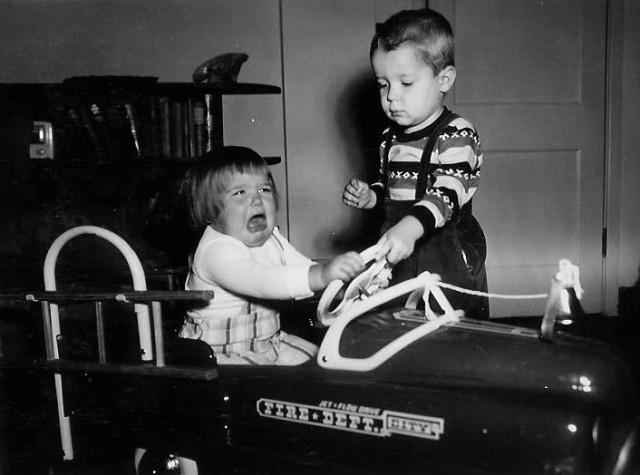 [It was always idyllic between my sister and me.  It was my firetruck and I wanted it back!]

[I won that minnow bucket from a Cowing-Robards fishing contest for my monster sunny!  That’s some bad hat, Tom!]

[Lake Victoria was notoriously not a swimming lake – so we all ran through the sprinklers to cool off in the summer.  Still has to be 1955, so I’m kinda surprised to see Brandenberg’s house was there behind us at the time.] 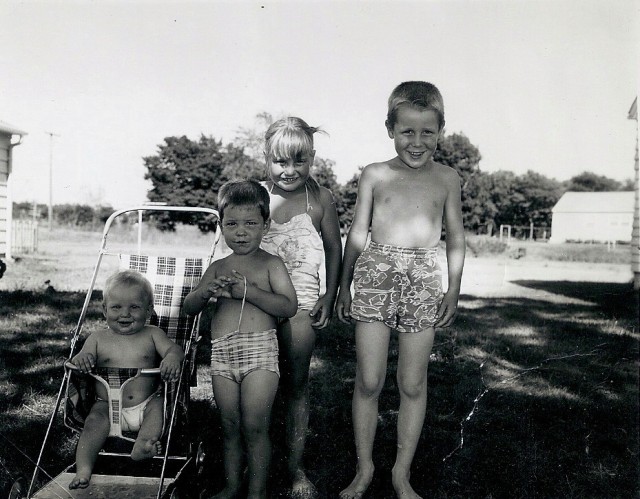 [I was an early proponent of not exposing one’s navel in public.  Of course, that gets worse as you age.] 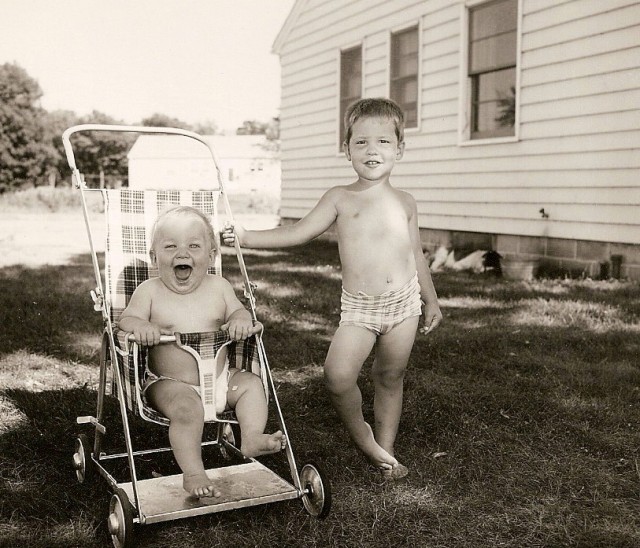 [Cam appears to have something devilish in mind.  Hide your valuables!  Chris models an early Speedo.]] 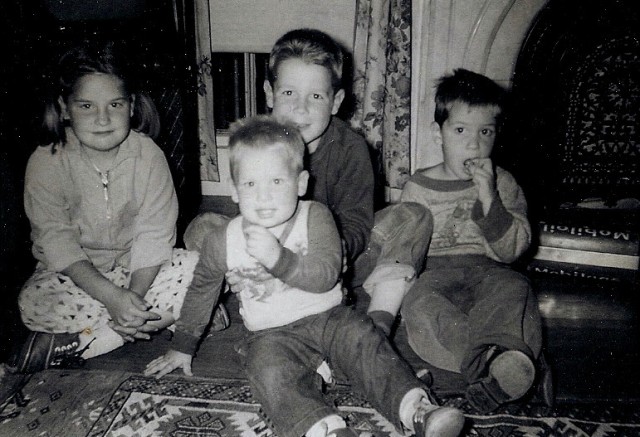 [The next year in Reading, Massachusetts.  Dad had a one-year Harvard fellowship.  We returned to Alex and the Heights the following year, 1957.] 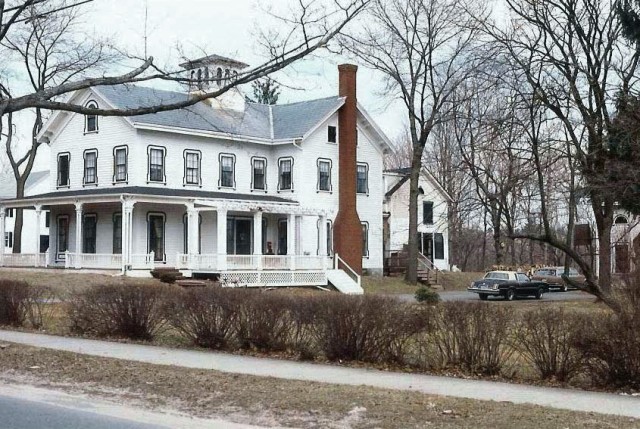 [“Our” house in Reading, taken on a return trip 30-some years later.  The residents came over and challenged me as to why I was photographing their house.  I explained I used to live there, which I guess made it OK.  We went back later and TP’ed the house!  😉 ]

[Sister Gretch, Buck, and me.  Could be a book title?  I think the going rate for a tooth in those days was a nickel.] 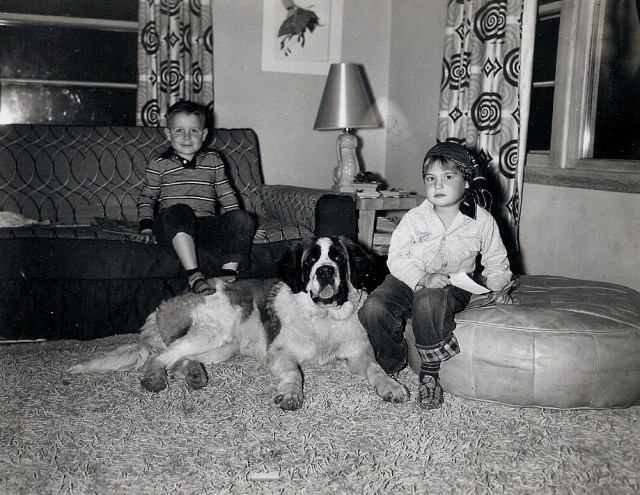 [Gretch in her gypsy phase.]

1 Response to Victoria Heights, The Early Years [* Still under construction]