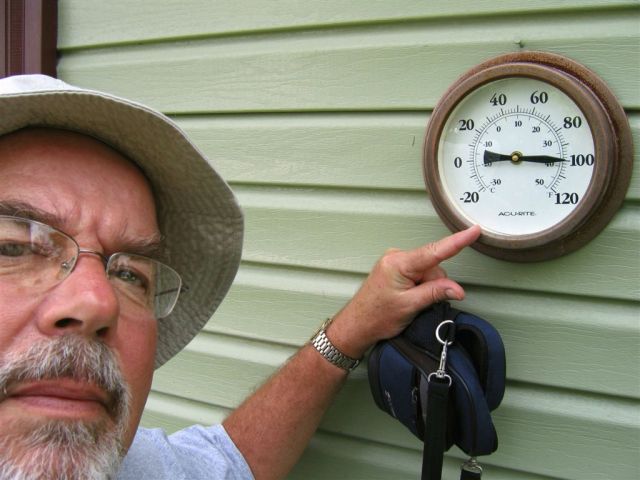 This is an unplanned column.  Because we did not plan on being home tonight.  This is Alexandria.  There is much to do, out and about, every night.  We had hoped to go to the boys’ hockey game against St. Cloud Tech tonight.  Tech is undefeated in the conference, the Cards are in 2nd place – all the makings of a great game!  Then after the game we were going to SAWA to see the “comeback” of Sami Steidl.  Sami is the viola wunderkind who went off to the University of Colorado two years ago on a music scholarship only to discover the pain in her bowing arm and wrist was rheumatoid arthritis.  That has basically put her on the injured reserve for the last couple years.  She is undergoing treatments and is currently doing well enough to play occasionally.  I hope I got all that right?

So, why are we staying home?  Because it was 40 degrees today – on January 10th, for Pete’s sake!  What little snow we had has been reduced, and melted off the roof.  By dusk, 40 had dropped to 35 . . . with freezing rain!  Cars do not do well in freezing rain – neither do people in their 60’s trying to walk in it.  This is the awful winter weather that previously annoyed the Rust Belt all the way to D.C. (where I hated it for 30 years) – but now it’s moved north with climate change.  January 10th used to mean below zero temperatures here – you can do stuff when it’s below zero, you can’t do stuff in freezing rain.  The supervisor and I love to keep an eye on the temperatures reported in Pickle Lake, Ontario – and dream of winters as they used to be. 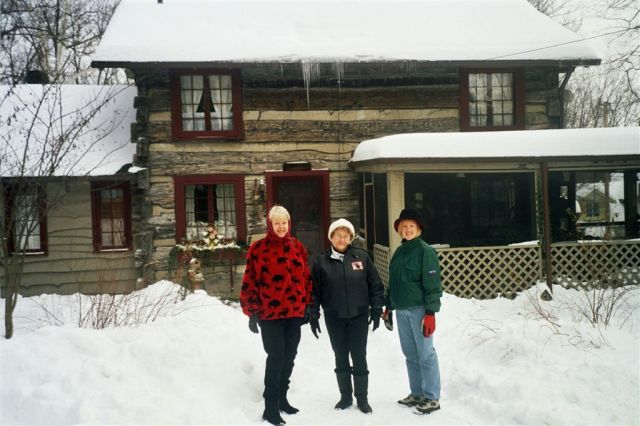 [To sate our desire for snow, not that long ago at Rita’s (of Biddy fame) home, with her daughter Beth on the right and the supervisor on the left.  Her home is in Nashville, Indiana.  That’s 60 miles south of Indianapolis.  And there was snow there – lots of it!]

[This is in Bloomington, Indiana.  Home of Indiana University, where both Rita and the supervisor, and Joshua Bell, matriculated.  This is the Subway where Jared noshed – before he went on to become national spokesman for the chain.] 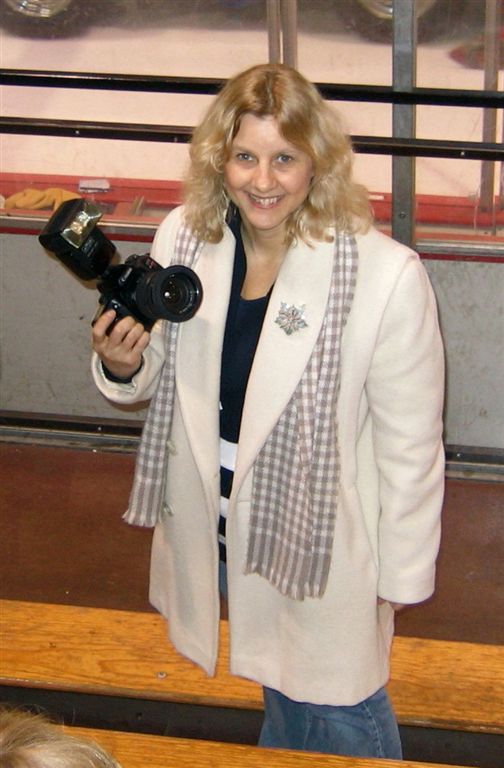 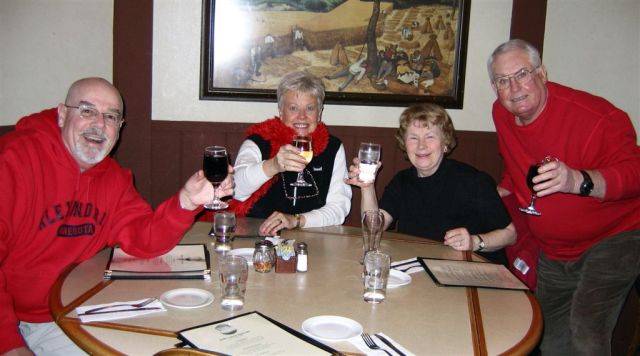 [If you have ever wondered why the Super Fans love it when our teams make a state tournament!  Also 2007 at Vescio’s in Dinkytown.  🙂 ]

[This was 2009.  I was returning to the scene of what I generally consider to be my all-time favorite meal.  Now who doesn’t have a favorite meal?  😉  This is downtown Portland, Oregon.  The restaurant in the background is Jake’s.  Several years before Basketball Dan and I were on one of our famous tour the country adventures, and we stopped at Jake’s for dinner.  I had a three salmon entree’ – a white salmon, a pink salmon, and a red salmon.  It was . . . spectacular.  Mmmmmm.] 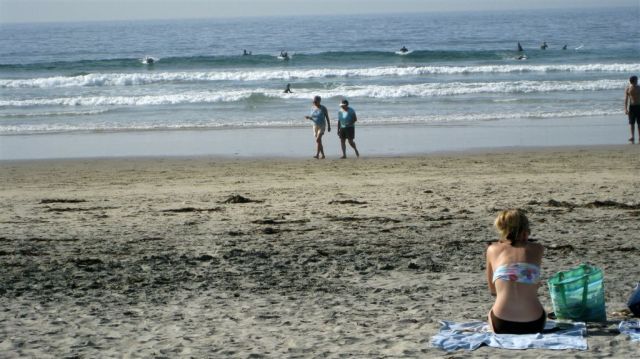 [The Biddies walk the beach in San Diego, still the 2009 trip.  We were there visiting Rita’s aforementioned daughter, Beth, and her husband, Chris, a/k/a, our niece and nephew.  The woman in the right foreground was there merely to provide perspective.] 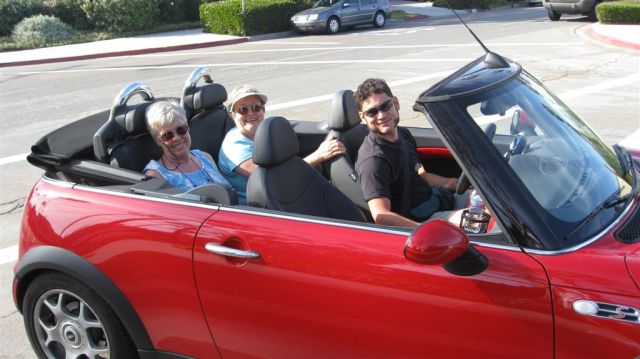 [Chris drove us around San Diego in his Mini-Cooper convertible.  The Biddies liked it!]

[To be honest, I think we were looking for the nude beach.  It would have been a good place for one, because it was death defying to get down there!  😉 ] 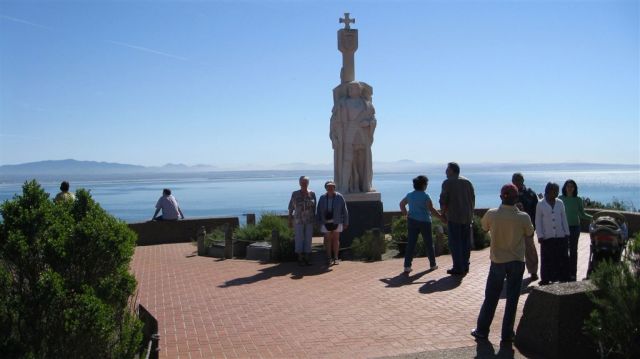 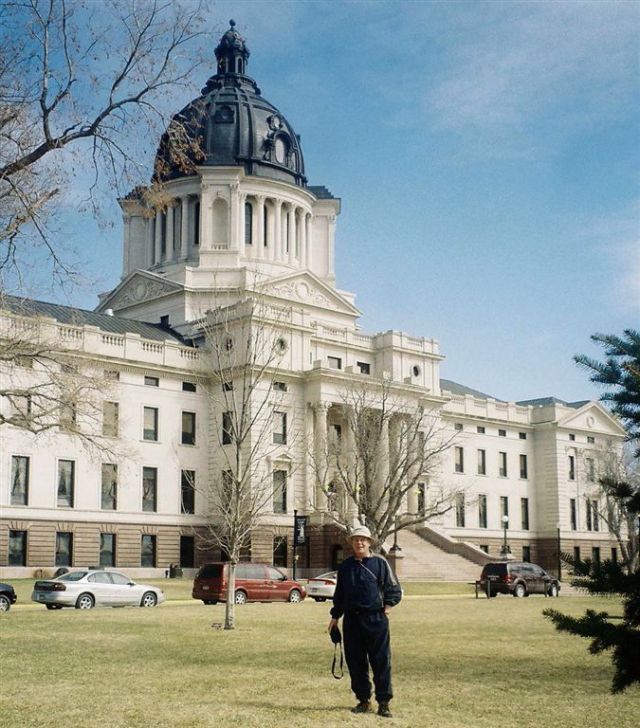 [I was able to overcome objections from the supervisor in 2004, but I was determined to be one of the 42 people in the United States who could say they visited the capitol of South Dakota!]

[I think it’s famous!  Apparently you had to shave before you could enter.] 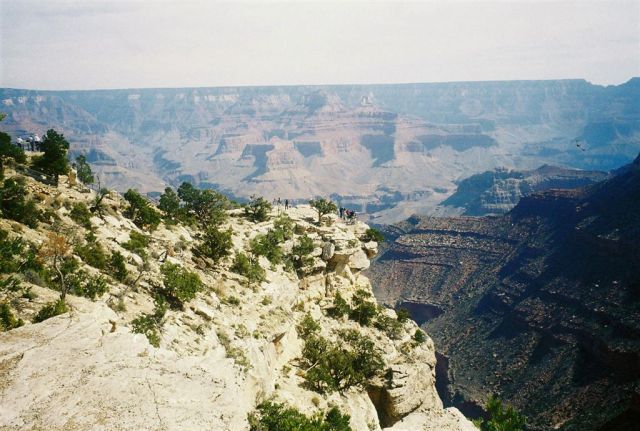 [If I may be so bold, a must to be at the top of anyone’s Bucket List!  This was my 2nd trip there.  The first time, in the 80’s, I remember just driving along and all of a sudden it just appeared.  That first ever sighting takes your breath away!]

[Condors in the Canyon.  It is indeed Grand.] 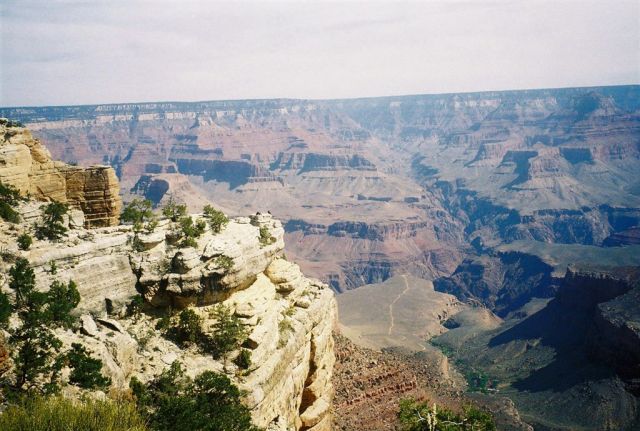 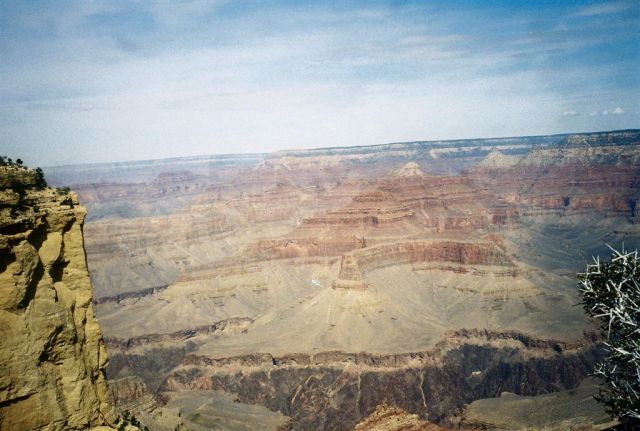 [A great place to just sit and contemplate your navel.]

[The supervisor is not exactly “looking over” the railing.] 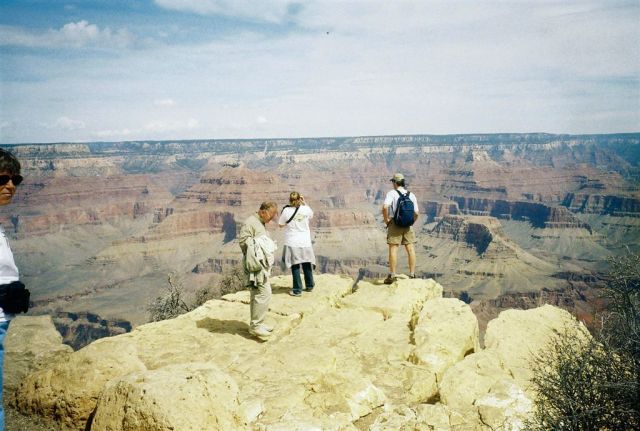 [As I recall, I did not even venture out onto that precipice.  Are you people nuts?]

[The Biddies in Death Valley.  I have to admit to never being in a hurry to visit here – one of my last on the Western natural wonders list.  I was wrong.  The place is incredible . . . and I have to go back.  A reminder to always have back-up camera batteries.  On our 2nd day, before we left our lodging, I noticed my camera batteries needed re-charging.  We couldn’t wait – we would just use Rita’s camera for the day.  We went back up into the side canyons, and I know I got some marvelous photos.  Then the next day we lost Rita’s camera.  😦  Now I have to go back and re-create those shots!]

More stuff tomorrow.  It appears freezing rain will be afflicting us then again.