Hey, how ’bout our Cardinal football team??  Our young men of the gridiron were in a rebuilding year – only one win, and that thankfully on homecoming.  They opened the playoffs with a 39-12 pounding of St. Cloud Tech.  As I recall Tech beat us by a similar score on the first game of the season?   Next up, at Moorhead – we played them close the first time.

Our girls soccer tournament is playing Blake in the state tournament tonight (Thursday).  No doubt we’ll now that score before we finish this posting.   [It’s now the next day (funny how that happens) so we have a report:

Blake 2, Alexandria 0: Lydia Sutton’s 12th and 13th goals of the season led Blake to a 2-0 victory over Alexandria in the first round of Class 1A state tournament at Roseville High School.

The Blake School is the defending state champion (never play anybody named “The Something School”).  The Cardinals’ coach said they were the best team he has ever seen in 14 years of coaching.  Which once again begs the question, for the sake of competitive integrity, why aren’t private schools in their own class?  Nevertheless, we congratulate our Cards for a great season and making it to state!!  🙂

We also learned that the Hasz sisters, Megan and Bethany, finished 1 – 2 in the cross-country section final meet in Bemidji yesterday – they were just .3 second apart and beat the No. 2-ranked runner in the state, Bemidji’s Jenna Truedson.  Alex finished 4th (of 16)as a team, but the Hasz sisters will go to state as individuals.  The boys team finished 7th (of 16) but lost a key runner to injury during the race.  Congratulations to all the Cards!]

[WE WON!  In the sport I’ve chosen to cover this fall, the volleyball team began section playoffs on Wednesday with an impressive 3-game throttling of Detroit Lakes.  This is the post-game celebration.  Some time soon they travel to Bemidji for a re-match with the big, bad Lumberjacks.]

But, speaking of writers, we’re going to take a brief interlude for a visit with Mr. Maintenance.  You may recall the above book from an earlier posting.  It’s a very fun read, even for someone with two left thumbs.  I’m sure many of the male readers in the audience will agree that a husband, as we all ultimately learn, should be a handyman, a lawn guy, and someone who regularly takes out the garbage.  I satisfy number 3.  Nevertheless, we still find such as the following amazing and think, gee, I wish I had the handyman gene.  From the book, Chapter Six:

This is the most complicated thing I ever built (Tom Hartwig, who is the Tom of Visiting Tom), he says, hands on his hips as he stares at the sawmill.  Took me two years.  Two winters.  We went out and looked at about twelve sawsmills before we built this one.  There’s over a hunnerd pounds’a welding rods in that thing.

The sawmill is mounted on a set of old truck wheels and balanced by seven screw jacks distributed fore and aft.  From tongue to tail it is forty-five feet long.  A gangly boom projects out at a right angle and terminates over a pile of sawdust that has been swept there by the paddles on a droopy chain. . . .

Fella had some sawmill parts that had been lying in his iron pile for forty years and I gave him seventy-five dollars for those.  That included the arbor and the wheels.  All the rest I built.  He lifts away a hinged piece of sheet metal to reveal the guts of the mill, and now he’s describing the minutiae, how he set up the clutching mechanism with sheets of Masonite and two truck tires that roll against each other, how he built the keyed hubs on his lathe, how the roller chain setup is intended to counter the negative effects of torque, how the push stick he uses to run the log carriage back and forth is hooked by means of an iron wheel to a setup that engages a Chevrolet transmission hooked to the rear end of a Ford Pinto, which in turn rotates a cable drum that pulls the log into the saw or runs it back when you throw the stick the other direction . . . You’re trying to follow but all you see is a maze of shafts and bolts and roller chains and grease-caked bearings and flanges.  In Tom’s head, it’s all laid out real clear.

And that’s how you cut lumber.  I don’t understand it – but I love it.  And really admire people who can do this stuff!  🙂 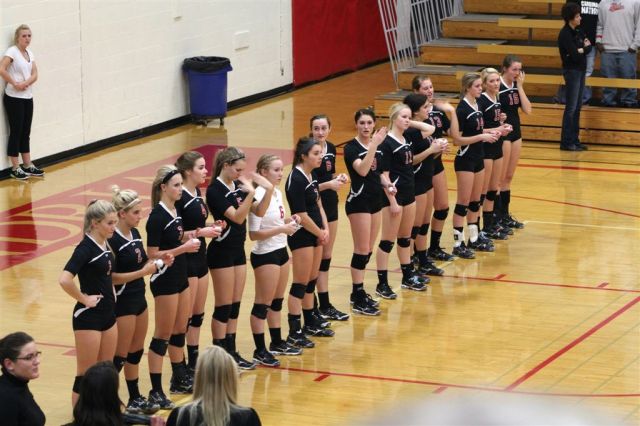 [Meanwhile, back at the JHS gym – team introductions and the National Anthem.  This is also an opportunity to re-introduce the blue garbage can, which had a co-starring role in most of last year’s postings.]

[I wasn’t quite sure who I had here in the VIP section until I got it home on a big screen.  We have Sarah “Baby Bruiser” Bruzek, No. 13, star goalie on the soccer team . . .]

[And Karly Betterman, No. 5, of the cross-country team.  They will be teammates on the basketball team.]

[“Baby Bruiser” is “Baby Bruiser” because . . . of this photo.  Taken by moi on February 24 2006 at the Xcel Energy Center.  Her oldest sister, Brittney, a/k/a, “The Bruiser,” was a forward on our state tournament hockey team that year.  Plus, her dad, Bud, was my high school classmate.  And now Sarah has played on a state tournament team herself.  🙂 ]

[This was the last home game of the year.  Thus, instead of usual pickled vegetable toss, the players threw stuff they found in the back of their lockers – DQ debris was reported among the objects.  Oh, No. 11 again is sophomore Amanda Haack.] 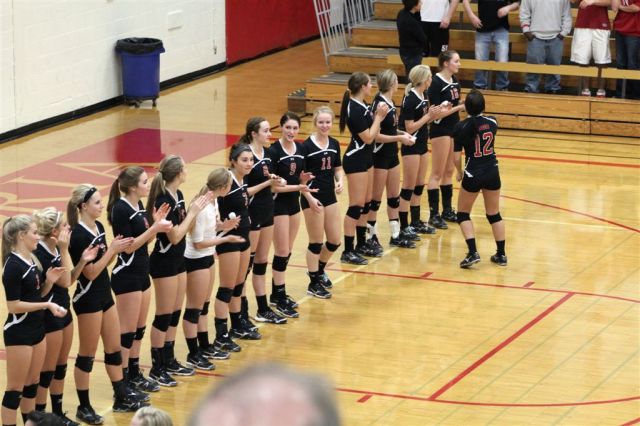 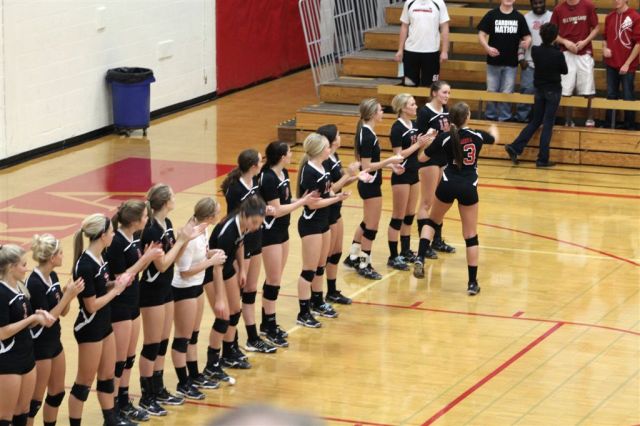 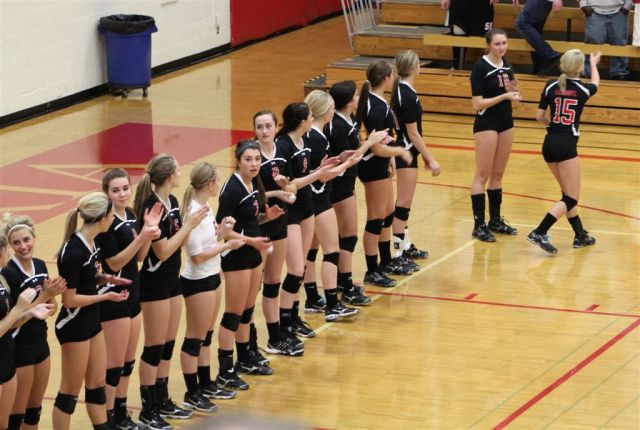 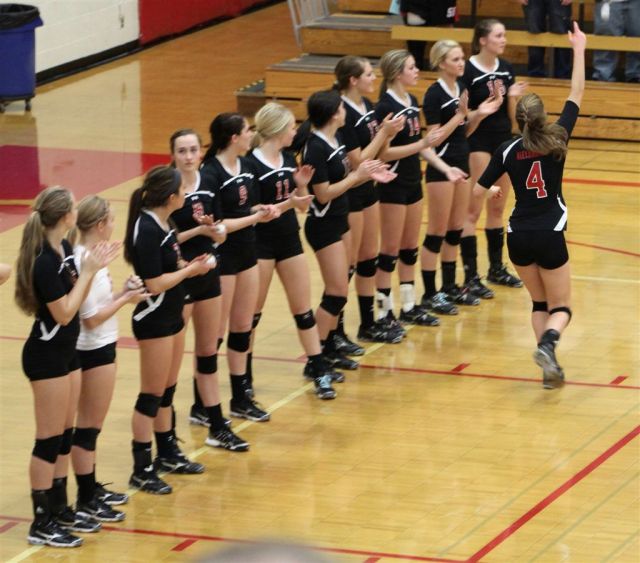 [Junior Amanda Christianson, who throws a basketball the length of the court, hit the top row.] 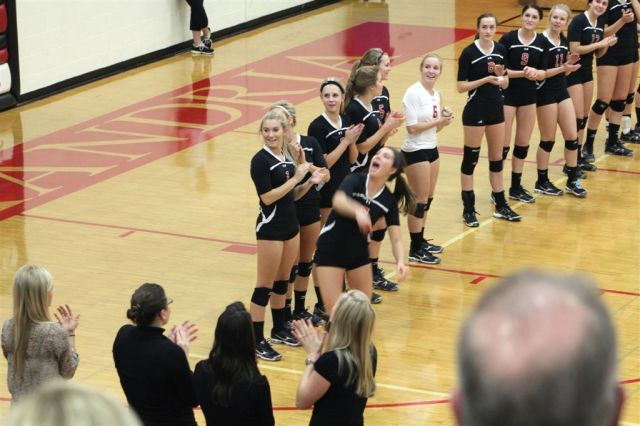 [Senior Natalie Watkins decides to go near side, thus stifling the defense.]

[As does senior Tara LeBrassuer.]

[Then goes far side.  Was that a hockey puck?]

[Lakers, as you may recall from your studies, refers to a body of water larger than a pond but smaller than a DQ quarter-tonner.]

[Do sa do and Allemande left!]

[Adrianne and Amanda C stuff it like it was a Thanksgiving turkey!]

[The Cards jumped out to a big early lead.  It was obvious it was going to be a long (and thus, short) night for the Lakers.]

[The Cards were hitting on all cylinders – if birds can be said to have cylinders?] 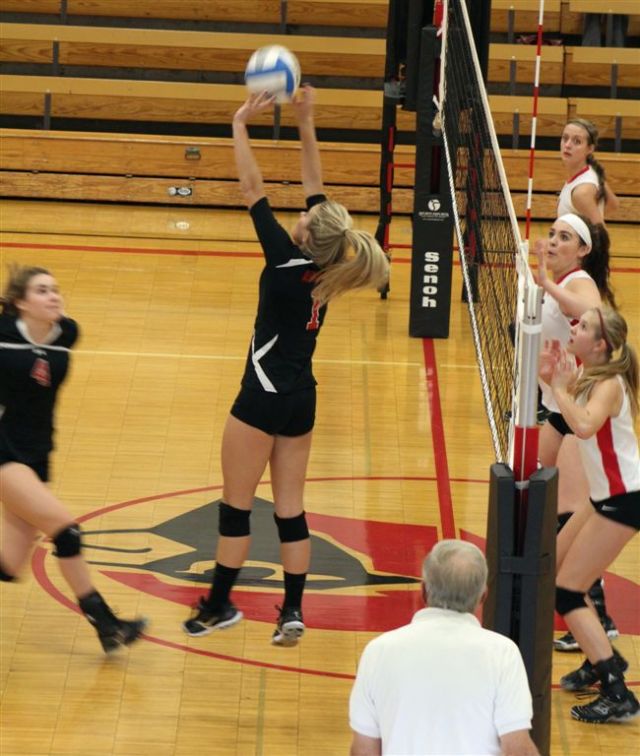 [The Lakers are thinking, Oh, no!]

[A group rejoice (my favorite play) is indicative of a won point.]

[A group rejoice is also where apres game festivities are discussed.]

[Allie demonstrates to Amanda C the proper procedures for de-lidding a Blizzard.] 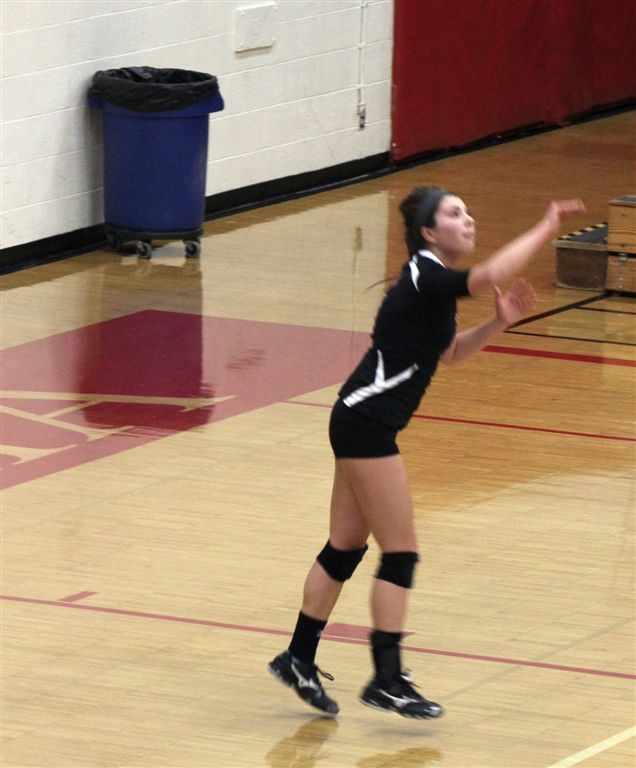 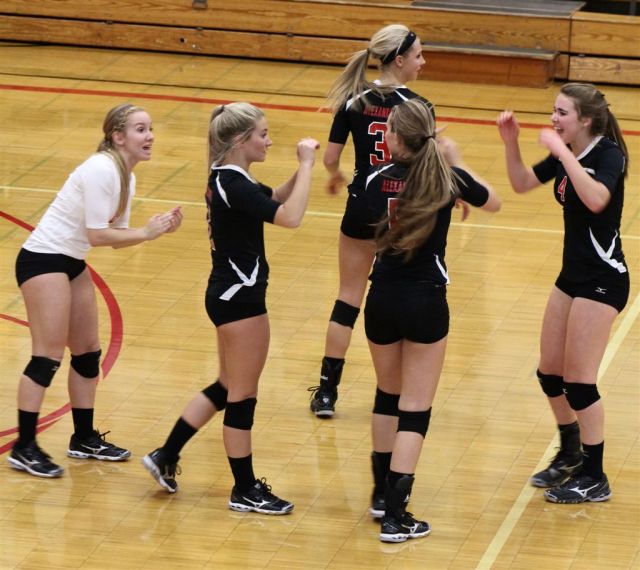 [We won a lot of points when Natalie served.]

[Now remember, de-lidding is all in the wrists.]

[The student section is abuzz with excitement!  Shanee’ advised them DQ coupons may be available at area kiosks!]

[Allie and Amanda C stare into the Laker backfield – trying to steal signs?] 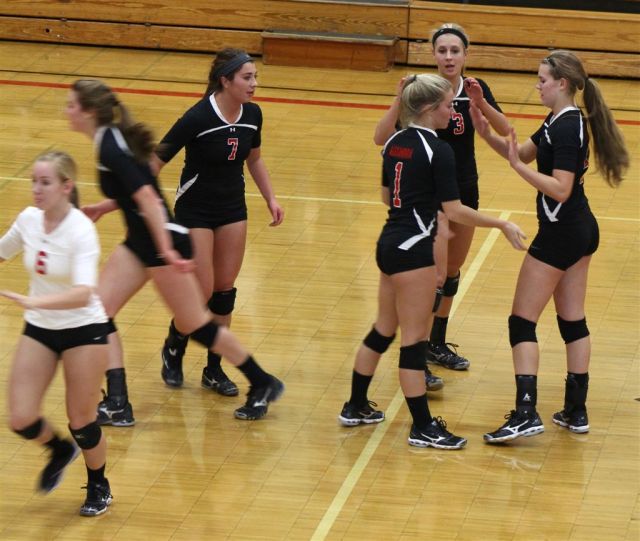 [“The Voice of the Cardinals” hurriedly addresses his stat line as the Cards score again.  He was obviously kept busy in the game – his ever present Coke looks untouched.] 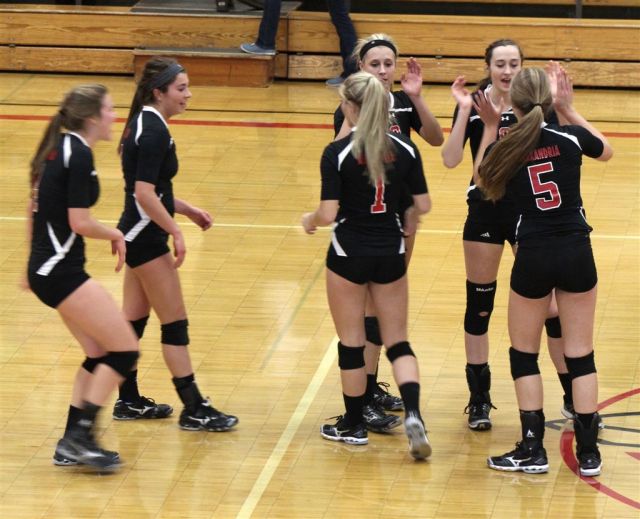 [Have I double high-fived you yet?] 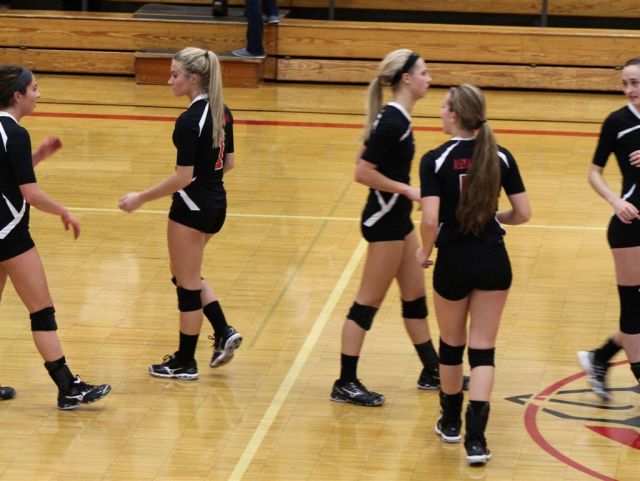 [I heard the Blizzard-of-the-week was the double jamoca almond fudge with Skittles! ] 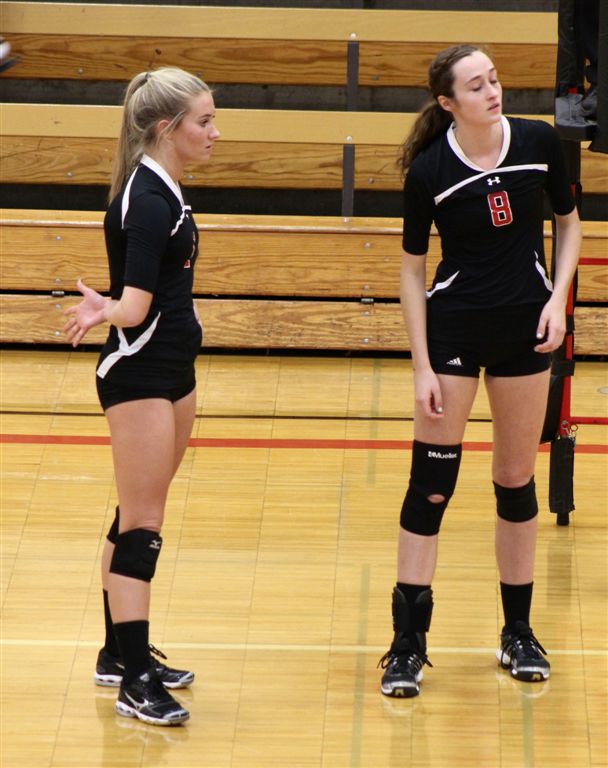 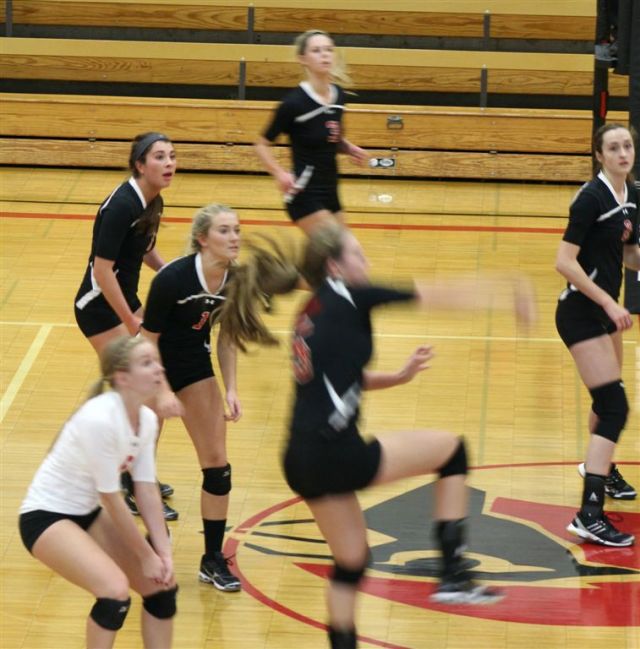 [And Amanda C slams it over.]

[Then goes up for a block with Tara.] 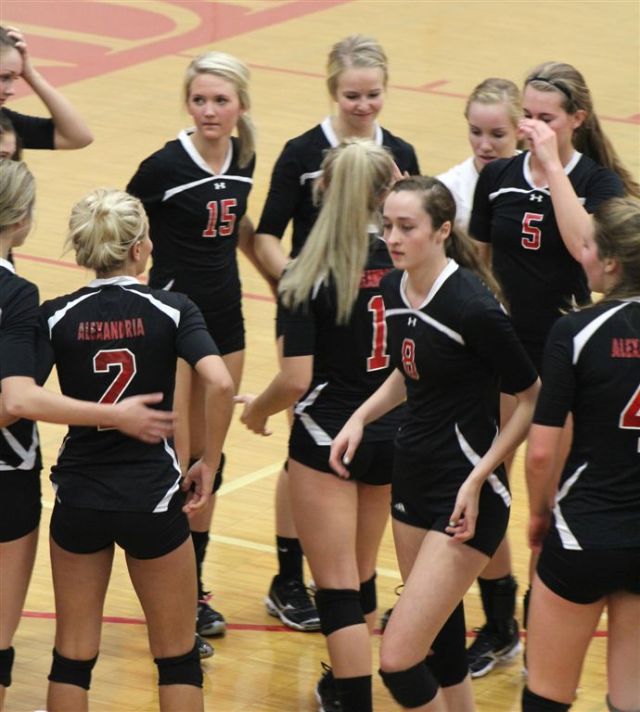 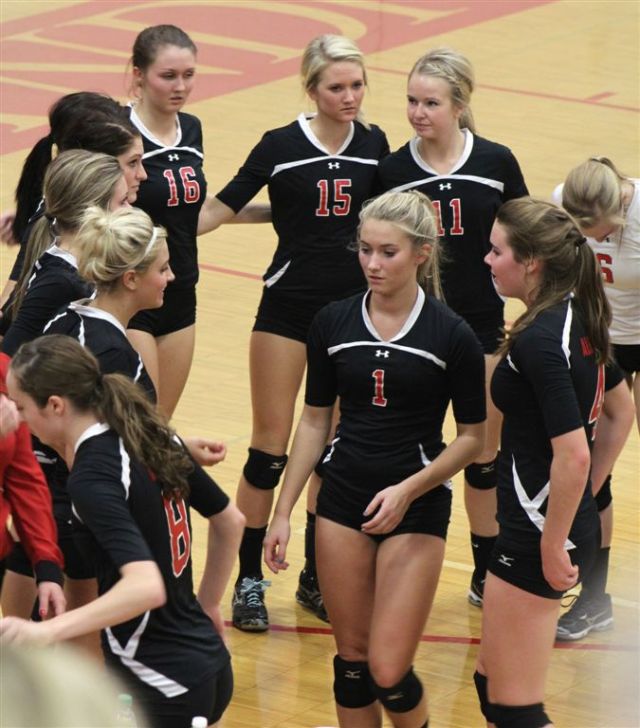 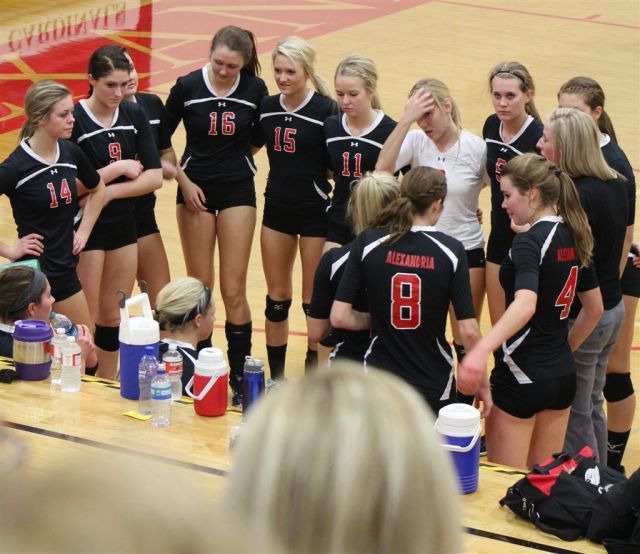 [Hydrate!  If you’re doing Blizzards later, you must hydrate!] 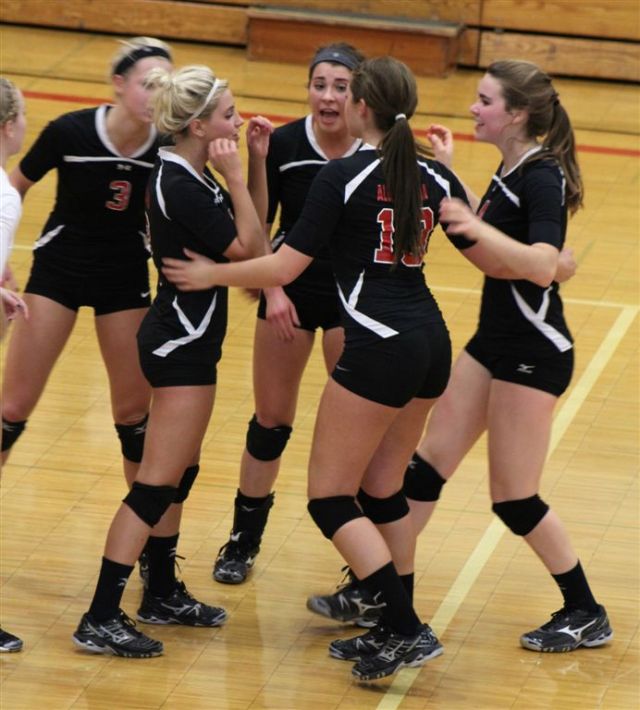 [The photographer is so excited he takes a blurry photo of a still object!] 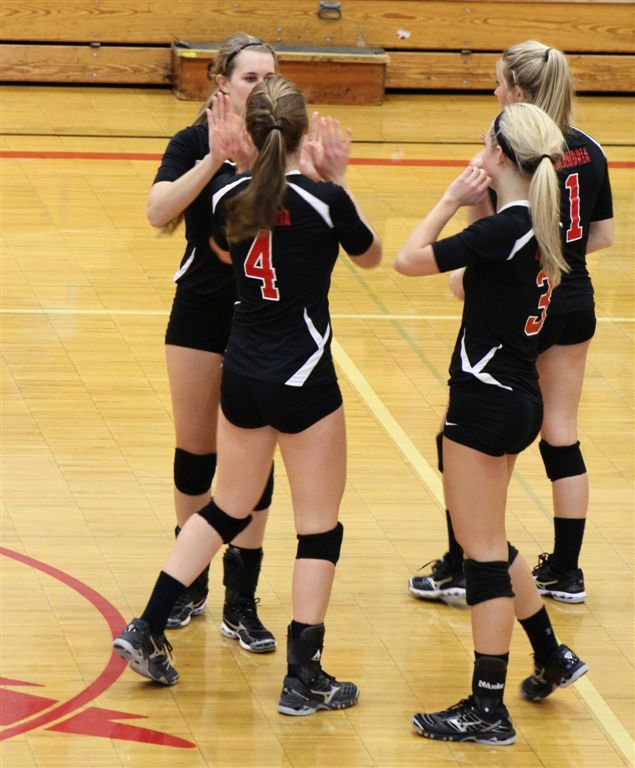 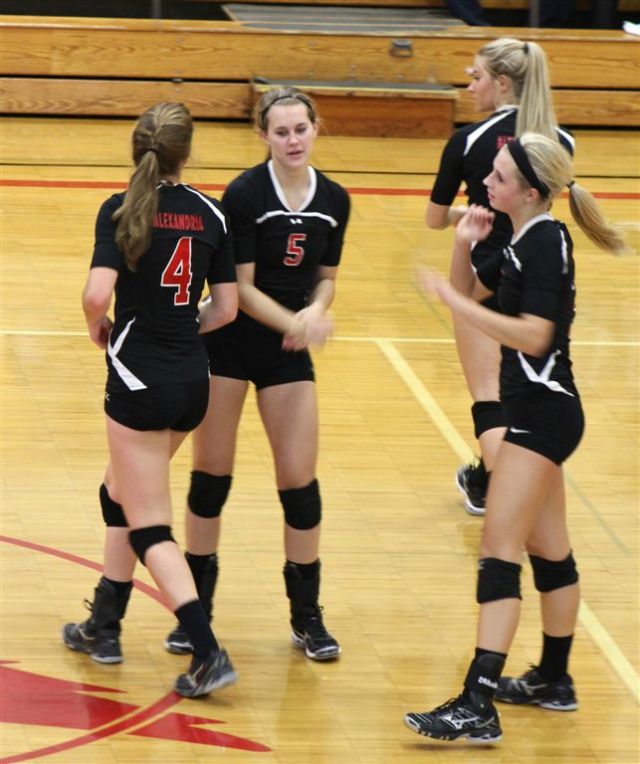 [After a crushing kill!  (Though no harm intended.)]

[Is that really the new Blizzard menu?] 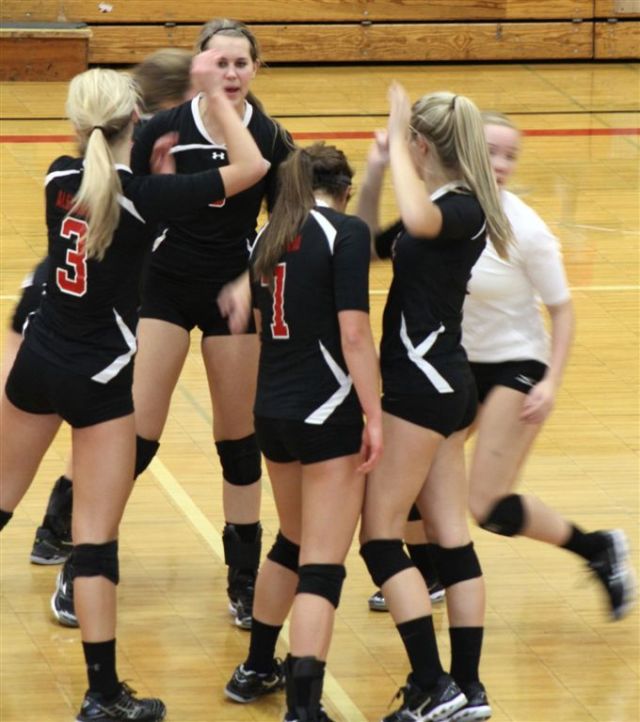 [Jenni, Tara, and Emily man the net.  Has it ever been determined whether “man” is the correct verb in these circumstances?] 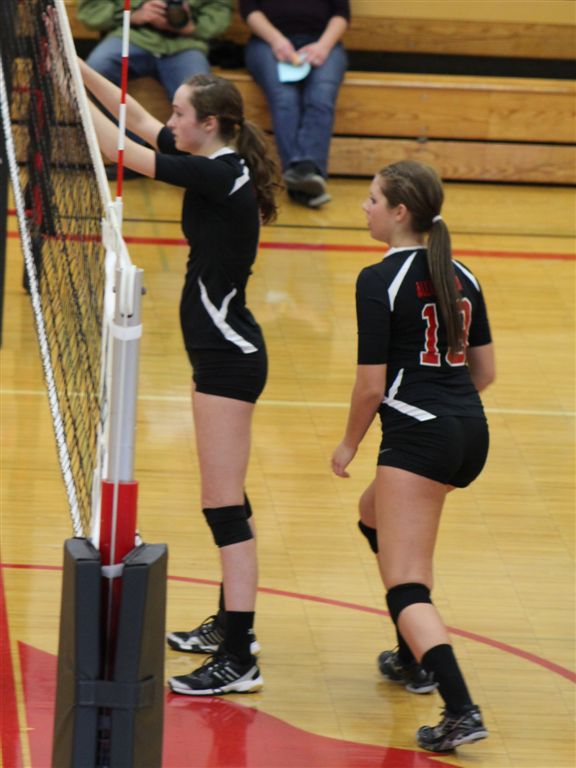 [Emily does a sweep right around Tara.] 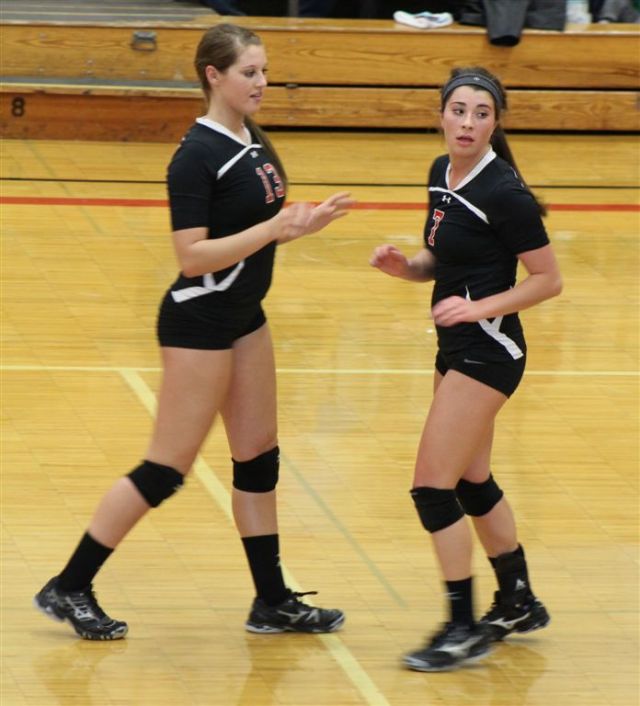 [I’m not really sure what Emily’s intentions are here, but Natalie seems oblivious to them.]

[Emily, Adrianne, and Natalie at the net.  I think we’ve now presented every combination of frontliners we use.  I continue to not understand rotation patterns.] 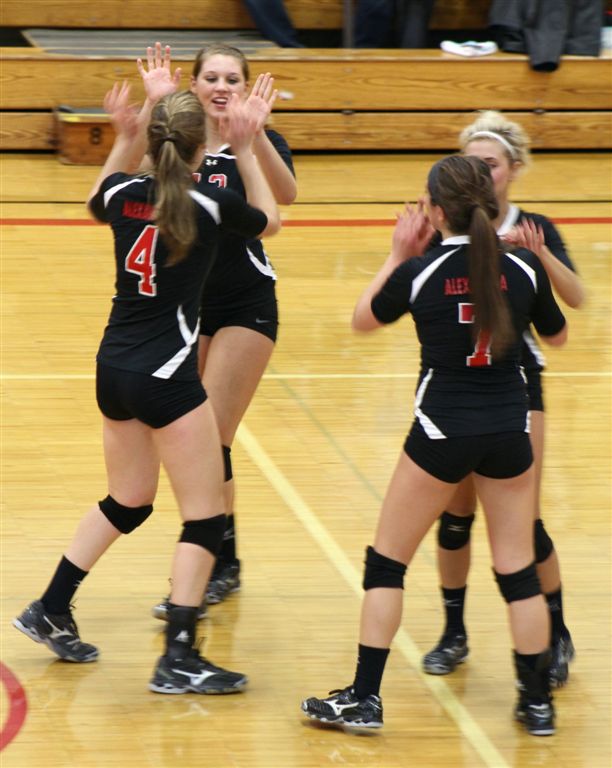 [The backline never gets enough coverage.  It’s harder.  You always know there’ll be activity at the net, so there’s a major tendency to aim the camera there.] 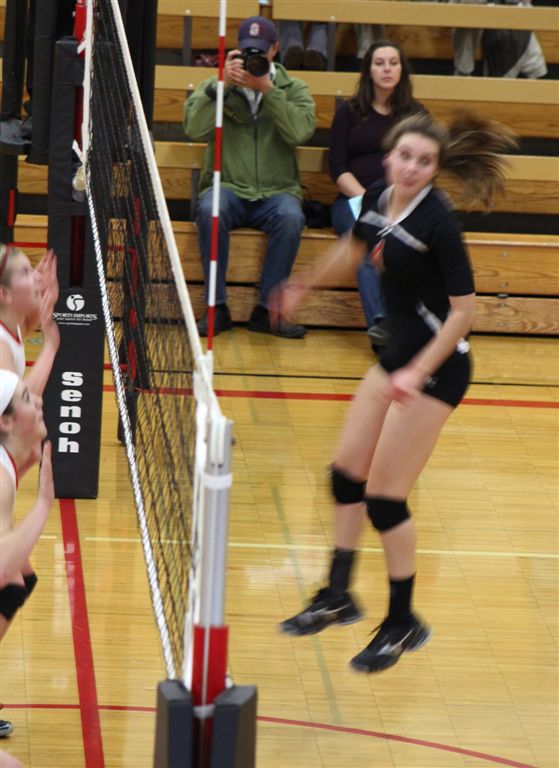 [I wonder if the guy on other side got a better photo?]

Due to extraordinary length, to be continued . . .