Saturday marked the 40th anniversary of Title IX.  Absent Title IX, this blog would not exist, and the supervisor and I would be living in a high-rise condominium in downtown Minneapolis.  Thank you, President Nixon!

Taj McWilliams-Franklin, center for the world champion Minnesota Lynx, on Title IX as reported in the June 23, 2012, edition of The Minneapolis StarTribune:  On 6-on-6 girls’ basketball in high school ” . . . couldn’t go past half-court because they didn’t think women had the constitition to play full-court.  So you only had three [players] on offense at one time or three on defense.  You couldn’t do both.  And I thought, ‘Wow,’ that was the beginning of of understanding that women have the same heart and lungs that men have, and the move toward equality.  And Title IX was about that.”

I have just returned from a weekend hockey tournament where our high school girls played FOUR full games in TWO days.  I was exhausted just watching four games in two days.  But, hey, at one time they didn’t have the constitution to play full-court basketball!

And hockey in Minnesota produces a certain gathering of spirits, a festival of friends.  So, allow me to introduce Carrie Newcomer here:

The Gathering Of Spirits

Chorus: Let it go my love my truest,
Let it sail on silver wings
Life’s a twinkling that’s for certain,
But it’s such a fine thing
There’s a gathering of spirits
There’s a festival of friends
And we’ll take up where we left off
When we all meet again.

And here Ms. Newcomer, one of our favorites, sings it:

OK, I get kinda schmaltzy when it comes to girls hockey!  🙂 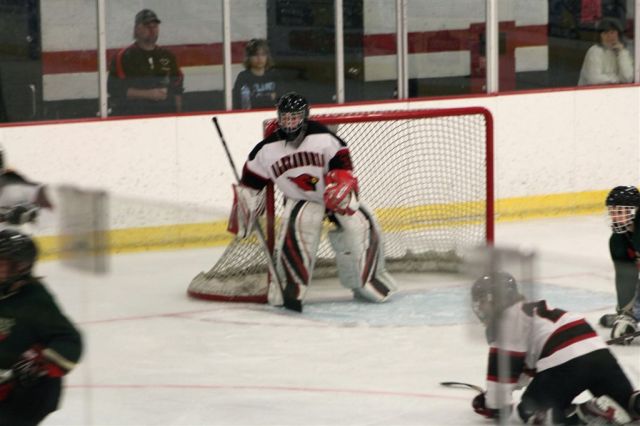 [Bailey Serum, goalie, will be a sophomore.  Unless I miss my guess, that’s Shanee’s mom viewing on the far right.  🙂 ]]

It was a weekend long tournament – with 6 teams.  Our coach was out of town, so Shelby’s dad, Becca’s dad, and Shanee’s dad coached.  Their daughters were among the few from the varsity team that played – it’s summer, and kids are off on family vacations, softball tournaments, hockey camps, et al.  So, it wasn’t so much a competitive thing (yea, meaning we tied one and lost three close games), but it gave us an opportunity to give playing time to kids coming up from the U-14 team.  And there are some talented players.  We have no idea if the other teams had their full complement of players – but since they were coming to Alex, and our players were leaving Alex, well . . .

Which, of course, brings us to Patchouli.  I was getting a tad ahead of myself here, but the weekend began on Friday afternoon at the winery.  The supervisor stayed home – we both have been battling injury and illness commensurate with our ages – but Patchouli only comes around 3 – 4 times a year, so I had to at least see (and hear) a bit of them. 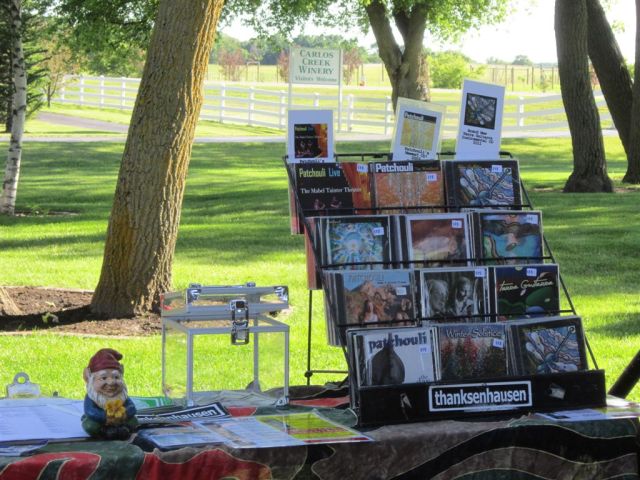 [At least it was a perfect day.]

[And the sky shots interspersed throughout are from the previous week over beautiful Lake Darling.]

[Oh yeah, the hockey.  When the ladies came out for the 1st game, we (Super Fan Bob “Weakie” Annen joined me for both Saturday games) were having a heckuva time identifying the players.  First, it had been a while since we’d seen them play, but I still (?) remembered a lot of the numbers – but they weren’t matching up.  And it’s hard to see faces through their helmets as they’re moving around the ice.  Then Shelby’s and Becca’s moms (Missy Iverson and Sara Illies, respectively) showed up.   We asked, “Where are your daughters?”  They said. “They’re out there.”  It seems the players grabbed jerseys at random (and there are no programs for events like this).  So, we spent most of each game trying to learn the players by skating styles and color, length, and design of ponytails.  In this case, I have no idea who is standing in front of Bailey.] 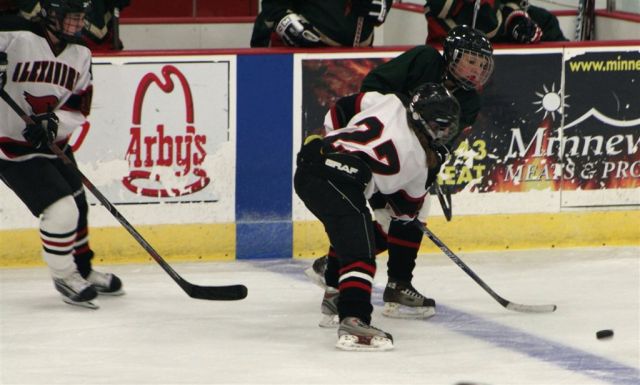 [Sara Schmidt (27) somehow managed to retain last year’s number.  She will be a  senior.] 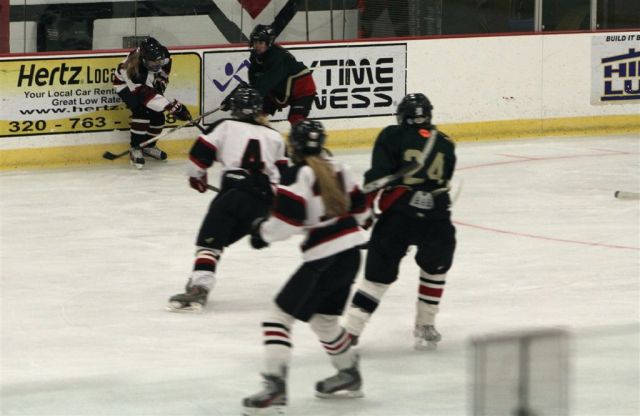 [Shelby is No. 4, but that still looks like Sara on the left so they’re probably in the middle of a line change.  Thus, I have no idea who is on the right whose number is partially obscured by more hair than I have seen on my head in a lifetime.] 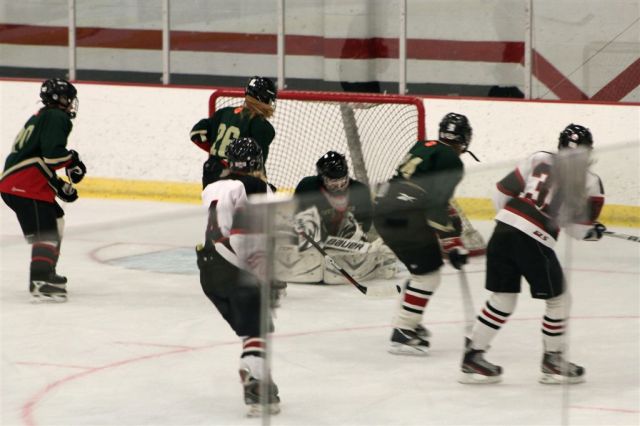 [Cards get a shot on goal (by Becca?).  Against River Lakes, a conference rival.] 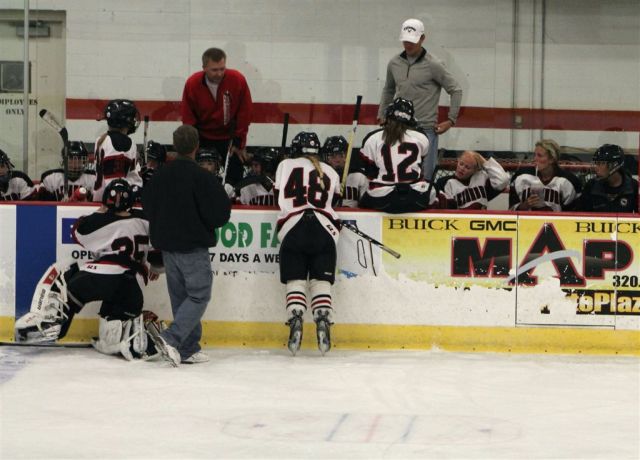 [OK, here’s the plan!  Coaches for the weekend were hockey dads:  John Herd (on ice), Tim Iverson (on the left), and Marc Illies (on the right).] 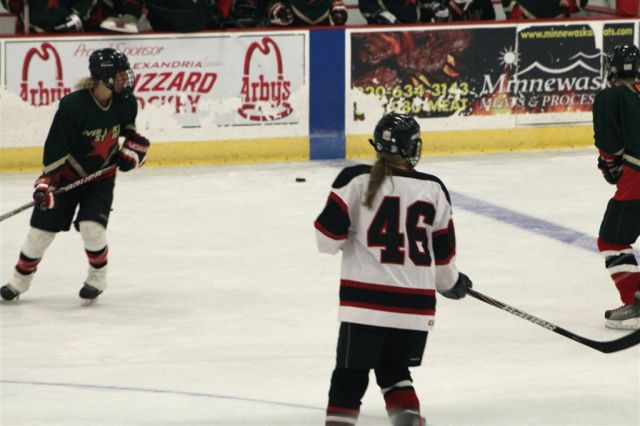 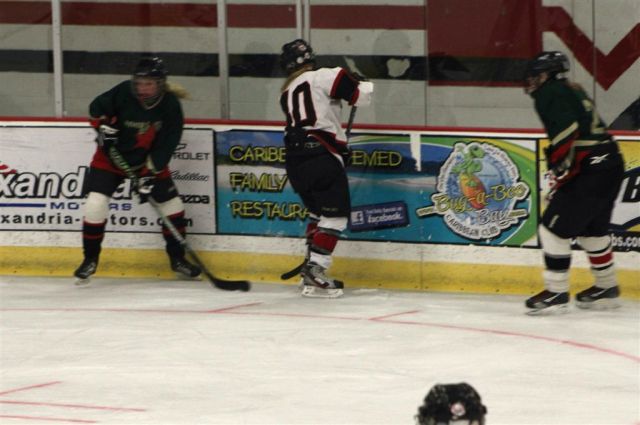 [Shelby looking for an opening.]

[Right above No. 18 for the Stars is recently graduated Quinn Kragenbring, looking for all the world like she would love to be out there.] 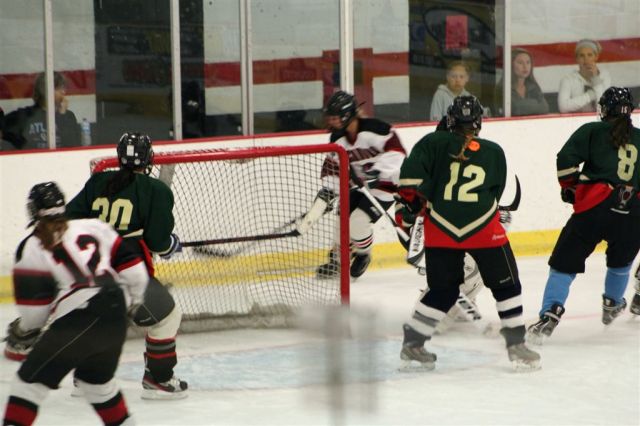 [. . . then a scramble around the net.  If I remember, No. 12 is Madi Houska (senior to be) – well, at least she was last year.  Madi was nursing an injury and did not play in the final game, reducing even further the number of veterans.]

[The competition!  The photographer for River Lakes, as far as I could tell.]

[That’s Shelby in the penalty box.  In fact, she got a penalty in every game!  That’s not her style.  I told her Mom, No dinner for Shelby!]

[This was our first goal – scored by one of the kids, I think they said her name was Revering.  She is not in the photo – it was a good shot from out front.  She appears to be a very talented player; however, on this weekend, game one was the only one she played.  As soon as the game ended, she joined her family for a trip to Alaska.]

[Coupla close-ups of Shelby.  She slipped me a fiver to feature her in this game.  😉 ] 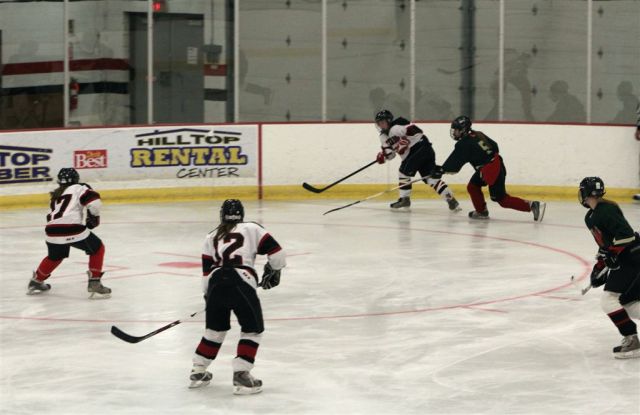 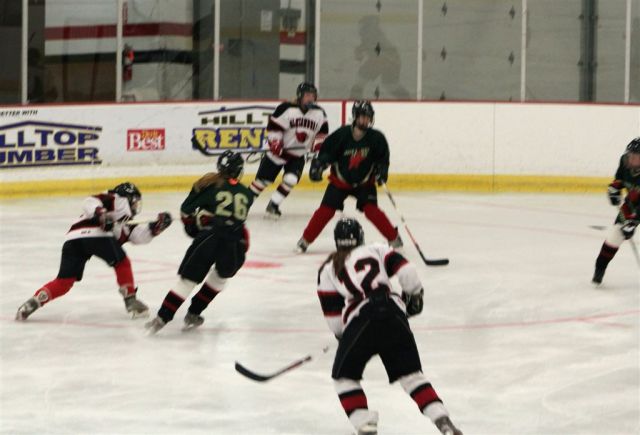 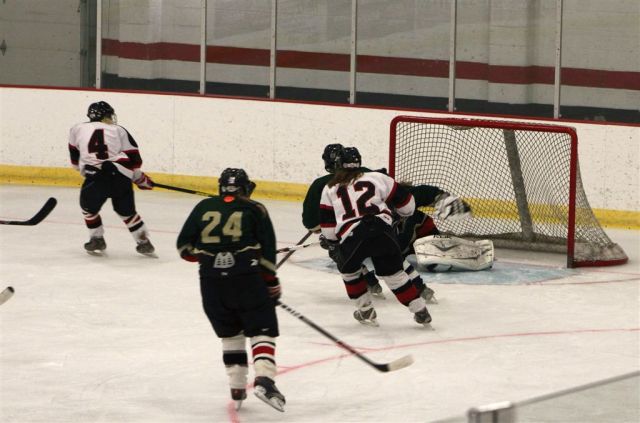 [Then with 1:24 left in the game, Shelby scored on a backhand on a breakaway to tie the game.]

[The ref points that the puck was in the net.  You’ll note that Madi (12) was “right there” when the goal was scored.  She was also “right there” on the 1st goal.  Maybe we should station her next to the net?]

[We actually had a couple of good scoring chances as the clock ran down, but 2-2 was the final.]

[Between games, a quick jaunt to the winery, still sans supervisor, for an hour and a half of frivolity with Skilly & Duff (& Annie).]

[And then it was back to the RCC for the game against the Renegades, who we eventually learned were from the Chisago Lakes area.]

[Cards force a Renegade save.  Don’t recall our numbers here?] 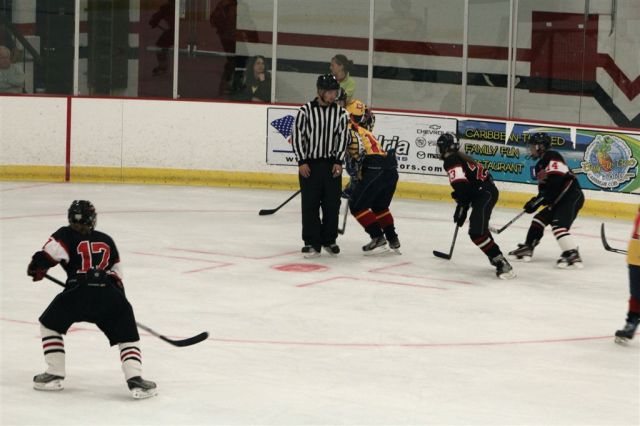 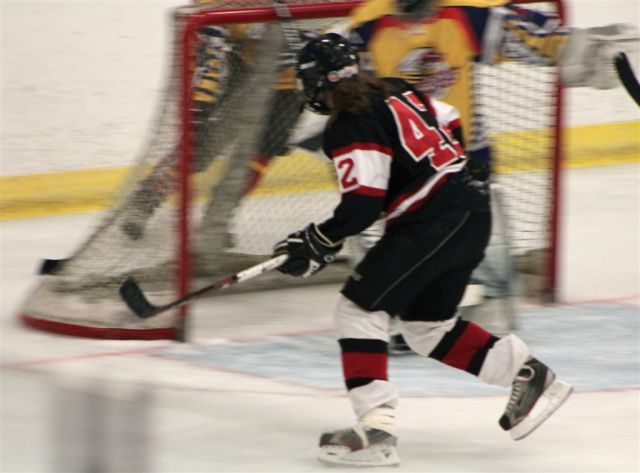 [This, and the next two, of Madi – though this is my favorite.] 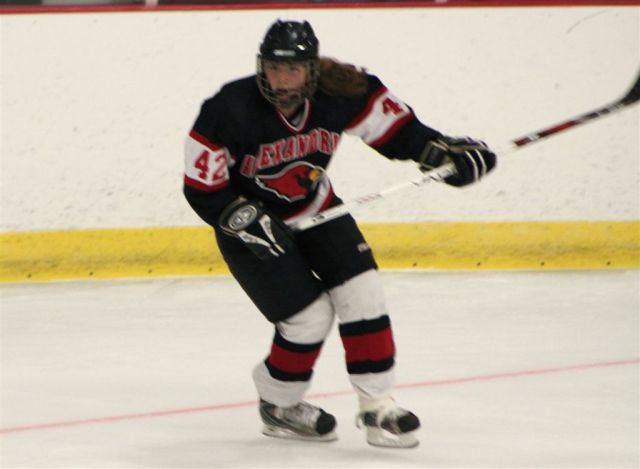 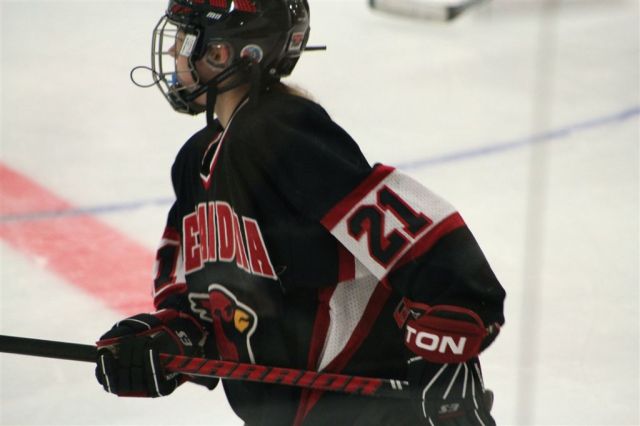 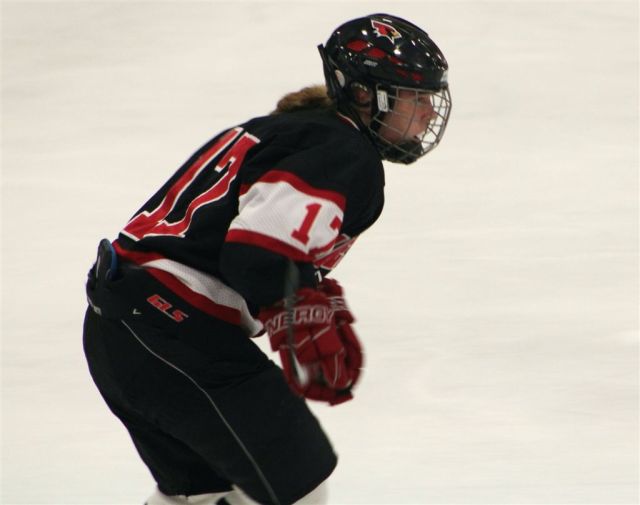 [A couple of Ms. Serum defending the fort.] 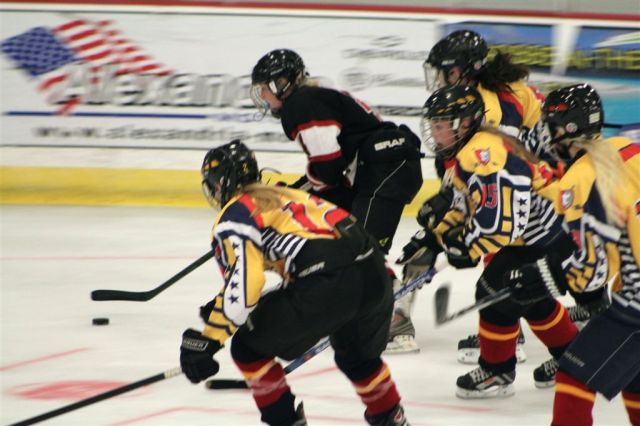 [Possibly my favorite photo of the weekend.  Shelby on a jailbreak; a posse from the NE Metro-area in hot pursuit!]

[Then with Madi at the net.] 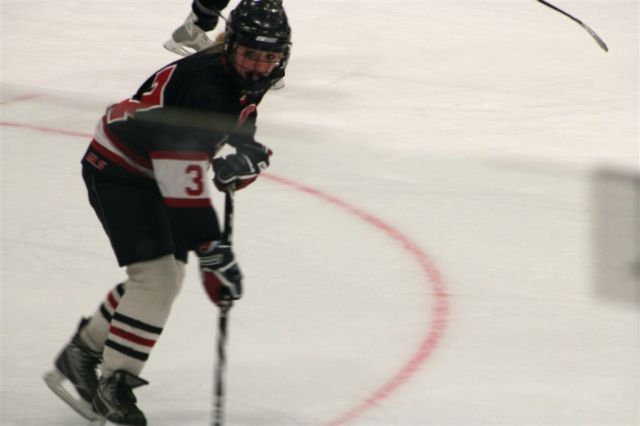 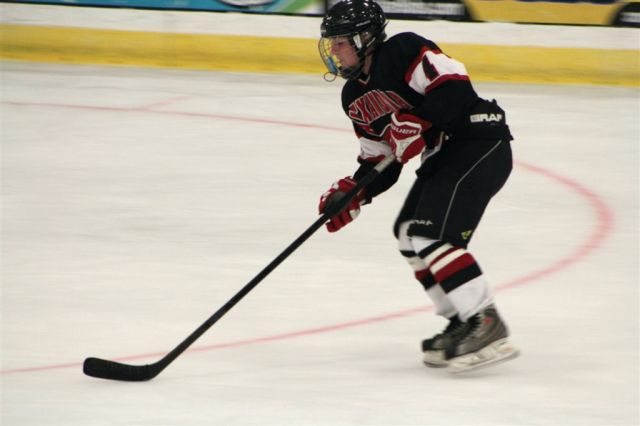 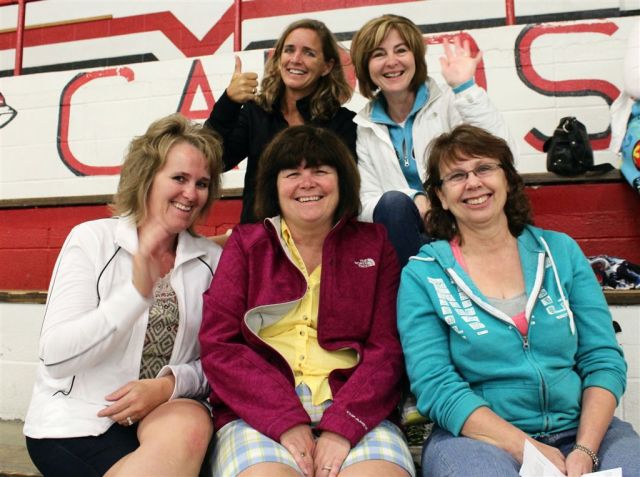 [And the day ended with a final (?) graduation party.] 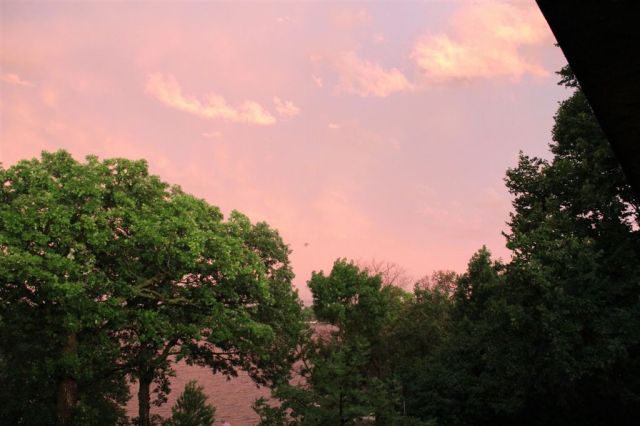 [Warm-ups for day 2.  The players were reportedly stiff and sore.  Hey, there weren’t even any practices going into this . . .] 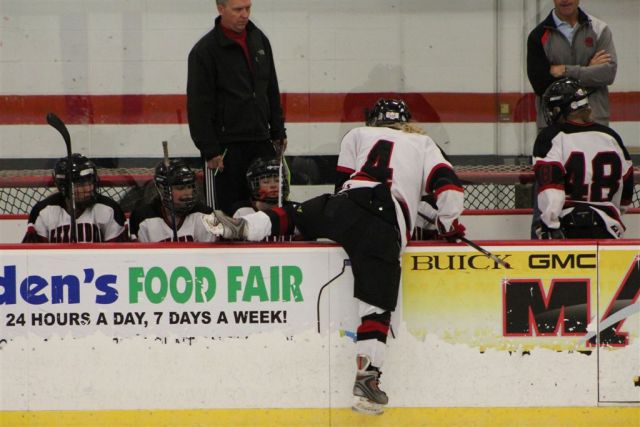 [No, the bench.  I think she just scored!  We noticed that the lower half of the ads in front of both benches have pretty much been kicked off by players climbing into and out of the bench.  🙂  ] 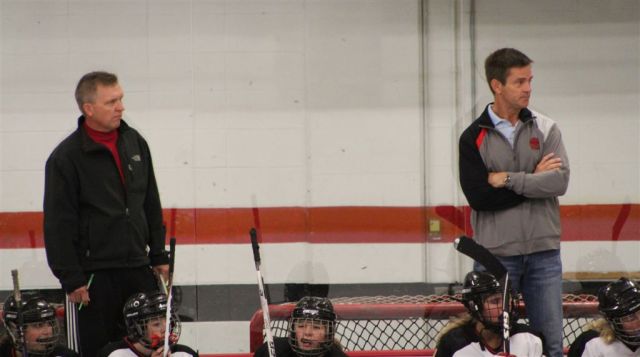 [Coaches Iverson and Illies . . . and a bunch of girls chewing on their mouth pieces.]

[Onward!  To the face-off circle!] 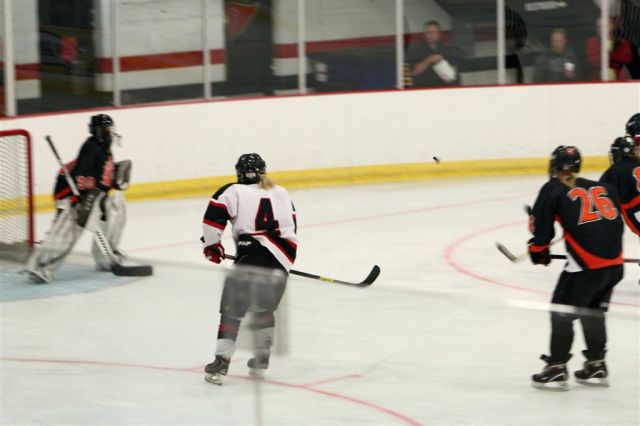 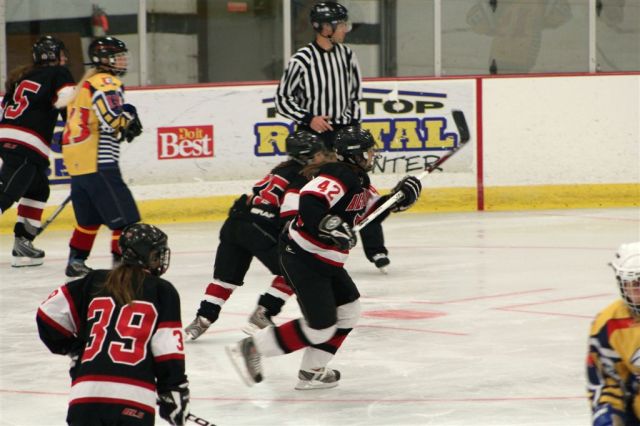 [Game 4, we’re Back in Black!  I already can’t remember what I did between games?]

[How you holding up, Bailey?] 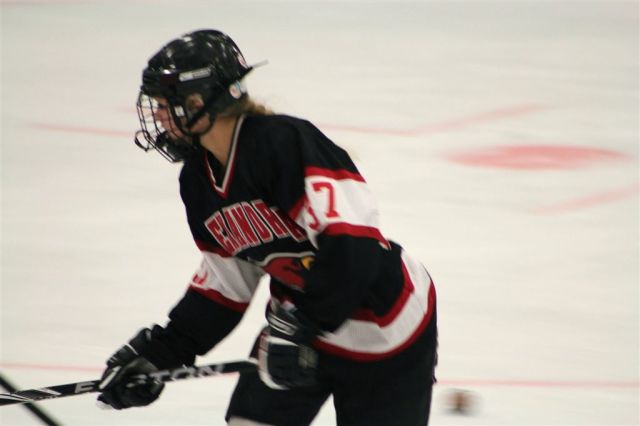 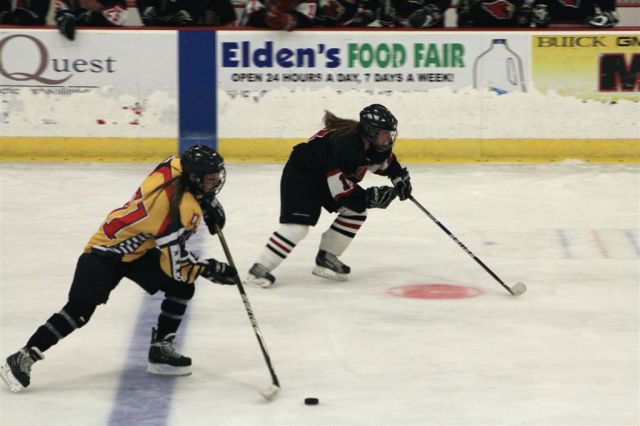 [Becca – the best photo of this day.  No goal though!  Arrgghhh!]

[Shanee’ had an open corner, but the puck was behind the net.  Wash those jerseys, ladies.]

[I don’t know what I said, but whatever it was, I’m sticking with it!]

THE NEXT HOCKEY GAME IS OVER FOUR MONTHS AWAY!  😦

[Epilogue:  Jerry Prettyman, Super Fan and grandfather of Danielle Justice, was taking tickets for the car show this weekend and thus could not make the hockey games.  He did file the following report, however, which I am more than delighted to share:

Hi Tom,   I don’t know if it is good or not, but your photography is so good that I feel I don’t need to travel or go to games.  Your pictures are better then I see when I go..

The Journey Begins Thanks for joining me! This is the follow-up to the original, “alexandriacardinals.wordpress.com,” which overwhelmed the system’s ability to handle it any more. Thus, this is “Part 2.” As the original was initially described: 10-26-07-4 “It all began in a 5,000 watt radio station in Fresno, California” . . . wait a minute, that was Ted Baxter on the Mary Tyler Moore Show! Let’s see . . . oh yeah, it all began in 2003 when retirees, i.e., old people, in Alexandria, Minnesota, who had no desire to become snow birds, went looking for mid-winter entertainment here in the frozen tundra of West Central Minnesota. We discovered girls’ high school hockey, fell in love immediately, and it remains our favorite spectator sport to this day. Initially, and for several years, reports on these games were e-mailed to those who were actually snowbirds but wanted to keep abreast of things “back home.” It was ultimately decided a blog would be more efficient, and it evolved into a personal diary of many things that attracts tens of readers on occasion. It remains a source of personal mental therapy and has yet to elicit any lawsuits. ~ The Editor, May 9, 2014 p.s. The photo border around the blog is the Cardinal girls’ hockey team after just beating Breck for the state championship in 2008. It’s of the all-tournament team. The visible Breck player on the left is Milica McMillen, then an 8th-grader – she is now an All-American for the Gophers. The Roseau player in the stocking cap I believe is Mary Loken, who went on to play for UND; and the Cardinal player on the right, No. 3, is Abby Williams, the player we blame most for making us girls’ hockey fans who went on to play for Bemidji State. *********************************************************************************** Photos contained herein are available for personal use. All you have to do is double click on any of the photos and they will become full screen size. You can then save them into your personal “My Pictures” file. They make lovely parting or hostess gifts, or holiday gifts for such as Uncle Ernie who wants to see how his grand niece is doing on the hockey team. If any are sold for personal profit, however, to, for example, the Audubon Society, National Geographic, Sven’s Home Workshop Monthly, Curling By The Numbers, or the World Wrestling Federation, I only request that you make a donation to the charitable organization of your choice. You have two hours and fifteen minutes. Pencils ready? Begin! **********************************************************************************
View all posts by tomobert63 →
Gallery | This entry was posted in Uncategorized. Bookmark the permalink.