When you come to the fork in the road, take it!  Thus, we take a mini-break from the usual indulgences of this blog – which currently involve such as graduations, track meets, music . . .  This involves a tour of an ecohouse in the far reaches of Southwestern Douglas County – the Holmes City lakes area (there are dozens and dozens of them in this most watery part of the county), specifically around Lake Rachel and Echo Lake.  And I think the blog is the most efficient way of passing on the experience to the participants.

This is Sue and Van Gooch’s two-year old house overlooking Echo Lake.  The energy costs to operate this house are . . . ZERO.  They are happy to explain how to any and all interested parties.  On this day, the Citizens Climate Lobby took the tour. 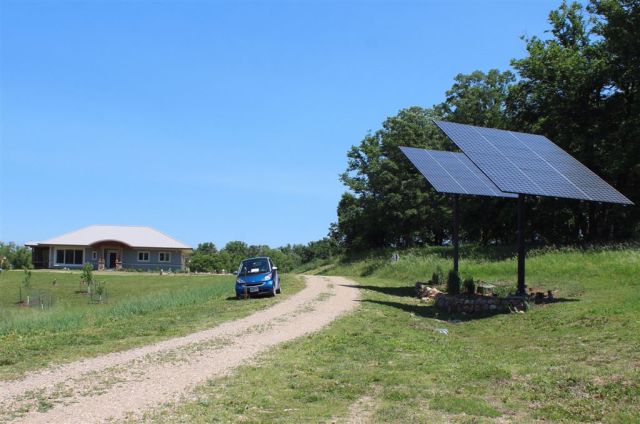 [This is clue No. 1.  Two southward facing solar panels.  The perspective provided by people in following photos will show these are rather high above the ground.  At the time, they had to be built at such height because of danger for kids.  And at that height, they have to be able to withstand 100 mph winds.  I’m not sure if the former is still a requirement.] 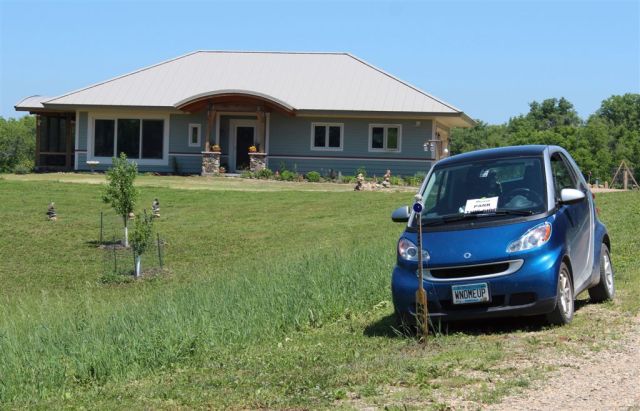 [Note the license plate on their car.  The supervisor said I had to get a photo because we always forget what it says. 😉  ] 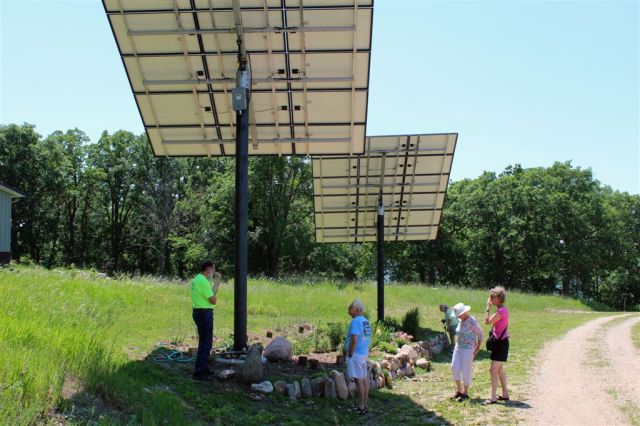 [Let the seminar begin!  Van, a retired biology professor from U of M, Morris, said the panels produce enough electricity during the day that the excess is “sold” back to the grid.  At night, they have to dip into the electricity deposit, but it all balances out.  He noted the panels are actually more efficient in the winter – the cold and the clear sunny days are most conducive.  It was 90 degrees and windy while we were there, so we asked if he considered wind turbines.  He said he looked into them but since they having moving parts, unlike solar panels, there is a lot of maintenance involved.]

[A sample wall section – a 2×6, a vapor barrier, a 2×4, with insulation blown in.  Makes for an incredibly tight house.  The house has a steel roof, cement board siding, in-floor heat and cooling (including the garage), ceiling fans, triple-pane fiberglass framed windows, all one level (no steps or ridges), 36″ doors . . . well, you get the idea.]

[Van was concerned about exterior aesthetics – a square house is the most energy efficient but lacks in attractiveness.  He added extended eaves, a porch, and arches to break up the straight lines.  I think it’s cute in the cottage style way!  🙂 ]

[I think we all loved the interior – beginning with the tile compass as you enter the front door.  Thanks to Ken Howell for the use of his foot for perspective.]

[They did make some energy efficiency concessions.  These big windows face west – but as they say . . . the view!] 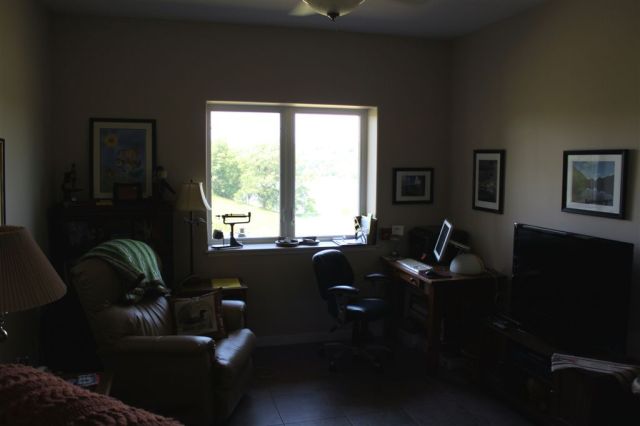 [Love to have that office!]

[The house was featured on the front page of the Echo Press just about a year ago.]

[Before we left Van had to show us his “all-natural” croquet field on the hill on the east side of the house.] 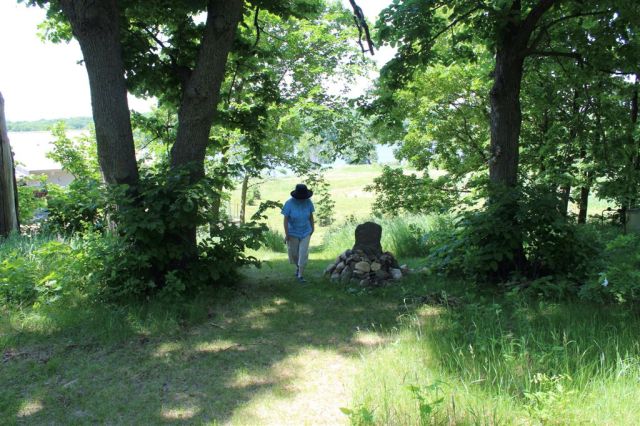 [I mentioned our cars should have been moved for the purpose of feng shui.]

[Time to go – there are graduation parties everywhere!] 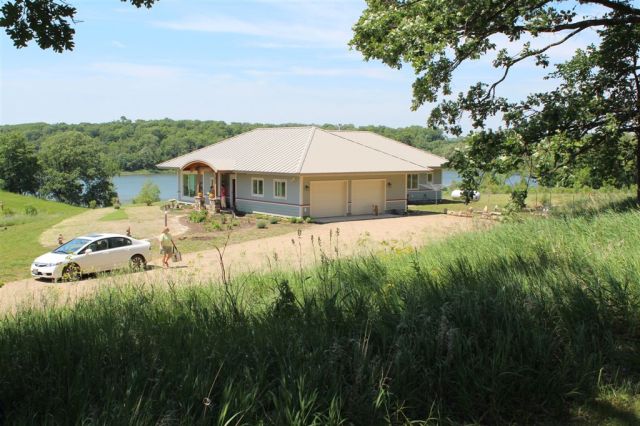 We were early arriving (from a graduation party not far away), but Van had told us there was a cordwood house nearby.  So we stopped and got directions and went there first.

[Regular, and possibly even irregular, visitors to this site are aware that our Indiana kids are planning to build a retirement home in the cordwood style on their property just north of Itasca State Park.] 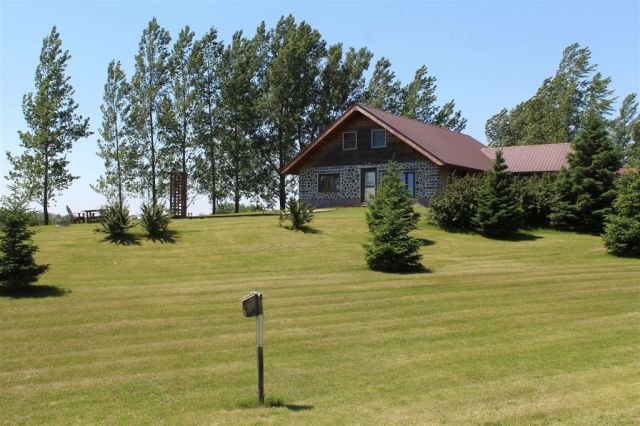 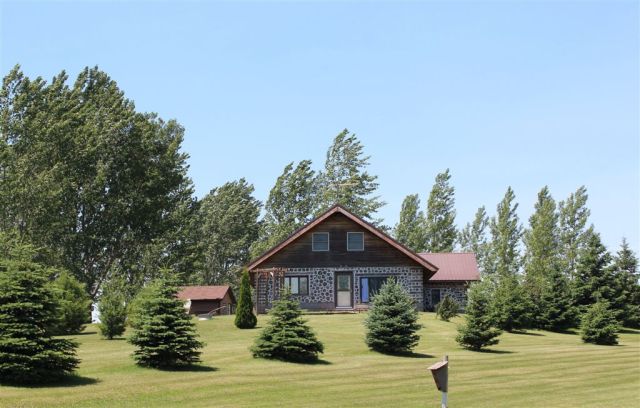 [These small lakes, ponds, sloughs, whatever, are everywhere in this part of the county.]

[A sea of white wild flowers.]

Speaking of our Indiana kids, son-in-law is in state even as we speak fleshing out their pole barn.  They had the pole barn built for storage and a place to live for when they eventually move there and build their cordwood home.  The following photos are part of his daily reports – just up the road from Lake Itasca. . .

[Because he gets up this way more often than we do, he provides updates on Wadena’s recovery from the tornado.  The new high school looks ready to go.]

[The driveway into their propery.  Yeah, it’s pretty wild but then they can only get up there a couple times a year now.]

[He’s framing and insulating the pole barn on this two-week trip.] 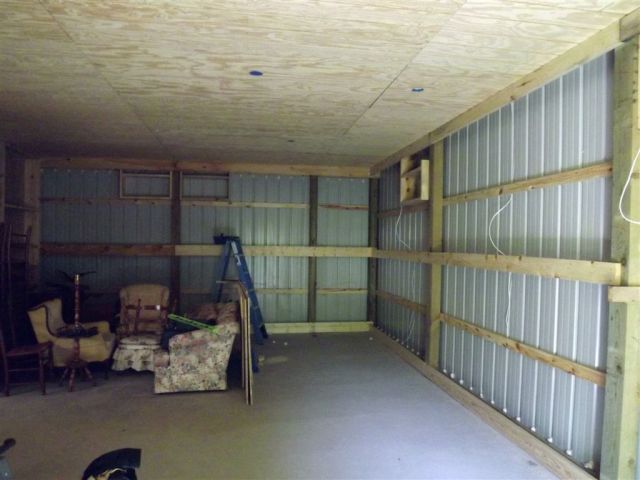 And we’ll leave you with some of his shots of Lake Itasca . . . 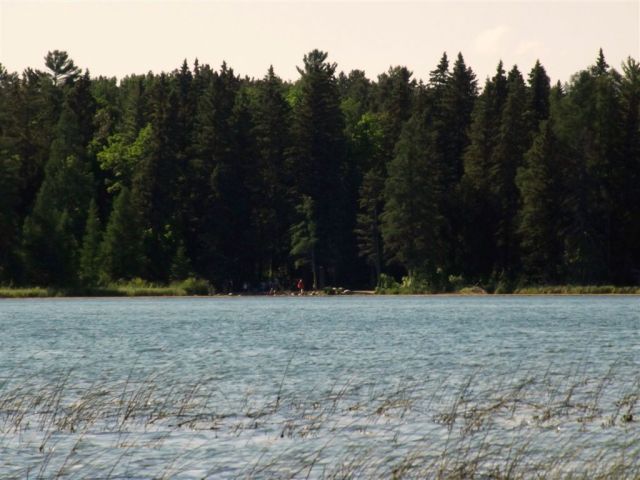 Well, that wraps up this puppy.  Just waiting for the supervisor to get home with lunch!  🙂