3 Schools and a Bar*

[* and Other Between Seasons Stuff] 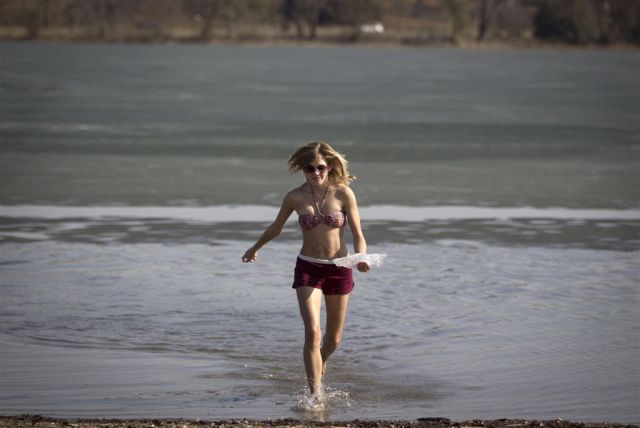 [We have to begin each post with a reminder that, yes, it is still winter in Minnesota.  Nevertheless, people were wading in Lake Nokomis in Minneapolis on March 15.  Photo from the front page of the Minneapolis StarTribune.] 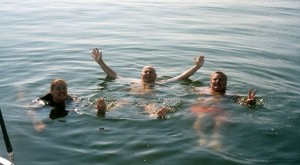 A guy walks into a school.  The Alexandria Technical and Community College.  It is the opening program for the spring session of Senior College.  Seniors want to make sure those synapses keep firing!  Don Shelby is the lead-off “performer.”  As the longtime TV anchor of WCCO news in the Twin Cities, Don is obviously well-known in these environs.  And he has maintained (well, having never seen it, I have no idea if it is maintained) a summer residence on Lake Ida for something like 25 years (as I recall).  He noted he considers Alex to be his home (though his main residence is still in Minnetonka).  Accordingly, the auditorium was SRO.

Don was there to talk about his book, The Season Never Ends, which teaches life’s lessons through basketball.  He was a point guard for his high school team in Indiana.  Now, the supervisor and I had recently read his book as a loaner from the friend.  But Shelby’s Indiana connection with the supervisor mandated that I buy the book so Ruthie could get Don to autograph it.  Plus, in a kind of Kevin Bacon eeriness, Shelby and I are the same age; his lecture was on March 15, which would have been my Dad’s 88th birthday; last year on March 7, which would have been my Mom’s 88th birthday, I made 36 free throws-in-a-row, which to my memory is better than I had ever done in my youth; which ties us back to the basketball theme.  Well, I guess you had to be there.  (Oh, Dad hated basketball; Mom loved it!) 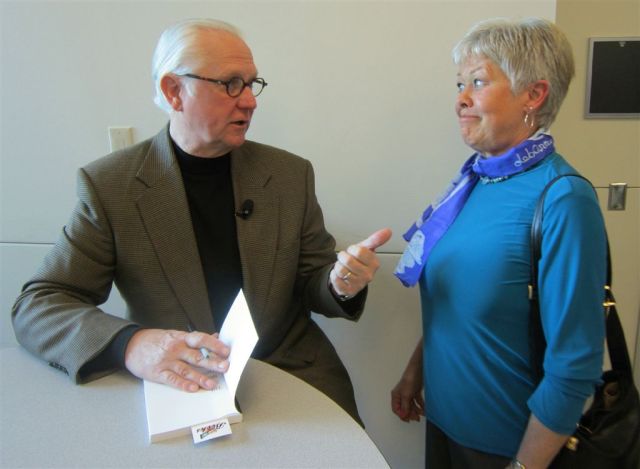 [“I went to IU!  Do you like Bobby Knight?”  (Shelby went to the University of Cincinnati – largely because the Bearcats had won back-to-back national basketball championships in ’61 and ’62.  Ruthie’s daughter, Jami, went to UC.)] 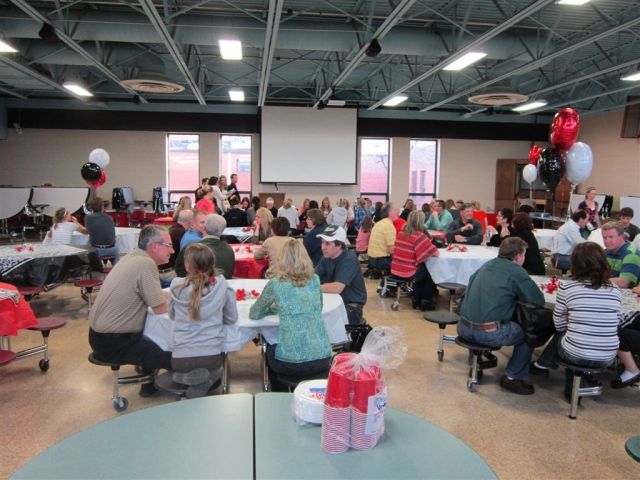 A guy walked into another school, immediately after the first school.  Jefferson Senior High School.  The girls’ hockey team was having their post season banquet, and the Super Fans were invited to prevent an age discrimination case.  Since almost all remaining Super Fans have fled south, for reasons unknown, the supervisor and I were the sole representatives for those who sit in the stands absent a relative on the ice.

Head coach Andy Shriver served as the emcee; the versatile and indefatigable hockey moms served up the vittles. 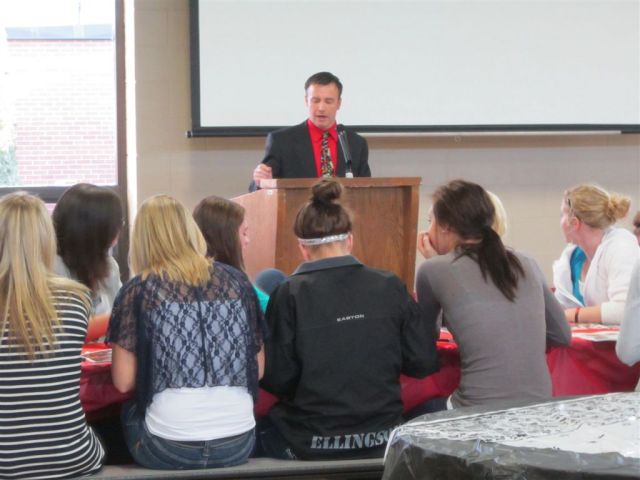 [The JVers with a fine 16-4-3 season will step into varsity roles next year.] 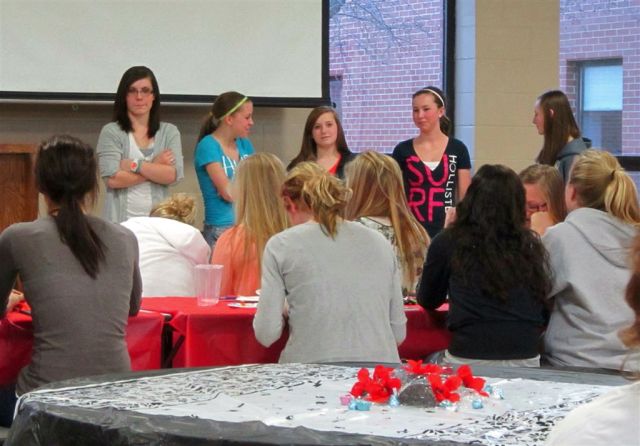 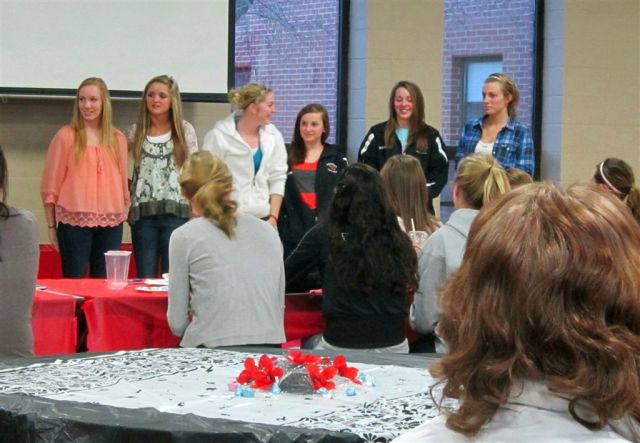 [The junior class – Shanee’ (far left) and Shelby (3rd from left) were elected captains for next year.]

Since you had to leave early I’ll give you a rundown on the awards as I remember them:

Thanks for coming!  – In-house stringer 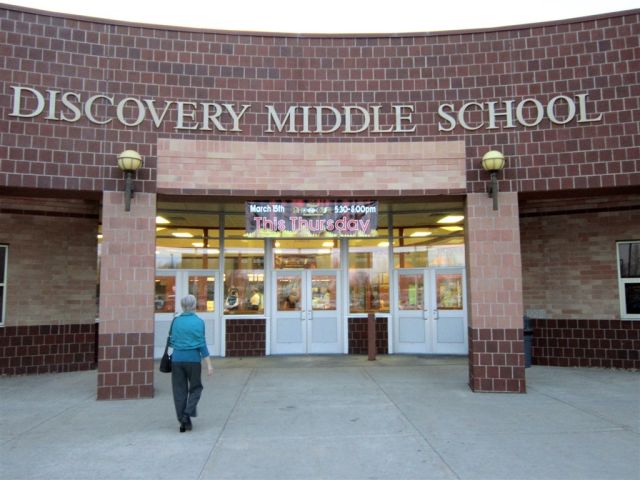 A guy walked into yet another school.  Discovery Middle School.  It was the 3rd Annual Student Showcase Celebration, of which the Education Foundation is a sponsor, and of which I am a board member.  Thus, it was my job to appear at the event – and help with the clean-up (my specialty) afterwards.

[The supervisor checks out the displays.] 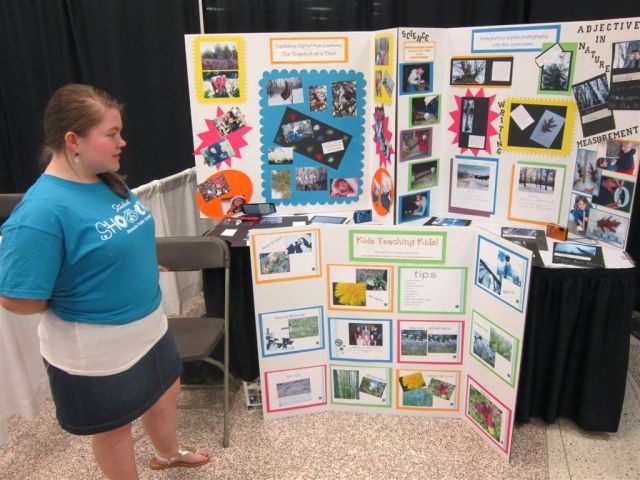 [A 7th-grader gives me advice on the finer points of photography – thank goodness!] 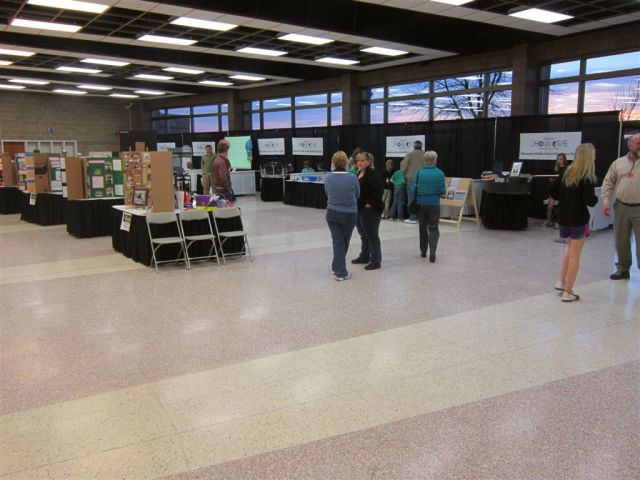 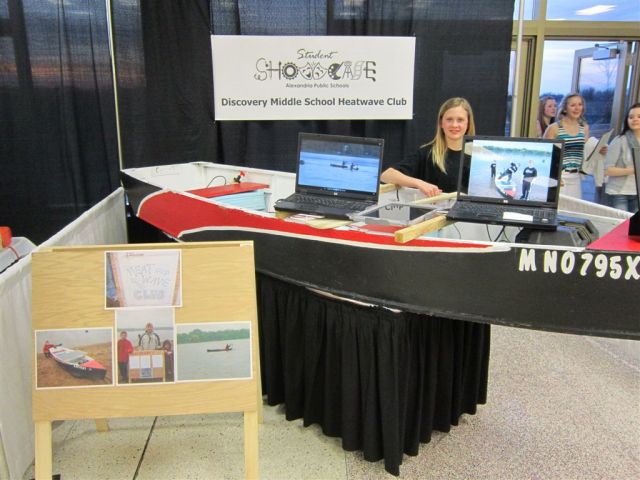 [The Heatwave Club – a regular grantee of the Foundation for their science projects.] 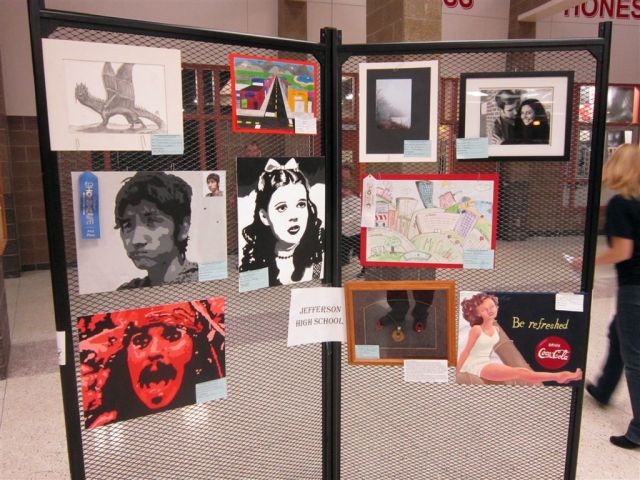 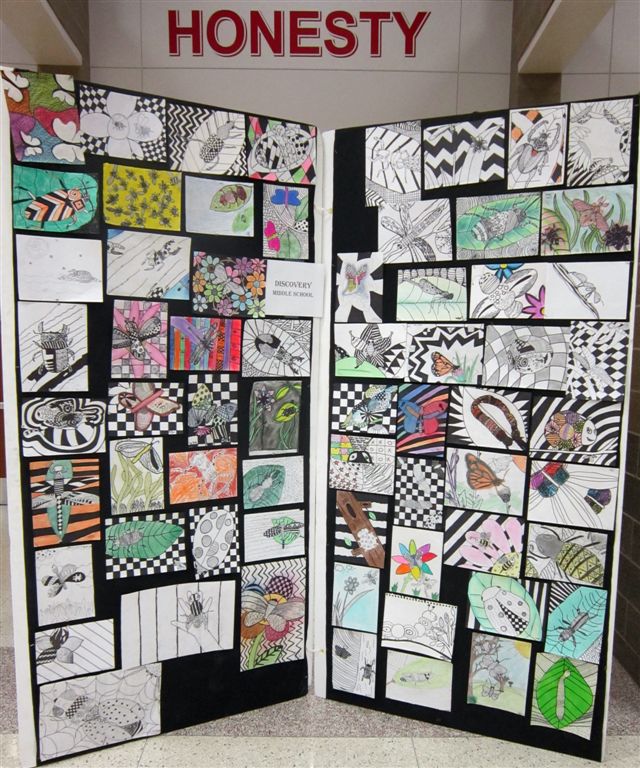 [Where I displayed my tablecloth folding skills . . .]

And then since it was Thursday night, date night (the Bar part) . . . 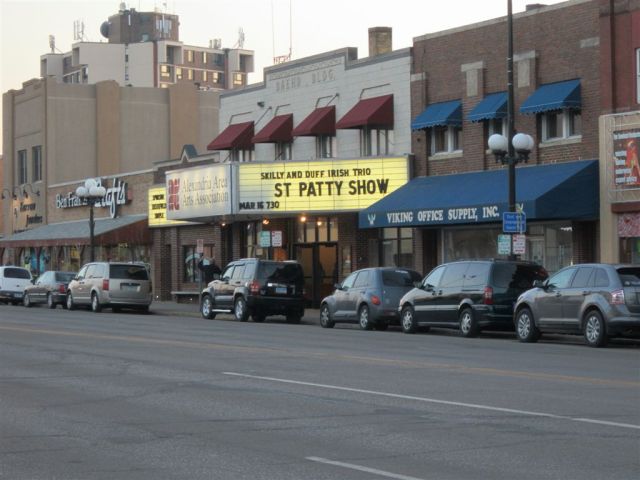 [On our way from SAWA to the theater.  Could be on the “favorite photos list.”  Kinda urban-ish, don’t ya think?] 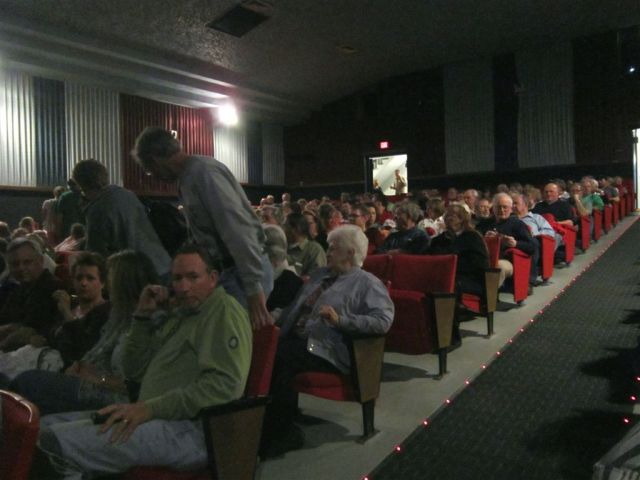 [A darn good crowd for the AAAA Theatre fundraiser.] 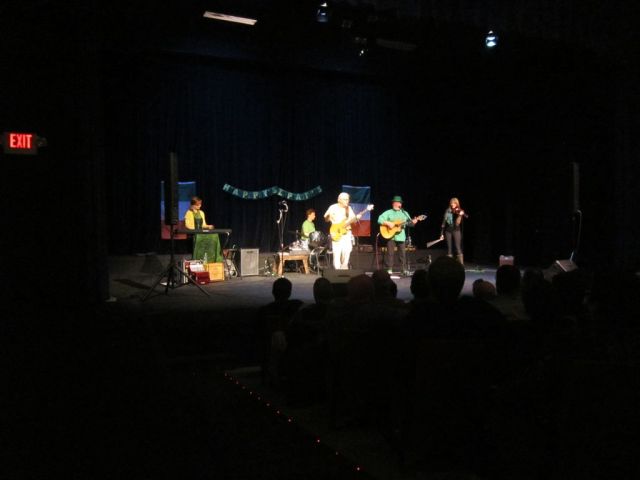 [Local sisters as the Irish dancers.  I’m sure someone will remind me who they are again?]

[A charming out-of-focus photo of:  “Hi, My name is Lili Satterlee.  I’m 13 years old.  I’m in the 7th grade at Sauk Centre junior high.”  Spoken with the ease and aplomb of a seasoned performer – which she is.  She has been performing with Skilly & Duff since she was 10.] 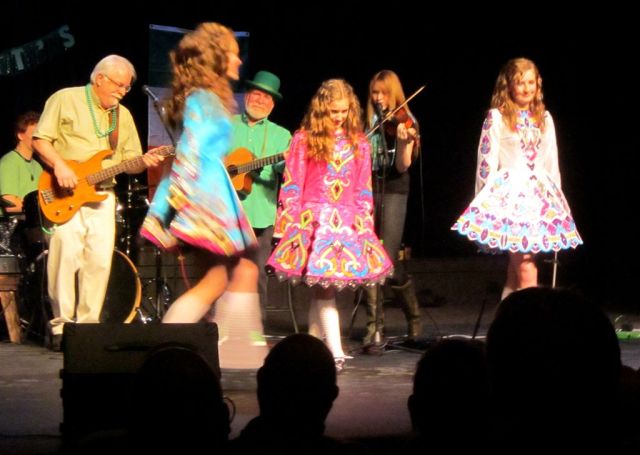 [Speaking of seasoned performers, Sami, on a health sabbatical from her freshman year at the University of Colorado,  has been playing with Skilly & Duff for . . . 7 years?] 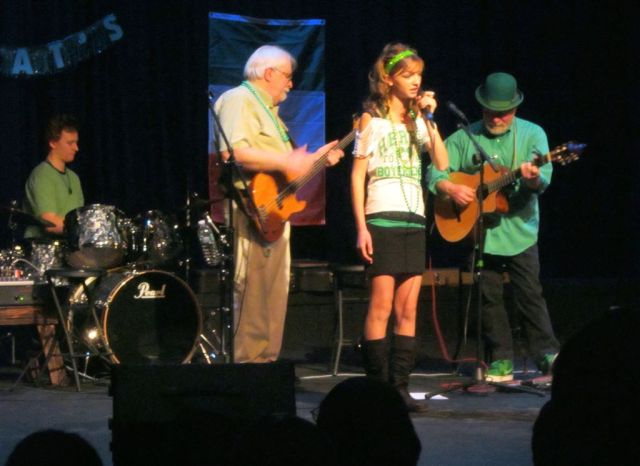 [The redoubtable Ms. Steidl has been in cast for 3 months now as she hopes to “repair” her bowing arm.  She did just great even with the cast.]

[The next morning the supervisor got this shot while I was at the Y.]

And earlier in the week:

[The thermometer hit 81 on the lakeside deck last Saturday.]

[ . . . and the straw snowman at the winery said good night to the setting sun.]

[By Tuesday, the snow was almost gone.]

[When we went to the high school for the pottery sale and chili feed for the food shelf.]

[She purchased a pottery bowl with feet and a blue navel for me.]

[The wall of the JHS cafeteria.  The cafeteria has been reconfigured from my day – because I have no recollection of it.  😉  ] 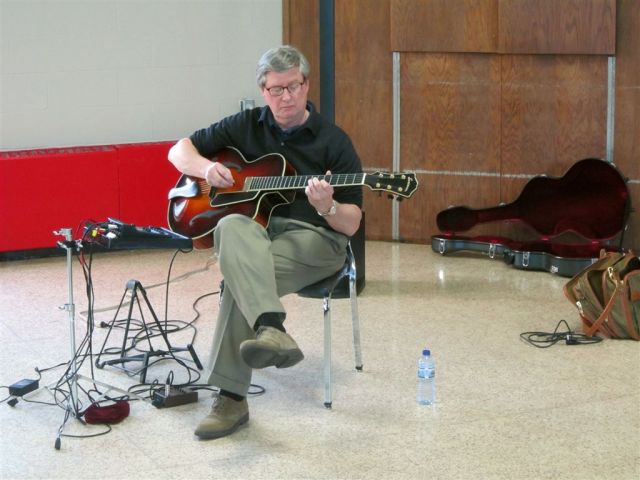 [Terry alleges my camera made him prematurely gray?]

[I took a photo of the courtyard.] 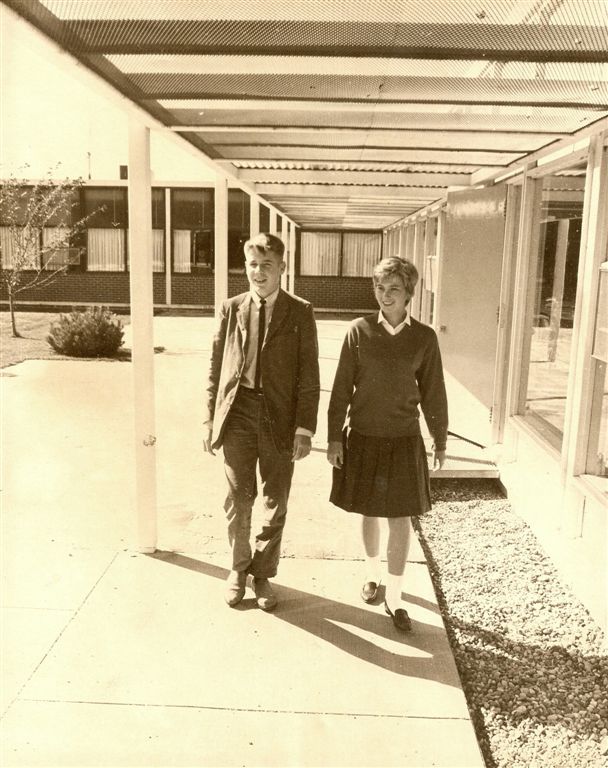 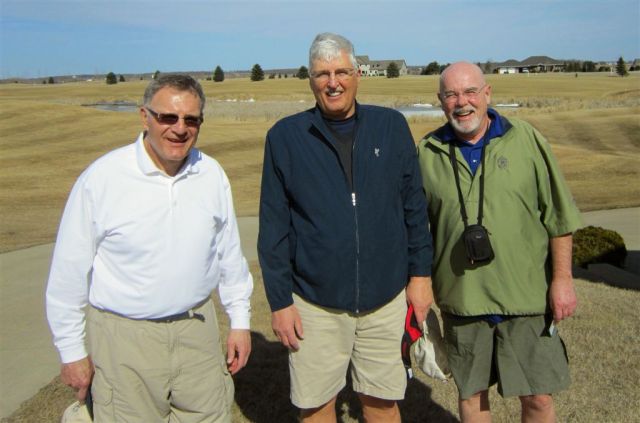 [The Boyz of Summer golfed at the Lynx in Sauk Centre on Wednesday.  Super Fans all, Robo (on the right) and I accompanied Don Nelson (middle) as he completed golfing in 12 consecutive months in Minnesota (April 2011 to March 2012), which as we all know now no longer has winters.] 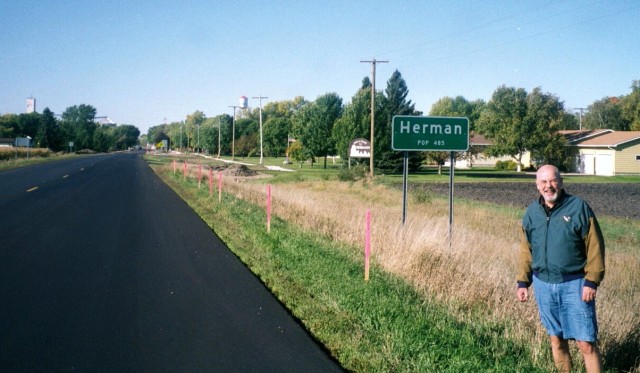 [Hi, I asked DuWayne Emerson if it was okay for you to use his photo, (info sent earlier) and he said it was okay.  He goes by Dewey Emerson.  There were 100 of us out on a fishing charter boat out of Fort Myers, and DuWayne’s fish won the prize for the biggest catch of the day.  He and wife Betty (Prchal) Emerson graduated in 1964 from Alexandria, and are now retired, splitting their time between in Alexandria (Lake Ida) and Fort Myers.  Betty worked at the Minnesota High School League for many years, before her retirement from there, so they are Super Fans of Minnesota High School sports.  They attended many of the state tournaments for both girls and boys sports.  – Taryn  Nelson Flolid, Alex class of ’74]

[“Roadblock’s” stellar hockey career came to an end when the Gusties lost in OT in the national semi-finals.  Thanks for the memories, Danielle!  Photo from her granddad.] 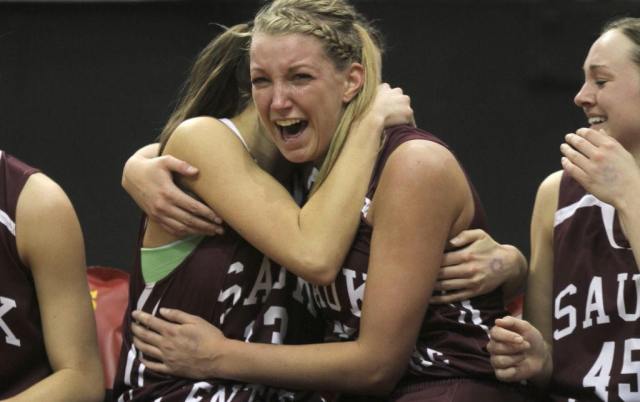 [Neighboring Sauk Centre lost in the state championship class AA game today – in a very close game to Providence Academy.  Providence split with class AAA champion, DeLaSalle, this year, only lost by 5 to class AAA’s No. 2, Fergus Falls.  That’s 6’1″ senior Kali Peschel in the photo (from the Strib) who’s going to play D-1 for Iowa next year.] 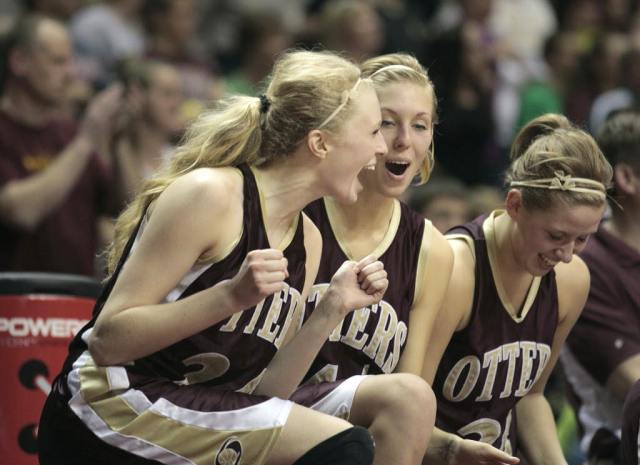 [Fergus Falls, our section champs, lost in the class AAA semis to eventual state champion DeLaSalle.  It was a close game.  DeLaSalle blew out Richfield in the championship game.  From what I saw, our Cards would be 3rd behind DeLaSalle and the Otters in the class.  This and the following 3 photos from the Strib.] 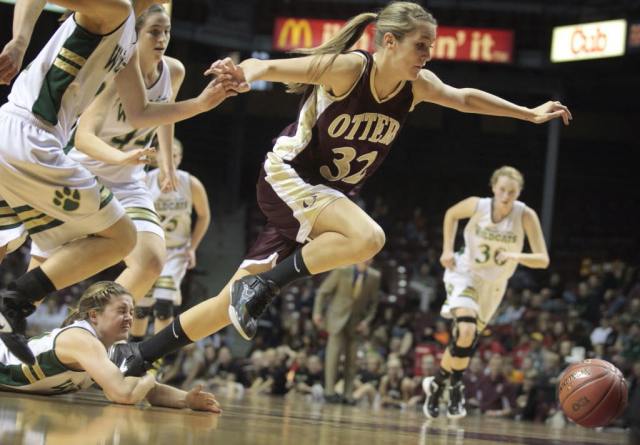 We’ll leave you now with some of the last shots of winter: 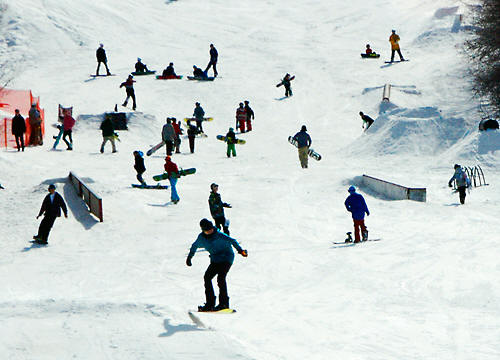 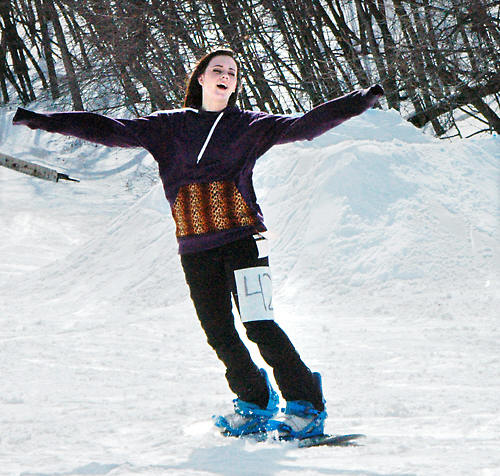 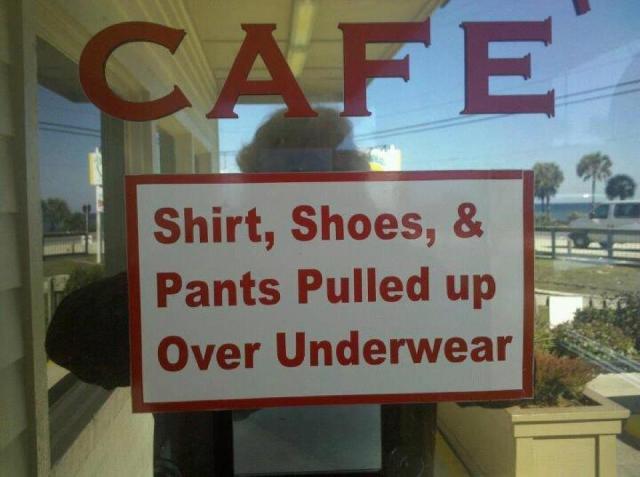 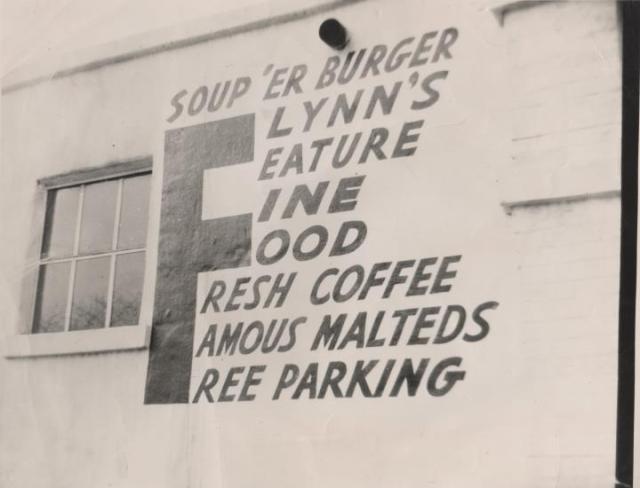 [For “The Nanner” fans – the Flynn family restaurant in Kalamazoo, Michigan.]