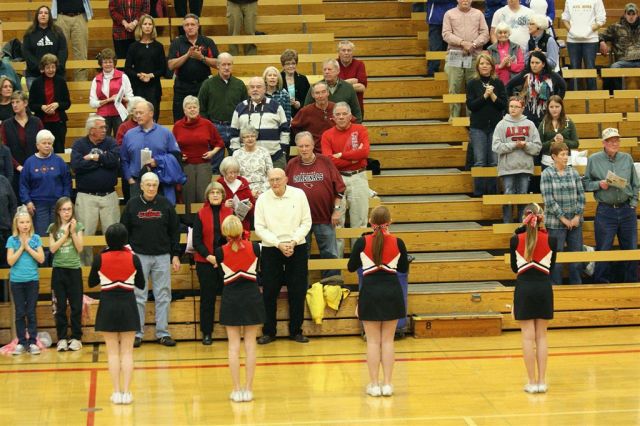 [The Brainerd game is about to begin.  The Super Fans are standing just to prove they can do so.]

This is a continuation of Part I, as Part II’s often are.  As previously noted, all the photos in this posting will be from the staff photographer, Greg Trumm, who is internationally-known as the father of Lauren.

[Cara doubles her basketball play with her science project on static electricity.] 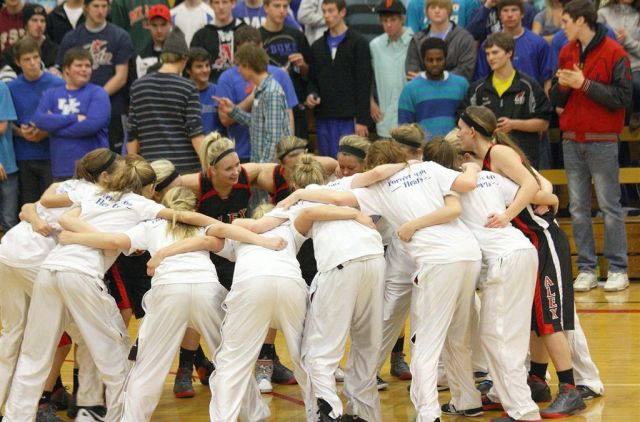 [The boys’ team is there for support – and to pick up pointers.] 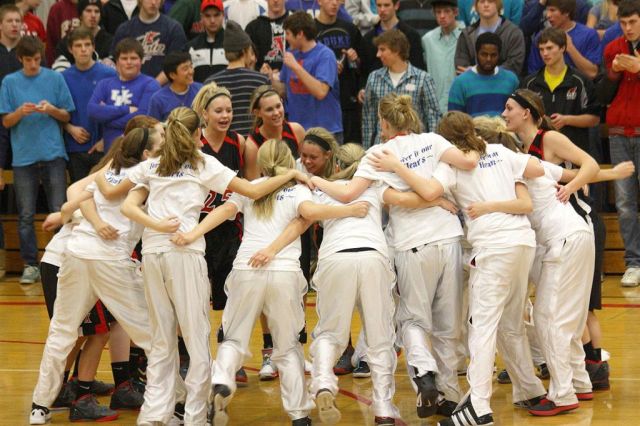 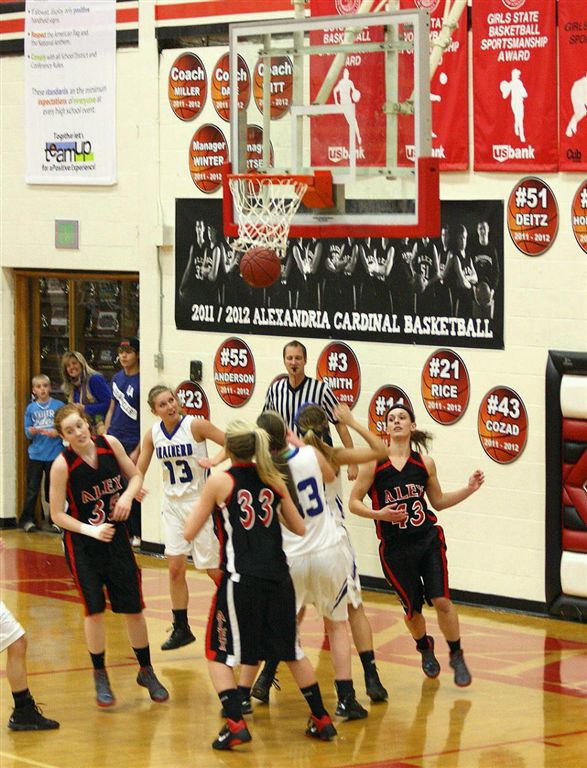 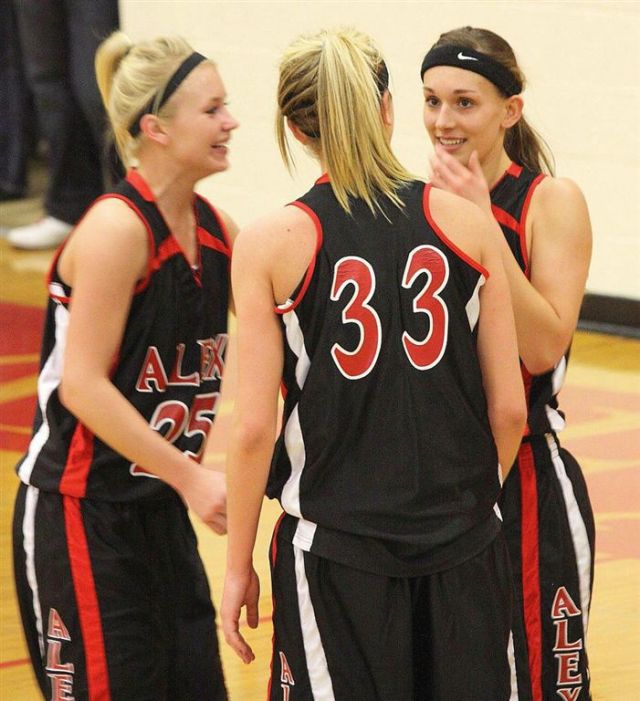 [A little something for the trophy case.] 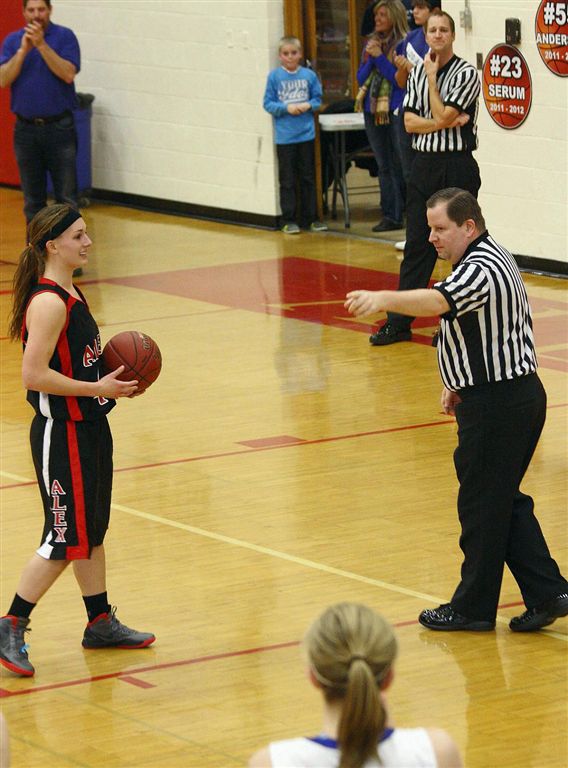 [One of the rare exceptions where hugging is permitted on a basketball court.] 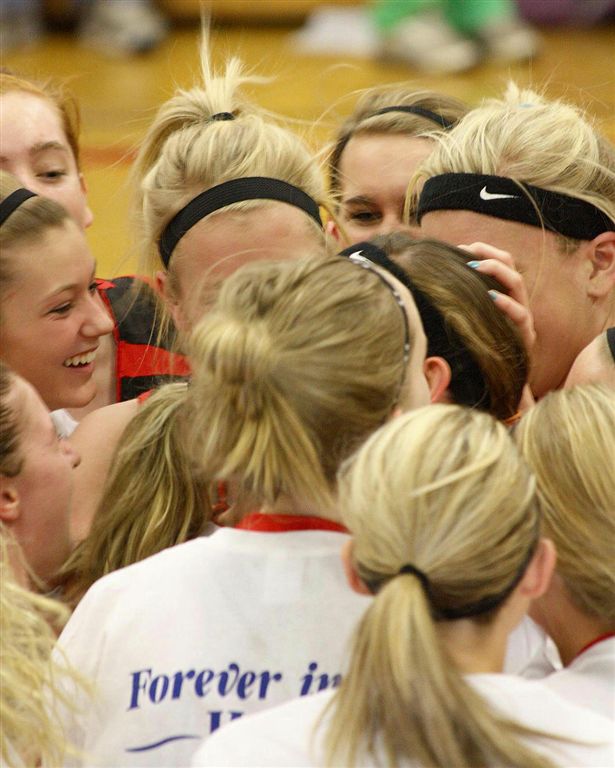 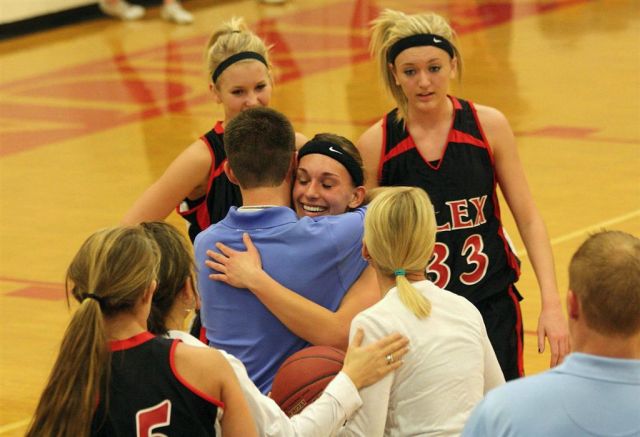 [Please don’t ask me to describe the nail polish.  The supervisor can tell you I’m totally incompetent on such things.]

[For the first time in a while, we employed a full-court press for most of the game.  6’1″ Whitney played the point a’la Alli Haar from last year.  The pressure created about a gazillion turnovers.]

[Kalli again.  Even with her sprained wrist she made her first 4 free throws.  On her next visit I happened to mention she was, at the moment, our best free throw shooter.  She missed both.  The supervisor jumped on me with both feet and a waffle iron.  Her first rule of fandom is to never say anything nice about anyone for whom you are cheering because you will jinx them.  Properly chastised, I spent the rest of the game “booing” under my breath.] 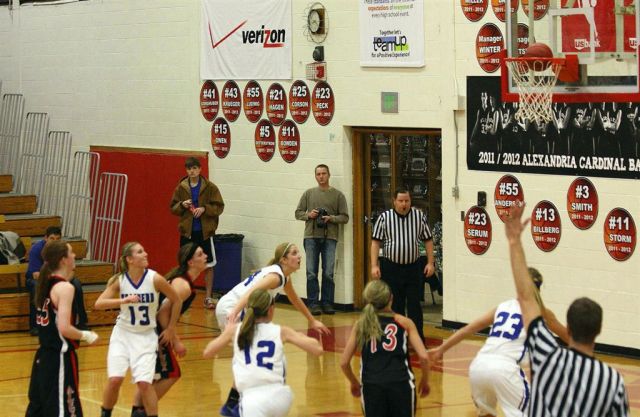 [We weren’t great from the line – but certainly much better than in the Little Falls game.] 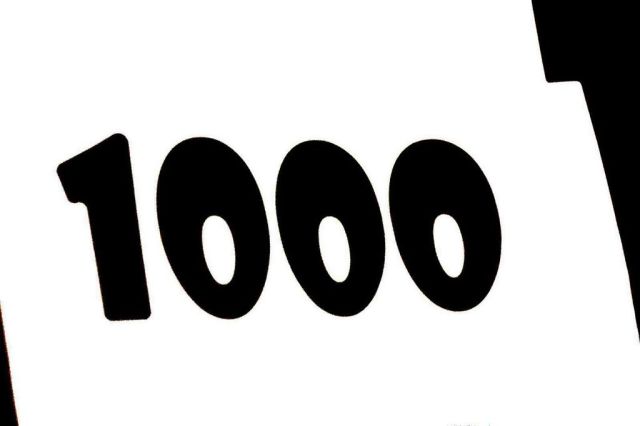 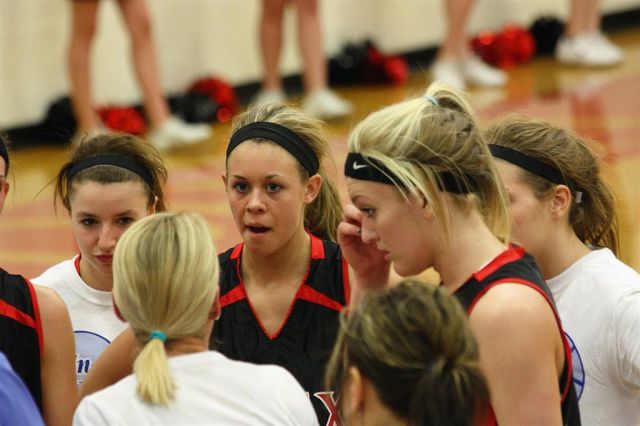 [Amanda C and Cara on the forever double-team.] 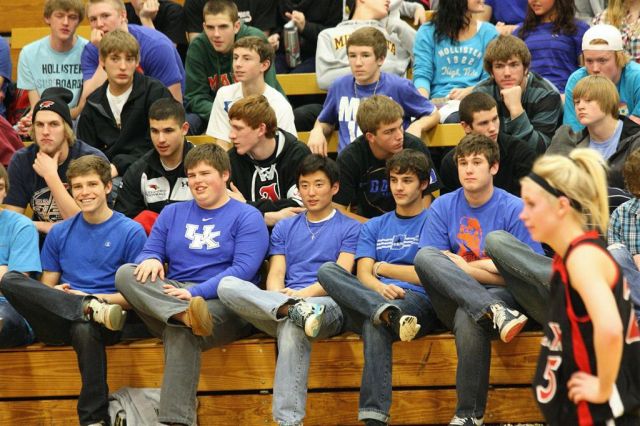 [Who said high school boys have two left feet?  Actually, I think that would be my folks.  Cara won’t look at ’em.]

[Dani converts a steal into a breakaway lay-up.] 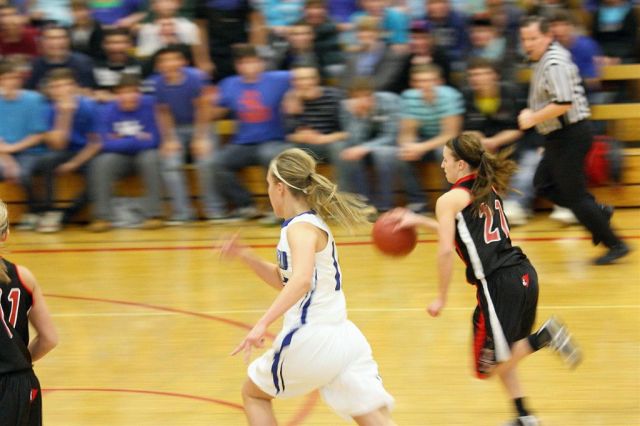 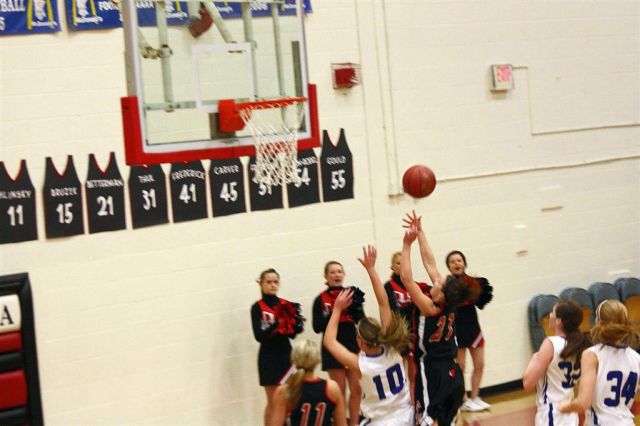 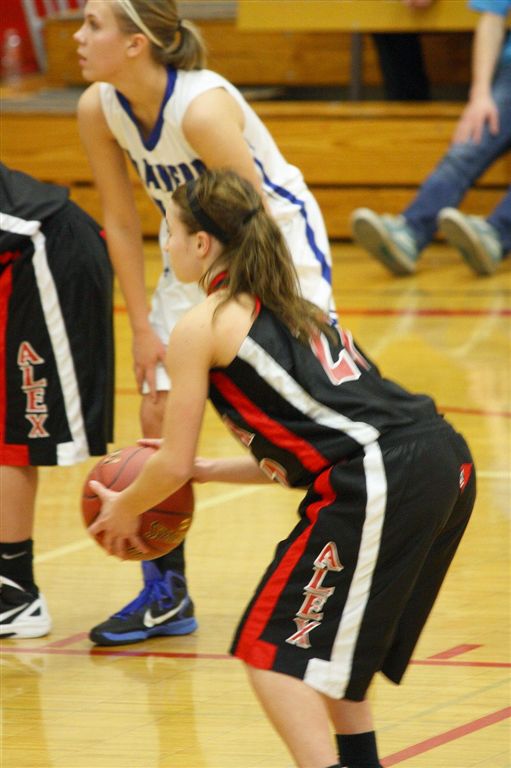 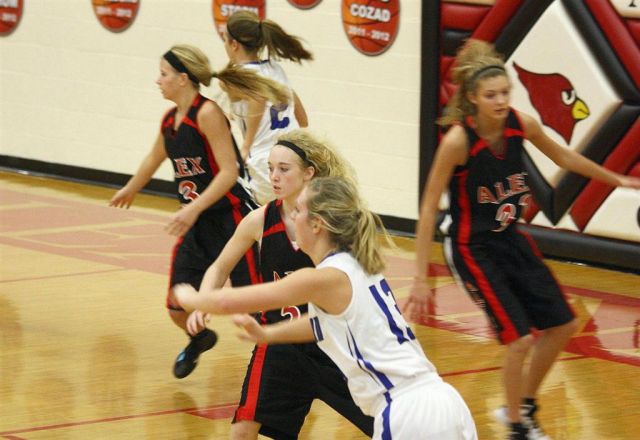 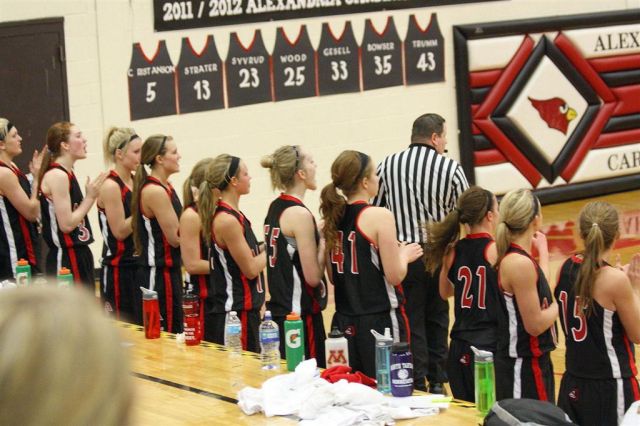 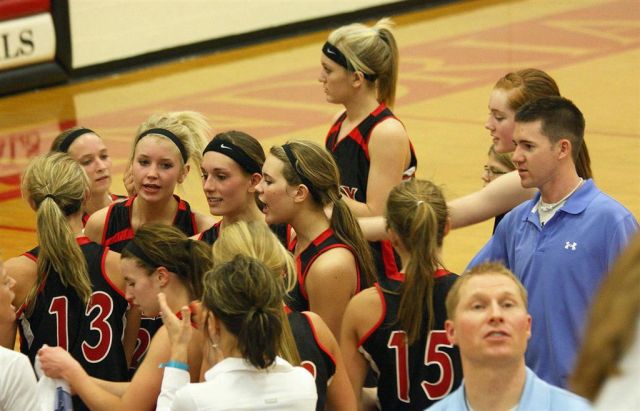 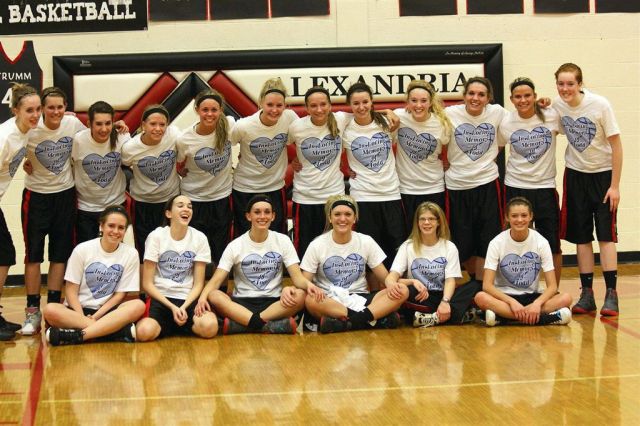 [“I was going to go into the family business.  But I’m getting pretty comfortable now at this media thing!”]

[“Really?  That’s all you guys get paid?  Pharmacology is looking good again.”] 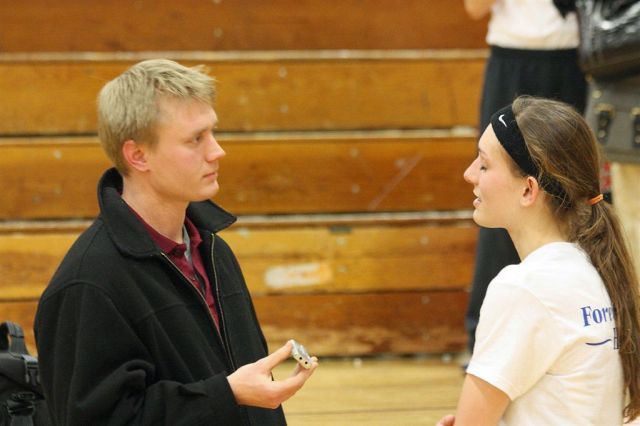 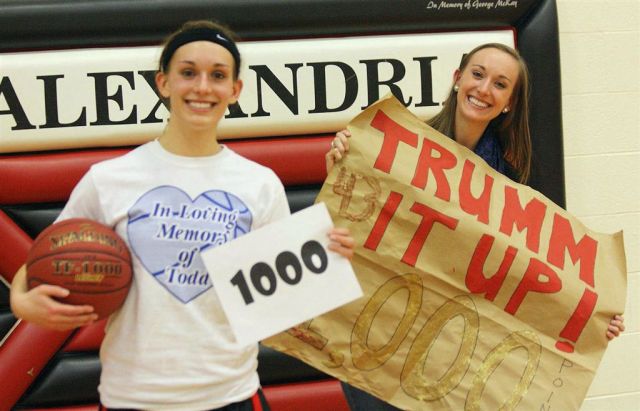 [“My oldest sister, Justine, who is a 1st-year Med School student @ UMD.”] 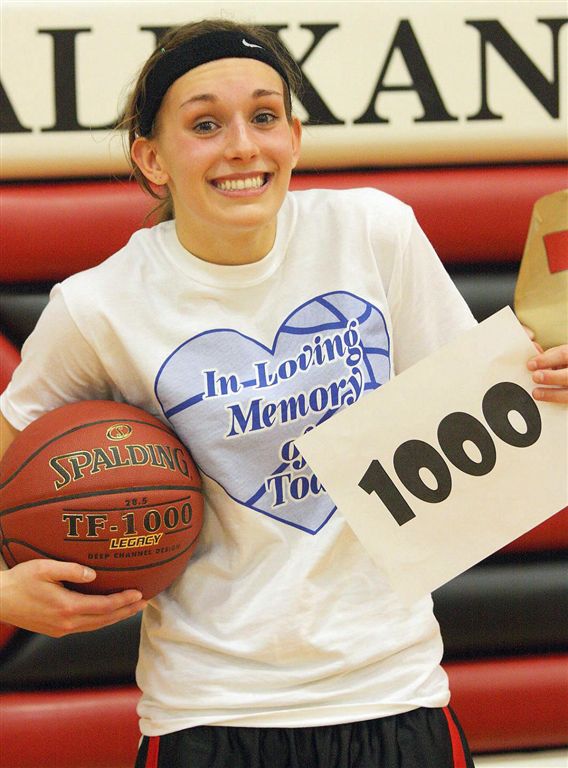 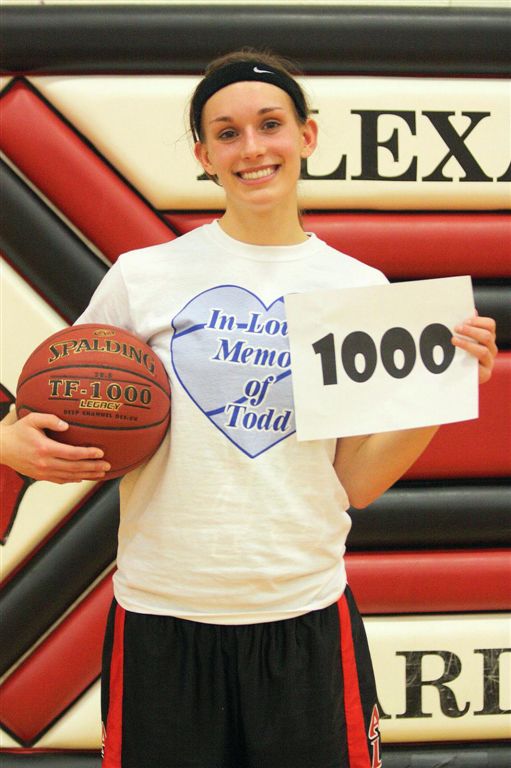 And a report from Basketball Dan:  Just got back to the motel from the site of one of your historic conquests…the Pit in Albuquerque.  Unfortunately couldn’t get far enough west to visit the evil Burger King that devours teeth.

For all you Hoosier fans out there (the Supervisor!), B’ball Dan forwarded the above with his missive.  Steve Alford has been the basketball coach at the University of New Mexico since 2007.  Dan and I were present for the Final Four at The Pit in 1983, the year Jim Valvano’s North Carolina State Wolfpack upset Houston’s Phi Slamma Jamma for the national championship.  I also enjoyed a $600 burger (the cost of a crown) at a Burger King there when I cracked a tooth on a piece of gristle.  For those keeping keeping score at home, I have three crowns – all as a result of cracking a tooth on a fastfood burger!