June 21, 2008.  From McKinley to the Big Boat.  Upon arrival at the lodge, all hands head for the deck to while away the evening ogling the mountain. 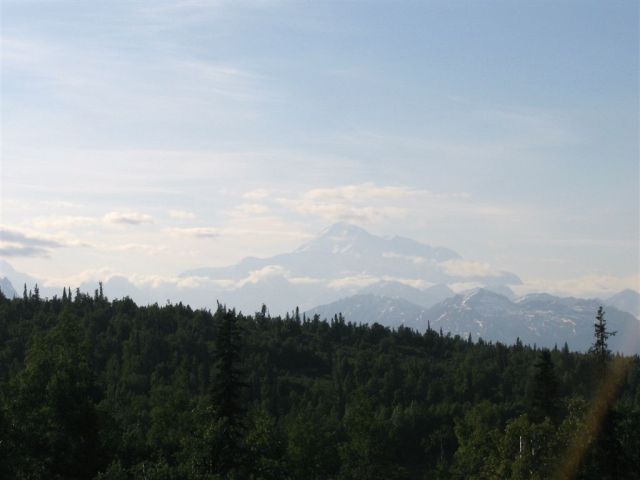 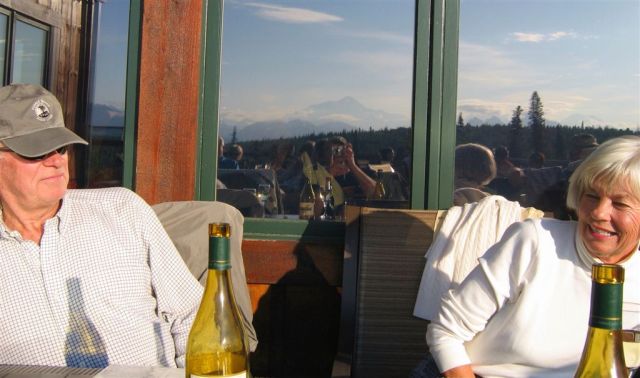 [Howie and Donna part company allowing a clear refective shot of the mountain and the photographer.]

[The Cub Reporter finds the ideal spot from whence to ply his trade.] 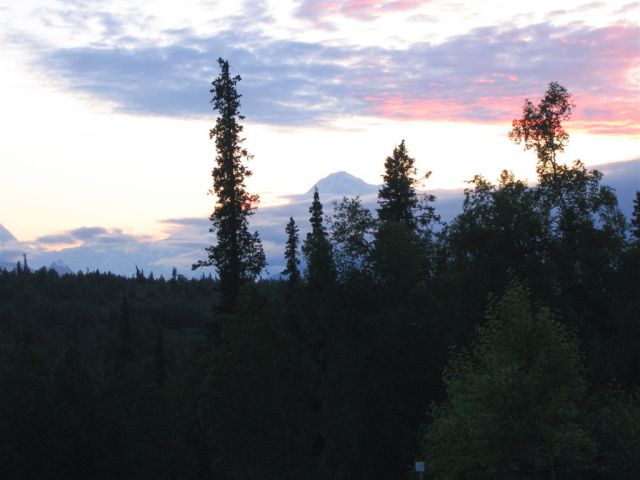 [I was really, REALLY concerned that I would fall asleep and miss this once in a lifetime opportunity.  But I made it – I got the above four shots of Mt. McKinley at midnight on the summer solstice!]

[What we were looking at from the deck.]

[Then to Talkeetna, where I tried to sign up for a climb (not!).] 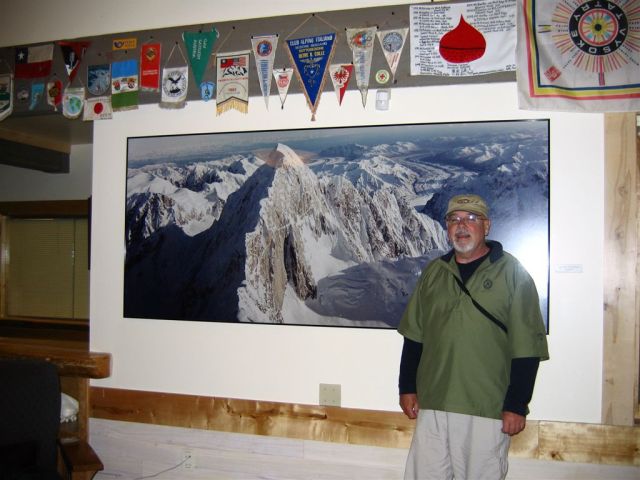 [Here’s the report I filed at the time:  “It was May, I believe, 1978 . . . I led a daring team of risk takers, the Lake Darling Daredevils, up the dreaded north slope, a/k/a Lutefisk Gulch.  The weather was beautiful at the outset – Sven even noticed a sunburn and how it was creating a bad golf sock line.  But at the 15,000-foot level, the climbing party began to complain about a shortage of smelt and krumkake.  At 17,000 feet, Ole and Lena turned back – something about a rash caused by woolen underwear.  Shortly thereafter, altitude sickness hit the remaining team – cerebral edema was a real threat.  It was at this point we all later recalled running into three yetis on the mountain – one was peddling sub-prime mortgage loans, and even had all the paperwork.  She was cute, in a hirsute sorta way.  We’re not sure if we made it to the top or not – one of the sherpas had extraordinary foot odor that created a light-headedness among the group.  We don’t recall how we made it back down, but at the bottom we discovered Lars and Irma had severe frostbite.  Lars subsequently lost three toes on his left foot as a result, but he said not to worry – it corrected his previous tendency to always list to the right.  We’ve talked about trying to climb the mountain again – Tollef has had second thoughts about his mortgage loan.”]

If only you could put this creative talent to good use……….. ~ Frank L 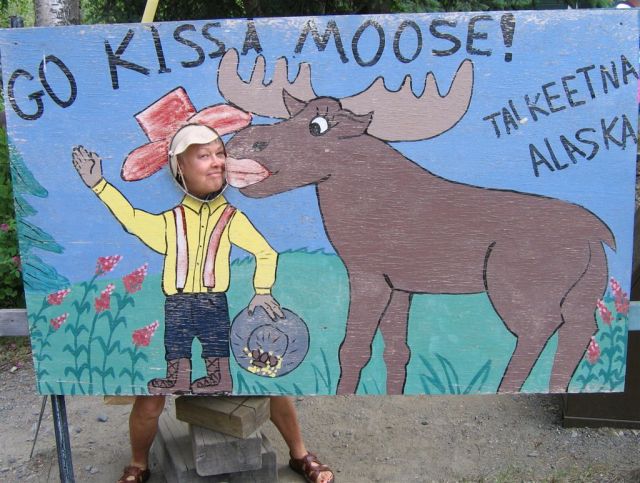 [Ruthie finally gets to kiss a moose!]

[Then it was a 5-hour rail trip, through the now famous Wasilla, through Anchorage, along Cook Inlet, to Whittier where we found our boat.] 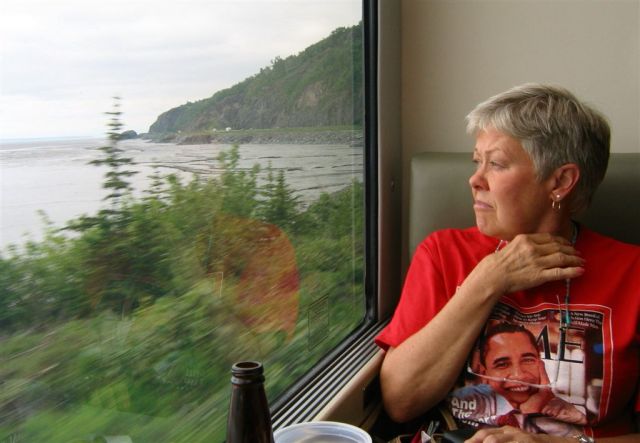 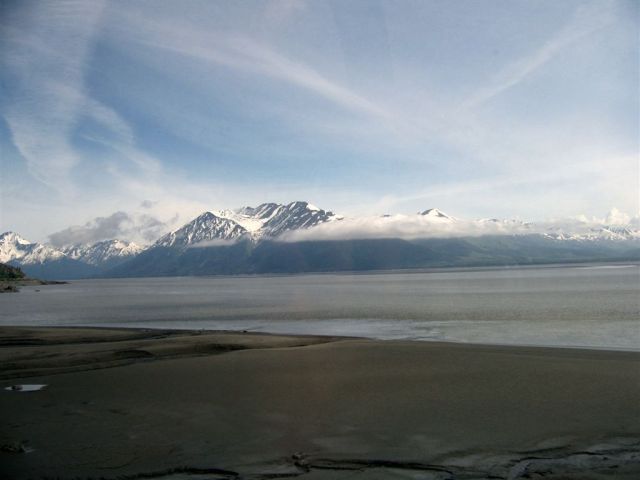 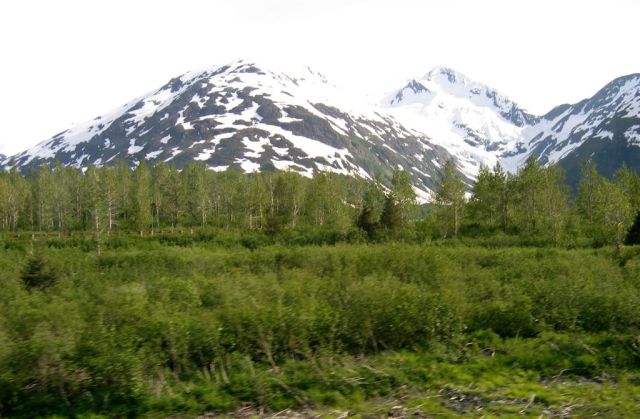 [“Does Dave have any more lupine garnish?”] 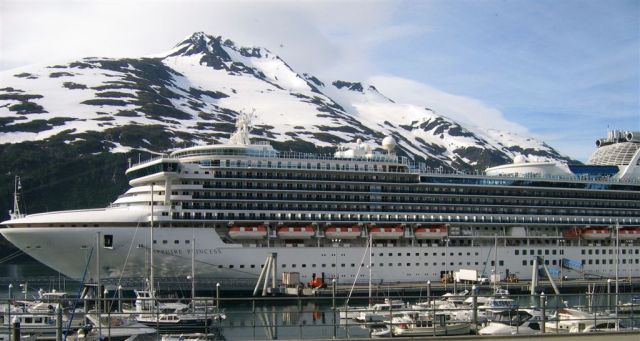 [Just slightly larger than the Moby Obie.  But then this thing couldn’t negotiate the Darling-Carlos channel!]