January 17, 2012:  The Mississippi Valley Delta Devils beat Southern last night in Itta Bena [Mississippi], and I was at Grambling Saturday night, so the 347 D-1’s are complete….now I can turn to solving the world hunger problem.
We tried to see this [Tyus] Jones kid last summer at the Pulley league games, but he never showed up despite being on one of the rosters. My bold prediction is that Tubby won’t get him, given his shaky track record with not getting along with his point guards (Rondo and Devoe Joseph being the most publicized). ~ Basketball Dan

There is only one thing that could have upstaged the most important basketball game in the state last night.  And that is the above report filed by Basketball Dan.  If you are not yet a fan of Basketball Dan, it behooves you to become one [type “Basketball Dan” in the blog’s “search” box].  Monday he completed what I’m pretty sure has never been accomplished before – in Itta Bena, Mississippi, his goal of attending a men’s basketball game at all 347 Division-1 colleges and universities reached its denouement.  The Great One did not do this out of a sense of personal aggrandisement – in fact, he turned down an oppportunity to be interviewed by Minneapolis StarTribune sports columnist, Jim Souhan.  He did it because . . . it was there!

The Game.  Gretchen and Don Nelson joined us on our trek to Fergus Falls last night to see the match-up between the No. 1 (Fergus) and No. 6 (Alex) ranked teams in Minnesota girls’ basketball, class AAA.  It has been quite some time since we partook of a road trip, thus was the magnitude of this game.

We began with a lovely repast at Mable Murphy’s – a petit filet, hashbrowns, a nice glass of cab . . . now, where were we?  Oh yeah, we arrived at the school an hour before tip-off – plenty of time we thought, plus we could watch the JV game.  The parking lots were already packed!  From our finally discovered spot in Lot ZZ, we were able to catch a dog sled back to the school.

[“Not another Kardashian sighting?”]

We walked in on the JV game about halfway through the 2nd half – our only twice defeated baby birds were down almost 20 points!  What could have happened?  Right away, we could see the Otters have another tall, good point guard coming up.  But then the baby birds started to do what baby birds do – we turned the game into a basketball version of It’s a Mad, Mad, Mad, Mad World.  Every Otter who touched the ball was immediately double or triple-teamed.  We all but caught up at the end – and if we had made our free throws???  [Reminder to the team:  Your blogger is 64, bald, fat, near-sighted, with bad feet, and yet this year managed to make 36 free throws in a row.  You can do it!  They’re free!]  The final score was 47-42.  Karly came out at one point with a bloody nose – there was also bloodletting in the varsity game. 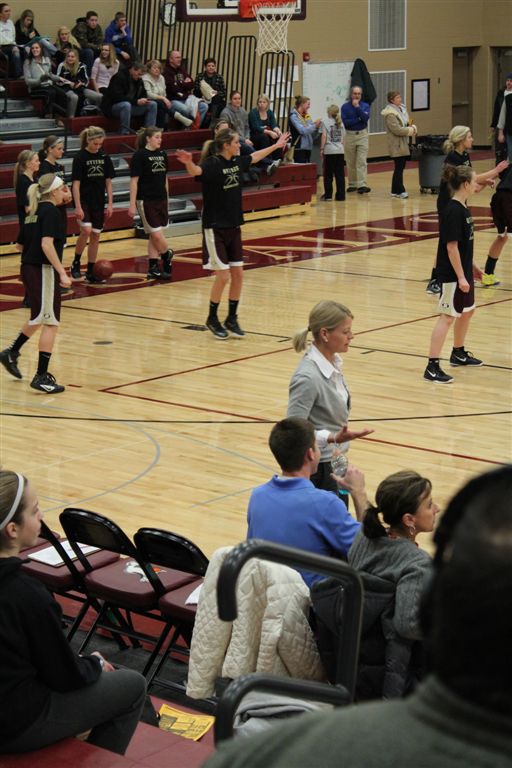 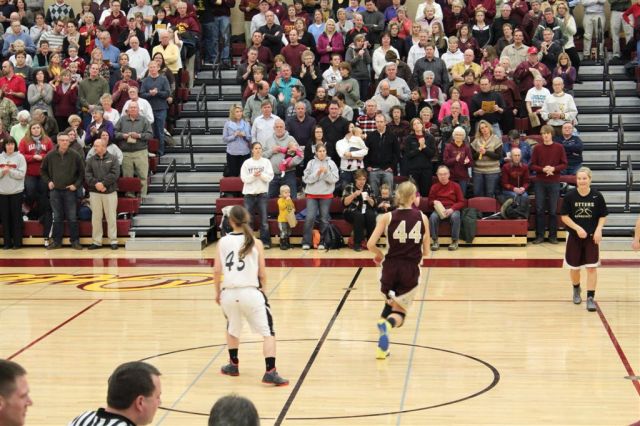 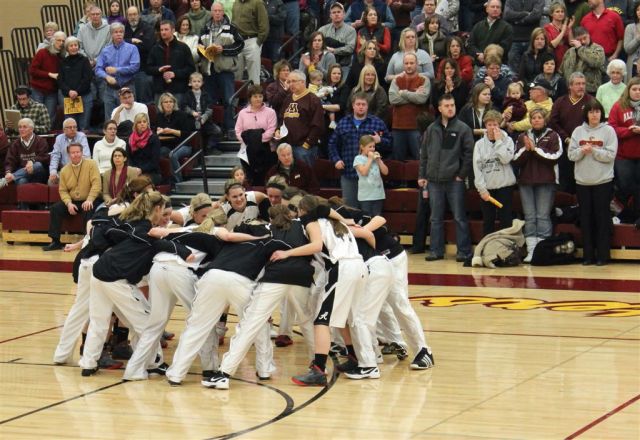 I never had a good feeling about this game.  The Otters had everything going for them.  Particularly, the revenge factor.  This is the same team we beat for the section championship last year.  And when Alex came out for warm-ups, Kalli was not only wearing her face mask, but also a brace on her shooting hand – not a good sign.  Kalli scored 4 of our first 6 points, but she really wasn’t able to play much. 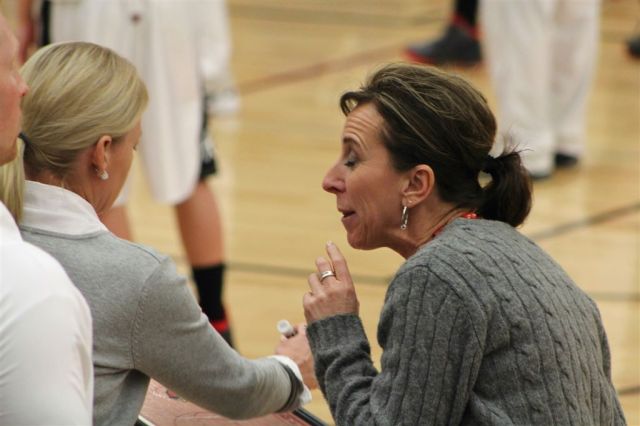 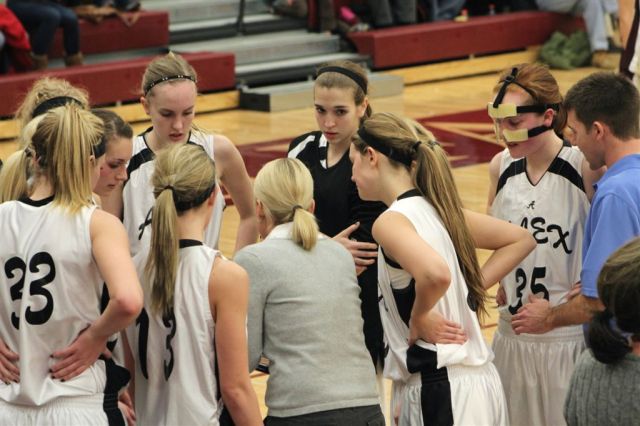 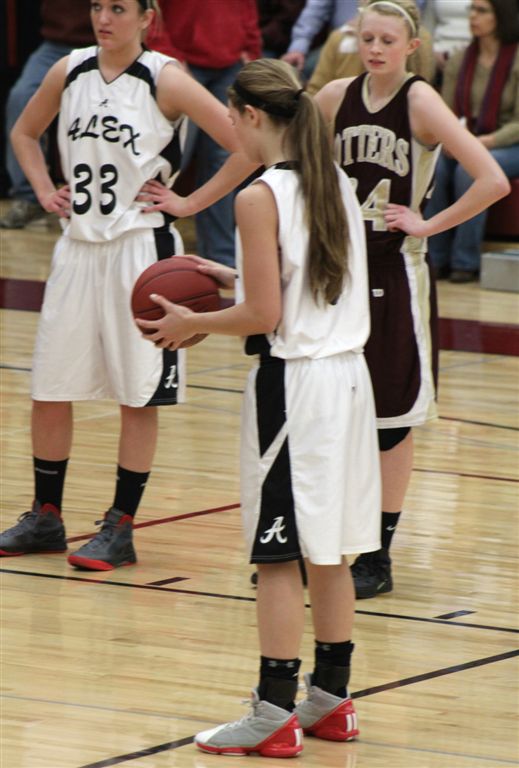 [Amanda C was good at the stripe all night.] 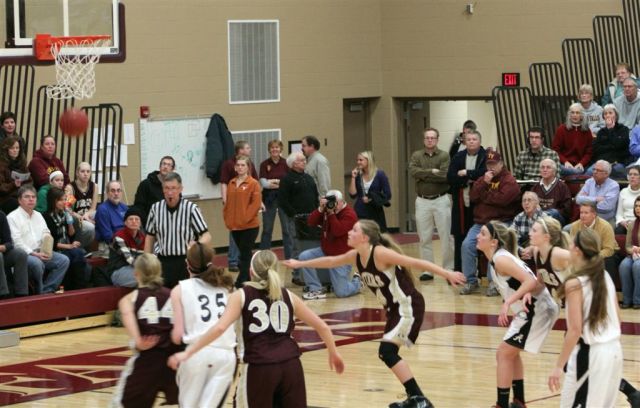 [Although hardly an expert in such things, I noticed several Cardinals had trouble keeping all their tresses within the confines of their headbands/ponytail thingees?  Is it weather related?  It was a cold night?] 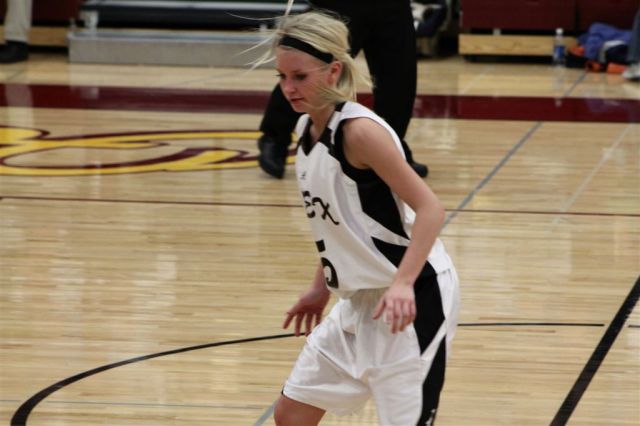 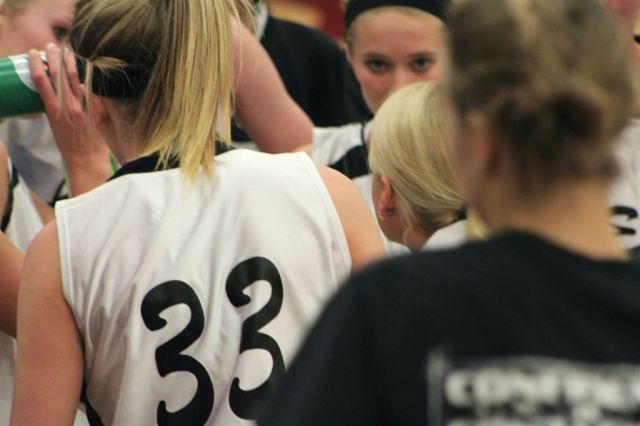 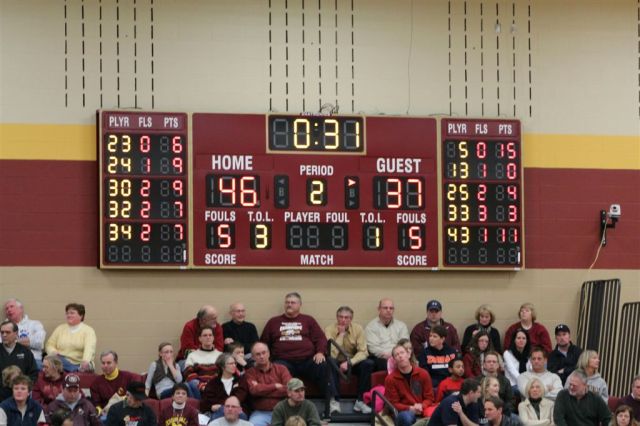 [A ‘3’ here would have made it really interesting!] 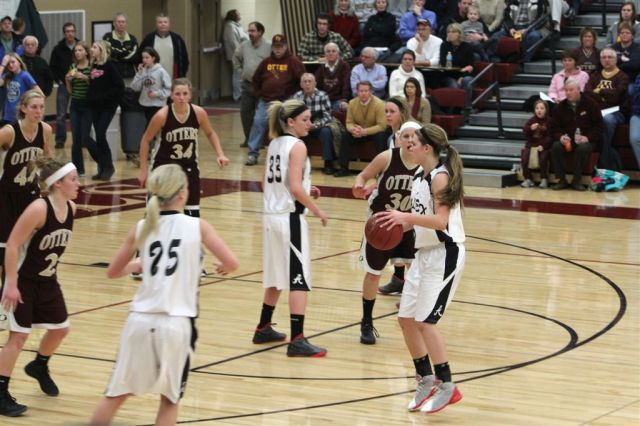 On this night, the Otters were the better team – they are decidedly bigger and stronger than we are, so it really hurts not having a healthy Kalli to help offset some of that.  The Otter center has always been listed as 6’2″, though when she stands next to our 6’1″ Whitney, she seems more than an inch taller.  She must have had 10 blocked shots in the game – and good for her.  And good for the Cards for continuing to take it to her – but the refs weren’t making those anicipatory foul calls on attempted shot block attempts last night.

The Otters jumped out to a 21 – 6 lead early in the game as we got off to another slow start.  So, we spent the entire game trying to catch up.  Several times in the 2nd half we pulled within 6, but then Otters would stretch it out to 11 again.  Amanda was our best all around player last night with 15 points – and made all her free throws as I recall.  LT had 14 and two bloody knees.  Fergus had great balance – all five starters had about 10 points – and they can score inside and outside.

We play them again at home the last game of the regular season.  We can beat them, if:  Kalli is healthy and can play physical, we jump out to the early lead (so they can’t rest their big people as much), we can’t let it become a halfcourt game – we can’t beat them in such a game, their point guard (a 5’10” sophomore, physically talented, and tall enough to not be bothered as much as others by our traps) always GOES TO HER RIGHT – make her beat you going to her left, make them foul us – then make our free throws!

As is our modus operandi, we somehow ended up driving on about 10 miles of dirt road on the way home after the game.  We don’t know how, we don’t know why?  We eventually reached Underwood.  One cannot otherwise get to Underwood unless it is one’s ultimate destination.  But from there, we were eventually able to discover the interstate and made it back home none the worse for wear.

Once home, we had the following report from “Robo” regarding the girls’ home hockey game:

As I was the only Super Fan in attendance I guess I have to file a report. So here it is.

Goals – DelCastillo from her linemates; Bartels from Kragenbring and Kopischke; Kopischke and Bartels again-both unassisted; Iverson from Illies ;and Iverson, again unassisted.

River Lakes scored two goals in the last 30 seconds of the game. The goals were scored 6.9 seconds apart.

Thank you, Robo – a new blog stringer!  The girls are on quite a roll right now, and I believe have claimed 2nd place in the conference and are probably in the lead for the top seed in the section.  The boys’ hockey team also beat River Lakes last night – 4-3.