A Blast from the Past XII 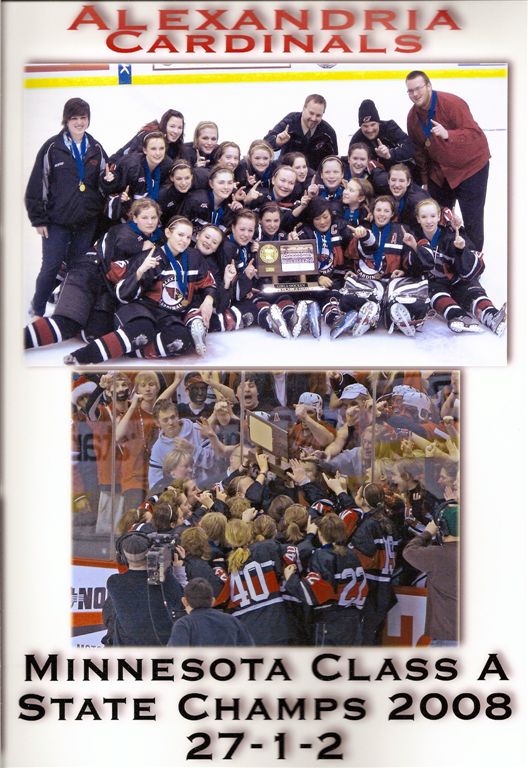 [We have previously highlighted (The Background) the girls’ hockey team’s run to the state championship in the 2007-08.  Here are the reports on some of their early games that season.]

[November 15, 2007 – 1st game of the state championship season]  After player introductions, the game began – and 14 seconds (!) later Abby Williams scored the first goal of the game.  Abby, the leading scorer in the state last year with 102 points, went on to score three more goals in the game  – and with two assists, recorded a 6-point game.  Twice she had breakaways, which always bring the crowd to their feet – she scored a beautiful goal the first time, the second time she was tackled from behind which led to a rare penalty shot which she converted with a nifty backhand [I was so caught up in seeing my 1st penalty shot, I totally forgot I had video capabilities in my pocket.  Arrgghhh!].  Her talented linemates, Kathryn DelZoppo, who has played on the same line as Abby since the 7th grade, and sophomore Michelle Anez, each scored on terrific individual moves.  Senior defenseman Caitlin Murphy and sophomore forward Ally Nielsen rounded out the scoring.

Abby obviously was named player-of-the-game and was on the radio with Dave Harris after the game.  They both commented on the size of the crowd – the Super Fans presented their largest group ever to include the Oberts, the Annens, the Rogosheskes, the Dittberners, Dave Hoyme . . . and newcomers Julie and Mike Shaughnessy and Roger Riley, all of whom are recent retirees to Alex from The Cities, and all indicated they will certainly be attending future games.

The Super Fans were delighted to note that this team has more depth than any prior team.  Tonight 11 forwards and 7 defenseman all had ice time, and it’s incredible the number of players who are still in junior high – a 7th-grader is a starting defenseman (as is the back-up goalie – when the cub reporter was in the 7th grade, his mother had to check him to make sure his shoes were on the right feet).  And this year’s team is playing a schedule that includes road trips to Grand Rapids and Hibbing over the Thanksgiving weekend, and to Breck during Christmas week.  After that, the team should really be prepared to make a strong run at the state championship – and we’ll be with them all the way!

[November 28, 2007]  The Alexandria girls’ hockey team beat the Brainerd Warriors, 5 – 1, last night at the RCC.  Abby Williams opened the scoring on a break-away backhand a little over a minute into the game – Roger Riley, new Super Fan, was a slightly late arrival and when advised he missed Abby’s goal responded with something like, “It figures.”

We thought the Cards looked a little tired after their 2-game weekend foray into the Iron Range, but they held a 3 – 0 lead with about 6 minutes left in the game.  Then Brainerd scored on a shot that appeared to deflect off a defenseman.  Well, you could see that the Cards were really upset about that turn of events – liked somebody kicked their dog – so they turned on the afterburners and scored two more goals before the game ended, a kind of “take that, you dastardly Warriors!”  You can tell the team is justly proud of their defense – they prefer shutouts for “Roadblock” Justice – they have only given up three goals in their first five games.  Anyway, Abby had two goals for the game, and Ashley Holmes, Kat DelZoppo, and Ally Nielsen (her mom and grandparents sit with us, yet show no ill effects from doing so) also scored.  Next up – this Thursday at home against the mighty Spuds from Moorhead.

[November 29, 2007]  Tonight’s game against the Moorhead Spuds was what we in the sports journalism business call a real “pants-wetter.”  The Cards finally prevailed, 3 – 1, in a match between two very good teams.  The Spuds came out early and rocked the Cards back on their heels – they put 23 shots on goal in the first period, about twice as many as the Cards usually give up in an entire game.  Thanks to the stellar play of goalie Danielle Justice, the Cards were only down 1 – 0, a power play goal, after that period.  Danielle, a/k/a Roadblock, continued her great play (she was star of the game) the rest of the game and the Cards gradually worked their way back into it – by the third period it seemed we wore the Spuds down a little bit.  The comeback started with a short-handed goal by Ashley Holmes in the second period, then Abby Williams put the Cards ahead with an unassisted goal.  In the third, the Cards scored their final goal on a length of the ice dash from Kat DelZoppo, to Abby, who fed Michelle Anez streaking in on the left side in front of the goal.  The Cards then hung for some anxious moments at the end of the game when the Spuds pulled their goalie (who also made some outstanding saves).  Cards coach Mitch Loch said on the radio after the game that the Spuds were the best team they’ve played – which is kind of frightening for the future because the Spuds are a very young team with only four seniors.  The Cards have now finished the first 6 games of their killer opening schedule with an excellent 5 – 1 record.  Next they travel to play St. Cloud Tech on the big ice at the National Hockey Center on Tuesday.  The Super Fans (who were in attendance in record numbers tonight) plan on a road trip for that game.

[December 22, 2007]  In a rematch of last year’s state championship consolation game, won by Breck 5-4 in overtime, the Alex Cardinals girls’ hockey team, ranked No. 5 in the state, defeated Breck, ranked No. 3 in the state, 2 – 0, at the Breck School Anderson Ice Arena in Golden Valley.  As the score would indicate, it was another terrific game by Card goal tender, Danielle Justice.  Despite having a significant edge in shots, Breck was unable to get one by “Roadblock.” The Cardinals scored in the first period on a shot taken from the point by 7th-grade defenseman, Shanee’ Herd, that was tipped out front and into the net by Kat DelZoppo.  Michelle Anez capped the scoring in the second period.  The Cards protected Danielle’s shutout by holding off a final Breck surge when they pulled their goalie late in the game.  Several college scouts were at the game checking out multiple players from both teams.  It was a terrific game from a fan’s standpoint.

Just because it was a road trip, and because it was in winter, we, of course, encountered inclement weather on our trip down to the Cities this morning.  By the time we hit St. Cloud, there were multiple cars in the ditch and several accidents.  We just made it to Golden Valley Country Club in time for lunch with the HQ, and her grandson, Willy, and our kids and grandson arriving from Indiana.  Alex Super Fans, Carol and Dave Dittberner also showed – after going to a Mahtomedi game last night to see their grandson, and then were going to the Gopher basketball game tonight where the Alexandria Aces were performing – now that’s being sports fans!

[January 23, 2008]  In the penultimate home game of the regular season, the Alexandria Cardinals held off the Willmar Cardinals by the score of . . .  12 – 1!  The only suspense was in seeing if Roadblock could get another shutout, but Willmar, to their credit, kept playing hard and managed to score with about 4 minutes left in the game.  The third period was played on running time, and I’m not sure if the first line even played at all in that period.  The Cards (Alex, that is) moved their record to 17-1-2 for the season.  Tonight’s scoring challenges the 60+ year old mind of the Cub Reporter (even with the able assistance of the indomitable Ruthie): We believe Abby Williams had 4 goals, Nikki Ecklund and Michelle Anez had 2 goals each, Kat DelZoppo, Breanna Lind, Ally Nielsen had goals, and 7th-grader Shanee’ Herd had her first ever goal – but that’s a lot of remembering and we wouldn’t swear to it.

Week long sleuthing by the Cub Reporter unearthed a direct link between the Class of ’65 and this team:  Samantha Ellingson, freshman defense, is a granddaughter of George Little; and the Lind sisters, Breanna and Brittany, junior forwards, are granddaughters of Dick Block.